*This blog contains spoilers; it gives a detailed account of the attraction*

Although it opened at the beginning of March 2020 at Disney’s Hollywood Studios, replacing long-time favorite The Great Movie Ride, not many guests were able to experience Mickey & Minnie’s Runaway Railway right away.  Walt Disney World‘s closure until mid-July delayed guests’ ability to experience this new attraction. Mickey & Minnie’s Runaway Railway is a trackless attraction that takes guests into a Mickey animated movie. It is the first ride at any Disney park that stars Mickey Mouse and friends.  The attraction features new technology that has been developed by Walt Disney Imagineering, which is referred to as “2 and 1⁄2 D”. The technology adds depth to 2D environments and makes them appear 3D-like with no need for guests to put on 3D glasses. Imagineers also incorporated projection-mapping in this ride (the same technology that allows Cinderella Castle to become a “canvas” for nighttime projection shows). The technique is used really well on the Runaway Railway to make a room that still appears to be very animated. Guests enter the building through a recreation of the Grauman’s Chinese Theatre. The exterior looks the same as it was for the Great Movie Ride (except for some signage). Guests walk a queue passing a series of posters of Mickey Mouse shorts that (we assume) have previously played at the theater. Fun Fact: If you recall the wallpaper that was part of the Great Movie Ride, it’s visible in a few places in the building. Like all Disney attractions, the Runaway Railway has a theme. This ride’s theme is Guests attending a premiere of Perfect Picnic, a new animated short film from Mickey and Minnie Mouse. Guests riding will see that a LOT can happen while riding a train through what Imagineers have termed “Runnamuck Park.”  It’s a family-friendly attraction with wonderful visual effects, a catchy theme song called “Nothing Can Stop Us Now,” and many surprises along the way. Chuuby is an orange and white bird created specifically for the Runaway Railway and can be seen at the start and end of the attraction. The ride has lots of details and tons of Hidden Mickey’s! There are many “Easter Eggs” (a message, image, or feature hidden in a film or video game). Some of the Easter Eggs that can be seen are: To begin the ride, guests board one of four cars behind a locomotive that Goofy is driving. As the train begins to move, guests enter into a cartoon world filled with amazing animation as well as screens that constantly change your field of vision and what you’re viewing. 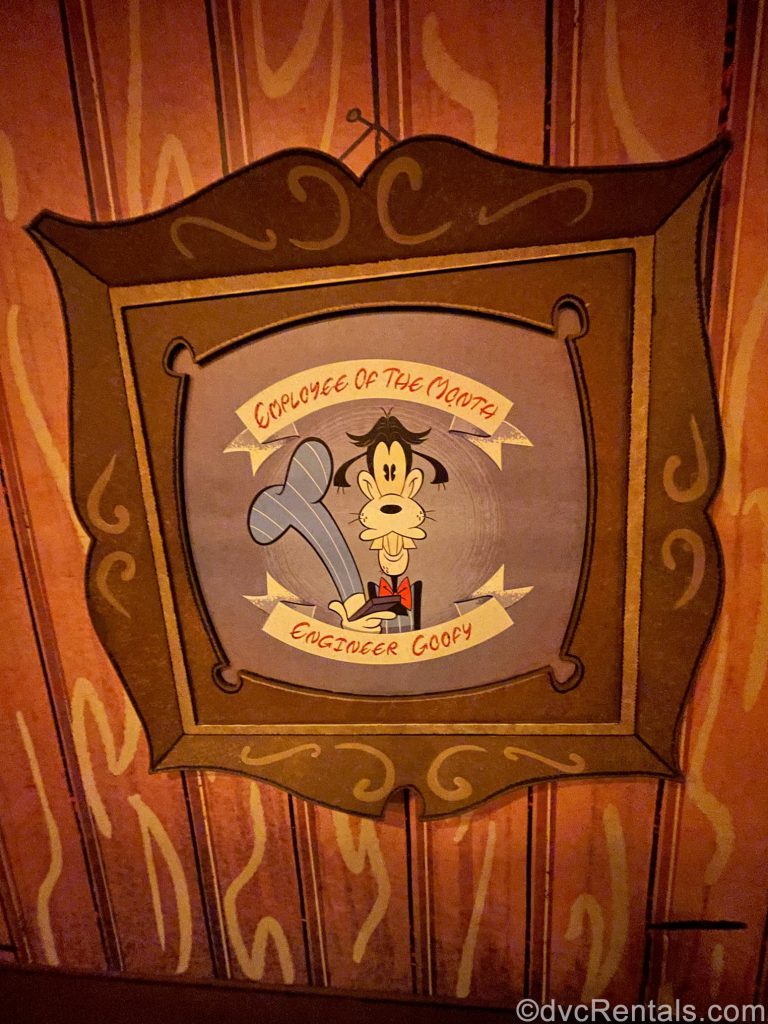 Goofy closes his window, and a switch fails, which makes the train separate from Goofy’s engine, which goes left, as the guests who have been “derailed” go to the right.  Mickey and Minnie witness this and are off to catch the train and save everyone. In the next scene, the train enters the desert where Mickey and Minnie ride on horseback, trying to round up the train cars, but are not successful. Next, we see a busy carnival with many characters guests will recognize. Donald Duck is selling hot dogs; Horace Horsecollar runs a popcorn cart; Huey, Dewey, and Louie are there, looking for fun; and Pluto is also in the scene, trying to find Mickey and Minnie. We see the two Main Mice flying by on balloons to try and save us, but before they can, a Twister logo on the side of the carnival’s wooden roller coaster comes to life, and everyone is carried away into a storm. 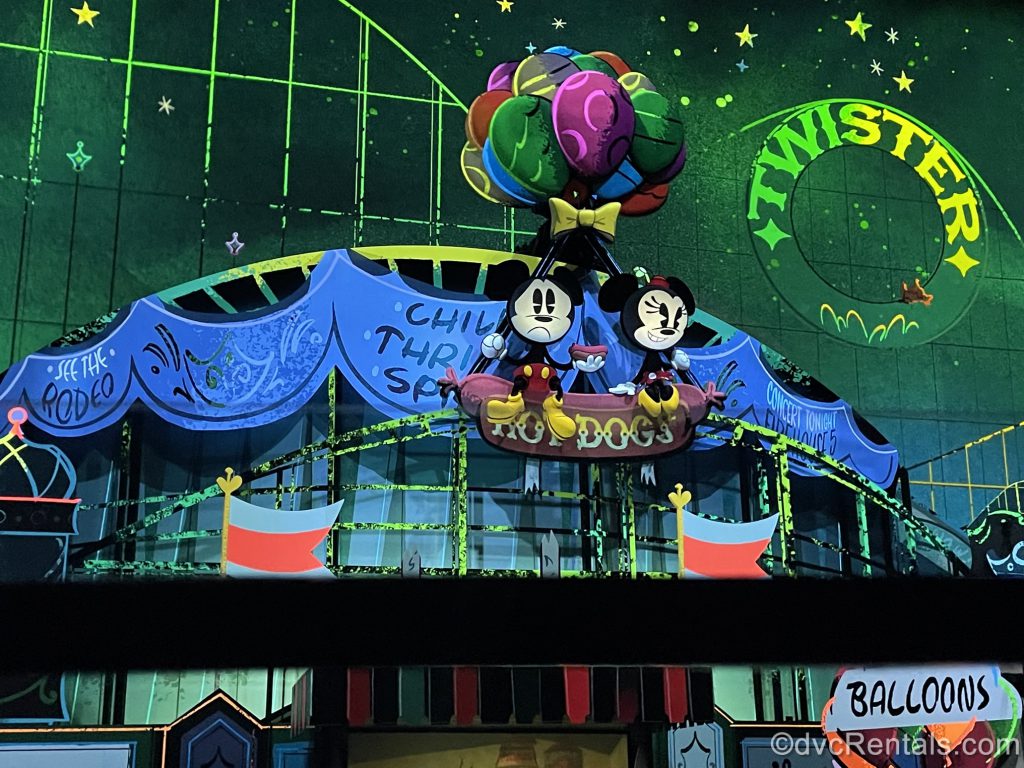 This takes the train, Mickey, Minnie, and Pluto to a tropical island where a volcano erupts. The eruption propels the train down a river and over a waterfall. The train ends up underwater, where it passes a submarine and various sea animals playing instruments. Next, the train is sucked into a sewer pipe and comes out into a lively city scene. Among other things, we see the character Pistol Pete doing road construction with a jackhammer that is shaking the buildings in the area.  After that, guest vehicles go into a dance studio with lessons from an animatronic Daisy Duck. First, the guest cars move to waltz music; at the end, they form a conga line and leave the room. We end up in a factory where Mickey and Minnie successfully stop our cars from being smashed by a machine.

They are able to pull a switch that causes the factory to shut down. Once the factory is gone, things are much better. We are now in a park, and at that point, the train re-connects to the engine Goofy is driving. 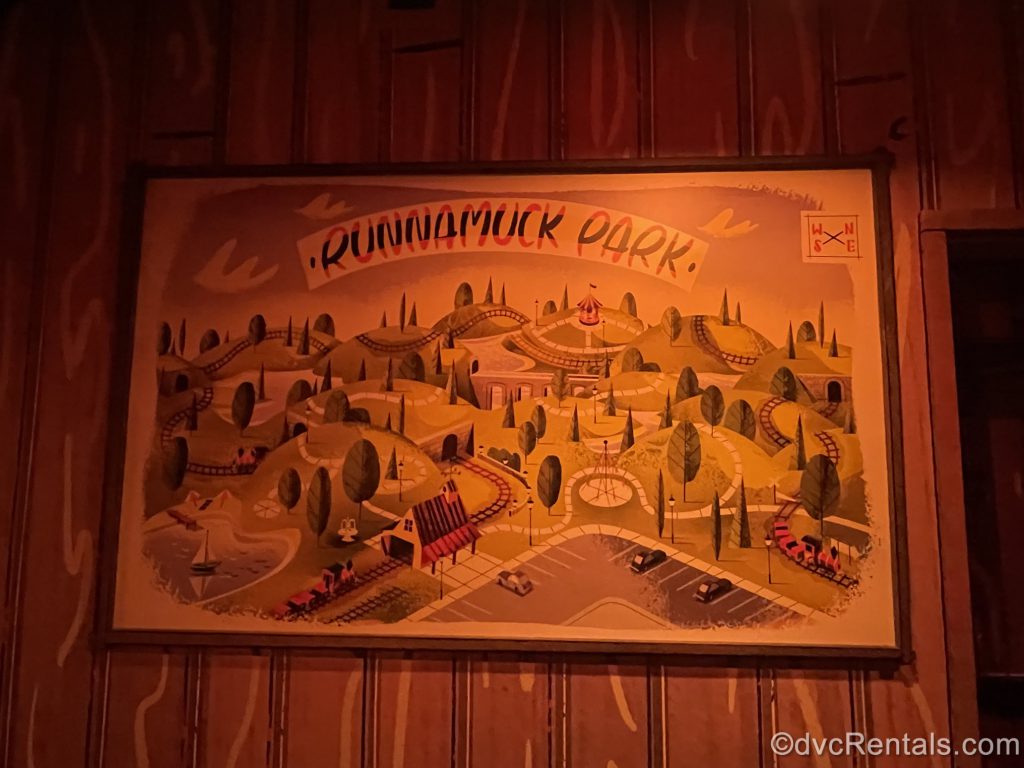 In the final scene, fireworks go off in the sky above guests. Goofy waves goodbye and closes the back window. As guests exit, they pass through the movie screen to return to the real world; above them, the sign “The End” is visible.  For your best view of the sign, turn around as you exit the attraction area but before you leave the building. 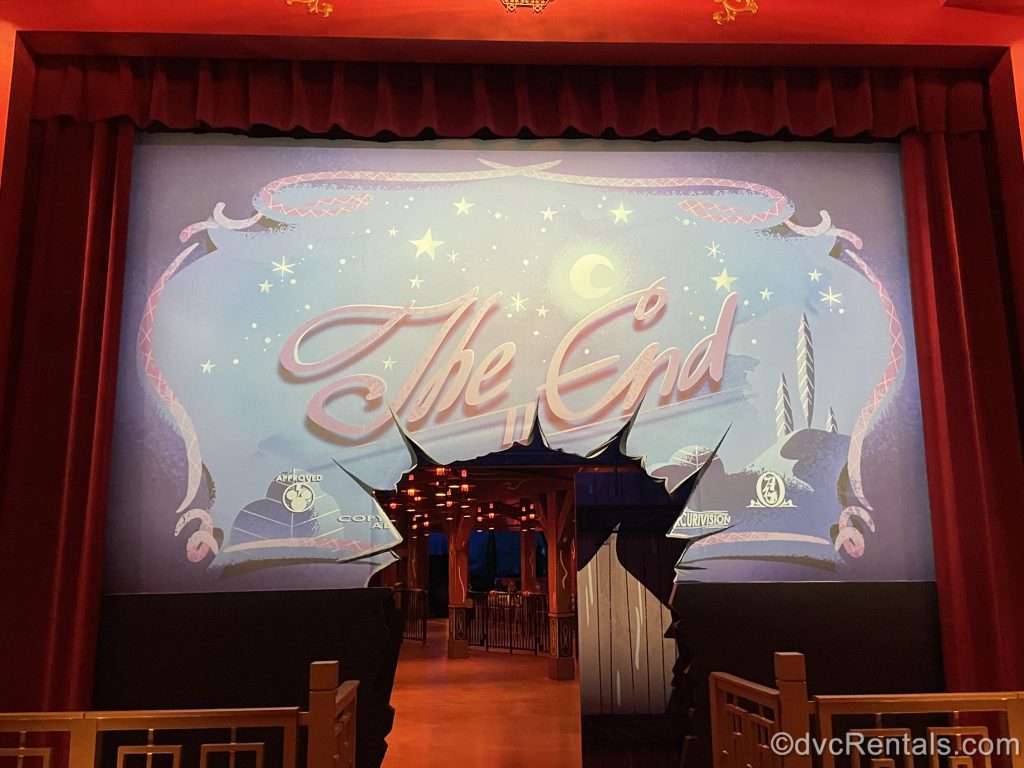 Other things to know about Mickey’s Runaway Railway:

There is plenty of merchandise available; look to your right as you exit the building for the kiosk. 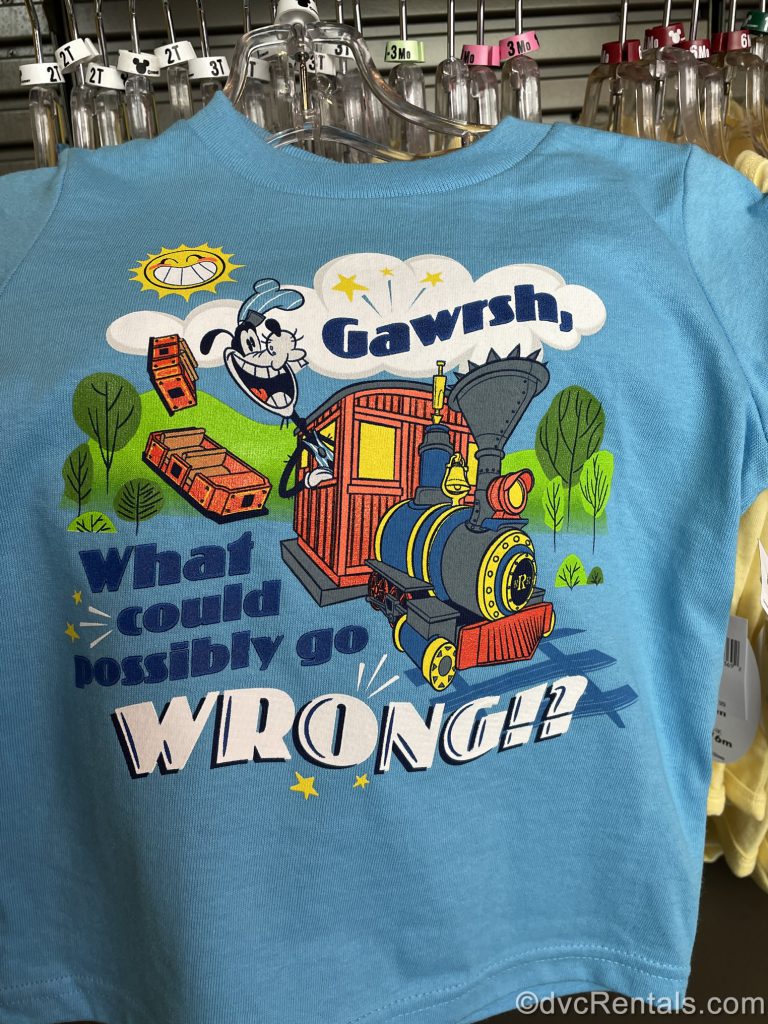 The ride is accessible for guests with movement limitations, but you must be able to transfer to the ride from a wheelchair. There is a separate wheelchair entrance.

There are no drops, but the ride does spin a bit in some places, and it definitely moves very fast. Additionally, there are a lot of flashing lights, and it’s rather loud.

Although it seems longer because there is so much to see, the attraction is about 5 minutes from start to finish.

It’s impossible to notice everything by only riding once. This attraction was definitely meant to be experienced multiple times and one that will have guests constantly discovering new surprises. To sum up, I think this attraction is a ton of fun.  Everywhere you turn, there is something different and exciting to see. I have been on it about ten times so far, and each time I make new discoveries. I have mentioned a number of them in this blog, but there are quite a few more. Once inside the building, the queue will keep you entertained, and it is air-conditioned, but if the line is long, guests will have to wait outside until they reach the building.  The line can get long, so if you would like a shorter wait, I suggest getting to Disney’s Hollywood Studios at park opening or soon afterward. 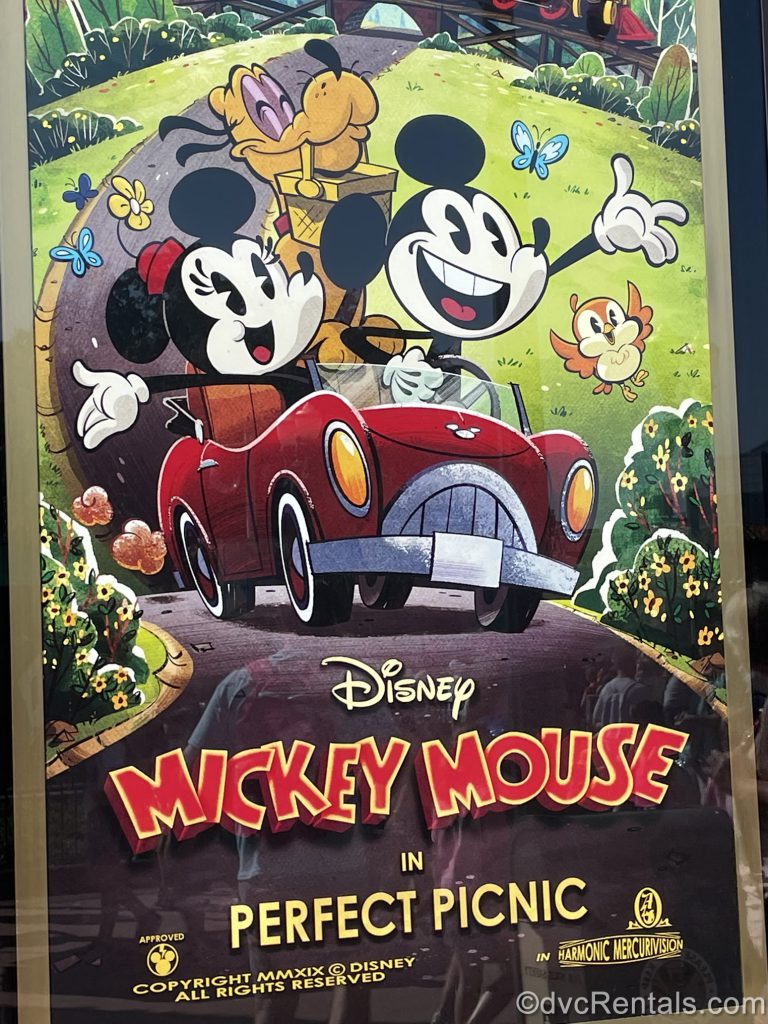