The opening of the New Fantasyland at the Magic Kingdom is very exciting news, but that’s not all that’s in store for Walt Disney World guests this fall. Several new entertainment experiences will offer guests a chance to strike up fun at a new bowling and entertainment complex, immerse themselves in the world of Jack Sparrow, become automotive designers, see zebras up close on safari, and much more. Take a look at what’s coming…

A preview date of November 19 has been set for the next phases of the New Fantasyland, leading to the Grand Opening on December 6. Adding to the big top fun of Storybook Circus, which is already in place, five more new experiences will round out the fun in this new expanded land: 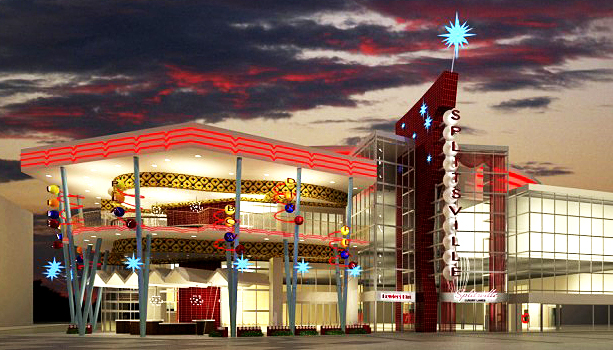 The age-old image of bowling is about to change with the opening of Splitsville, America’s Bowling Alley, at Downtown Disney West Side this fall.

Placing a whole new spin on the bowling experience with its emphasis on unique design, Splitsville will greet guests with upscale sushi bars, plush booths and dynamic decor overlooking the bowling lanes. Between strikes and spares, guests can feast on menu items that include hand-tossed pizza, fresh-rolled sushi, grilled mahi-mahi with “Voodoo” shrimp, and hand-cut filets, as well as alley-classics such as cheeseburgers and crinkle-cut fries – all served right at the lane.

A re-imagined, design-centric Test Track Presented by Chevrolet will debut in fall with a sleek new “Chevrolet Design Center.” Amid upbeat music, engaging media, dramatic lighting and a collection of Chevrolet concept cars and model vehicles, guests themselves will become automotive designers and create their own custom concept vehicles.

The adventure will then shift into high gear as guests buckle into their 6-person “SimCar” ride vehicle and put their design through its paces on the exhilarating hills, switchbacks and straight-aways of the Test Track circuit. Their performance testing complete, guests will move into a post-show area filled with special effects and be scored on how well their custom concept vehicle did.

“Phineas and Ferb & YOU: A Brand New Reality”

Starting this fall, Walt Disney World Resort guests will become the stars of “Phineas and Ferb & YOU: A Brand New Reality.” The virtual experience will allow guests to play with animated characters from Disney’s animated series “Phineas and Ferb.” The fun happens at Downtown Disney West Side, next to Bongos Cuban Café September 1 – December 1, from 2-9:30 p.m. daily.

Guests will be invited to stand inside the virtual experience set, and out of 20 randomly pre-determined animation segments, Phineas and Ferb, Agent P or even Dr. Doofenshmirtz will magically appear to play and dance alongside them. It all happens in a virtual (on-screen) 30-second experience. Then guests may visit a special website to download and share a complimentary souvenir photo of their starring role. Special Phineas and Ferb merchandise will be available at a nearby merchandise stand.

The Legend of Captain Jack Sparrow

The Legend of Captain Jack Sparrow debuts this fall at Disney’s Hollywood Studios, giving guests a chance to become immersed in the world of the four “Pirates of the Caribbean” films. Aspiring pirates will experience the story of Jack Sparrow like never before to discover if they have what it takes to join Captain Jack’s crew. This attraction will be included with theme park admission and will be located in Soundstage 4, former space of Journey Into Narnia: Prince Caspian.

Zebras will welcome guests on Kilimanjaro Safaris to their new home at Disney’s Animal Kingdom in fall 2012. A reconstructed savannah space featuring a new watering hole for live animals will offer an additional viewing opportunity at the end of guests’ expedition through Africa.