History of the Chinese Theater at Disney’s Hollywood Studios

I have written blogs here about Spaceship Earth at Epcot, the Cinderella Castle in Disney’s Magic Kingdom and the Tree of Life at Disney’s Animal Kingdom.  All of these are what Walt referred to as “weenies”- his nickname for attractions or landmarks that keep you engaged, and make you want to continue down a certain path. Disney’s Hollywood Studios, originally known as (and still referred to by some guests) as Disney’s MGM Studios was built with a weenie as well. The Chinese theater was the attraction meant to draw you further into the park when the Studios first opened in 1989. 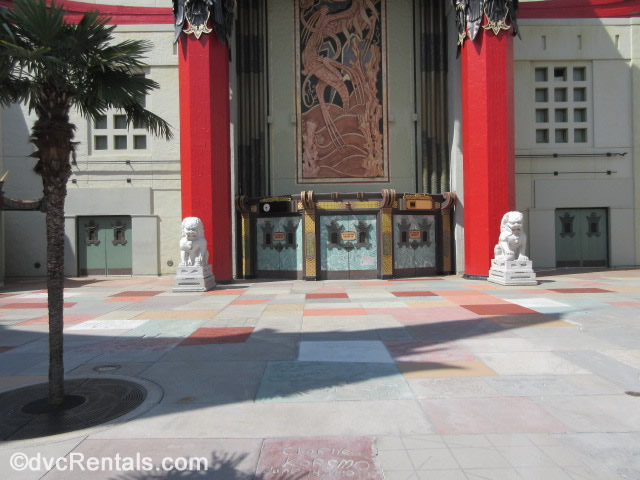 The Great Movie Ride occupied the building when it opened, and it remained until August of 2017. A new attraction, Mickey and Minnie’s Runaway Railway, is going to premiere next year in the Chinese Theater. 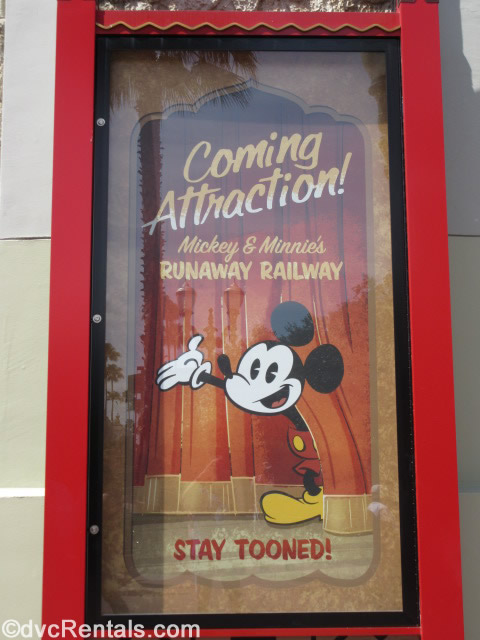 The theater has a lot of history behind it; let’s find out more about this beautiful building! 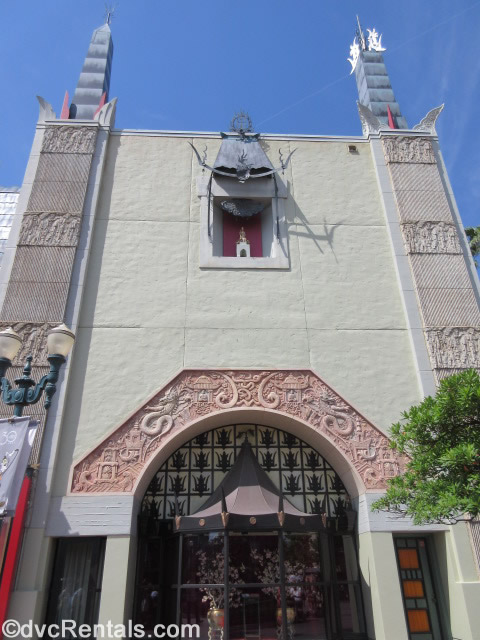 The theater at Disney’s Hollywood Studios is just about an exact replica of the original Chinese Theater in Los Angeles, California.  If you look at a photo of both side by side, you would be amazed at how similar they appear. (Google Grauman’s Chinese Theater and you can see for yourself 😊). 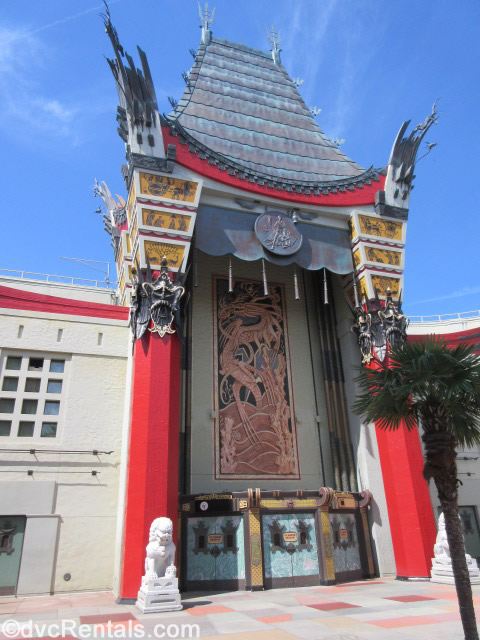 The original Chinese Theatre was (and still is) a real movie theater.  It opened May 18, 1927, with the premiere of The King of Kings, a movie directed by Cecil B. DeMille.  (There was a shout out to Mr. DeMille when the Great Movie Ride was running at Hollywood Studios. Just before the ride vehicle began its journey, you would hear a voice say “Ready when you are C.B.!” The C.B. they were referring to was DeMille).  The theater in California has since been home to many premieres, including the 1977 launch of Star Wars, as well as birthday parties, corporate events, and three Oscar ceremonies.  Tourists come from all over the world to see the signatures, footprints, and handprints of cinematic celebrities dating from the 1920s to the present. Many a tourist has placed his or her hands or feet in the concrete to see how they compare to their favorite stars.  There are a number of stories regarding who first came up with the idea, but it certainly caught on, and the sidewalk surrounding the theater soon became a virtual “who’s who” in Hollywood. 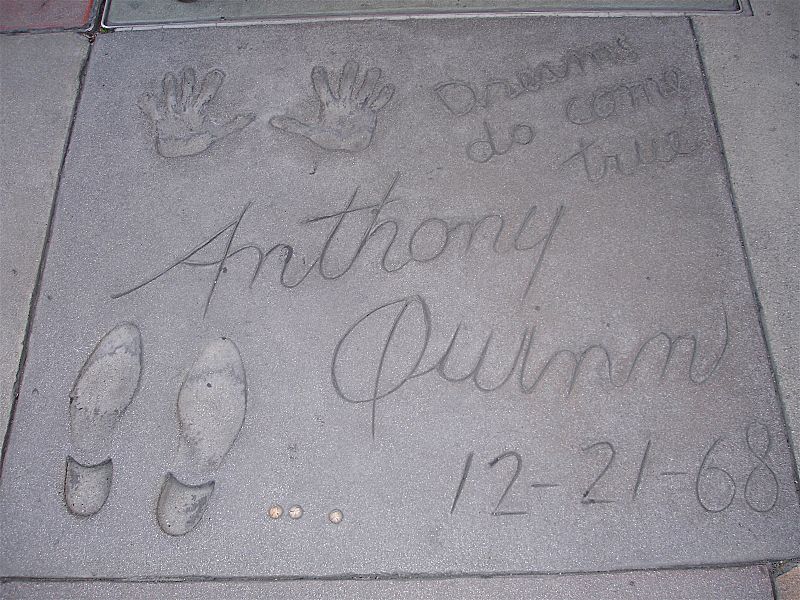 The original theater was built by businessman Charles Grauman and was known at first as Grauman’s Chinese Theater. The theatre was declared a historical and cultural landmark in 1968 and has undergone various restoration projects over the years. At one point it changed hands and became Mann’s Chinese Theater for a number of years, but in 2002 it once again was sold, and the original name of Grauman’s was restored.

Just as you can see at Disney’s Hollywood Studios, the original Chinese theater was built to look like a huge red Chinese Pagoda. Dragons adorn the theater exterior, and the main entranceway is “guarded” by Chinese Ming Dynasty lions, also referred to as “Heaven Dogs.” 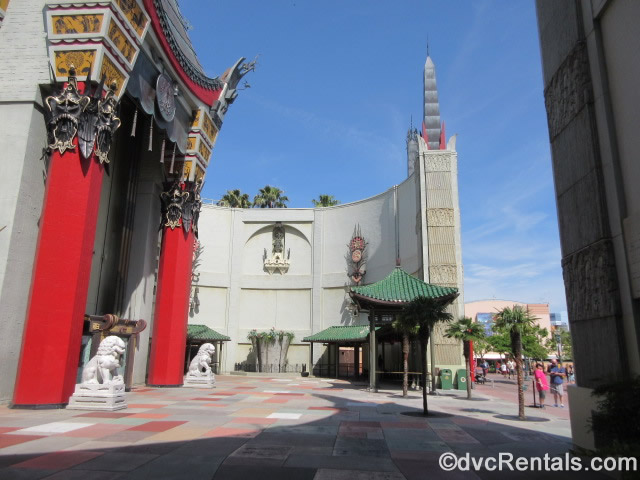 The roof was constructed of copper.  The total cost of construction was over 2 million dollars; a formidable amount considering it was the 1920’s.  At the time the original theater was built most people living in the USA knew very little about China. The theater was designed with the intention of giving Americans a bit of a feel of what China was like. 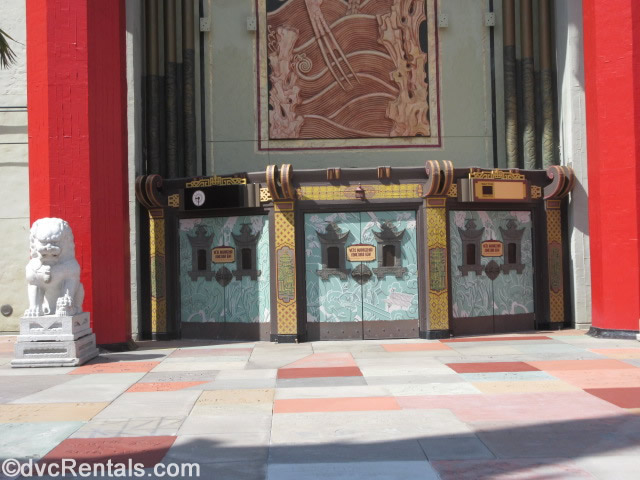 The entrance/forecourt of the theater contains close to 200 signatures, handprints, and footprints of well-known actors and actresses. Douglas Fairbanks and Mary Pickford (for those who may not recognize the names, they were a famous Hollywood couple from the ’20s) were the first to be honored in this way. Some stars added unique prints. For example, Groucho Marx added a cigar to his; Whoopi Goldberg has dreadlocks on hers, and Herbie the Love Bug has tire imprints!  Other prints/autographs have been added close to the area of the theater, some not as well-known as others.  The prints and autographs of the celebrities in the very front are considered to be the “gold standard.” All of those stars were well known in their day; most are still remembered today.

When Disney’s MGM Studios was being constructed, it was decided that the Chinese Theater would be a weenie for the park. 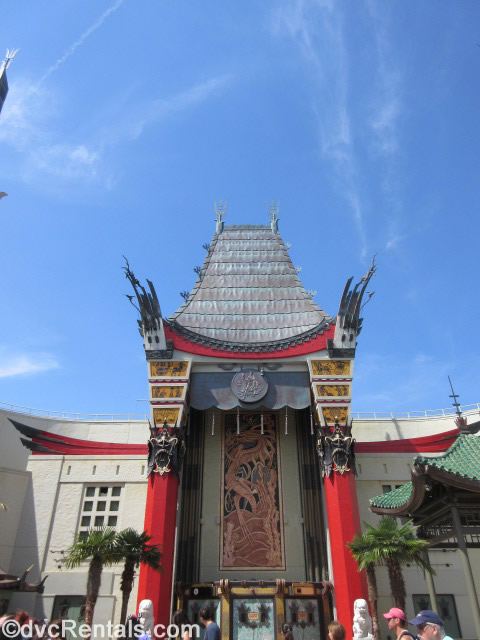 As soon as you passed through the gates and into the park, you would see the theater beckoning to you straight down the main street, Hollywood Boulevard.  As Walt Disney World is all about authenticity, in fact, the Imagineers who created the building used the actual blueprints that were used to build the original California theater back in 1927.  The Disney version is simply known as “The Chinese Theater.” 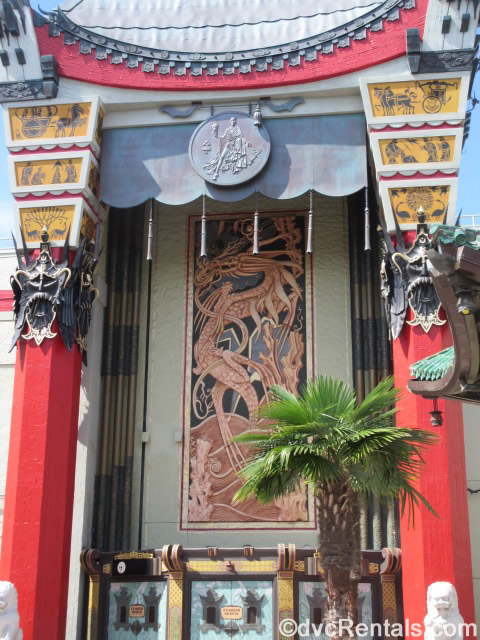 To the delight of some and the chagrin of others, a new weenie was installed in the park that blocked the view of the Chinese Theater in 2001. A giant Sorcerer’s hat, taken from the movie Fantasia, was erected directly in front of the theater.  The hat was basically a merchandise shop concentrating on selling Disney pins. For many of those whose first experience was seeing the theater, it was very sad to have it blocked. For others, especially those who never saw the original way the park was built, the Sorcerer’s hat was a better representation of Disney.

In 2015 the hat was removed, and the theater once again was visible upon entering Disney’s Hollywood Studios.  Currently, there is a stage with a Star Wars show blocking the theater, so at this point, there is no weenie at the park.  The stage may or may not become a permanent fixture; there is no definitive information available at this time.

As mentioned earlier, the theater looks amazingly like the original in California. Lions guard the main door; the pagoda looks the same; there is a “ticket booth” that is just like the one in Hollywood. 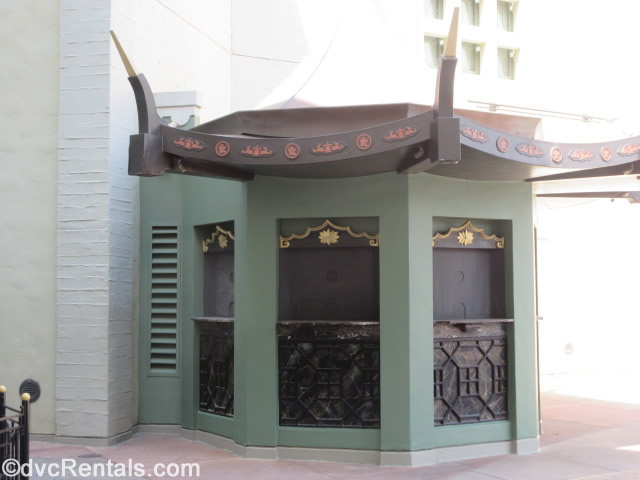 And what would the theater be without footprints, handprints, and signatures?  From 1989-1995, many stars were happy to add themselves to the concrete in the forecourt of the attraction. On the park’s opening day, Mickey Mouse, Donald Duck, Minnie Mouse, Goofy, Roger Rabbit, and other Disney characters were immortalized in the pavement. 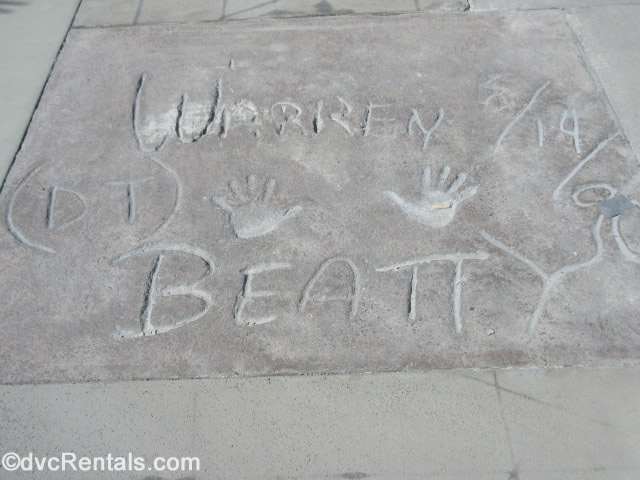 Other well-known stars were added through the years, including Bob Hope; Dick Van Dyke; Jim Henson (and Kermit!); Betty White; John Travolta; Sylvester Stallone; Annette Funicello (who simply wrote “Annette”);  Harrison Ford; Mark Hamill; George Lucas (as well as CPO and R2D2); Robin Williams (along with his then-wife Marsha and his first two children-his third was born later) and many, many more. Sometimes Disney would remove a “block” and replace it with another, as there wasn’t enough room for them all. 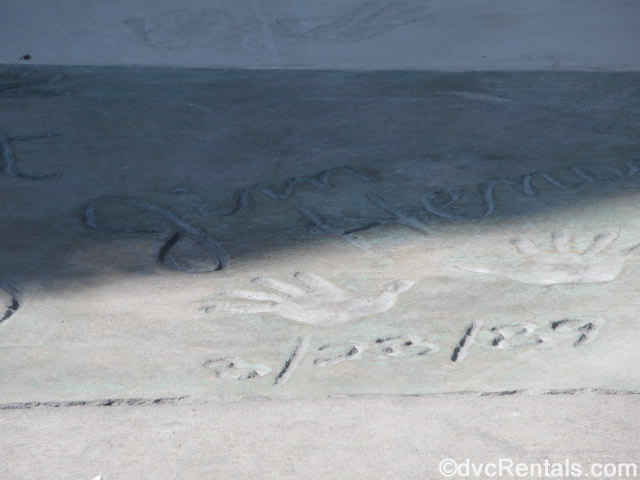 With the Runaway Railway attraction due to open, many guests wondered if the Chinese Theater would be changed or renovated. It has not, at least not the exterior. 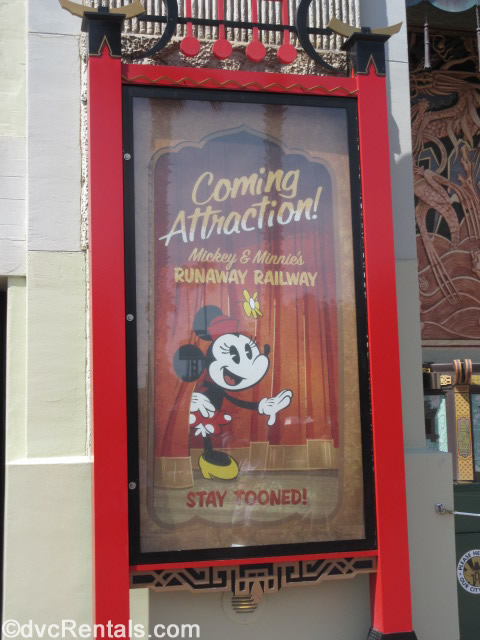 Although it is roped off while the new attraction is being created, you can still see the names and prints of many stars on the sidewalk in front of the attraction. The building exterior remains exactly as it was, at least for now. It’s a wonderful replica with all the attention to detail guests have come to expect from Disney. 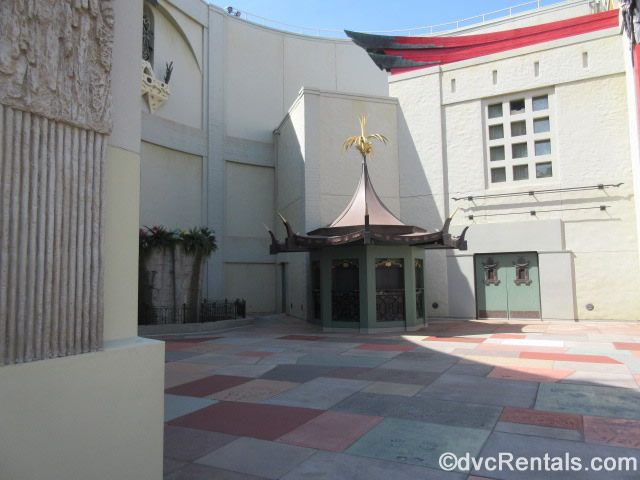 Although I must admit I will miss the Great Movie Ride, which was the only attraction that remained from opening day (Indiana Jones Stunt Spectacular and Star Tours opened a few months later, both are still there), I hope the new attraction will be fun and exciting. 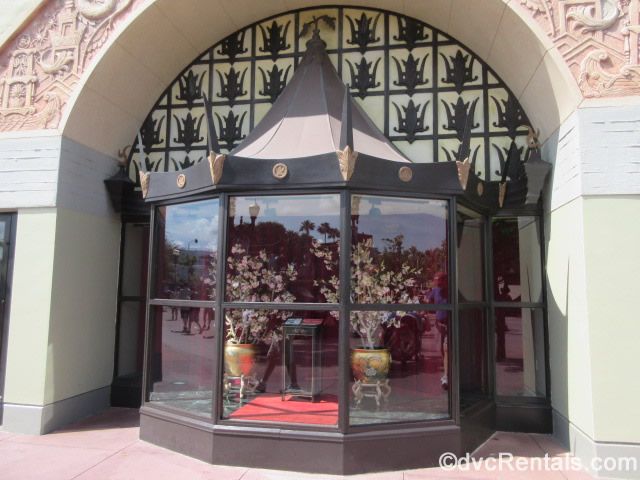