I am willing to bet that anyone reading this who has visited Animal Kingdom Park is familiar with the Kilimanjaro Safari attraction, Dinosaur!, Expedition Everest, It’s Tough to Be a Bug, The Lion King, and the Nemo stage shows, as well as the newest additions, Flights of Passage and Navi River Journey. Those of you with kids more than likely know about the rides in Dinoland.  But certain attractions are considerably less well known; among these are the two walking trails known as Gorilla Falls Expedition and Maharajah Jungle Trek.  Neither trail is very long or difficult to maneuver through. If you have passed on these experiences before I hope this blog will convince you to give them both a try next visit. 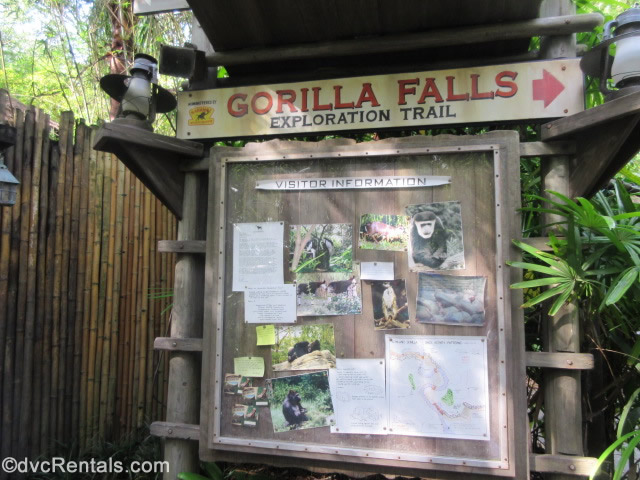 Let’s start with Gorilla Falls Expedition. This trail opened when the Animal Kingdom debuted in April of 1998.  It was renamed Pangani Forest Exploration Trail a few months later, and then the original and current name was restored in 2016.  The trail itself is 3/8 of a mile long, and along the way you will encounter many types of wildlife.  It is located just to the left of the exit of the Safari attraction in the Africa section of Animal Kingdom.  There is a huge sign with the name of the trail and images of gorillas as well as an okapi, a hippo at the entrance.  The trail is self-guided, and there are no Fast Passes available, just walk right in.

When you first enter there is a sign telling you not to: bring food inside; feed the animals; litter; leave the trail. This is for the safety of the animals as well as your own well-being.  Next, you will see a welcome sign that has a touching saying etched into it: “We do not inherit the World our parents left us- we only borrow it from our children.” There are other signs as well, some “real” like the one in the previous sentence, and some, although realistic looking, are clearly part of the Imagineering story for the trail.  For example, one sign says “Do not wander into the deep brush or forest—this area has Leopards, Cape Buffalo, and other dangerous animals (in reality neither leopards nor cape buffalo are anywhere on the trail, and of course all the dangerous animals are not allowed to roam free).  The same sign says “Nests, trails and recent kills will tell you animals are nearby.”  I don’t think I have to tell you that you don’t have to worry about coming across any “recent kills” on the trail (unless someone just swatted a mosquito 😊 ).  There are a number of interesting signs along the trail, some real and some imagined.  I suggest you check them all out; some are educational, some are fun.

One of the first animals you will see on the Gorilla Falls Expedition is an okapi. These are about the size of a small horse and are related to giraffes.  In addition to seeing a live okapi, this area has a skull of a giraffe next to one of an okapi, and a board with drawings that explains in detail how the animals are alike and how they differ.

Soon you will enter a building that has smaller animals, as well as reptiles.

There are snakes, lizards, tortoises, mice, and the very interesting naked mole rats.  The mole rats can be seen behind glass in a burrow they dug. They have made tunnels in the burrow and can often be seen scurrying around inside.  When I visited last week, there was one area in the tunnel full of baby mole rats; all snuggled together sleeping.  I must tell you that if you are not a fan of mice or rodents you might want to skip this. The naked mole rats are truly hairless, have buck teeth, and I think some people might find them a little creepy looking. I think they are fascinating, especially watching them tunnel. 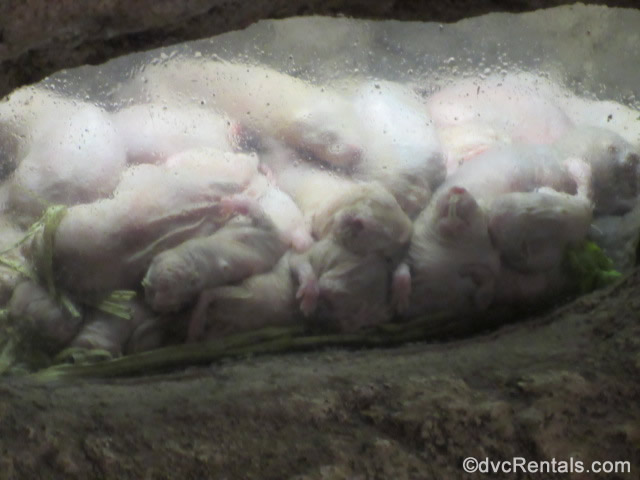 The next area you reach is the home to a number of beautiful birds. 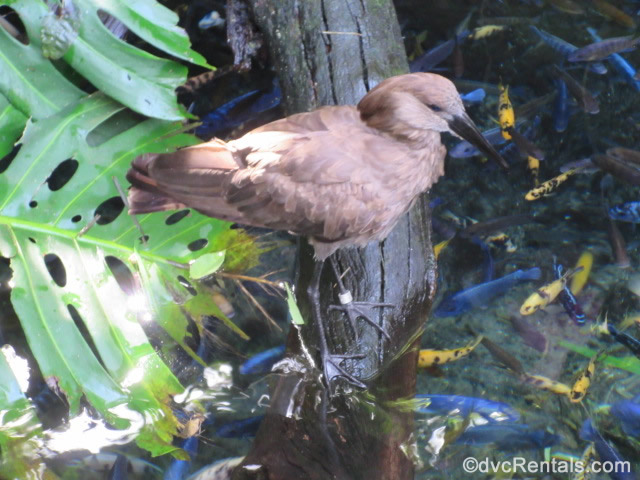 Guides (large and laminated and which must be returned when you leave the bird area) are provided to help you identify the various species. One of the coolest birds is called the Weaver Bird. These small sized birds were really busy when I visited.  They gather pieces of twigs and grass and literally weave them together to build a long oval nest with a large opening on the top. Weaver birds are quite pretty; they have very bright yellow feathers. 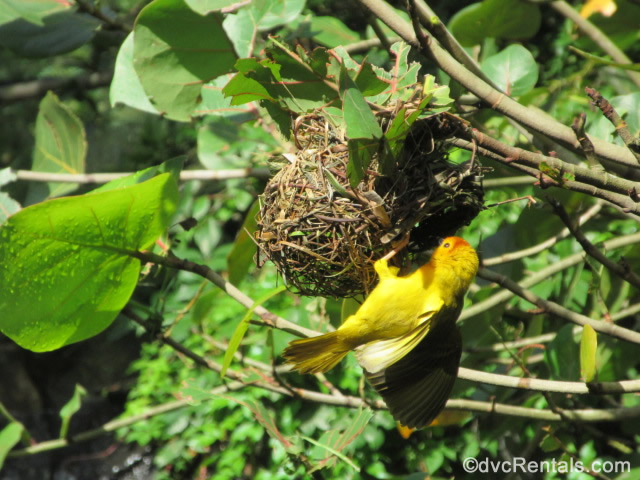 Continuing along, you will come across an area with zebras, and not long after that is a colony of meerkats. 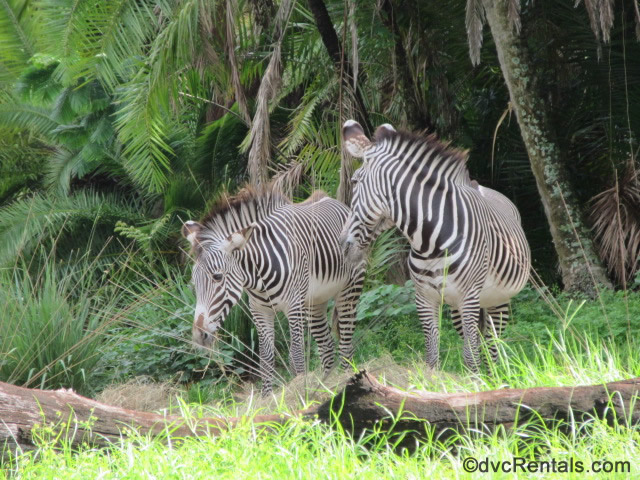 It’s a lot of fun to watch the meercats scurrying around doing their digging, as well as seeing them when they “stand” to get a better view. Often there are babies who are always a delight to watch play. Even the grownups seem very playful with one another, chasing and jumping about. It’s easy to spend a long time here; the meerkats are very entertaining. 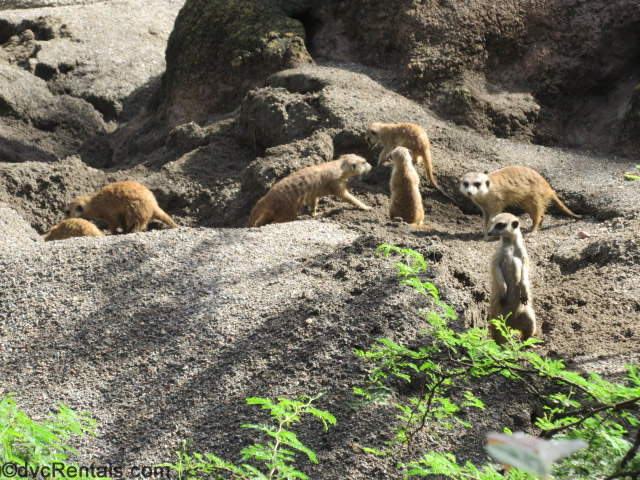 Finally, we reach the spot most guests seem to find the most enthralling—the Gorillas.  These are lowland gorillas, and, similar to the meerkats, it is really enjoyable to watch them interact.  Depending on when you arrive, you may see just two or three gorillas, or you may see more.  When I visited, I saw a female who had recently given birth. She was holding her baby dearly, and although she was right up front in the exhibit, it was not easy for me to get a good picture of her baby, she kept it hidden for the most part. Others have been luckier and got great shots of the new baby.  The mom is named Kashata, and she was bred with Gino, a male chosen through the Species Survival Plan. This is a program that many zoos and aquariums take part in, the purpose being to avoid inbreeding and increase genetic diversity. This helps keep endangered species healthier.  The new baby is a female, and her name is Grace.  There were two other gorillas out at the same time; both were smart enough to keep a respectable distance from the protective new mom and her baby. The Cast Members rotate which gorillas are out at any one time, so there is no guarantee which gorillas you will see, but unless something very unusual is going on you will see gorillas. 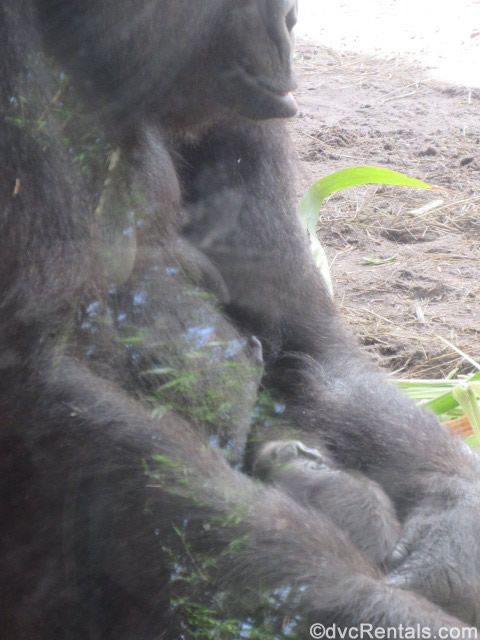 The final exhibit is of Angolan Black and White Colobus Monkeys. Again, lots of fun to watch as they play and chase each other around. There is a sign outside the enclosure that will give you informative information about the monkeys, such as while all the monkeys groom one another the dominant male gets groomed the most by the others in the group.

And now it’s off to Asia and the Maharajah Jungle Trek. 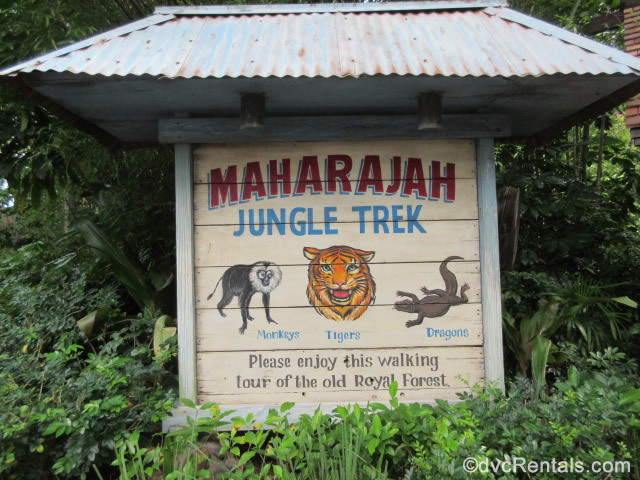 Located just past the entrance to the Kali River Rapids, this trail’s highlights are its tigers.  It is shorter than the Gorilla Falls Expedition, about 1/3 of a mile in total. The first animal you will encounter is a huge monitor lizard, off the trail on the left side. 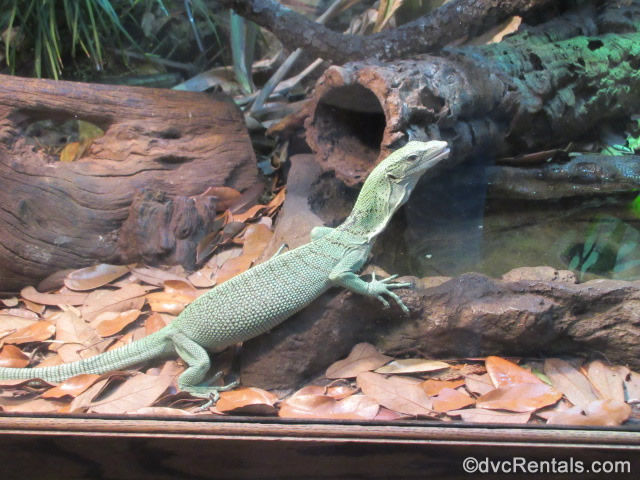 There are guides to borrow that help you identify the animals in the area; these also tell you a bit about each of those animals and how they live their lives. The guides are to be returned before you go on to the next area, a building which houses bats.  There is a sign making it clear that if you want to see bats enter the doors on the left if you are not interested then go straight ahead and exit the building on the other side. 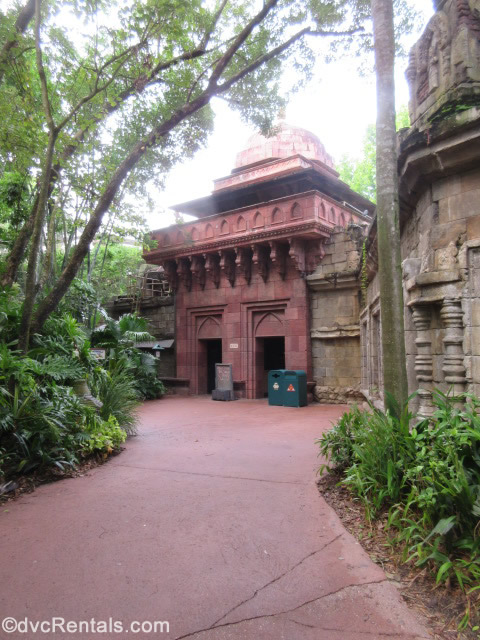 While I find bats very intriguing, some people are not fans of them, hence the warning.  If you do enter, you will see some very large bats (behind glass), usually hanging upside down from their perches. There is a board telling guests about the bats and how they are important to the ecosystem of forests.  Inside the same room with the bats are a few small reptiles to observe in their habitats.

When you exit the bat area, if you are lucky, you will see your first tigers. 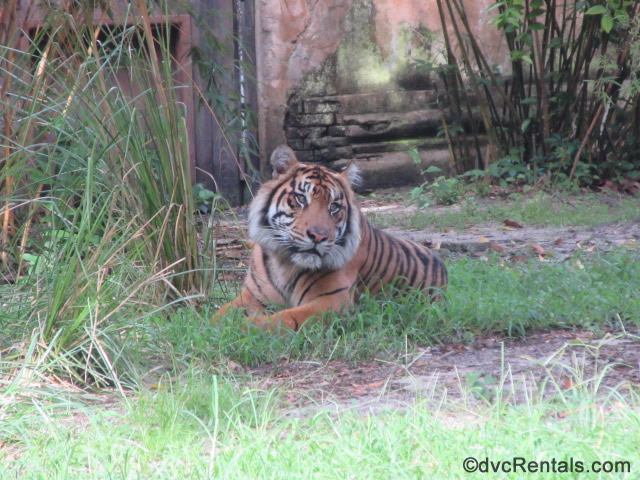 While the entire trail is themed to look like former hunting grounds for a rich Maharajah, the tiger area clearly is the most well-themed spot. You will see “crumbling” walls and buildings, many with colorful murals dedicated to the Maharajahs that changed the hunting ground into the wildlife preserve we see today.  Bits of cloth that resemble pennants are hanging in the area, these represent the variety of religious cultures in Asia. 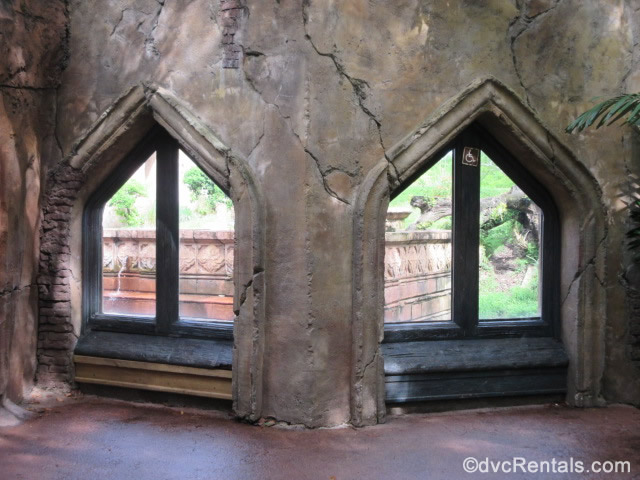 The tiger area is behind glass and is quite large. As they are wild animals there is no guarantee where or even if you will see tigers. More often than not they are visible, but not always.  In December of 2017, two tiger cubs were born here, a male and a female.  My friend and I were lucky enough to be walking the trail the very first day the babies were on display with their mom.  Now they are fully grown, and as they are old enough to breed they had to separate the siblings. I noticed one alone and he appeared to be making a cry of some sort so I asked one of the Cast Members about it.  Sadly, she said he was unhappy to be taken away from his sister and mom, and could probably still smell them.  However, although I felt bad, I did understand that inbreeding is very bad for the species and they did what they had to do.  My hope is the male will be sent elsewhere so he can breed and not be alone any longer, or they will bring a female to the Animal Kingdom who he can safely mate with. 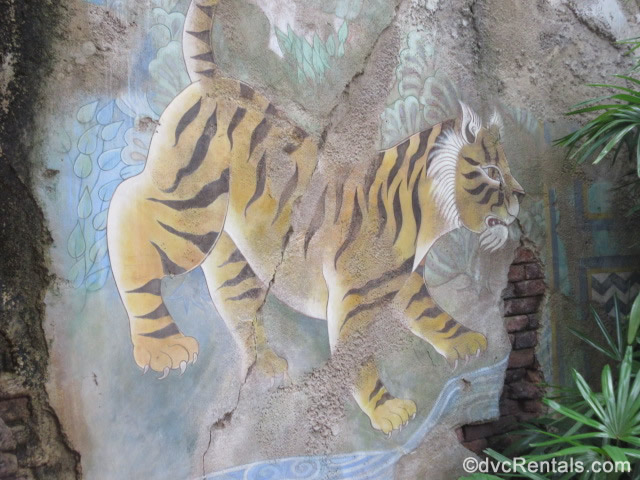 In the same area, separated from the tigers of course, are a few species of deer. Once you have passed the tigers, walking further on the trail you will see gibbons (a type of monkey), and there is a really nice aviary with a huge variety of birds. Although this trail is the smaller of the two I have been discussing, the bird area is bigger at this one. If you are a birder you can sit on a bench for hours and observe the many species of birds eating, flying and interacting. There is a bird guide here so you can find out exactly what you are seeing, but if you can’t seem to figure it out there are friendly Cast Members ready to assist.  There are interesting stone statues here as well, in my opinion the entire area is beautifully themed.  When you exit the bird area you have completed the trail. 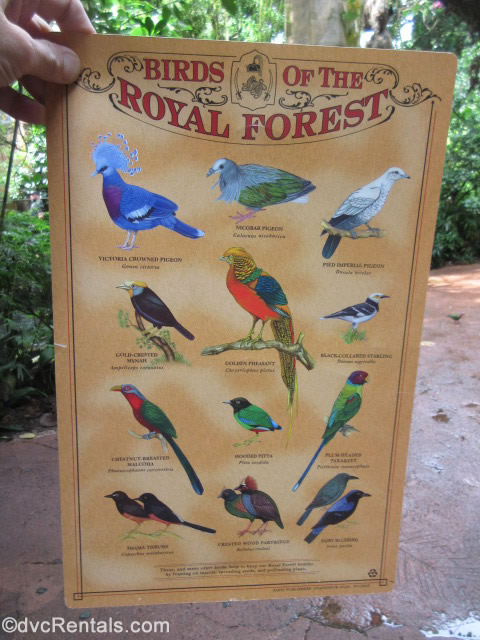 Both trails are wheelchair accessible. They are great to decompress from the noise and excitement of the theme park, as both are off the beaten path and generally very quiet. 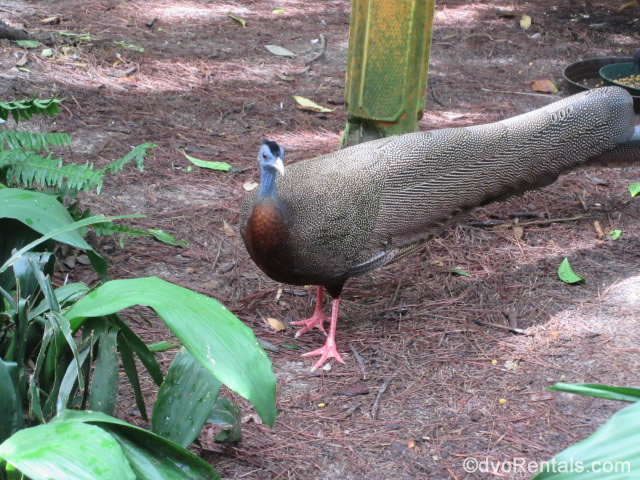 On busy park days these trails are excellent to get away from the crowds, and since there is Fast Pass option you walk right in with no wait. I mentioned this elsewhere in the blog, but I want to remind you that there are Cast Members in multiple places on both trails. Do not hesitate to ask them any question you may have, that’s why they are there! Talking to Cast Members will often lead you to learn things you may not have thought of, such as interesting information about animals, the back story to the attraction, or where to locate Hidden Mickeys! I find both trails very relaxing and interesting; I hope those reading this will take the time to explore one or both.