Gone are the days of a boring side salad or sad black bean burger! Plant-based options can be found at many dining locations on Walt Disney World property, with more and more options appearing frequently.

My name is Zoe, and I have been working with David’s Vacation Club Rentals since April 2020! My favorite activity to do at Disney is EAT, and in recent years Disney has expanded their selection of plant-based options exponentially for Quick Service and Table Service meals both in their theme parks and at their resorts, including the Disney Vacation Club Resorts.

Disney defines plant-based options as food items that do not use animal meat, dairy, eggs, or honey. Many dining locations at Walt Disney World use a green leaf icon on their signage and menus so guests can easily identify plant-based options, but I do recommend speaking with a Cast Member if you’re ever unsure about something you’d like to order.

My teammate Kristen and I finally got to “Return to the Magic” early in 2022 on separate research trips with our fellow team members; I stayed at Disney’s Old Key West, and she stayed at Disney’s Saratoga Springs Resort & Spa. While touring the DVC Resorts and Walt Disney World theme parks, we enjoyed a wide variety of plant-based options that we’d love to share with you!

Zoe: I always love when I can get a filling meal from a Quick Service location that isn’t a simple veggie burger, and The Marrakesh Falafel Platter from the Mara at Disney’s Animal Kingdom Villas is a great option! This dish comes with tabbouleh, cucumber-tomato salad, and a side of hummus and tahini sauce served with pita bread. The Mara also offers a plant-based dessert option, the Flamingo Cake, which is a unique spiced chocolate cake with coconut ganache. 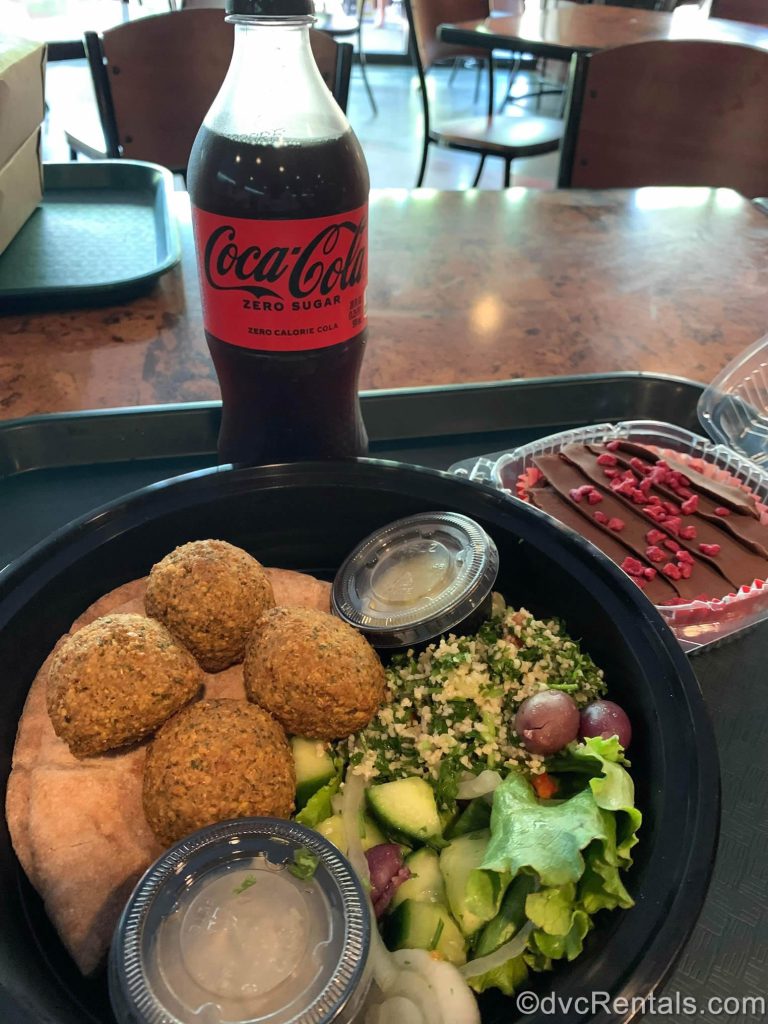 Kristen: With its views of the Sunset Savanna and varied plant-based options, Sanaa has become a “must-stop” for me whenever I visit Kidani Village. As someone who is, unfortunately, a complete wimp when it comes to spicy food, I was a bit hesitant to order anything that used Indian flavors. That said, upon voicing this worry on my first visit, our amazing server Josh went through the menu with me and sold me on the Potjie Inspired with two of the Harvest options, which were served with basmati rice. This dish was absolutely delicious! I believe the Harvest options might have changed since this particular visit, so I would advise speaking with your server; they are more than happy to advise! 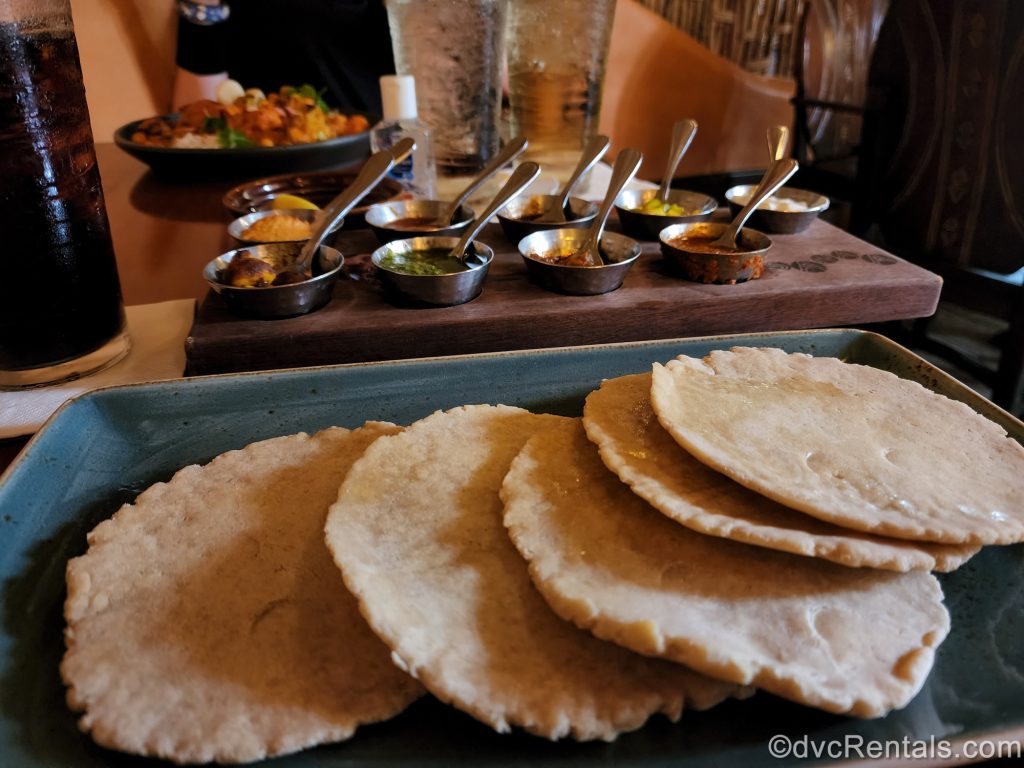 After sharing the Indian-Style Bread Service appetizer with my teammates back in March, I decided to order it as my main on my most recent visit in July. While I still enjoyed the many accompaniments (all but one of which is plant-based as is), Sanaa only has one kind of vegan naan bread, and it became rather boring, even with the various dips and sauces. Unless you really enjoy their allergy-friendly naan, I would definitely recommend sticking to the bread service as a shared appetizer. Sanaa also offers Kheer as a plant-based dessert, which is a coconut-rice pudding topped with cashew streusel and saffron-poached fruit. 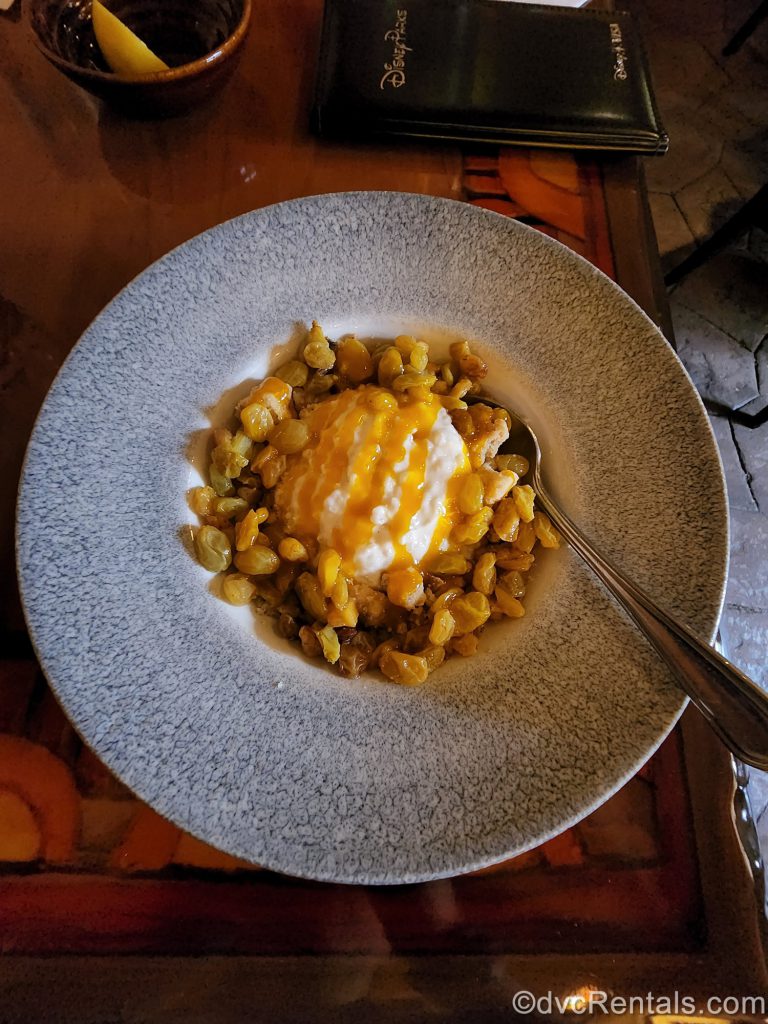 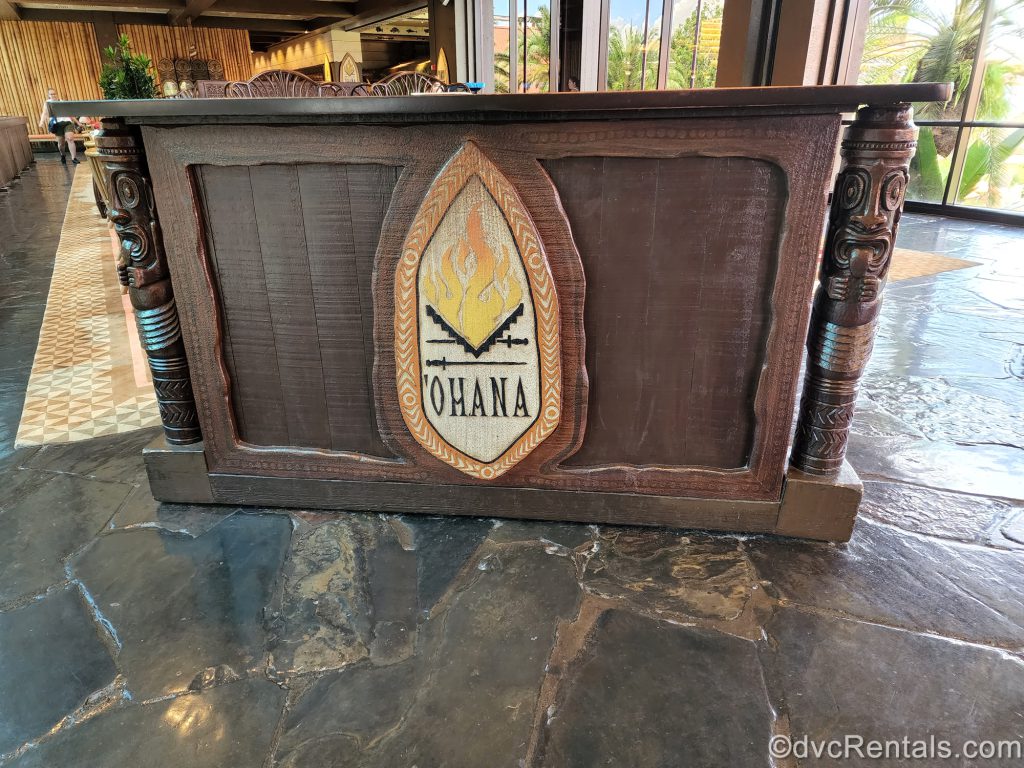 Zoe: Sometimes, after a few days of walking around the parks, a filling breakfast is needed! Disney’s Polynesian Villas & Bungalows is one of the few resorts to offer an All You Care to Enjoy plant-based breakfast option at ‘Ohana. The skillet can be customized to a variety of dietary options, as we also had a person in our group with Celiac disease who was able to order a fully gluten-free skillet. The plant-based skillet features plant-based Mickey Waffles, scrambled “eggs,” plant-based sausage, and breakfast potatoes. POG juice (a delicious blend of passion fruit, orange, and guava juice) is included with the meal, as well as fresh fruit and a plant-based cinnamon sugar donut. The pineapple coconut bread, which is served with the traditional skillets, is sadly not plant-based; however, I found this meal to be very filling, and it was nice to have as a heartier breakfast option. 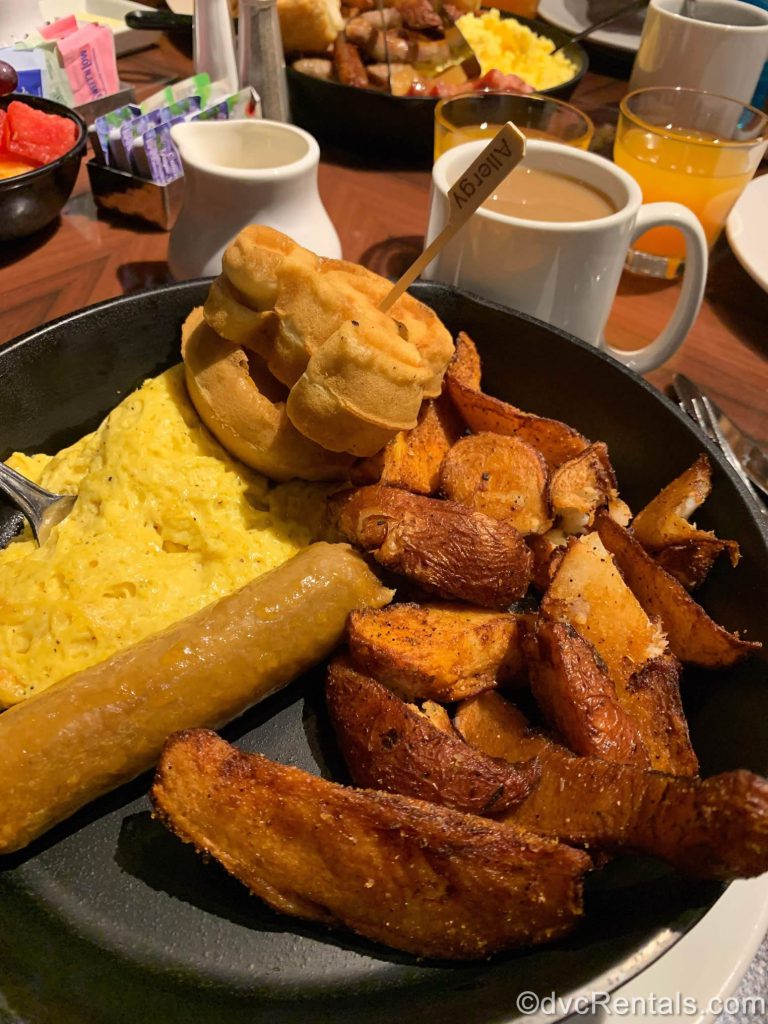 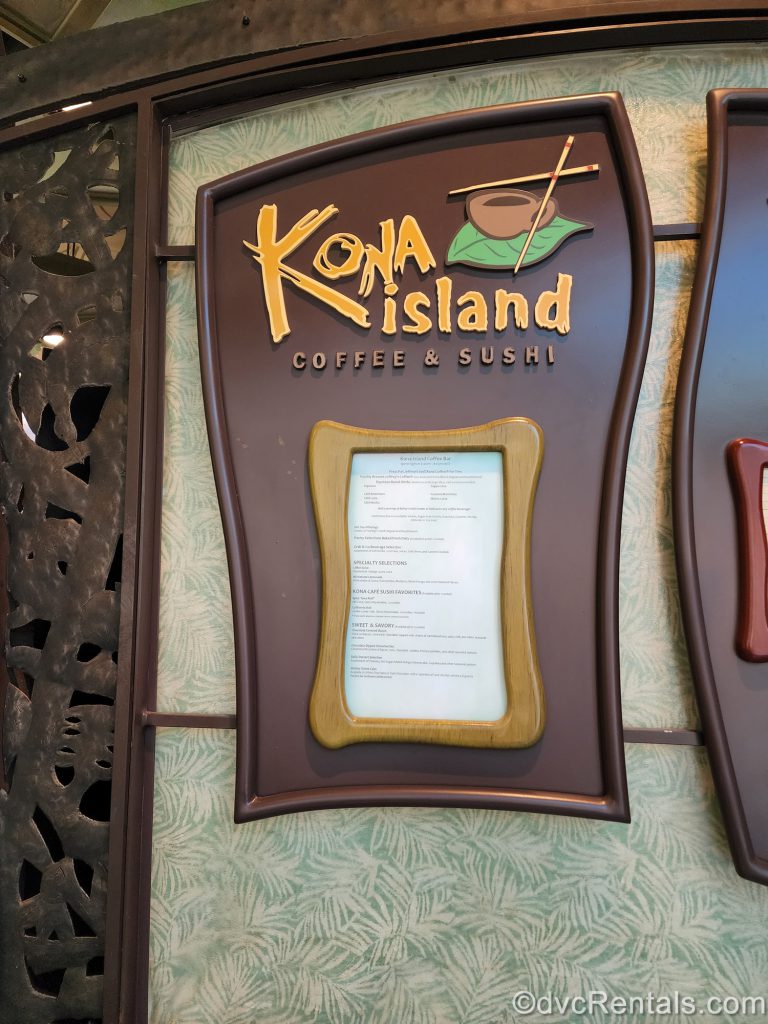 Kristen: While a meal at ‘Ohana is still on my bucket list, I have had the pleasure of visiting some of the Quick Service locations at the Polynesian. Kona Island has an absolutely delicious Coconut Pearl Tapioca dessert that is both vegan and gluten-free! It was light and refreshing, especially on such a sweltering day, and the tropical fruit was beyond fresh. The boba on top and pineapple compote at the base of the cup are just the perfect finishing touches. 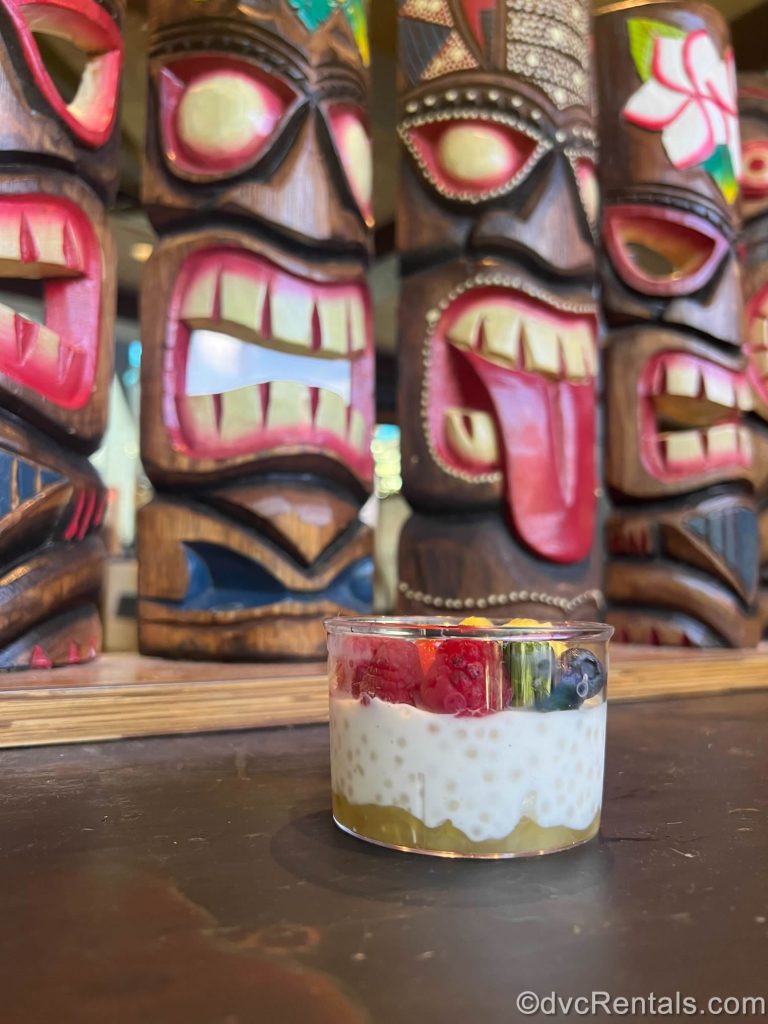 Plant-based and gluten-free eaters can also pick up a Cinnamon Sugar Donut at Kona Island. Zoe has confirmed that this donut is very similar to the one she was served at ‘Ohana, if not the same one. The donut I purchased is actually from Erin McKenna’s Bakery NYC in Disney Springs. It was a very nice surprise to find an item from this all vegan and gluten-free location at the Polynesian as I was pressed for time on my recent visit and was not able to visit Disney Springs as a whole. 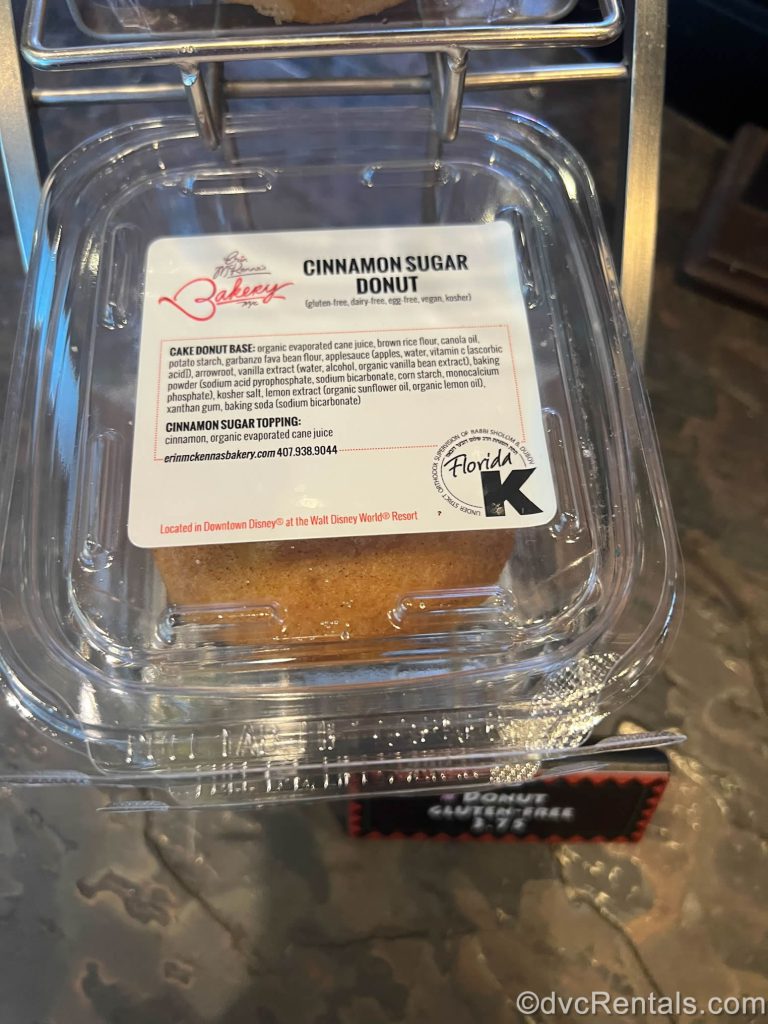 Zoe: If you are looking for something different for your morning caffeine fix or afternoon pick-me-up, Le Petit Café at Disney’s Riviera Resort offers non-dairy milk for their specialty coffees. The café has seasonal specials, and I always recommend speaking with a Cast Member to find out which options can be made dairy-free. I enjoyed a seasonal Iced Raspberry Mocha with soy milk on my last visit. 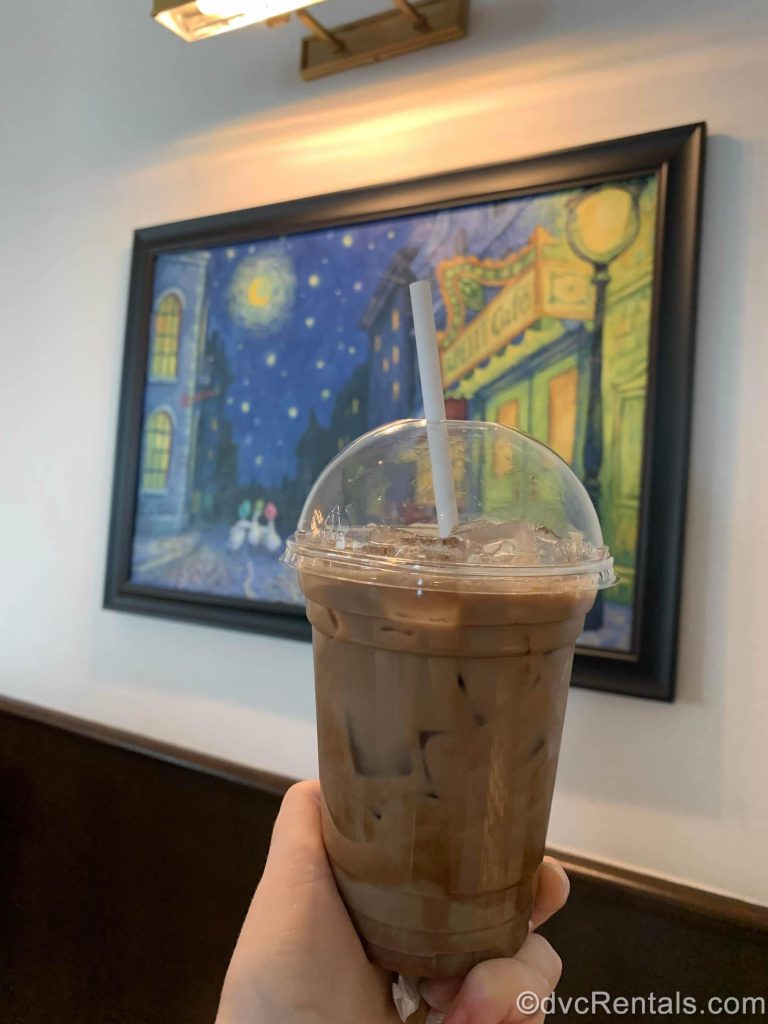 Kristen: This is such a great tip, Zoe! I had the Lavender Iced Tea Lemonade on my visit because I just assumed the café did not have non-dairy options. While my drink was also delicious, it’s always a good idea to speak with Cast Members, so you have all the facts. 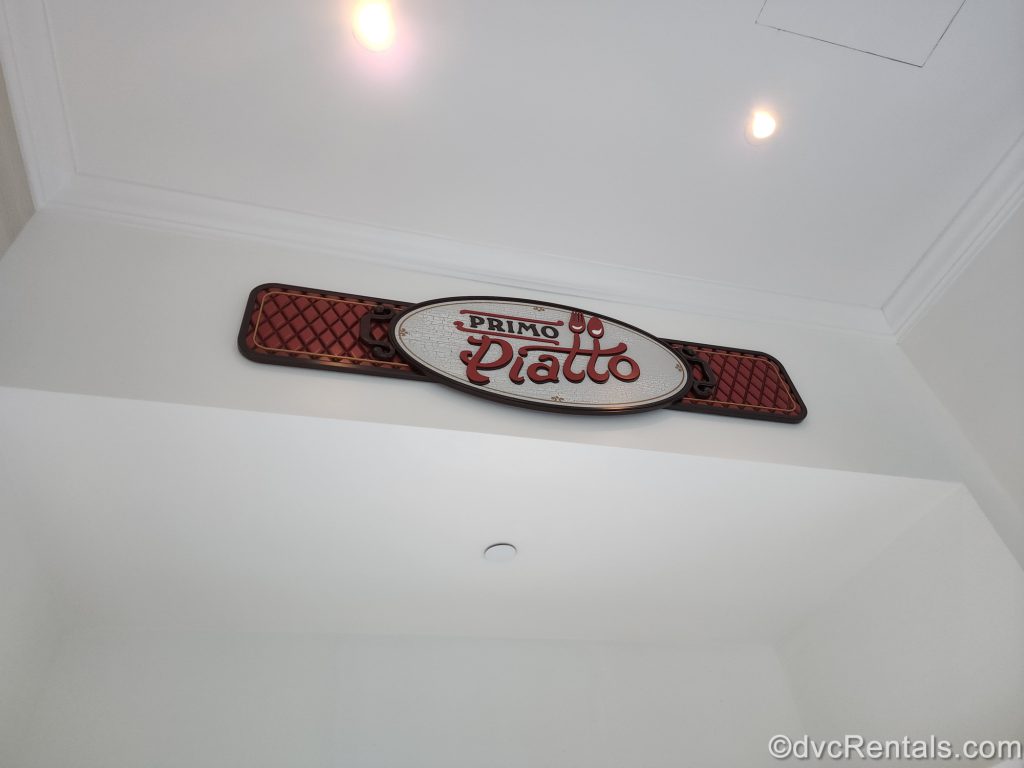 Kristen: With its harissa-marinated vegetables and cucumber-coconut yogurt, the Grilled Vegetable Skewer at Primo Piatto is so good that the only reason I knew it was from a Quick Service location was because it was served to me in a brown box. Now, Disney has plenty of amazing Quick Service restaurants in general, but this is the first time I’ve had a truly amazing plant-based dish from one of them. In terms of taste, this dish is super unique and has just the right amount of bite to it. As mentioned, I’m not a fan of spicy food, so “just the right amount” might seem fairly tame to others, but even so, I would highly recommend this menu item. The only thing I will say is that it was a bit tricky to eat. After pulling the vegetables from the skewer and attempting to fold the pita in my hand, I quickly decided that a fork and knife were the way to go. 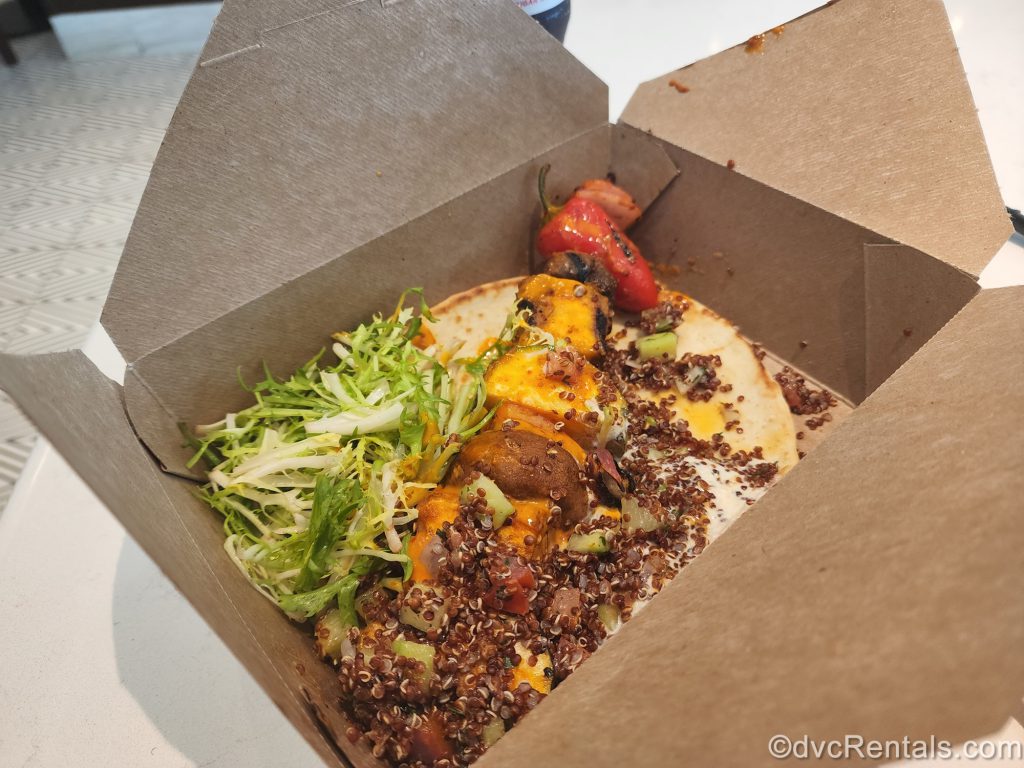 Kristen: I usually try to avoid eating veggie burgers as much as possible on my Disney trips. This isn’t because they’re bad necessarily (though many of them are quite “sad,” to use Zoe’s word from earlier) but rather because they become tiresome after a while as they are often the only plant-based option available at many dining locations. That being said, if you are going to have one veggie burger on your trip, I highly suggest making it the Impossible Burger at the Grand Floridian Cafe. While Disney uses the Impossible brand burgers at many of their dining locations, this entree takes it to the next level with delicious caramelized onions and plant-based smoked Gouda. The burger is placed on a soft kaiser roll, which brings everything together. Also, anything that comes with a giant pickle spear is amazing in my books. The Grand Floridian Cafe also had vegan rolls and vegan butter available. 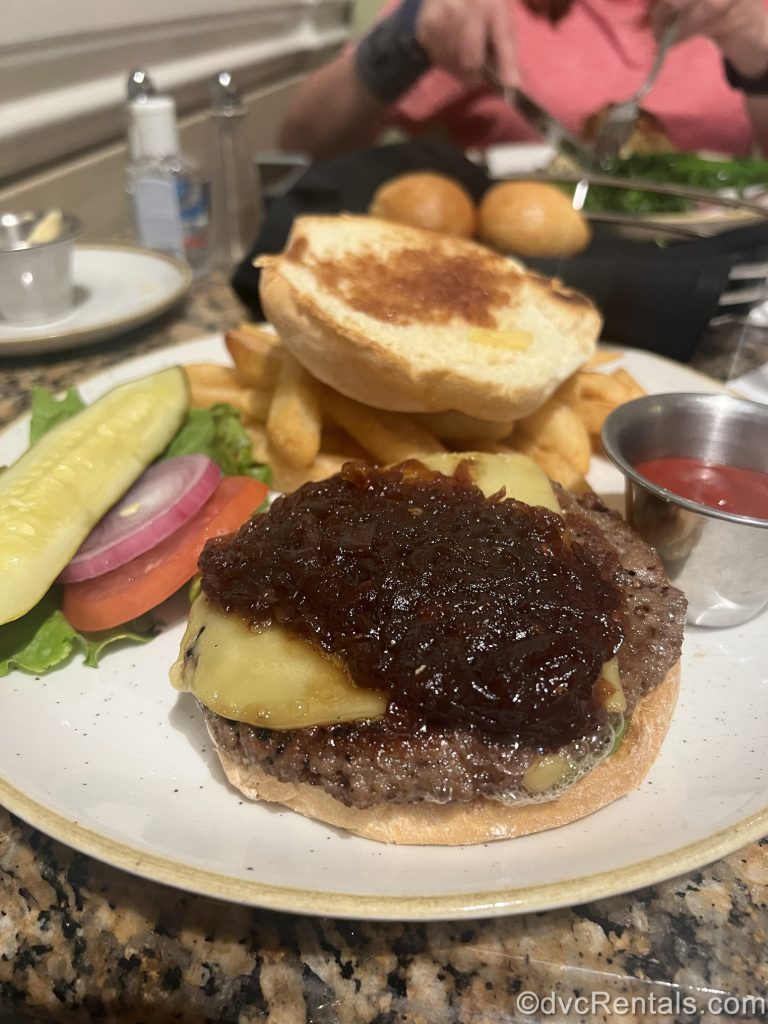 Zoe: Dining at Whispering Canyon Cafe at Disney’s Wilderness Lodge is a must for my family on every trip! Not only do we love the fun service that is offered (remember to ask for ketchup), but the plant-based skillet is one of my favorite meals on property. My personal favorite part of this meal is the vegan cornbread and the maple-chipotle barbecued jackfruit! 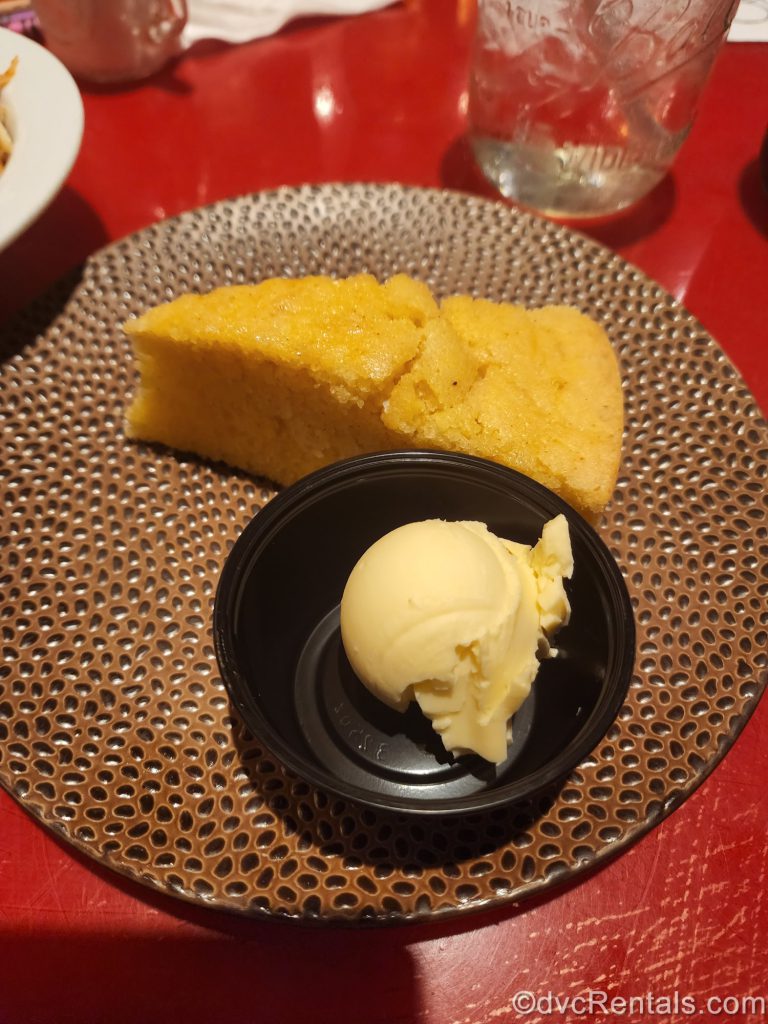 Kristen: I absolutely agree with Zoe; the cornbread was fantastic, and I most definitely asked our server for a second helping. The signature skillets are All You Care to Enjoy, so ordering an extra slice of cornbread is covered in the cost. I also enjoyed the sheer variety of plant-based meats: spicy “sausage,” mustard glazed beefless tips, herb-brushed Trick’n Chick’n, and of course, the jackfruit Zoe mentioned. The accompanying vegetables were wonderfully seasoned. I wasn’t a huge fan of the coleslaw that was served at the beginning of the meal; our server Joey informed me that it was made with a vinaigrette rather than a plant-based mayonnaise which made sense as it did lack the creamy consistency of other coleslaw I’ve sampled. Whispering Canyon is most definitely a hearty meal, and I would advise going into it hungry! 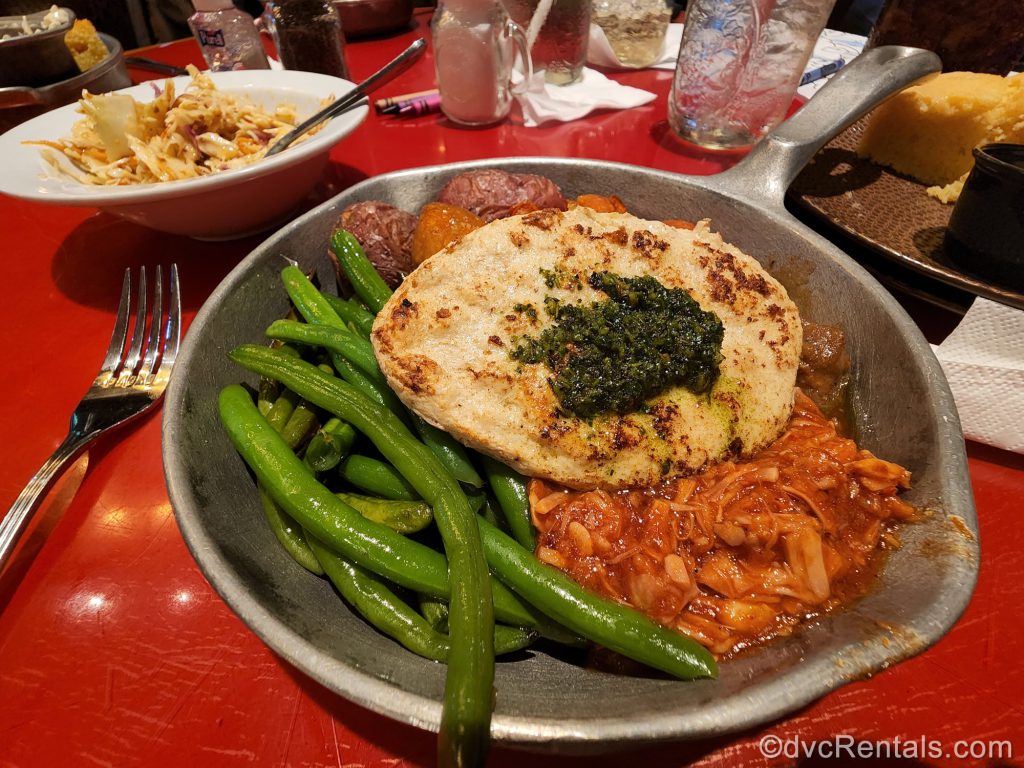 Some of Our Favorite Plant-Based Treats Around Walt Disney World

Zoe: While Disney is constantly updating their menus, one option that has thankfully stuck around is the plant-based Totchos from Woody’s Lunchbox. Kristen and I both agree that they are a “must” on every trip to Disney’s Hollywood Studios. As mentioned, Disney has been great about labeling all plant-based options on menus with a small green leaf. However, this option is not technically featured on the posted menu. To order the plant-based version, you can use Mobile Order on the My Disney Experience app or speak with a Cast Member. 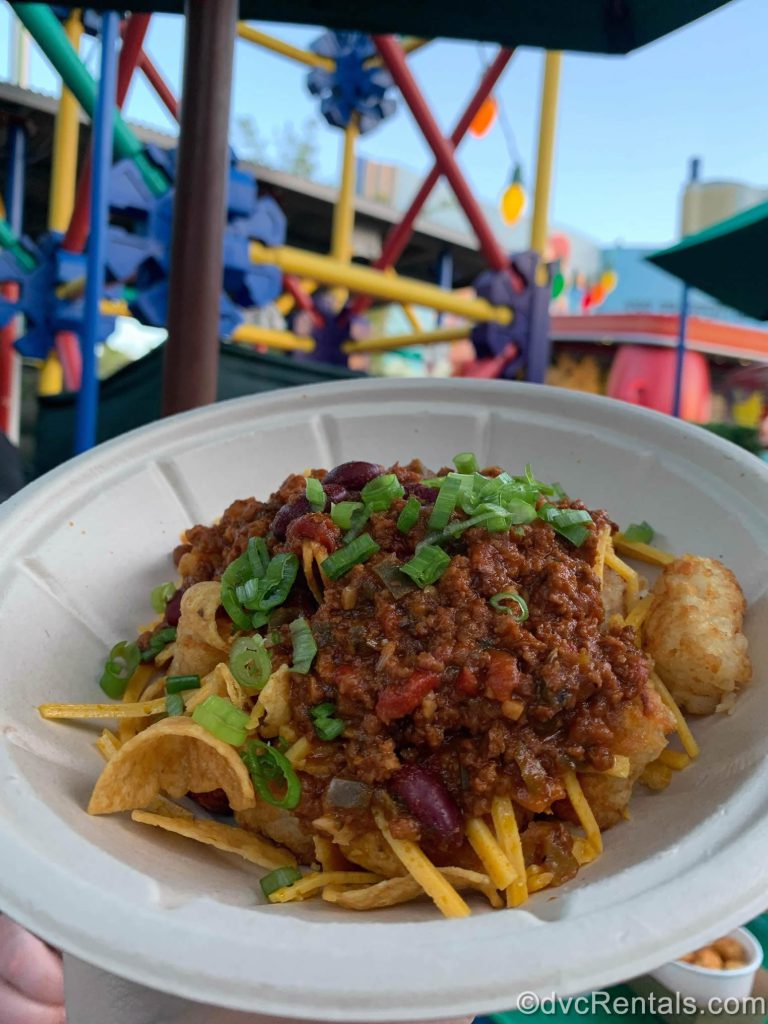 Zoe: While pineapple Dole Whip is arguably the most popular flavor, I much prefer the key lime Dole Whip, which can be found in Magic Kingdom at both Story Book Treats and Aloha Isle Refreshments. This tart treat is 100% dairy-free and the perfect snack on a hot day! Nearly all fruit-based Dole Whip flavors are dairy-free. As always, I recommend speaking with a Cast Member about ingredients if you are ever unsure. 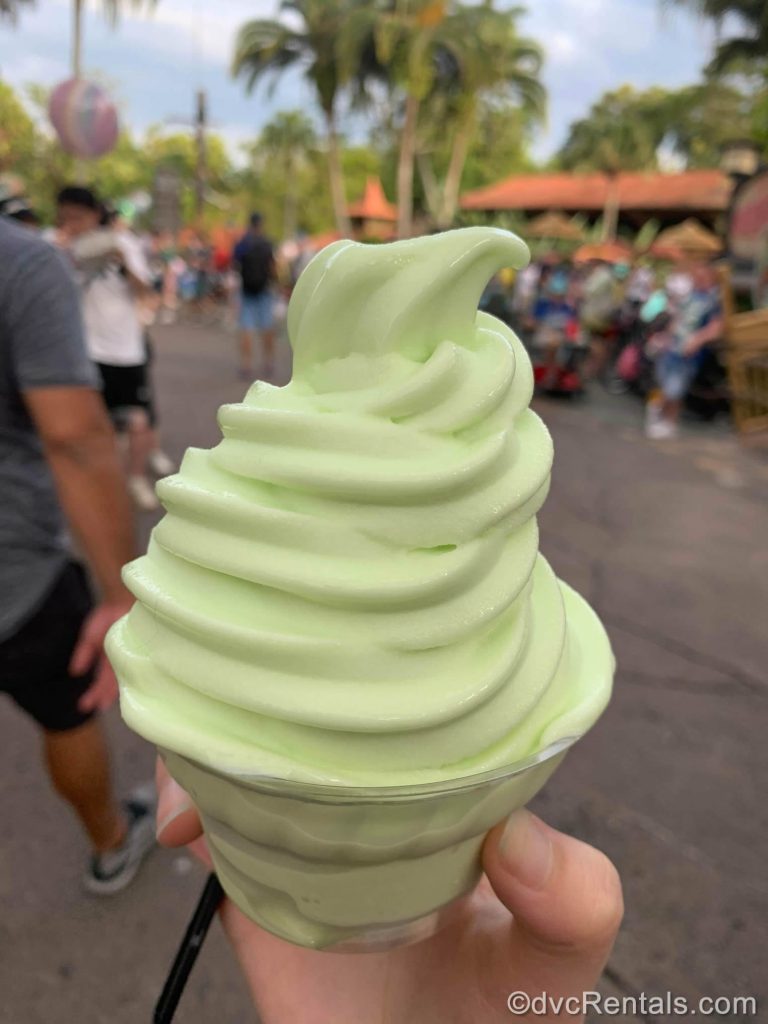 Kristen: Key lime is good, but the original pineapple is just so classic! I also love that if you’re looking to shake things up a little bit, you can get a Dole Whip float rather than just in a cup. I had my very first Dole Whip float at Pineapple Lanai at the Polynesian, and it was delicious!

Zoe: Many guests are surprised to learn that the iconic Mickey Pretzels are plant-based when you omit the side of cheese sauce – which also saves you a bit of money! These can be found at various locations around every Walt Disney World theme park. 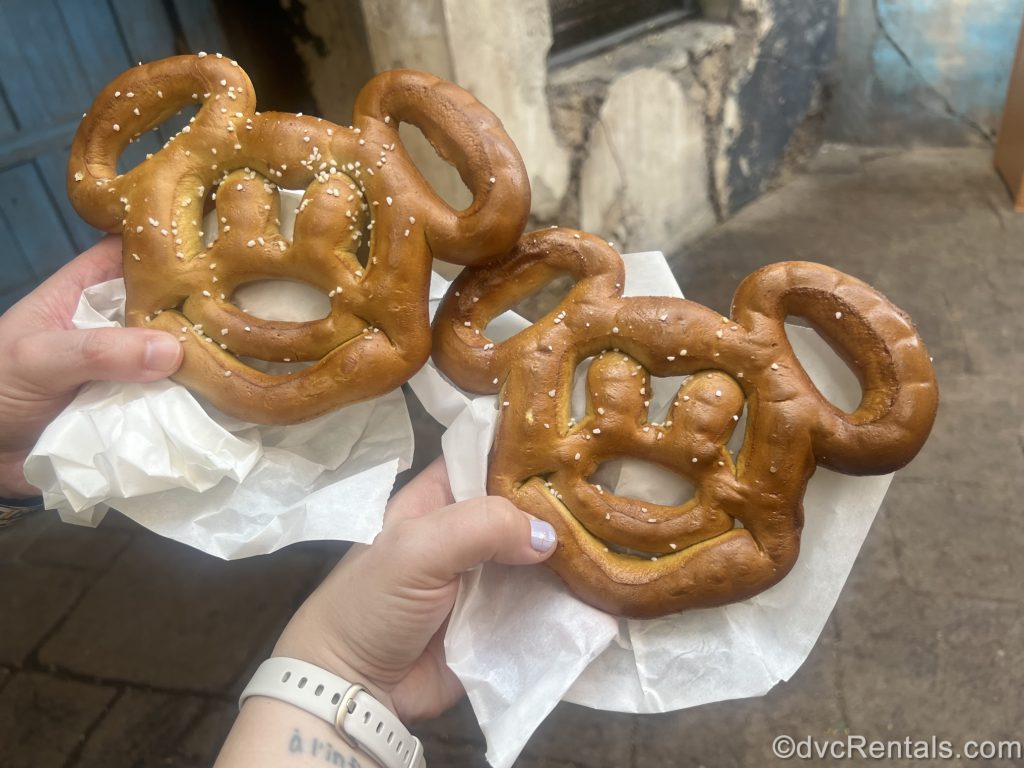 Kristen: Mickey-shaped food just tastes better; it’s a fact! I had a Mickey Pretzel as a mid-morning snack on my latest trip, picking it up at the Harambe Fruit Market in Animal Kingdom park, but I’ve found them at the Lunching Pad in Magic Kingdom as well.

This is only a small taste of the plant-based options available at Walt Disney World, and we are excited to see what new options will appear next!

What are you most excited to try on your next trip?