The Tree of Life

Walt Disney had a word for attractions at Disneyland that would draw guests closer into the park. He called these attractions “Weenies.” Similar to dangling a carrot in front of a horse to make it try to get to it, a weenie makes guests want to move ahead with enthusiasm.  At Disneyland, the main weenie was the Sleeping Beauty Castle.

Although he never lived to see it, Walt was involved in the planning of the main weenie at Walt Disney World, the Cinderella Castle (remember, when the Florida park first opened there was ONLY the Magic Kingdom, the first addition would not be until 1982 when Epcot opened). 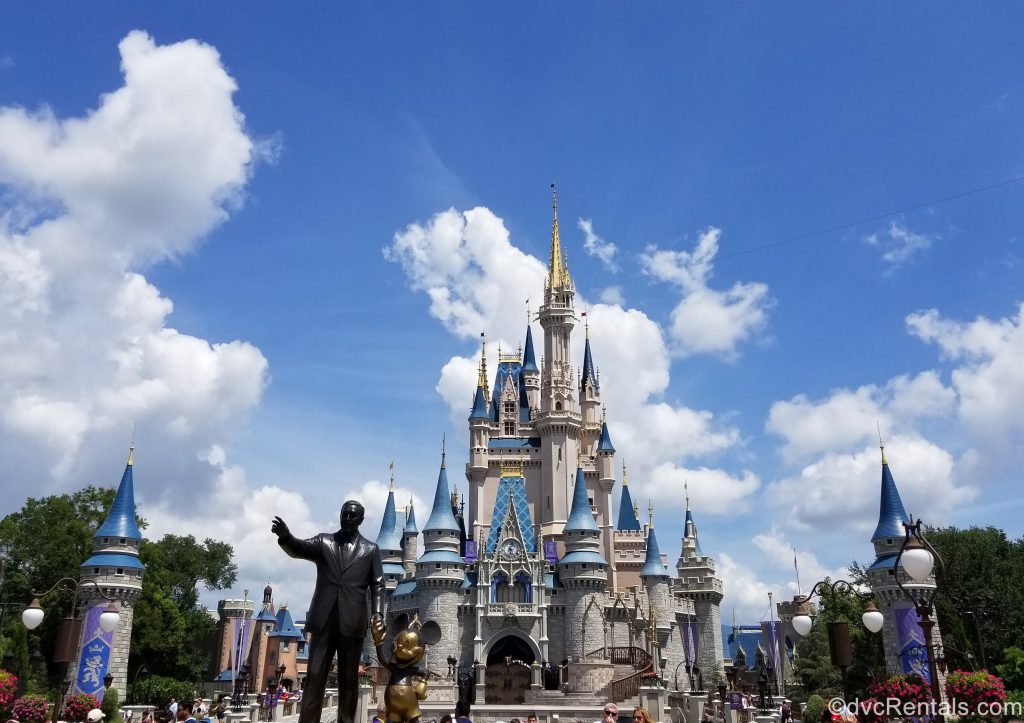 After Walt’s death, the term remained in use among Imagineers. Spaceship Earth is the main weenie at Epcot. When Disney MGM studios (later renamed Disney Hollywood Studios) opened, the Chinese Theater was its weenie. That changed some years later when the Sorcerer’s Hat was added to the park.  The hat was removed a few years ago, and now the theater is visible again, although a stage frequently blocks it for special events.

On April 22, 1998, Earth Day, a new park opened at Walt Disney World.  Known as Disney’s Animal Kingdom, this park was dedicated to the conservation of, and knowledge about, the creatures that roam our planet. 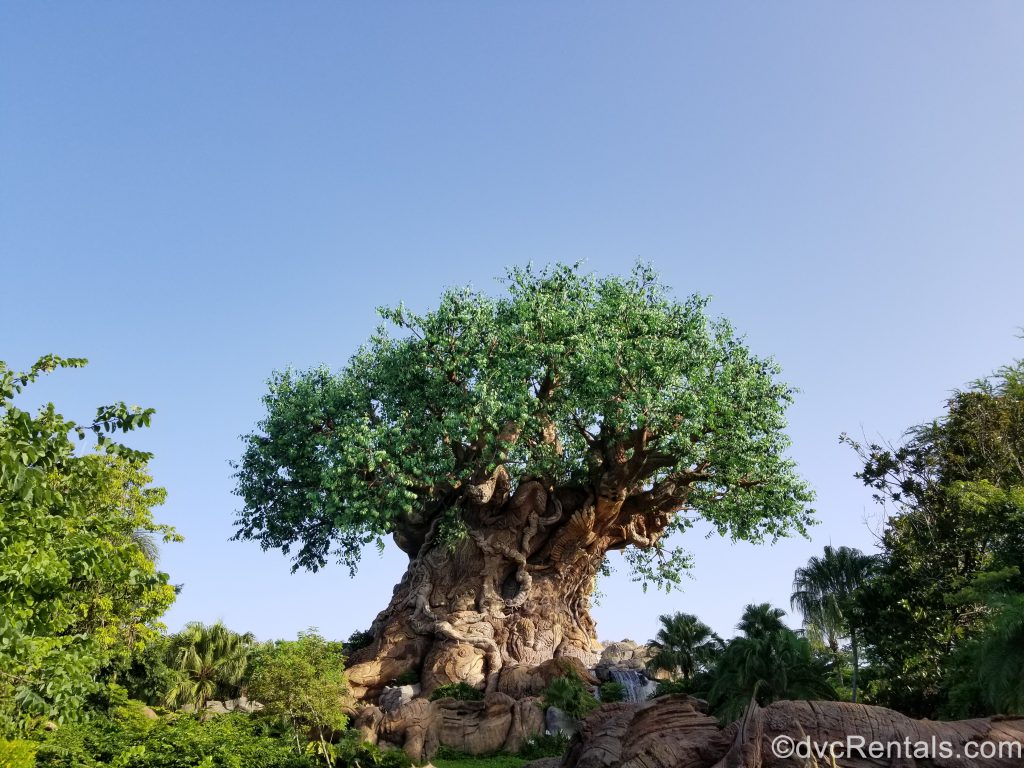 In keeping with Walt’s tradition, a weenie was needed for this park. The Imagineers came up with the idea of creating The Tree of Life. It took a lot of creativity and engineering to build this structure that is much more complex than most guests realize. To quote Joe Rohde, executive director of the Animal Kingdom and Vice President of Walt Disney Imagineering: “The tree of life is a technological marvel, but it’s also a symbol of the beauty and diversity and the grandeur of our animal life on Earth.” 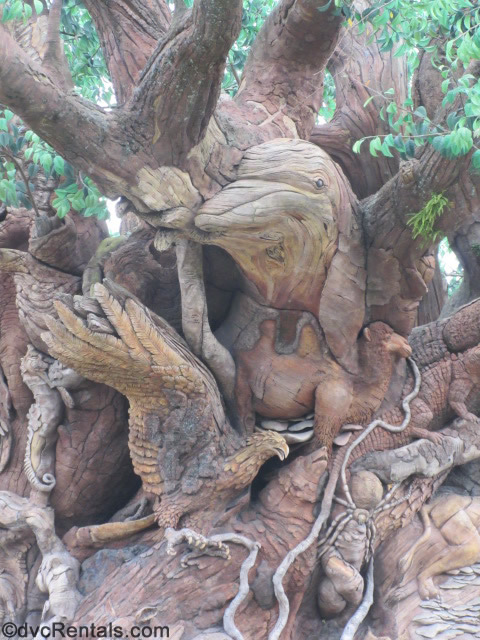 The Tree of Life is not a real tree; it is manmade and is built to look like the African baobab tree.  These trees absorb and store water in their large trunks during the rainy season. This stored water allows the tree to produce nutritious fruits during the dry season when animals have a hard time finding food. This is why a Baobab tree can be known as a Tree of Life. 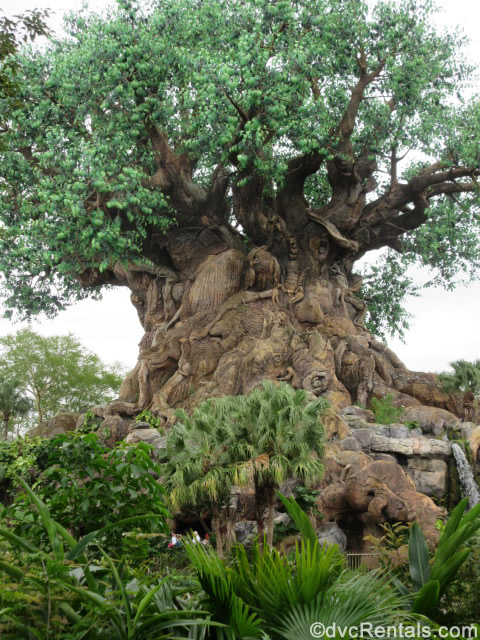 Among the challenges that Imagineers had to overcome were making sure the tree could withstand hurricane force winds, and finding a way to safely erect a theater inside the “tree.”  The huge base of the tree helped solved the hurricane problem; the tree is so bottom heavy it is well anchored and isn’t going anywhere. But what about the theater? An Imagineer happened to be watching a special on oil derricks when he suddenly realized that was the solution!  Take an oil derrick, build the tree around that VERY strong structure and voila! A theater inside the tree was now possible.

Once the engineering issues were dealt with, now it was time to carve and design the animals onto the sculpture of the tree. A number of Imagineers handled this task, and in the end, over 320 animals adorn the Tree of Life. Some are very obvious, others are more discreet, and it’s always fun to discover an animal on the tree you hadn’t seen on past visits to the Animal Kingdom. 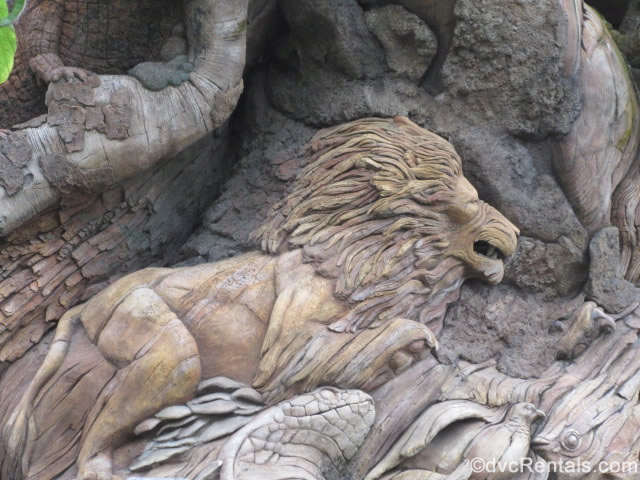 It took enormous creativity and work to carve the animals into the tree. A mortar-like material would be slathered onto the tree, and the artists had to complete their carving within 7 hours, as the mortar would dry and be inflexible after that.  All in all, it took one and a half years to complete the Tree of Life. 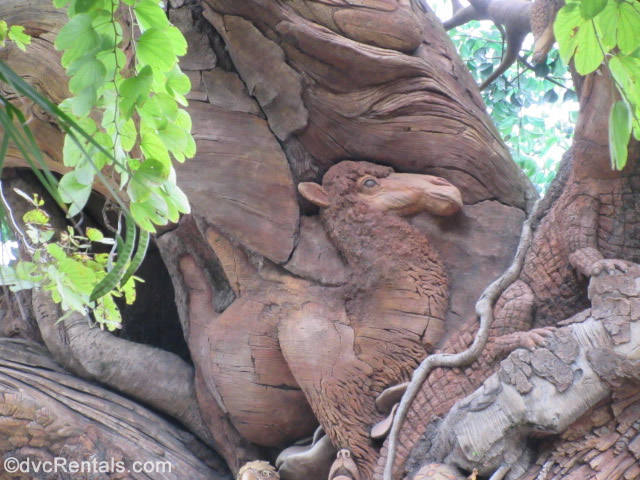 Although it may not be obvious to the naked eye, the tree trunk consists of over 50 tones of various colors, as well as different colors of lichen and moss among the branches. 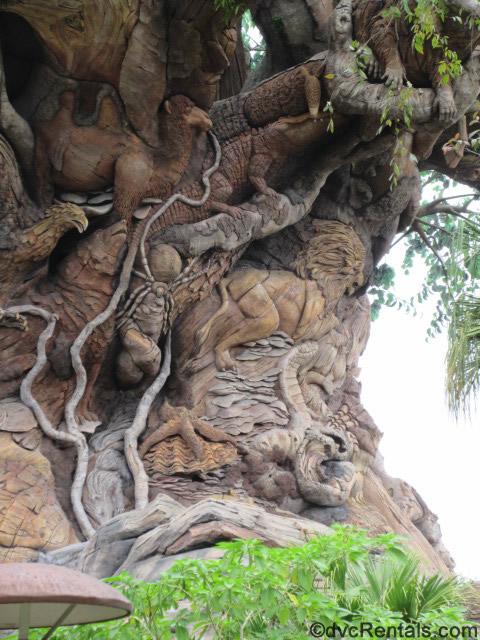 Statistics? The tree is 145’ tall. There are 45 main branches on the Tree of Life that lead to over 750 smaller branches which then lead to almost 8000 end branches.  And there are over 102,000 leaves on the tree! In 2016 these leaves were “plussed” to add a nighttime show to the Tree of Life, called the Tree of Life Awakenings. After dark, the tree will light up in gorgeous color about every ten minutes, and beautiful images of animals are projected onto the tree as the leaves light up in all the colors of the rainbow.  There are four different shows that are displayed on the tree each evening.

TIP: There is a little known path that gets you closer to the tree and makes for some great photo ops. As you exit the Harambe area in Africa, look to your right just as you have passed the Tree of Life, but before the bridge that leads to Discovery Island. There is a lot of plant growth in the area, so many guests don’t see the path and pass right by it.

Inside the Tree of Life is a fun 3D show called It’s Tough to Be a Bug.  Although it’s a great presentation, there is rarely a long line to get in and unless it’s a very busy time of year a Fast Pass is generally not needed for the attraction. The queue is great, as you get to check out many of the animals carved into the lower part of the tree as you pass by on your way to enjoying It’s Tough to Be a Bug. 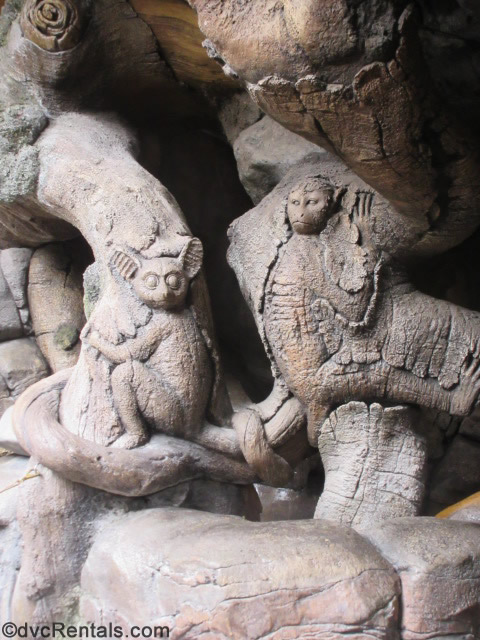 Additionally, you will see a number of “Punny” posters many based on real shows, songs, and movies, but renamed to sound like insect shows. A couple of examples: The “Termite-ator” and “Claire de Room” (a poster of a stink bug). 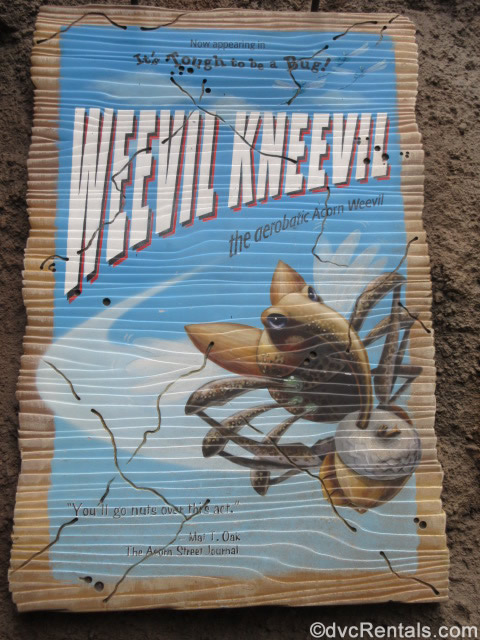 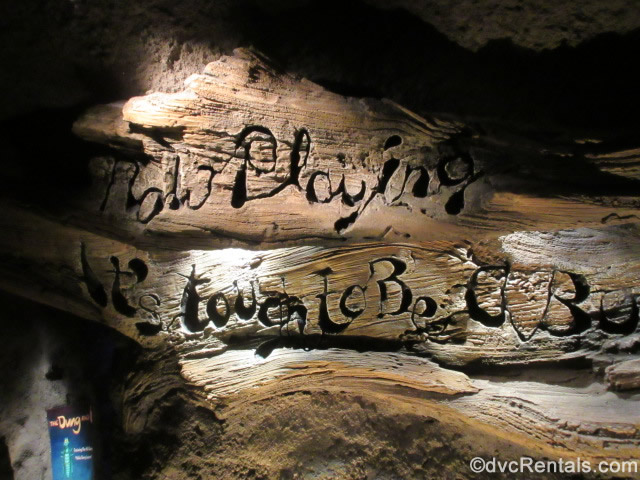 As you enter the loading area for the attraction, you will see more posters as described above (i.e., “Web Side Story”), and you feel like you are underground. Roots abound above you, and it’s dark. Heads up:  Some kids may not like the dark areas, and the 3D movie can be frightening for some children as well.

It’s Tough to be a Bug is hosted by Flik from the Pixar movie A Bug’s Life. Flik is animatronic.  He instructs you to put on your “bug eyes” which are special 3D glasses you are given on your way inside the 430 seat theater. 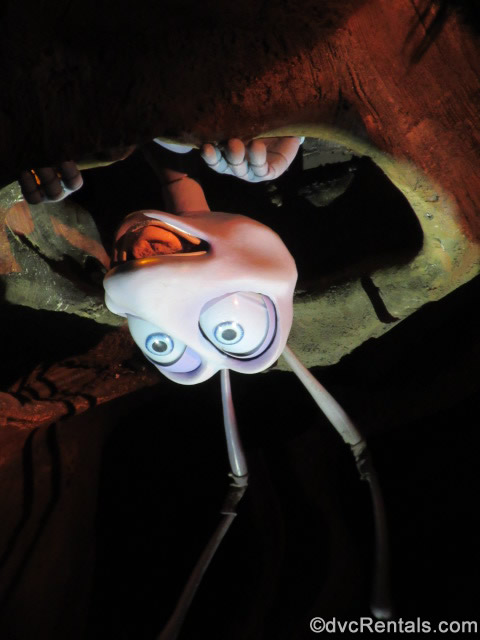 Soon the 3D movie starts, and insects appear on the screen with scenes in which we can see how each helps the planet. I don’t want to give away any spoilers to anyone reading this who has not seen the attraction yet.  Suffice to say it’s very funny and at the same time the film is very educational and we learn, among other things, that there are WAY more insects in the world than there are people As an FYI, like most other 3D movies at Walt Disney World, aromas and sprays of water are part of the show.  A few other things happen that will surprise you if you haven’t had the pleasure of enjoying this attraction, but again, I don’t want to spoil it for anyone. I will say that I love the final song entitled (what else?) “It’s Tough to Be a Bug”. 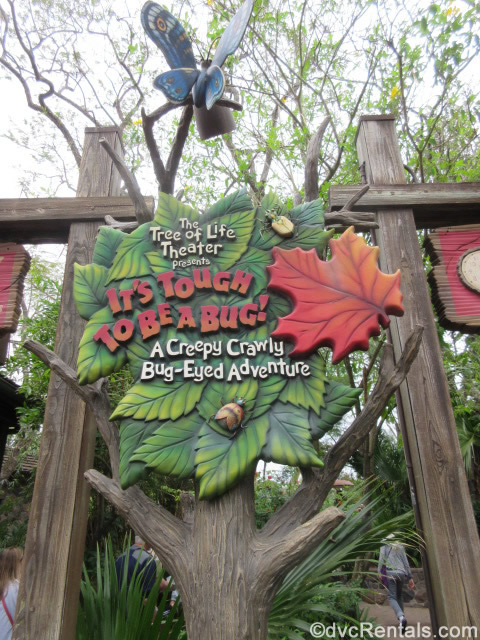 The Tree of Life is an Engineering Marvel, one of Disney’s finest creations IMHO. I hope reading this helps you appreciate how much work and imagination went into creating this amazing weenie! And if you have never seen It’s Tough to Be a Bug I hope you are inspired to give it a try, the show last approximately 10 minutes. 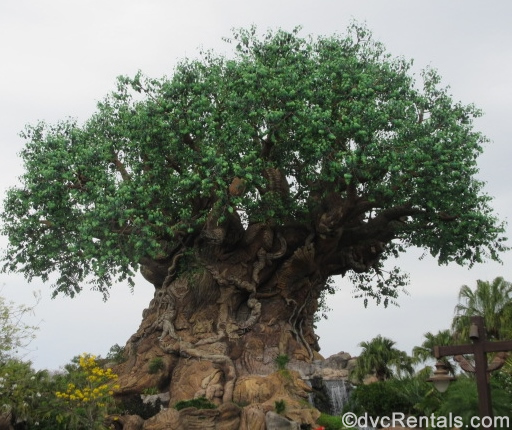