If you have never stayed at (or had dinner at) one of the Disney Resorts that surround the Seven Seas Lagoon or Bay Lake, you may have never seen one of the longest-running and most enjoyable shows at Walt Disney World; called “The Electrical Water Pageant.” This event has been entertaining guests of all ages since October 25, 1971, 24 days after Walt Disney World first opened its gates.

Prior to Disney World’s opening day, management decided to look into adding a nighttime show to its entertainment mix. Imagineer Bob Jani realized that the lagoon resorts would all share the same view in the evening; nothing. While some had a view of the Cinderella Castle, the lagoon itself was dark and empty. By adding floats with lights to travel around the lagoon, Jani realized he could turn this void into a quality show for guests staying at resorts with a lagoon view.

Jani and other Disney Imagineers came up with the concept for what they originally called the Electrical Pageant. The pageant would have thousands of sparkling lights affixed to aluminum wire mesh forms of dolphins, dragons, turtles, and whales, as well as red, white, and blue displays to honor America.  The concept soon became a reality. 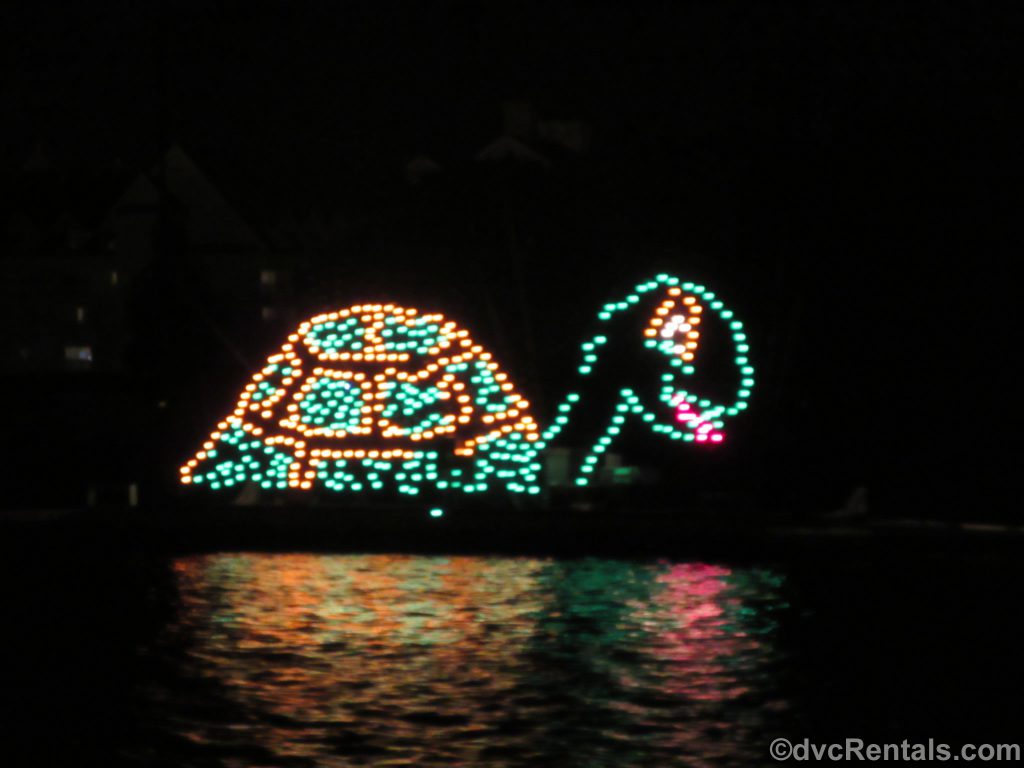 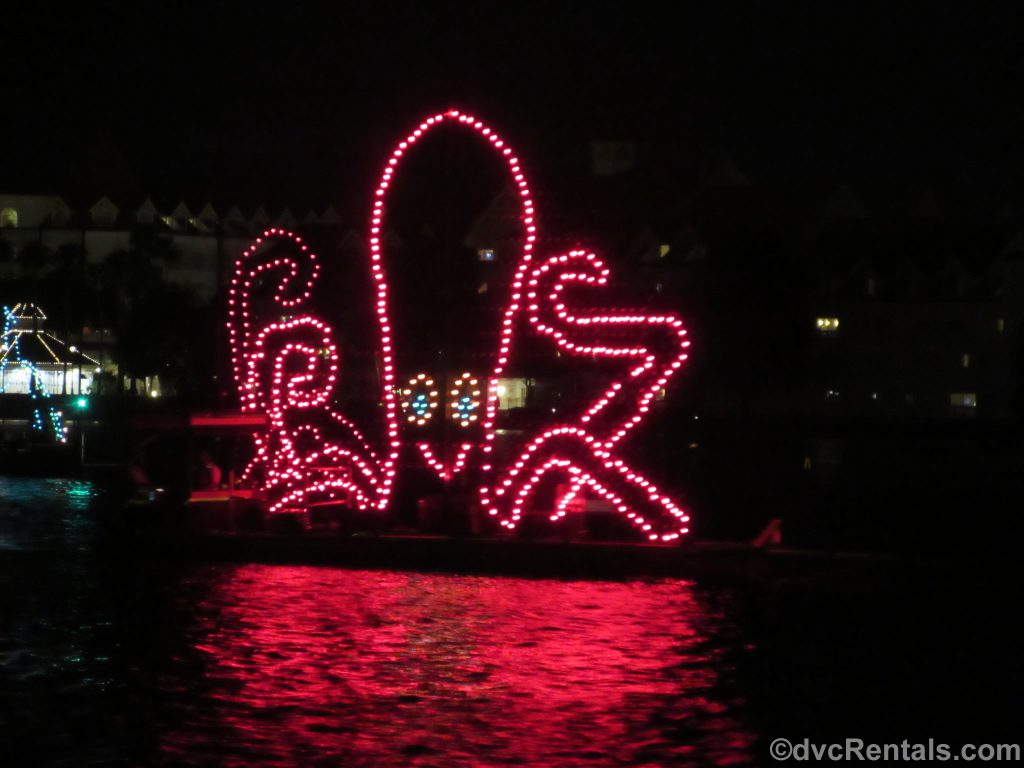 When the show debuted, it was an immediate smash hit with guests and continues to be almost 50 years later. Although it has changed a little since its debut in 1971, the Electrical Water Pageant is one of the few original opening year’s shows to still be running at Walt Disney World today. 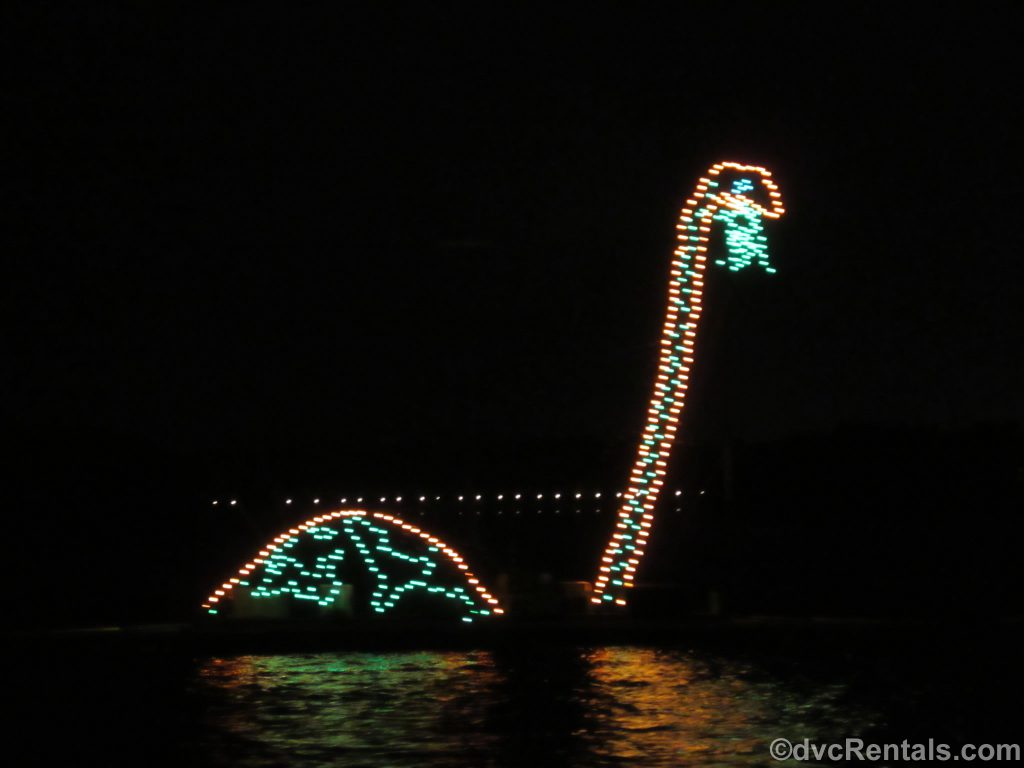 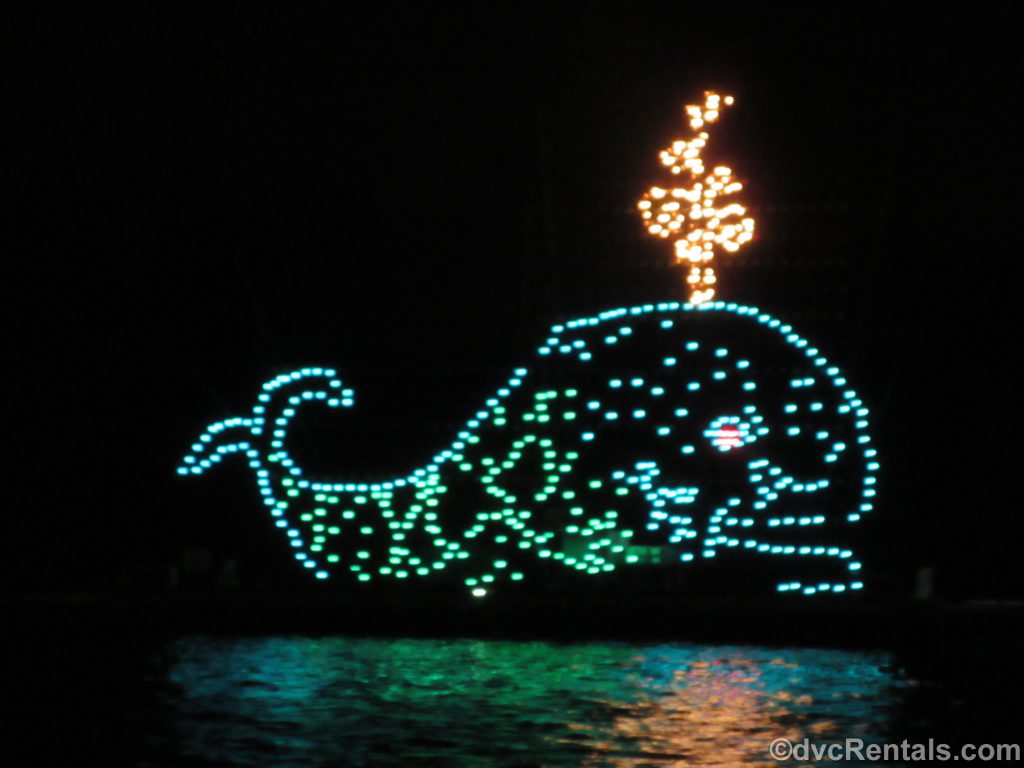 Currently, the pageant consists of fourteen 36-foot-long floats with lights attached to screens. These lights depict images of sea creatures as well as King Neptune. Guests see more than 50,000 light bulbs during the presentation. Disney replaces hundreds of bulbs each week to keep all the lights working properly and ensure a good show. 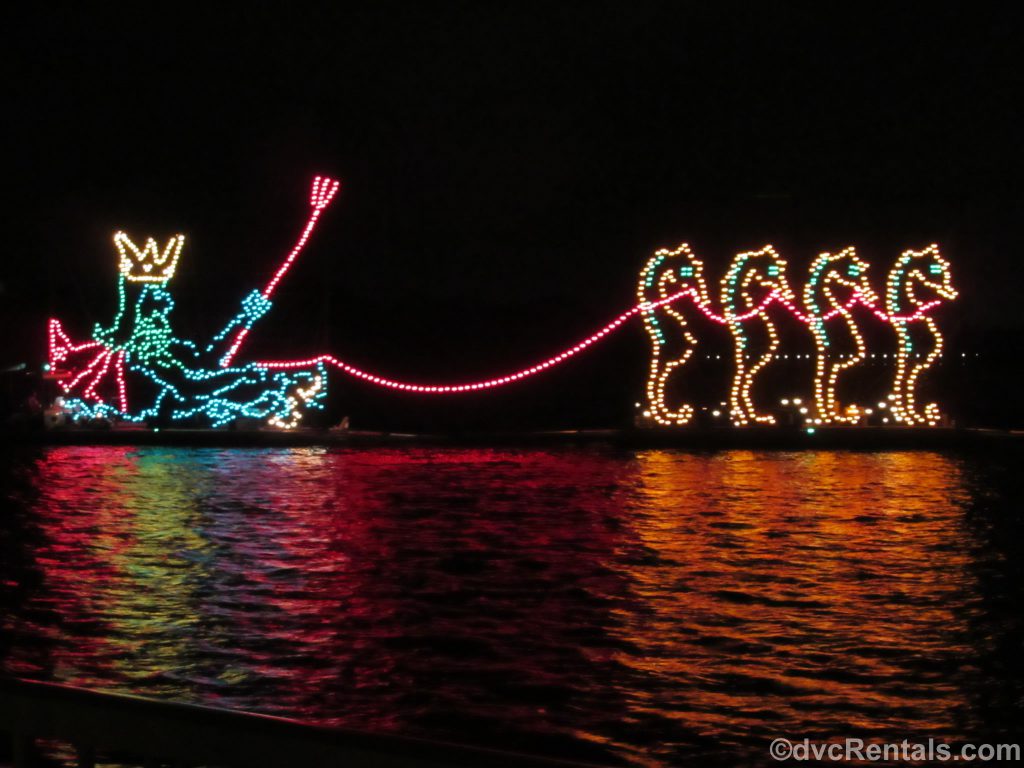 The floats each have their own generators, and each has an 800 watt speaker that plays Disney-themed music, as well as patriotic tunes. Each float is independent, so if one breaks down, the others can continue the performance.

Five Cast Members are needed to operate the floats. There are two pilots, two co-pilots, and one safety-boat operator.

The safety-boat operator manages any problems once the show is underway and also helps in moving the floats around corners. The pilots and co-pilots are connected with headsets so they can stay in contact in case any issues arise during the show. 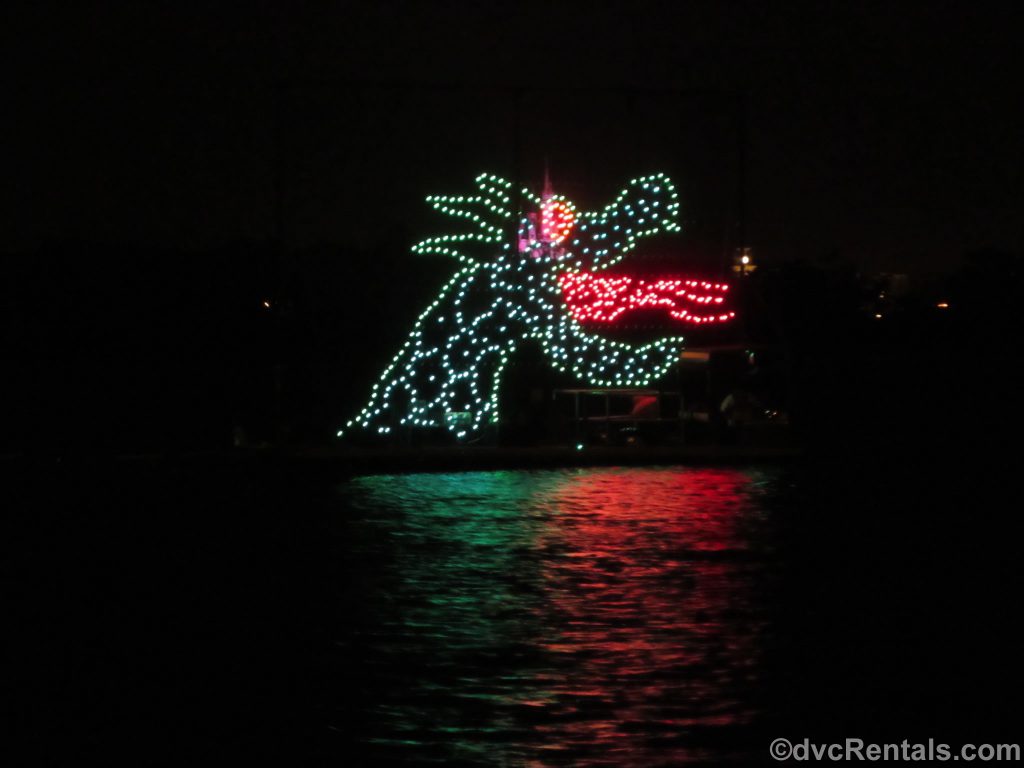 Each of the 14 floats gets into position, and then the first set of floats will signal the second set by light, so they are aware everything is ready to go.  The co-pilot on the very last float has master audio control. He or she flips a switch that causes the music to move from the final float to the first and ensures everything is synchronized. The co-pilots move switches to turn on the lights on the screens when he or she hears the appropriate music cue.

As guests watch from around the lagoon, screens light up one at a time, front to back, to reveal various sea creatures as well as King Neptune. There is musical accompaniment as we see each image revealed, one after the other until they are all lit up.  After a bit of time, these creatures turn to American flags, and patriotic music is played. 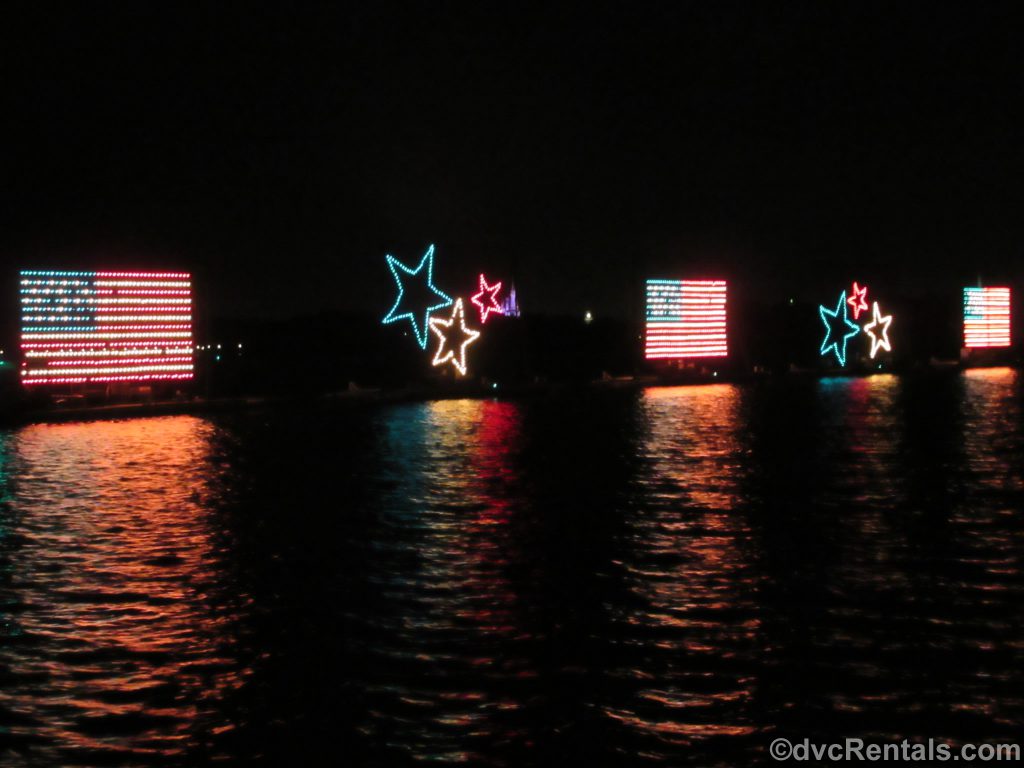 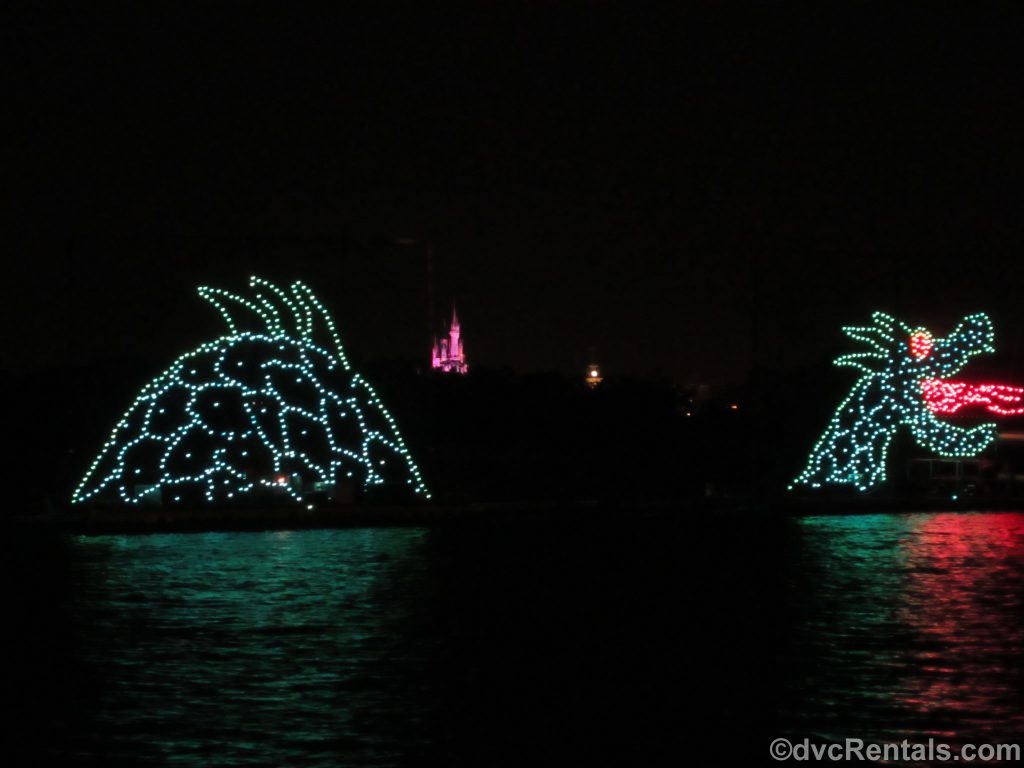 Although the pageant generally follows the schedule below, check My Disney Experience, Guest Relations, or with a Cast Member at your resort for times during your stay. Bad weather can cause the cancellation of the pageant. Once the show reaches you, it lasts about 15 minutes. 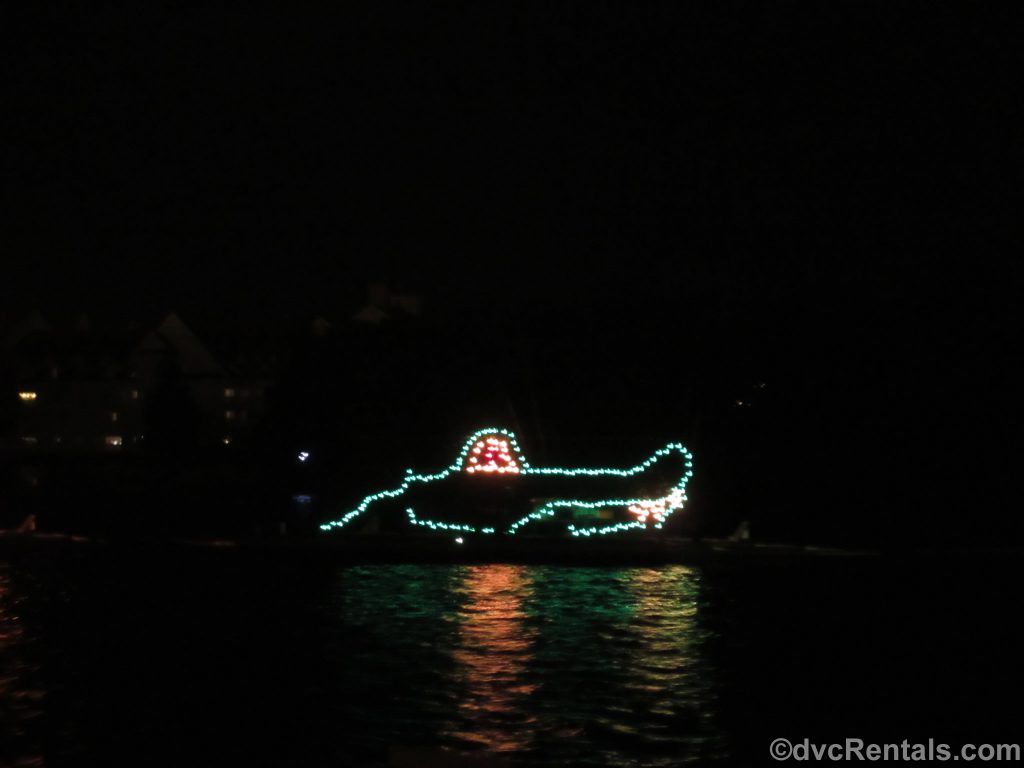 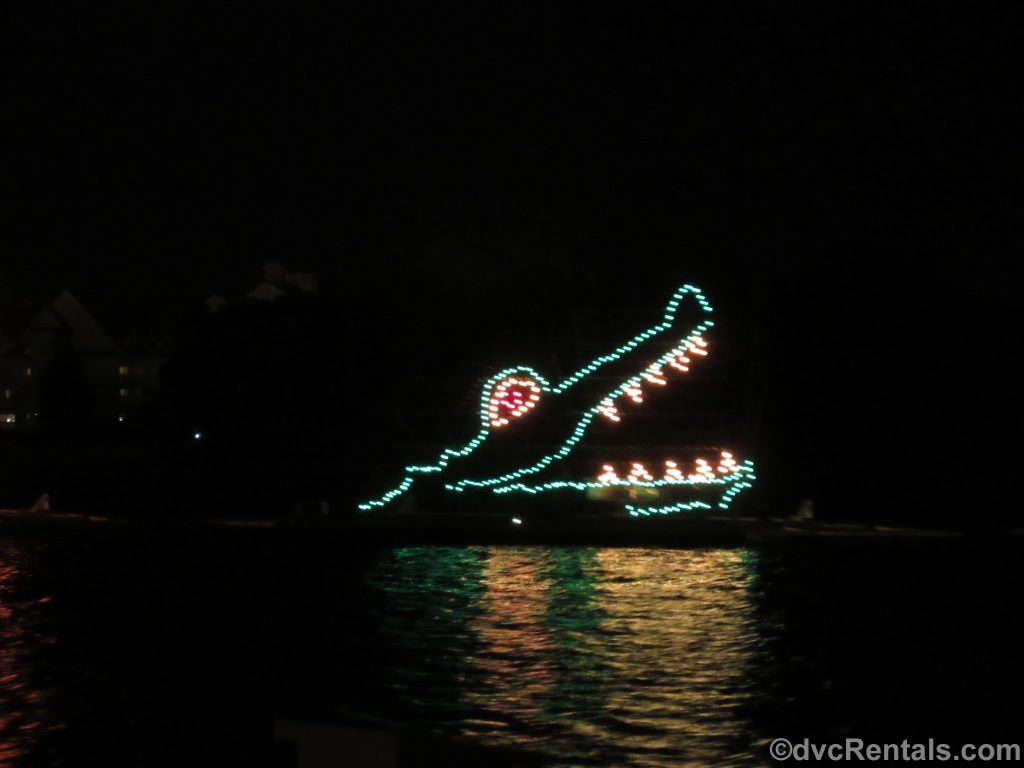 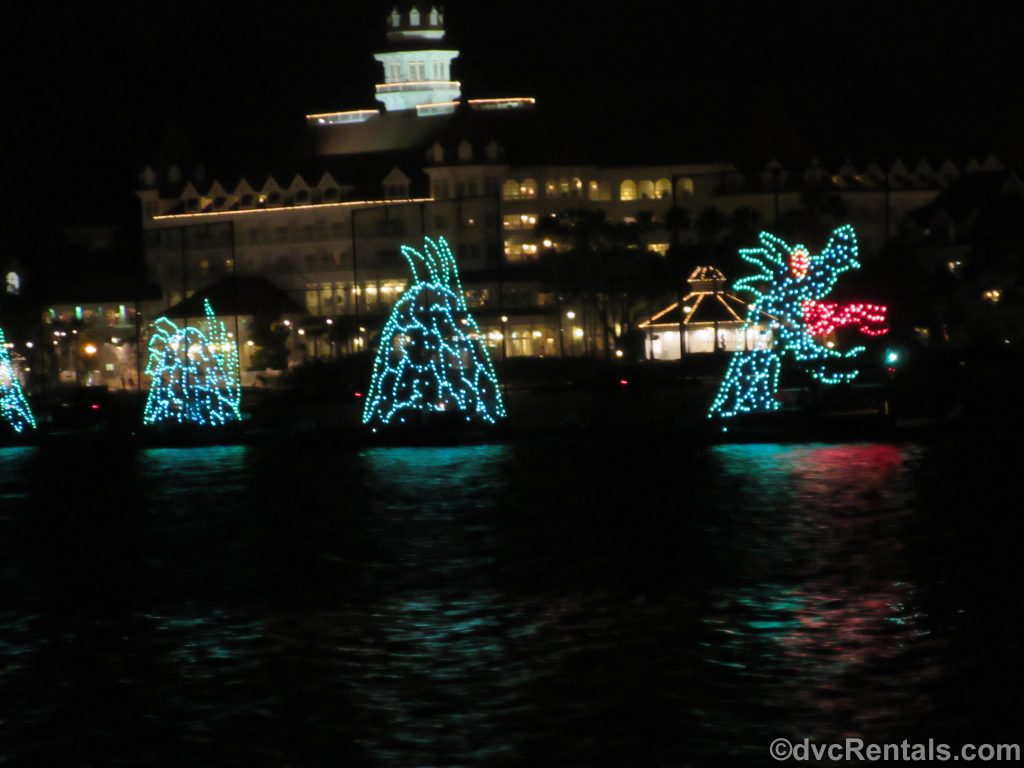 There is no charge to view this very enjoyable experience. If you are staying at one of the resorts on the Seven Seas Lagoon or Bay Lake, check the time and give it a look, there is a performance every night, weather permitting. Just walk down to the lagoon, and you’ll have a great view. But what if you’re not staying at a Lagoon resort?  Well, you have a few options.  You can take a bus from any of the major parks to any of the lagoon resorts. But be careful; you might not be able to get back to the park using Disney transportation if the park has closed for the night. In this case, you will need to uber back to your resort, or you can get a bus to Disney Springs (usually those buses run until 2AM). From Disney Springs, you can then catch a bus to your resort. 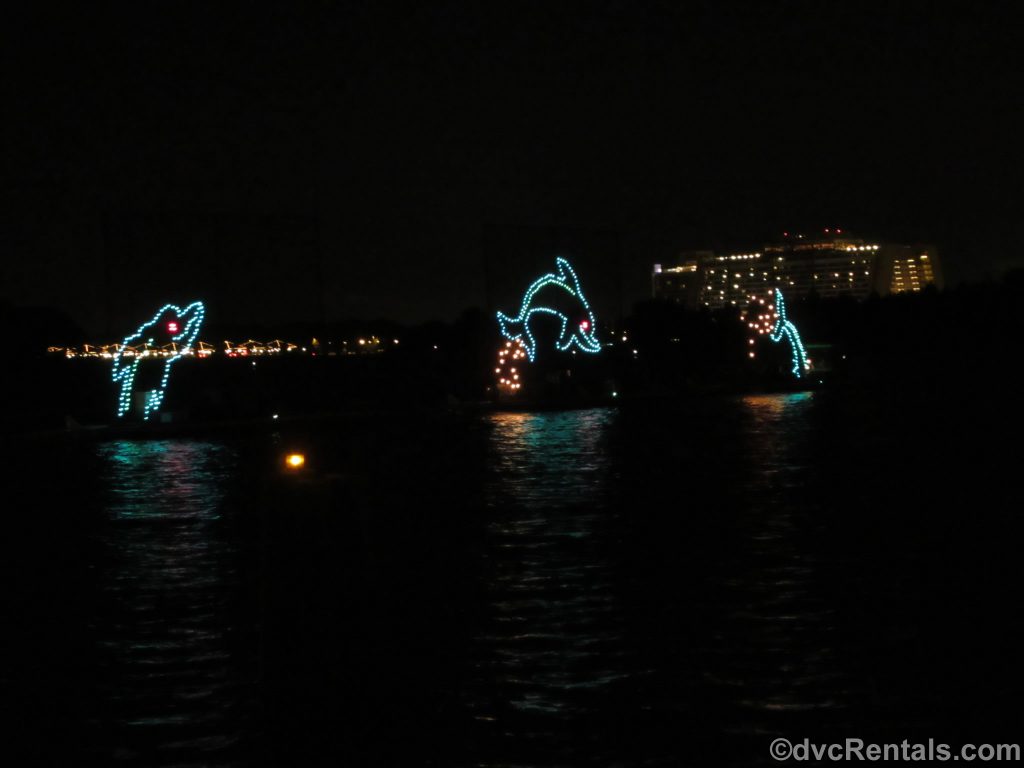 If you have a dining reservation, the guard will let you park at the resort if you show them your reservation. Try to time your reservation a couple of hours before the show is due to start, so you have plenty of time in case your meal takes a while.

Fun Fact: After noting the popularity of the Electrical Water Pageant, Disney’s then-CEO Card Walker wanted to offer Disneyland guests a similar nighttime experience. Bob Jani and project director Ron Miziker came up with the concept for the (currently not running, but a favorite of many) Main Street Electrical Parade!

When my kids were small, we stayed at the Polynesian Resort frequently. My daughters and I loved to hang out on the Poly beach and watch the show. I live locally now and make a dining reservation at a lagoon resort to see the pageant when the mood strikes. No matter where you see it from, the show itself is the same, and it’s always a lot of fun. I consider it a “must-do.”  If you have never experienced the Electrical Water Pageant, I hope you get the chance and decide to give it a try someday.