Once Upon a Dream; How I Discovered all of Walt Disney World’s Tiny Details

Back when I was a child, in the golden years of the mid-90s, my sisters and I were engrossed in our ever-growing collection of Disney movies on VHS. There was nothing more that we wanted to see than Cinderella’s castle glowing against that bright blue background. We loved almost everything about the movie-watching experience. From the bright ‘Disney’ logo and the series of trailers before the film to inevitably having to do the laborious rewind process.

There was, however, one thing we did not love; The Walt Disney World ads. For us, growing up on the East coast of Canada, Walt Disney World felt like something from another planet. So, watching that boy dragging a suitcase and telling his little brother about the wonders of Disney was like rubbing salt on the wound.

Fast forward approximately 20 years and many things have changed. VHS has fallen by the wayside, I moved halfway across the country, and I have become a Senior Vacation Coordinator with David’s Vacation Club Rentals.

I have been working for David’s for over a year and a half and, in that time, I have had the opportunity to learn something new about Disney every single day. While I had never had the chance to visit a Disney park before, my very knowledgeable coworkers made sure I learned everything I needed to know and then some. Of course, even with these great resources, some things you need to see to believe. 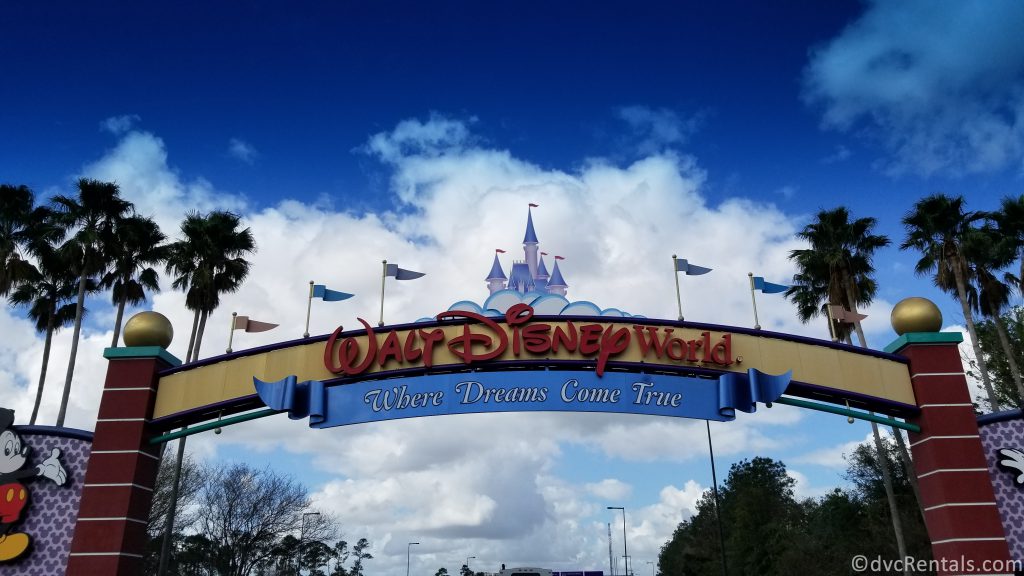 Before our plane even took off, I had high expectations of Disney when it came to the little things. I was very familiar with the resort photos and virtual tours on our website and had heard time and time again from my colleagues just how detailed the resort themes were. Even knowing those things, I was impressed by all of the Disney details right from the jump.

Let’s start with my ‘home’ for the week — Animal Kingdom Villas. I was already familiar with a lot of the ‘Lion King’ inspired touches of the villas 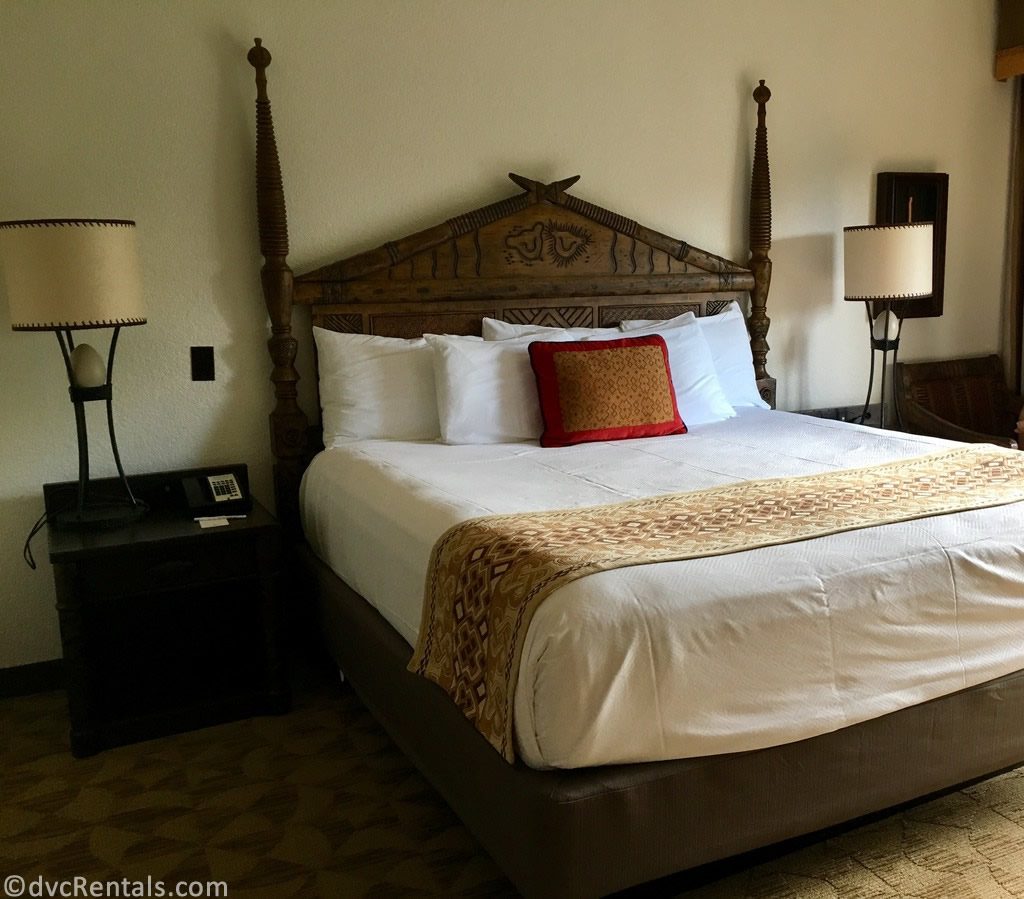 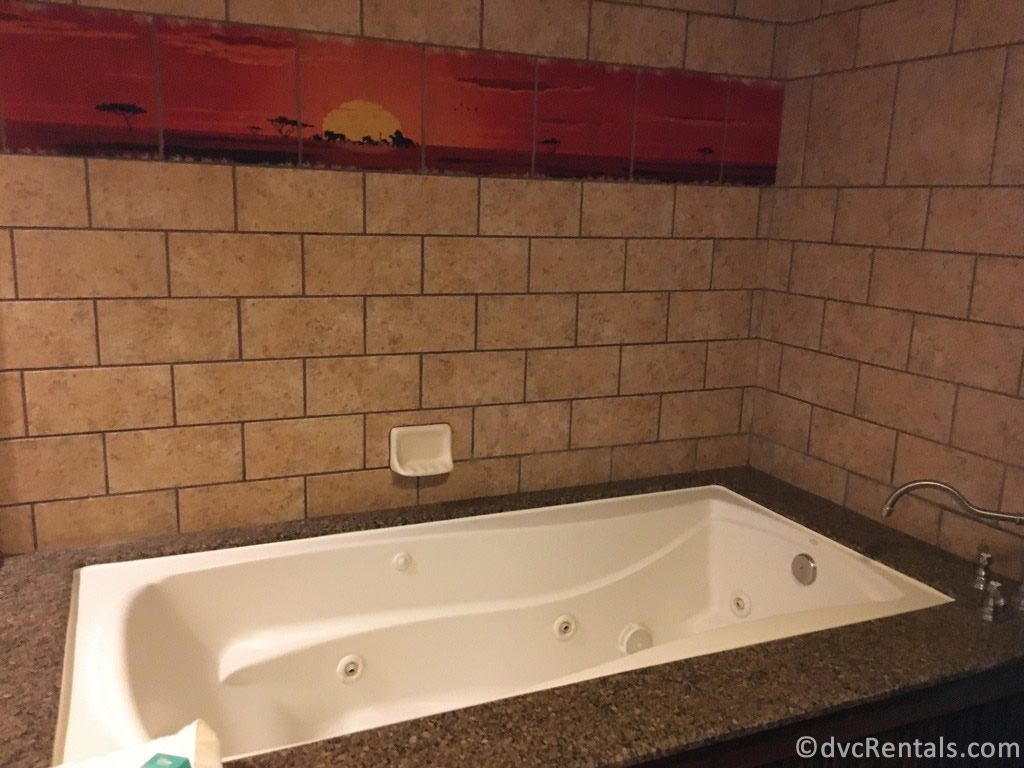 However, what was unexpected, and what truly impressed me was the reverence that Disney gives to the cultures from which they take their inspiration. Both in Kidani Village, where we stayed, and Jambo House, there were beautiful examples of art and artifacts from all over Africa. I quickly learned from a Cast Member that Animal Kingdom is home to the largest collection of African Art outside of the African Continent. 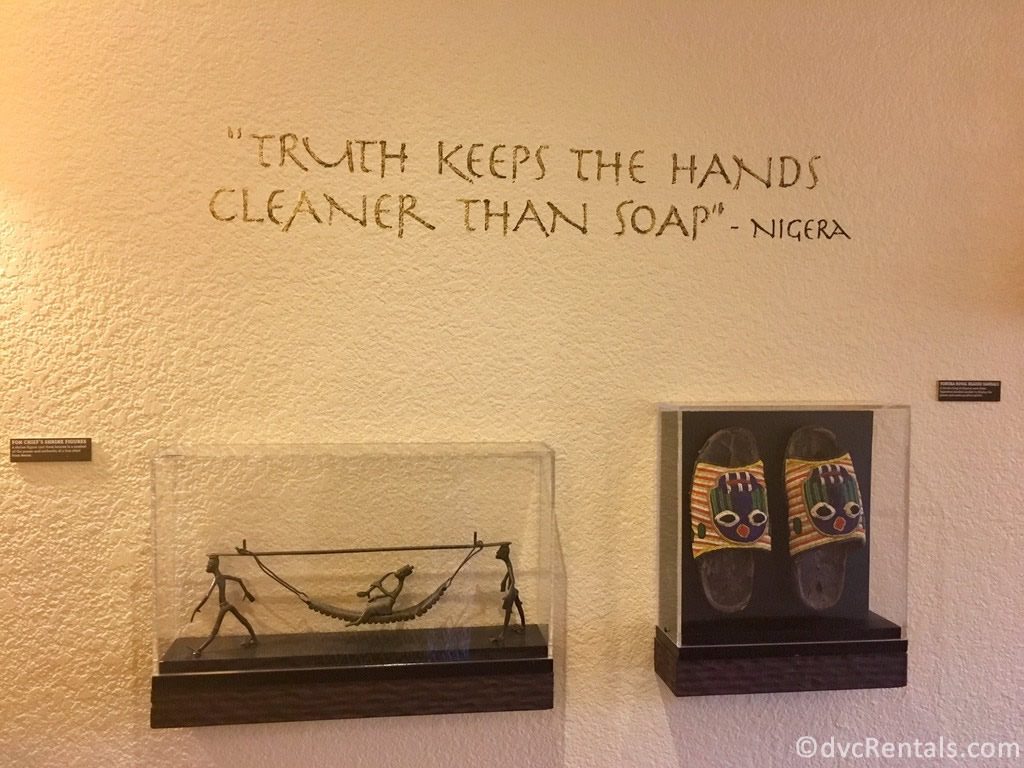 This reverence was not restricted to Animal Kingdom. It was also prevalent throughout Wilderness Lodge. The whole Wilderness Lodge area features beautiful, rustic architecture, but as you look around you can see where Disney incorporated authentic Native American elements. The lobby in particular features authentic artifacts from various Native American cultures, as well as the very impressive totem poles. 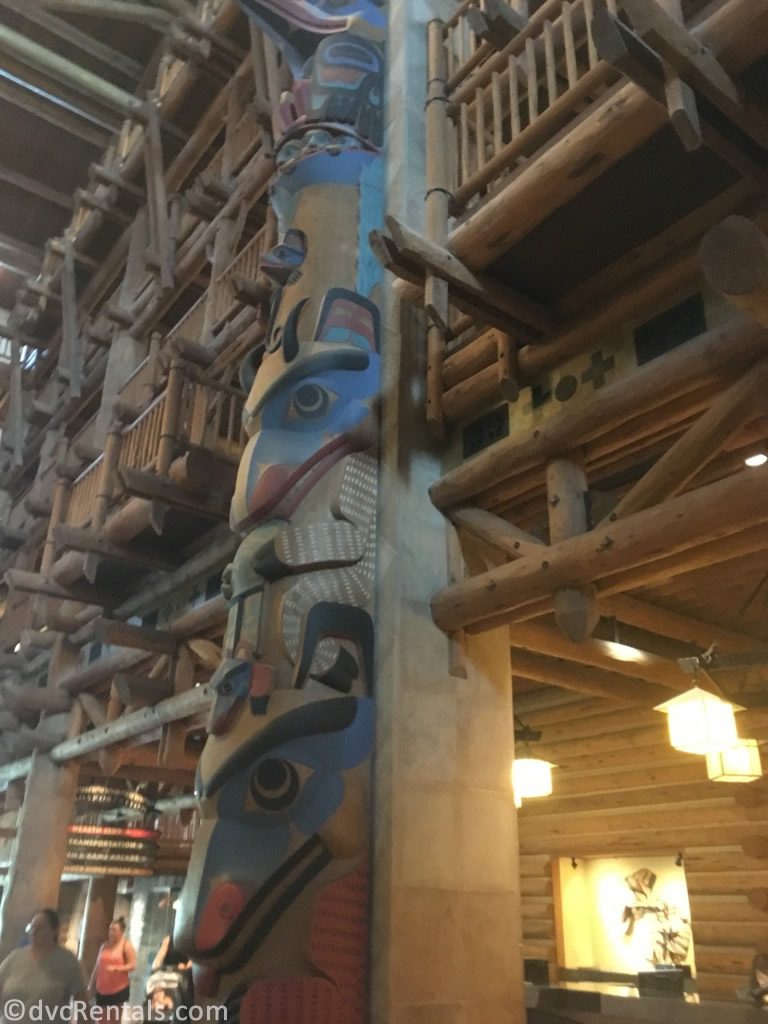 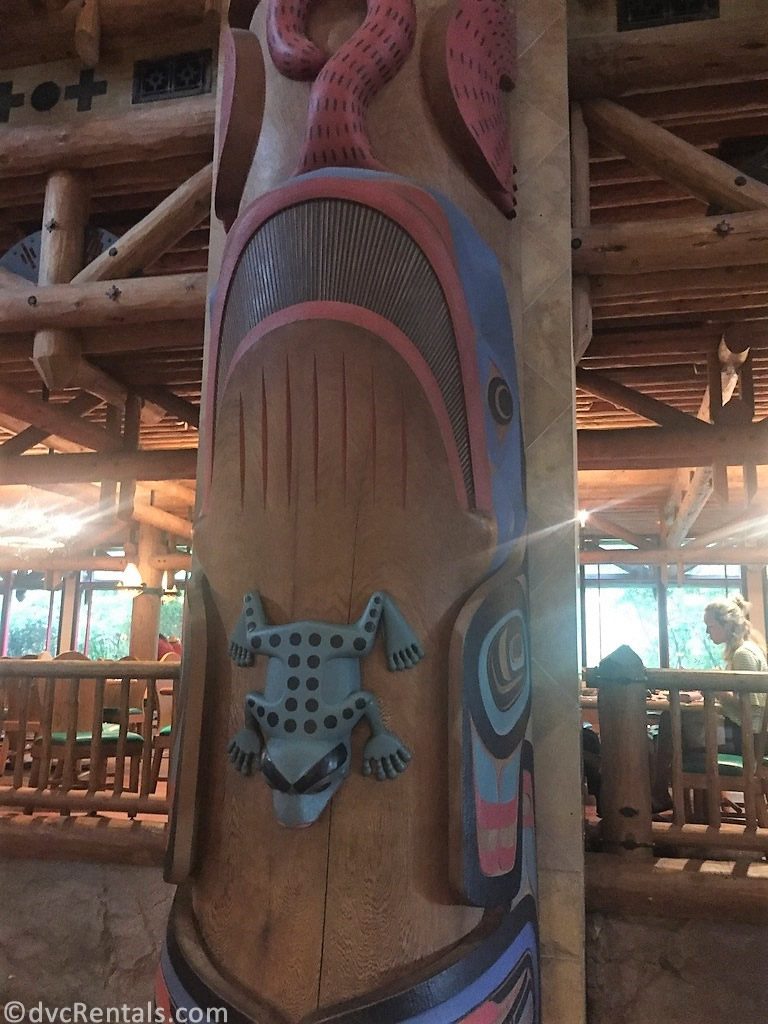 The attention to detail at the resorts was certainly not limited to cultural inspirations. I think a part of me was not surprised to learn that Disney had done their due diligence in dealing with different cultures, so while I was impressed, it was not shocking to see.

What did come as a surprise was the specific flora chosen for each resort. Walt Disney World features over 3000 plant species gathered from every continent except Antarctica, and it is clear that careful thought has been put into the best placement for each shrub and flower. The perfect example of this would be the Polynesian. 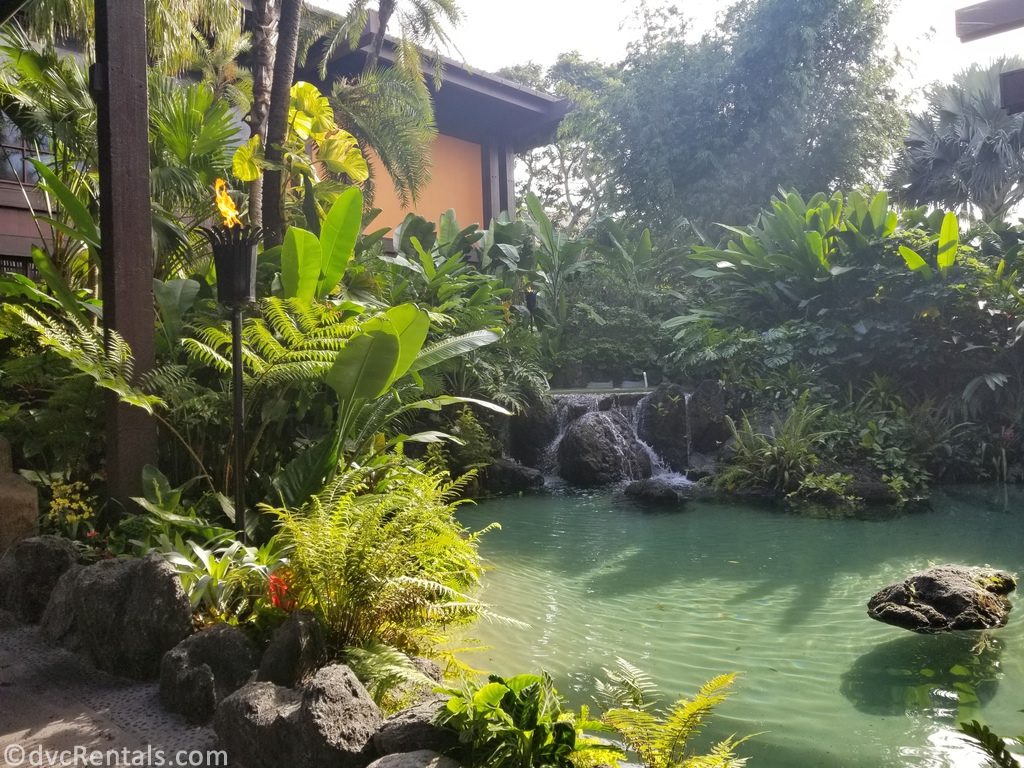 The Polynesian is meant to be a tropical paradise reminiscent of the South Pacific and, boy, does it deliver! Disney has brought in exotic tropical flora to make the resort grounds feel as if you’ve been transported right to the Pacific Islands.

At the risk of sounding like a bit of a nerd, it was fascinating to tour the different resorts and make note of the different plant life. Each resort had specific trees and flowers specifically selected to suit the area and theme.

Another small, but interesting thing I noticed on my trip is the actual layout of Walt Disney World.

I vividly remember when I first joined the team here at David’s. As someone who had never been to any Disney property, I felt a bit like a fish out of water. Even more than that, I remember staring at maps and feeling completely baffled. Luckily, maps don’t tell the whole story.

The first moment I really ‘noticed’ the proximity of everything at Walt Disney World was when we visited the Boardwalk area. 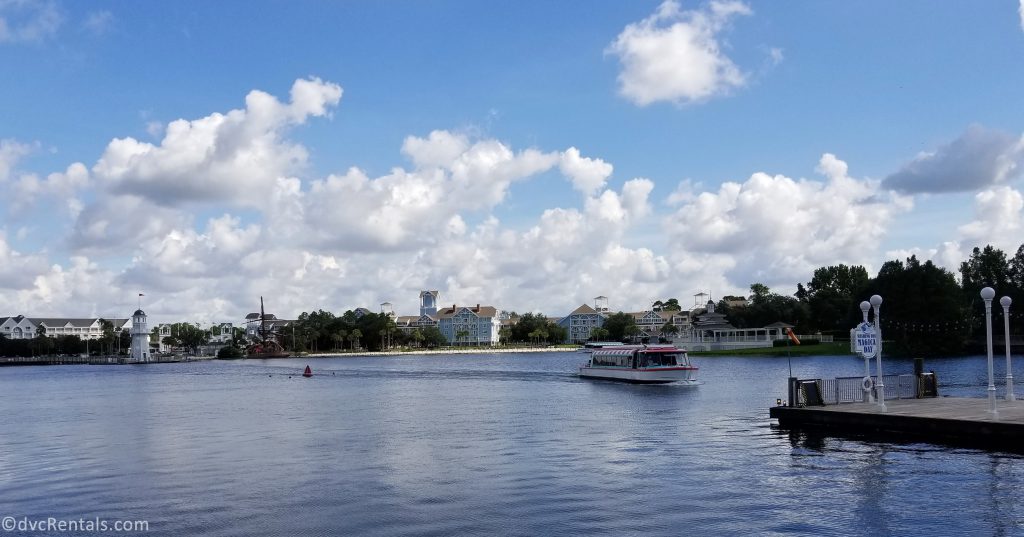 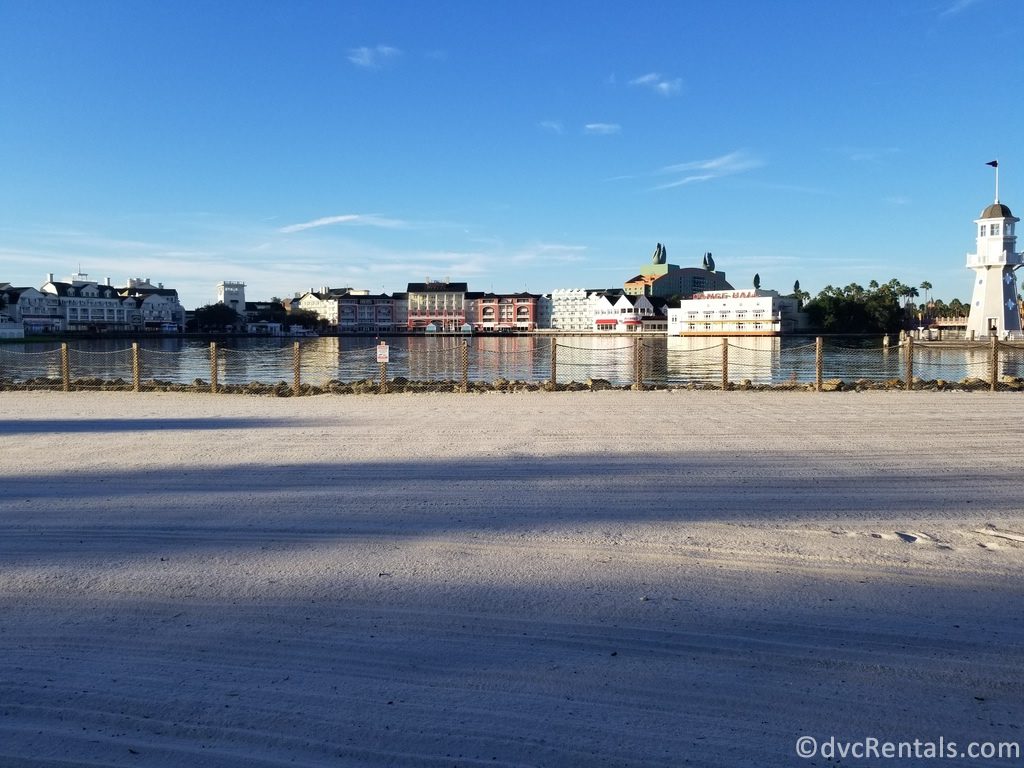 Not only was Disney’s Beach Club Villas a stone’s throw away, but when we were standing in the pool area, I looked up to notice that the Swan and Dolphin really are right there.

Of course, it would also be hard to talk about proximity without talking about Bay Lake Tower. This one wasn’t really surprising since the walk to the Magic Kingdom is one of the resort’s big selling points. But, like most things I discovered, seeing is definitely believing. The walk took us less than ten minutes at a very leisurely pace, though, I am sure if we were not trapped in the June midday sun, we could trim some time.

It was actually after our tour of Bay Lake Tower that we hopped over to the Contemporary to take my very first ride on the monorail. It was while we were waiting for our ride that we had a great Cast Member interaction that actually turned into a bit of a Magical Moment for me!

When you talk about Disney all day, you hear a lot about magical moments, and while they are always heartwarming, it is not the sort of thing that I ever thought would happen to me.

We were at the front of the line waiting for the next monorail and were fortunate enough to have a chatty Cast Member who was more than happy to tell us about his experiences working on the monorail (and also provide some fun trivia).

When the time came to board, we were escorted to the front of the monorail, and I was allowed (under very careful supervision) to hop in and sit in the driver’s seat. Luckily, we snagged some photographic evidence of me geeking out in the big boss seat of the green monorail: 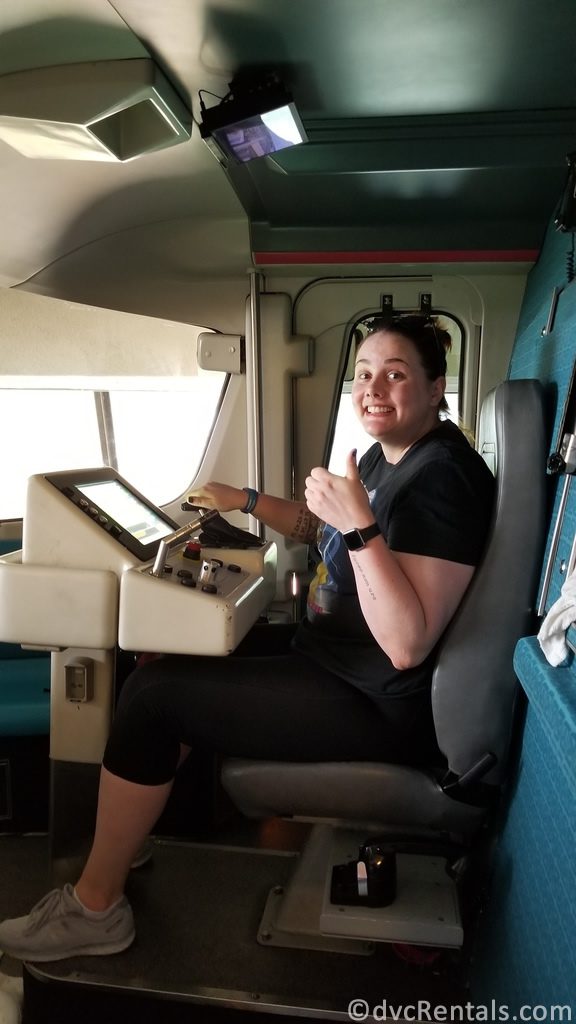 On my trip, I noticed how often Cast Members went out of their way for guests. There was a time when I thought that mentions of ‘extra pixie dust’ were cheesy and overly sentimental, but something really changes when you see those things in action.

At the Polynesian a Cast Member at the Great Ceremonial House noticed my birthday button and not only gave me a lei, but put even more flowers in my hair and taught my coworkers how to say “Happy Birthday, Heavenly Darcy” in Hawaiian (If I were not already pink in the face from the heat, I am sure I might have blushed).

In the end, I do think I forgive the precocious kid from the old 90s Walt Disney World commercials. It is hard to continue holding the grudge, especially when he was right all along. Once I finally got there, Disney really did bring out the kid in me. 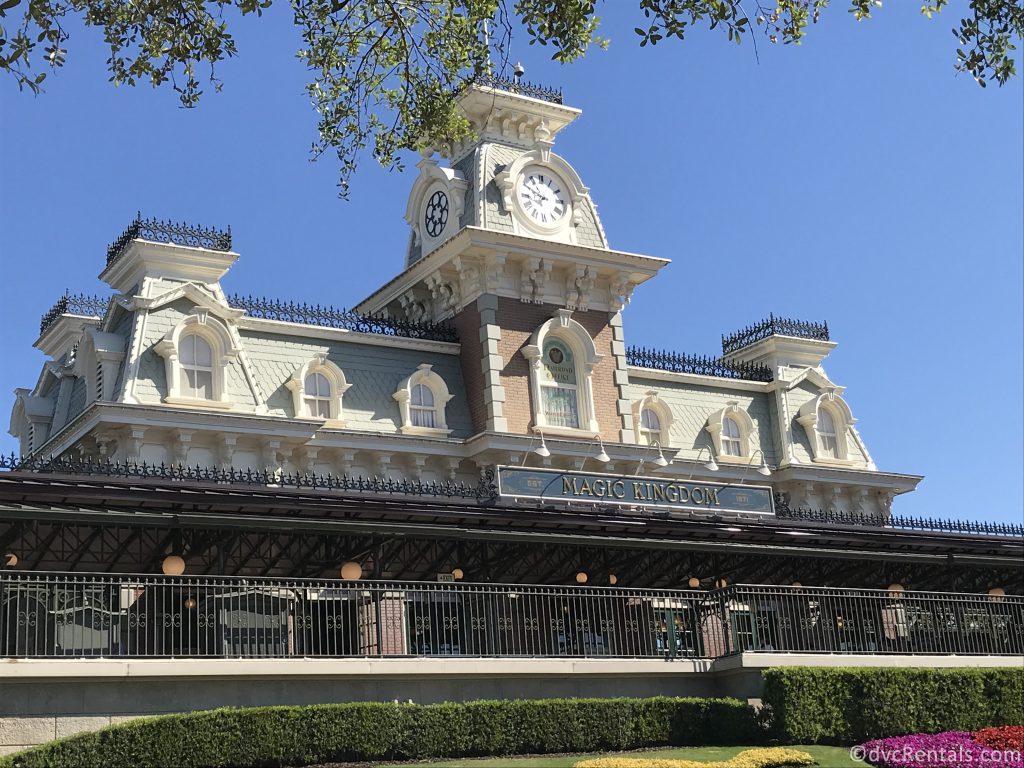