Often, we get hung up on getting to an attraction or a meal that we forget to look for the cool details that can be found all over Walt Disney World. 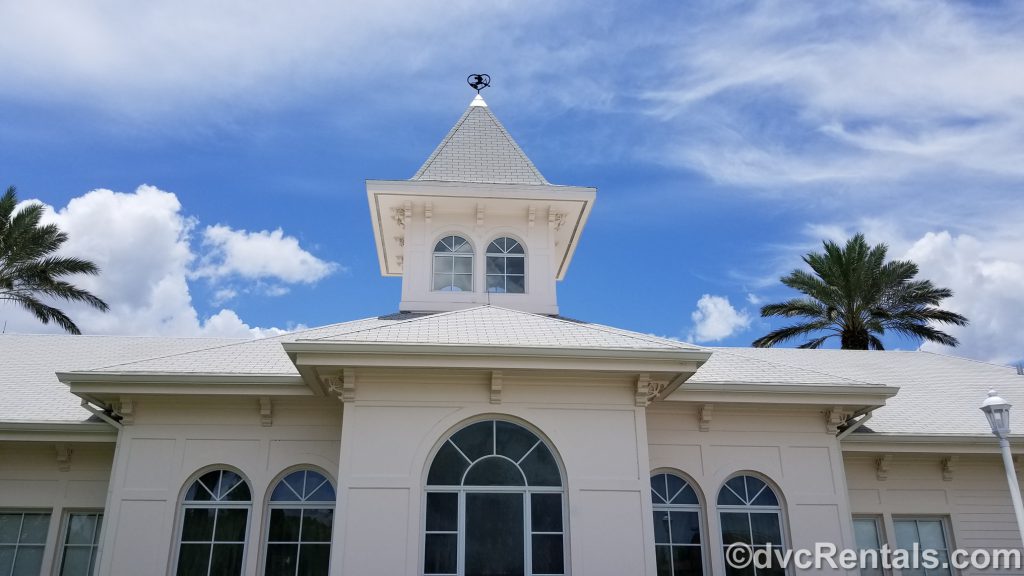 Sometimes there are really neat things that we miss just because we don’t think to look at certain areas.

One often neglected place to check out is the ceilings and things high on the walls at Walt Disney World.  Quite often, you can be standing underneath something very cute or interesting, but you don’t think to look up, and you miss it completely. 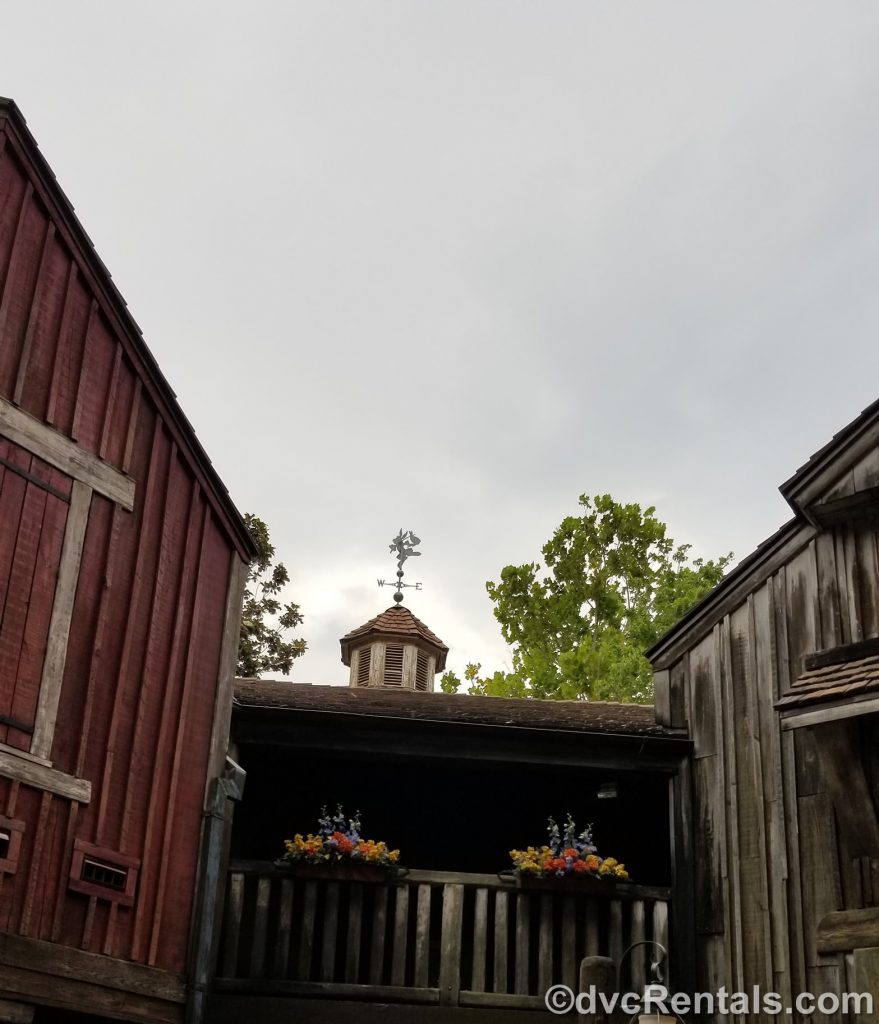 One of my personal favorites is no longer in existence.  The Great Movie Ride had a hieroglyphic of Mickey Mouse and Donald Duck up on the wall of the Indiana Jones scene. 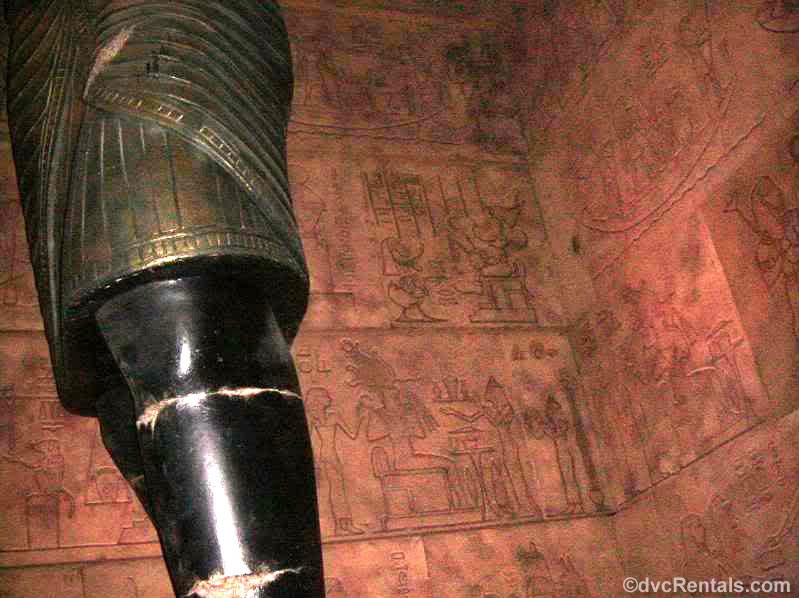 It was hard to spot because it was very dark.  I had to lighten up the picture I posted with this blog using a photo program.  But let’s not get caught up in what was, when there is still SO much more that still is! 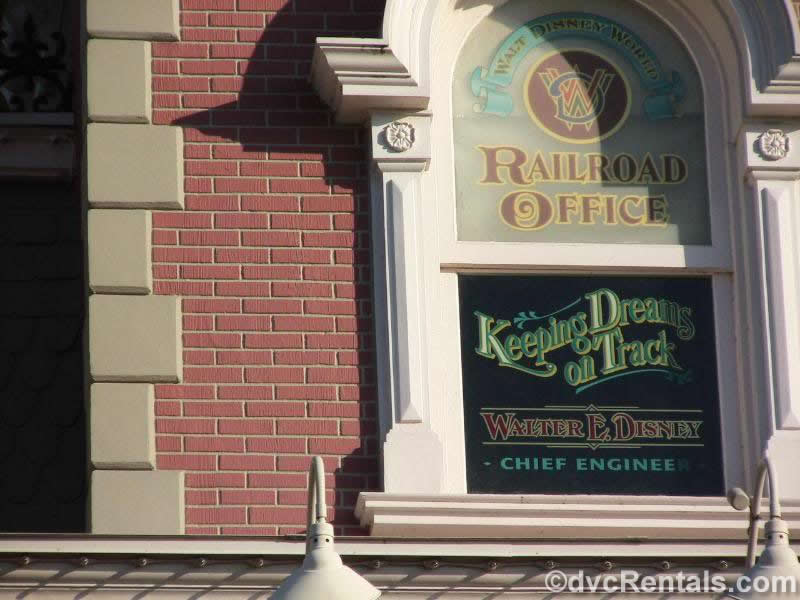 Some of the most well-known but still often overlooked overhead attractions are the windows on Main Street in the Magic Kingdom. Each window honors an Imagineer and makes a reference—often a pun—related to what role the Imagineer performed in the building of Walt Disney World. There are two windows for Walt. One at the entrance to the Magic Kingdom and one at the very end of Main Street USA, on the side of the Ice Cream Parlor. Walt’s brother Roy O. Disney and Roy’s son Roy E. Disney have windows. It’s fun to write down the names you don’t know and look them up to see what that Imagineer did to aid in the building of the park.  FYI: There are many, many names on the Main Street Windows; in fact, there are entire books devoted to the subject. You will recognize many familiar names, you’ll also see some that are more obscure, and you’ll learn about them all.  If you are an aficionado of Disney history, I highly suggest you checking out a book about the windows on Main Street. 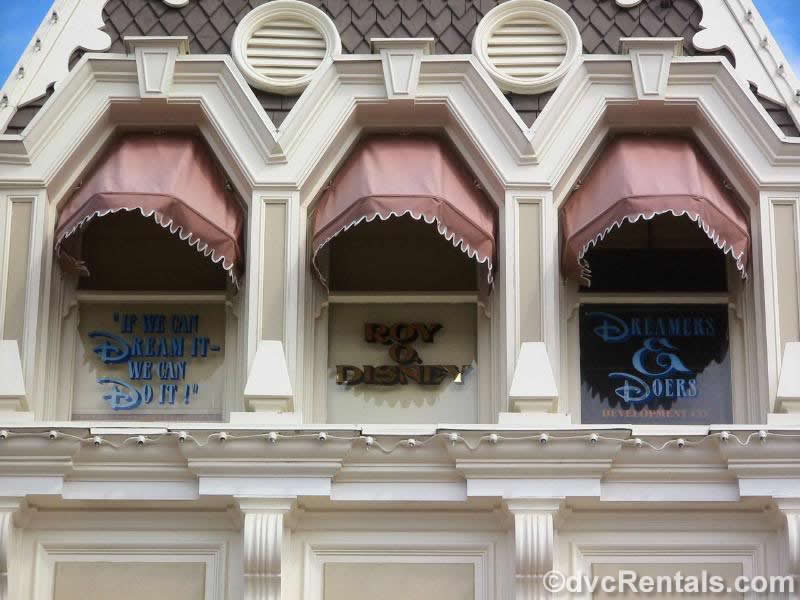 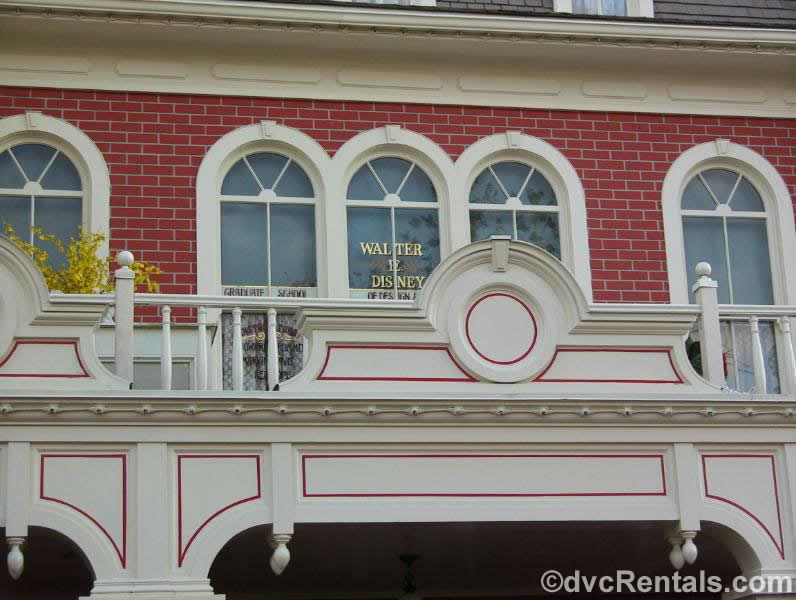 Another fun thing that many guests miss is the clock opening up on It’s a Small World. Starting at the top of the hour and every 15 minutes, the doors to the clock will open, and you will see adorable figures inside, as well as the time displayed using HUGE numbers. Even though this is out in the open, many guests don’t notice this cute little perk. The doors open and close quickly, so it’s easy to miss if you aren’t looking for it. 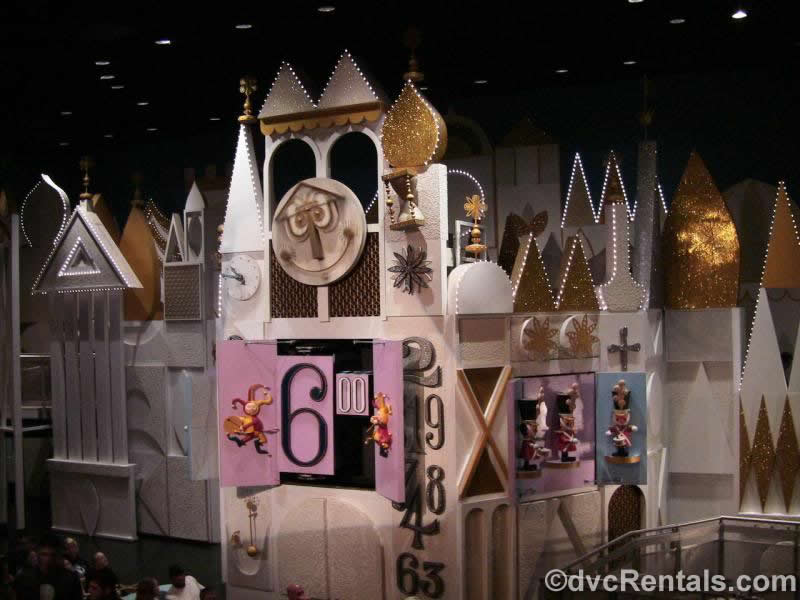 Where else can you see surprises if you look up?  The answer is just about everywhere, but here are some of my favorites:

Liberty Square, next to The Hall of Presidents in the Magic Kingdom:  This comes and goes, but check to see if there is a Muppet show happening during your next visit. They stick their heads out of windows high above the crowd and do fun routines. 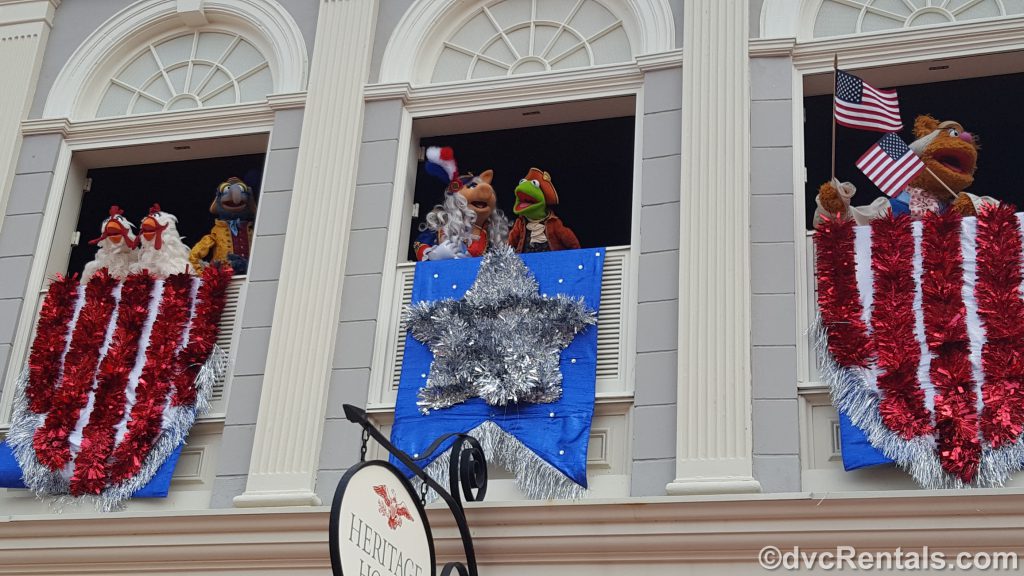 The ceiling of Journey into Imagination at Epcot, during the “tour” of Figment’s House, is full of funny objects that are all upside down (This one is probably obvious to most guests, but I couldn’t leave it out. Each time I ride I seem to find something up there I didn’t notice before). 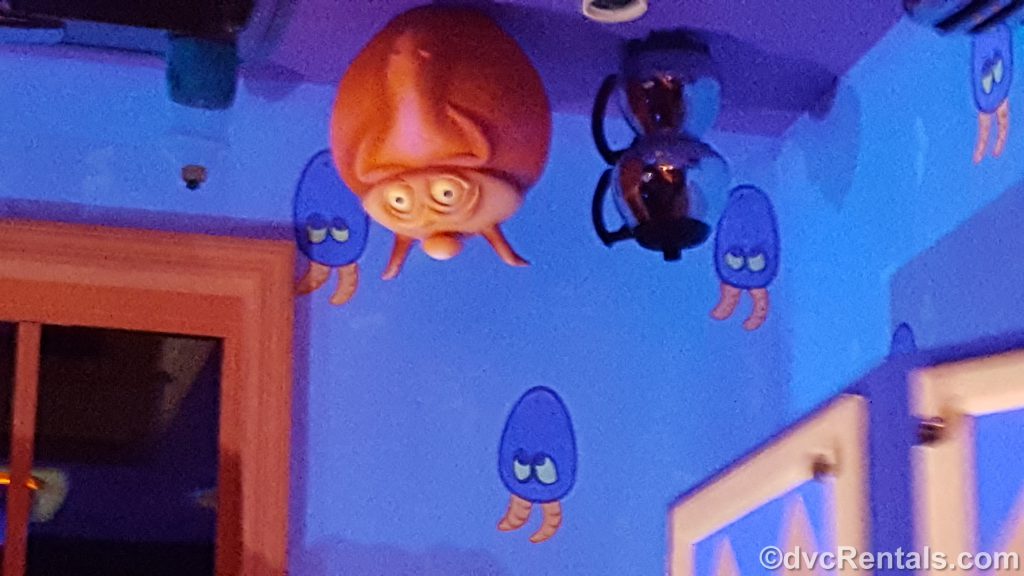 On Navi River Journey at Animal Kingdom, there are a number of cool things to see if you look up at the ceiling during your trip. This includes a number of animals and beautiful lighting effects.

Likewise, the ceiling at Toy Story Mania at Hollywood Studios is chock full of fun things to enjoy, such as huge versions of popular board games. 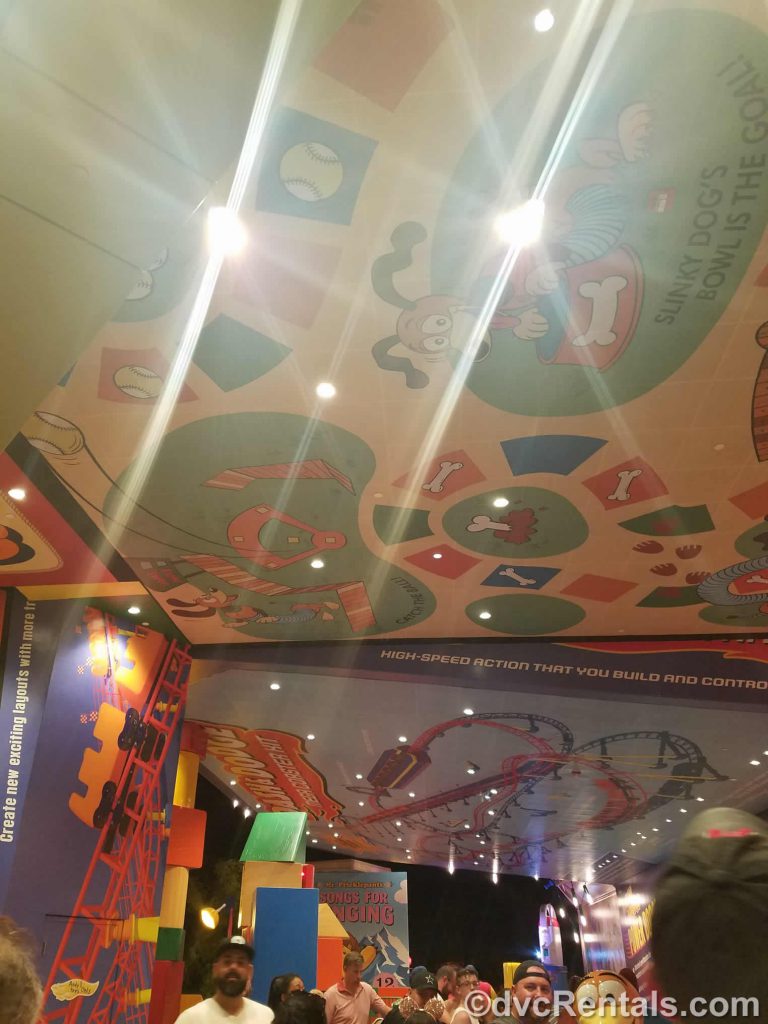 Many Disney characters can be seen high above the crowds at the Magic Kingdom. Check out the Train Station platform on Main Street, the rear of the Cinderella Castle, and the rooftops in Frontierland (There are not always characters in these spots, but they make frequent appearances). 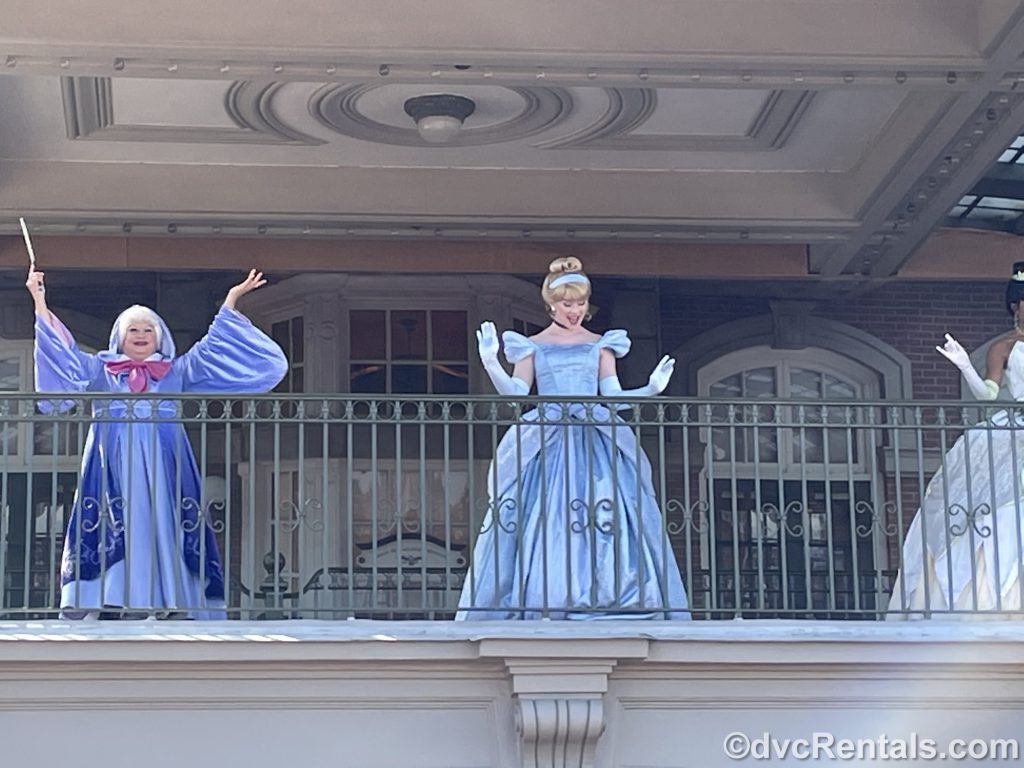 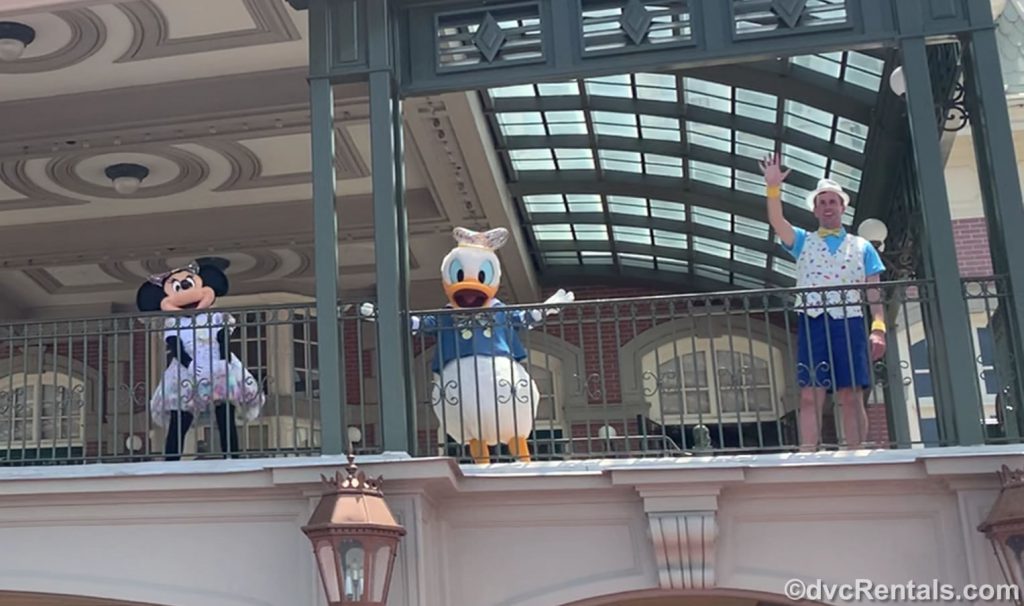 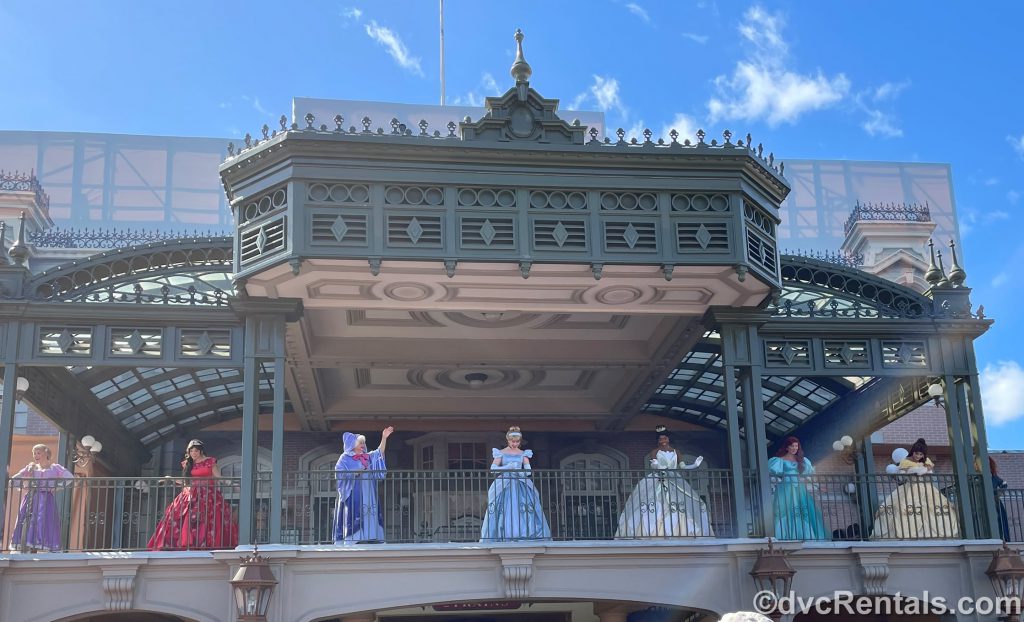 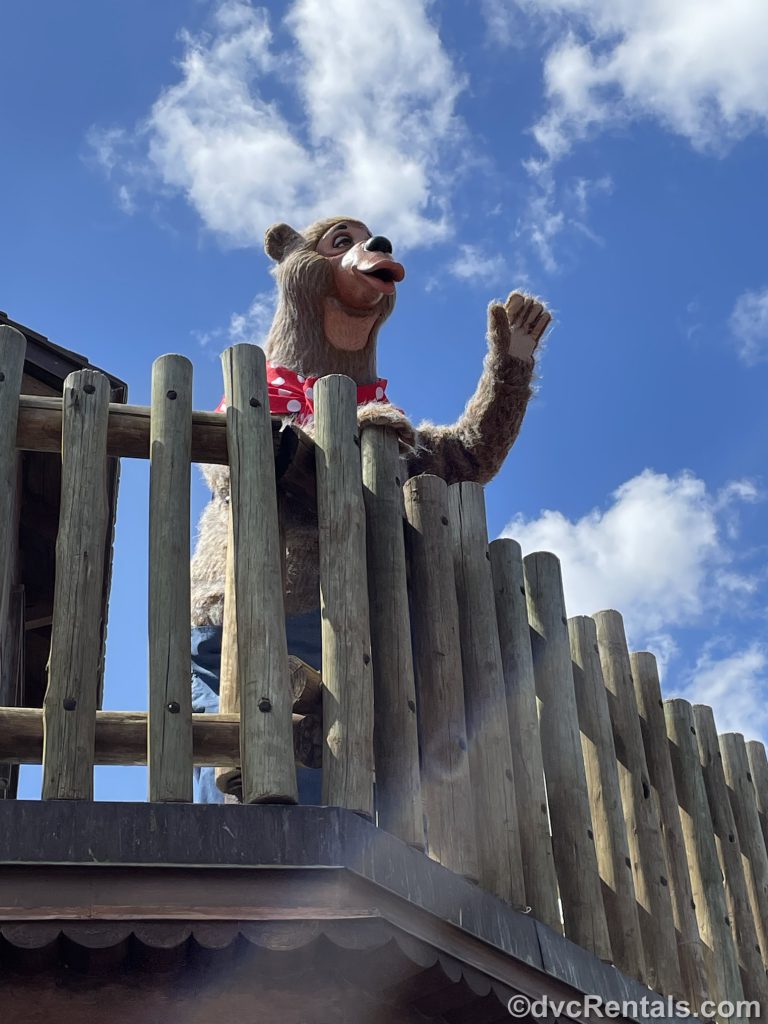 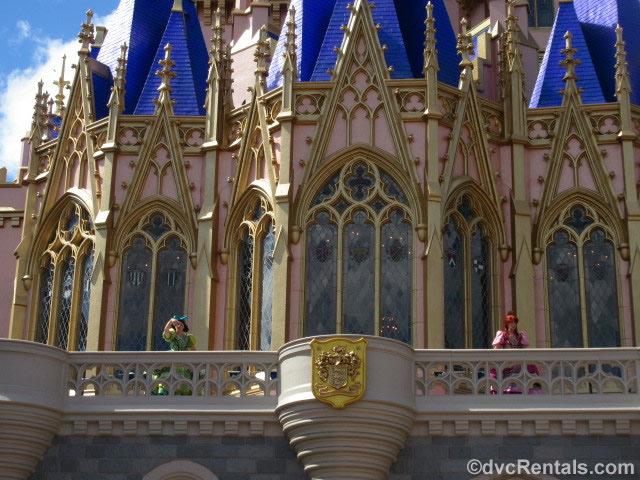 If you are staying in a resort with a covered balcony, check for bird’s nests! I have stayed at Disney’s Boardwalk Villas more than once when a mama (or papa) bird was feeding babies in a nest on my covered balcony. 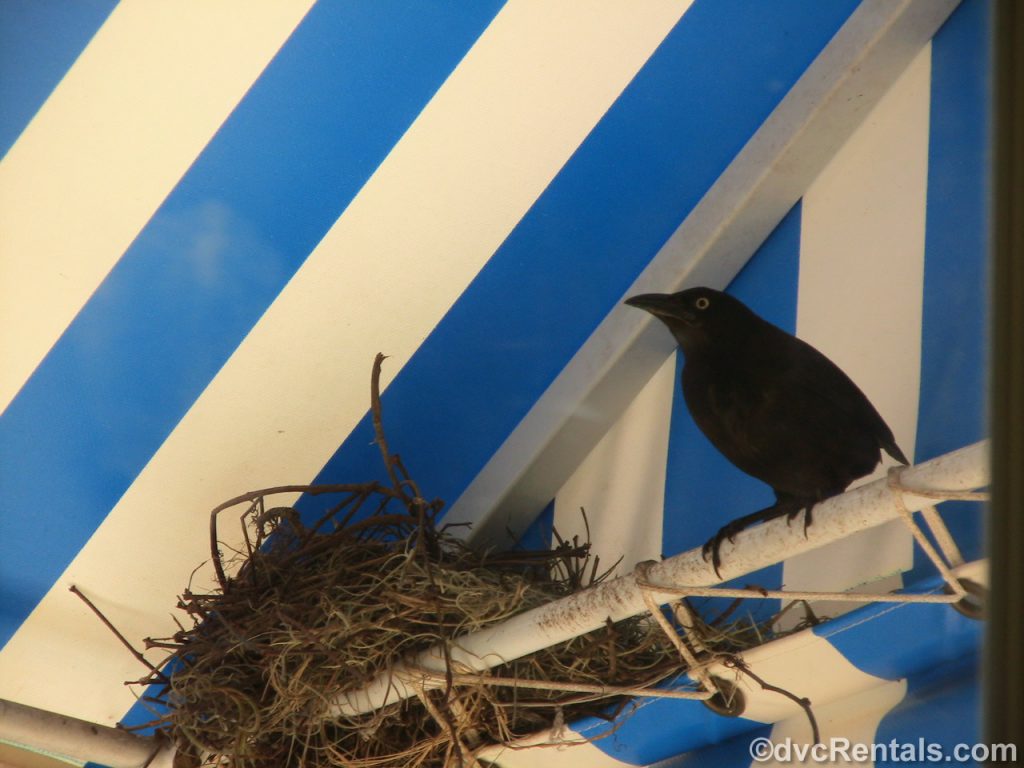 The upper walls and ceilings of many of the shops at Walt Disney World have cool items displayed. For example, Canada has a fish with a hidden Mickey on its body up on the wall in the Northwest Mercantile store. 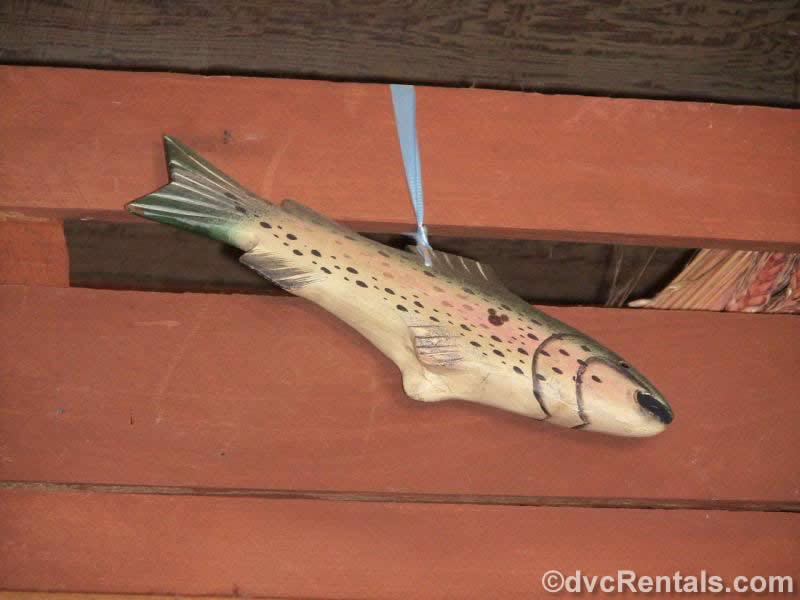 Outside the Northwest Mercantile store, there is a totem pole. Look high up on the left side of the pole, and you will spot a very distinct hidden Mickey. 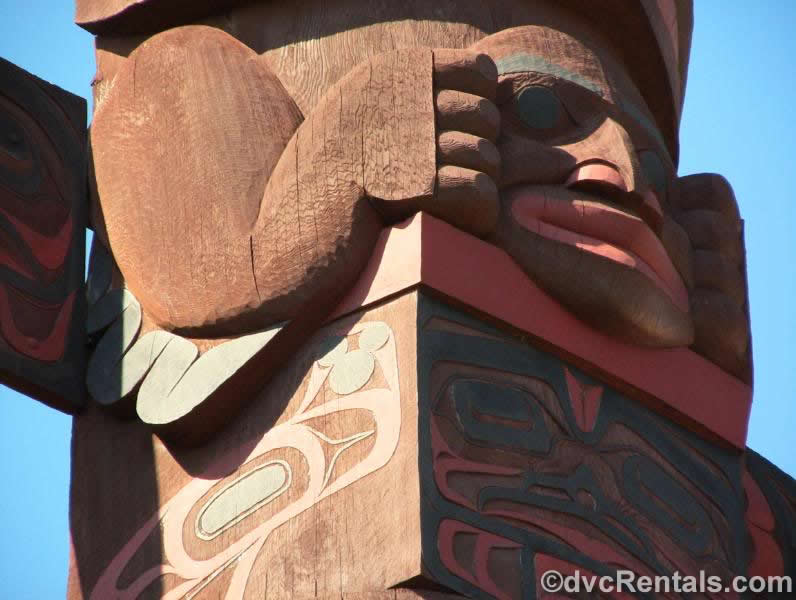 The chandeliers on the ceiling at Philharmagic in the Magic Kingdom are often overlooked. 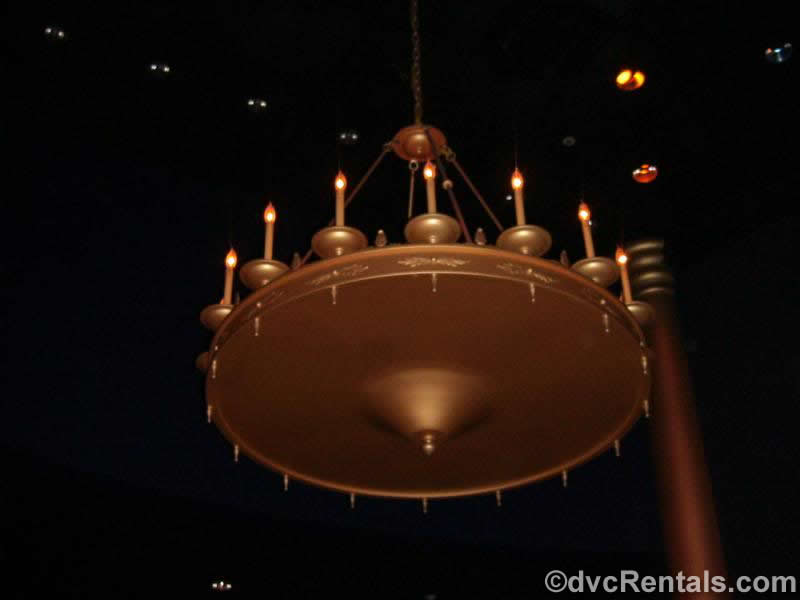 The Co-op at Disney Springs has all sorts of interesting items hanging from the ceiling. 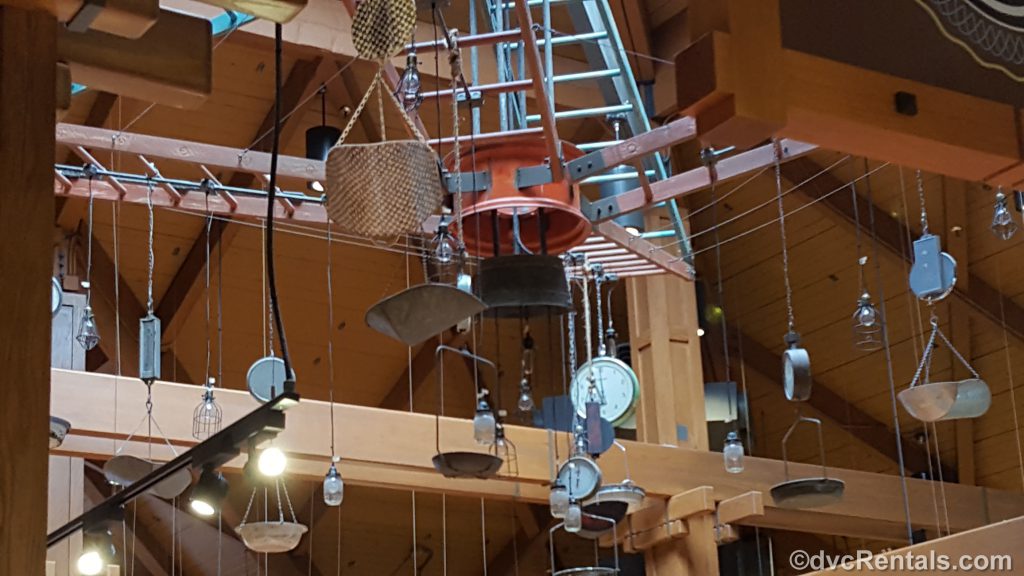 You may have noticed the figures high up on the right as you enter Germany at Epcot. But did you realize they have hidden Mickeys in the center of the crowns they are wearing? 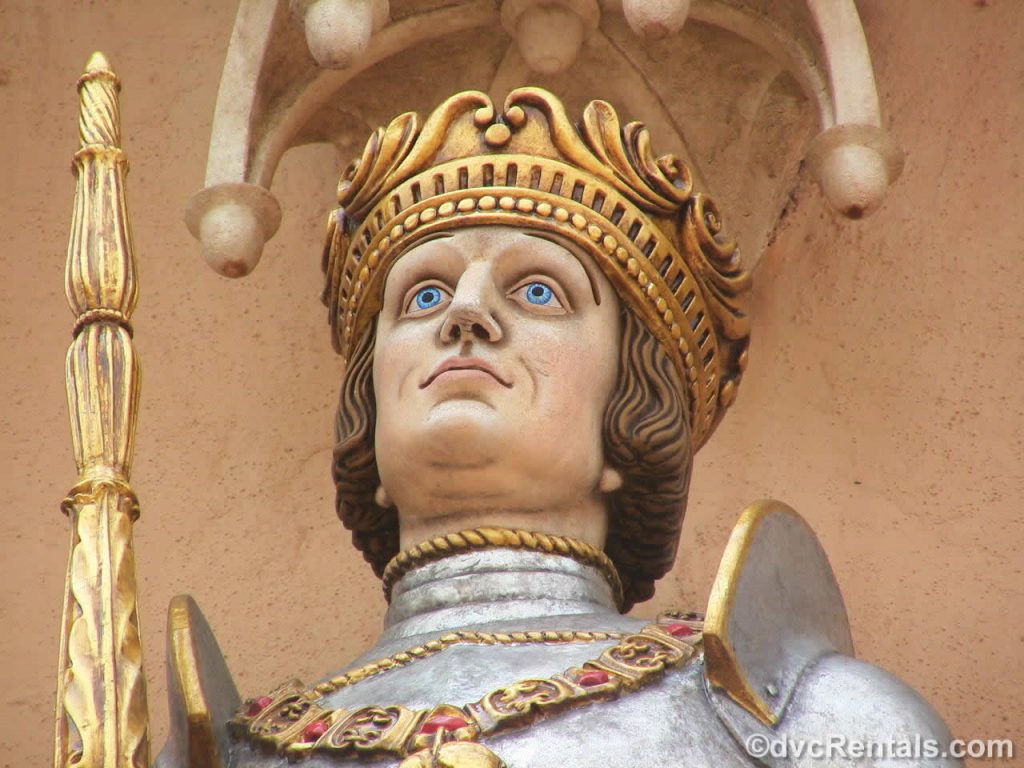 The Haunted Mansion in the Magic Kingdom has a number of things to look up for. During the day, you will see two huge chess pieces and a weather vane. At night the windows light up, and if you are patient, you’ll see shadowy figures walking by.  There is also “lightning” at the mansion in the evening, but you may have to wait a bit to see it; the effect seems to be random. 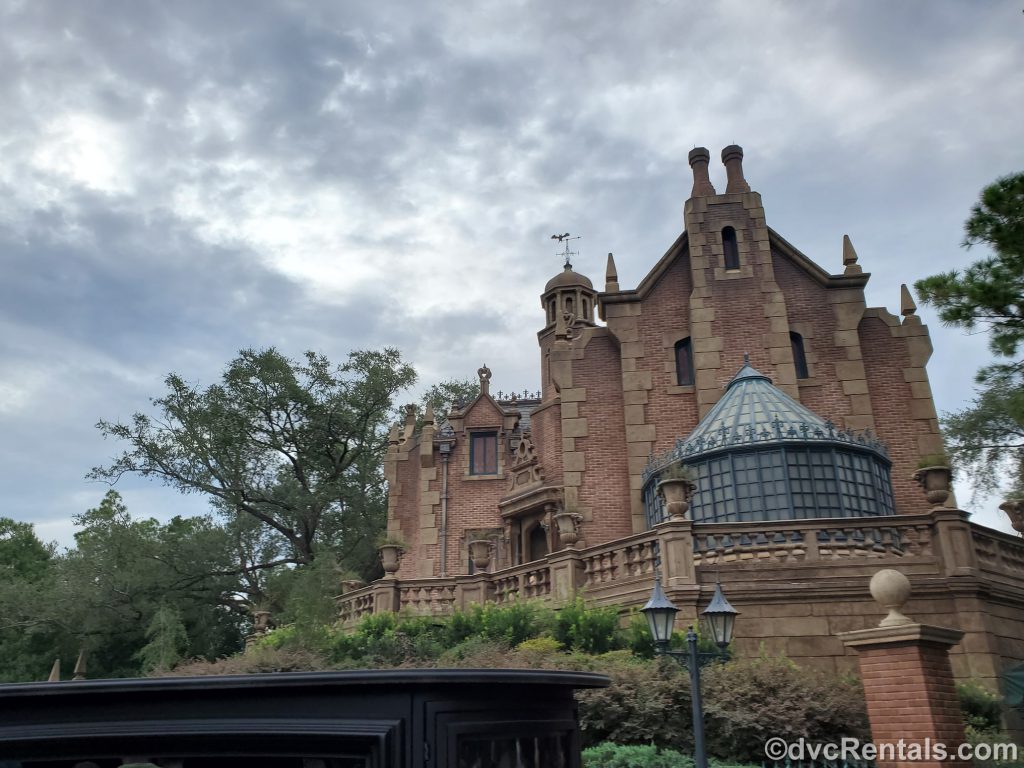 The theater marquee at Walt Disney Presents in Hollywood Studio changes frequently. Be sure to check it to see if any new movie previews are being showcased during your visit. 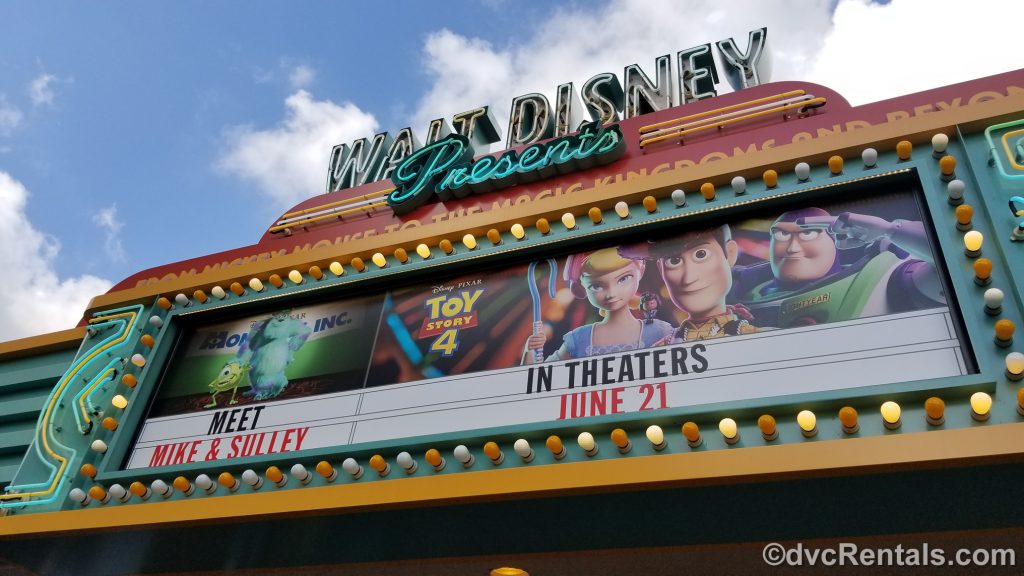 The Frontierland buildings in the Magic Kingdom all have numbers on them, signifying the time in history those buildings were based on. 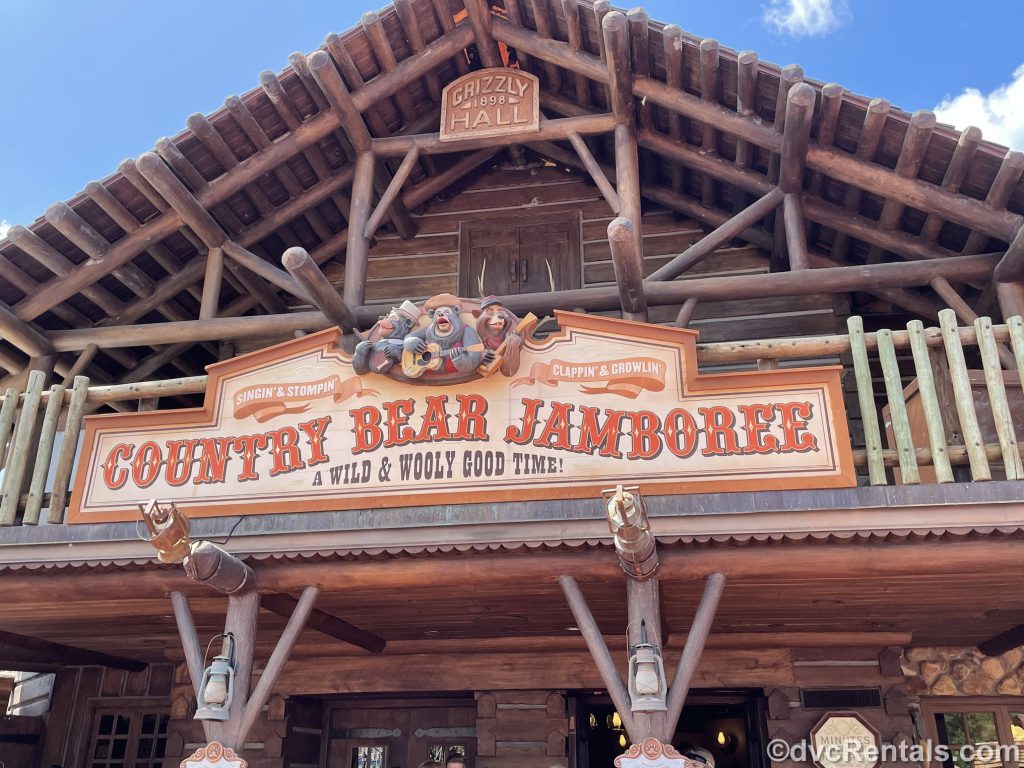 MuppetVision at Disney’s Hollywood Studios has two neat things to look for high up on the front wall of the attraction.  Sweetums is holding a 3 Dimensional paddle ball toy, and Gonzo is hanging from a clock! 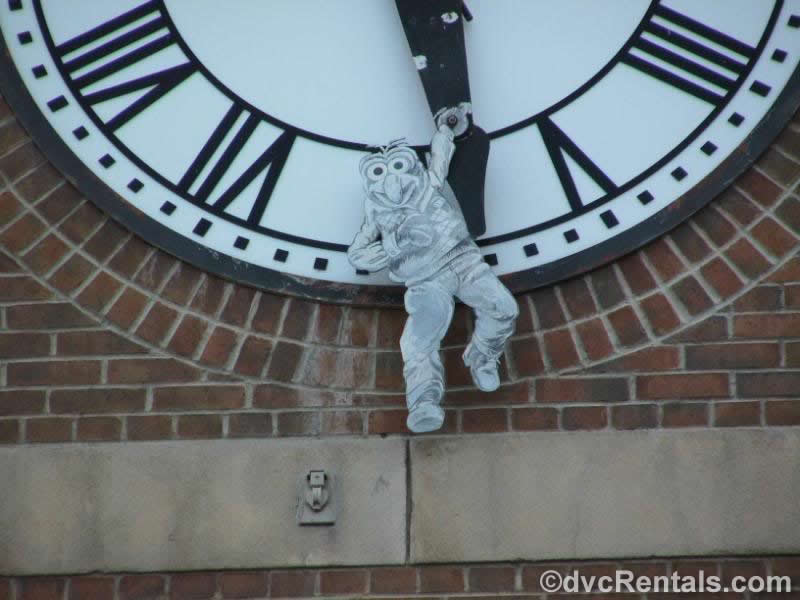 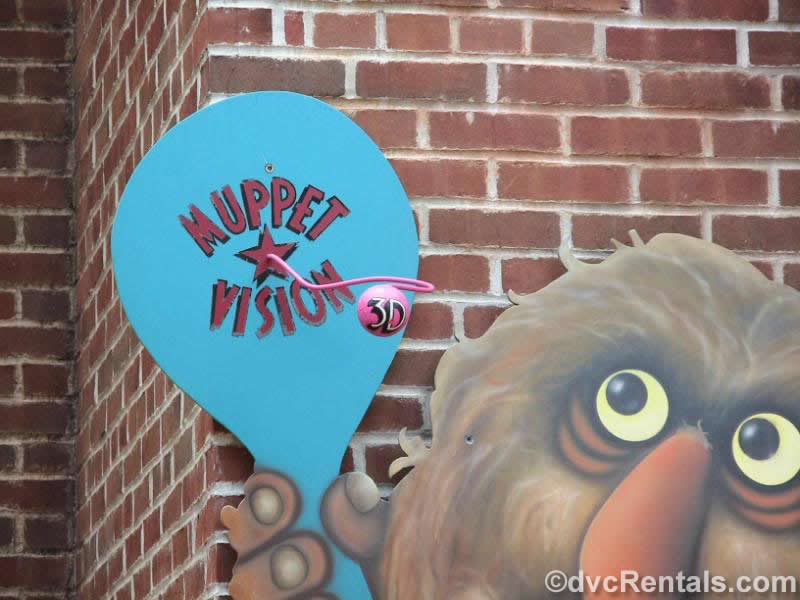 The bells hanging on the first building on the left in Japan at Epcot have hidden Mickeys on them. 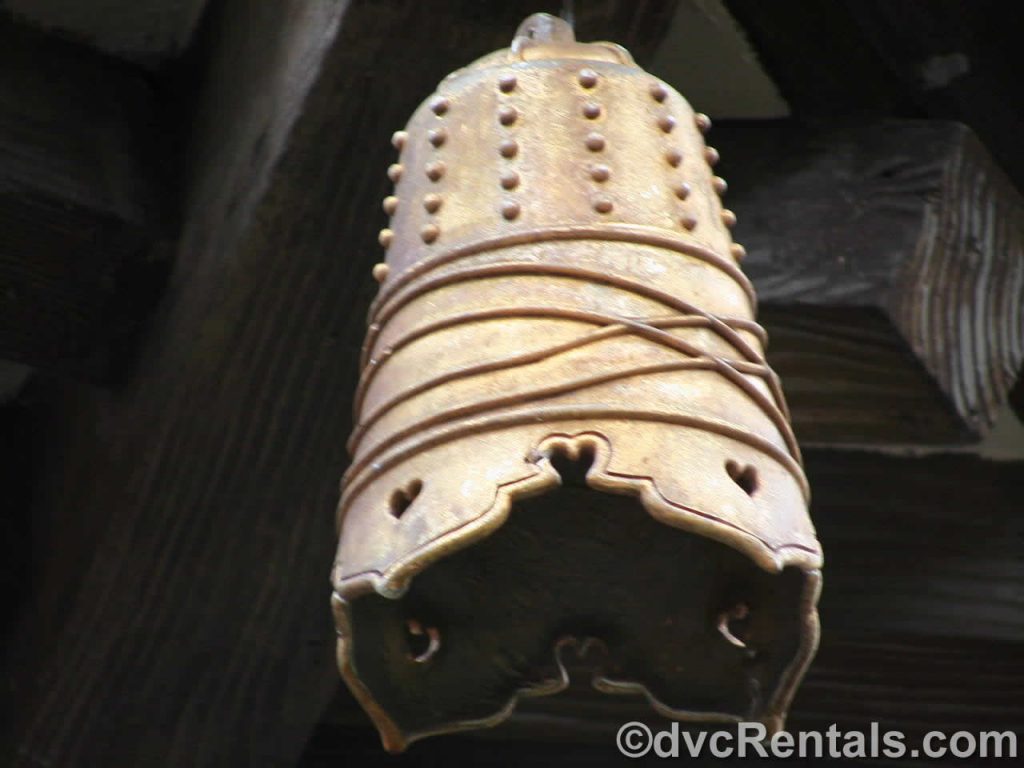 If you make it a point to remember to look up, you’ll find many more artifacts and designs all around Walt Disney World. Disney’s attention to detail is one of the things that make their parks stand out. Try to keep in mind that you will often spot surprises up above, and keep an eye out for them as you tour the various Disney Parks.  Have fun hunting for things you’ve never noticed before; it adds a whole new dimension to your Disney visit! 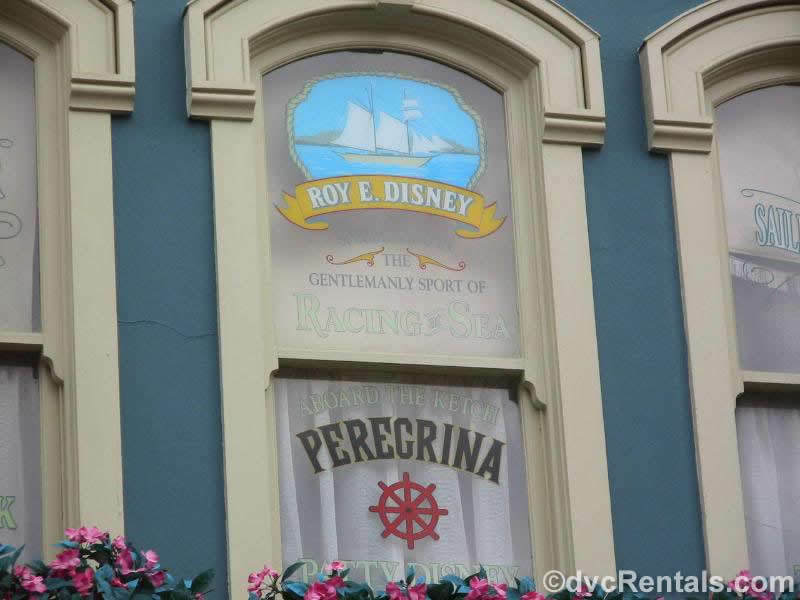