IllumiNations: Reflections of Earth is Epcot’s insightful and breathtaking nighttime show, where fireworks, pyrotechnics, water fountains, lasers, and flames have come together in a glorious production that has brightened the skies above Epcot’s World Showcase Lagoon since 1999. 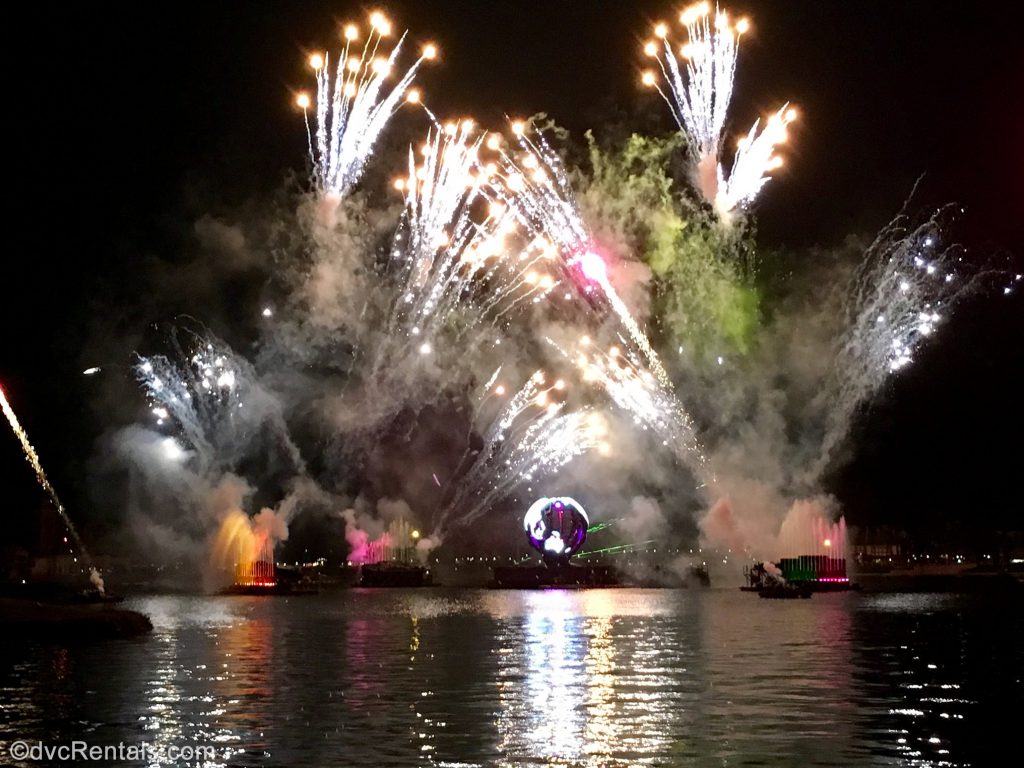 After a 20-year run, the show is now getting ready for its final curtain call and will take its final bow in September 2019. Many guests are eager to enjoy Epcot’s sensational nighttime experience one last time, and I thought this would be the perfect time for us to virtually gather together around World Showcase Lagoon to bid a fond farewell to IllumiNations: Reflections of Earth! 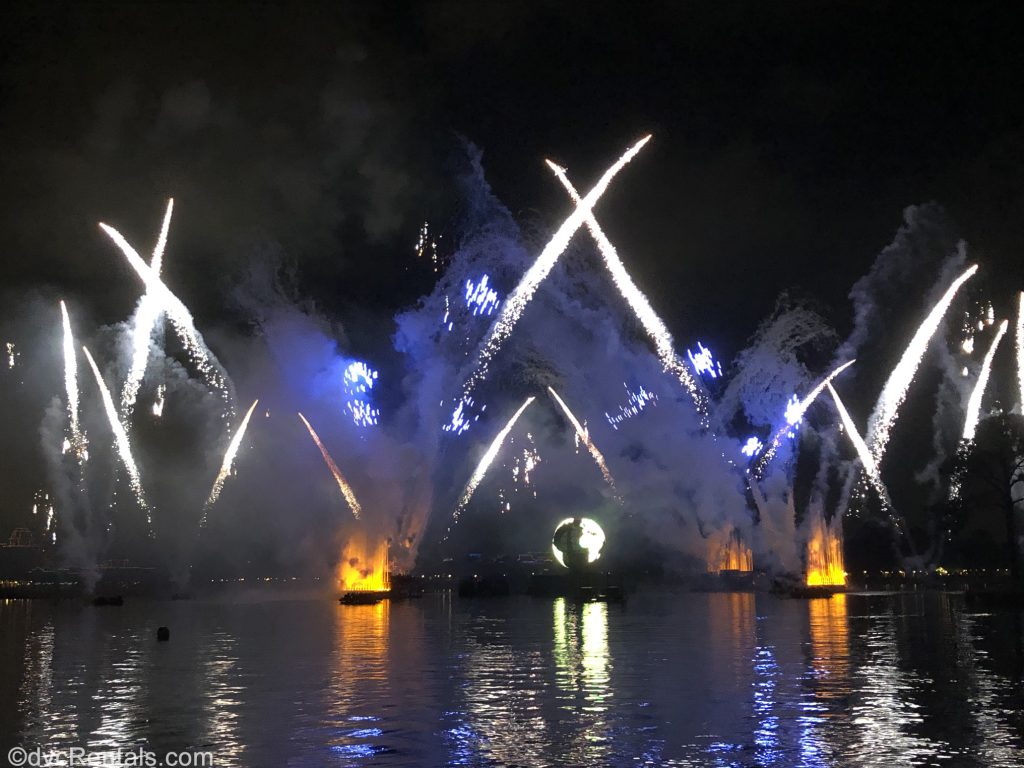 As the torches are lit around Epcot’s World Showcase, you can’t help but notice a beautiful glow taking over, as the soft flickering light washes over the country pavilions around the Lagoon. There is a spark of energy in the air, and anticipation builds as you begin to spot groups of visitors taking their places at their selected viewing areas. Personally, I like to stop by a favorite World Showcase country kiosk and get a special snack and/or beverage to enjoy! Now it’s time to find the perfect spot for the night’s presentation, and enjoy the beautiful atmosphere of the park until the skies darken fully and the show begins! 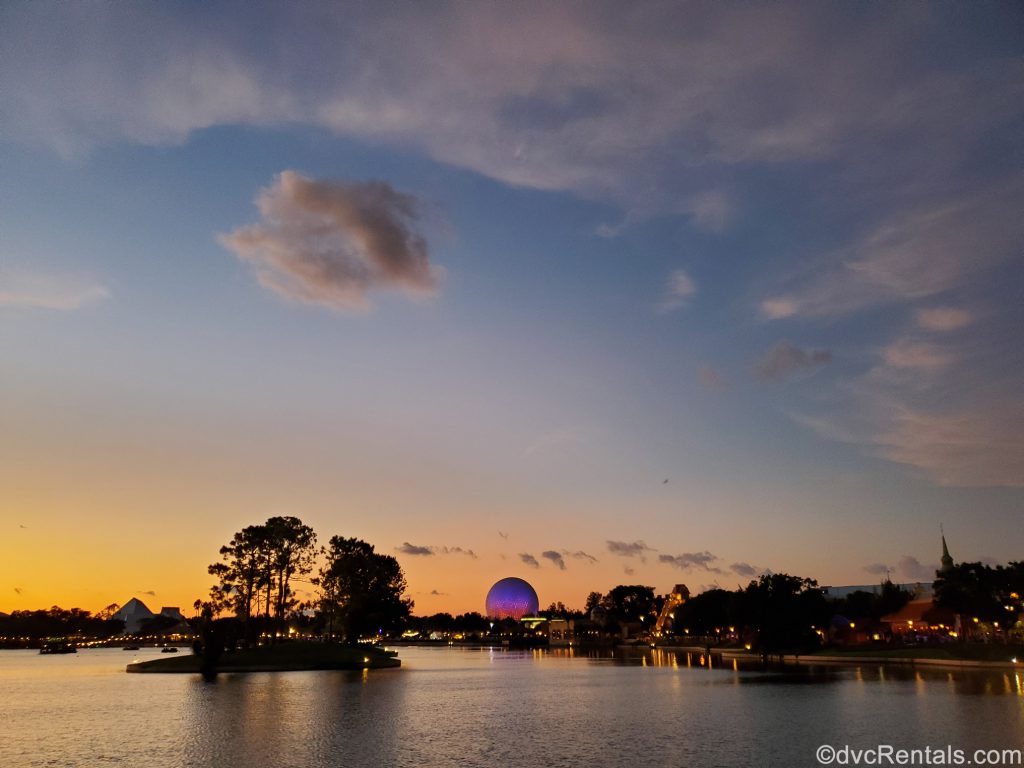 As IllumiNations begins guests are welcomed around the fire, as so many people across the world have done for thousands of years, to “share the light, and to share a story.” For me, this is where the goosebumps begin! 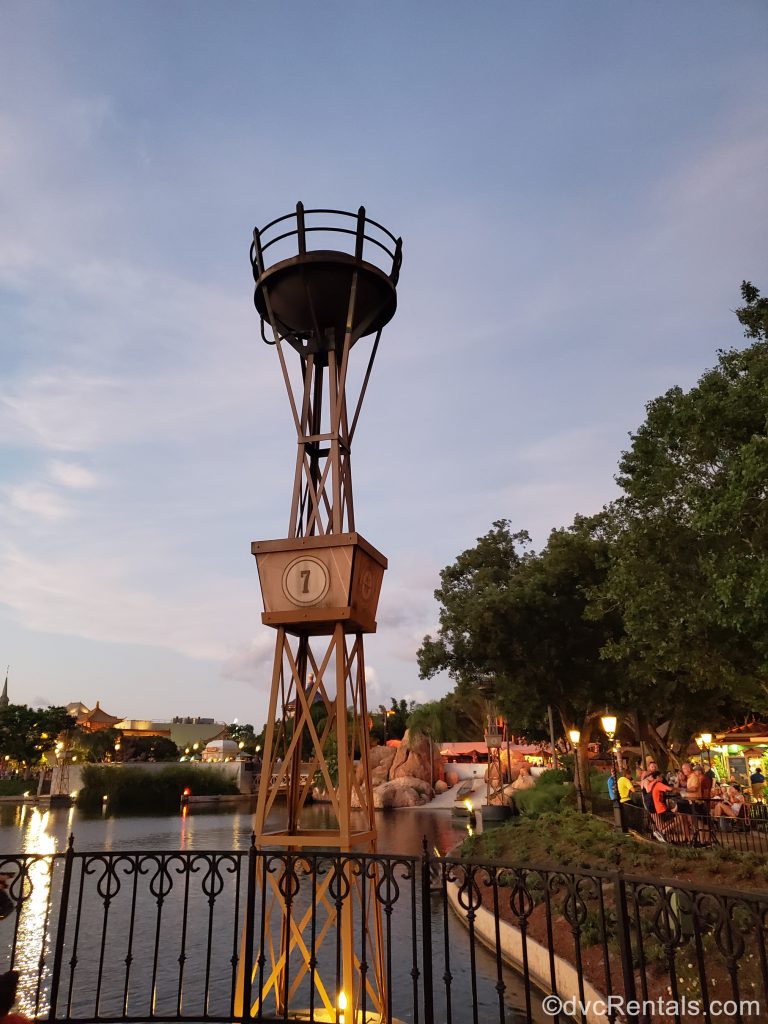 IllumiNations: Reflections of Earth is all about the history of the world, and the people who have populated it through the course of history. The thundering drums and musical score perfectly set the tone for feelings of inspiration and motivation, as flashes of yellow, red, and orange signify the beginnings of our world. The fireworks that pop in the sky represent the sparks of innovation that have pushed humanity to keep moving forward. The show’s special effects work together wonderfully as a magical form of storytelling to celebrate many of mankind’s advancements and achievements! 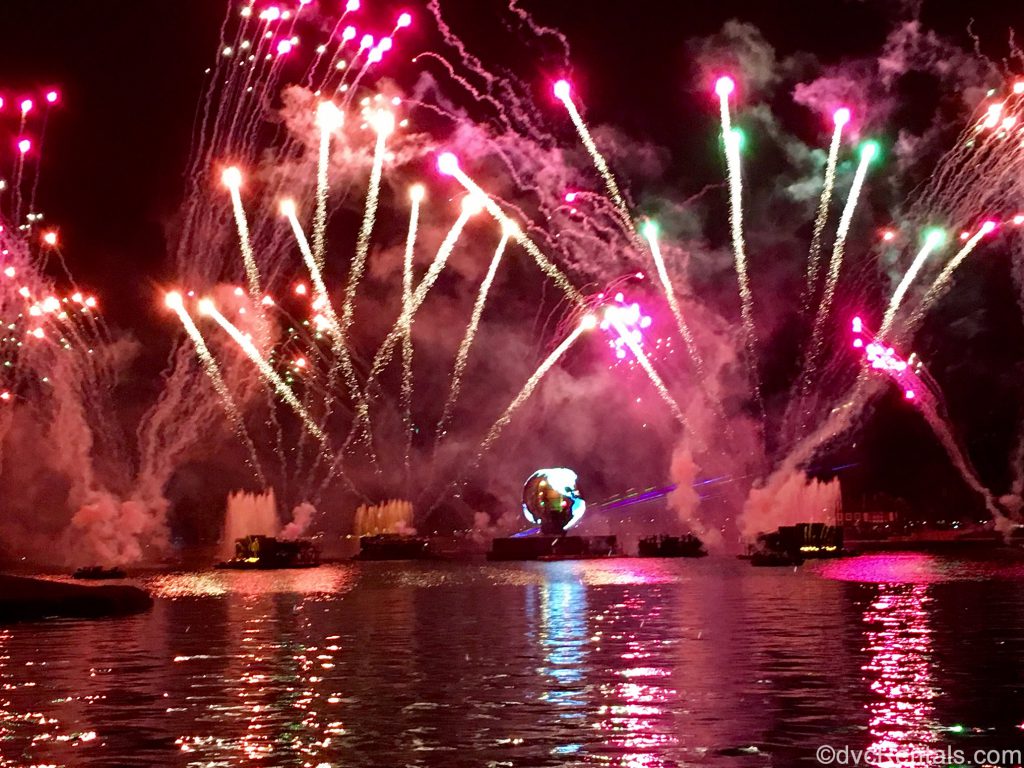 As the Earth Globe makes its way to the center of World Showcase Lagoon, the music, lights, and lasers symbolize our exploration of the world and all of the amazing places and treasures it holds. Shades of blue and green dance across the Lagoon and Globe as we embark on our journey of exploration. 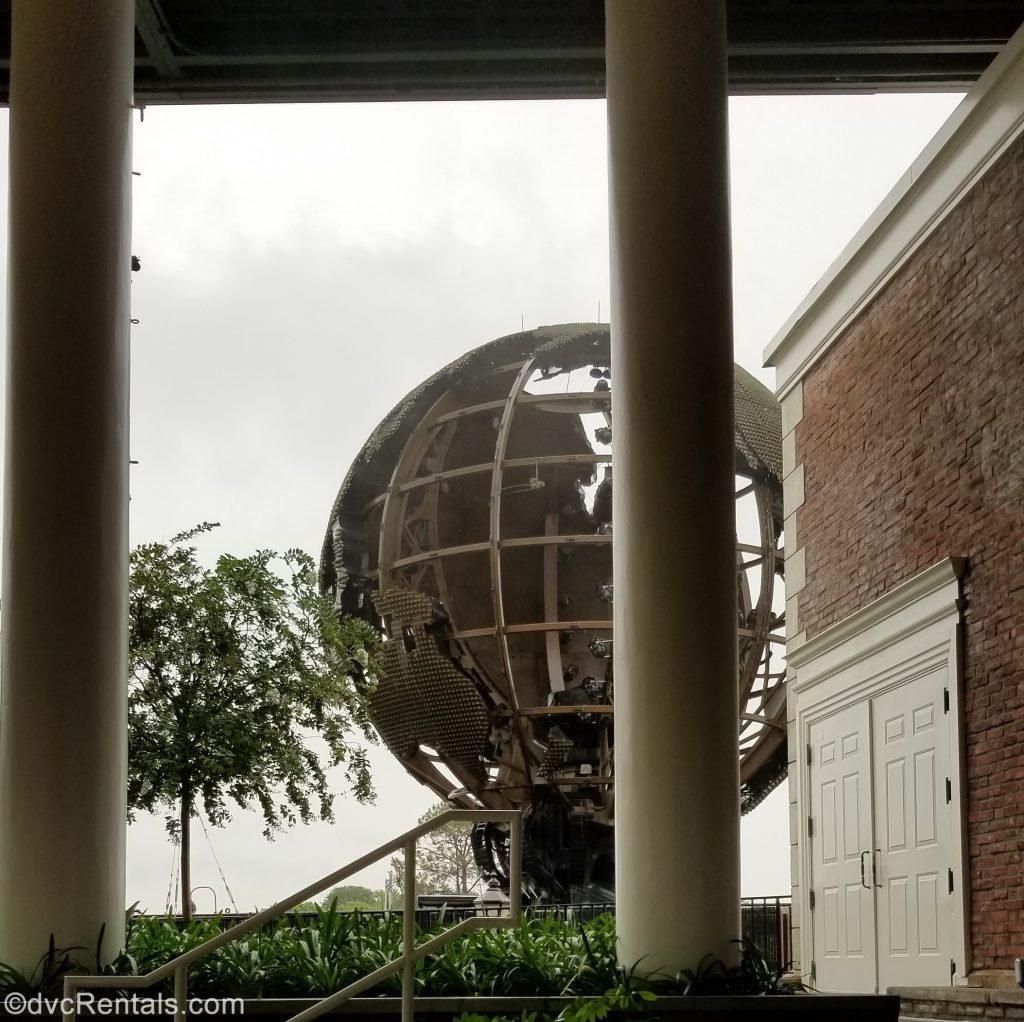 The Earth Globe used in IllumiNations is definitely the centerpiece of the show. Anchored in the center of World Showcase Lagoon, the 28-foot Globe is actually a spherical video display system!  The Globe displays a beautiful assortment of images and video footage from a variety of cultures and countries, helping to solidify the message of the song featured in the show – that “we go on” together as a unified human race. 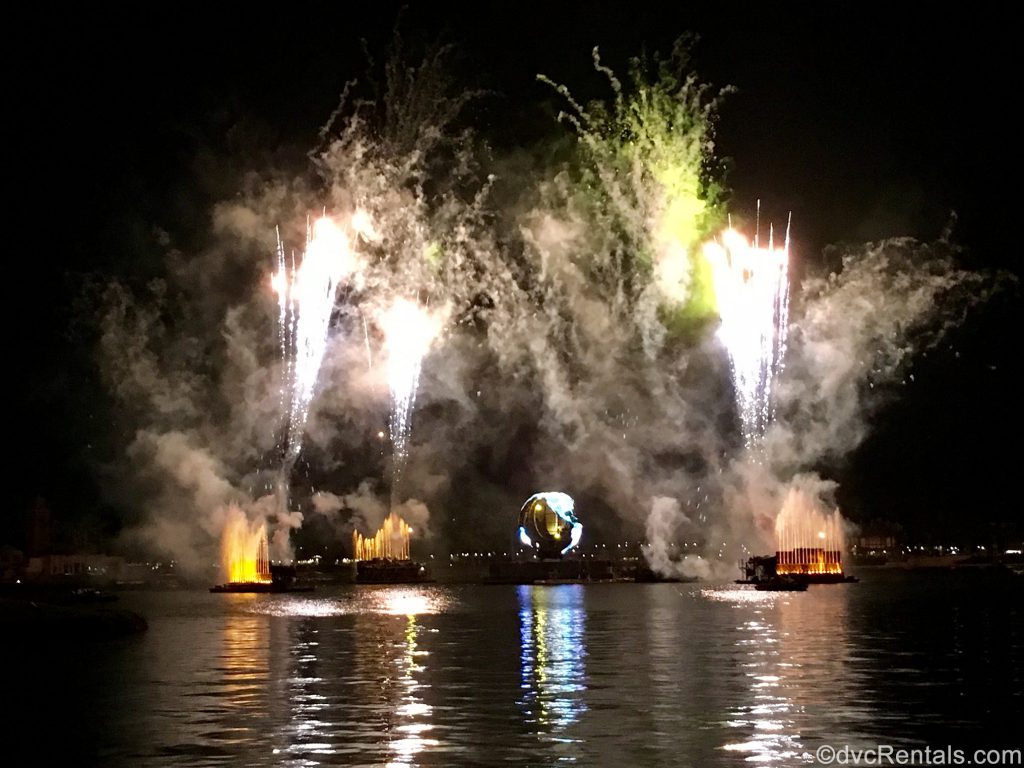 As the show goes on, the musical score takes an uplifting tone as the fountains in World Showcase Lagoon bring the waters around the Globe to life. Lasers and lights spring forth from the various country pavilions marking the glory of achievements and innovations from cultures around the world. A crescendo of fireworks leap into the sky, celebrating the beauty of mankind’s successes and leaving a shimmering glow over the water below. 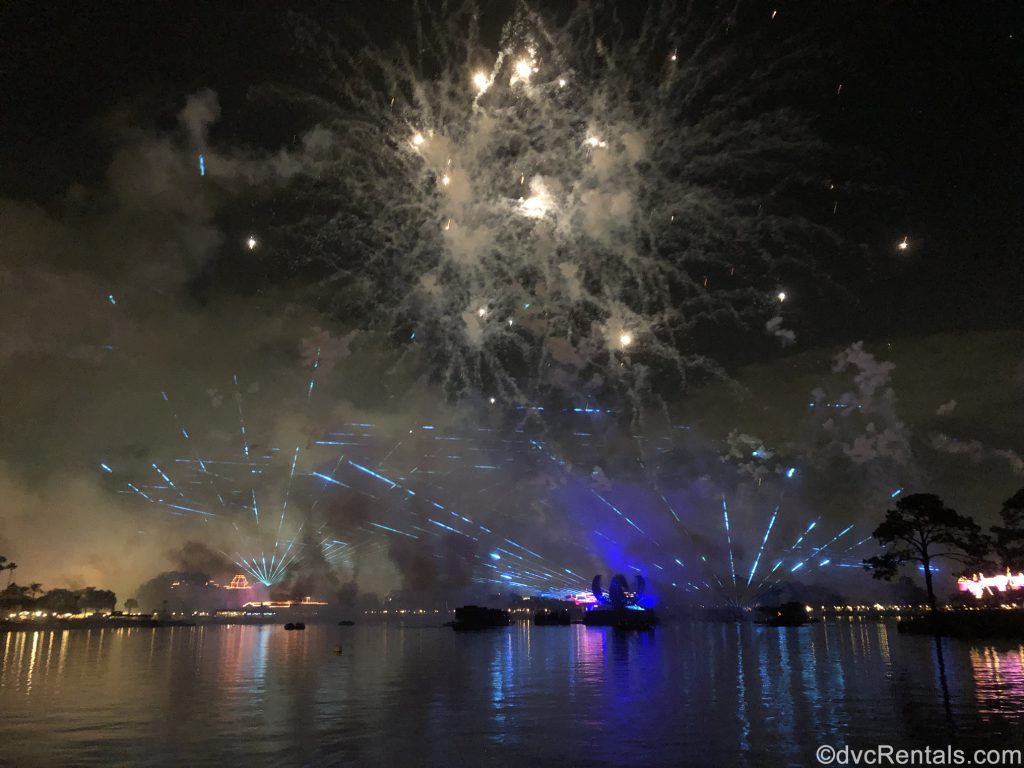 As the music soars, the Earth Globe opens to reveal a core of flames at its center, symbolizing the drive and energy behind the human race. “We go on” because we all want to make an impact on the world, and celebrate the advancements made by our fellow man!

The finale of the show doesn’t disappoint! A bright spectacle of shining pyrotechnics dazzles the crowds who have gathered around the fire together for the magical and inspiring story of the world around us, and the possibilities of the future that lies ahead. With a final flash of pyrotechnics and plenty of cheers from fellow park guests, the show ends for the evening. 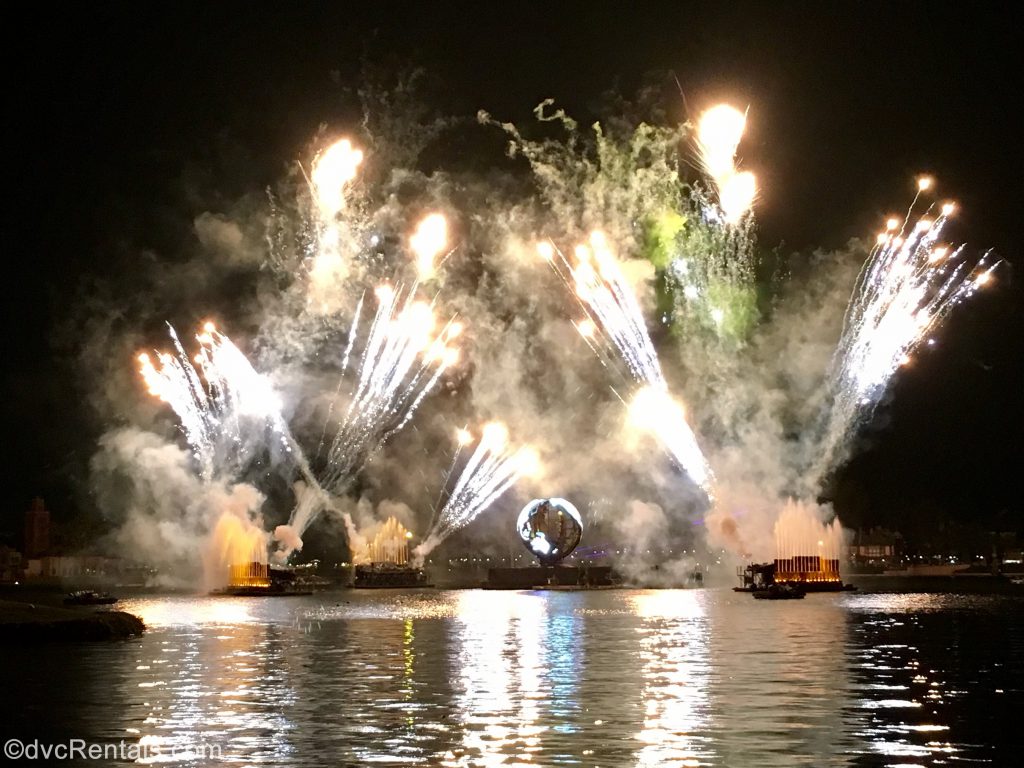 Not only does IllumiNations provide a plethora of breathtaking visuals, it also brings an impactful message to the guests who are enjoying the show. The imagery, score, song, and narration come together to tell a remarkable story and remind us all of the power humanity has when cultures and nations come together to make a positive change for people across the world. 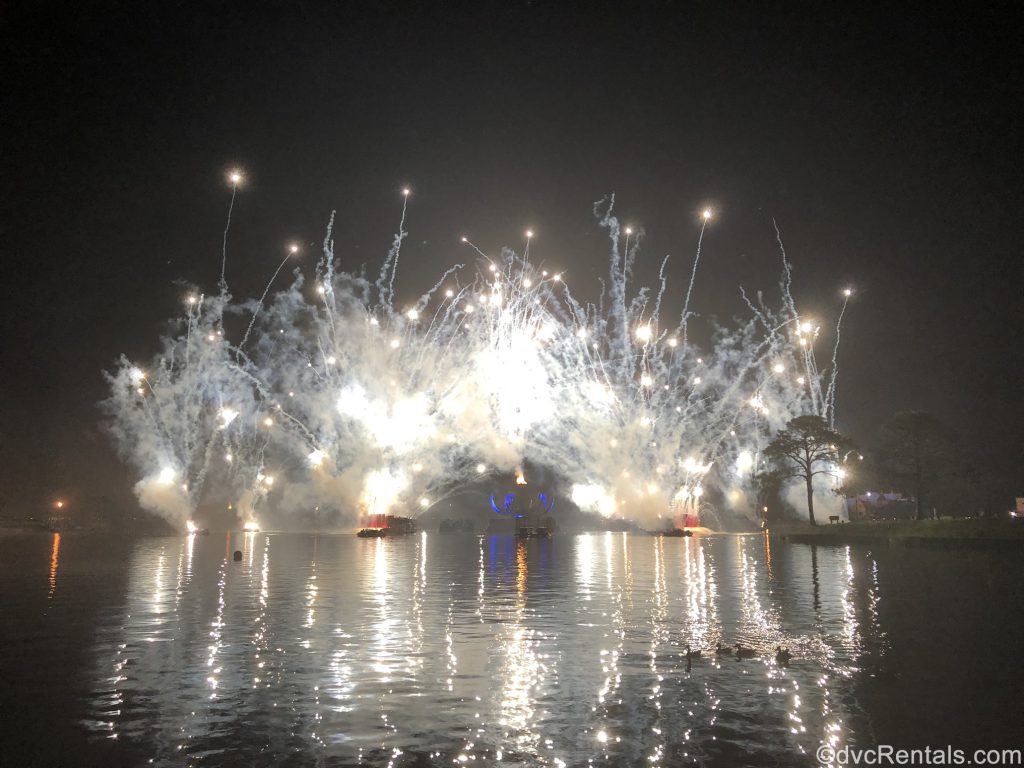 To me, IllumiNations truly captures the spirit of what Epcot is all about. The show is indeed a reflection of Earth! It tells the stories of our earliest beginnings, our greatest achievements, and the hopes we have for our collective future. IllumiNations weaves together the elements of technology and humanity to tell a tale that affects each and every one of us, all with a touch of Disney magic! 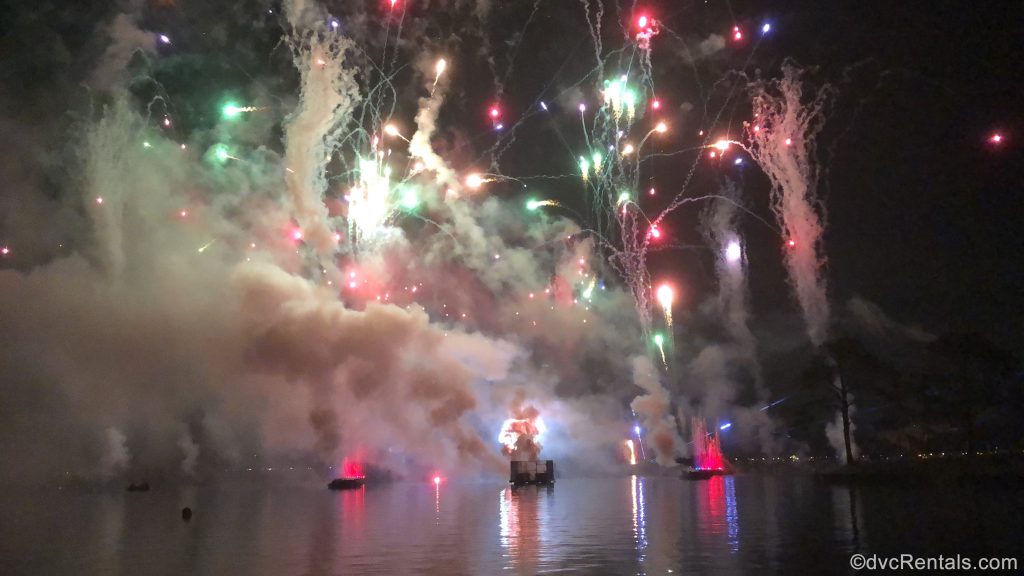 For guests who want to add an extra touch of magic to their viewing of IllumiNations, there is the Frozen Ever After Dessert Party at Epcot’s World Showcase. Those who have purchased reservations for the Dessert Party are able to enjoy a variety of sweet and savory snacks and beverages, as well as prime water-side viewing for IllumiNations. After the show, party-goers are then escorted to the Norway Pavilion for the chance to ride the hugely popular Frozen Ever After boat ride! It’s a very magical way to cap off a day in the park!

Special occasions such as park anniversaries, and holidays like Christmas, New Year’s Eve, and the Fourth of July have also been celebrated with versions of IllumiNations over the years! Additional effects, music, and narration have been added from time to time through the course of the show’s 20-year run to correspond with each event. I had the chance to see a few of the different varieties during my visits, and I must say they have all been very magical! 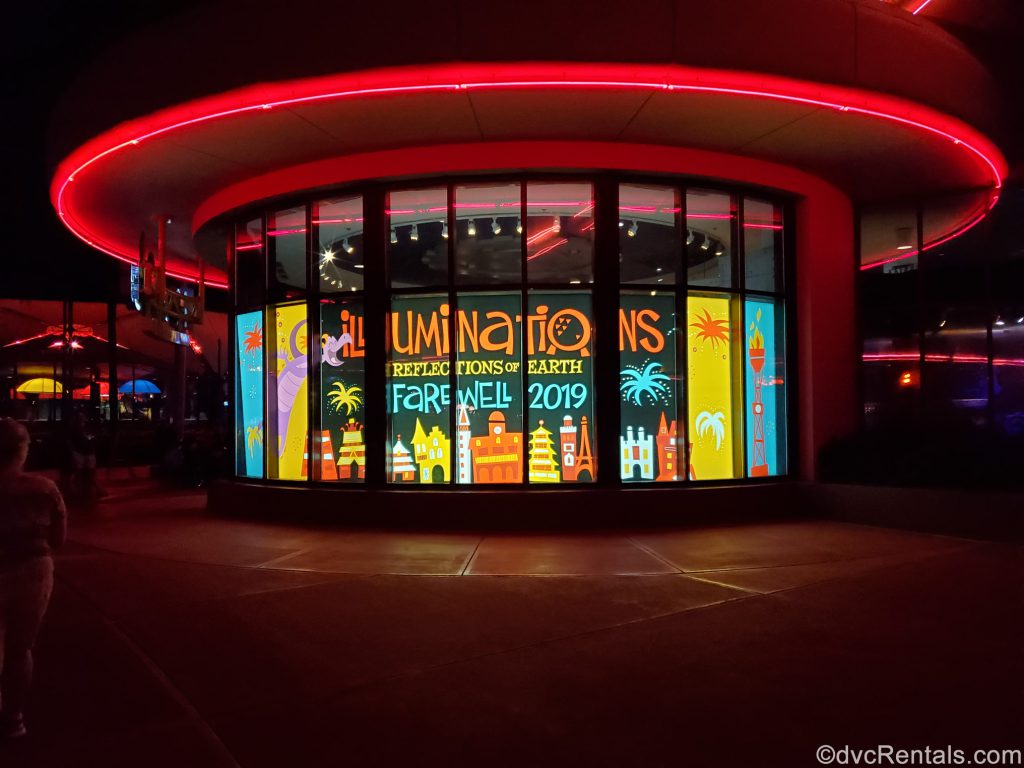 As the final showings approach, I look forward to what will come next for Epcot’s nighttime entertainment! A new show called “Epcot Forever” has been announced, and is expected to debut on October 1, 2019.  Disney has announced it will have a limited run as they continue developing a more permanent nighttime show. Epcot Forever will still feature fireworks, music, and lasers, as well as new special effects, and will tell the story of Epcot’s past, present, and imagined future.

IllumiNations may soon become part of Epcot’s past; however, it leaves an impressive legacy! The show has been a beloved part of Disney plans for park-goers over the years and will be a treasured part of Disney Park history. Along with the memories of the beautiful sights and sounds, I hope that the message will continue to live on in the hearts and minds of Disney fans around the world! 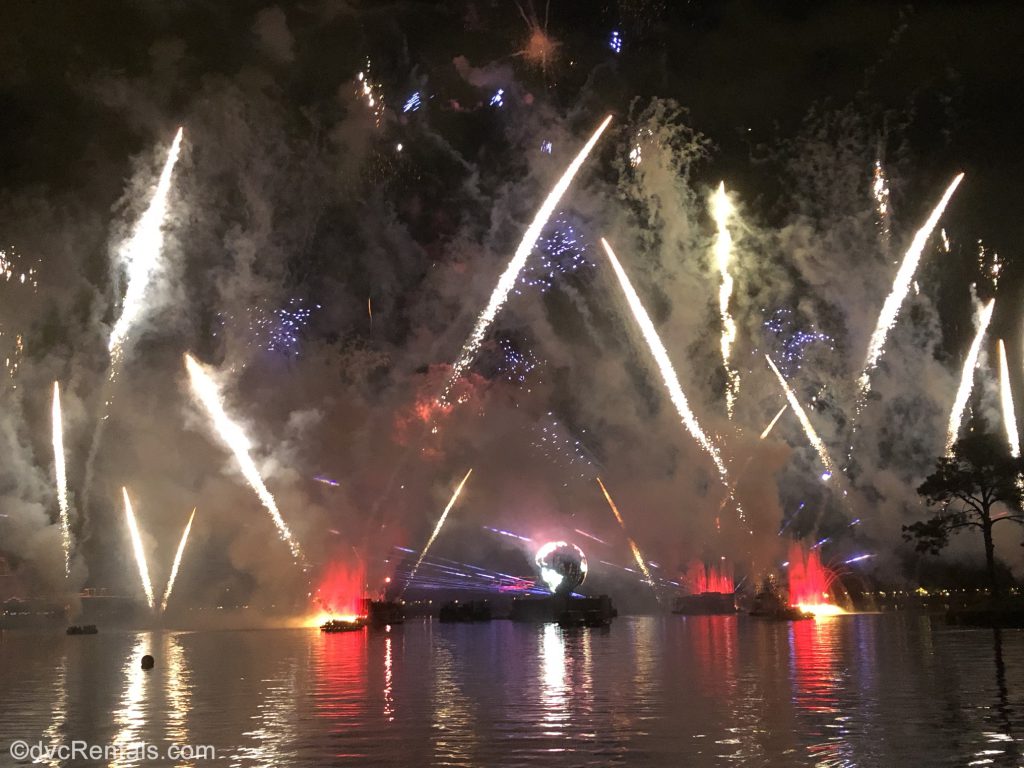