As most Disney fans know, Walt Disney World turned 50 on October 1, 2021. Many special items related to the 50th anniversary can be found in all of the parks. Merchandise is plentiful, special signs abound, and anniversary-themed goodies to eat are available in many places.

Yet, not all of the special items are obvious. Known as the “Fab 50 Character Collection”, there are 50 beautifully made gold statues of Disney characters spread throughout the four major parks at Disney World. 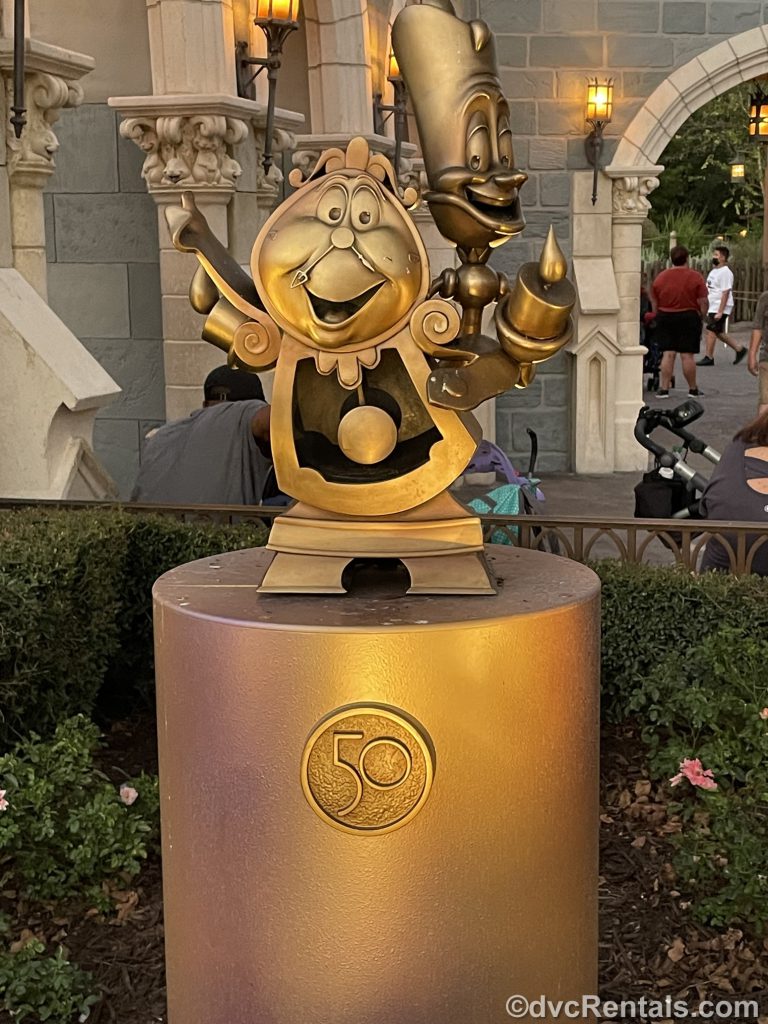 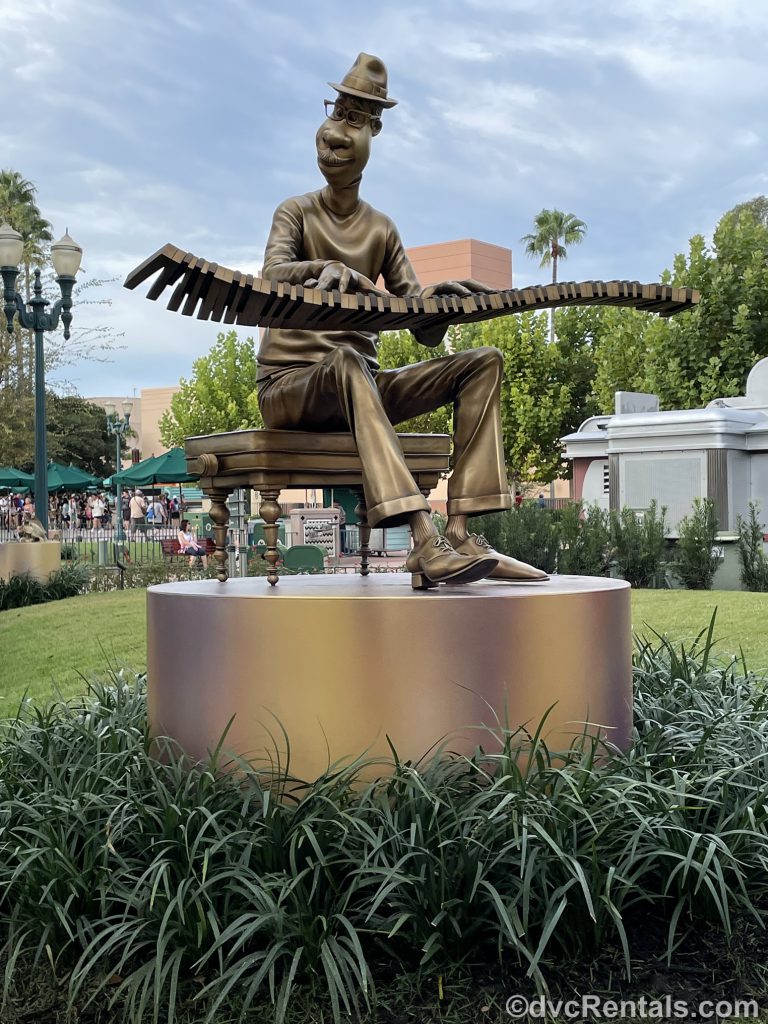 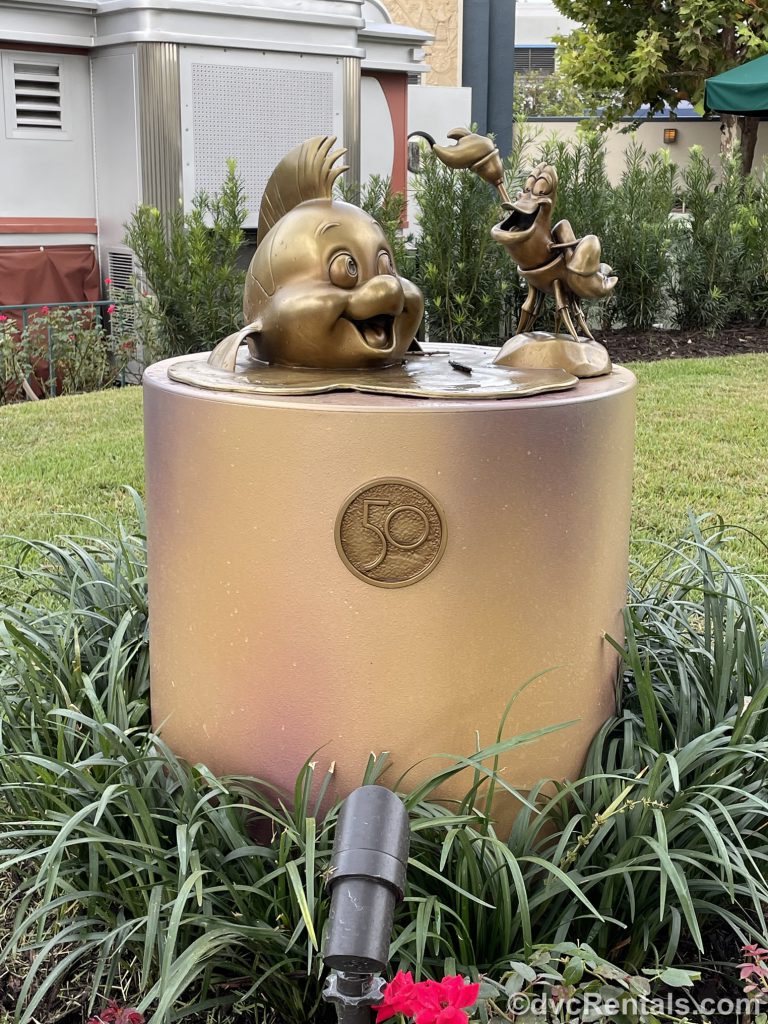 While some ARE obvious, a number are hidden and much harder to find. Many of the statues are perched on a pedestal that is painted with the 50th anniversary EARidescent paint and has a round “50th” emblem on the pedestal. Those are the easiest to locate. But some are in out-of-the-way areas with no pedestal; those are way more challenging to locate. 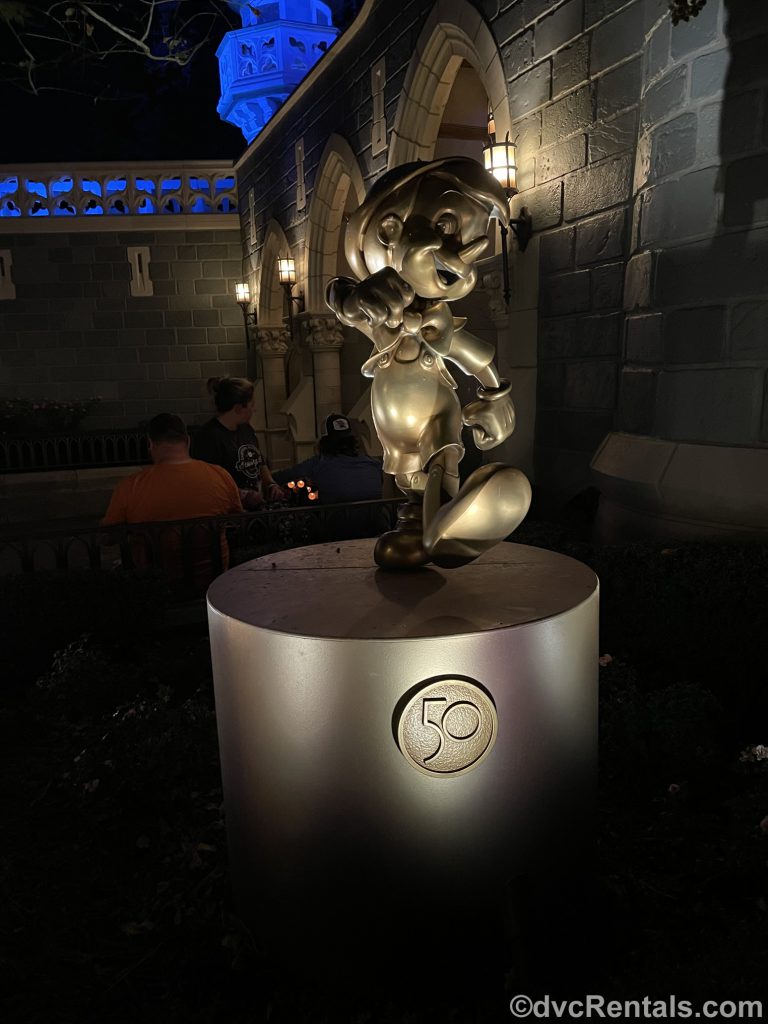 I’ll post a few pics of the gold statues with this blog, but I don’t want to spoil the fun for guests who’d rather find them on their own. (If you’re not planning a trip to Walt Disney World, or you don’t want to take the time to search, there are plenty of web pages that will tell you exactly where to find the statue, most with pics). For those who enjoy the “thrill of the hunt,” it’s exciting to find statues you hadn’t spotted before, especially when they are in a unique area. I will say that the Magic Kingdom has the most statues of all four parks, most likely because it’s the original (and only) park that was available to guests on opening day in 1971. However, Liberty Square and Frontierland are devoid of statues, so do your hunting at the other lands in the Magic Kingdom. 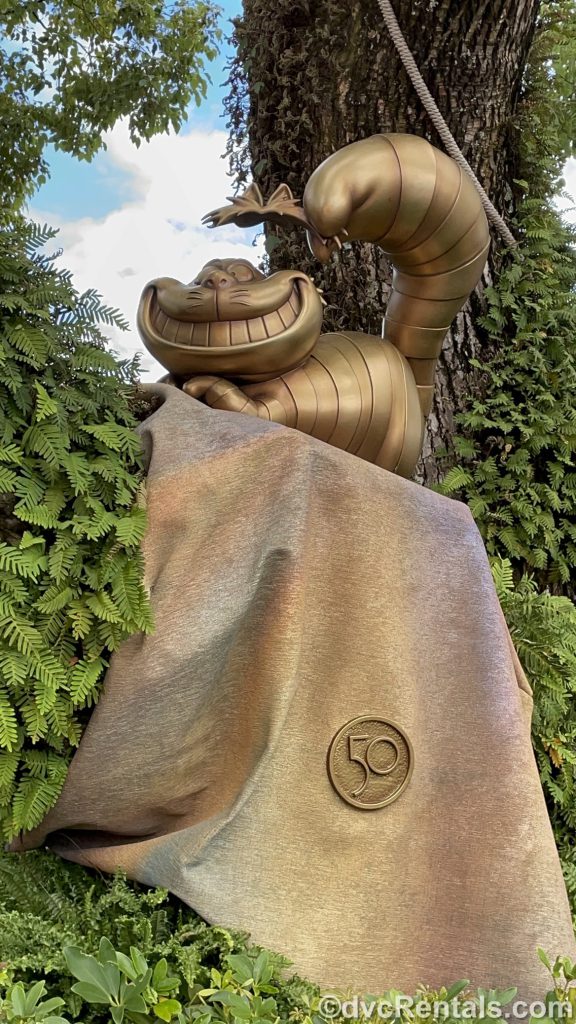 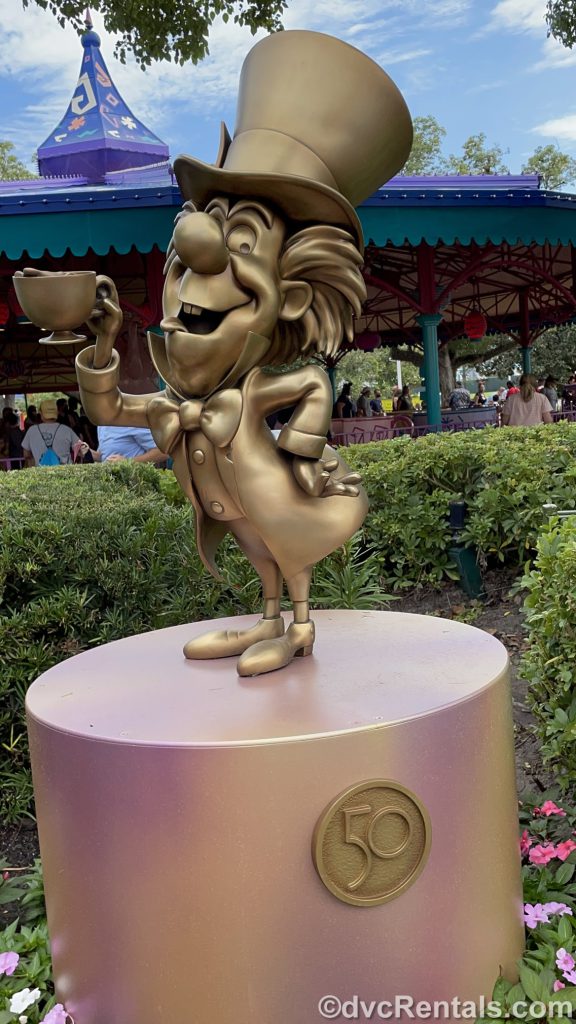 Animal Kingdom has the smallest number of gold statues. 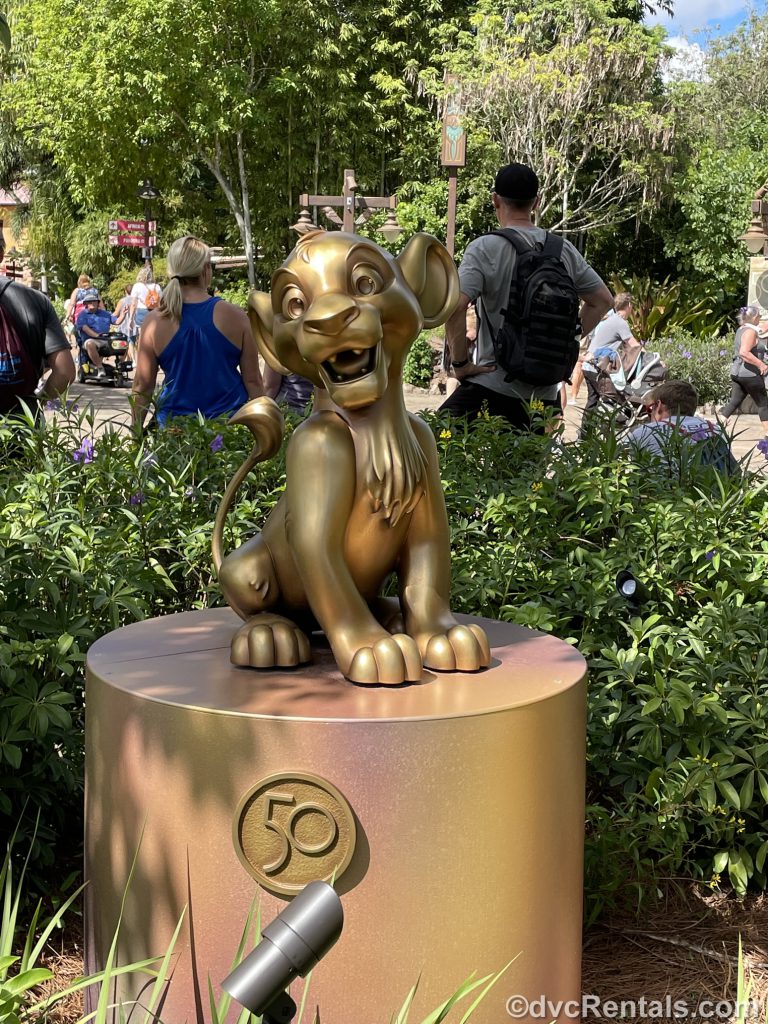 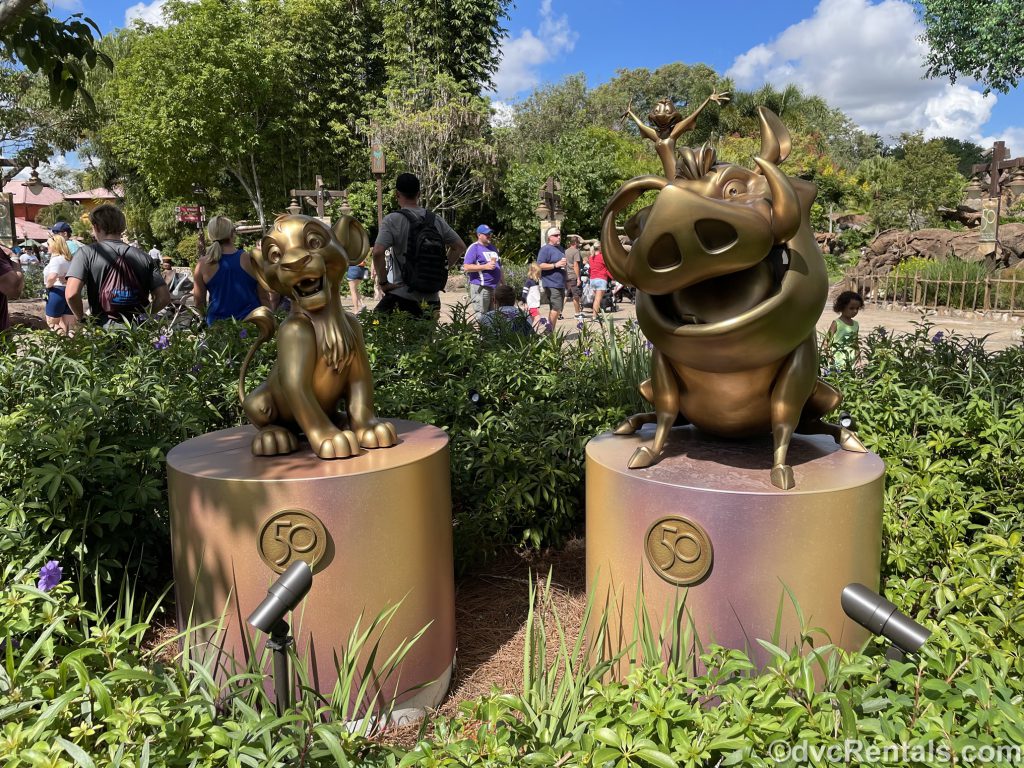 A few of the statues eagle-eyed guests will spot are Cheshire Cat, Tinkerbell, Woody with Bo Peep, Dory with Nemo, Stitch, Pinocchio, Chip N Dale, Lady with Tramp, R2-D2—and of course Mickey, Minnie, Donald, Pluto, and Daisy! Some gold statues have solo characters; others have more than one together. There are a total of 36 statues. But if you add up all the Disney figures on the statues, it comes to 50 in total, one for each year Walt Disney World has been open. 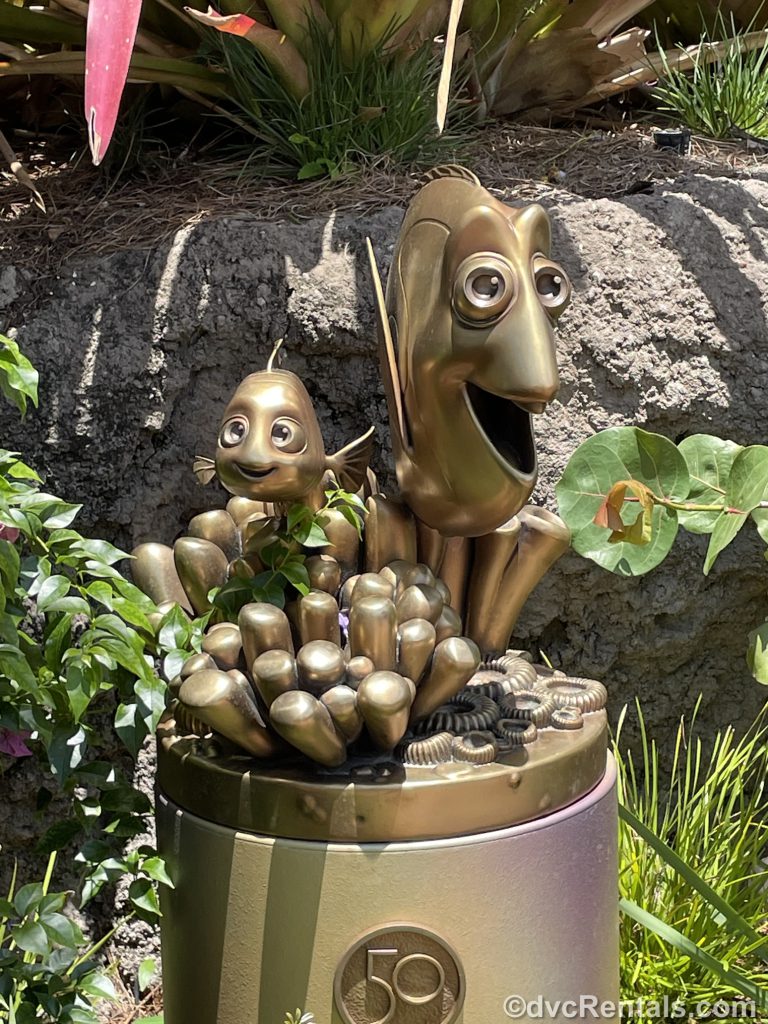 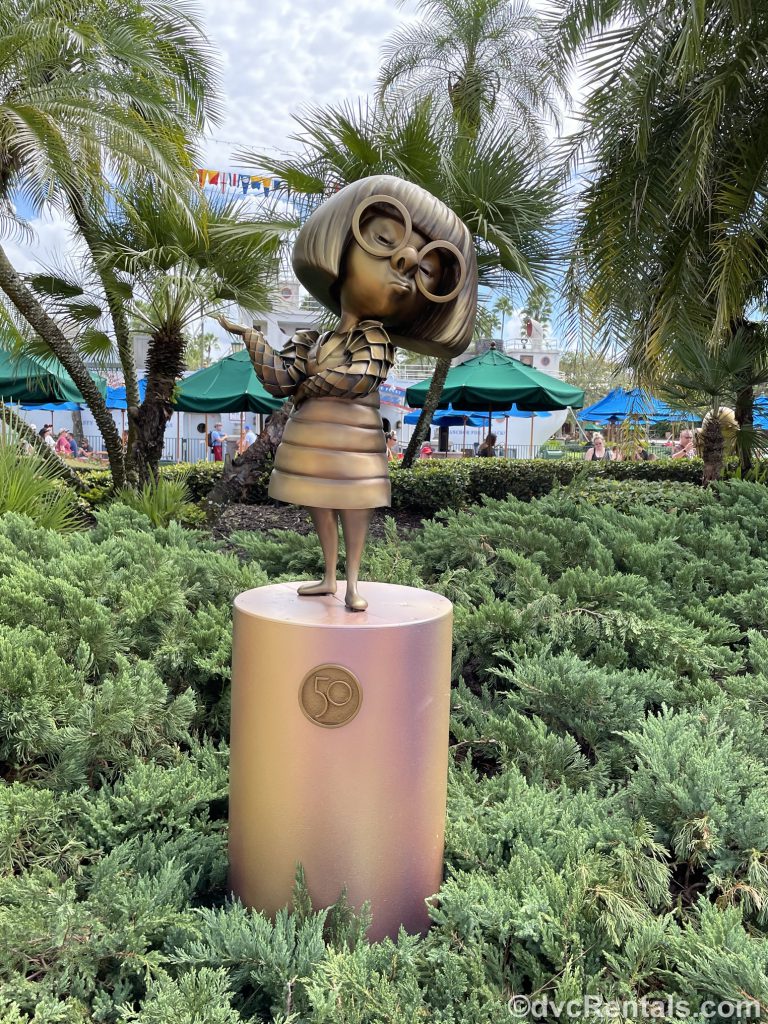 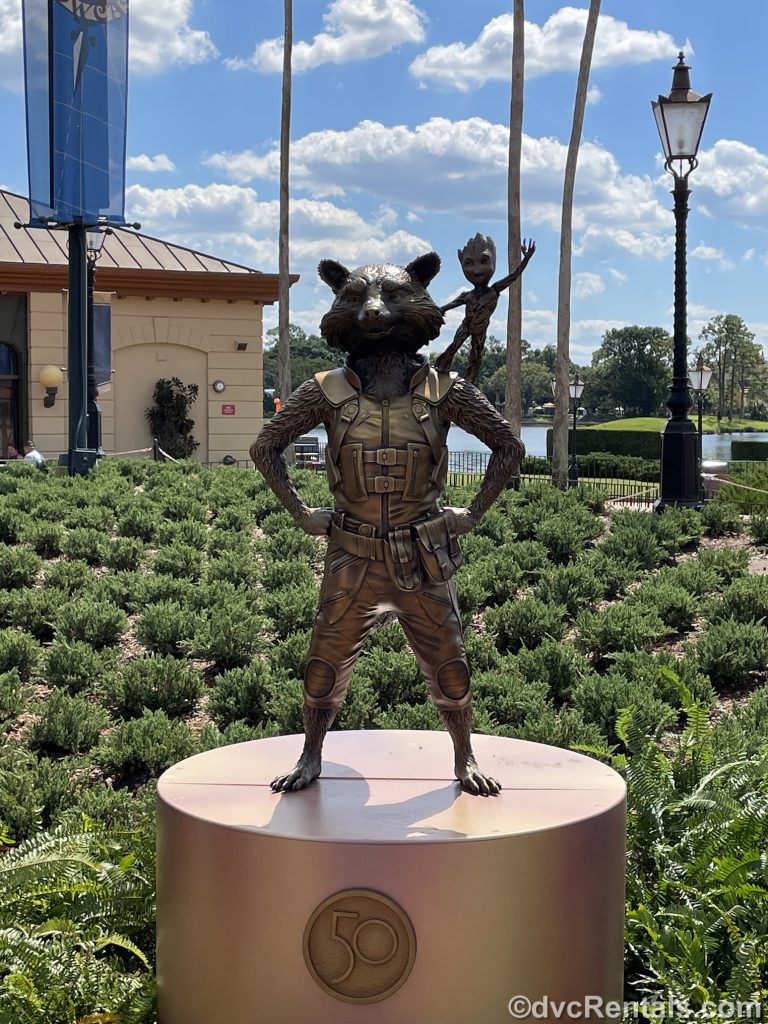 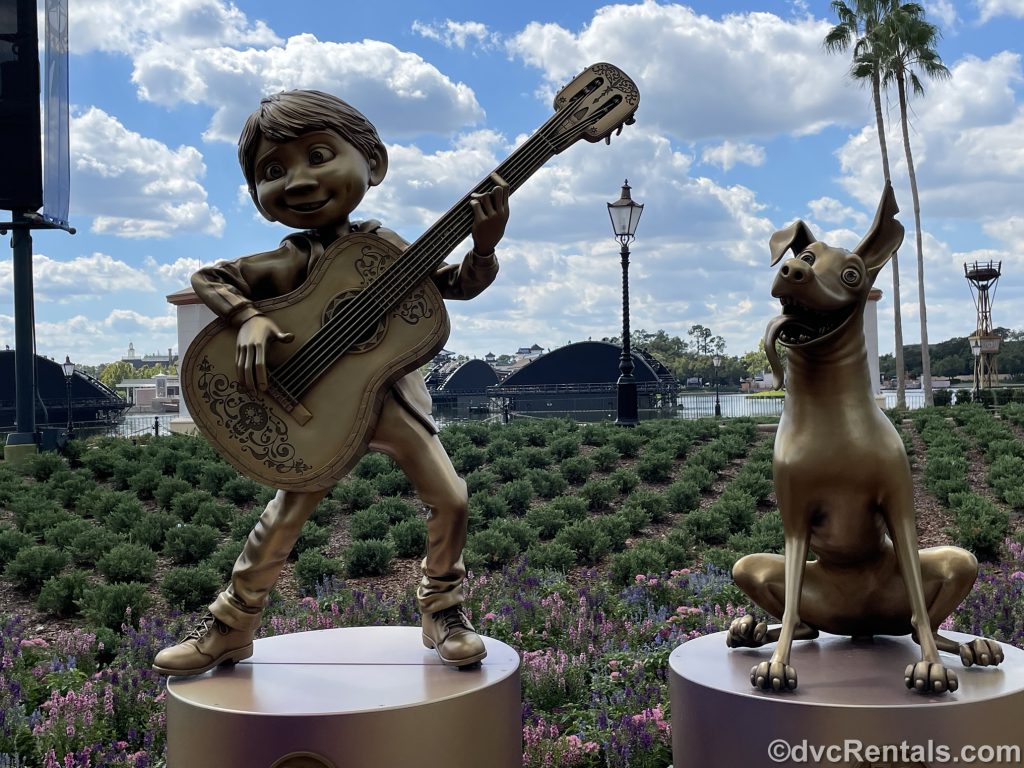 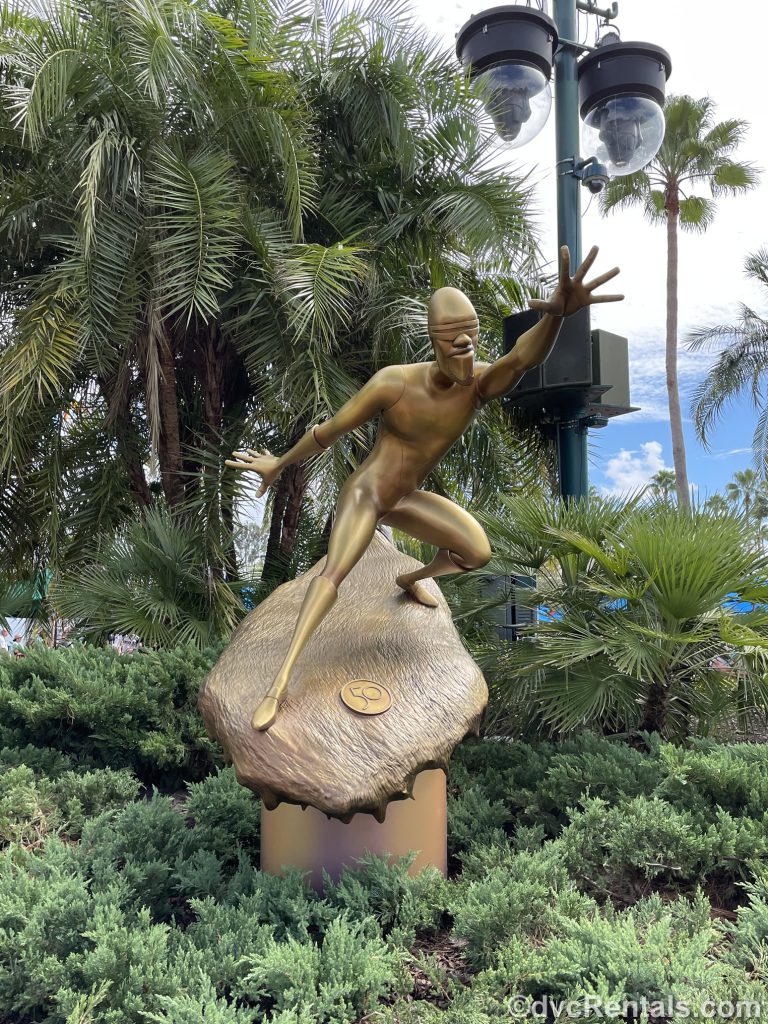 For guests who want to take a replica of a statue home or those who won’t be going to Disney World any time soon, there are a number of smaller 50th Anniversary statues available to buy, both at the parks and online at Shop Disney. I noticed the majority at Disney World at Bonjour Village Gifts in Magic Kingdom, the shop near Gaston’s Tavern in Fantasyland. Not all are available to buy, yet here’s one sample; https://www.shopdisney.com/woody-golden-statue-toy-story-walt-disney-world-50th-anniversary-465057015122.html?isProductSearch=0&plpPosition=22&guestFacing=Parks-Shop%2520By%2520Destination-Walt%2520Disney%2520World-Walt%2520Disney%2520World%2520Home. The cost is $99.

Unfortunately, out of stock at the moment, there were some cute statue replicas available for only 9.99. They are tiny but very cute. I will include the link in hopes they will be sold again soon:

By the way, when you find them, be sure to read the inscription on the Minnie & Mickey statues. “Walt Disney Cast Members have always been the heart of our magic. These statues of Mickey Mouse & Minnie Mouse are dedicated to the Cast Members of the past, present, and future. Thank you for making Walt Disney’s dream a reality. Dedicated this 15th day of September 2021.”

At this time, nothing has been officially announced regarding what will happen to the statues once the 50th anniversary celebration ends in March 2023. My hope is they remain in place, each one I saw was in a location that made sense, and they are all so well done. It’s happened before with other celebrations. For example, the Sorcerer’s Hat at Hollywood Studios was erected in 2001 and was said to be for the 100 Years of Magic celebration. Yet that hat stayed there until 2015, so hopefully, the statues will remain in place for a while. Time will tell; I hope you get a chance to view them in person! 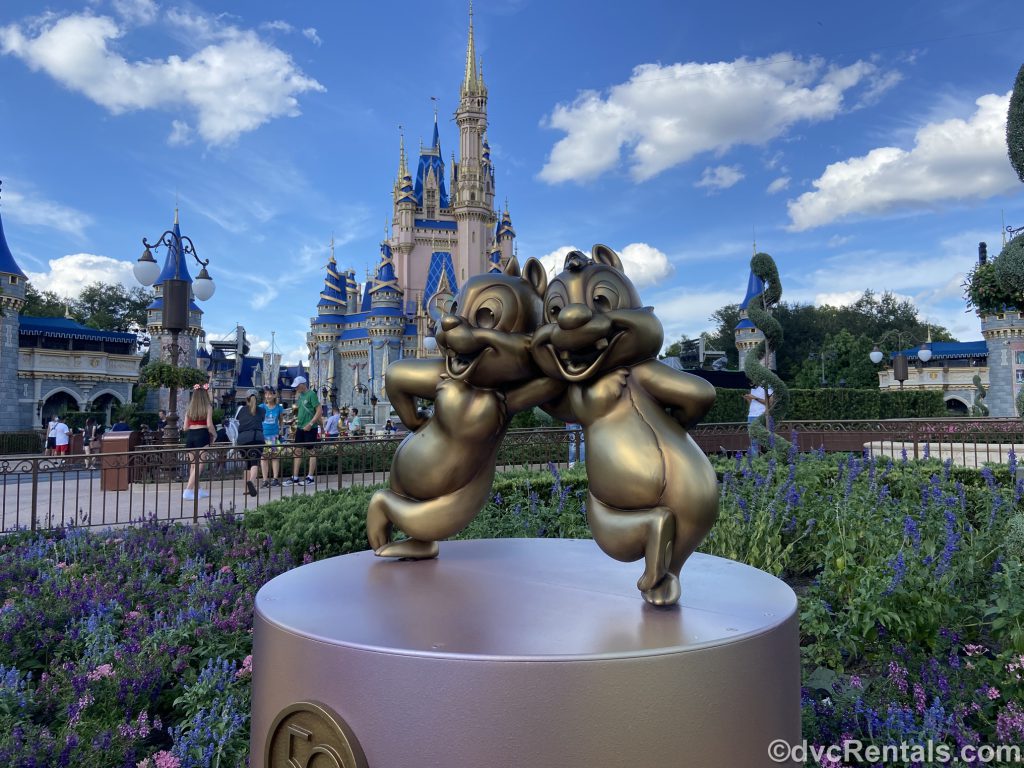