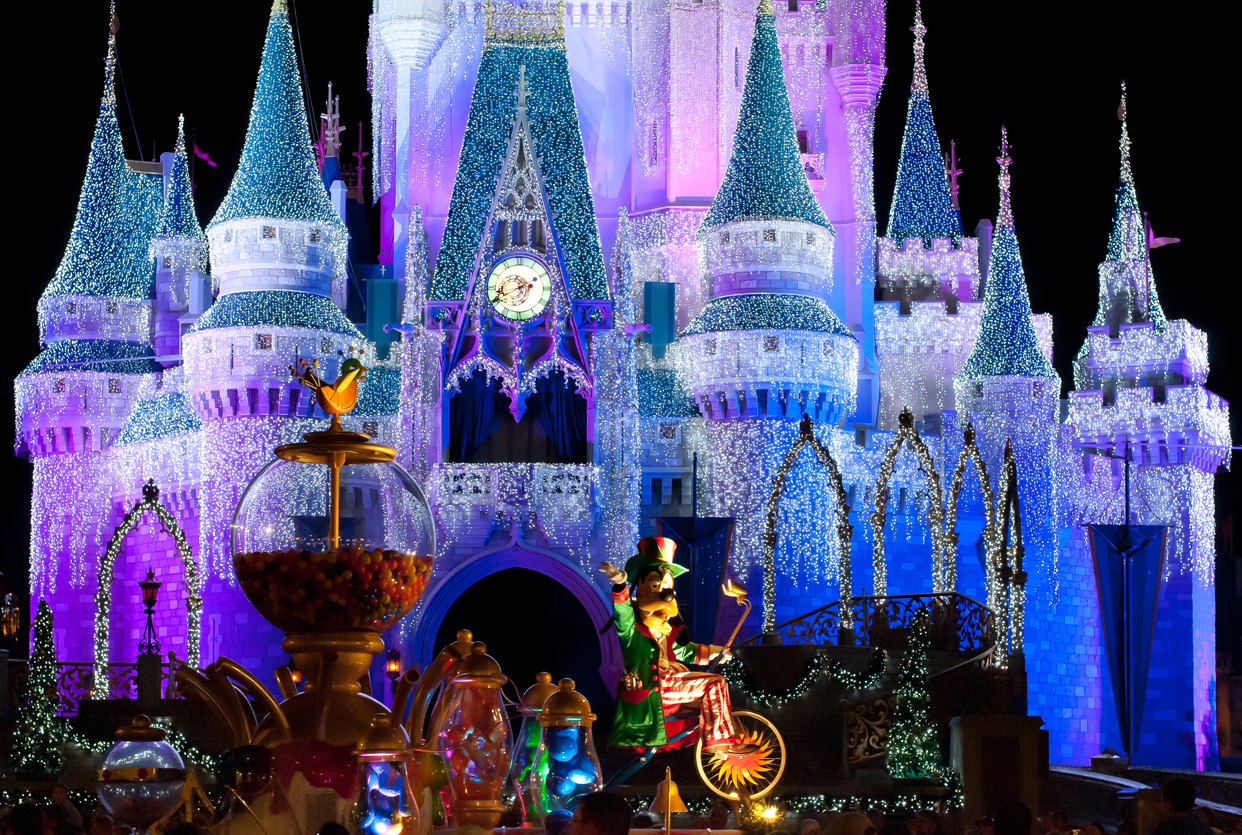 If you like the holidays, visiting Walt Disney World in December is extra special. Everywhere you go the magic of the season fills your senses. The resorts are beautifully decorated and each of the parks offer special holiday activities. Even those who think it just isn’t Christmas without snow won’t be disappointed! For those of you visiting Walt Disney World this month, here is some information for your trip.

December weather in Orlando is what I consider absolutely perfect. The temperature is quite pleasant, with highs averaging 71-75 degrees and lows in the low 50s, and no humidity to speak of. The average precipitation is just 2.6 inches.

The big thing to note as far as crowds goes this month is Christmas week. Christmas is THE busiest time of the year at Walt Disney World. Expect to see very crowded parks from December 22 all the way until after New Year’s Day. The best way to enjoy the parks is to not try to do too much – just know that you will spend a lot of time in between attractions and go with the flow. It’s a good time to absorb all the wonderful details that you often miss when it’s not as crowded. Early in the month, the crowd levels are pretty low as a rule. A good resource for knowing which park is likely to be the least crowded on a particular day is Touring Plans.

The Osborne Family Spectacle of Dancing Lights occurs nightly on the Streets of America at Disney’s Hollywood Studios all month. This amazing display features millions of glittering lights perfectly synchronized to holiday music.

Guests can get their picture taken with Santa Claus during Festival of the Seasons at Downtown Disney.

Here is a list of the closures that you may encounter in the parks when visiting in December. The AllEars website has a comprehensive listing of closures and rehabs at Walt Disney World. Rather than reinvent the wheel, I’ll direct you there for detailed information.

The grand opening of the New Fantasyland is on December 6.

The Pirates of the Caribbean: The Legend of Jack Sparrow will officially open on December 6.

The refurbished Test Track will have its grand reopening on December 6.

The former Bistro de Paris in the France pavilion will reopen December 11 as “Monsieur Paul.”

The Character Spot located in Epcot’s Future World closed on October 21 for refurbishment and is scheduled to reopen in February. Mickey, Minnie and Pluto can be seen temporarily near the Fountain View Ice Cream shop and Goofy can be found at Epcot’s main entrance, near Spaceship Earth.

Typhoon Lagoon closed on October 28 for its annual refurbishment, reopening on January 5, 2013.

That wraps up my preview for December. Watch for what to expect in January to be posted at the end of this month. I will be in Walt Disney World from December 1- December 14. Be sure to like our facebook page or follow me on instagram or twitter so that you get to see all the photos I post while I am there! On Wednesday, December 12, David, Cathy, Melissa and I are going to see Off Kilter (Canada, Epcot). Stop and say hi before the show if you’re there. We’ll arrive at about 1:45 pm (the Holiday Storyteller starts at 2:10 and Off Kilter starts at 2:30). Look for David’s red cap – hope to see you there!