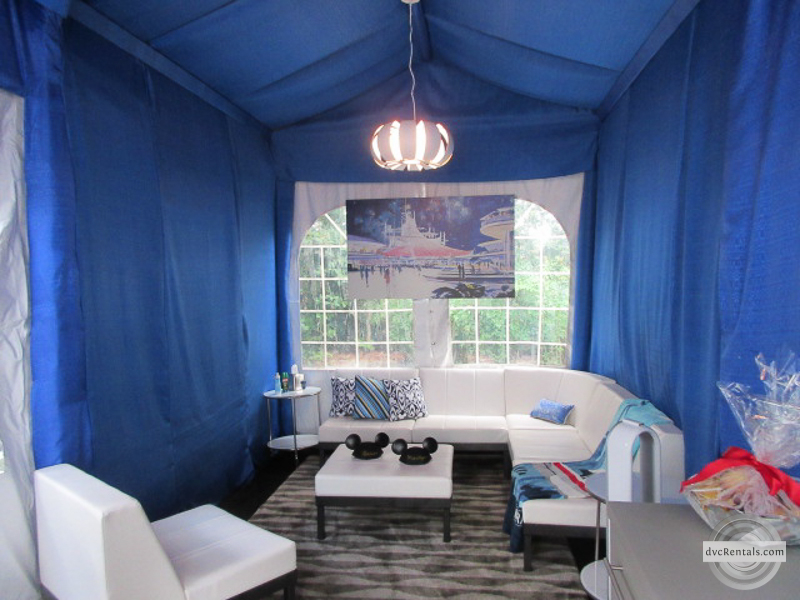 While I could never personally afford to experience a private cabana in the Magic Kingdom I have a friend who invited me to share the cabana with her for the day. Talk about an offer I couldn’t refuse! Let me tell you all about it in this blog.

This is a new experience for the Magic Kingdom; bookings only began on Sunday November 27. I called that morning and had no trouble booking a cabana for that same Thursday, December 1. I think the relative ease was due to a few factors. First, not everyone was aware of this, as it wasn’t heavily advertised in advance. Second, the cost is prohibitive to many. And third, the day we went there was a Christmas Party that night. Normally we’d have the Cabana until park closing, but we had to leave by 7 due to the party. Had we booked a non-party night we could have stayed until park closing. (Neither of us wanted to stay later, so the party was not a factor for us when we booked). 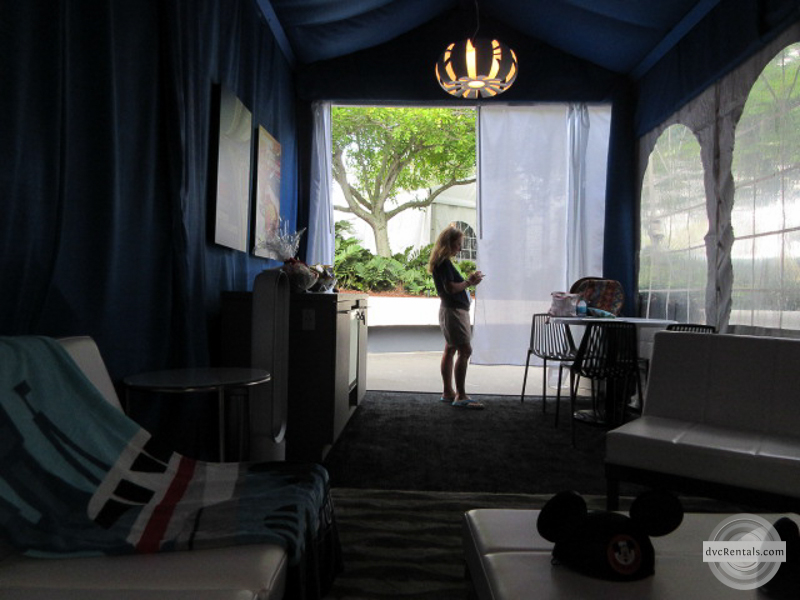 The gift shop at Space Mountain is where you go to check in, and we arrived there a little after 9AM. While it’s not mandatory to arrive at 9, if you want to get the most out of the day, that is the earliest you can check in. We were very warmly greeted by two very friendly Cast Members. They took our payment (when you book they don’t charge your card right away, and you have 48 hours to cancel if you change your mind), and we received special lanyards to identify ourselves to ensure access to the cabanas throughout the day. 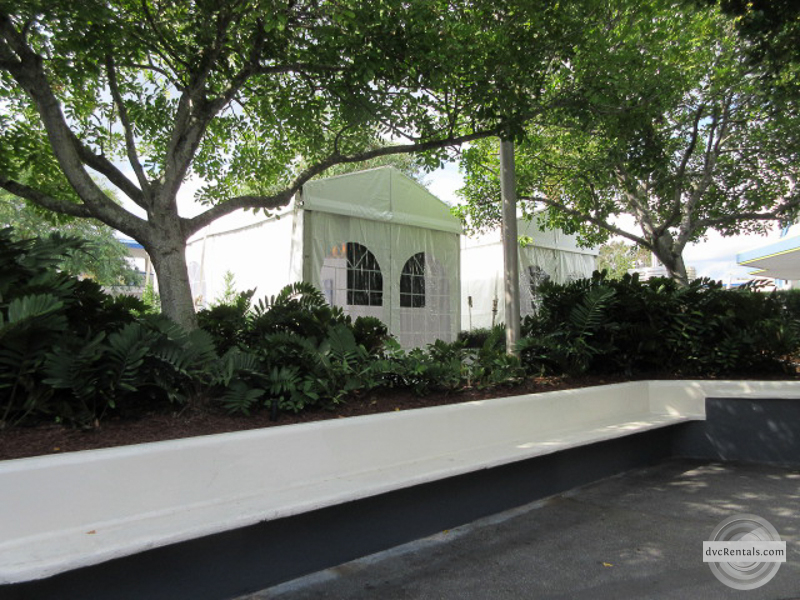 We were escorted to the cabana area, (there are 4 cabanas in total) which is very well hidden behind some carefully placed large hedges in a corner of Tomorrowland to the right of Space Mountain. If you know the bathrooms that are between Space Mountain and the Carousel of progress the cabanas are located not far from that area. However, they are set back and you really get the feeling of your own little place inside the Magic Kingdom. About the only thing you hear is the sound of the Walt Disney Railroad chugging by every now and then. The Railroad is behind the cabanas about 50 feet or so. Out of curiosity my friend and I rode the RR to see if we could spot the cabanas from the train, and even with knowing exactly where they were we could just barely see a little bit of the back of one. So, they truly are private.

Once we reached the area we were introduced to a Cast Member who told us she was there for anything we might need. She gave us a phone number so we could text her from anywhere in the park if we were headed back to the cabana and we wanted her to bring us something. She was a very sweet young lady, eager to help and very smiley. She led us over to Cabana #1, our home for the day. 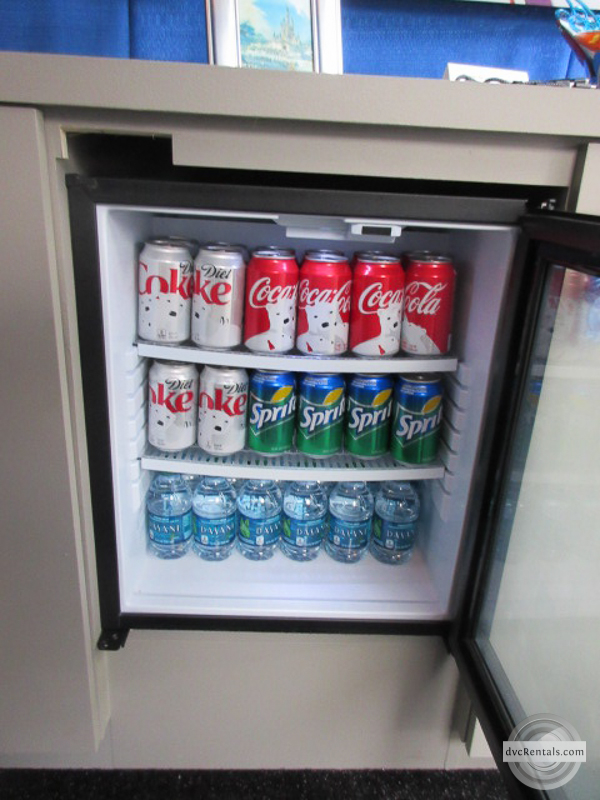 The Cabanas are made of some sort of tent-like material, possibly muslin, supported by strong poles. You don’t feel like you’re in a tent, more like a little cabin. Each Cabana has a little sign out front that identifies who is using it that day. When you enter the Cabana, there is a welcome sign with the name of the party who rented it. On the counter, you’ll see a bowl of fruit and a bowl full of snacks. There is a mini fridge filled with soda and water (if you run out you can ask for more at no additional cost). On one side of the fridge is a door that when opened reveals salt, pepper, various condiments, napkins, cups, forks, knives and spoons. On the other side of the fridge is a locker with a removable key to stash anything you don’t want to carry around the park with you. 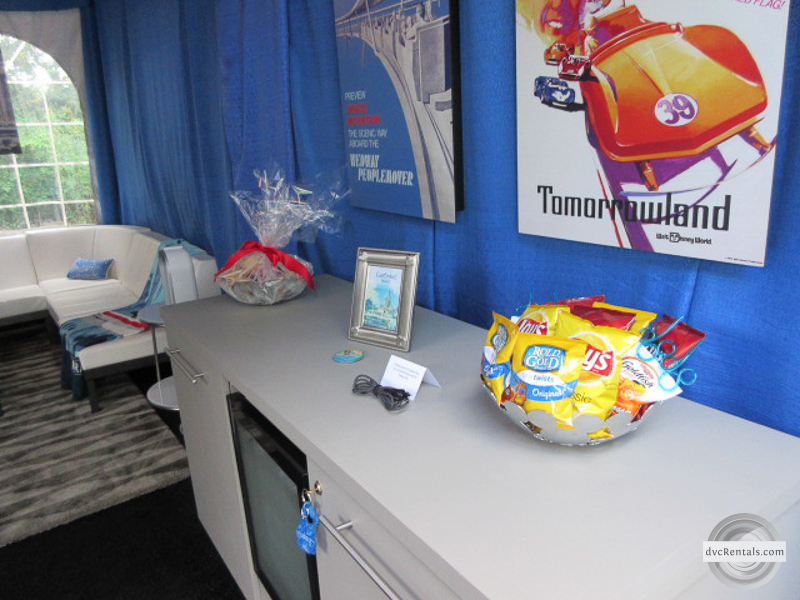 There is a big coffee table, and each member of your party will find personally embroidered Mickey Ear Hats on the table. There are tissues, a bottle of hand sanitizer (we got the Stitch design, not sure if that varies from day to day or cabana to cabana). The furniture is very modern looking, the couch being quite large, L shaped, with material made of white vinyl. The coffee table is the same material and color. There are comfy pillows to lean on and a blanket if anyone gets chilly. There is a small round table in one corner that is most suitable for eating a real meal (as opposed to snacks). The coffee table is rather low and if you eat there you’d have to bend down a lot. Since the cabanas are advertised as being for groups of 8 or more, you’d either have to take turns eating meals at the table or make use of the coffee table. There is no way 8 could fit at the higher table. There is also a vinyl chaise lounge that matches the rest of the furniture. The walls are decorated with nice posters of Tomorrowland attractions. And as a nice bonus there is a place to charge your cell phone, which includes the cords you need. 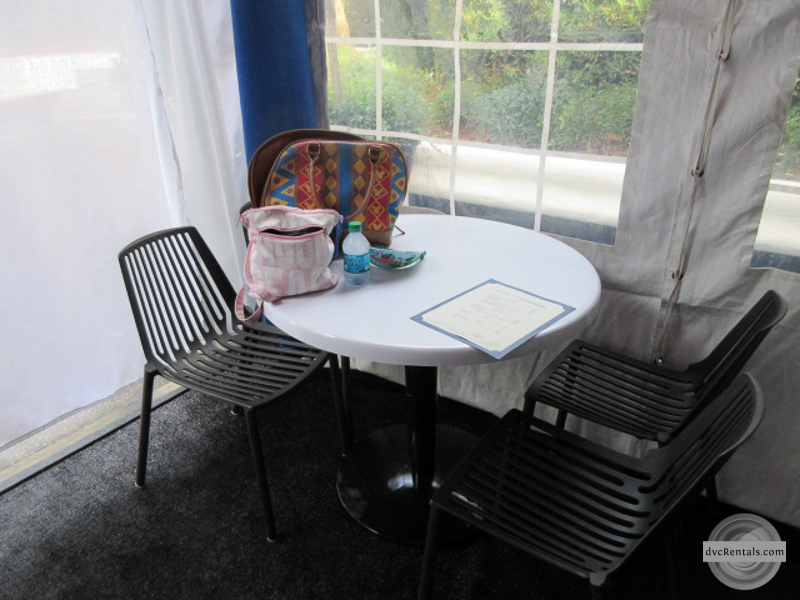 This experience may be best to do in cooler weather. The cabana has a Dyson bladeless fan that oscillates, but in all honesty on a hot humid day it won’t help very much if the cabana is full. It was pretty warm the day we went, but since there were just two of us we were able to position the fan to blow in our direction and stay cool. If 8 people were in there I think we’d have been uncomfortably warm. I have read that if the cabanas are a success they will build more permanent structures, and hopefully those will include A/C. There is electricity to run the overhead lights and the fridge, so there’s plenty of light and the drinks stay nice and cold.

A menu is provided and the cast member told us to give her 20 minutes’ notice if we wanted to order anything. We quickly realized the menu was from Cosmic Ray’s, the fast food place in Tomorrowland. When it was time for lunch we were walking past Ray’s on the way to the Cabana, so we picked up our food ourselves and carried it back on a tray. It’s not a far walk at all and it was nice to not have to wait for the food to be brought to us. But having the option to order is nice. 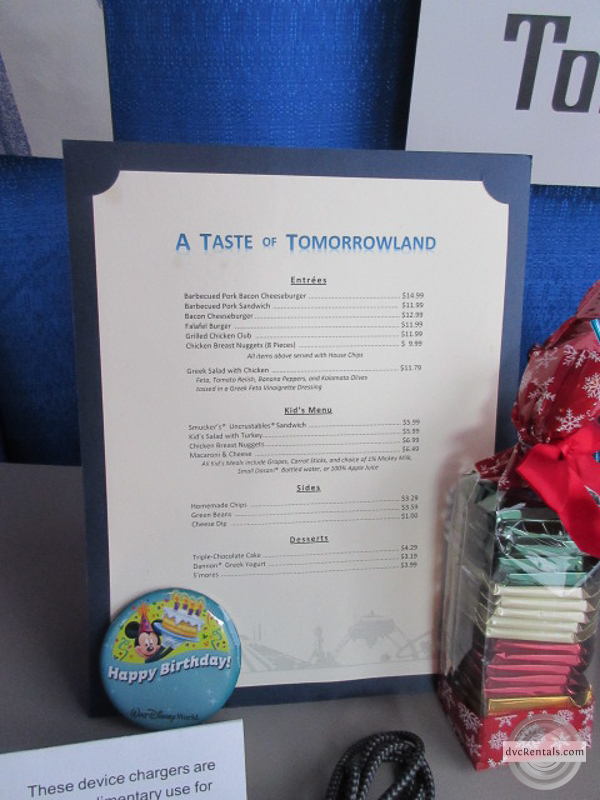 In addition to the above amenities, VIP seating for the parade and fireworks are included with the Cabana rental. The seating for this is on the Railroad platform at the beginning of Main Street, and offers an excellent view. As mentioned earlier the day we were there was a Christmas Party night, so we did not see any fireworks. But we did take advantage of the parade seating, which was very nice.

We were at the Magic Kingdom until about 4:30. We could have stayed until 7 if we had wanted to, and if the park was open later we would have been allowed to stay until park closing. Out of the 7.5 hours or so we were there I’d estimate we spent a bit more than 90 minutes in the Cabana. I’m sure if we’d stayed longer we would have been in there longer as well. At the end of our stay we told the Cast Member we were leaving and we were presented with a big bag of multi flavored Ghirardelli chocolate as a “thank you”. We asked, and were told we could take as much of the food and beverages home with us as we cared to. I’m glad I had a large purse, because I could fit a lot inside. For that price, I wasn’t leaving anything there that was OK to take home, LOL!

Speaking of the price… there has been a lot of controversy over the cost. With tax, for the entire day it costs $690. While that certainly is not cheap by any standards I look at it this way: How many people are willing to plunk down $329 a person for the wine table at Party for the Senses? Yes, you get lots more food at the party but it’s only 2.5 hours long. And how many folks go on tours that cost a family of four hundreds of dollars for 3-4 hours? Parasailing at the contemporary last about 10 minutes and costs $95 per person. You get the Cabana and personalized service all day long (plus all the amenities I have mentioned). It’s not for everyone, I totally get that. Everyone must choose how they want to spend their money. But I can definitely see it as a fun place for a bridal party to hang out, or a place for the older Mouseketeers to chill out and still be able to spend time with the rest of their family instead of waiting at a resort for them. Of course, it can be fun for anyone to have a “home” inside the Magic Kingdom! 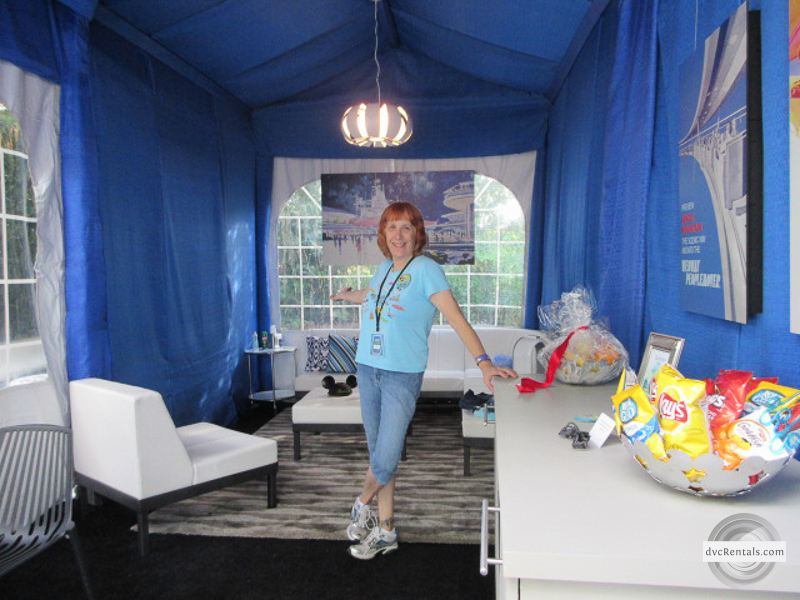 Final thoughts:  It was a really nice experience and felt very “VIP”. I like that the cabanas don’t encroach on anyone’s view of the Magic Kingdom, so if you’re not interested you won’t even notice them. The little touches, such as the embroidered ear hats and special seating for parades were very cool touches. My friend said she liked it so much she would consider doing it again someday. If she invites me, you know I’ll say yes! To book this experience call 407 WDW-PLAY. If you’d like to see a video I shot of the cabanas check it out on our Facebook page: https://www.facebook.com/dvcRentals/?ref=bookmarks.