In April, I was lucky enough to travel to Walt Disney World with three coworkers for a research trip. Having only ever been to Walt Disney World with my family, I was excited to experience new adventures with a different group of people. We had a lot of fun and a lot of laughs and, even though I had been to Disney many times before, I learned a lot from the knowledgeable group with whom I was traveling. 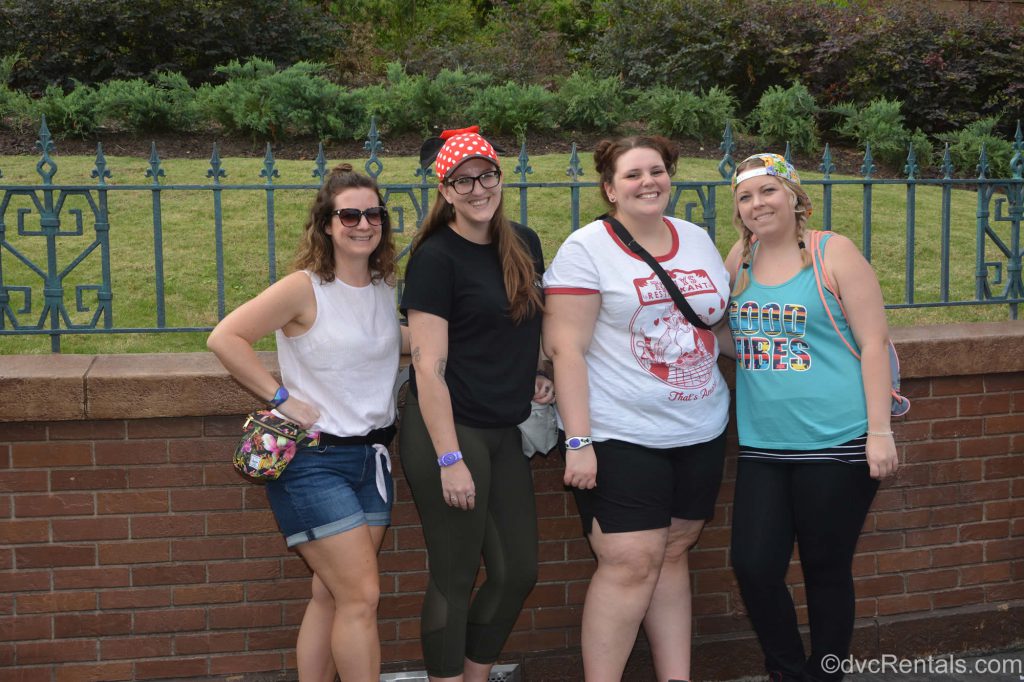 My favorite part of the trip by far was when we got to experience the Caring for Giants Tour. This is a tour offered at Disney’s Animal Kingdom Theme Park that educates guests on how the Cast Members care for their African Elephant Herd and lets guests see the elephants in a much closer setting. 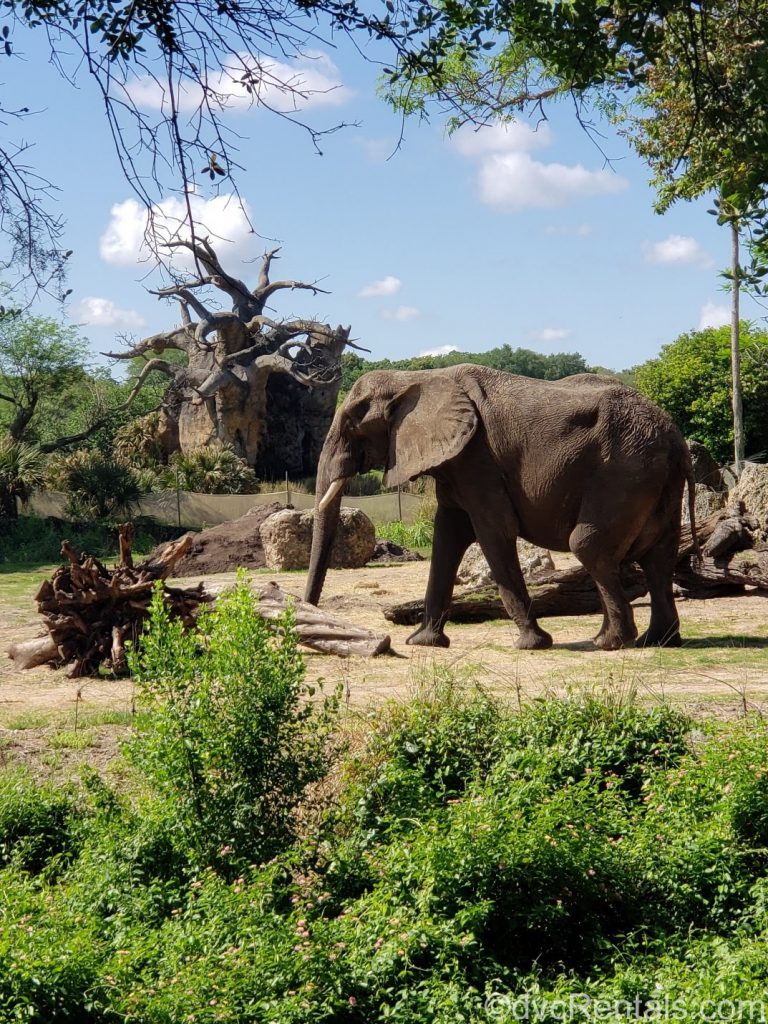 The tour is at an extra cost on top of your park ticket, which is currently $30 per person and is offered 8-9 times a day.  As times are subject to change, it is always a good idea to check times when booking on Disney’s website. If you’re a DVC Owner or Annual Passholder be sure to mention it at time of booking in case Disney may be offering an additional discount.

The check-in desk for the Caring for Giants Tour can be found at the Animal Tours Booking Centre, located across from the Standby entrance for Kilimanjaro Safaris. 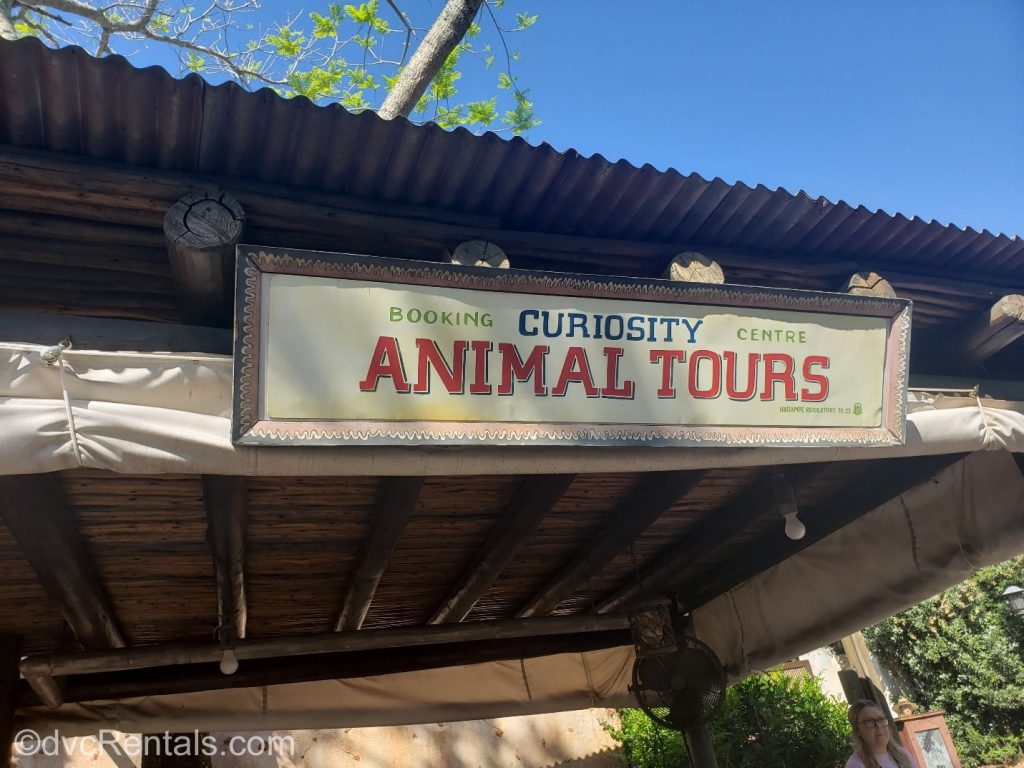 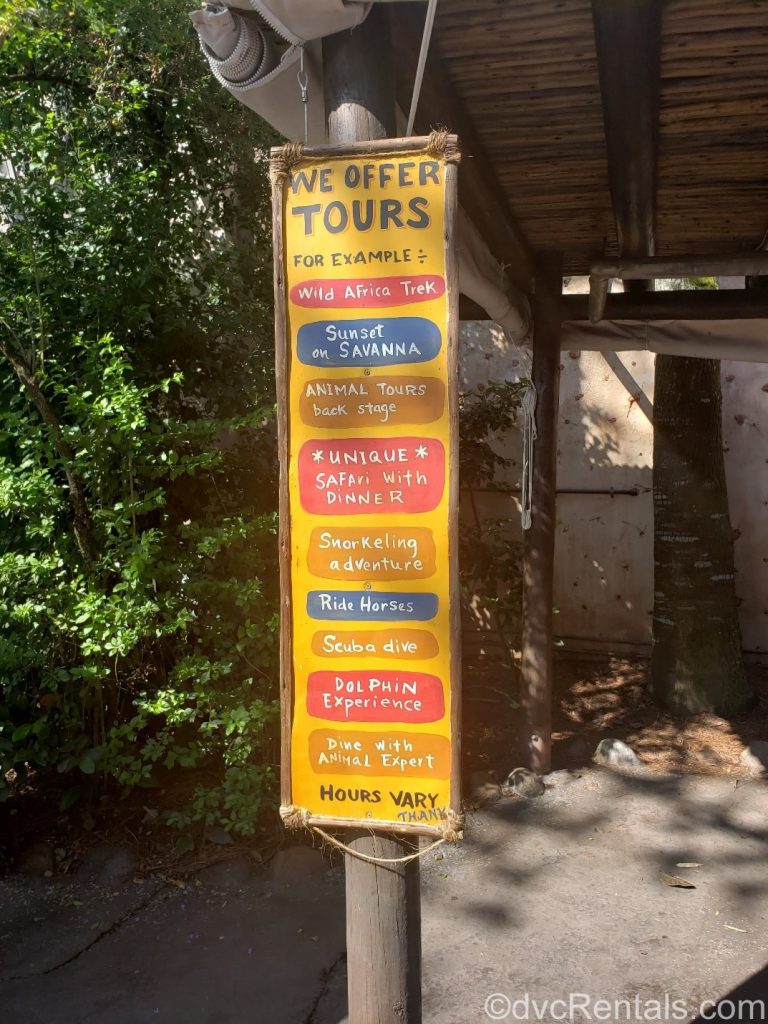 The check-in process was relatively simple, only having to sign a few forms for safety and security. Once checked in, they handed us name tags to wear during the tour.

After receiving my name tag, I flipped it over and saw printed on the back of the paper that the paper was made of 85% elephant dung! We learned later in the tour that elephants eat a lot of grass throughout the day and have a hard time breaking down the fibers from the grass. The leftover fibers located in the elephant dung can be used to create paper and is much more environmentally friendly on the planet. I thought this was very interesting as it was something I had never heard of before! 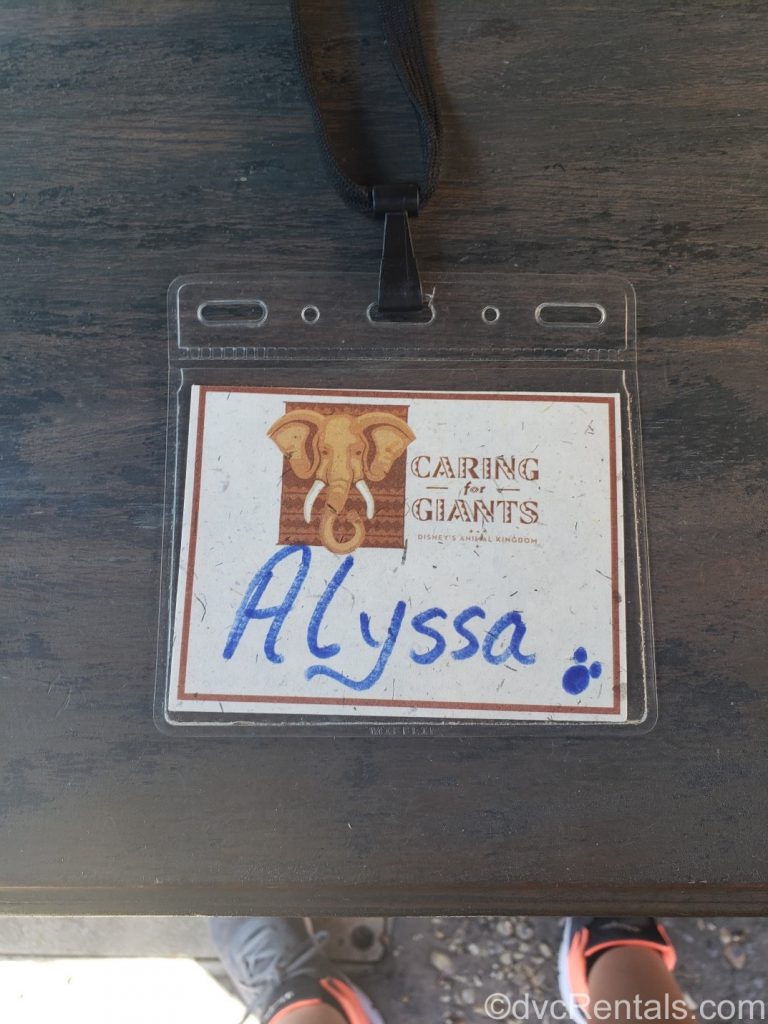 As the tour starts, our guide met us at the check-in desk and informed us we would be going Backstage. Going Backstage in Walt Disney World is a big deal, and the guide made sure to tell us multiple times that there are absolutely no pictures or videos permitted Backstage. Disney does this to ensure that they maintain the illusion they create for the guests within the parks.

Once Backstage, we were escorted to a shuttle van. This was our transportation to the elephants. The ride was short, taking us behind Kilimanjaro Safaris and past the barn where the elephants stay during inclement weather. The elephants’ barn was very large, and made of steel so that it can withstand a Level 5 Hurricane. It is equipped with everything an elephant could need, as well as being accredited by the Association of Zoos and Aquariums for having all the correct specifications for keeping captive elephants.

Walt Disney loved animals, and to this day, Disney does everything they can to educate about animals and assist in caring for them. All of the animals at Disney are taken care of in the most humane way possible, and Disney has even assisted in raising the population count of certain species by giving them a safe place to mate.

We then arrived at the viewing platform. The viewing platform for this tour is located on the backside of Kilimanjaro Safaris. You can even see the safari vehicles behind the elephants as they drive through the ride.

This is where the elephants roam. While we were on our tour, we were lucky enough to see three elephants. The first two elephants we saw were young male bulls who were sparring when we arrived. Sparring is when the young male elephants play fight with one another in an attempt to establish dominance. Our tour guide, Shannon, told us that being able to see sparring is very rare, so we were very lucky. Shannon also ensured us that, even though it looked incredibly rough, the sparing is much less than harmful than it looked.

The elephants were so close that we were able to get some amazing pictures. 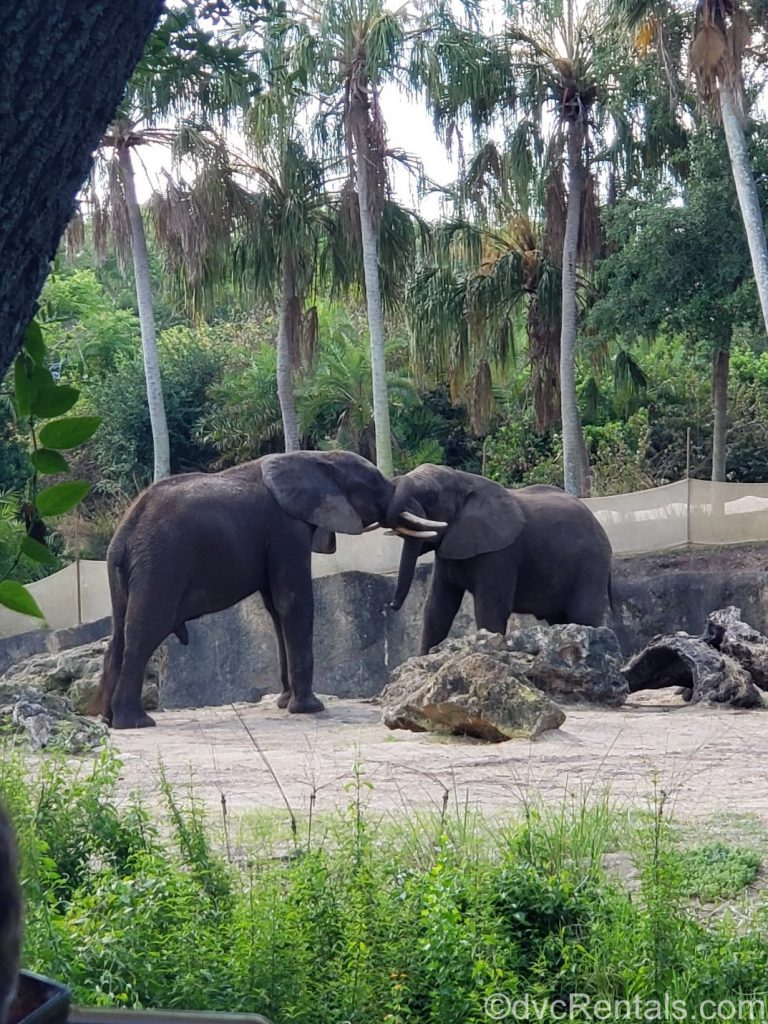 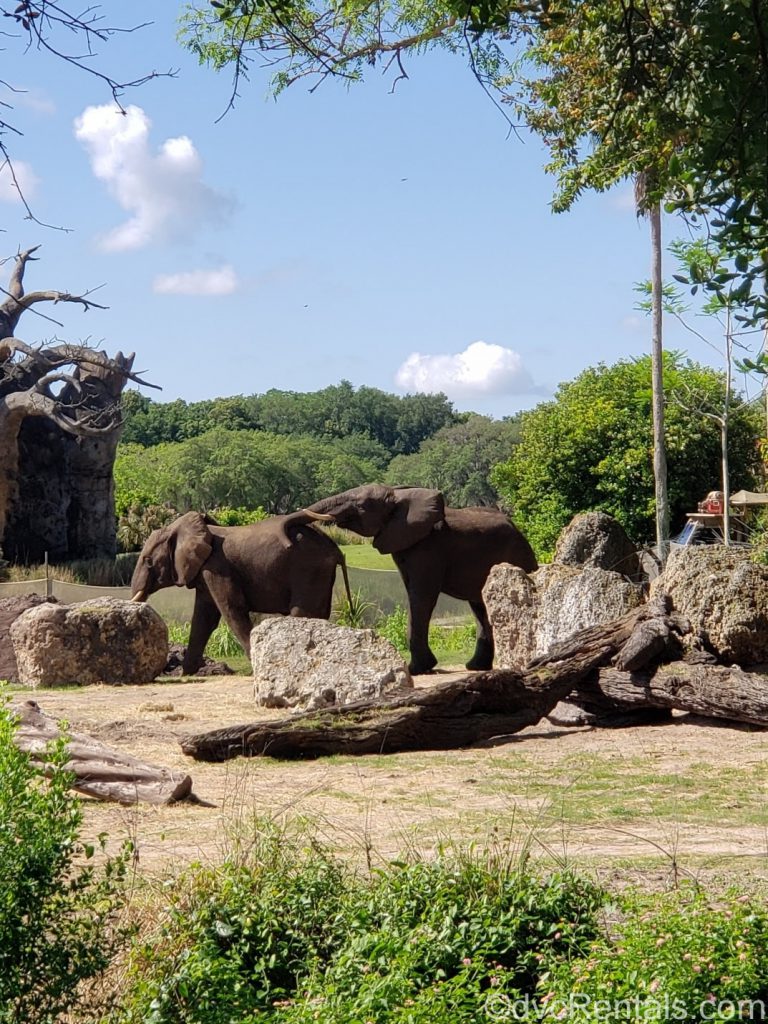 The other elephant we got to see was a larger male named Mac. Mac was a great elder, watching the younger bulls fight. He let the boys duke it out until they tried to involve him. That is when he would put them in their place. Mac was such a sweet elephant, and we were able to watch him feed while the wildlife Cast Members rounded up the younger males. The Cast Member was throwing him whole apples and carrots for him to enjoy to keep him distracted as they moved the other elephants to their barn. This is Mac. 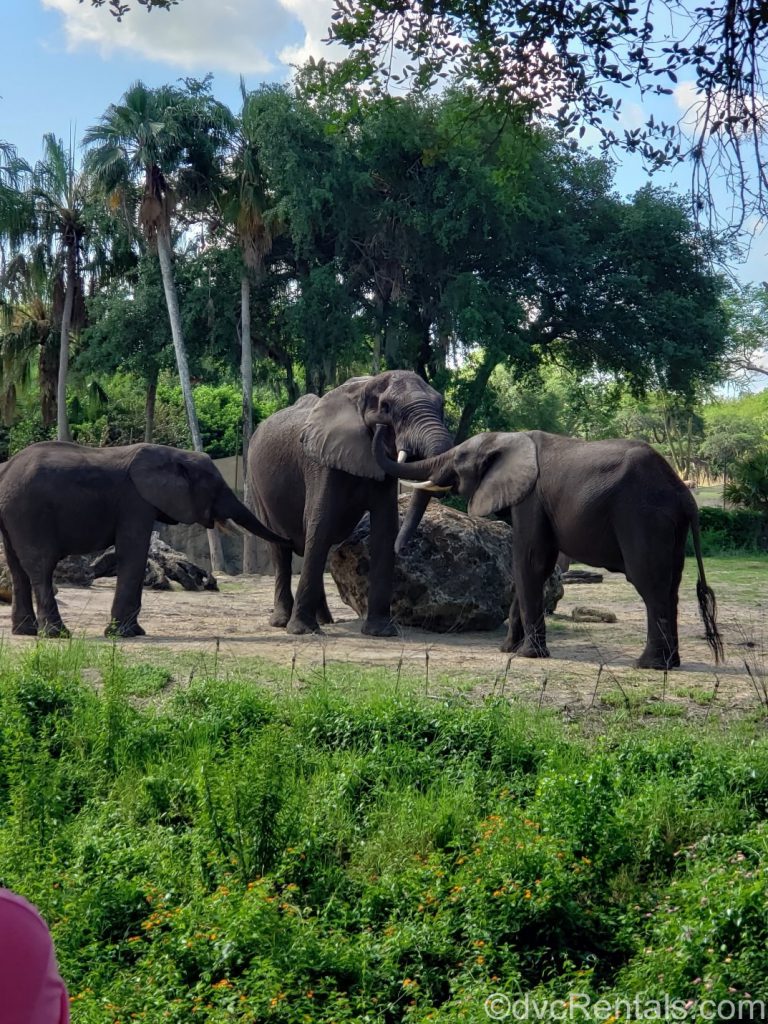 As well as being such a fun experience, the tour did a great job of explaining the history of the elephant, how poaching has affected the population, and what the world is doing to conserve the elephants we have left.

In the 1800s, there were 10 million elephants on the planet. Today, there are just under 415,000. There has been more than a 95% decrease in the elephant population. In an attempt to stop poaching, some governments in Africa have been removing snares (elephant traps) found in the wild and using them to make sculptures and jewelry. They even have a snare sculpture on display at the elephant viewing area for guests to see.

As an elephant’s tusk will yield $20,000 on the black market, poaching is a very serious problem. Most countries in Africa have criminalized poaching, to different extents from country to country. Having elephants in captivity help the elephant population so that they are able to safely breed and create more for the world.

Once the tour is finished, the van returns to take you back to the park. This little drive back gives you one last chance to ask your tour guide any other questions you may have, and our tour guide was so knowledgeable. The Cast Members that run this tour are exceptional in making it both fun and educational for everyone. This tour is completely different compared to anything else I have ever experienced in Walt Disney World, and I am so glad I got the chance to attend it. I would suggest this to anyone going to Disney, especially if you are looking to experience something different.