Behind the Seeds Tour at the Land Pavilion in Epcot 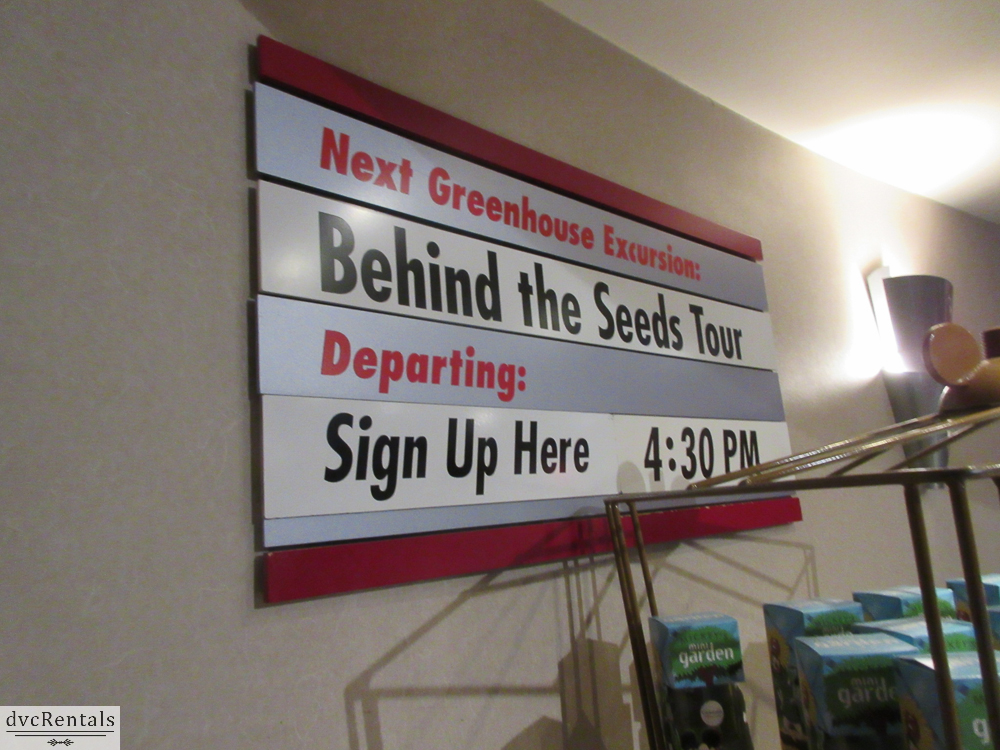 If you’ve ever gone on the Living with The Land attraction at Epcot you may have noticed guests walking through the greenhouses as you’re passing by in your boat. These folks are participating in Behind the Seeds, a behind the scenes tour of the attraction. It’s fun, it’s educational and very reasonably priced.

I took this tour on September 21st with my 30 year old daughter and her boyfriend. We booked in advance by calling 407-WDW-TOUR. You can also sign up for the tour at a podium right inside the Land Pavilion, just to the left of the entrance to Soarin’. Often there are tours available the same day if you do a walk up, although of course it isn’t guaranteed. There are 9-10 tours per day, each lasting about an hour. Times vary. The cost is $16 for children 9 and under, $20 for adults, plus tax. Park admission is required. Annual Passholders, Disney Visa Card holders and Disney Vacation Club members receive a 15% discount. 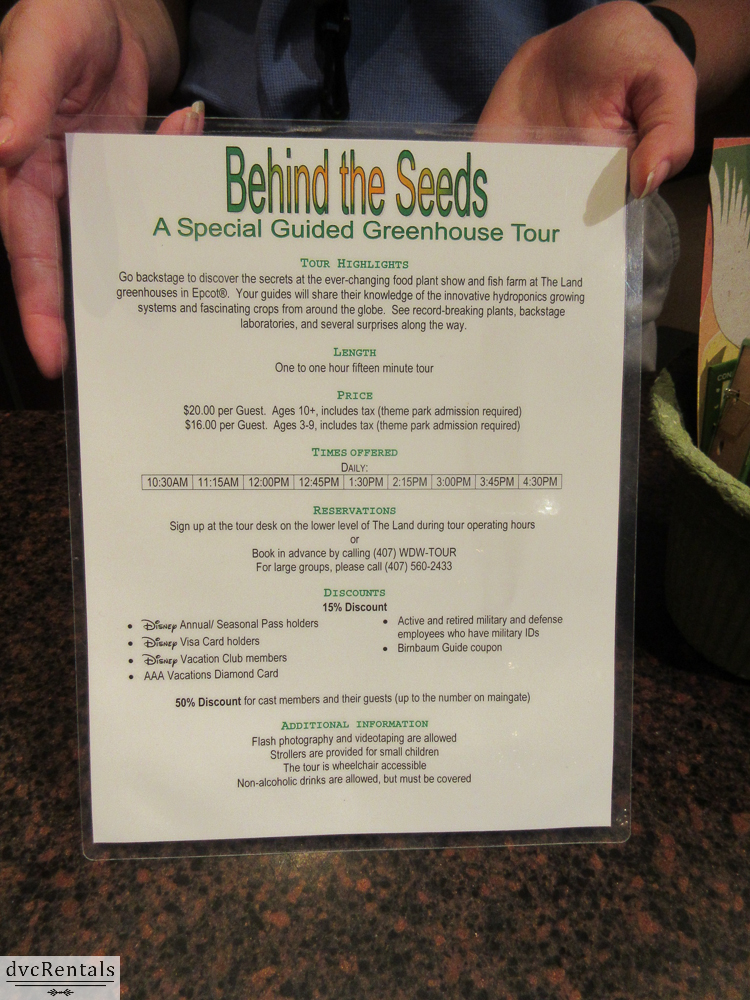 We were told to check in 15 minutes early at the podium mentioned above. After check in we were given (paper) name tags and directed to a set of benches to wait for the rest of the group and for our tour guide. We were booked for the 4:30 tour, and we left exactly on time. Our guide’s name was Ky, short for Kyle. He was an intern, and I got the feeling he was a little new at being a tour guide. Although he was very knowledgeable he seemed a bit ill at ease. 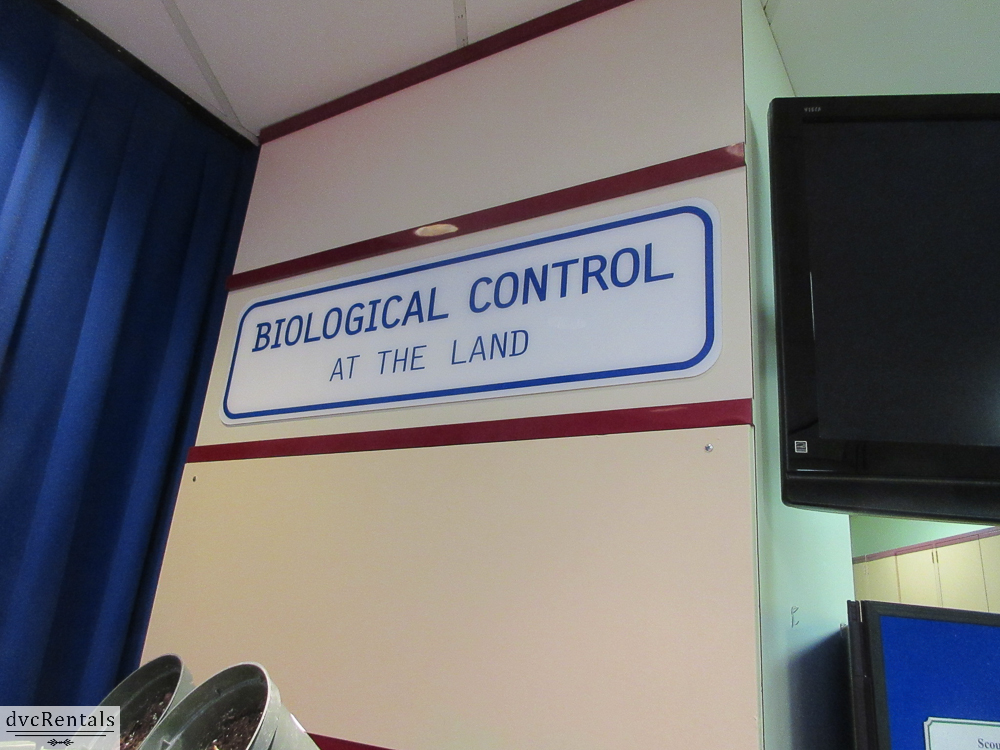 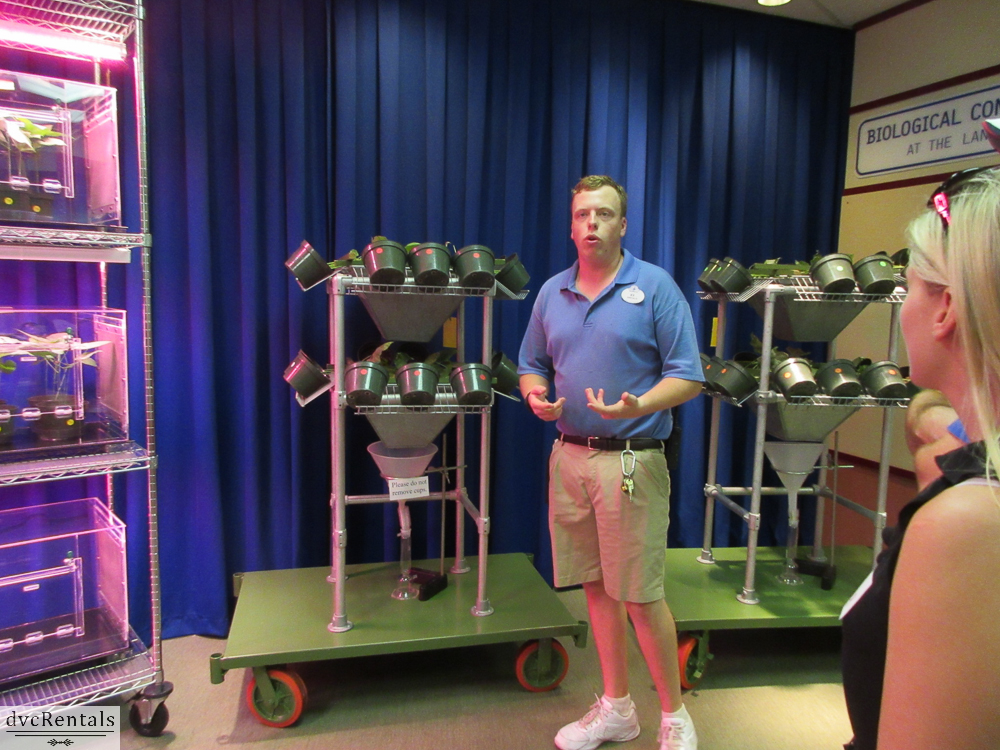 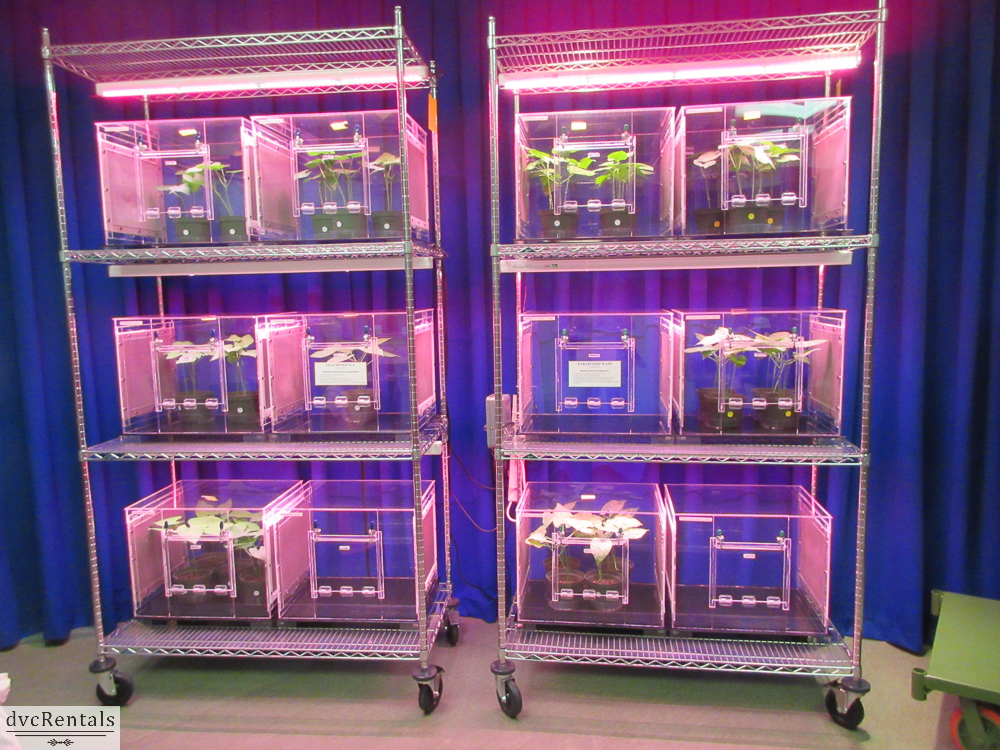 We ventured out to the first area, which was a lab where they study natural ways to control pests that harm plants. We were told that the sand in the greenhouses is a big draw for bacteria and they must be very careful to wear booties when walking there and not touch anything. Ky said that a few years ago all of the sand had to be replaced because of a massive bacteria outbreak. He also showed us some of the techniques they used to control insects, while trying to avoid using harmful chemicals. He explained to us how they get rid of a fly called a “leaf miner”, using parasitic wasps that kill the larva (eggs) that the flies produce. The wasps don’t bother the plants, they only eat the fly larva. 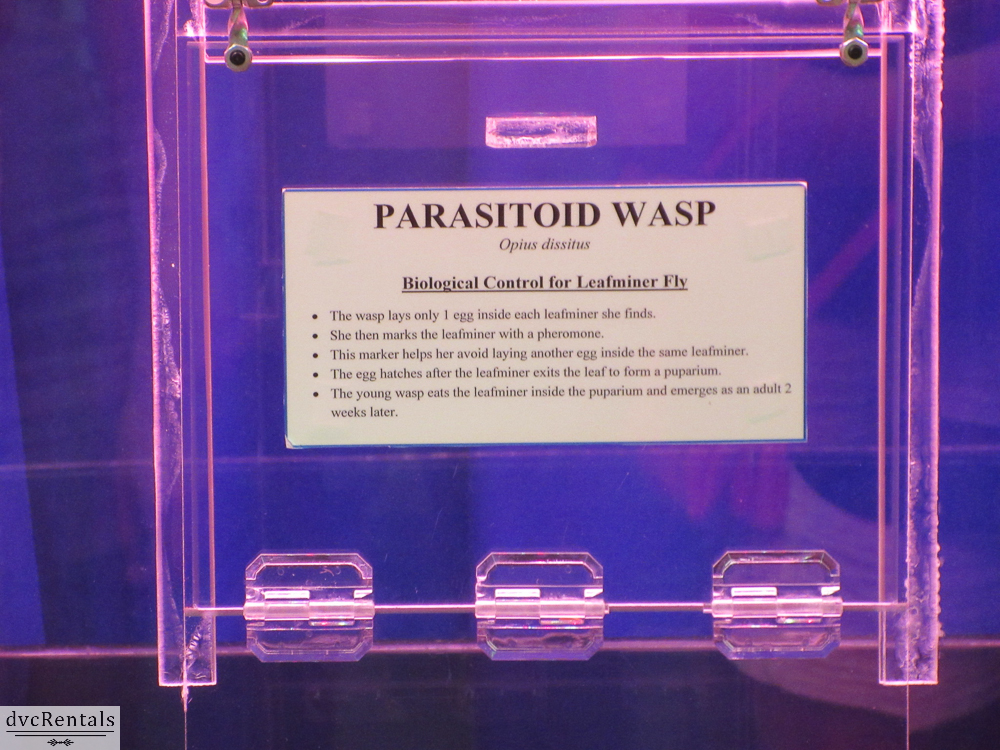 Our next stop was the Biotechnology Lab for Crop Improvement. Here is where plants are grown from tissue cultures. These plants are valued for being completely germ free and sterile. They are for sale at the land, but the types of plants available can vary. Ky told us that because they are known for producing absolutely bacteria-free safe plants that these tissue cultures can be brought through customs to another country with absolutely no problems. 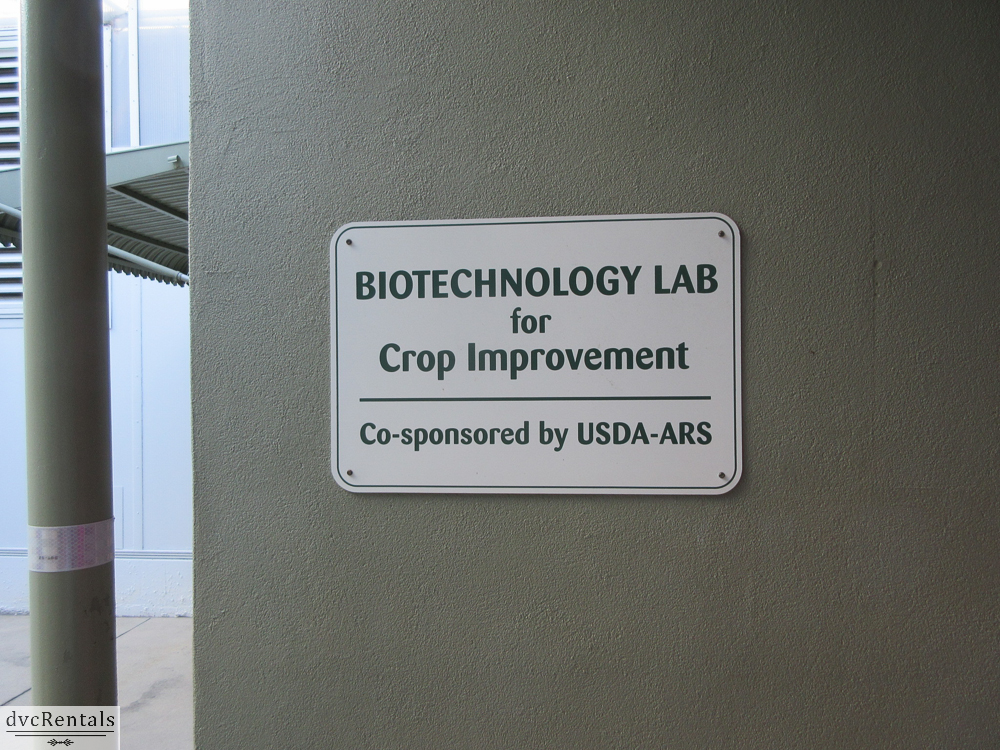 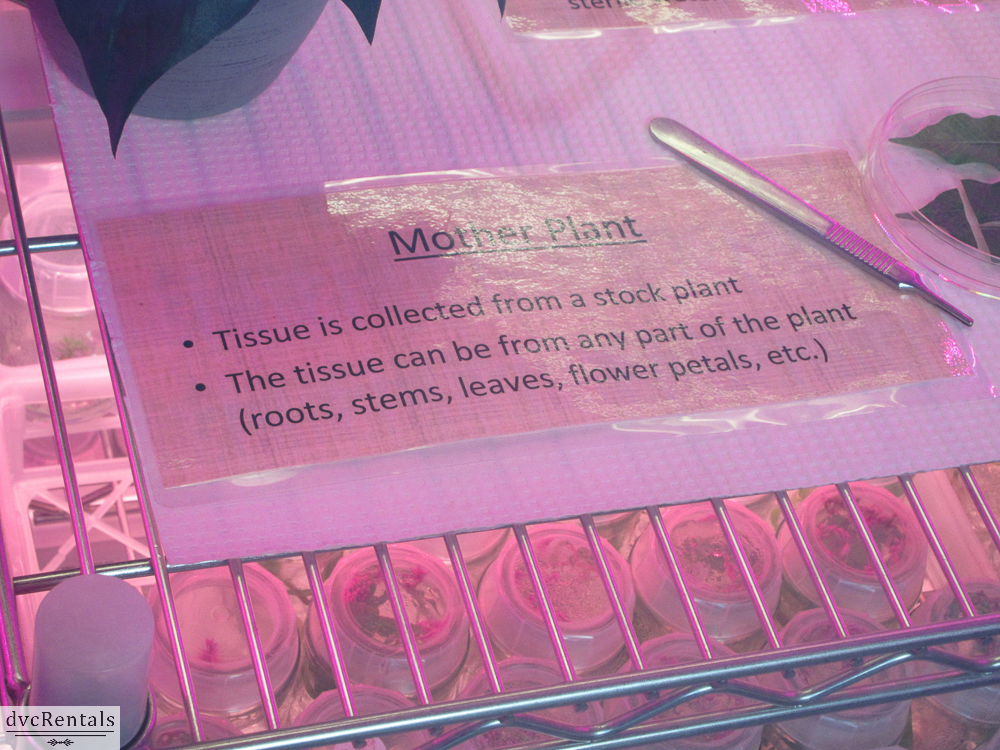 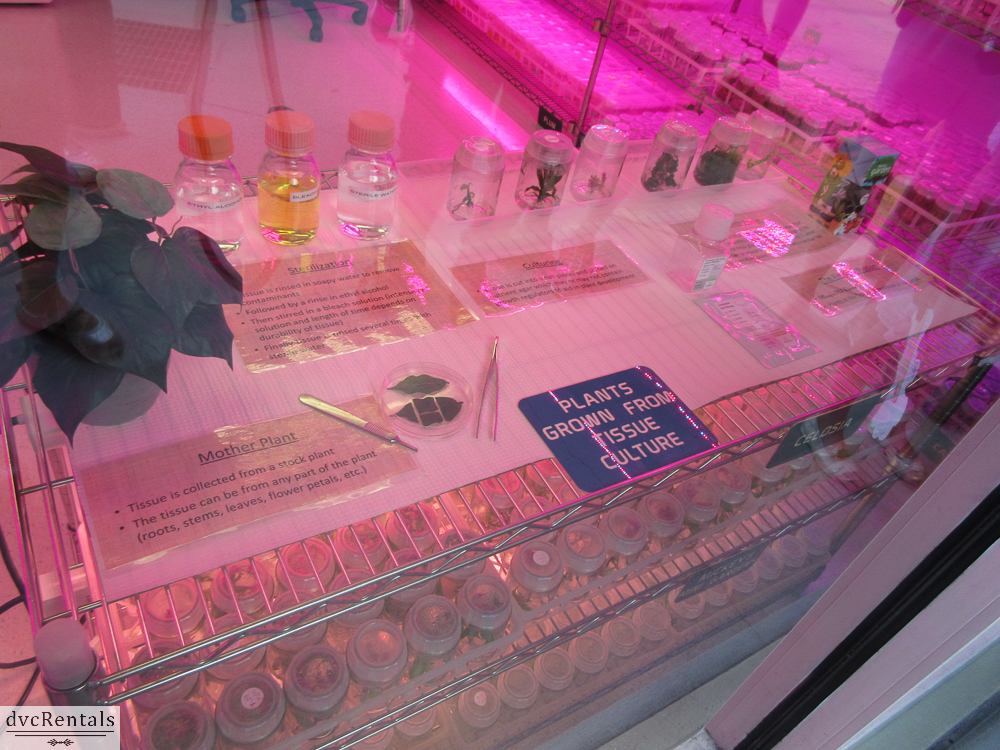 Now it was time to enter the greenhouse part of the tour. We were told not to touch any plants, as we could contaminate them. We learned that most of the food grown in the greenhouses is edible and many of the fruits and vegetables are used in restaurants throughout World Showcase in Epcot. It was fun to be standing in a place I had been past in a boat many times, and it felt special to be there seeing guests ride by in their boats. 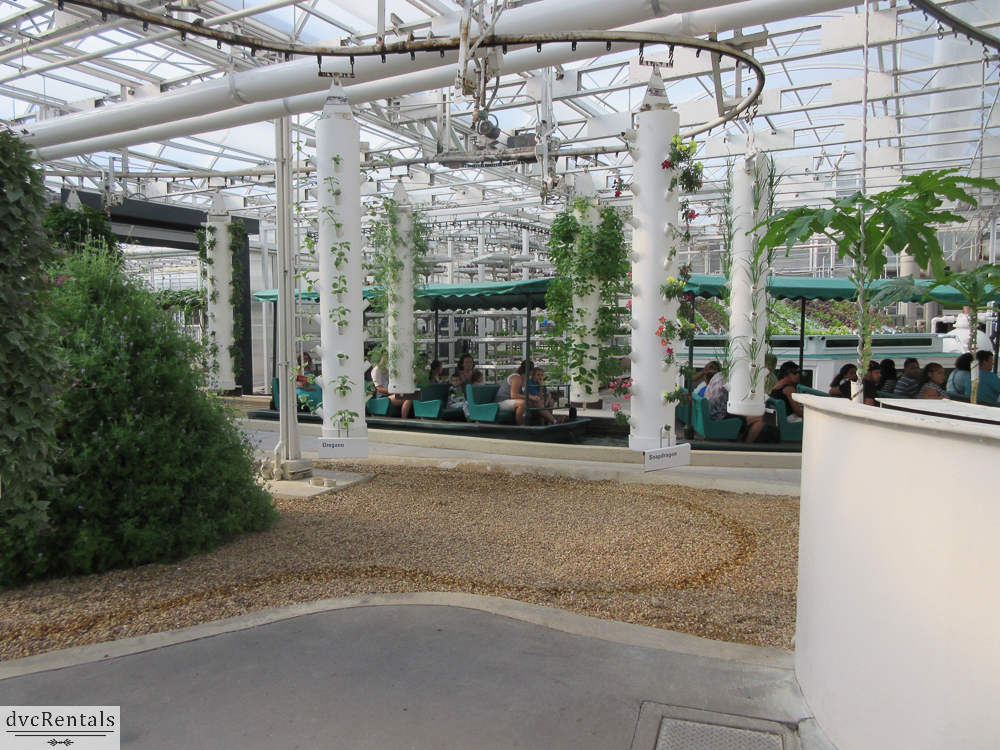 Much of what you are told on the tour is similar to what you hear on the attraction, but there is a lot more detail and you can ask as many questions as you like. We were shown various methods for growing crops, among those being stacking (to save space) and hydroponics (for areas with poor soil). Ky demonstrated a number of ways both stacking and hydroponics are utilized. We then each received a sample of cucumber that was grown hydroponically. I was a little disappointed they were not Mickey shaped, as I knew that they have special tubes at Walt Disney World for growing cukes in the classic shape of a Mickey head (as a matter of fact, later in the tour Ky showed us the tube they used for this).The samples we ate were tasty and very fresh. 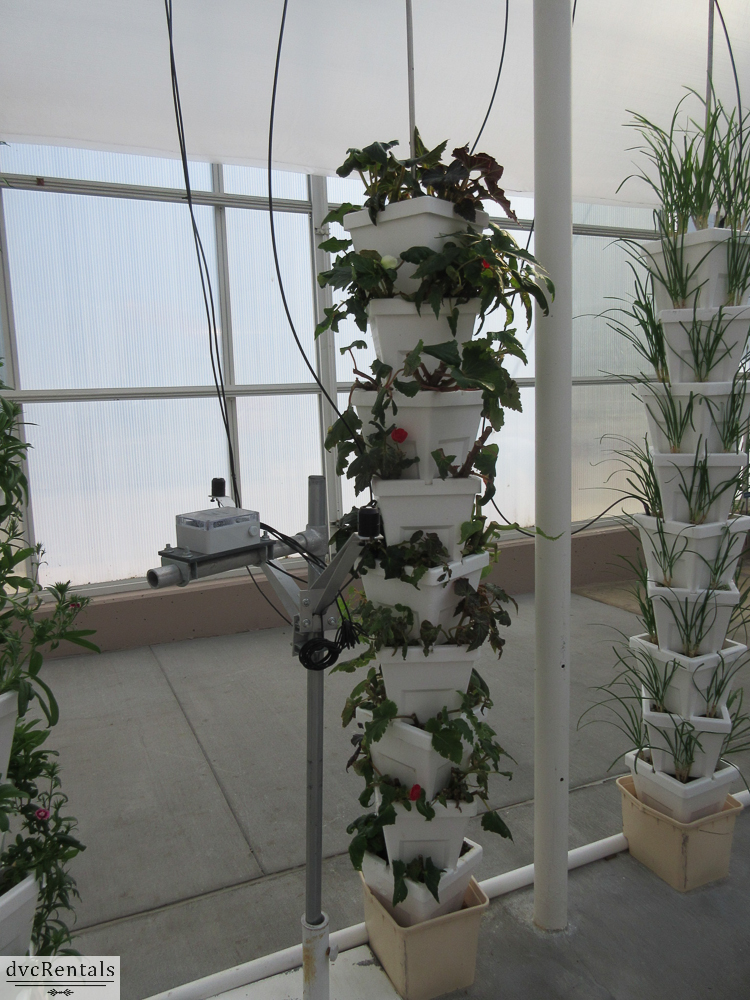 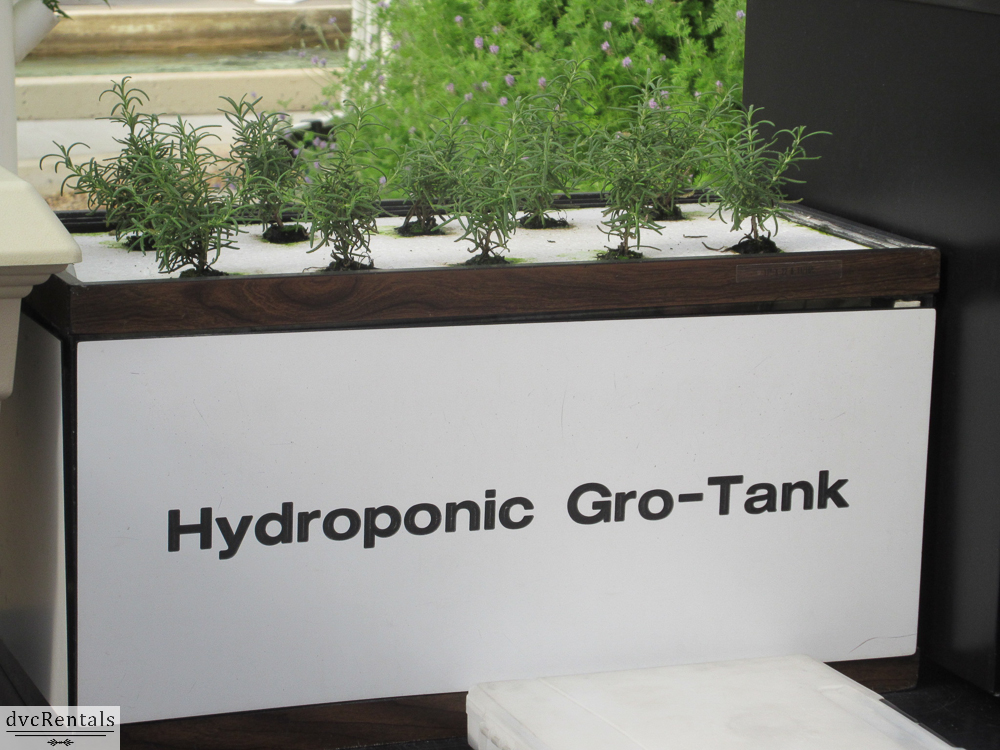 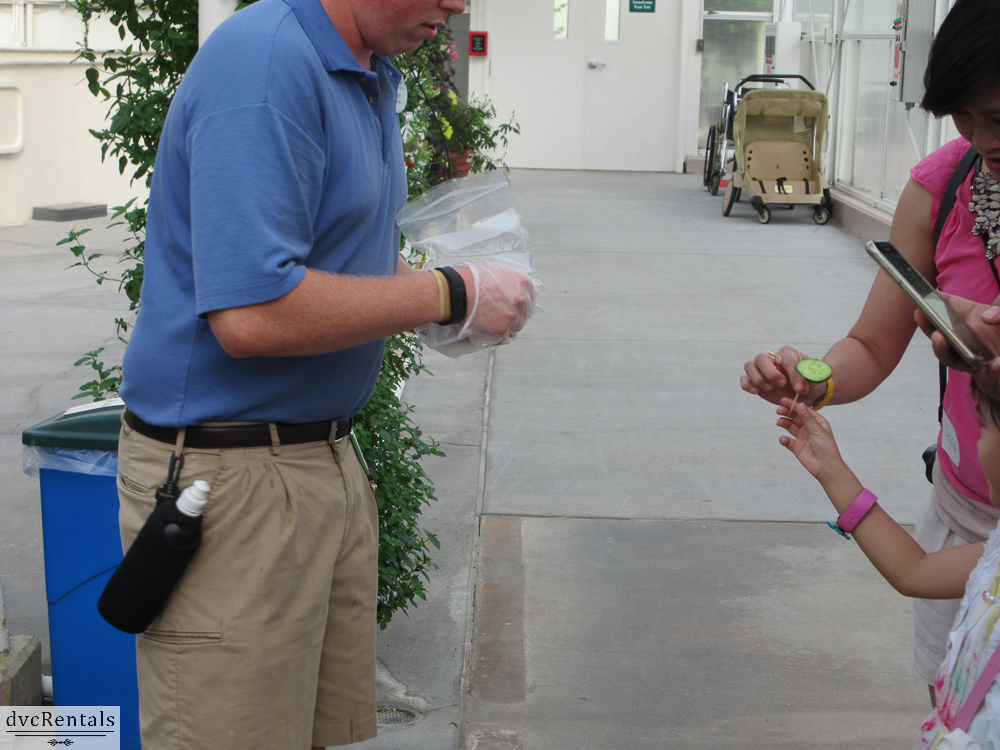 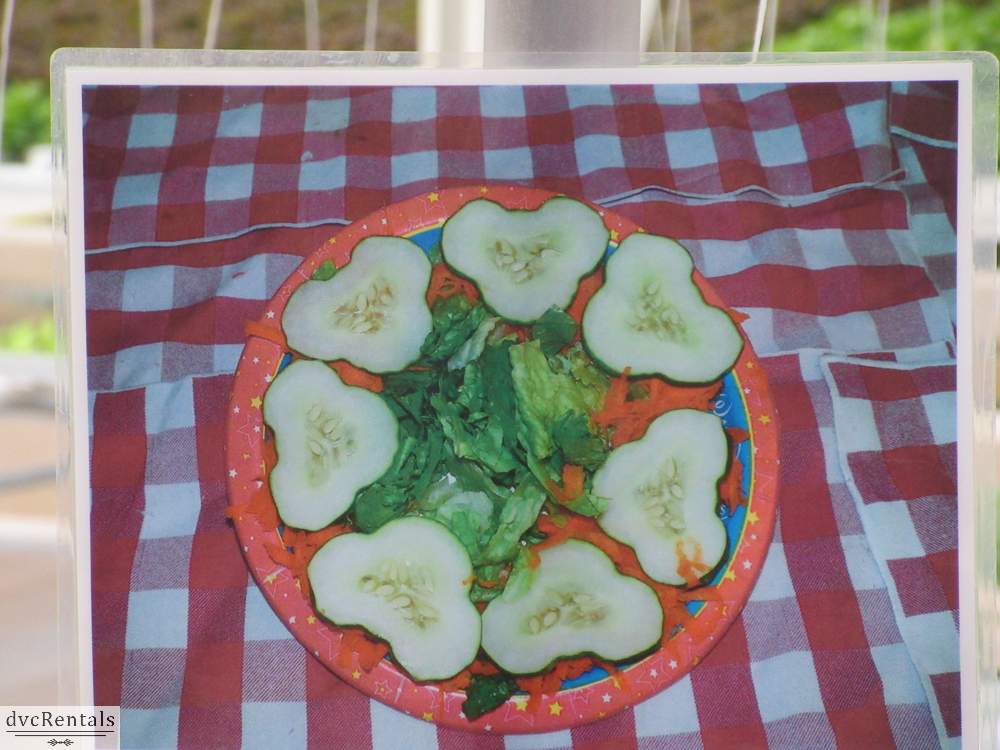 A particularly interesting and fun part of the tour was Ky demonstrating a plant that is known as the “sensitive plant”. This was the one exception to the rule where we were allowed to touch the plant. When touched, the leaves on the sensitive plant will close up. It’s very cool to slide your finger down a leaf and watch it instantly react and close up. But the most amazing thing happened when Ky took the container the plant was in and gave it a good shake. Every single leaf drooped and the plant looked completely dead. We were told that in 15 minutes or so it would return to normal. Indeed, on the way back we passed by and the plant looked perfect again. 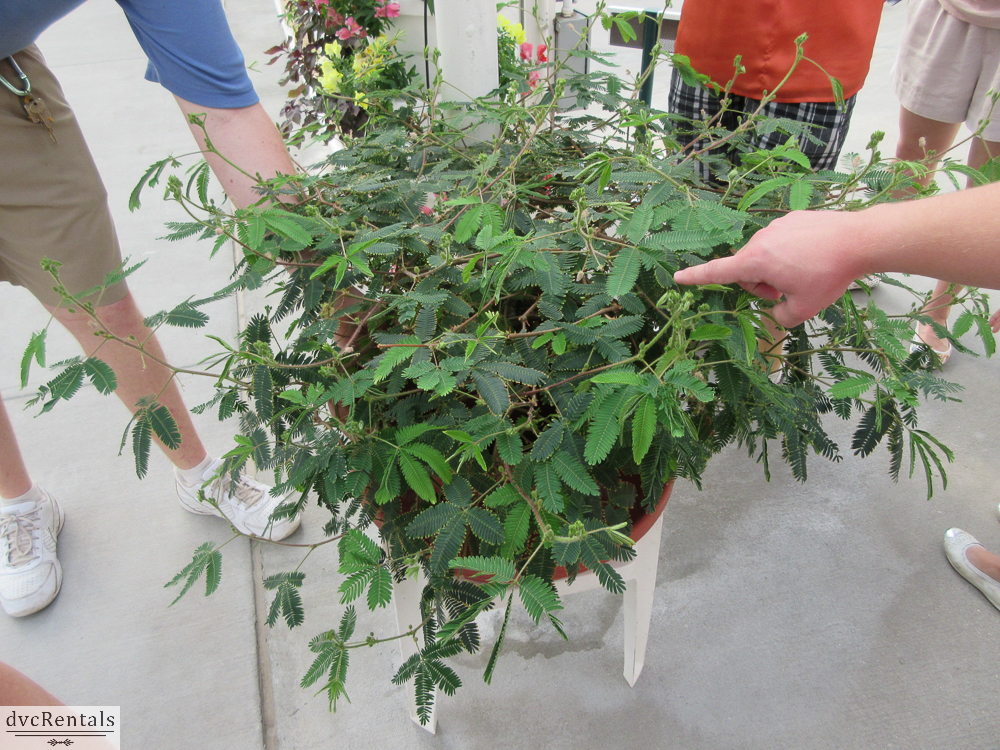 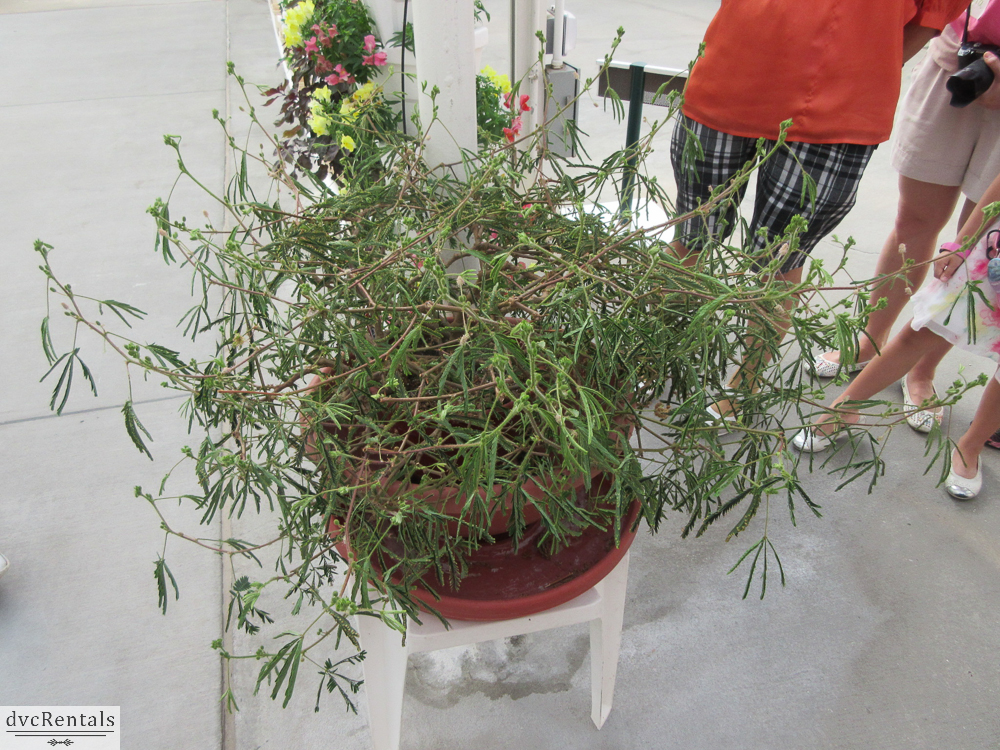 We continued on, going from greenhouse to greenhouse with Ky explaining what we were looking at and what each crop was used for. He said scientists are always looking for plants that will grow in unusual soil as well as plants that grow very large and, consequently, can sustain more hungry people. By the way, pictures are allowed on the tour in all areas, so feel free to shoot away at the interesting species of plants you pass by. There are also some “fun” photo opportunities. Ky will point out where a creative cast member drew the faces of Donald, Mickey and Minnie in the sand (assuming with something that won’t spread disease!). And at one point you’ll see a tree that was pruned into the shape of the familiar three circles we know as Mickey Mouse. 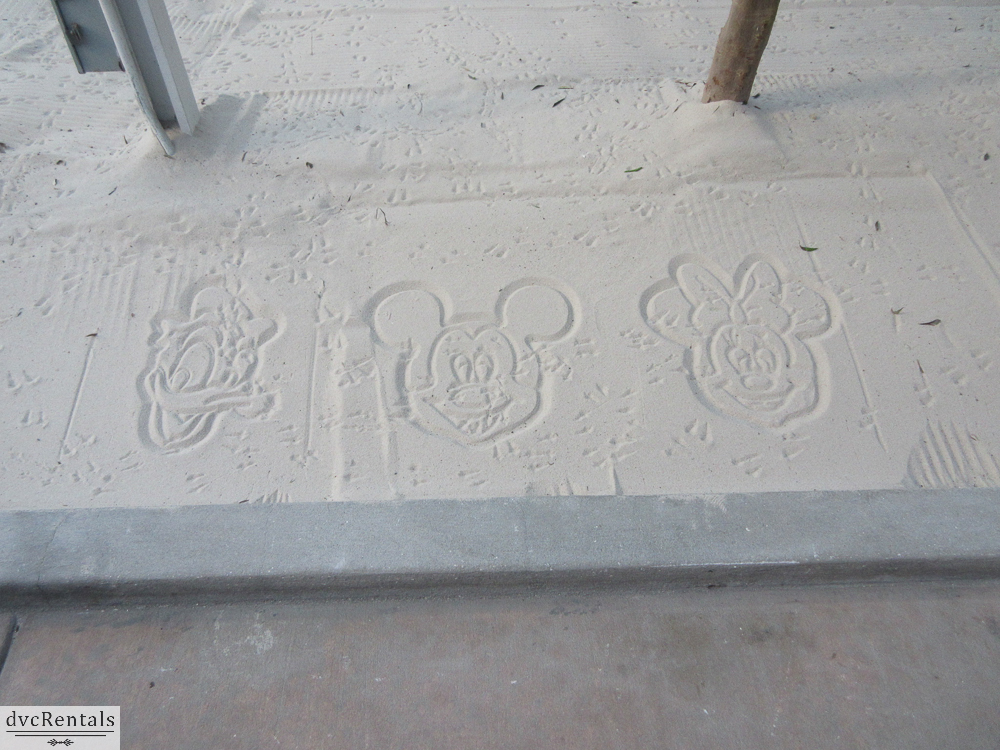 Next, we entered the area where alligators and fish are kept. The gators are not grown for food but the fish are. Disney cast members “aquafarm” in huge tanks that are able to efficiently grow hundreds of fish at a time in a relatively small area. Like much of the fruits and veggies mentioned earlier, this fish are harvested for use in the Garden Grill Restaurant in the Land, and at other restaurants in World Showcase. Hidden Mickey Alert! Check out the garden hose next to the fish tank. 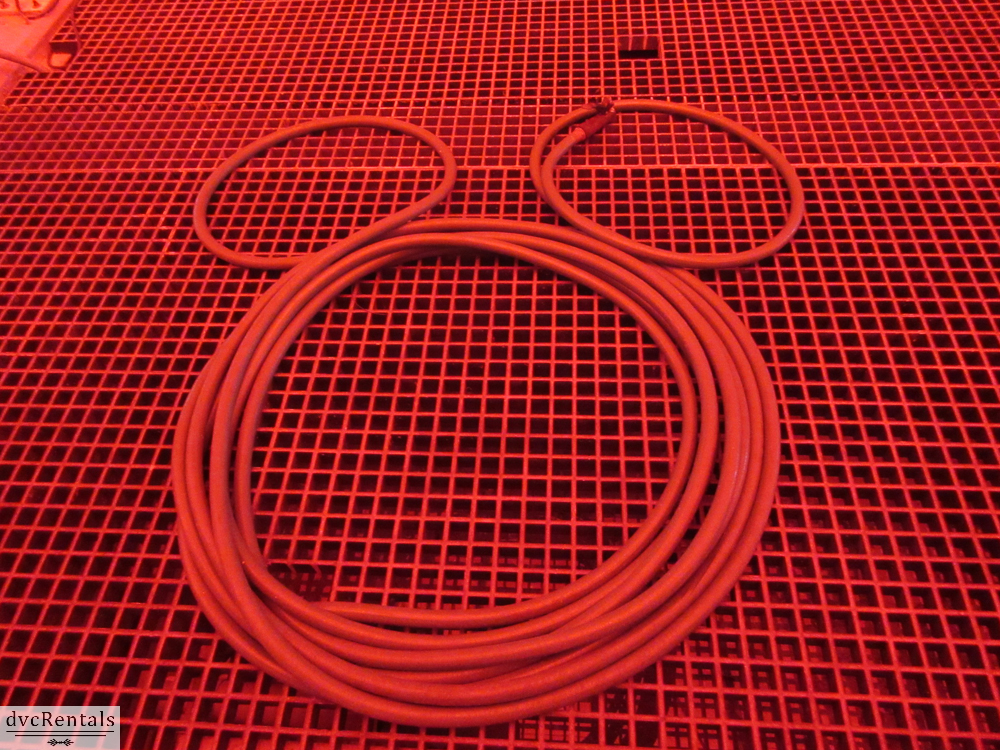 Walking past the marine area we came to another greenhouse. Spice was the theme here and Ky passed around jars for us to sniff to see if we could guess what spices they contained. Some were obvious (i.e. cinnamon), some not so obvious (i.e. allspice). This is the place to search out the hidden Mickey tree I wrote about earlier, but if you don’t see it your tour guide will point it out. This area concluded the tour. We walked back the way we had come in. Ky encouraged us to buy one of the tissue culture plants sold in the land, thanked everyone and then said his goodbyes. 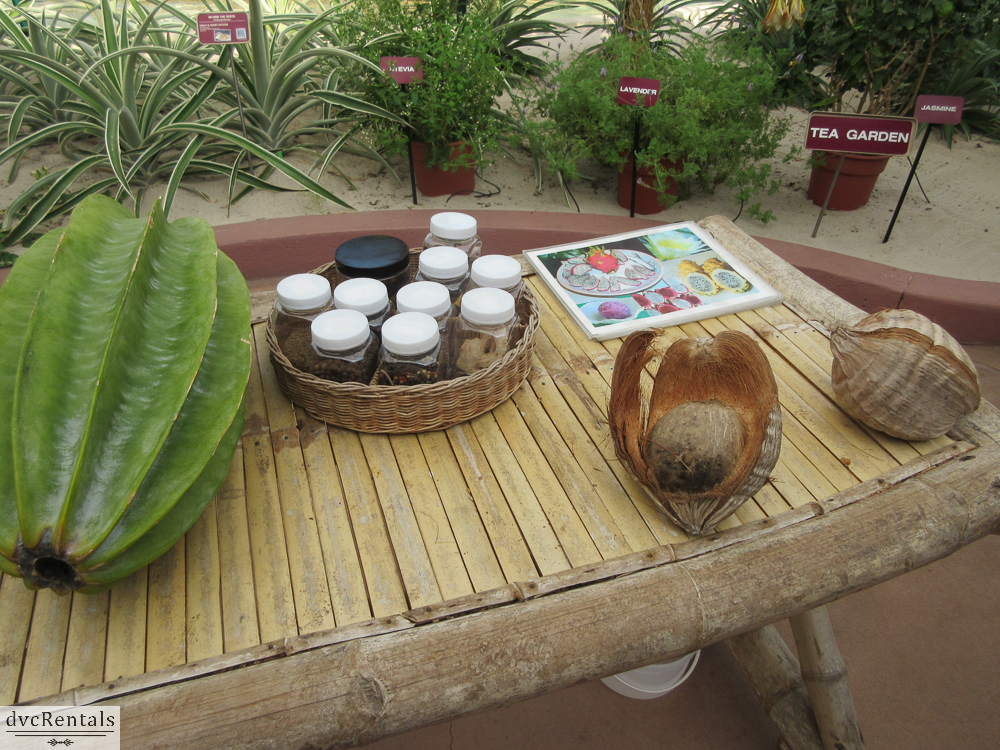 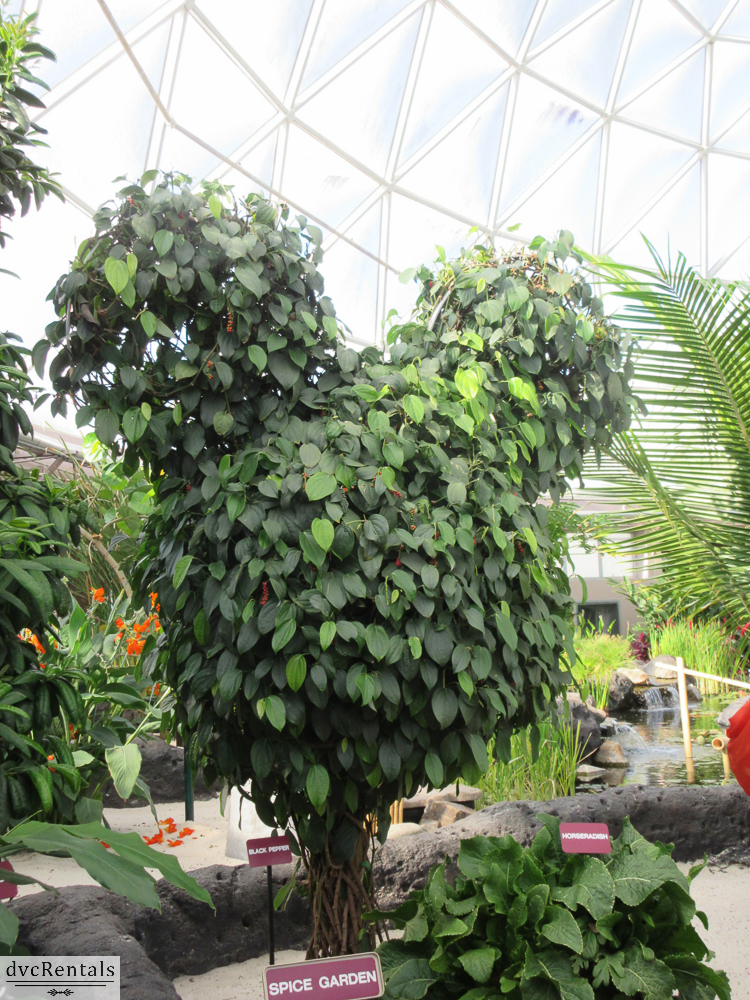 I don’t think it’s a tour many kids under 10 or so would enjoy (unless they love gardening).
It’s geared more towards adults. There was one little girl on the tour who was about 8 and while she was very well behaved she didn’t seem to pay much attention to what Ky was saying. I could see a young child with a different sort of personality being more outwardly unhappy with the lack of fun compared to most other things at Walt Disney World. I would definitely recommend this tour to anyone who enjoys horticulture, agriculture, science, or if you’re just plain interested in learning new things. While saying it was exciting would be exaggerating, it is definitely interesting and keeps you involved. At no point was I bored. It’s always fun to see what goes on behind the scenes, and this tour was no exception.