Arriving at Andy’s Backyard – Opening Day of a New Land!

For years I’ve wondered what it would be like to be one of the first people to see a new park, a new ride, or a new land that Disney has created. 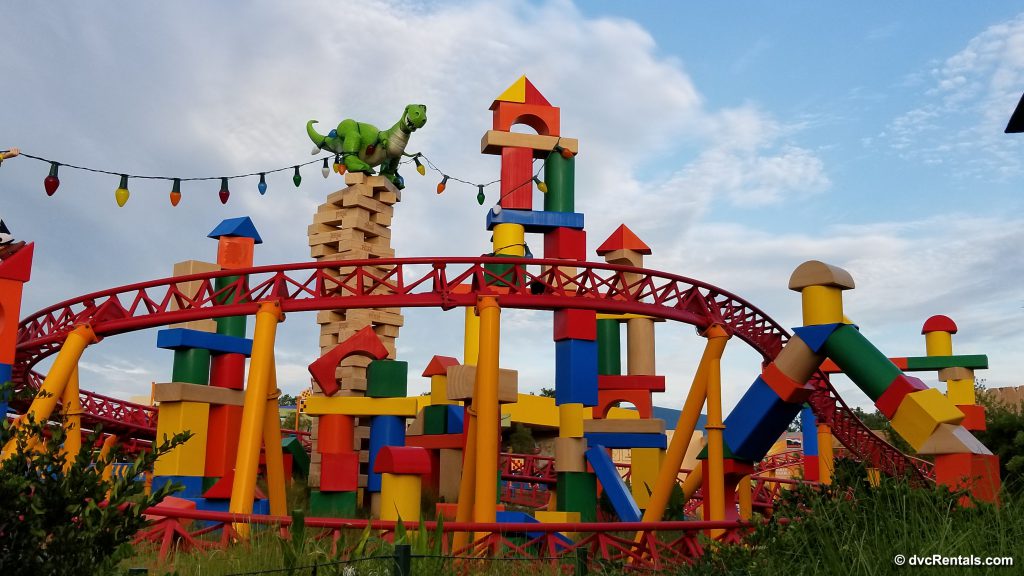 After hearing countless stories about how great of an experience it could be, I daydreamed about attending a Grand Opening.  When Disney announced that June 30th, 2018 would be the opening of Toy Story Land it was perfect timing!  Finally, I had the chance to experience first hand the excitement that surrounds WDW when a new piece of magic comes to life! 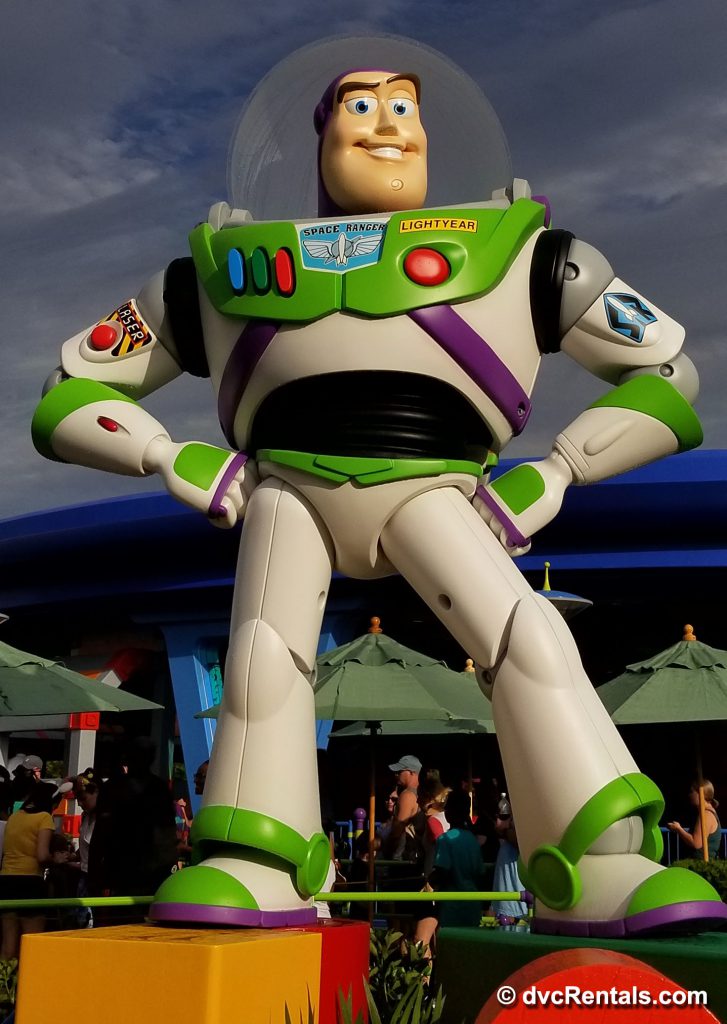 Now that this new land within Disney’s Hollywood Studios has opened and all I can say is “WOW!”  Disney got it right!  From the signs, the rides, even right down to the benches, Disney has put theming into every detail! 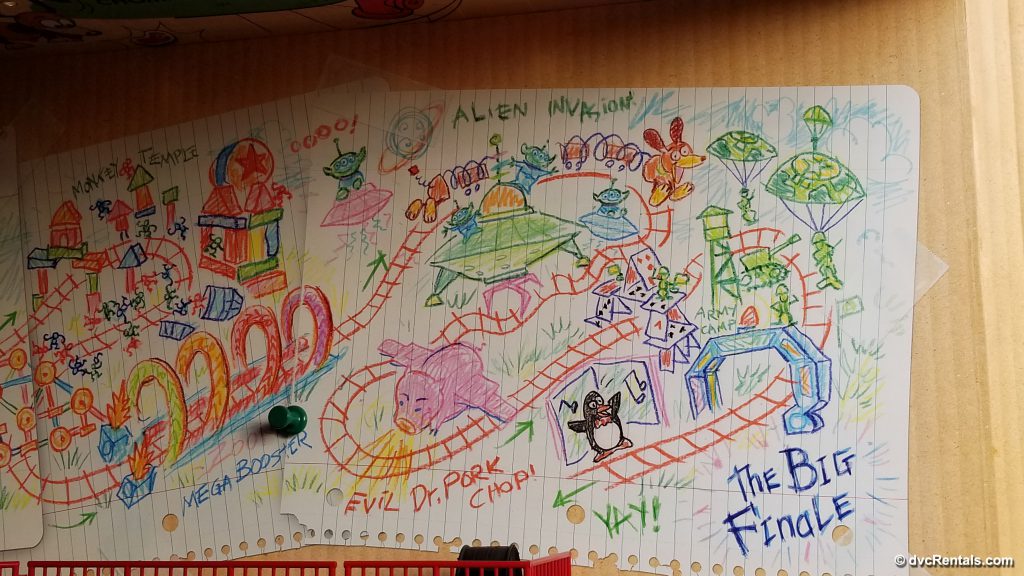 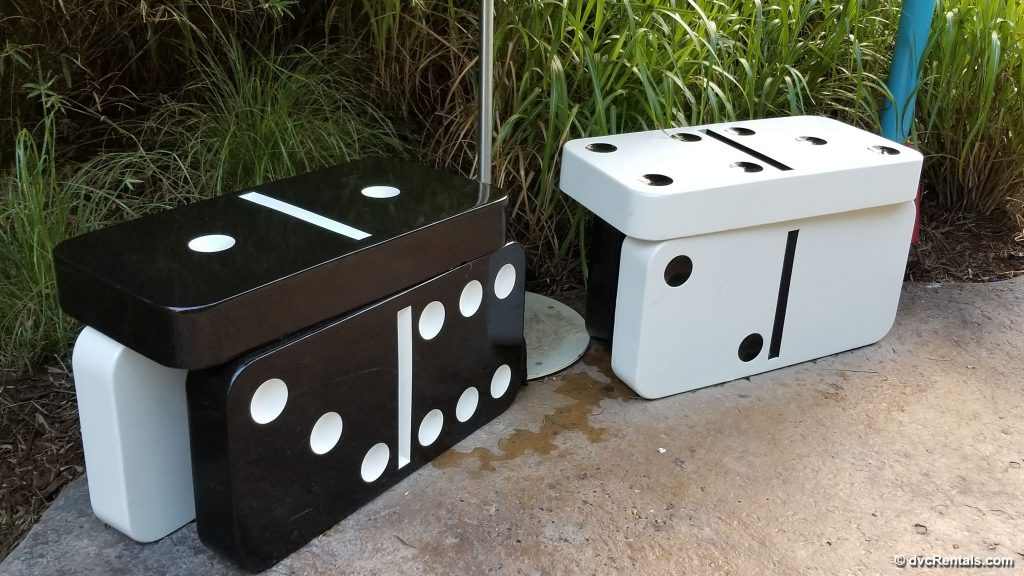 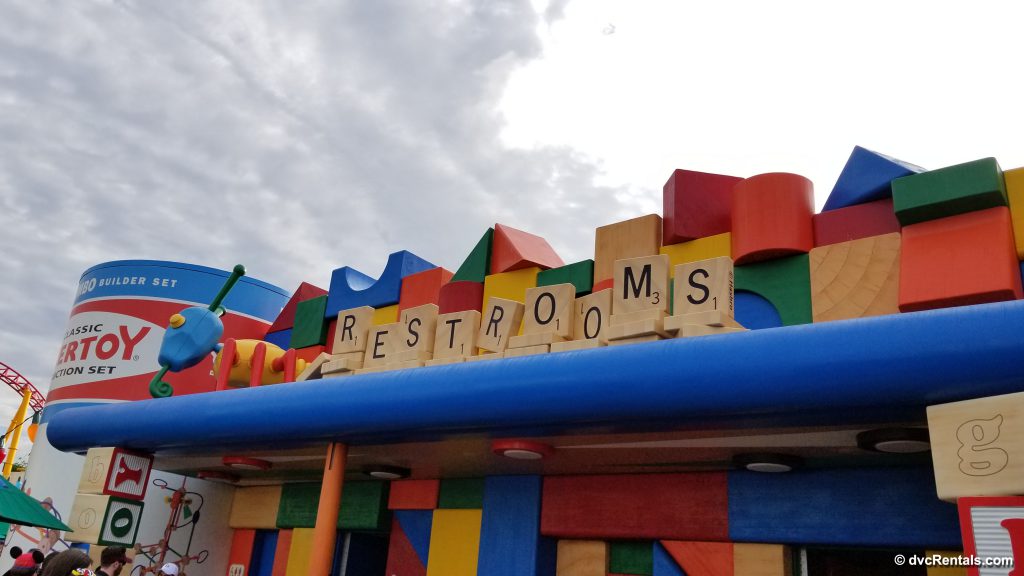 When first walking into this new land guests are given the illusion of being shrunk down to the size of a toy and really feel as though you’re in a child’s backyard. 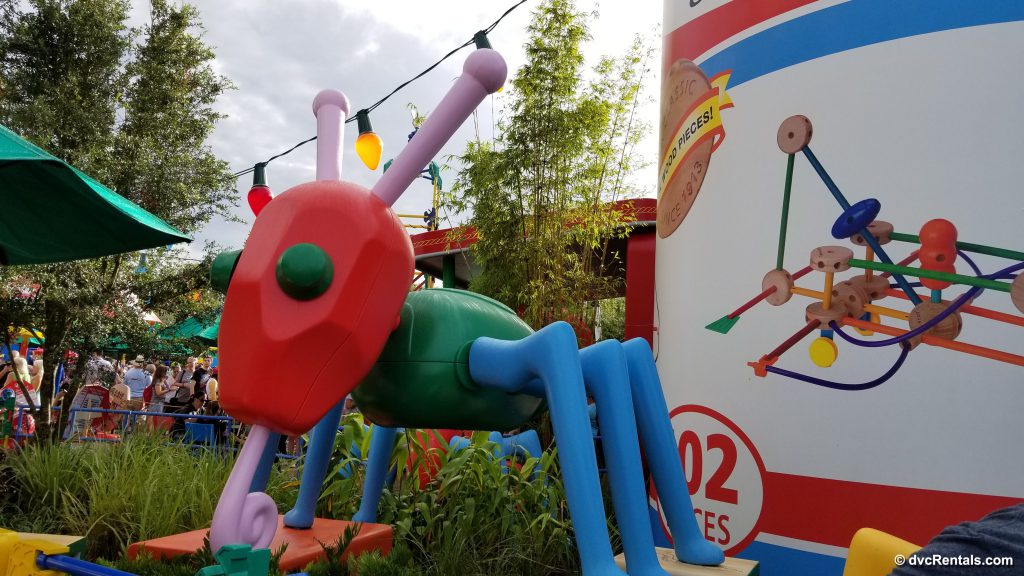 Brightly colored toys of all kinds surround you and comparing their size to my own build of 5 feet 5 inches I immediately felt as though I’m no longer an adult in a theme park; instead, I’m a toy in a massive backyard. 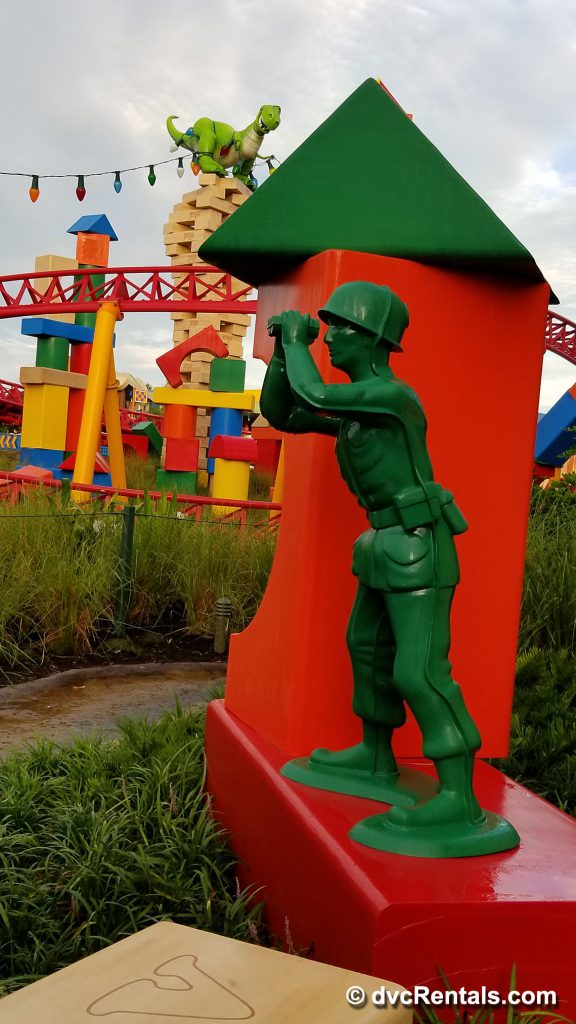 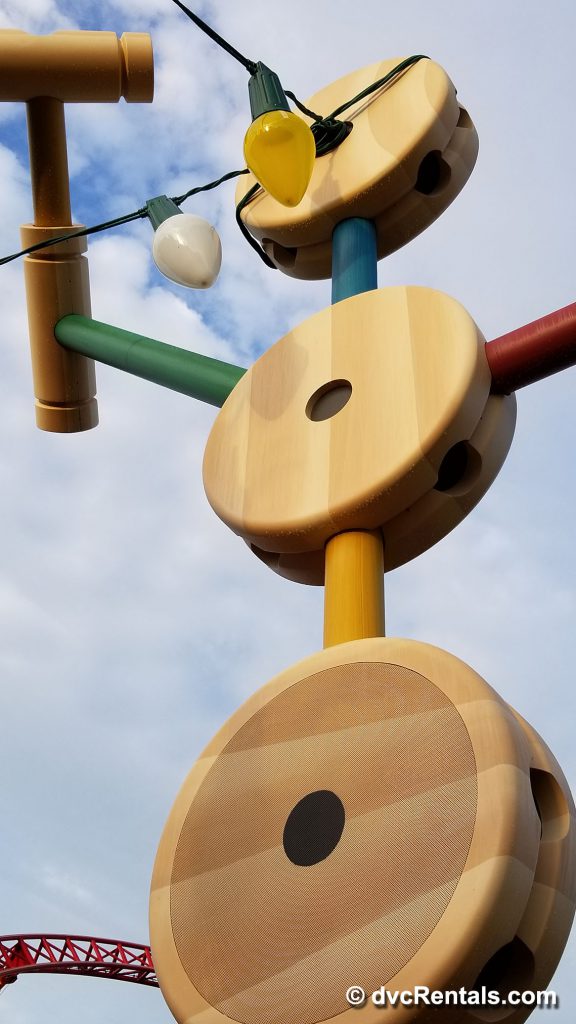 Members of the Green Army Patrol are roaming throughout the area ready to give you marching orders, pose for a picture or sign an autograph. 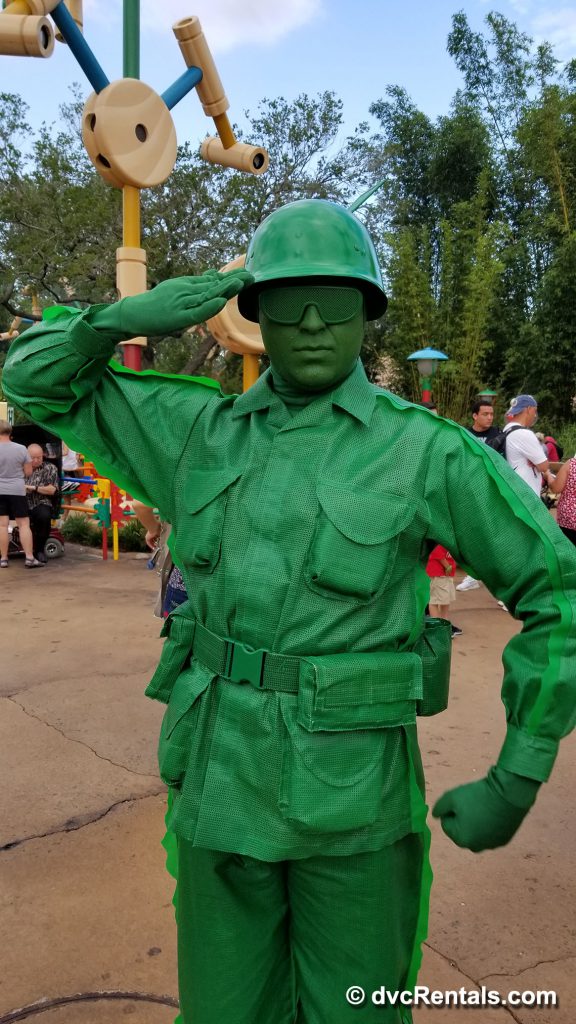 No matter where you look there is something to see!  From the giant bouncy ball with the giant star on it to Andy’s massive footprints throughout the land, Disney very quickly achieved its goal of shrinking guests into toys. 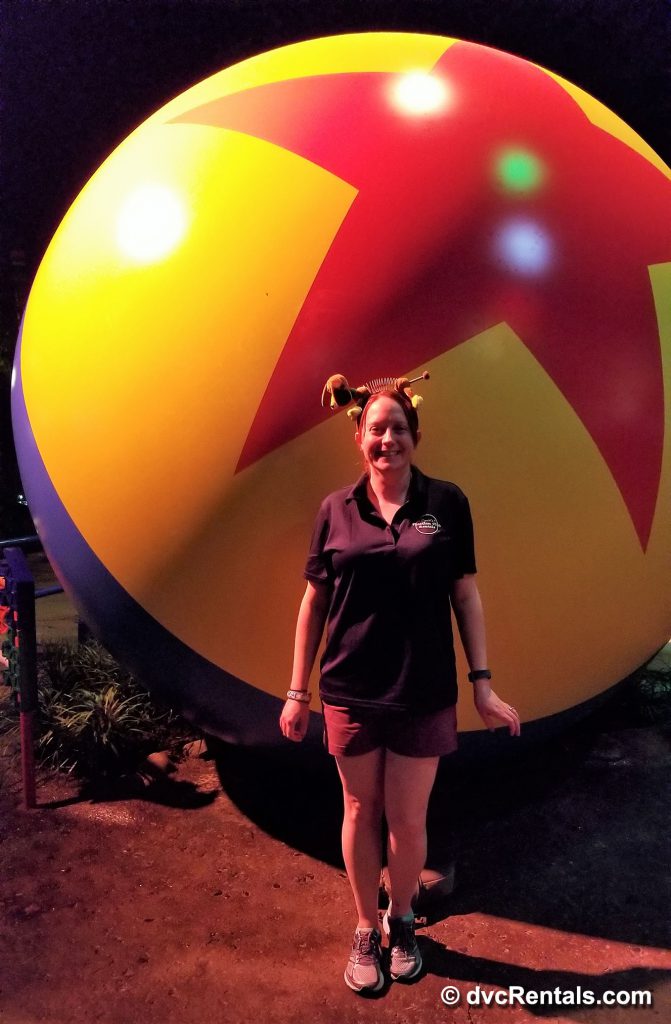 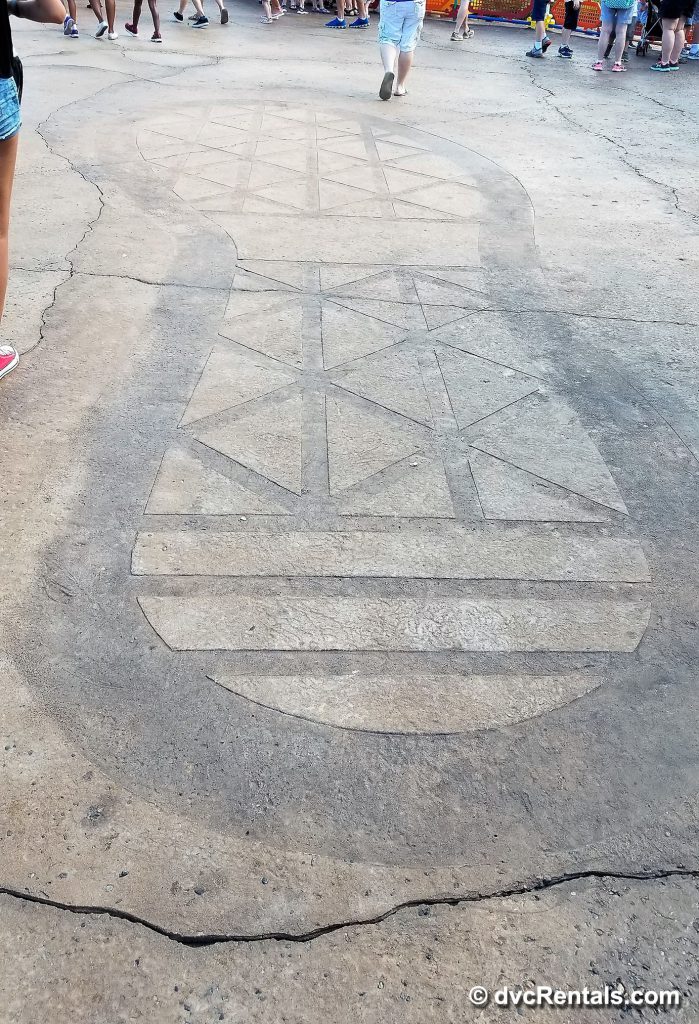 Another great piece of theming that I instantly loved is the new Popsicle Stick Wall! 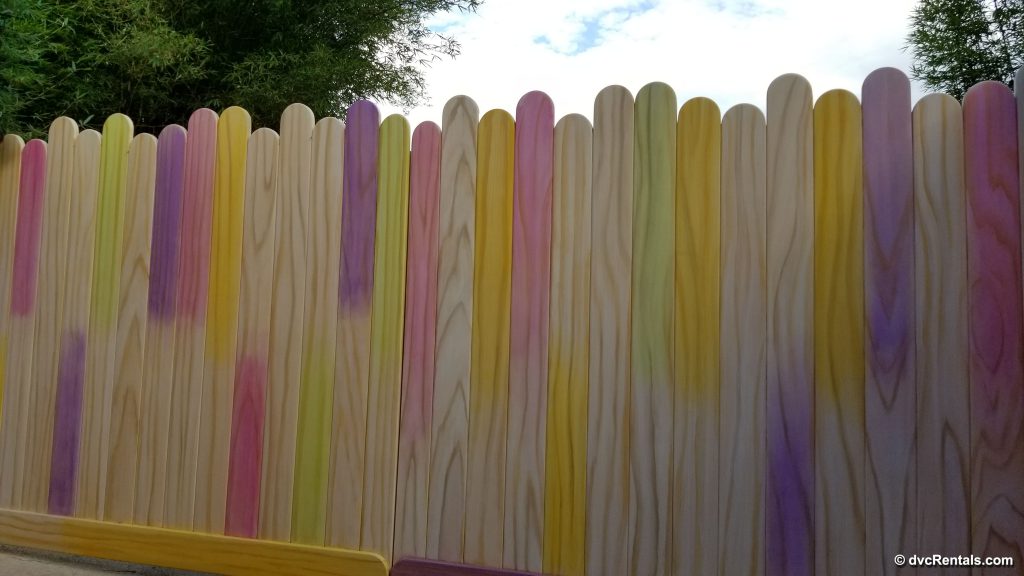 Its location is somewhat hidden within the land yet makes for a great place to snap a picture.  In my opinion, this photo spot could quickly become Disney’s new ‘Purple Wall!’ 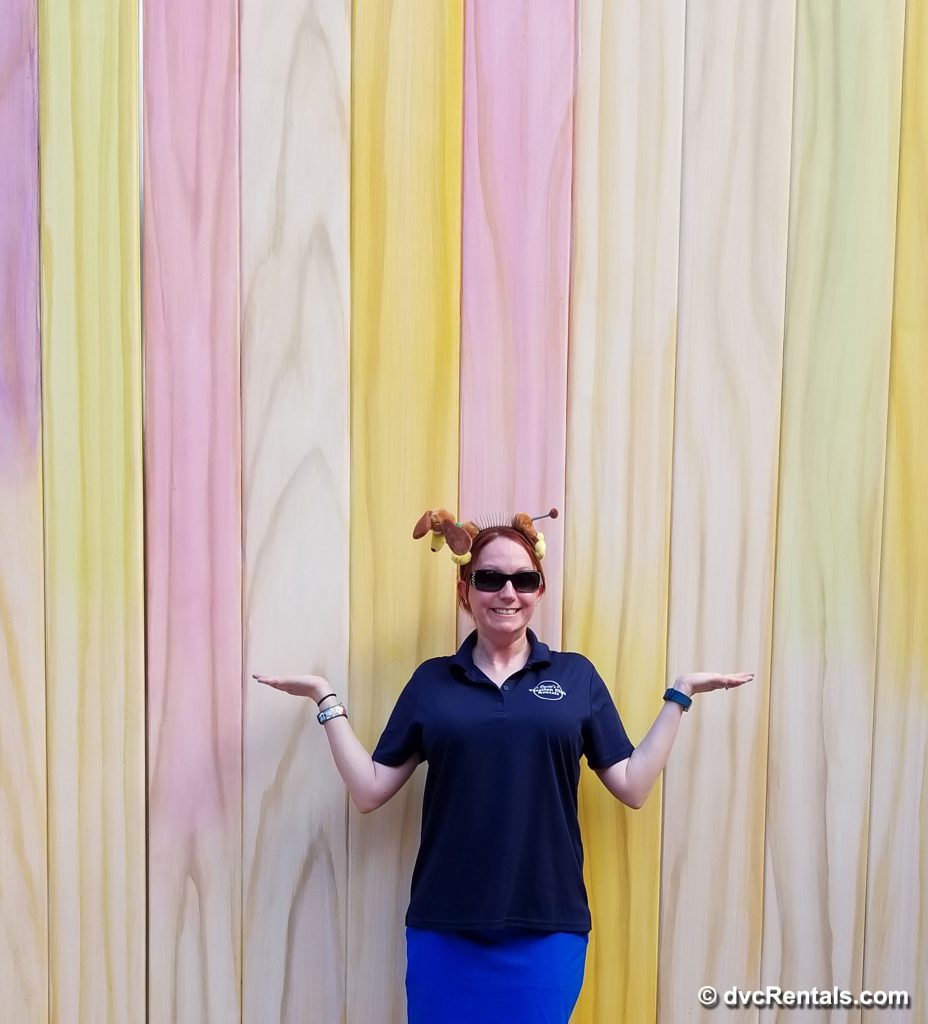 One of the highly anticipated parts of this land is the Slinky Dog Dash Coaster. 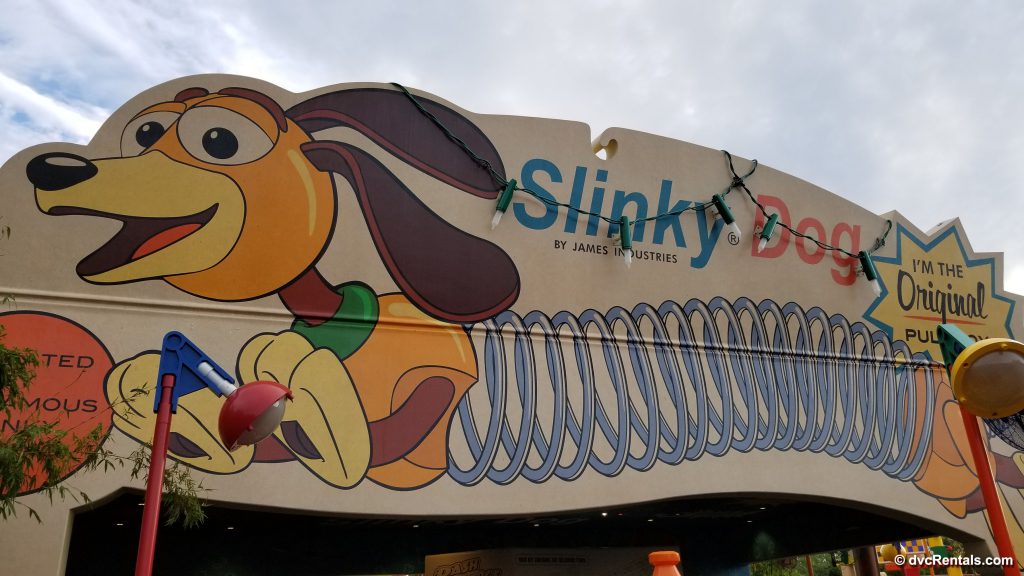 Guests sit 2 people per row and go on an adventure along with Slink as we race around the giant coaster track that Andy has created from his box of Dash & Dodge Mega Coaster Kit! 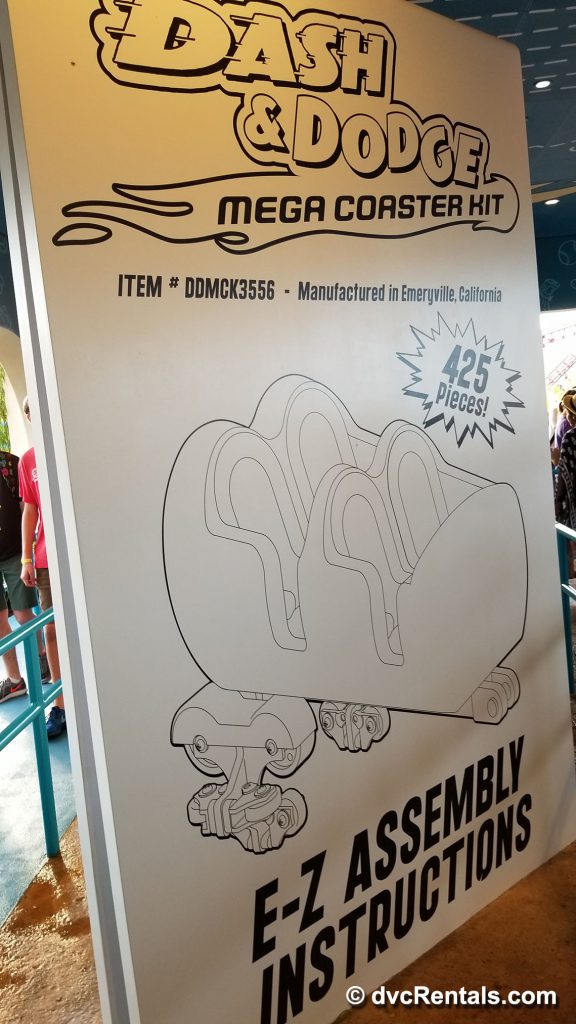 What I really like about this ride, is that it is a medium coaster (so not over the top intense) yet still has a lot of fun dips and twists, making it enjoyable for guests of all ages. 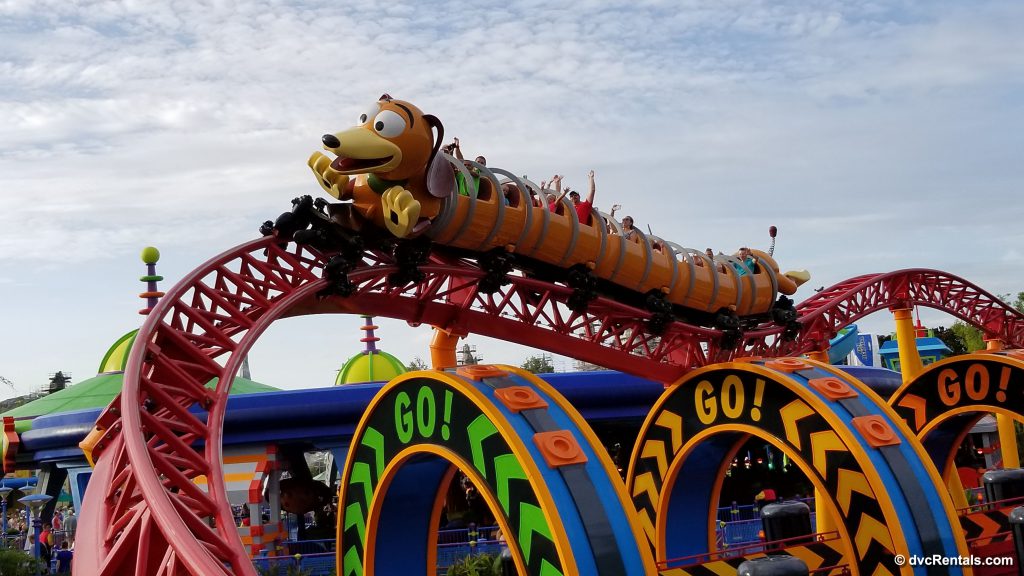 Alien Swirling Saucers is another new attraction within the land, and it caught me by surprise.  Somehow I had imagined it would be a leisurely ride that slowly rotates around (I was thinking Tea Cups without the ability to increase the speed) and boy oh boy was I wrong!  The primary car containing the alien rotates around on a figure-eight track yet in the secondary vehicle you’re swung side to side adding a new level of unexpected fun.  For the guests that were near me, they would have been serenaded by a storm of giggles. 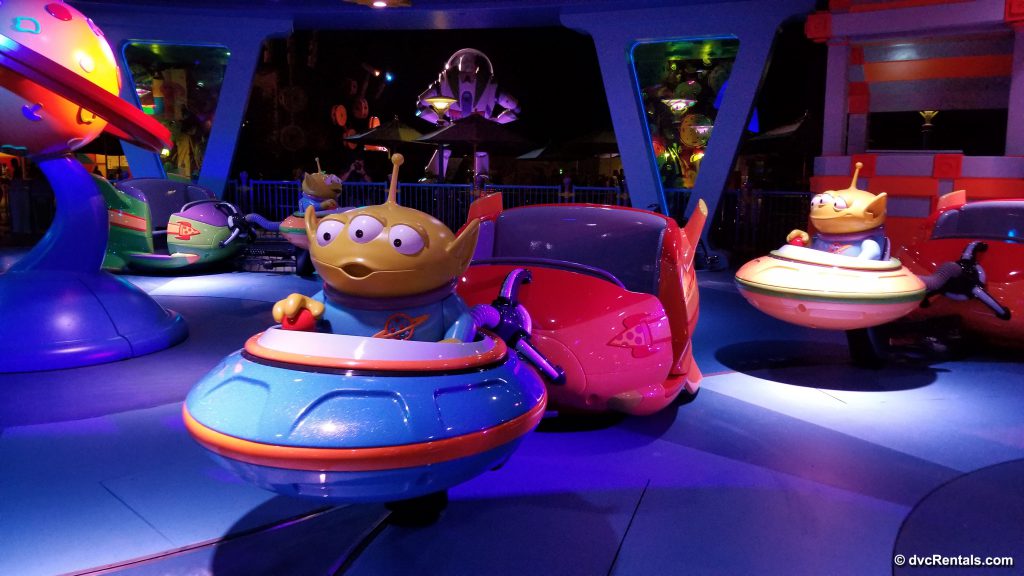 Woody’s Lunch Box is a new quick service option which also fits perfectly within the theme of the land.  After having the opportunity to dine here, I realized that there is so much to discuss that it would be too long for today’s blog; so stay tuned an entire blog dedicated to this restaurant will be coming soon! 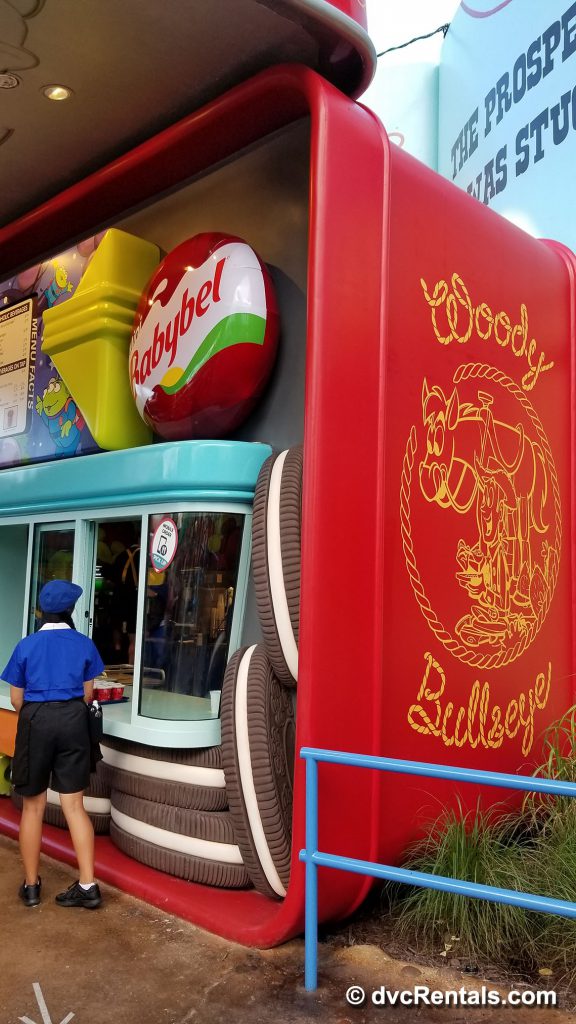 When looking back at the opening day, it was a fantastic experience, and there are 4 recommendations that I’ve created for anyone who would like to be part of an opening day celebration.

The park was set to open at 8:00am, so I had planned to arrive by 6:00 and expected to be waiting in line at the entrance.  Some guests had shown up hours upon hours before me!  A pleasant surprise is that Disney chose to open the land at 6:00am allowing those of us who were already there a chance to begin exploring even earlier then we had expected.  By arriving early, I was able to explore the area before the crowds reached capacity (making it much more enjoyable than later in the day).  At 10:00am the number of guests who were eager to see the land had exceeded capacity and Disney had to begin lines to limit the number of guests in the land.  A queue was formed at the top of Hollywood Boulevard just behind Center Stage for guests to wait.  As other guests would leave the area, Toy Story Land Cast Members would then escort new guests into TSL so they could begin their adventure in the new land. 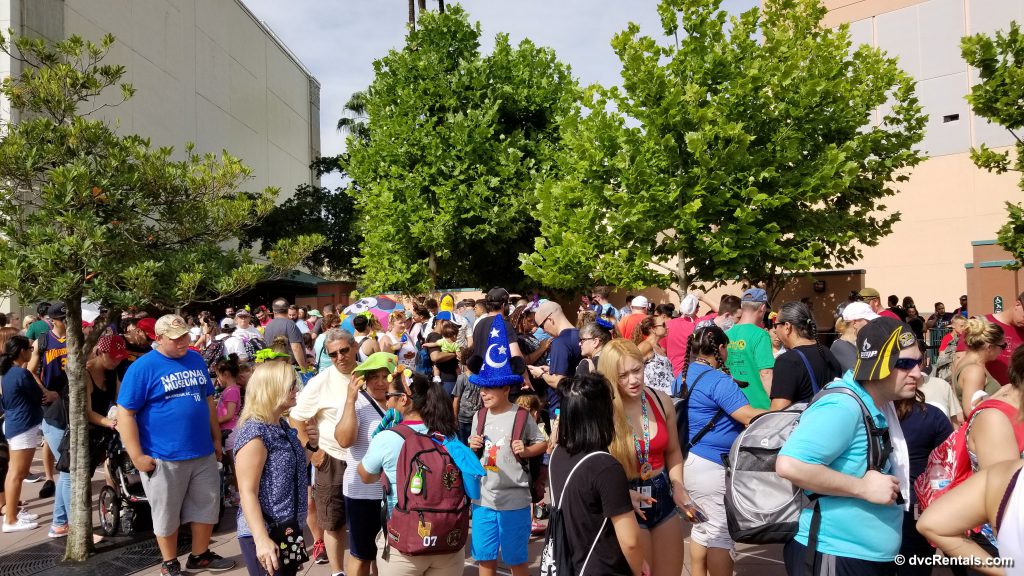 Another way Disney worked to inform guests about the crowd levels was sending out an update through the My Disney Experience app.  For those of us at Disney’s Hollywood Studios, our My Disney Experience App would display a message giving the estimated wait time to enter the land.  I believe having this increased level of communication from Disney was helpful in managing expectations for wait times.

The great bonus about having arrived early is that as the day got hotter and the crowd levels increased, I was ready to head out of the land.  By 11:00am I had explored the new areas, taken countless photos, been on 2 of the 3 attractions and was ready to head back to the resort for a mid-day break.

The restaurant and snack/drink carts were open, yet I found it helpful to already have snacks with me.  As I made my way through the Slinky Dog Dash line, I was able to stay hydrated and fill my tummy with food, which helped to pass the time.  Having arrived at the park so early in the morning, I had bought my snacks from the resort shop the night before and brought them with me.

As the crowd levels continued to grow, the lines for food also increased making me even happier in my choice to have my snacks within arms reach and avoid spending time in the lines for food.   As mentioned above I was eager to dine at Woody’s Lunch Box, yet for me, I didn’t want to spend time on opening day waiting in line for food; I’d rather continue exploring the land and seeing all that it had to offer.

Part of being at Disney on an opening day is knowing that there will be wait times.  Yes, I was able to minimalize the wait times on some things, such as choosing to bring food and arriving early before the land reached capacity, yet I also started the day with the expectation that there will be lines.  No matter what I was doing; be it meeting a beloved character, wanting to try a new ride, or buying some merchandise, I decided to keep that idea in the forefront of my mind and always gave myself extra time. 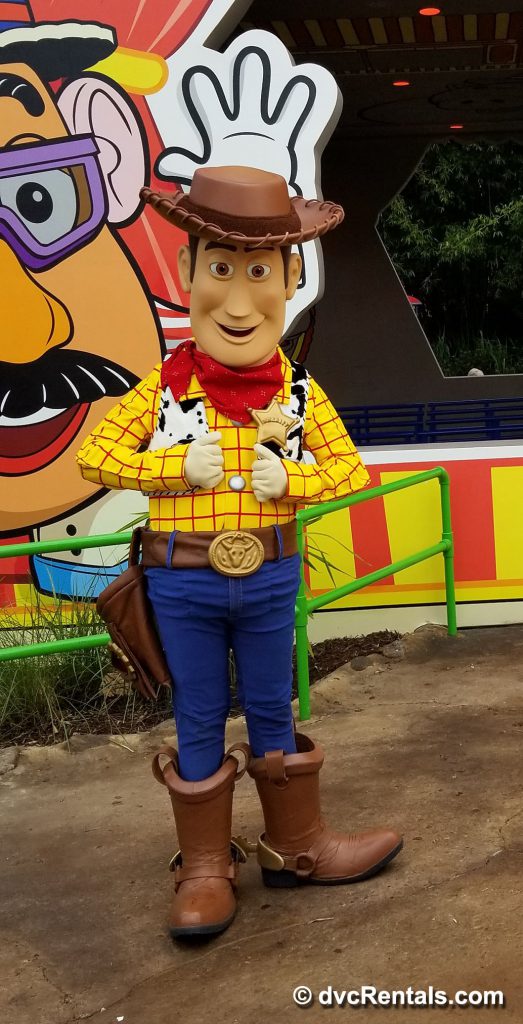 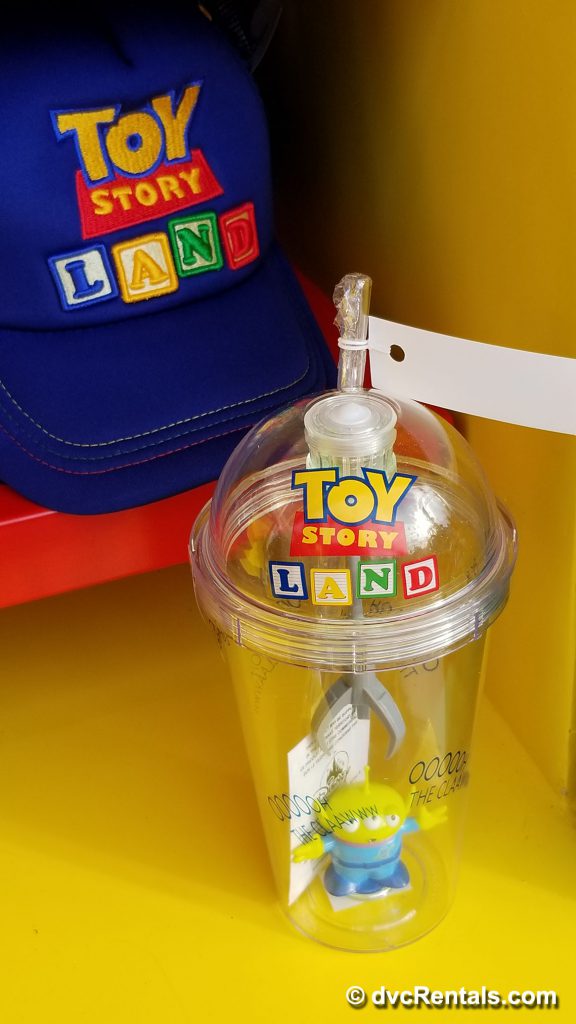 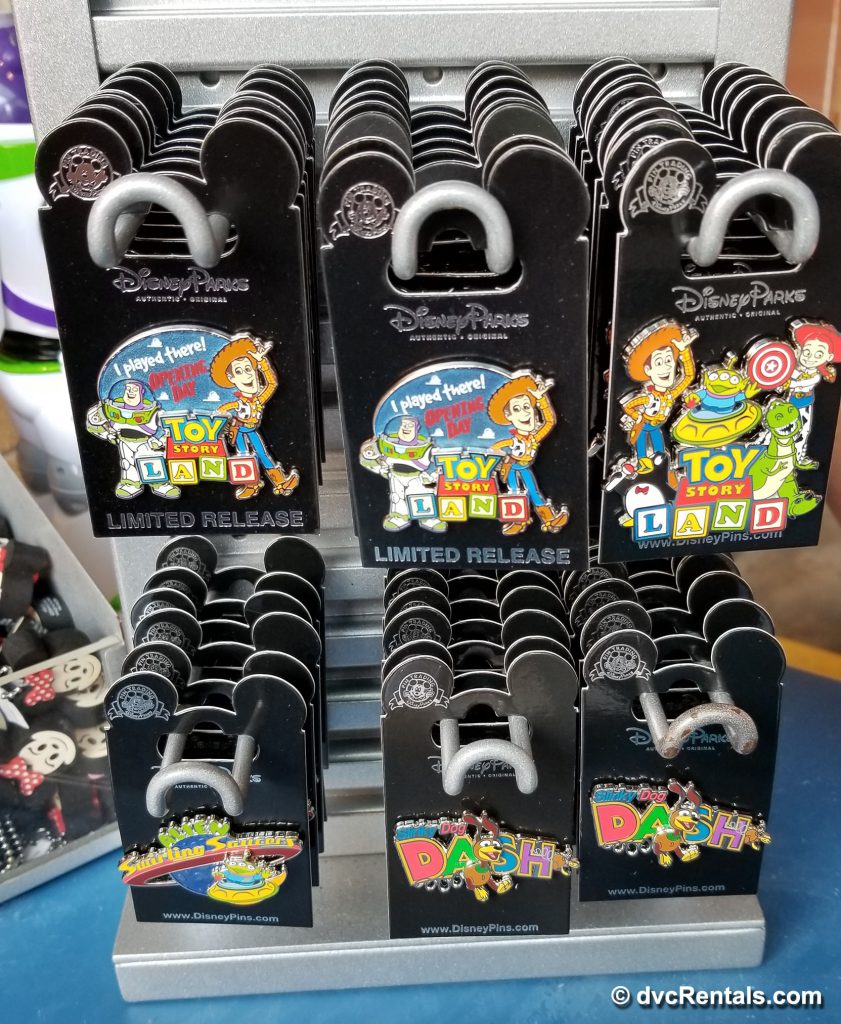 And last but not least…

Opening day celebrations are filled with magic.  The energy in the air from fellow guests and Cast Members fuelled my excitement, and it truly was a magical day! 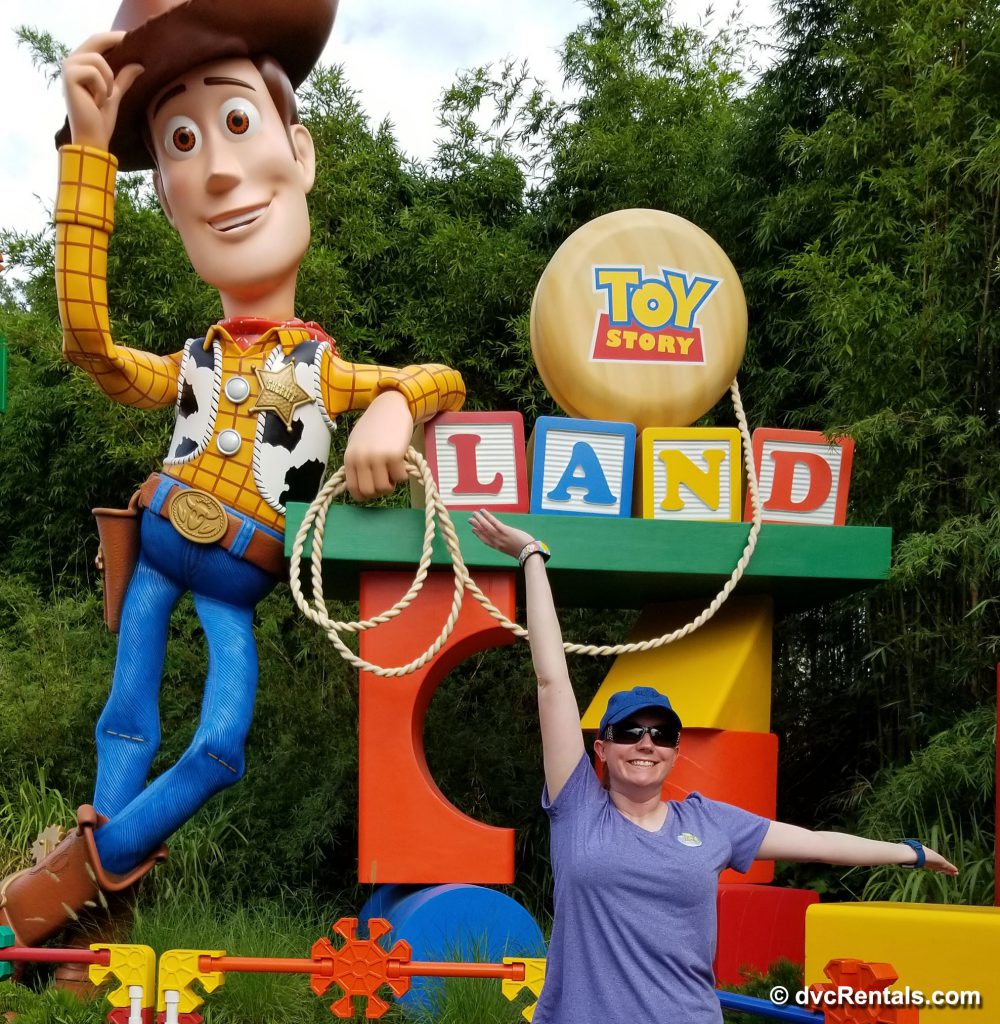 Disney has a special place in my heart, and for me, Toy Story is a reminder of the magical moments from childhood when I was like Andy.  My toys were prize possessions and each day would be a new adventure.

When it comes to Toy Story Land, I think Disney has done an amazing job!  This immersive land makes me feel like I really am a member of Andy’s toys prepared to go on an adventure, and ready to travel “to infinity and beyond!” 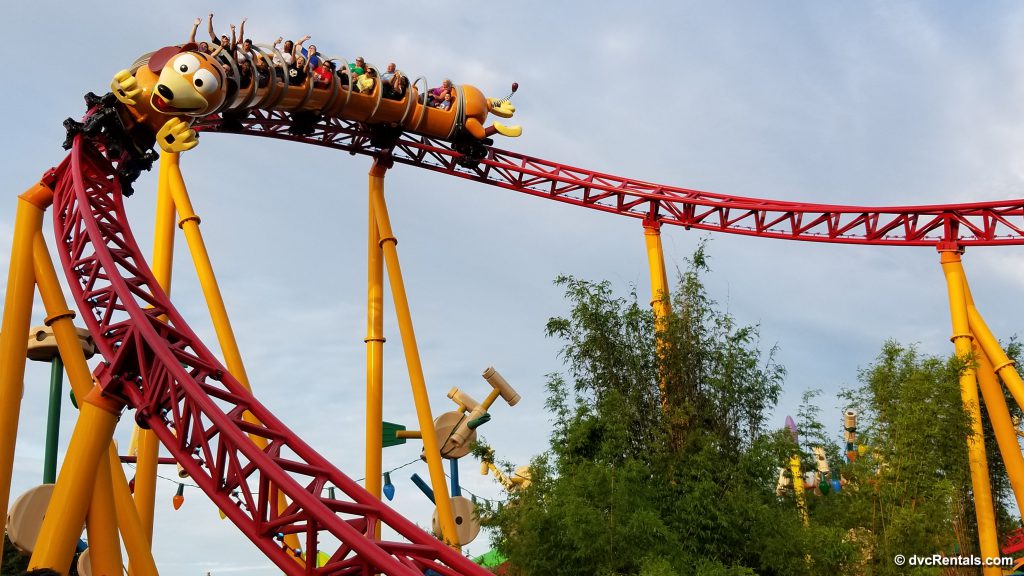