A Look at a Studio at Disney’s Vero Beach

In addition to seven beautiful resorts (soon to be eight!) on the Walt Disney World property, Disney Vacation Club has four other fantastic resorts – Aulani, A Disney Resort & Spa in Ko Olina; The Villas at Disney’s Grand Californian Hotel & Spa; Disney’s Hilton Head Island Resort; and Disney’s Vero Beach Resort. It’s on my bucket list to stay at each and every one of them at least once. This spring I took a road trip and was able to check Vero Beach and Hilton Head off my list. Of course, I took tons of pictures while I was there. Today I’m giving you a tour of my room at Vero Beach.

Since this was my first stay at Vero Beach, I’m not sure, but I think my room had an unusual layout. You’ll see what I mean in a minute. The first thing I came upon when I walked into the room was the kitchenette on my right. 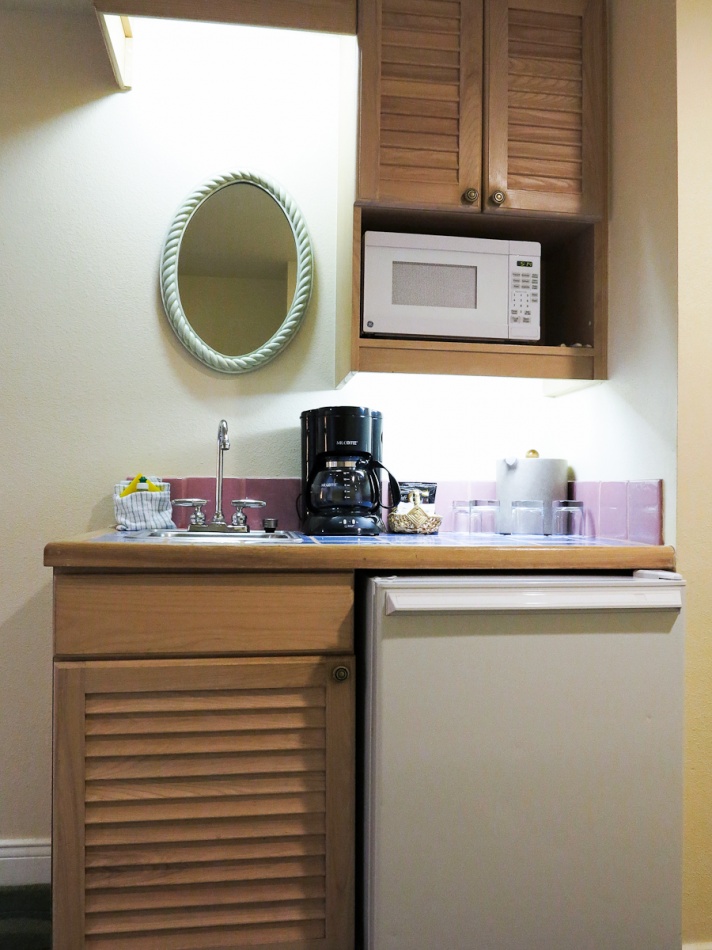 The kitchenette was pretty much the same as the ones in the rooms at Walt Disney World. It had small sink and a full-size coffee maker. 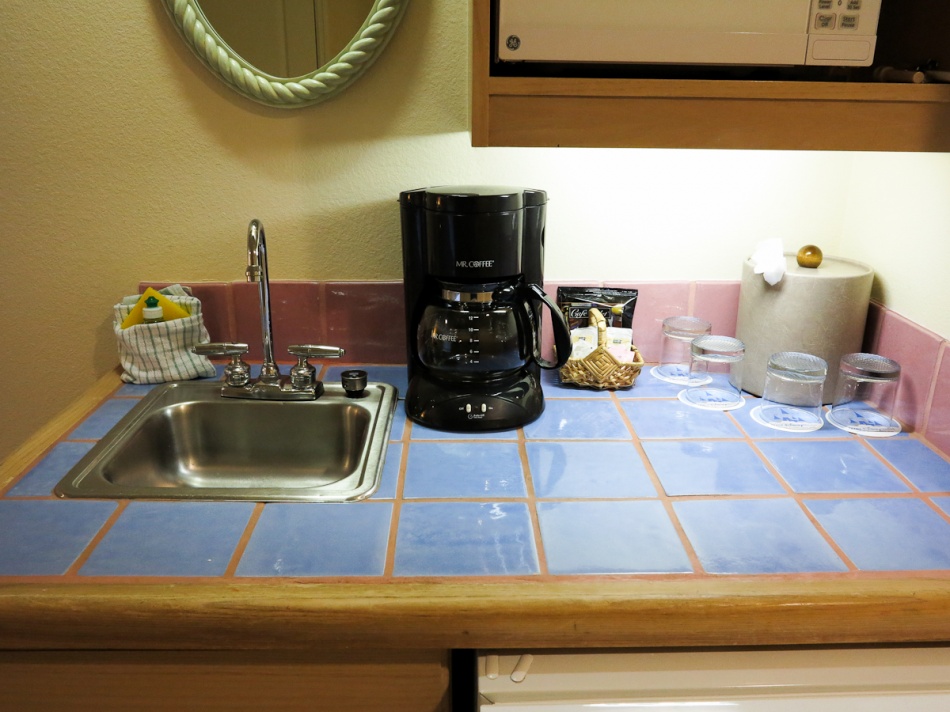 Above the sink was a microwave and toaster. 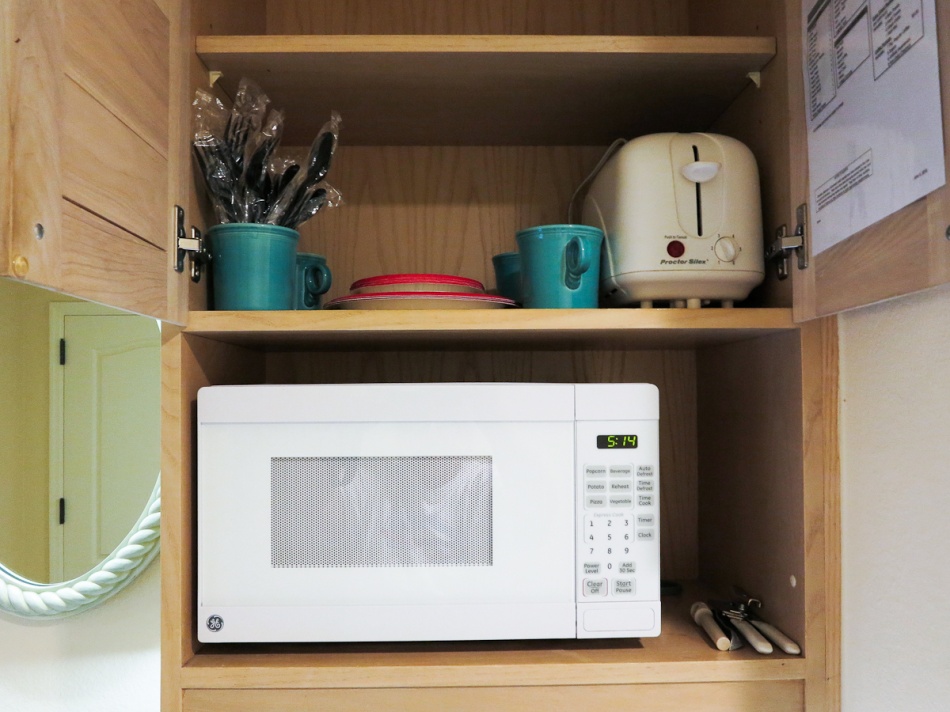 The space below the counter housed the fridge. 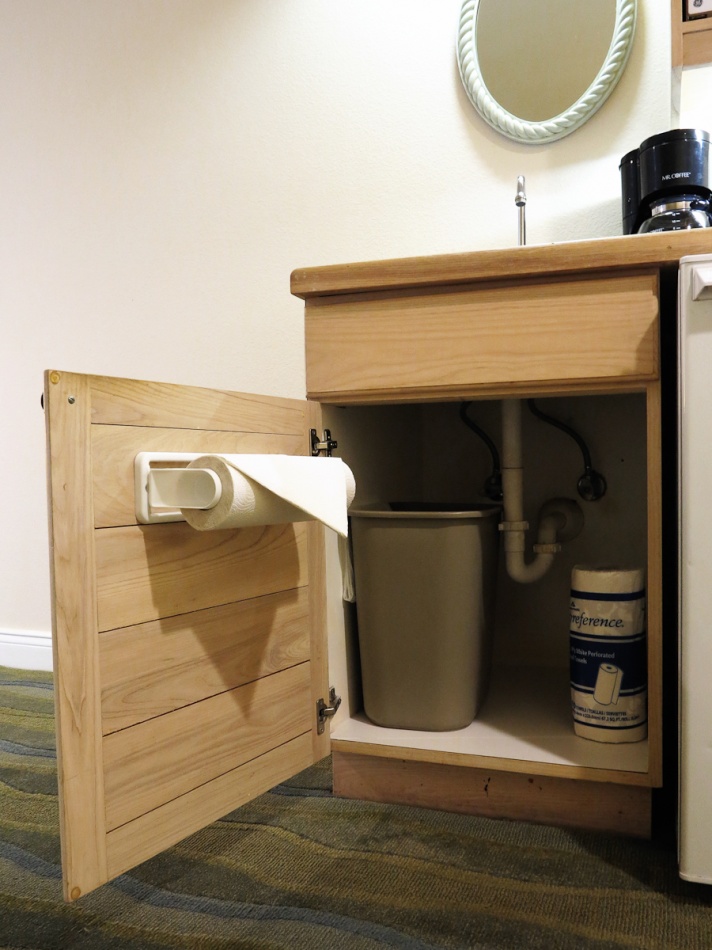 Here’s where things stray from the typical DVC studio layout. This studio actually had two rooms. The kitchenette was in a large, fairly empty room with nothing else but a chair and lamp. Although it seemed a bit odd at first, it was pretty cool to have all that space in a studio. Like I said, I’m pretty certain they are not all like this. 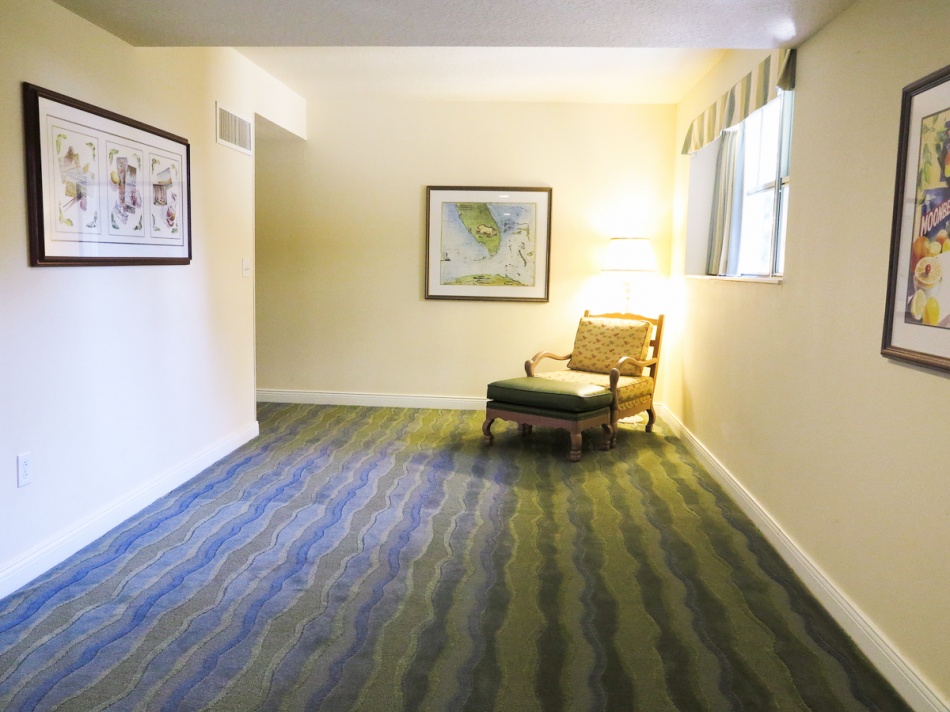 This next picture is looking back towards the door and kitchenette. You can’t see the door in this photo but it’s on the wall to the left of the kitchenette. There was also a connecting door to the room next door straight across from the kitchenette. I kept thinking what a great play space this would make for kids. 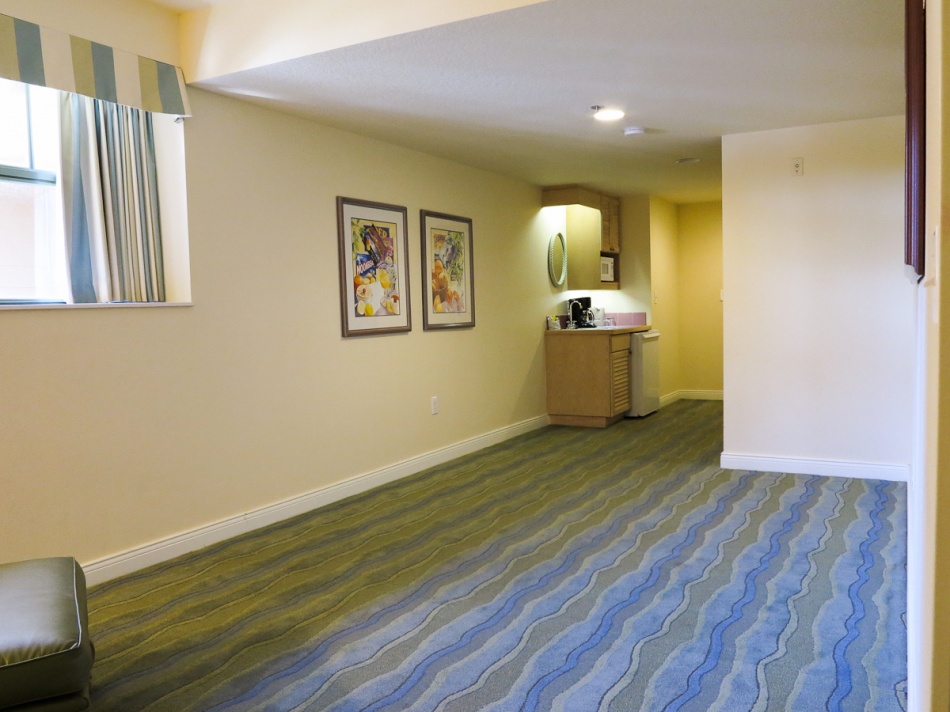 Around the corner I found the closet on my left. 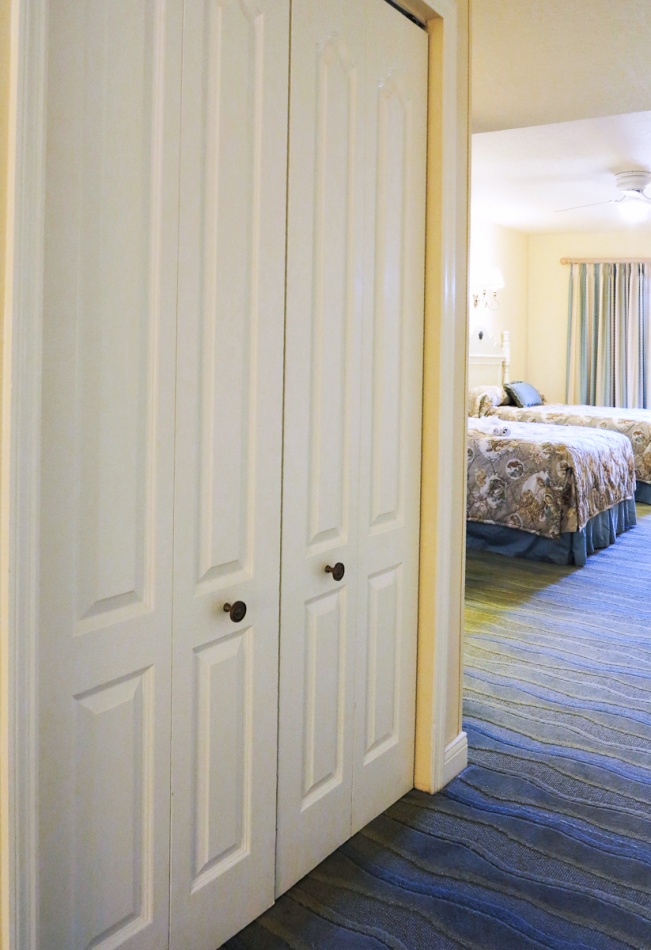 Inside was an ironing board, iron, and fire extinguisher.

I also found a safe, a pack ‘n play crib, and an extra pillow and blanket. 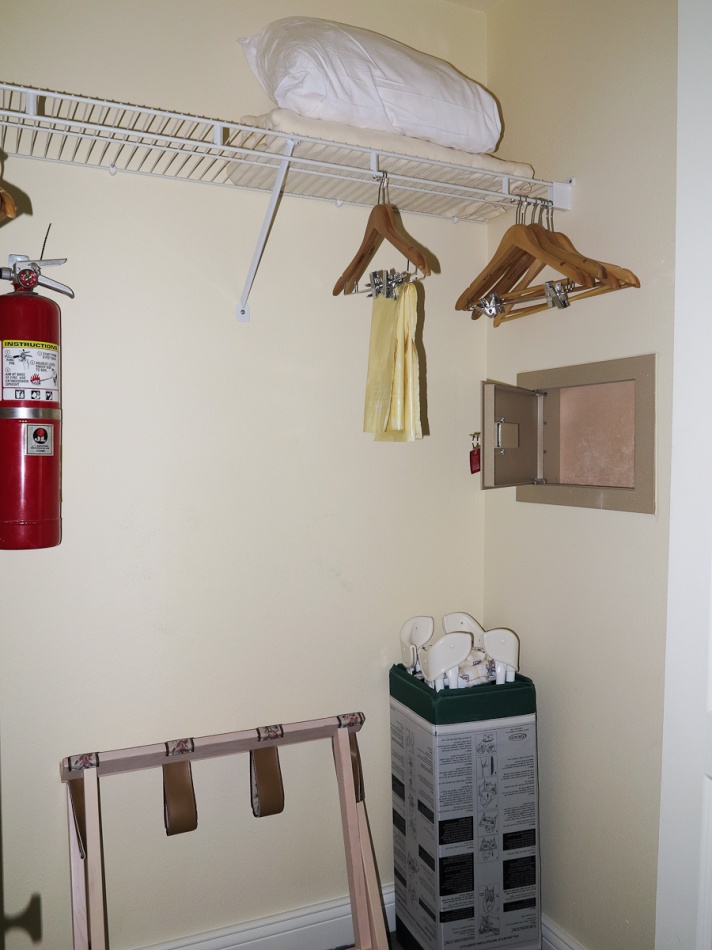 Just past the closet was the rest of my room. It was very nice. Even though I wasn’t at Walt Disney World, the room had that familiar DVC feel. The pale yellow and blue decor was very sweet and relaxing. There was a real comfortable, beachy vibe. 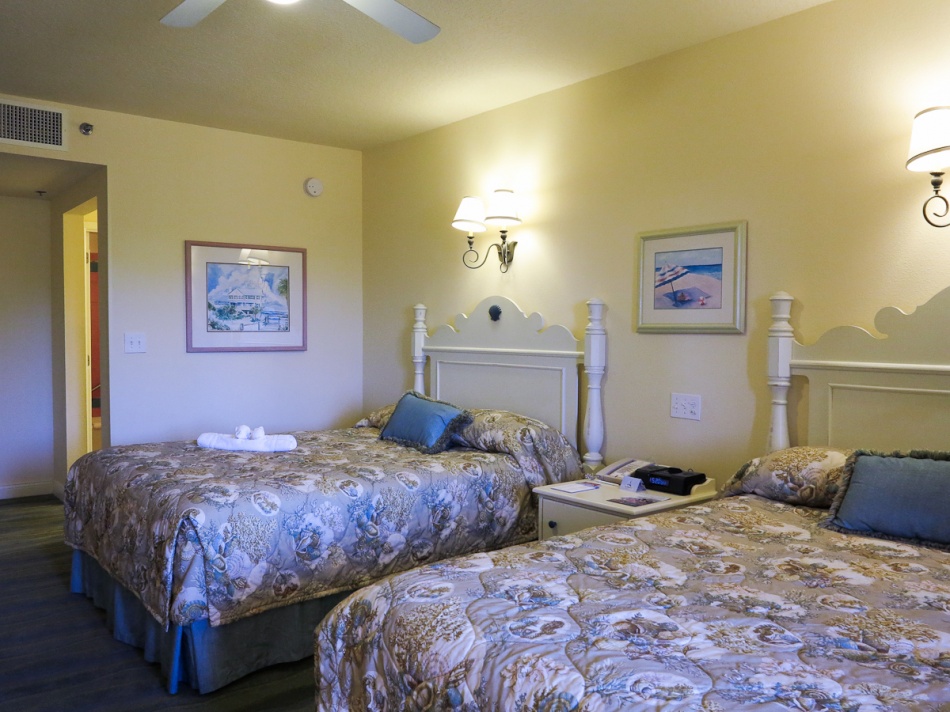 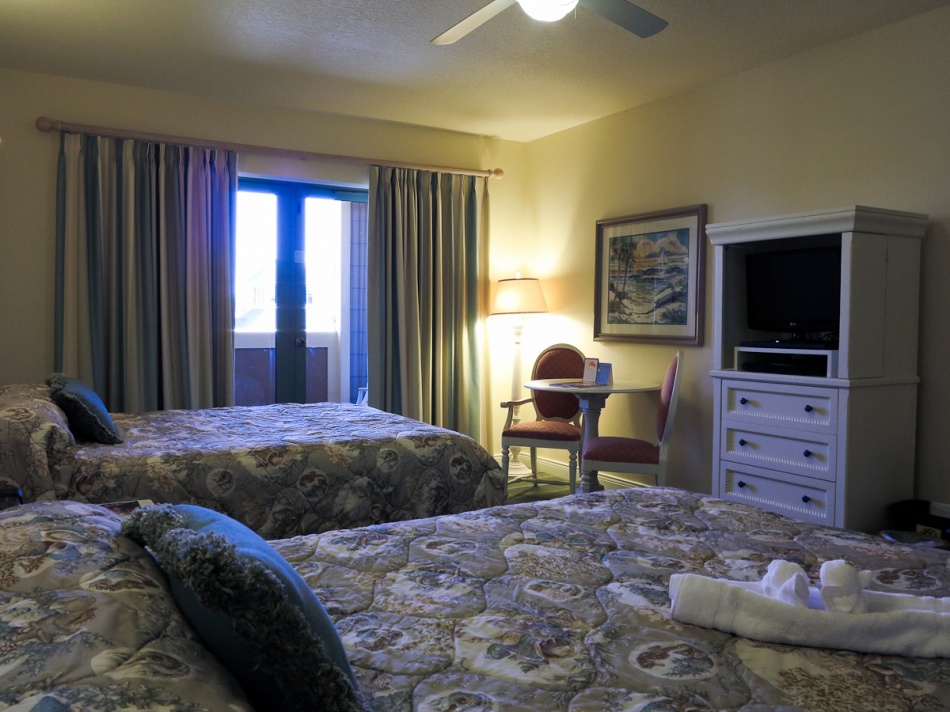 At the end of one of the beds was a table with two chairs. 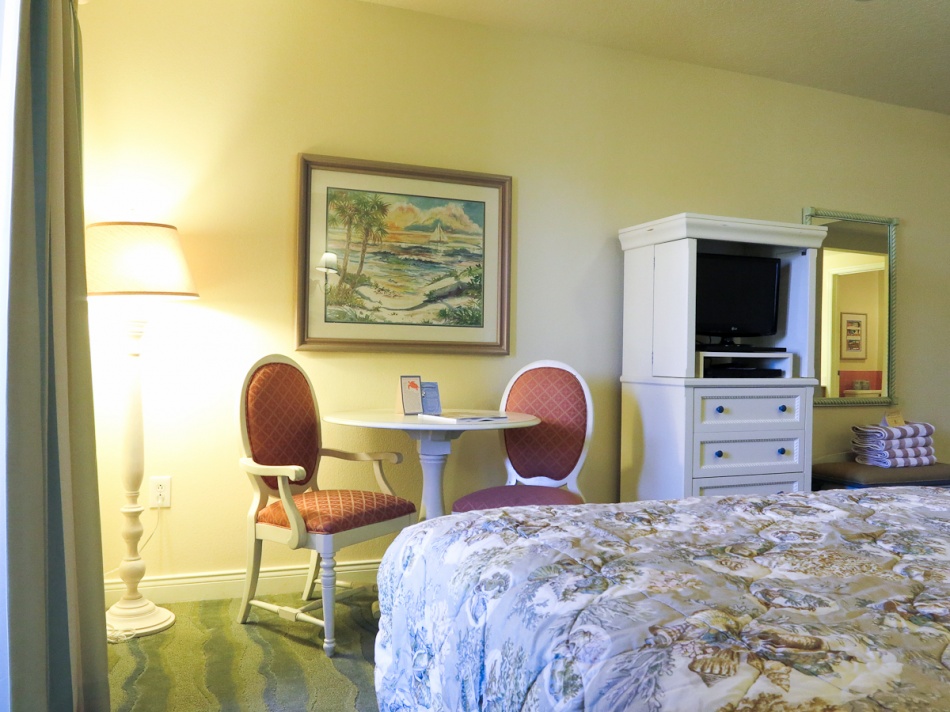 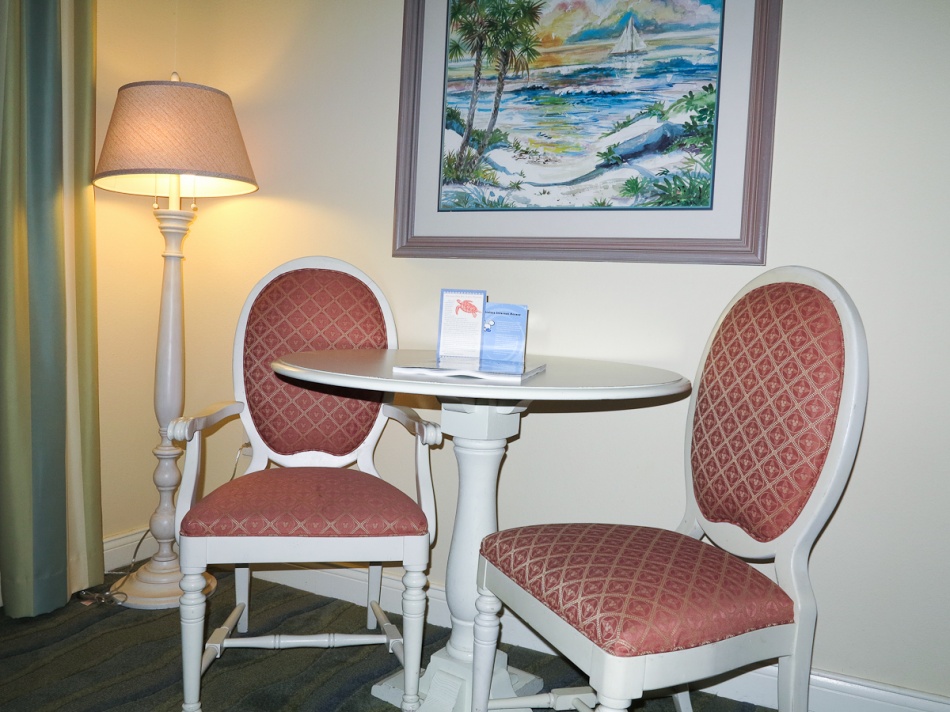 There was quite a bit of storage space with drawers below the TV, in the nightstand and in the bench next to the TV. 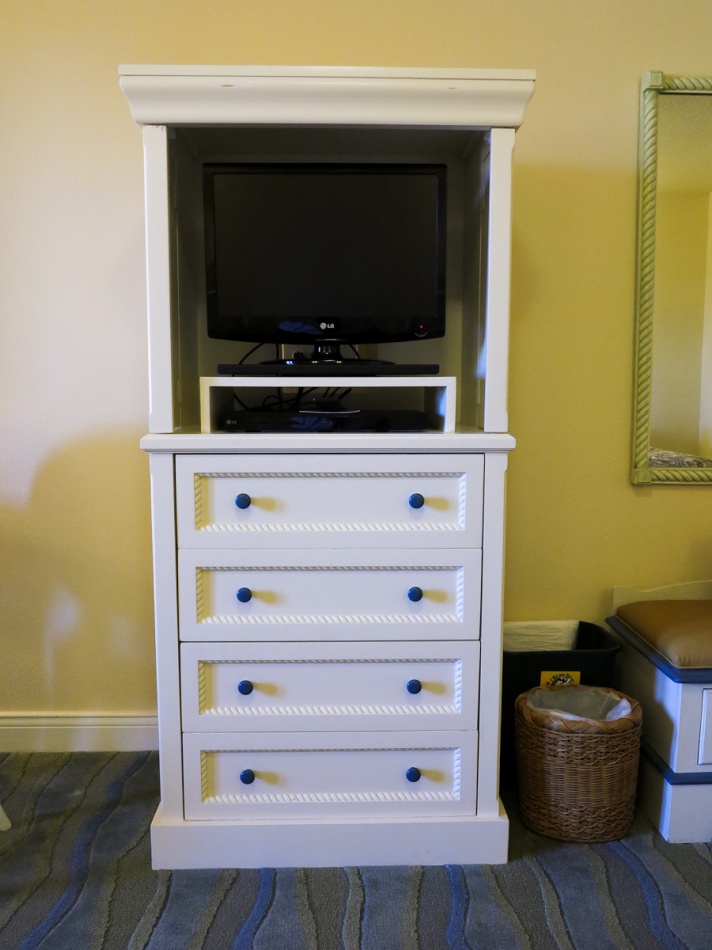 The TV was a little smaller than the ones I’ve seen in other DVC rooms. I suppose they figure you won’t be spending much time in the room with the Atlantic Ocean right outside! 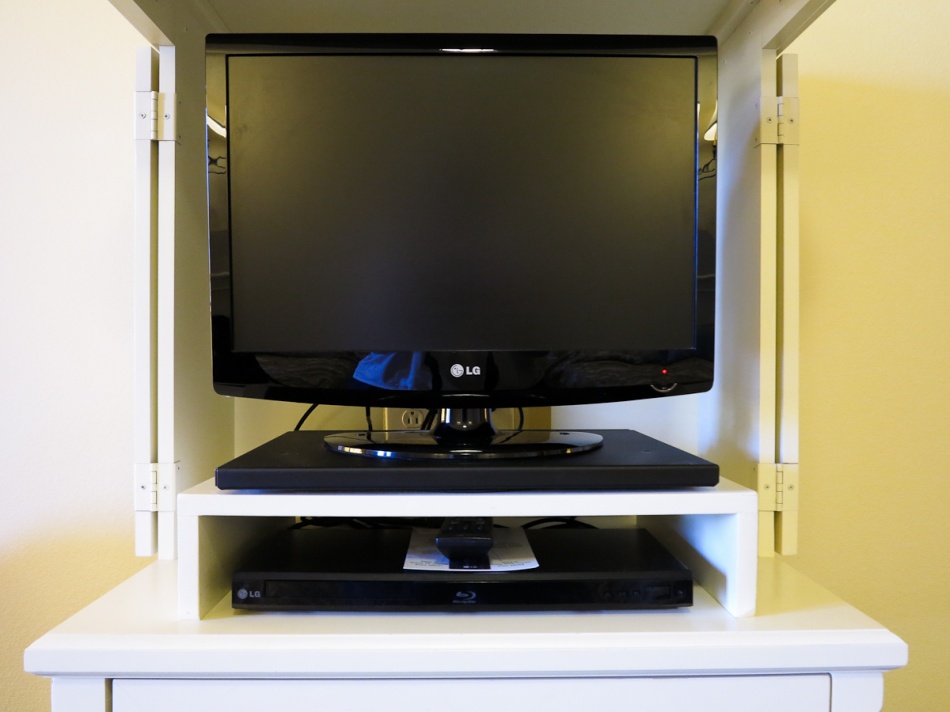 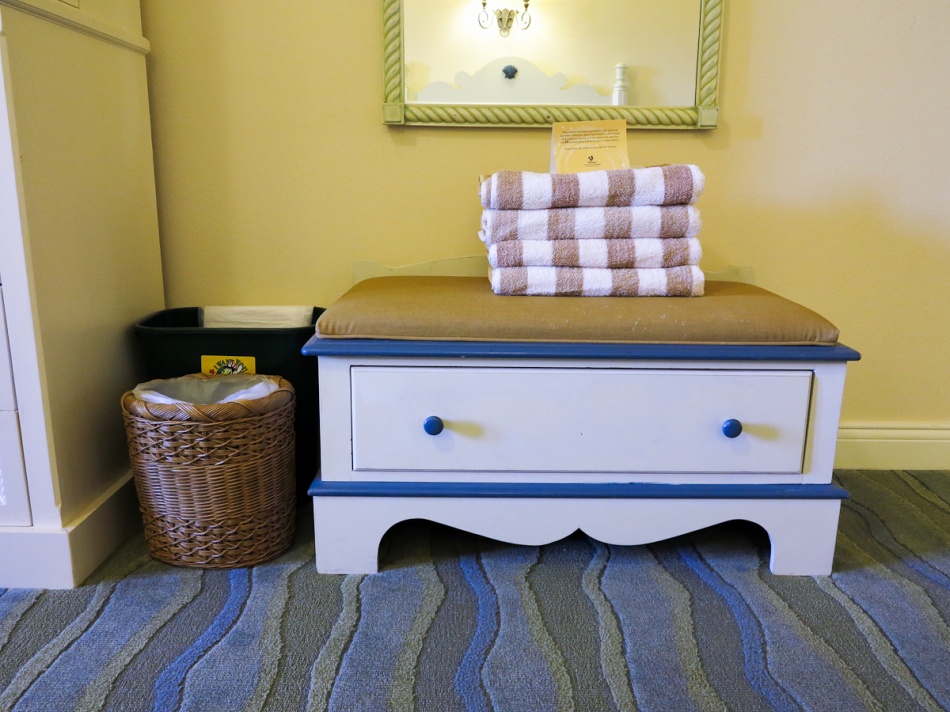 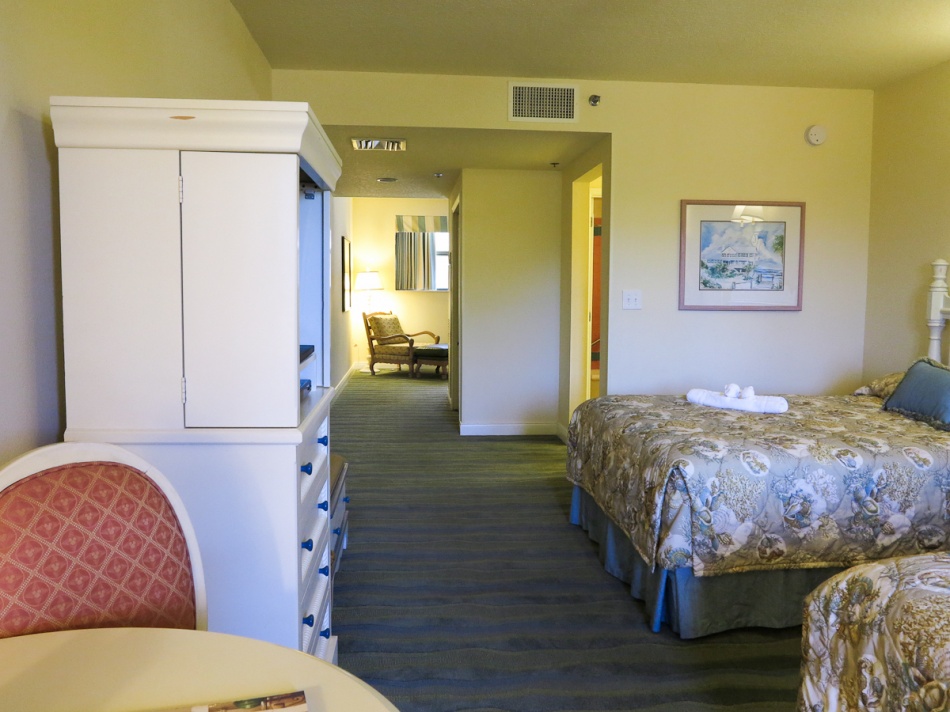 The bathroom sink was outside of the bathroom, which I really like. There was a hair dryer in the cupboard below the sink. 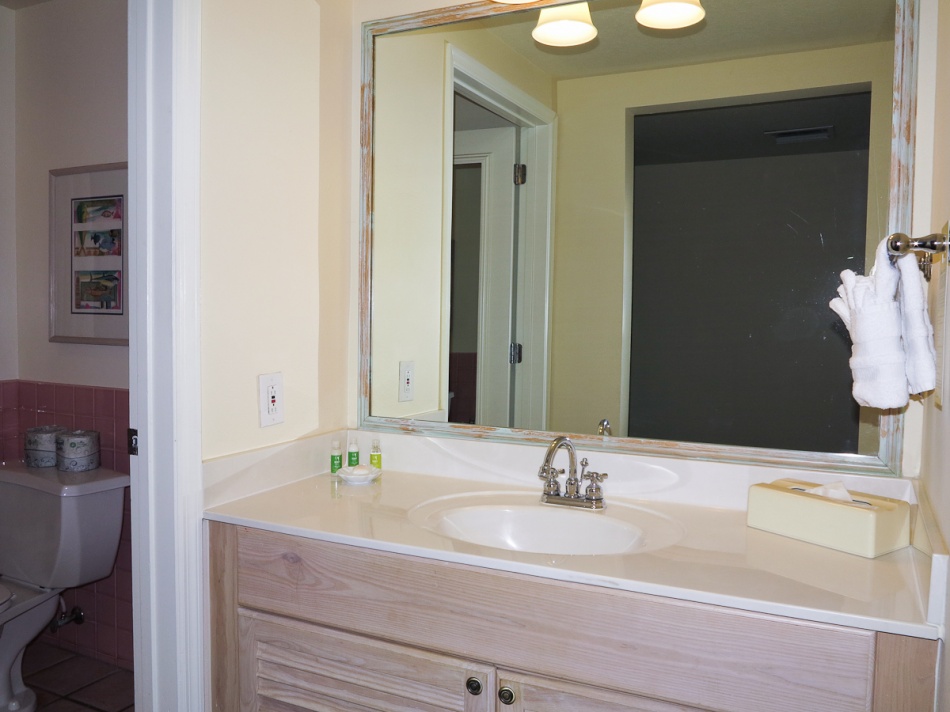 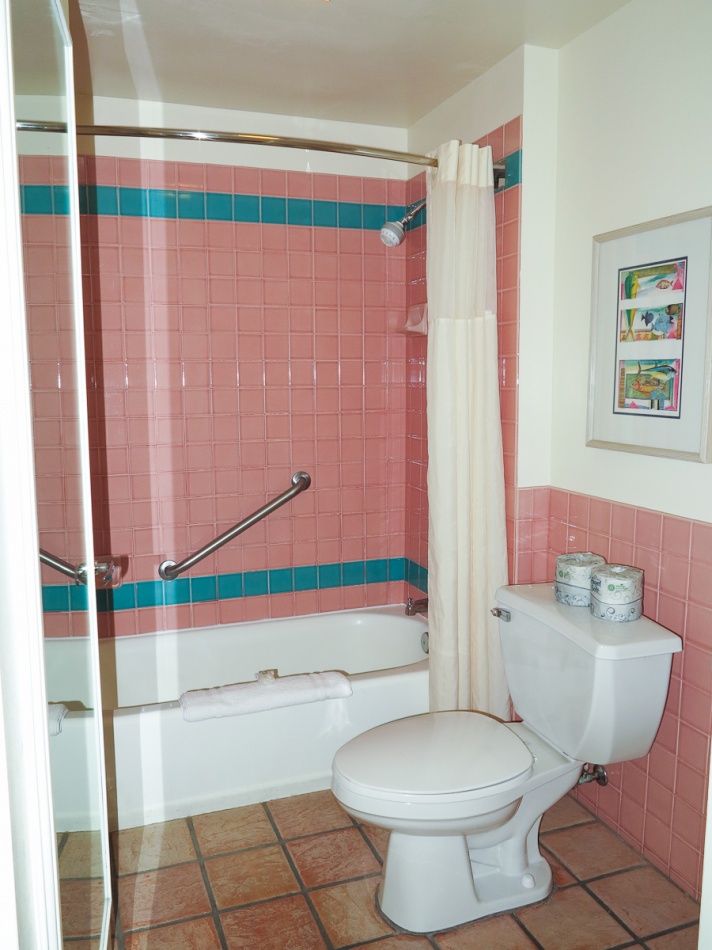 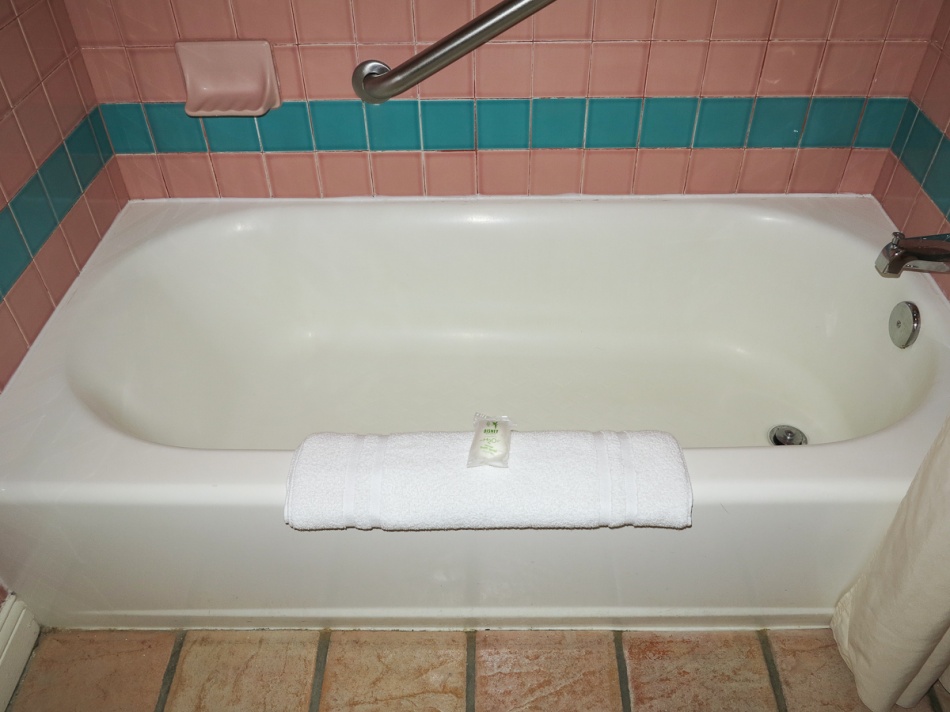 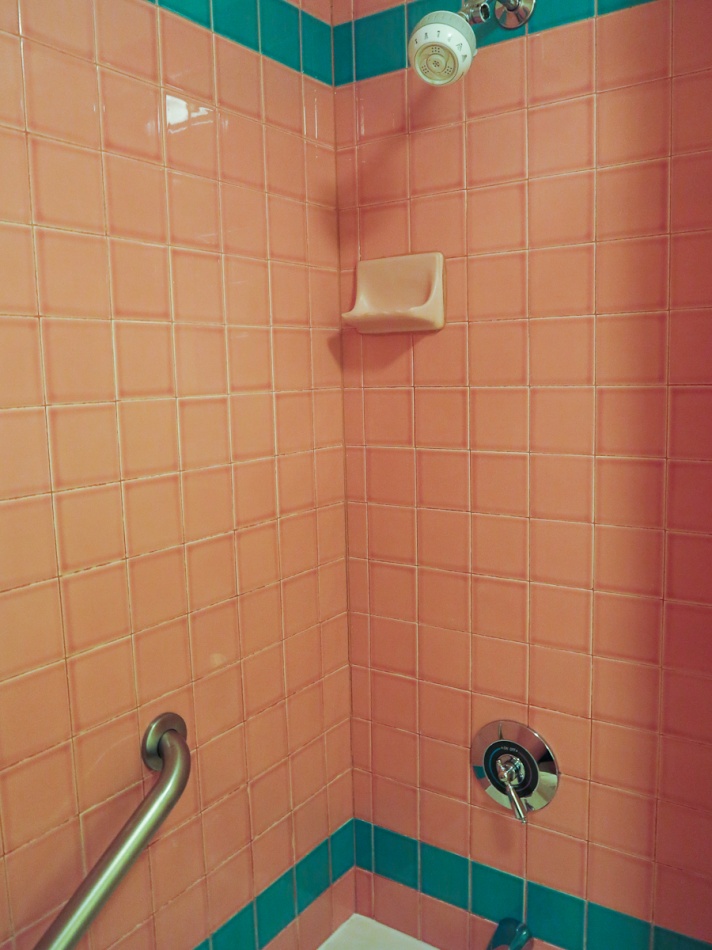 Out on the patio were two chairs and a small table. Even though I had a standard view, if I stood on my toes, I could actually see a little bit of the pool. The patio was very private – no one could see onto it. 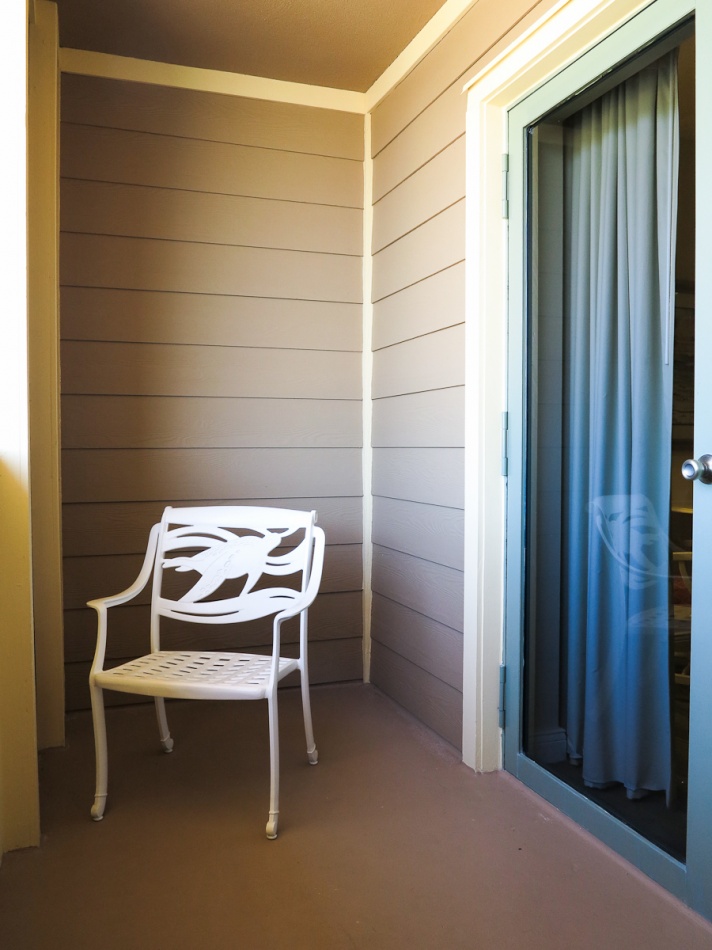 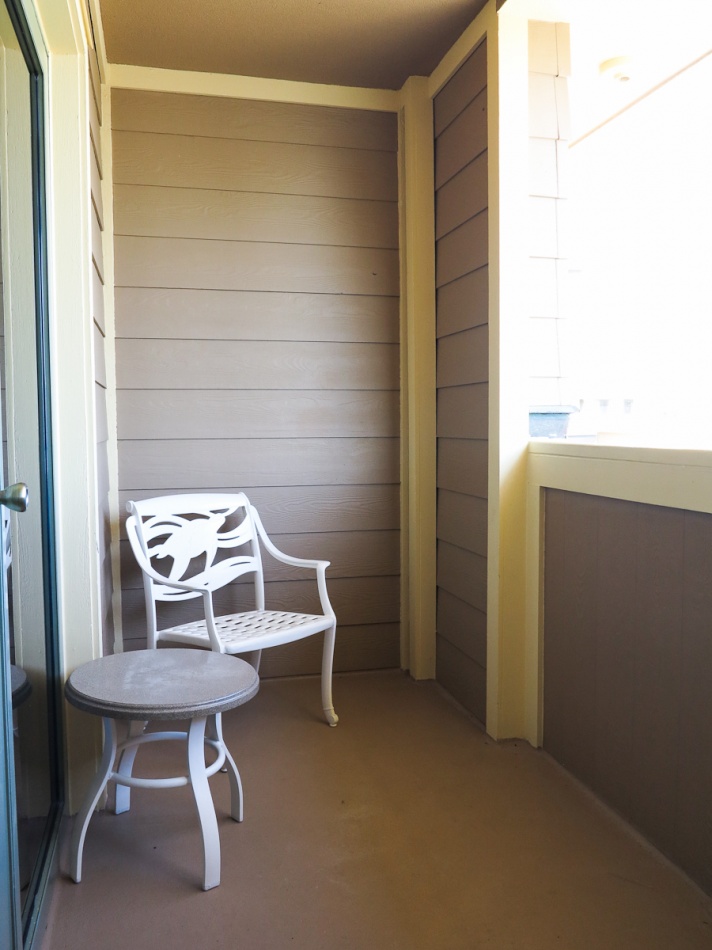 I liked this Studio at Disney’s Vero Beach quite a bit. Although I was no where near Walt Disney World, it definitely felt like the DVC rooms I’m used to staying in. It reminded me a bit of Old Key West in fact. While I was there I also took photos all around the resort. Watch for a Wandering Vero Beach blog in the next few weeks to see all that this beautiful resort has to offer.