Have you ever wondered what the rooms are like in Kidani Village at Disney’s Animal Kingdom Lodge? I was lucky enough to spend three nights there last month and thought you might like to see the room. I was in room 7855, circled in yellow on the map below. 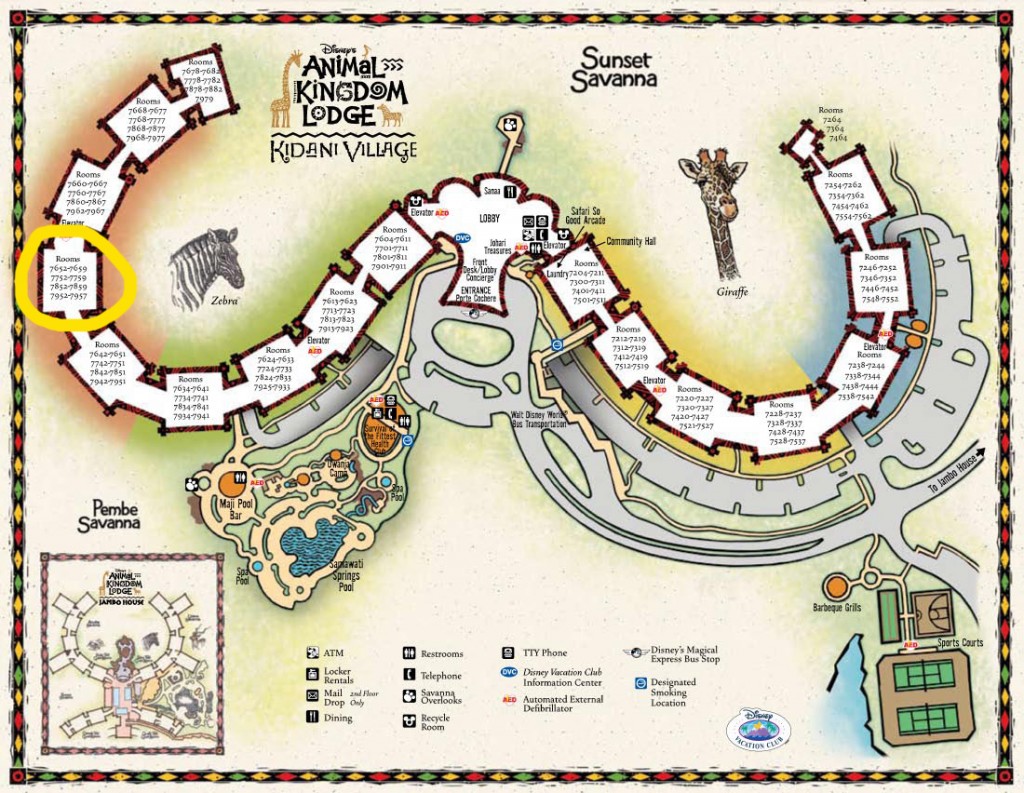 Kidani is a very large resort and although my room was quite a trek from the lobby, it was not far at all from where I was parked. There are several elevators down to the parking area that are spaced throughout the resort. It was nice and quiet in the room I stayed in.

I was in a savanna view room which overlooked the Pembe Savanna. This is a straight on view from my balcony. 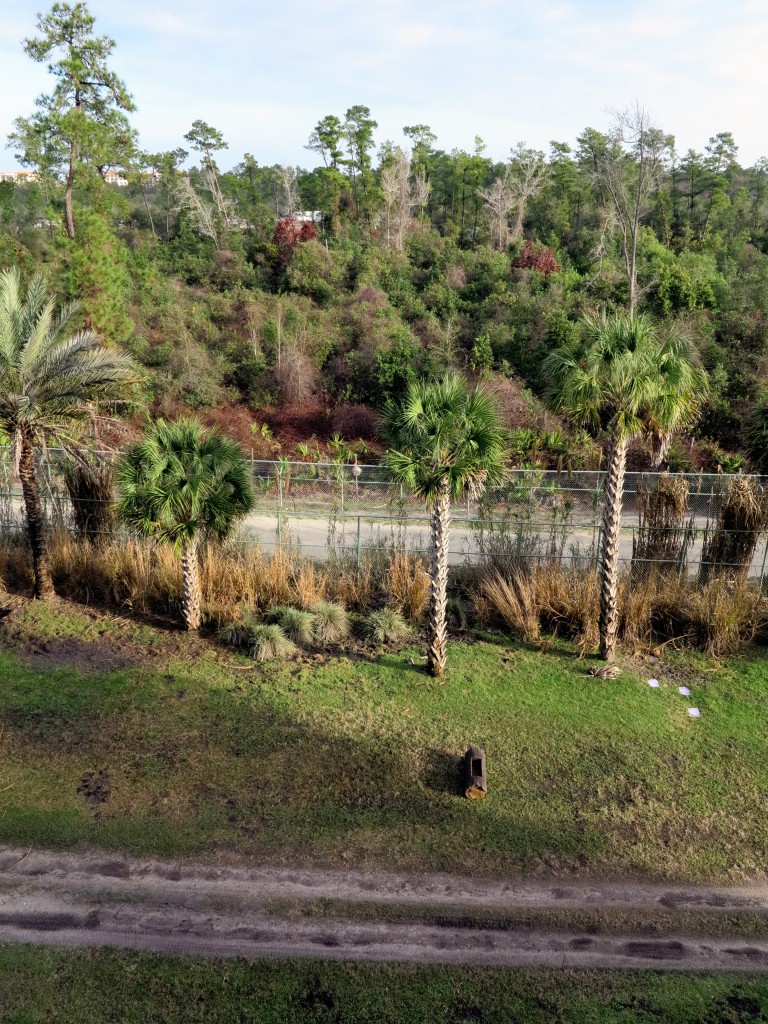 To the left I could see the barns where the animals went at night. I wish I would have had my binoculars because there were always a lot of animals hanging out in this area. 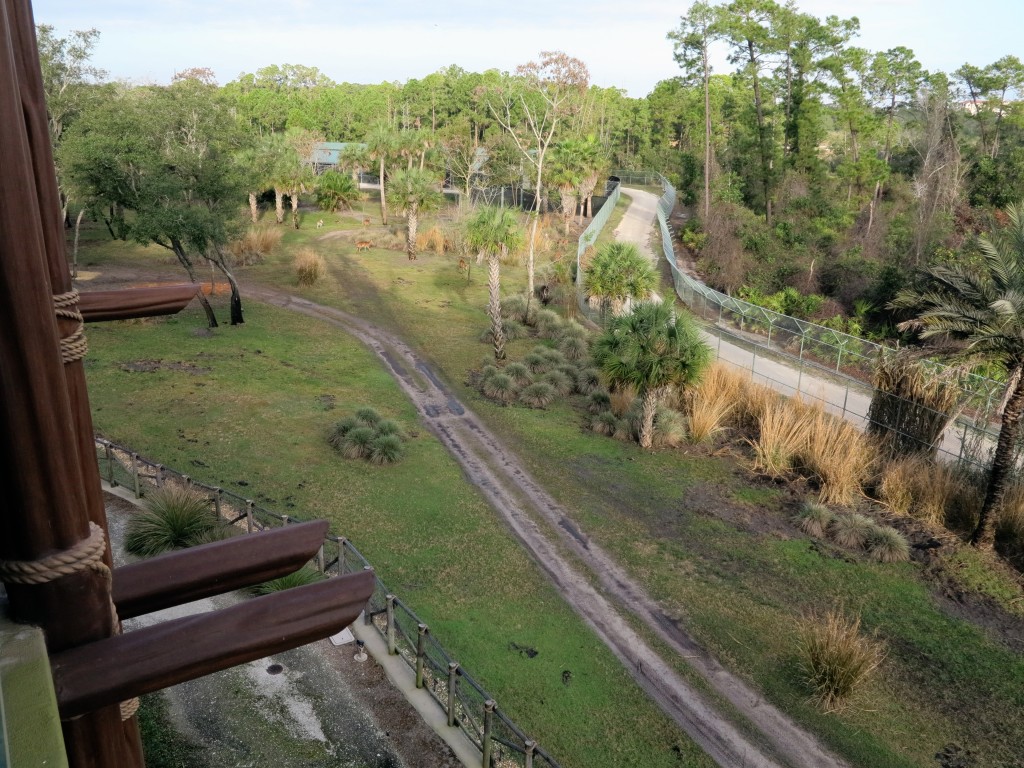 This was the view to the right. 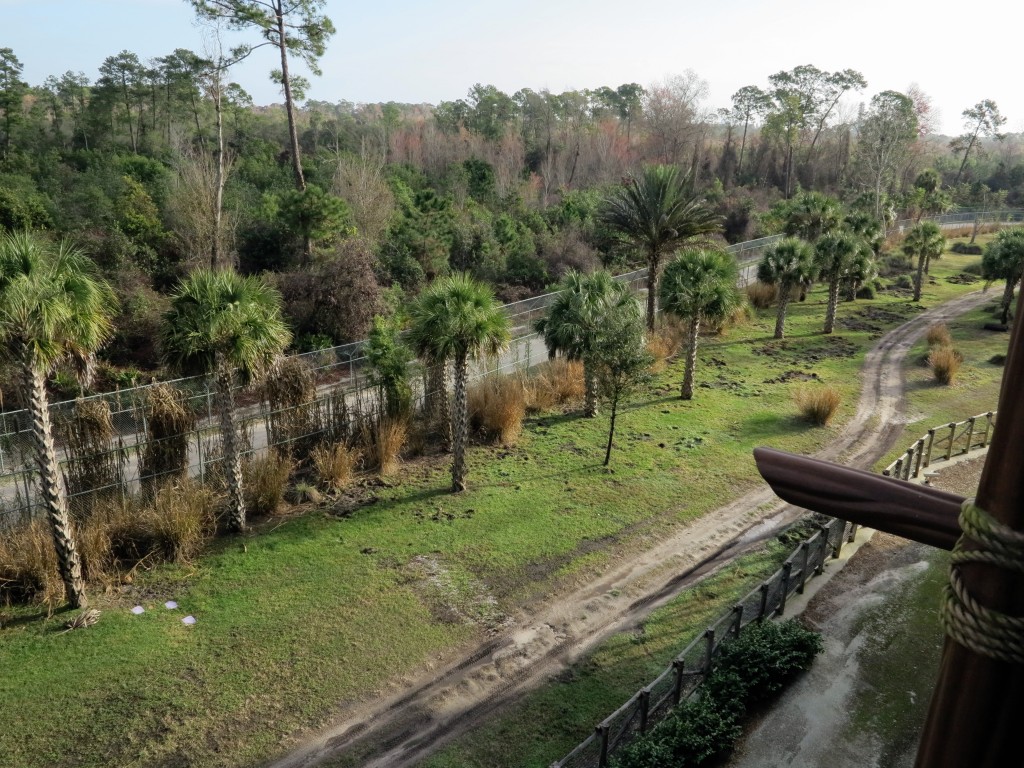 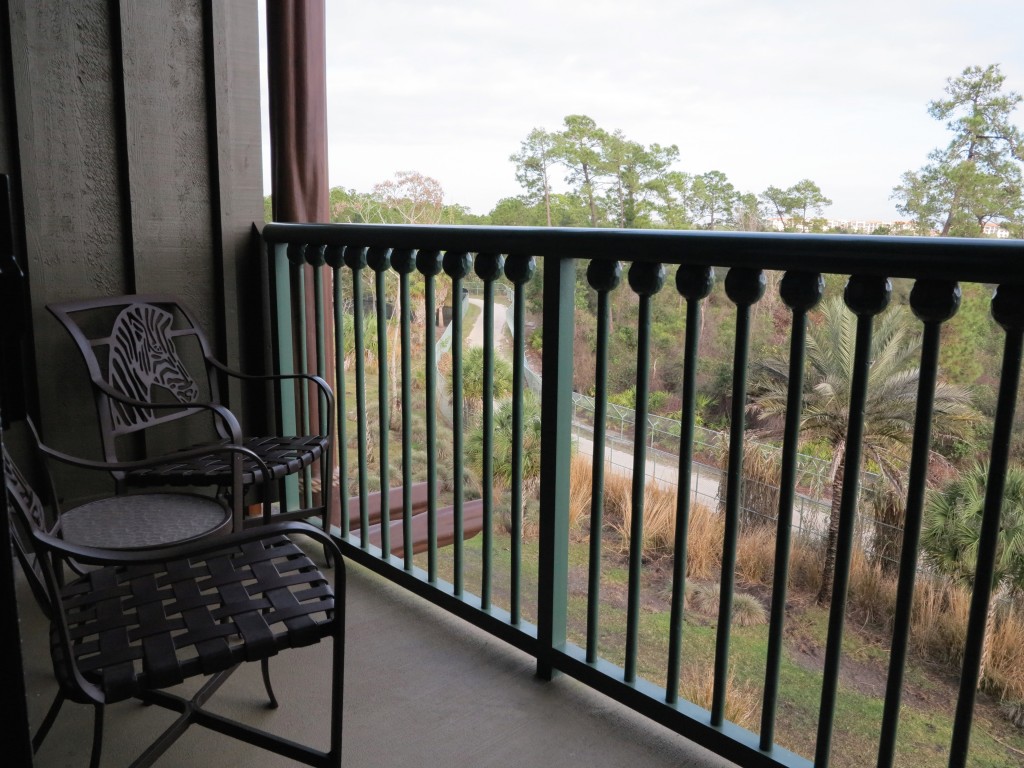 It was very pleasant to sit on the patio, even when the animals weren’t right below.

The room itself was nice. It was a studio so it had a queen bed and a full-size sleeper sofa. I slept on the sofa bed, which I thought was pretty comfortable as far as sleepers go. I like a firm mattress and this was definitely that. Those two tables are not nearly as heavy as they look and were easy to move out of the way. The bed was also simple to open and close. As a couch, it was very comfortable, probably the best I’ve experienced in any of the villas. The cushions stayed put did not sink down into the frame when I sat on them. My travelling companion said that the bed was comfortable as well. 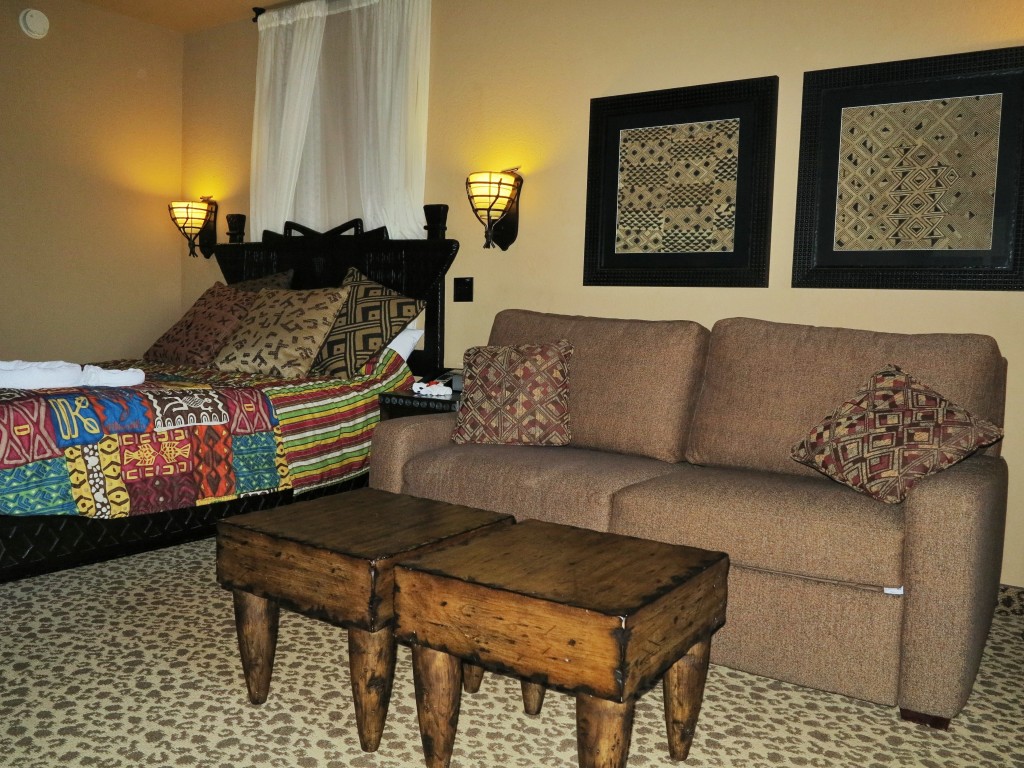 Across from the couch is a small table and chairs. At the foot of the bed is a dresser with a TV and DVD player, as well as an armoire with room to hang clothes. The vacuum cleaner lives inside of the armoire. 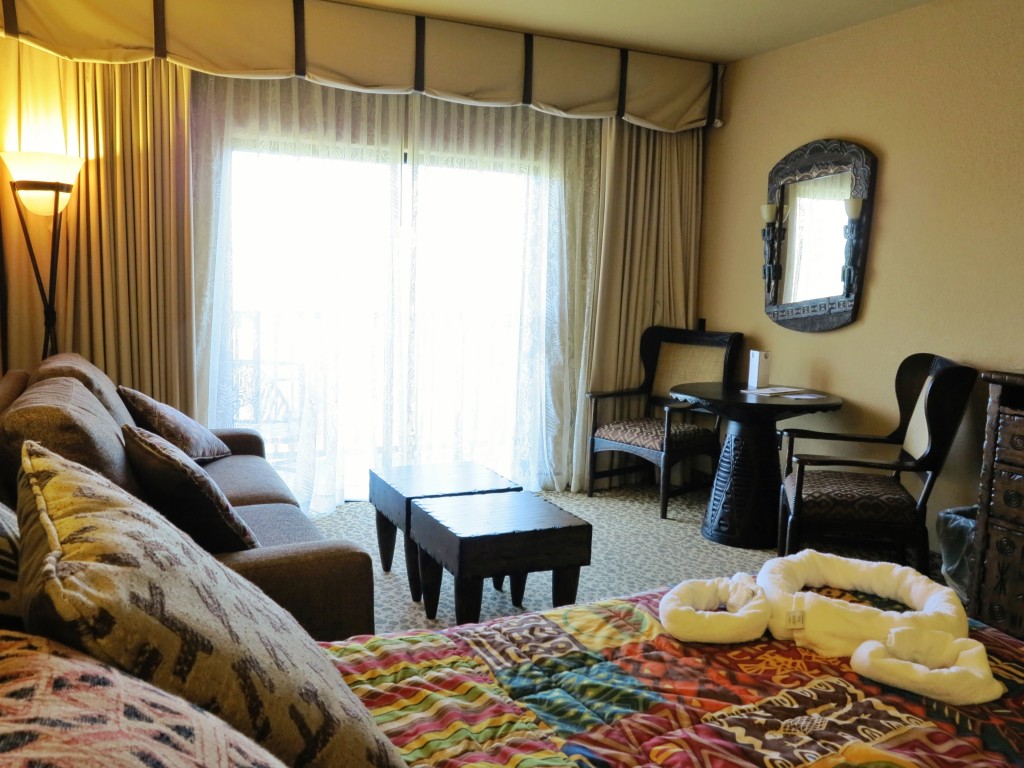 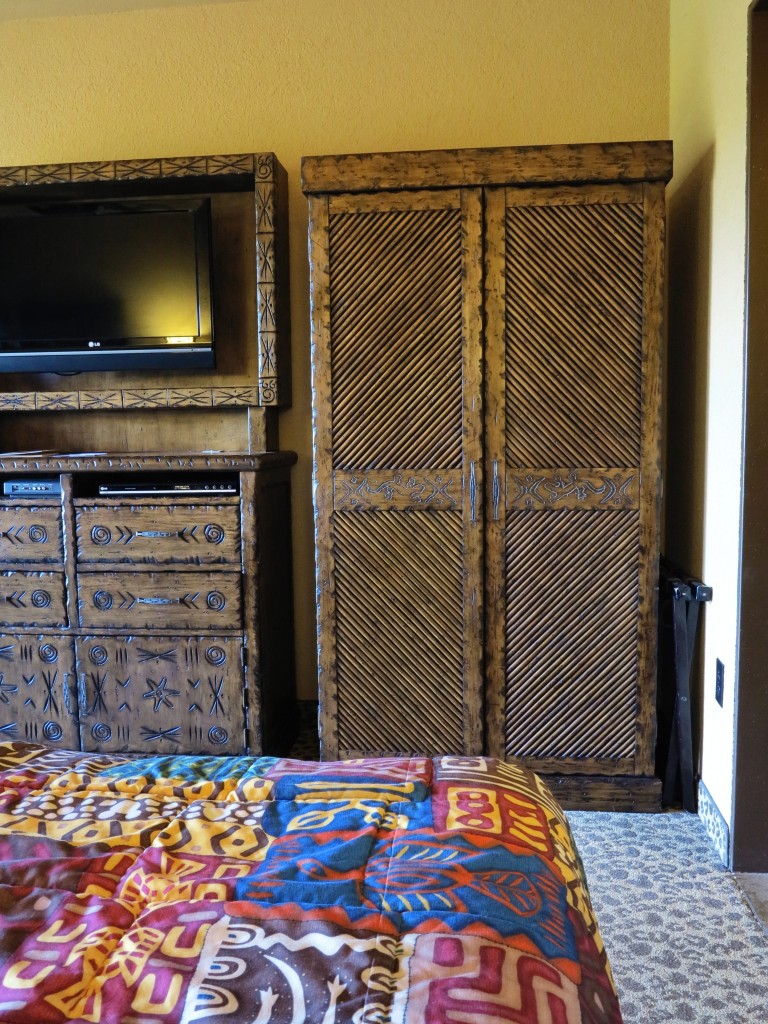 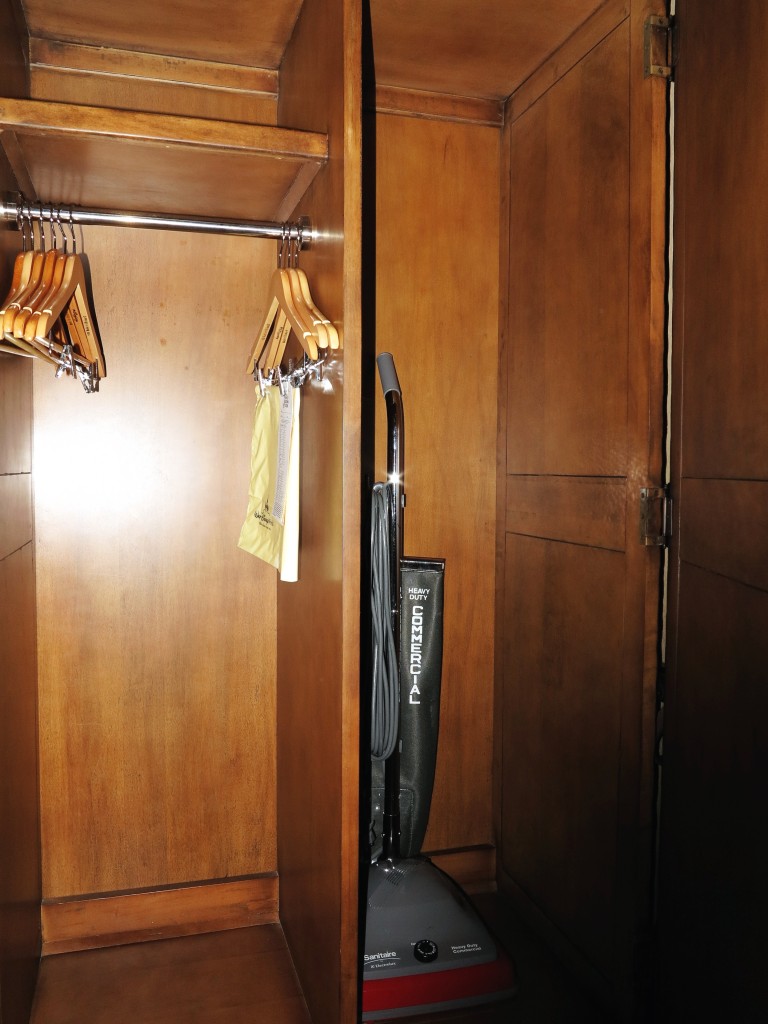 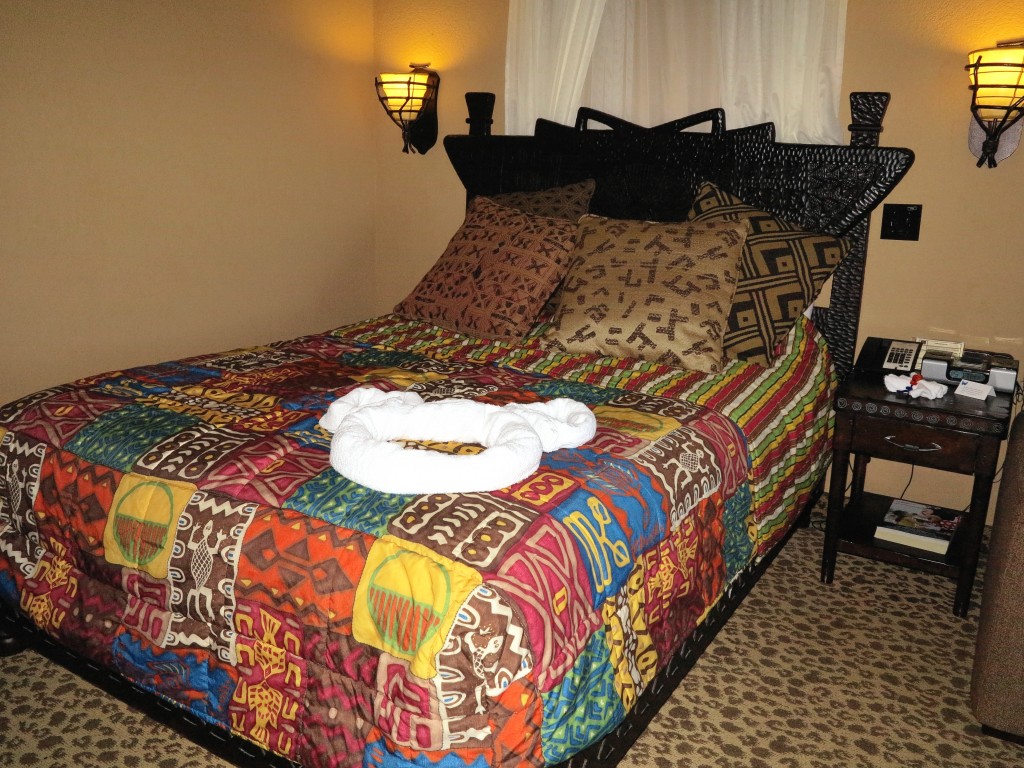 I thought the safari theme of this room was very well done. It definitely didn’t feel like I was in central Florida, but it also wasn’t overdone. I think it could easily have been kitschy and over the top but that wasn’t the case. 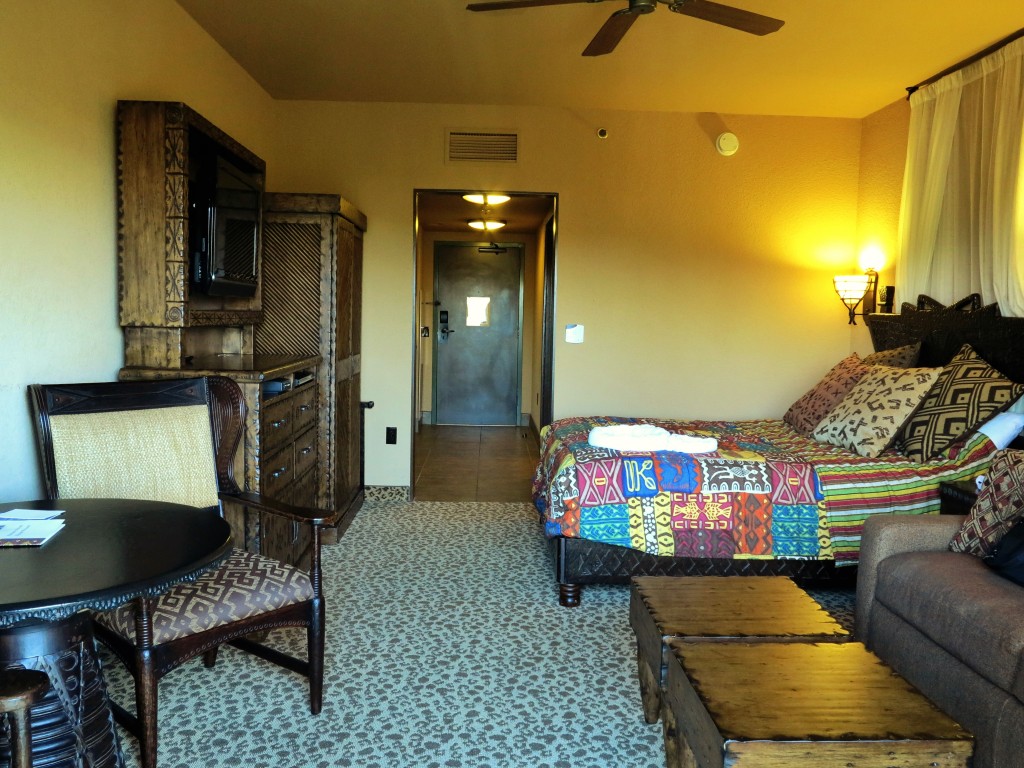 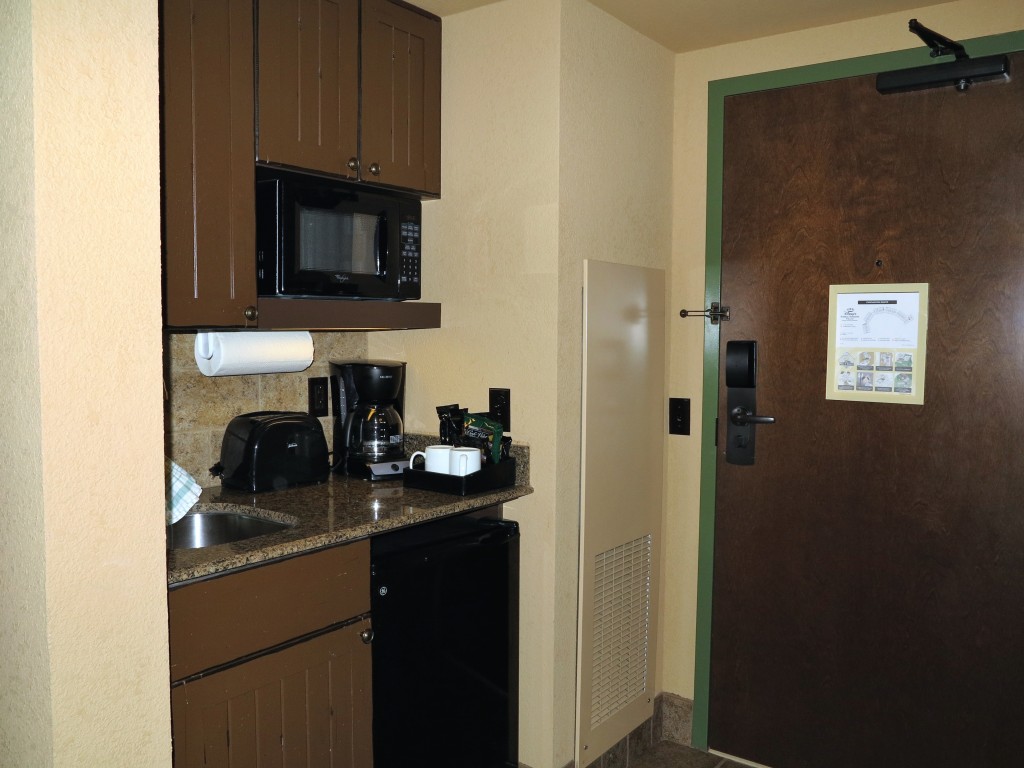 The bathroom was nice and big and was decorated well, with plenty of storage space below the sinks. 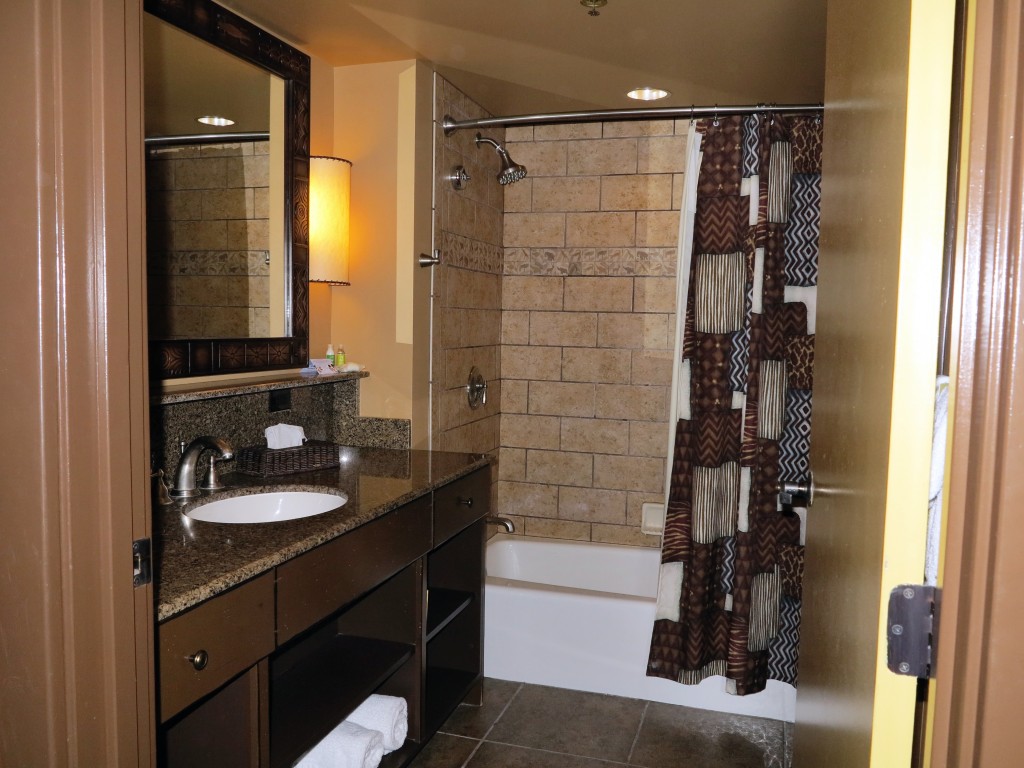 The little animal tiles in the shower made me smile every time I showered! That was a nice touch. 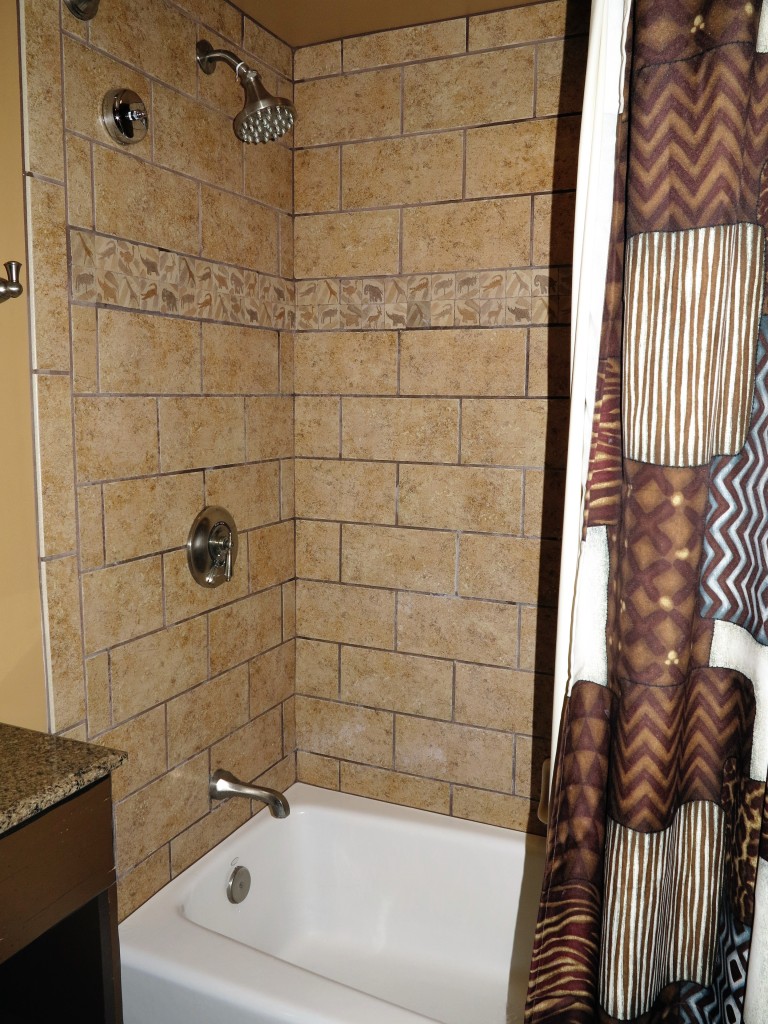 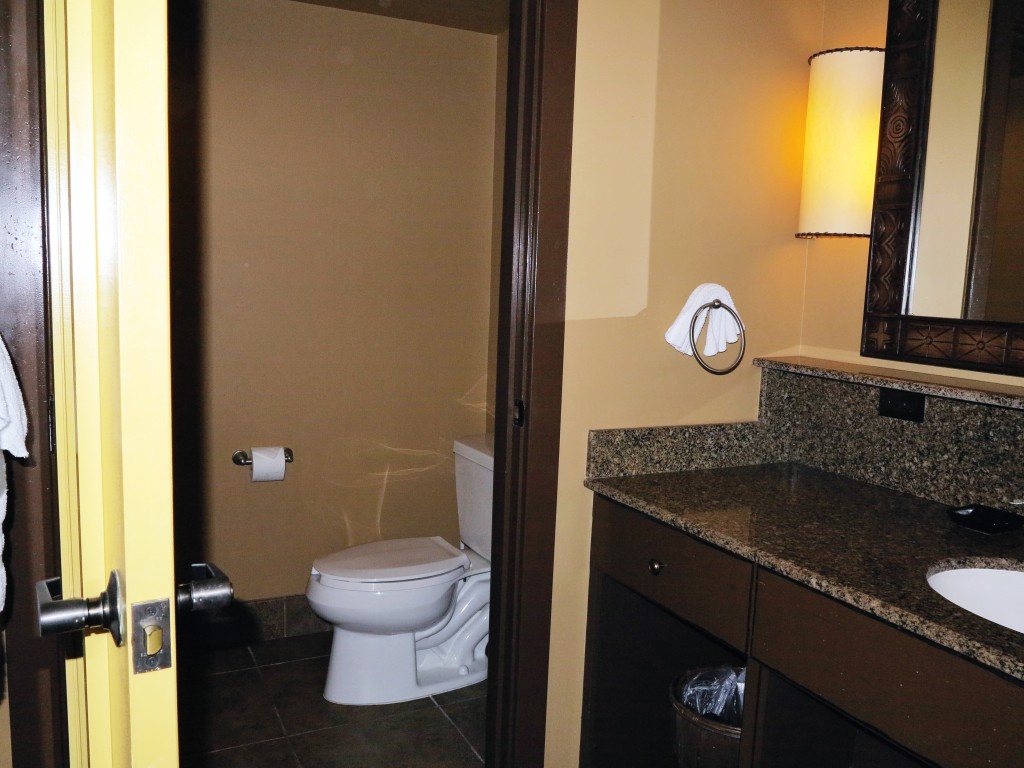 To the left of the kitchenette is a closet with a safe, an ironing board and iron, and some extra pillows and blankets. Also, this room has a door connecting it to the room next door. We found that space to be a perfect place to store our empty suitcases and my Owner’s Locker. 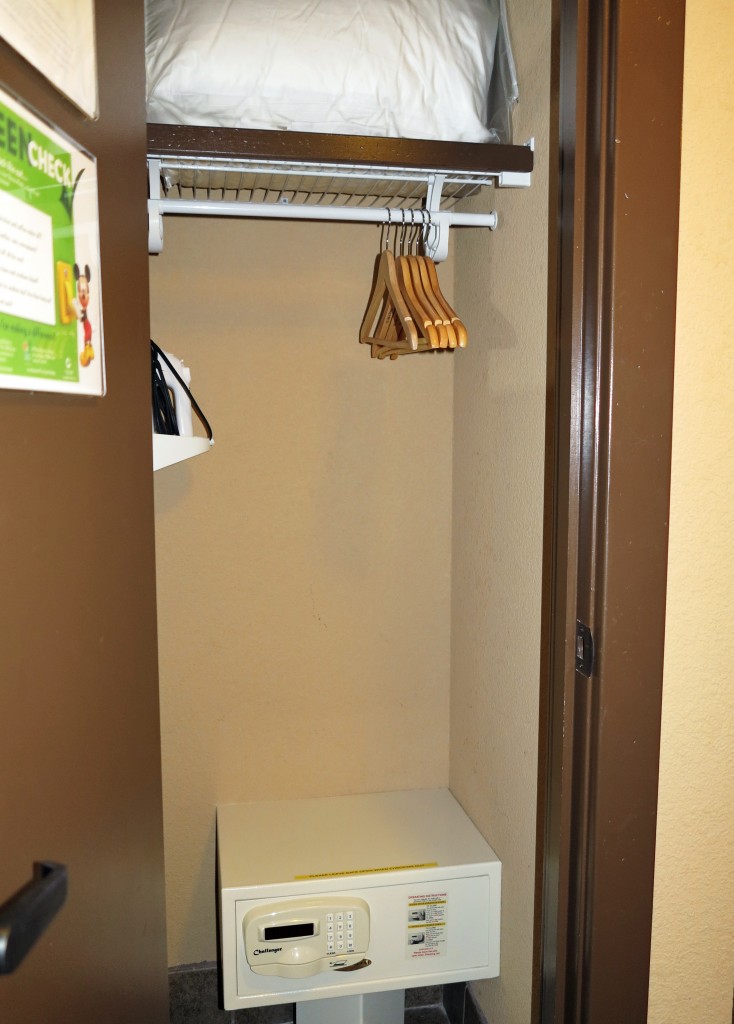 All in all, I enjoyed my room at Kidani Village. I would describe it as a peaceful retreat, a nice place to rest and recover after a long day of enjoying the parks. In fact, I think it was one of the most calming rooms I’ve experienced while at Walt Disney World.