Yak & Yeti: A Hidden Gem in the Jungle

Let me first mention that this is a story that I have told a lot. It has been just over a year since I had the chance to dine at Yak & Yeti and, even now, I still label it the best meal of my life (thus far). 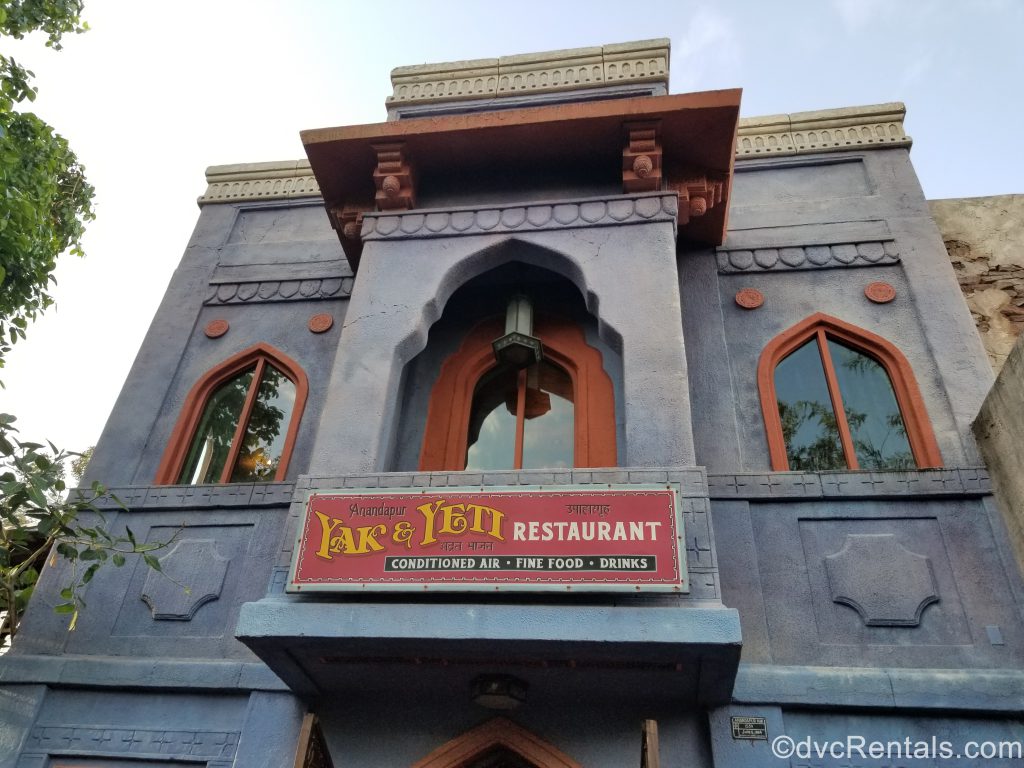 I consider myself a bit of a foodie. Aside from things like mushrooms (my one hard ‘no’ in terms of food) I am a very adventurous eater and particularly enjoy broadening my culinary horizons.

When I was told I would be going on my first Staff Research Trip, I spent quite some time scouring the many menus of Walt Disney World (a rather large undertaking for someone who had never been). I made a long list of everything that sounded like it would be up my alley and slowly narrowed it down to a handful of options. Still, at the very top of the list even then, was Yak & Yeti.

For those who have never been, Yak & Yeti is a table service restaurant located in the Asia section of Animal Kingdom Park. They tout themselves as a “Nepalese-style restaurant” that serves a wide variety of pan-Asian cuisine. 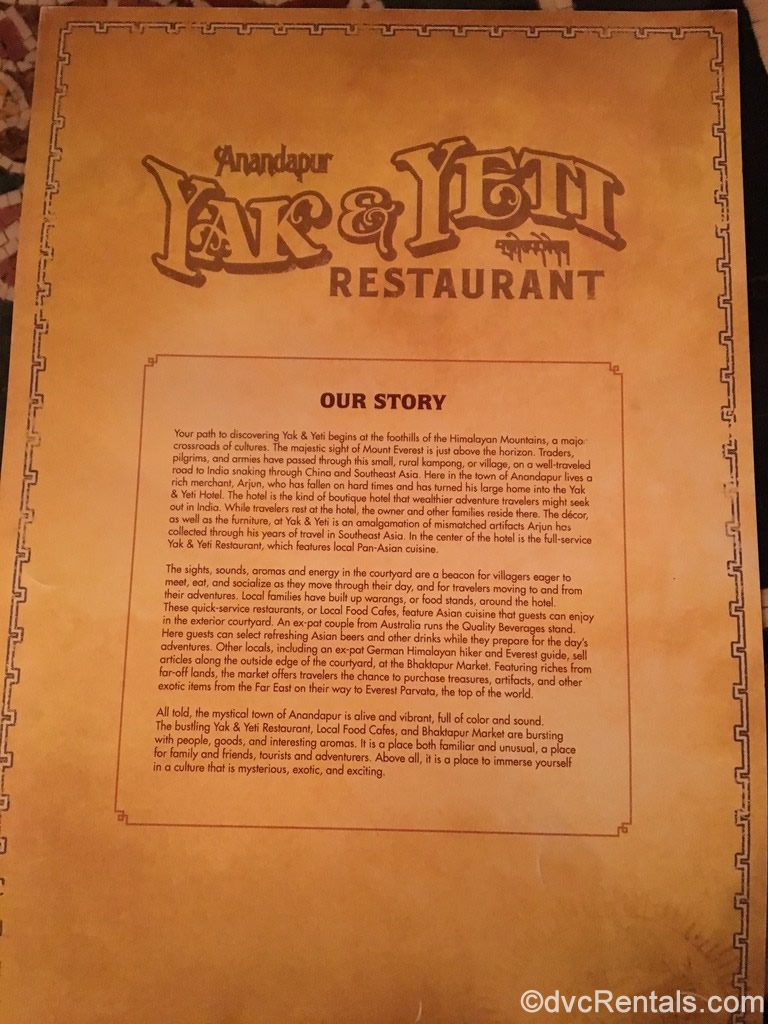 We arrived at the restaurant after hustling all the way from Pandora after riding Flight of Passage. Nothing builds a good hunger better than speed walking, clearly, as by the time we arrived, my stomach was already growling.

We had a reservation, so the wait was pretty negligible. It did, however, gave me enough time to look around at the décor.  The restaurant itself is filled with a lot of ornately carved woods and rich colors. The rich, dark woods are offset by the pops of color on the walls throughout the building. The walls are covered in a wide variety of art but, with food on the brain, I will admit that I forgot to get a closer look. 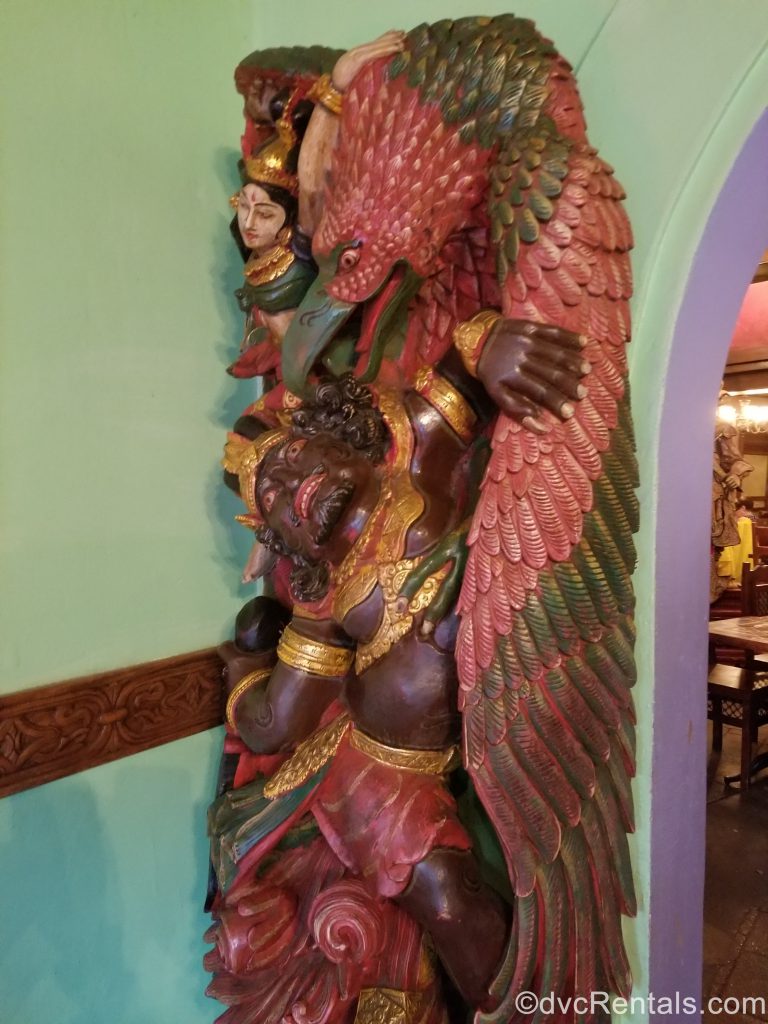 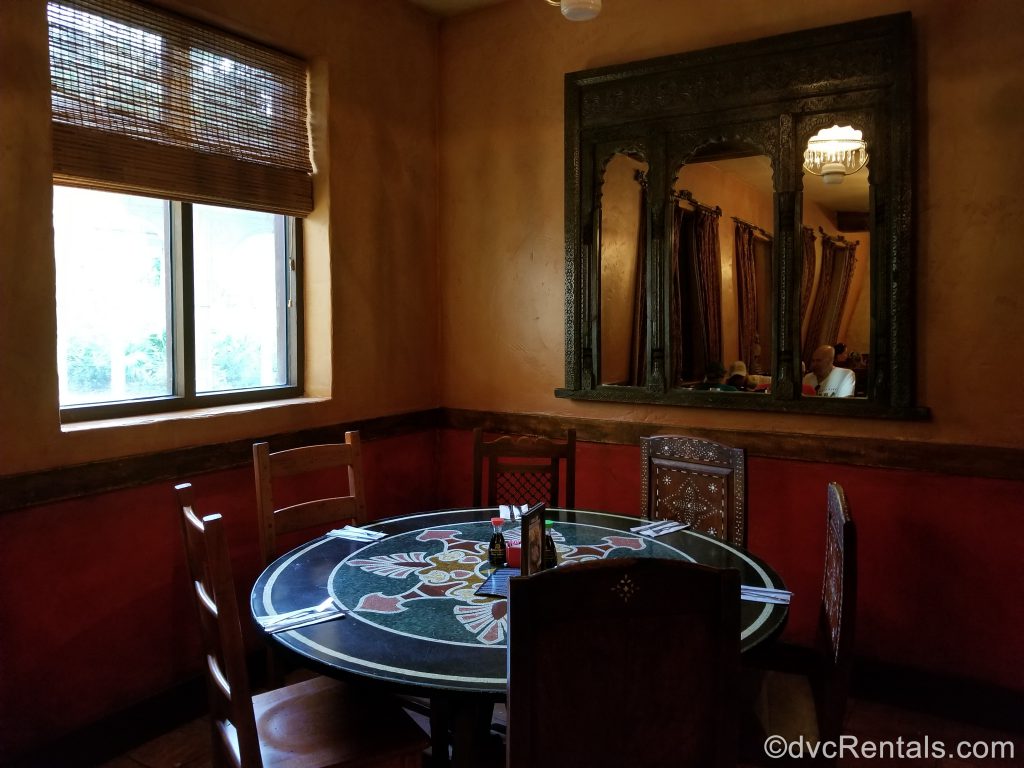 We were seated on the first floor; however, this restaurant does have two floors so there is a surprising amount of space. While it was not completely packed during our visit, it was certainly busy. Of course, me being me, all of that sort of faded to the background when it came time to contemplate the menu. 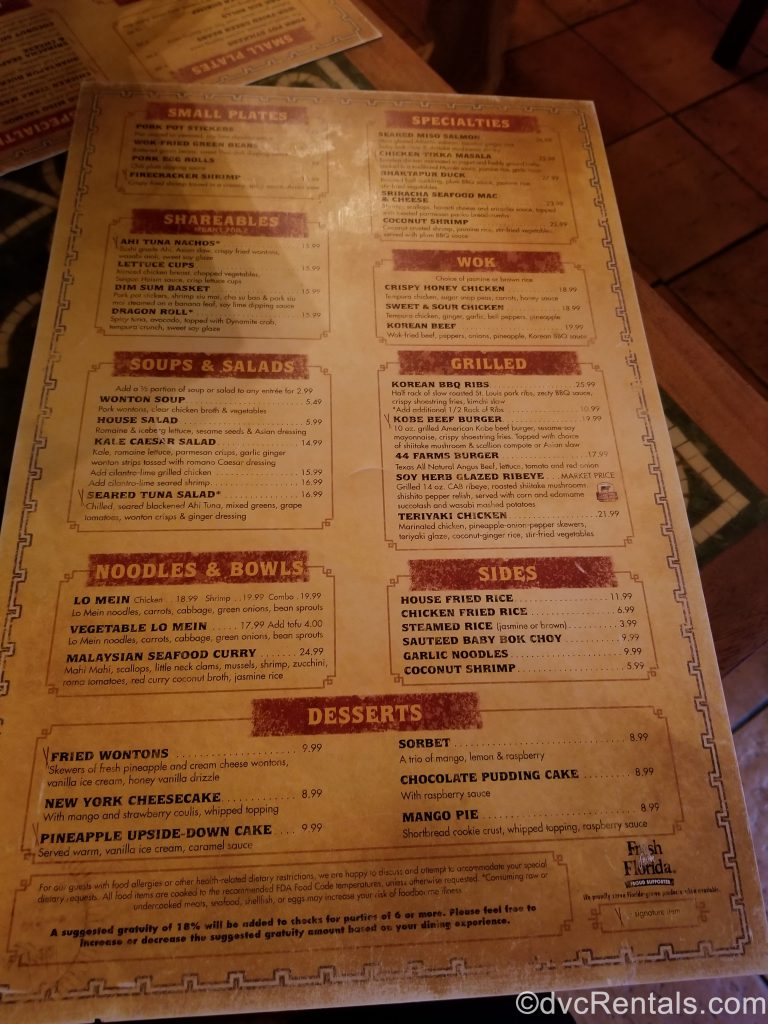 Narrowing down my choices was difficult. Yak & Yeti has a huge variety of food. From shareables, to noodle bowls, wok options, and food from the grill. Plenty of options were calling my name, particularly the Lo Mein, the Sweet and Sour Chicken, the Pork Belly Ramen (do I ever enjoy pork belly!) and the Bhaktapur Duck.

In the end, it was a last-minute call, so I went with my gut and out of my comfort zone, to the Bhaktapur Duck. Described as “roasted half ducking, plum BBQ sauce, jasmine rice, stir-fried vegetables”, this would be my first-time trying duck at all. (Though, full disclosure I did substitute the jasmine rice for fried rice, one of my favorite foods). I also ordered one of the signature cocktails, the Yak Attack. 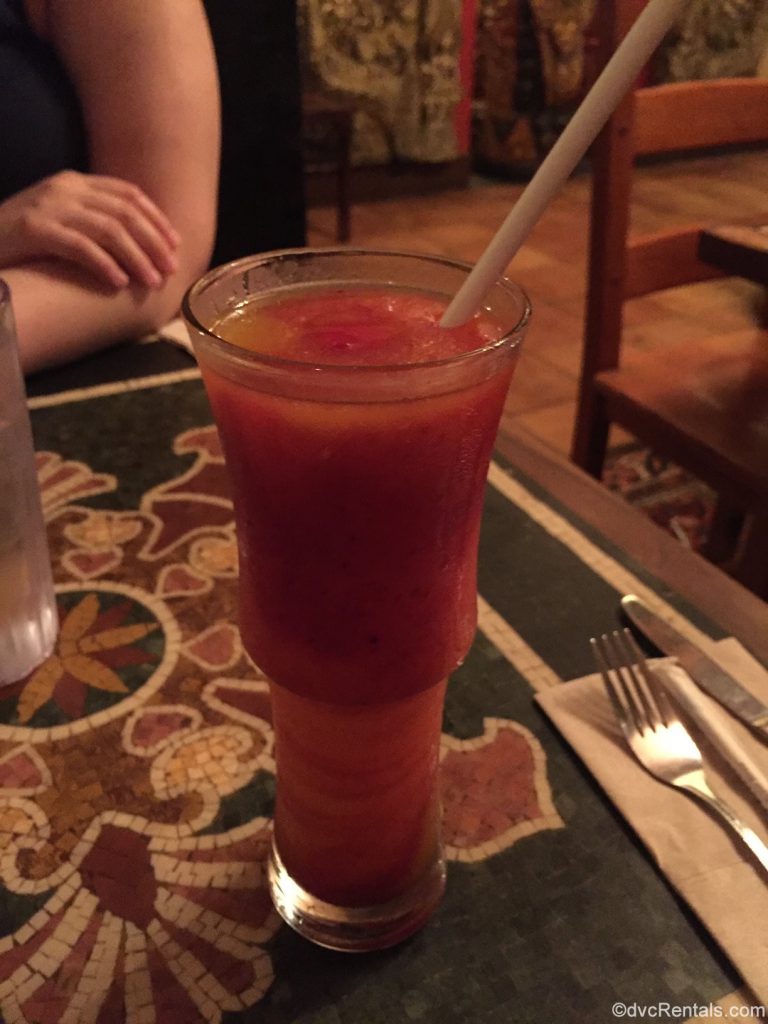 The other members of my party ordered the Honey Chicken and the Lo Mein. 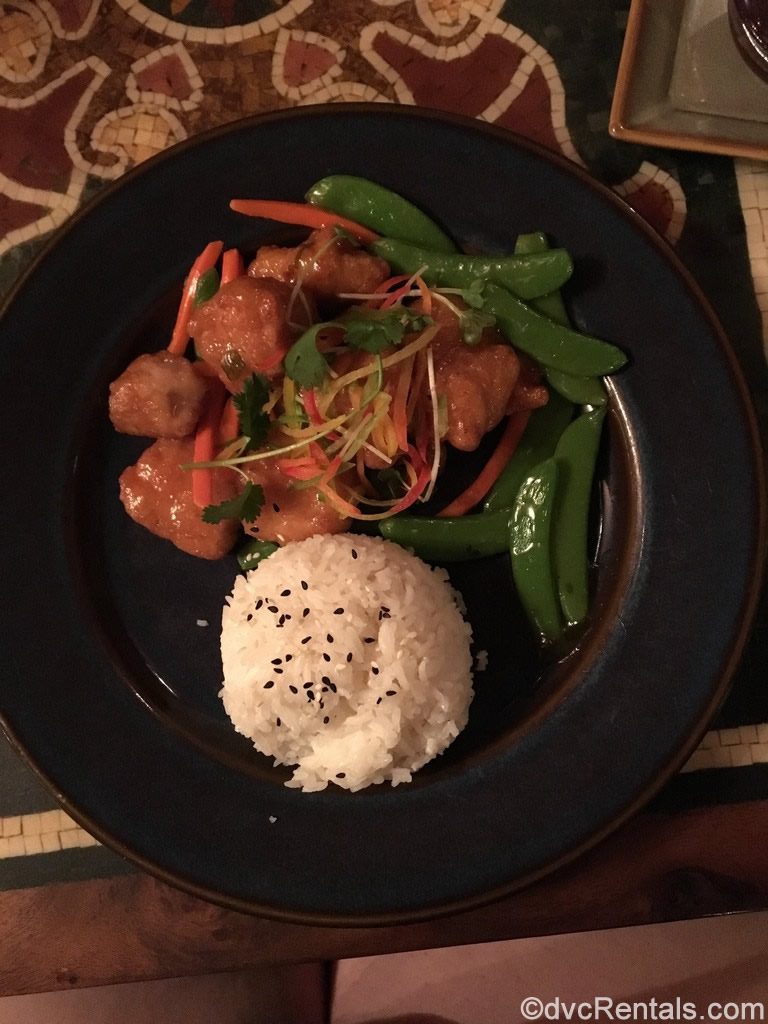 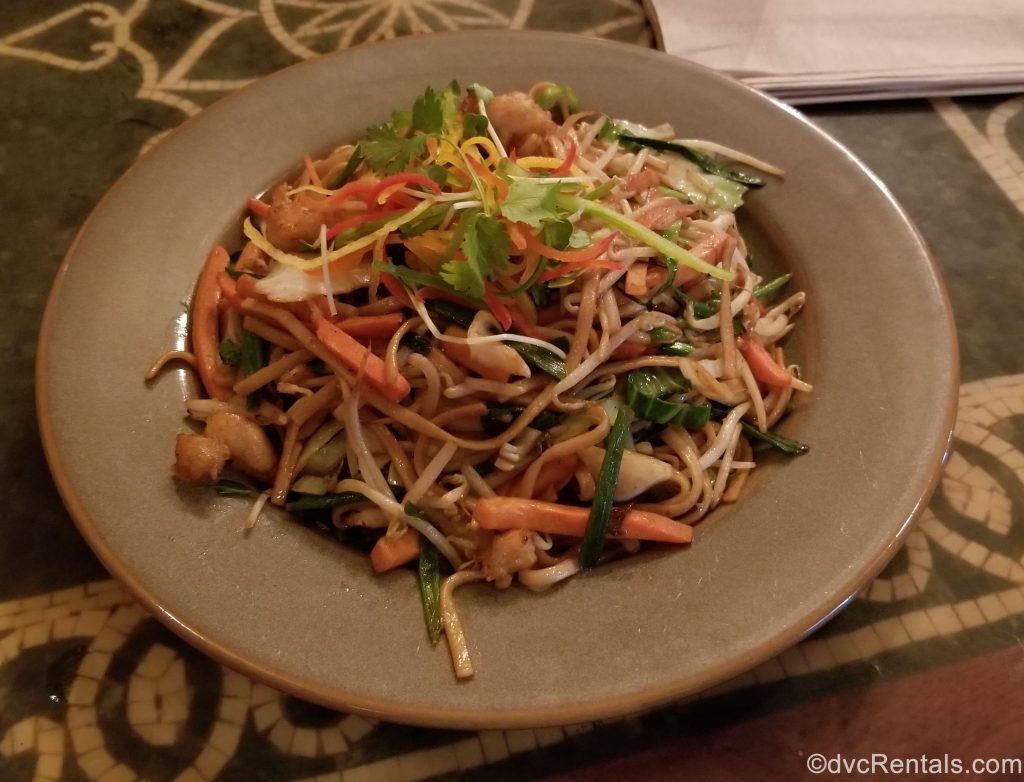 I should mention that we did kick things off with some shared Pot Stickers, but after all of the “Disney Walking” (aka almost running) to make our reservation, we were all famished and polished them off before we could even snap a photo!

To say I enjoyed my meal was an understatement, as I am sure you have gathered by now. The plum BBQ sauce is a great level of sweet and tangy, and the duck was fantastic. (I later described it as the dark meat of a turkey, but better!). I was making the face of someone who was having an out-of-body moment and frequently pausing to remark how blown away I was. The fried rice and stir-fried veggies were also great, though I definitely avoided those mushrooms.

Once the three of us had finished our delicious meals, we finished everything off by splitting a slice of the New York Cheesecake with mango and strawberry coulis. 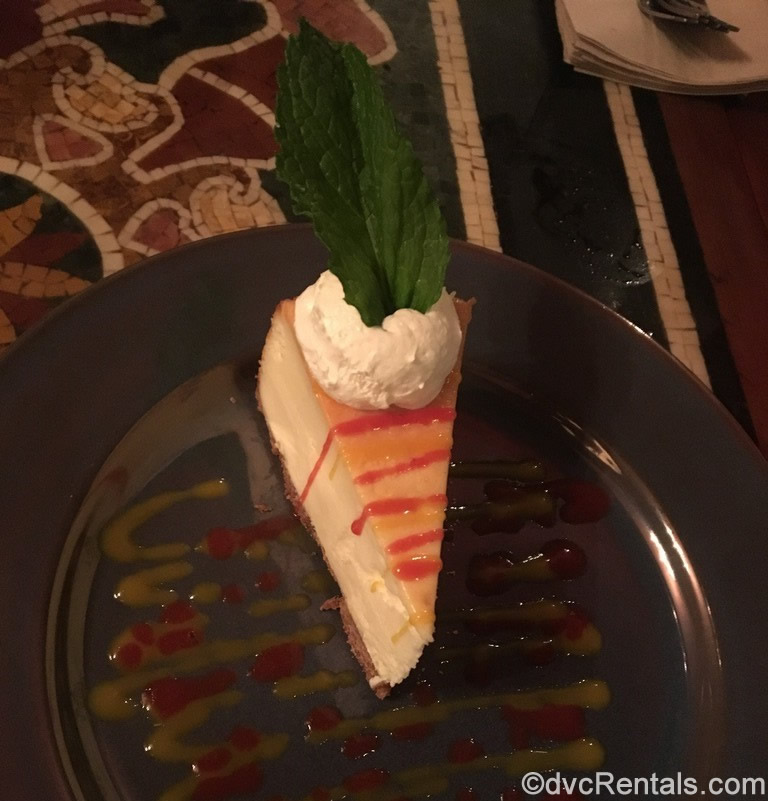 As you may have guessed, I have nothing but good things to say about Yak & Yeti. The décor, the atmosphere, the service, and the food, were all top-notch. While there may, someday, be a new contender who takes the number one spot, right now, Yak & Yeti wears the crown for the best meal of my life. If you ever have the chance to go and are a lover of pan-Asian cuisine, you should not hesitate.

I won’t be surprised if I dream about Bhaktapur Duck tonight.