Windows on Main Street USA in the Magic Kingdom

Most guests, especially first-time visitors, are awed by the view of the Cinderella Castle that towers over the end of Main Street USA in the Magic Kingdom. Who can blame them; it certainly is an awe-inspiring sight to behold! But there is much to be seen along Main Street. You can’t help but notice when the Barbershop Quartet known as the Dapper Dans is out there singing their hearts out. Or when the Main Street Trolley stops, and Cast Members disembark to dance and sing “Right in the Middle of Main Street USA”. If you are there when the Mayor of Main Street is greeting people, or the Fireman is riding his engine down the street, or the Marching Band is out doing their show, you sure can’t miss any of those! 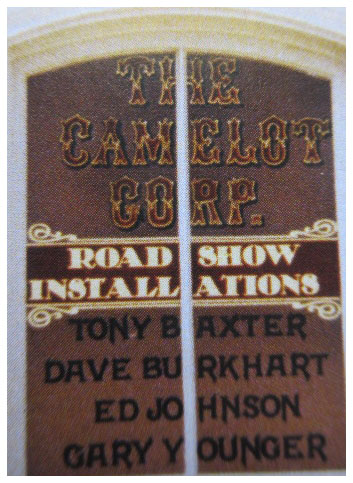 But you have to look up and to the sides of the buildings to see what this blog is about—Windows on the street that pay homage to Disney Imagineers, as well as other Disney Legends who were an important part of building Walt Disney World. Depending on your knowledge of Disney history some names will be familiar to you, while others may be obscure. But all made contributions significant enough to merit a Window on Main Street, clearly quite an honor.

Originally, the windows were put in place for Cast Members who were integral in getting the Magic Kingdom opened. Currently, in order to add a window, there are three qualifications. First, the honoree must be retiring from working for Disney. Second, the Cast Member must have reached a top Level of achievement. Lastly, the Imagineers and management must agree to the layout of the window.

At first glance, if you look at the windows you may think they are the names of shopkeepers for the various buildings. In fact as many of the windows have a funny or a “punny” comment under the name, it’s easy to believe these must be made up by Disney to give you a laugh. But in fact each name is real and the pun or remark has a very specific relation to the person or people being honored with a window. When I took the Keys to the Kingdom tour the guide pointed out many of the windows, and referred to them as “opening credits”. As most guests know Disney is all about Show, and like most shows, credit is given to those who put it all together.

So let’s get into the stars of the show and what they have done to achieve this stature at Walt Disney World. The first window is actually not on Main Street at all, but it must be mentioned. The window is located outside the park, on the top of the train station. It’s a homage to the man who was most important to creating Walt Disney World—who else but Walt himself. If you look up you’ll see a window that reads “Railroad Office, Keeping Dreams on Track, Walter E. Disney, Chief Engineer. Naturally the big kahuna gets the first window, if not for him there would be no Walt Disney World!

Stepping into the park and walking down Main Street you will see many other names as you look up at the windows. The more you knowledge you have of Disney history the more familiar the names will seem and the more you’ll “get” the (sometimes) joke references. For example Ub Iwerks was Walt’s most prolific animator for many years. Ub also, among other things, invented the multi plane camera. This allowed animators to show depth in new ways, which made cartoons look more realistic and less flat. Underneath his name on his window it says “Iwerks and Iwerks, Stereoscopic Cameras”. 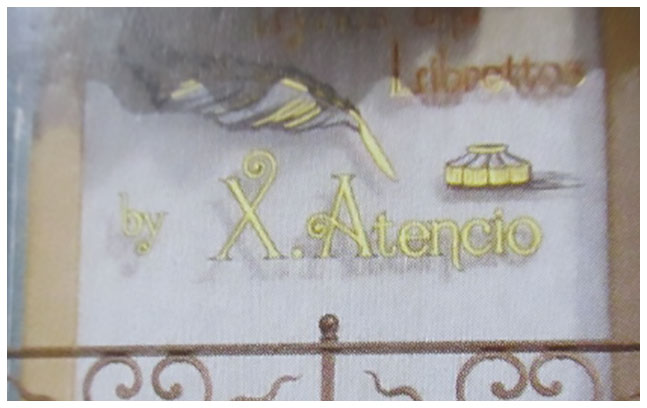 X (yes that is his first name!) Atencio is known for writing many well-known attraction songs. For example he penned “Yo Ho, A Pirates Life for Me” for the Pirates of the Caribbean attraction as well as writing the script for the ride. X wrote Grim Grinning Ghosts (the songs the singing busts are doing) for the Haunted Mansion, and the entire script for the “Ghost Host” who narrates the story as you ride along in your “Doom Buggy.” He also played a part in the music for Spaceship Earth and the Mexican Pavilion at Epcot, Space Mountain in the Magic Kingdom, and more. His window says “The Musical Quill, Lyrics and Librettos by X Atencio.”

A window you may have noticed is the one belonging to Yale Gracey. While most of the windows are flush against the building, Yale’s window is a small green bay window that juts out from the building, hence making it more visible to guests. His claim to fame at Walt Disney World was multi-faceted. His two most famous achievements were at Pirates of the Caribbean and the Haunted Mansion. Yale came up with a way to create realistic fire for the scene in Pirates of the Caribbean where the town appears to be burning. In the Haunted Mansion he came up with the aforementioned singing busts, as well as the room with Madame Leota. He was responsible for bringing a trick known as “Pepper’s Ghost” to the mansion, which creates the cool ghostly affects you see in the ballroom scene. Yale Gracey’s Window says “Buena Vista Magic Lantern Slides. Treat Your Friends to Our Special Tricks” 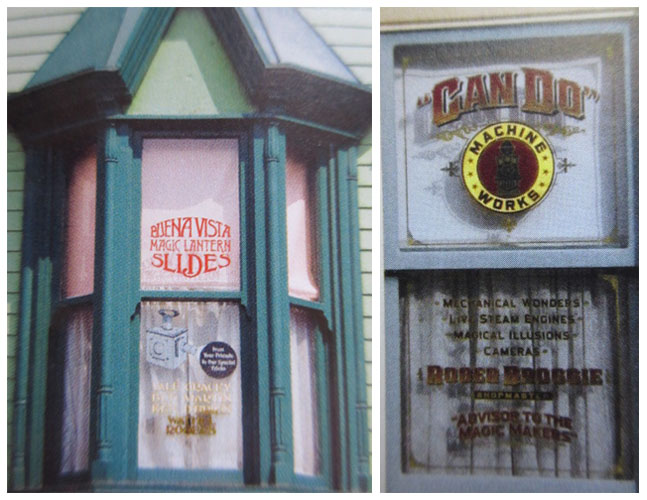 Marc Davis had his fingers in many of the Walt Disney World pies. He was came up with the idea for Country Bear Jamboree, played an important part in designing It’s a Small World, The Enchanted Tiki Room, and scenes in Pirates of the Caribbean, (including one with the pirates in the jail holding the bone for the dog who has the keys to their cell). In fact, if you look to the left of that scene you will see a sign on the wall that says Marco Daviso, a homage to the man who did so much for the attraction. Known for his sense of humor, Marc spiced up Jungle Cruise to add more jokes. His window at Walt Disney World says “Big Top Theatrical.”

Roger Broggie developed many of the mechanical park attractions. The Walt Disney World Railroad was his “baby”, as was the People Mover. Roger was a key player in perfecting Audio Animatronics, 360 Circle Vision Movies, as well as the first monorail (at Disneyland in California). He also helped create a miniature scale model railroad in the backyard of Walt’s home, called the “Carolwood Pacific”. Roger’s window says “Can Do Machine Works. Mechanical Wonders, Live Steam Engines, Magical Illusions, Cameras. Shop Master. Advisor to the Magic Makers.”

Most movies begin and end with the name of the producer of the movie, and the Show that is Walt Disney World is no different. Just as we started with Walt Disney’s name on the first window, it is fitting that we end with Walt’s name on the last Window on Main Street. To find it, turn right at the Ice Cream Parlor at the end of the street, and look above the Plaza Restaurant. You’ll see “Walter E. Disney, Graduate School of Design and Master Planning”. 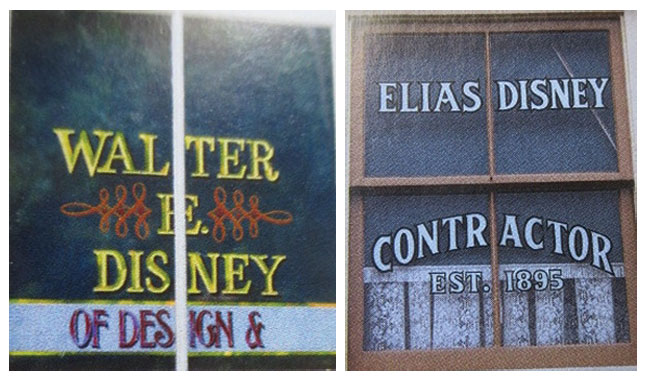 I have only mentioned a small fraction of the names on the Main Street Windows. Some names I believe most guests would recognize include Elias Disney, Walt’s dad, as well as his brother Roy O Disney and Roy’s son Roy E. Disney. Mary Blair, the well-known artist who was one of Disney’s first female animators, created the mural in the center of Disney’s Contemporary Resort, and designed much of It’s a Small World, has a window.

Next time you visit the Magic Kingdom take a look and see how many you recognize, and if you “get” the reference on the window. I would be surprised if anyone knew all of the names, but that can be part of the fun. You can take pictures of the windows/names that interest you, then when you have time you can research who that person was and what they did to make the Magic happen. I hope someday you take the time to check the window out; they are truly a fascinating lesson in Disney History.