When You WISH Upon a Cruise – My Top 10 Favorite Things about the Disney Wish!

Boy, oh boy, is the Disney Wish magical! From bow to stern, there is so much to do, see, eat, drink, and enjoy! I recently had the chance x to sail on Disney’s newest ship for the first time, and today I thought I would share a countdown of my top 10 favorite things I experienced on the Disney Wish!

Kid’s clubs can be found on all of Disney’s ships, but in my opinion, the clubs on the Wish are on another level! The “it’s a small world” Nursery is much larger, with stunning murals and play areas for the littlest sailors. It was cozy and cute, and the Cast Members were very knowledgeable and kind.

I may be in my 40s, but I was fully immersed in the different areas of the Oceaneer Club and can understand how it would be paradise at sea for the kiddos onboard! Children ages 3-12 can explore a variety of activities in several themed rooms, including the Marvel Super Hero Academy, Star Wars Cargo Bay, Fairytale Hall, and my personal favorite, the Walt Disney Imagineering Lab. Tweens and Teens also have the Edge and Vibe clubs, where they can enjoy programming for their age group. 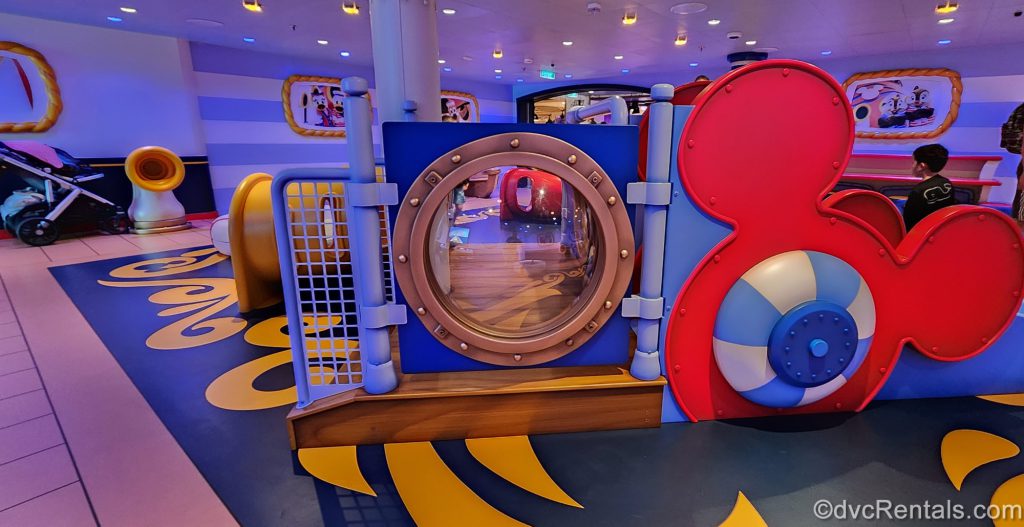 I have to say, my favorite feature was probably the slide that goes from the Grand Hall on Deck 3 down to the kid’s club area. Yes, even grown-up children can use the slide during open house times, and trust me, it is a ton of fun!

The Hero Zone is the Disney Wish’s version of the sports deck and is a clean, large space where guests can play games such as foosball, air hockey, and basketball, and what I think is one of the coolest family experiences on any of Disney’s ships – the Incredi-Course!

The Incredibles-themed gameshow-style obstacle course allows families to challenge one another in the Incredi-Games as they make their way through the different portions of the course. It’s almost like a giant bouncy house as the course itself is inflatable, and all the families participating were smiling and laughing and having an incredible time (pun intended!)

This collection of quick service-style counters is inspired by the new Mickey Mouse cartoon shorts and is located near the pools for a super convenient lunch or dinner! You’ll find Donald’s Cantina, which serves up made-to-order tacos and fajitas, Daisy’s Pizza Pies, Goofy’s Grill has burgers and crisp chicken tenders, Sweet Minnie’s Ice Cream, and my personal favorite, Mickey’s Smokestack Barbecue.

In all honesty, Festival of Foods became my favorite place to eat on the ship during our sailing. We found it was never overly busy, the service was quick, and the food was fresh and delicious! My top recommendation? Be sure to try the mac & cheese at Mickey’s Smokestack Barbecue!

Remember Redd from Pirates of the Caribbean? Well, she is hosting the deck party on Pirate Night and has assembled a group of fellow swashbucklers to entertain us with some fantastic renditions of rock songs, dancing, and stunts!

The show is full of high-energy performances, an appearance by Captain Jack Sparrow, and a spectacular display of fireworks that light up the night sky. It is so cool to see fireworks in the middle of the ocean, and to have them accompanied by the amazing Pirates of the Caribbean score is a bonus! This is always one of my favorite parts of a Bahamian itinerary, and I would definitely say it’s a must-do if you’ve got a pirate fan in your party!

Worlds of Marvel was my personal favorite of the three main dining rooms. The menu features all kinds of different dishes inspired by the Marvel Cinematic Universe and various cultural cuisines, but let me tell you, chances are you won’t be overly focused on your meal! 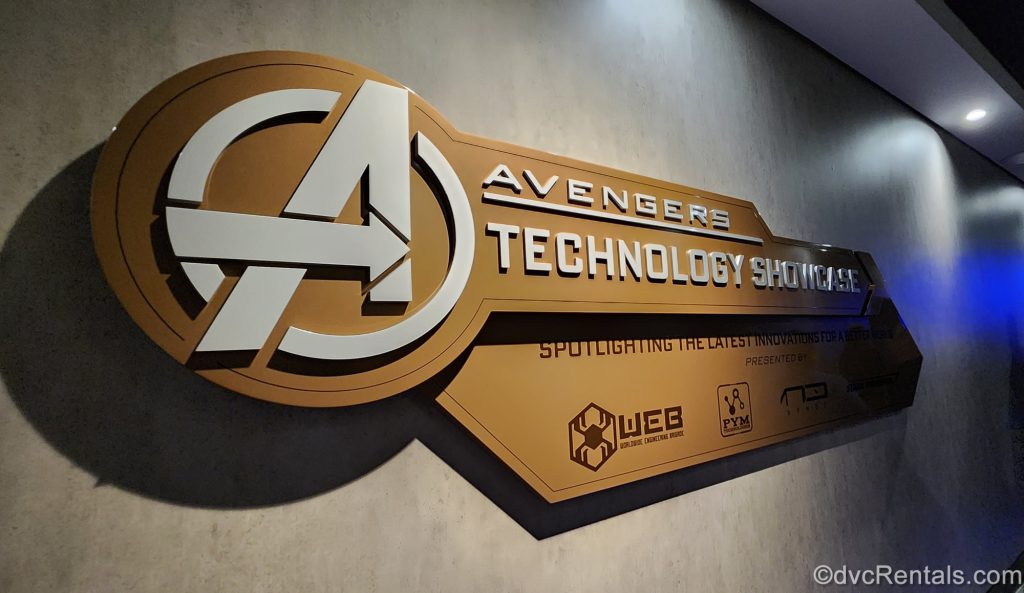 This dining experience is interactive, and after Ant-Man’s attempt to assist the cruise ship with its food supply goes wrong, you’ll be taking part in the mission to help set things right. A ton of Marvel characters from the different franchises are featured as you learn about the mission from the video screens around the dining room, but it doesn’t end there. I won’t give away too much, but eventually, the story comes off the screen for a real-life interaction that I thought was really cool!

Disney’s first-ever attraction at sea is a fun, and unique way to cool off and experience all the thrills of the immersive Disney rides we all know and love. It reminded me a lot of Mickey & Minnie’s Runaway Railway, as it is also inspired by the new Mickey Mouse cartoons. Once you are settled into your raft, you’ll join Mickey and pals on a Swiss Mountaineering adventure that doesn’t go as planned!

The ride features drops, turns, special lighting and sound effects, and of course, lots of splashes! It goes by pretty quickly, but as you glide through the 760 feet, you’ll get some great bird’s eye views of the ship and ocean. It was quite a rush and a lot of fun, and as soon as the ride was over, I wanted to get right back in line to go again!

Seeing the shows on a cruise is always something I look forward to, and the Disney Wish rendition of Aladdin blew me away!

I don’t want to say too much and spoil any surprises, but I will say that the production value was outstanding, the special effects were amazing, the acting and musical sequences were phenomenal, and overall, it was just fantastic! My very favorite element of the show was the Genie, who had a lot of talent and some great one-liners and absolutely stole the show. While I fully enjoyed all three of the productions the Wish offers, this one was by far my favorite!

If you’ve had the chance to sail on the ship or have seen any photos of the Grand Hall, you’ll see that the Disney Wish has a very different style of décor than the other ships in the fleet. This also applies to the chandelier that hangs over the atrium space. On the Wish, the chandelier is called the Wishing Star and brings to life an element of the enchantment theme of the ship.

The Wishing Star chandelier is beautiful at any time of day, but as the clock strikes midnight, it becomes even more magical! Much like the ceremony at the Magic Kingdom, guests on the Disney Wish can also experience the Kiss Goodnight onboard. The Wishing Star twinkles and shimmers and gives the Grand Hall some extra sparkle. Though it isn’t an overly long show, it is stunning! My personal recommendation is to try and get a spot on the floor of the Grand Hall if you can. Chances are you’ll see a group of other guests lying on the carpet to get a full view of the ceiling and all the effects, which I thought was a lot of fun! 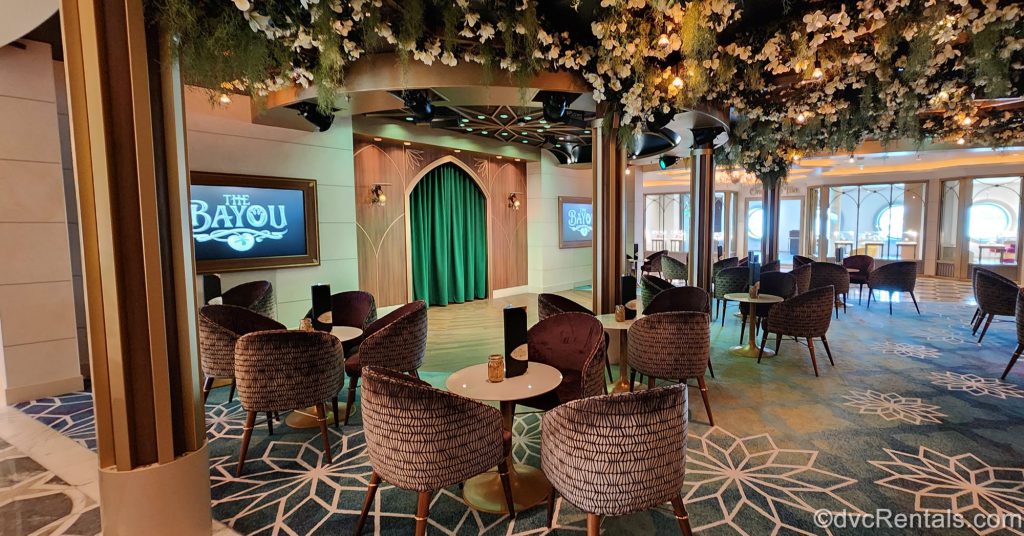 There are several amazing lounges to visit onboard, and The Bayou was my personal favorite! The design and décor are absolutely beautiful, and the influences and inspiration from The Princess and the Frog make for a regal and elegant take on the Deep South. 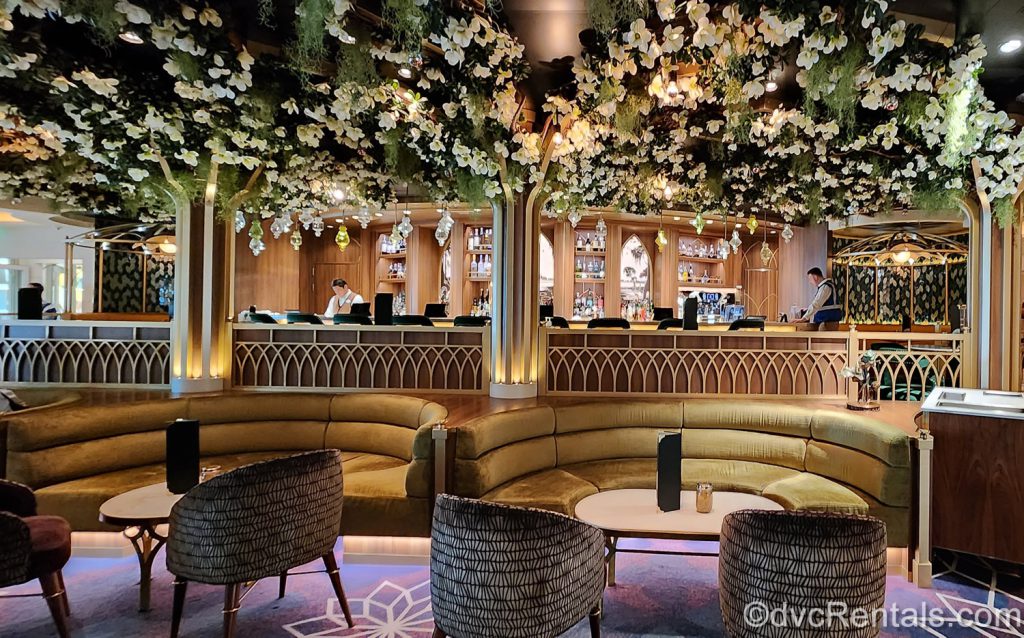 Of course, it’s not just the design that is inspired by the film. The menu boasts delicious beignets, sweet, frosty concoctions, and cocktails that you know Tiana would have in her restaurant! I quickly devoured three tasty beignets and could easily have enjoyed another batch! The live music was also fantastic. I definitely recommend stopping by The Bayou during your sailing!

This show might just be the best entertainment I have ever seen on a cruise ship! Going into it, I had no idea what to expect as this show hasn’t been presented on the other ships, but it is a live musical performance reminiscent of a vintage supper club. There’s singing, dancing, and a fabulous band that performs a variety of numbers with an incredible amount of sophisticated style! 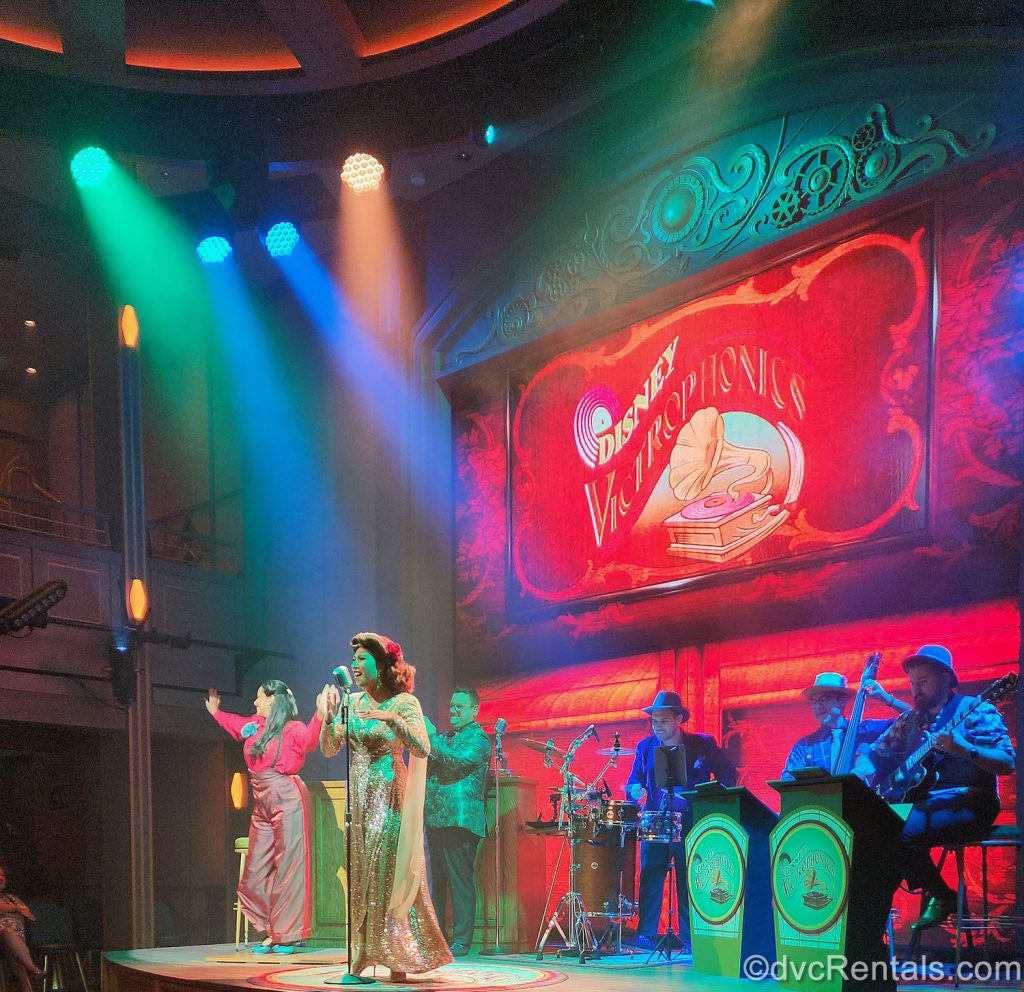 The Disney Victrophonics only performed once during our 3-night sailing, but I have to say that if it had been offered at other times, I would have gone to every show possible. I sat through the performance with a huge smile on my face, toes tapping the whole time! Not only that, but the show was held in the Luna Lounge, which is gorgeous all on its own. If you have the chance, I highly suggest checking out this show. It is an absolute delight! 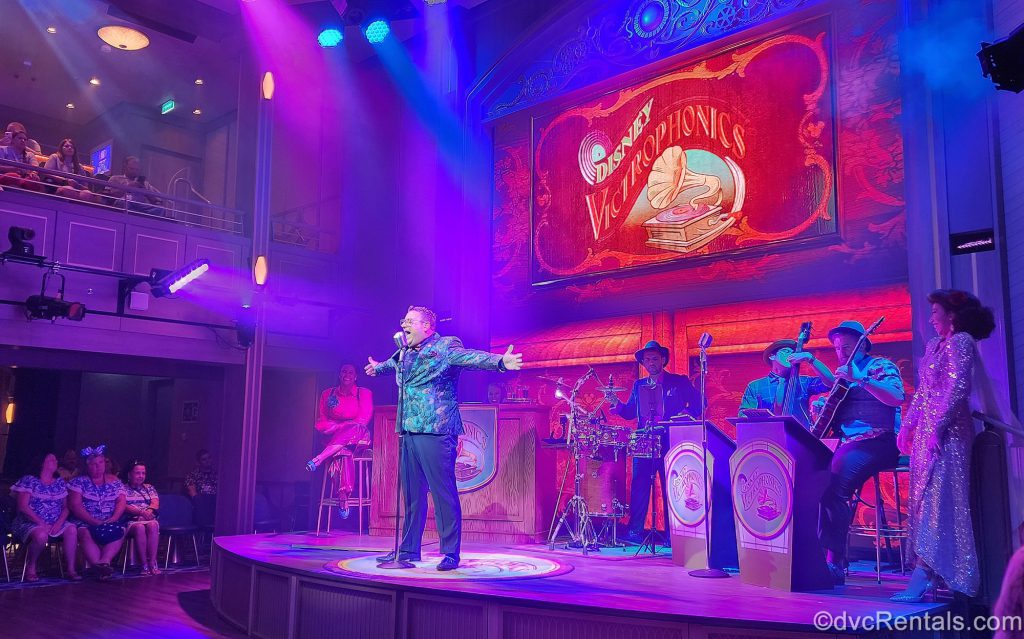 As you can see, there is a lot to love about the Disney Wish and believe me, I have barely scraped the surface of all the activities, dining, and more that there is to find onboard. I could probably have listed about 100 of the ship’s features here, but trust me, you’ll want to experience it for yourself! If you’re looking to sail or have any questions, be sure to reach out to our Cruise Specialists to find out more about all the things Disney Wish has in store!