The Voices of Liberty is an a cappella group (no instruments) that is made up of 8 members, 4 men, and 4 women.  The group performs multiple times daily at the American Pavilion in Epcot’s World Showcase. Times vary, so be sure to check the times guide they day you are visiting. In general, the shows are only during the daytime, so if you’d like to see this group, please plan accordingly. 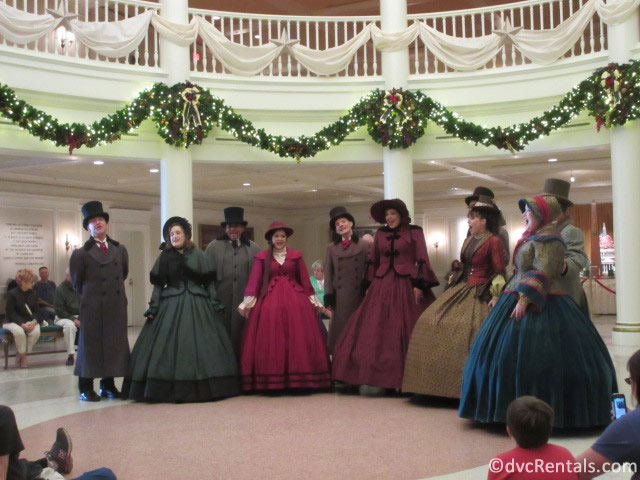 Since the group plays daily don’t expect to see the same singers if you opt to go multiple dates.  To be sure all the days are well covered there are a number of performers, and who is singing can change from day to day.

The songs performed by Voices of Liberty vary throughout the day, so you will not see the same show twice in one day.  The melodies consist mostly of “Americana” music, such as Oh Susanna, America the Beautiful, Skip to My Lou, etc.  But they will also perform some Disney songs, such as Let it Go and When You Wish Upon a Star.  I have also heard the group sing show tunes; they do a fabulous rendition of You’ll Never Walk Alone from the Broadway Show Carousel. Most shows end with a patriotic tune dedicated to those in the US Military. 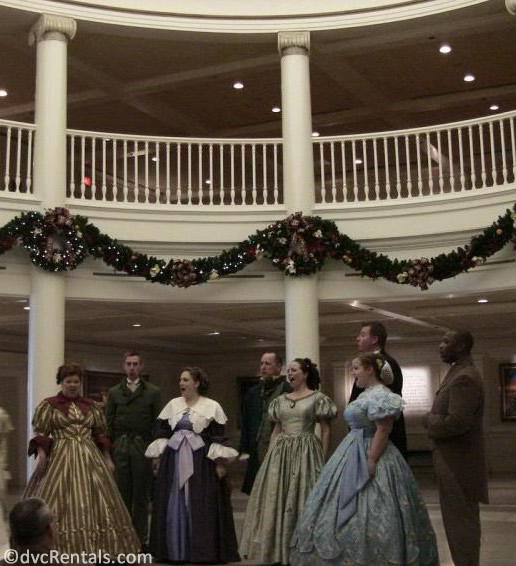 The Cast Members who perform in the Voices of Liberty are among the most talented at Walt Disney World. It is extremely hard to get hired as one of the members of the group, only the best of the best are accepted. Once hired most of the singers stay on for many, many years. According to Cast Members I have spoken to, being a member of this group is considered quite a “big deal,” and they are VERY high up there in the hierarchy of those working at Walt Disney World.

I recommend you arrive 15 minutes or more prior to show time if you want to get a seat on the benches with the best views.  For those who have never seen the show:  Be sure to grab a bench or sit on the floor on the right side (as you enter the building).  If you sit on the left, you will be facing the backs of the group, and it will be far less enjoyable.

The Voices of Liberty will make their appearance and begin singing exactly on time.  You will notice the members of the group are dressed in period clothing from the 1800s.  Most of the women wear wigs that reflect the hairstyles of that era, and sometimes the men wear hats that accomplish the same thing.  During the Epcot International Festival of the Holidays, their costumes are special to celebrate the season, as are the decorations where they perform, and the songs they sing. 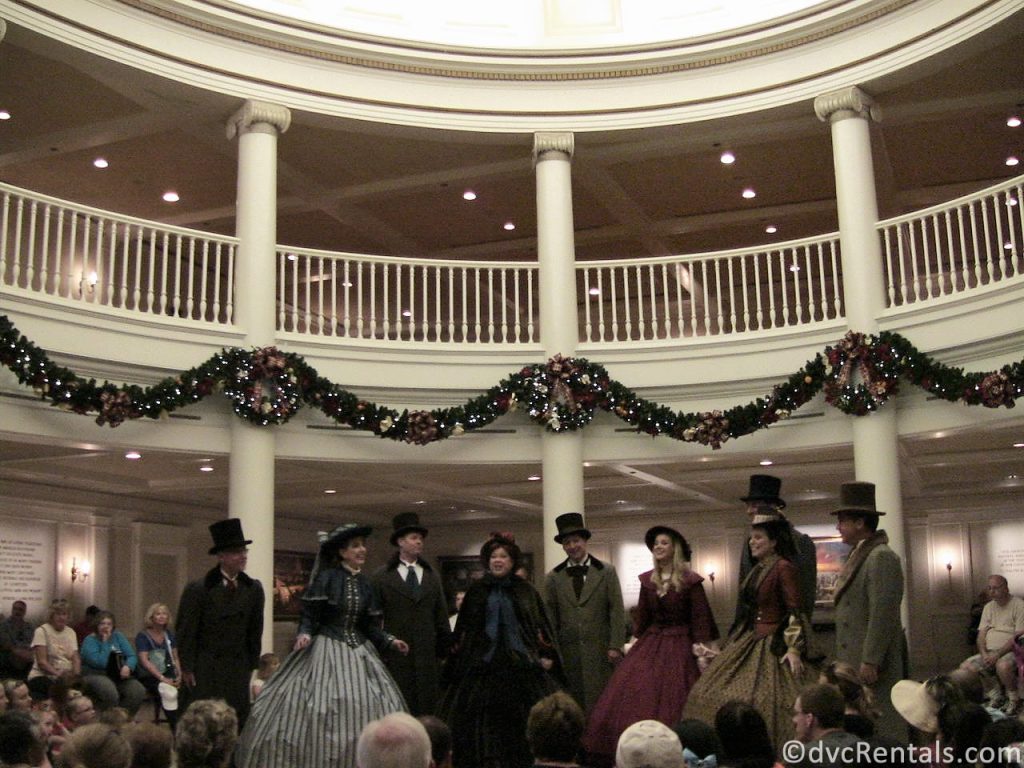 When you enter the building, you will see that the very center has a large rotunda.  Underneath or close to this area is the place that the music is best heard, as the rotunda allows for excellent acoustics.  After the group does their first song, they will invite anyone sitting on a bench (which are just outside the rotunda area) to move up and sit on the floor inside the rotunda, so they will get the very best experience possible. If you have back trouble, or if sitting on the floor makes you uncomfortable for any reason, sitting on or standing next to a bench facing the group is fine.

Be prepared to be very impressed by this very talented group. Their voices, whether doing a solo or harmonizing, are nothing short of fabulous.  And they do their best to make it even more entertaining by interacting with guests. For example, when they do the song Oh Susanna, one of the male performers does a solo at one point during the song.  He will walk over to one of the female guests (sometimes an adult, sometimes a child) sitting close to the front, hold her hand and sing a few bars of the song.  When he gets to the part where the words are “Susanna don’t you cry” he sings with such heart! Most guests eat it up when they are chosen to be sung to. Then, as he gets up to walk away from the smiling guest, he will pretend she won’t let go of his hand to allow him to leave.  That always gets a big laugh from the crowd.

In addition to their daily performances at the American Pavilion, the Voices of Liberty sing at other Walt Disney World Events.  They are part of the Candlelight Processional, the yearly telling of the story of Christmas, told by a celebrity narrator and backed by a huge choir—some of who are from the Voices of Liberty.  This is held outside on the stage on the water that is known as the America Gardens Theater. 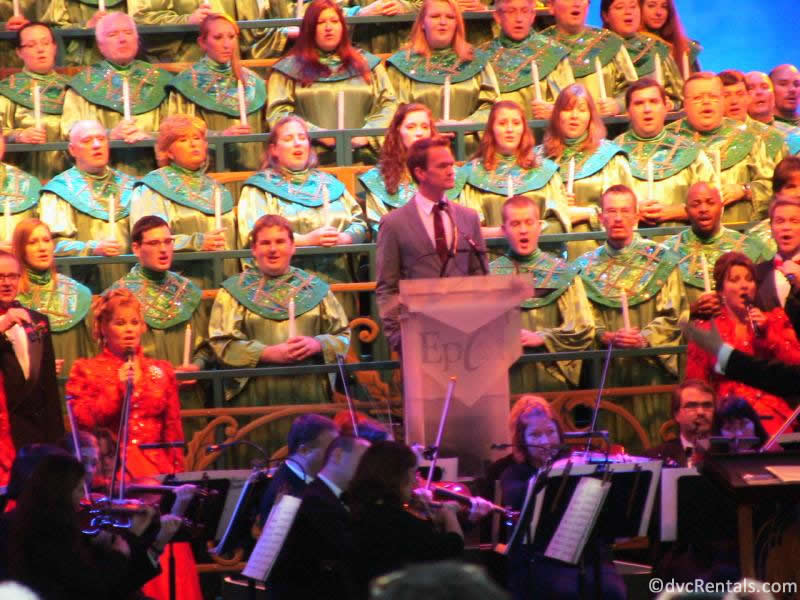 Special Voices of Liberty performances at the America Gardens Theater have also been held on the 4th of July, President’s Day, Epcot International Festival of the Arts, and for Celebration Epcot’s 30th anniversary in 2012. In general, when they perform outside they do not wear period clothing or wigs, but they will be beautifully dressed, generally in matching outfits. Fun Fact: Some of the members of the group perform at special events outside of Walt Disney World. Due to copyright infringement, they are known as the Liberty Voices when they play anywhere outside of the Disney parks. 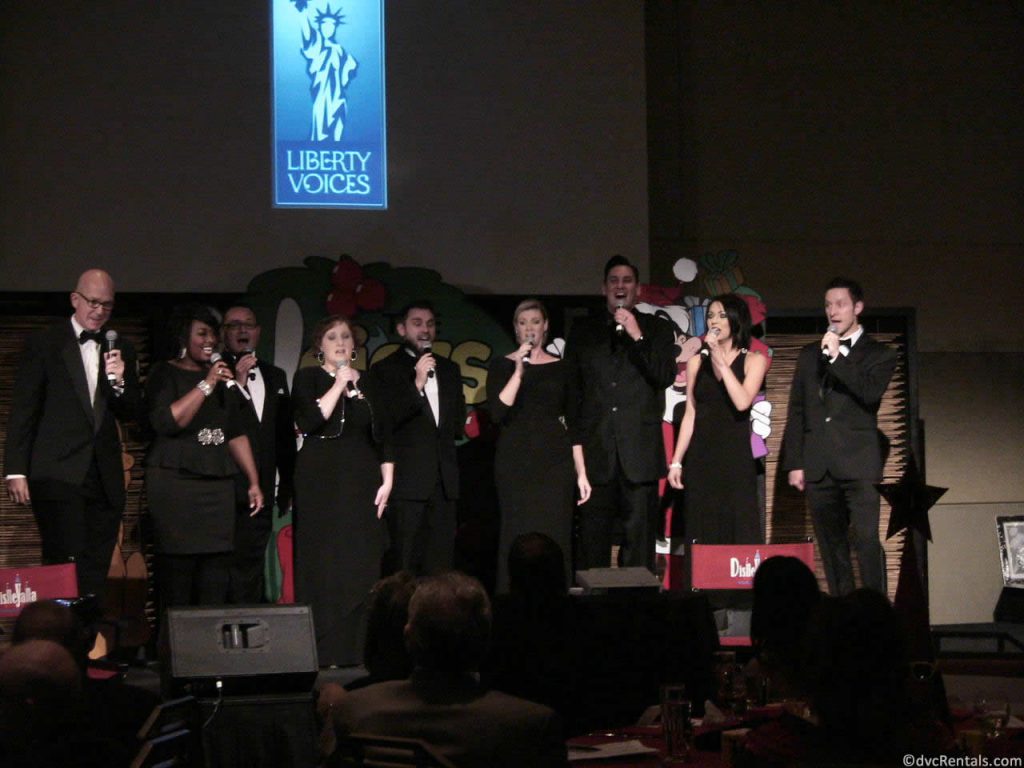 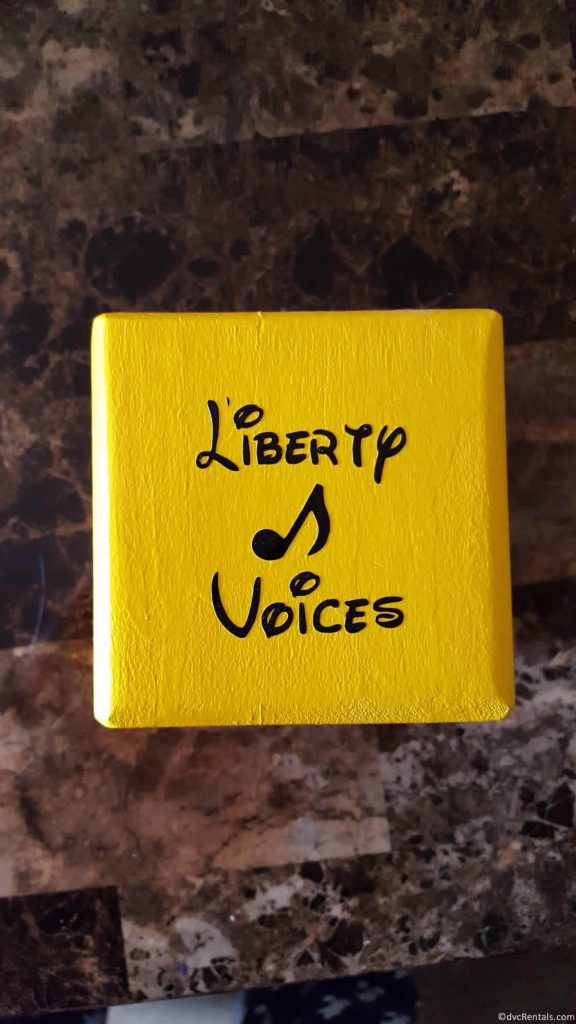 This experience can be enjoyed by all ages.  The building is easily accessible for anyone with mobility issues.  The group will greet guests and shake hands after each performance, smiling as they do so, making everyone feel welcome. A showing of the audio-animatronic show about America, “The American Adventure” follows many performances, but you are welcome just to hear the music and move on if you so desire.  The singing talent of the Voices of Liberty members is unforgettable, especially considering they have only their voices to stay on key, no musical accompaniment.  I am sure many of you have seen/heard this wonderful act, if you have not, I hope this blog has inspired you to give them a listen. I can almost promise you will be glad you did. 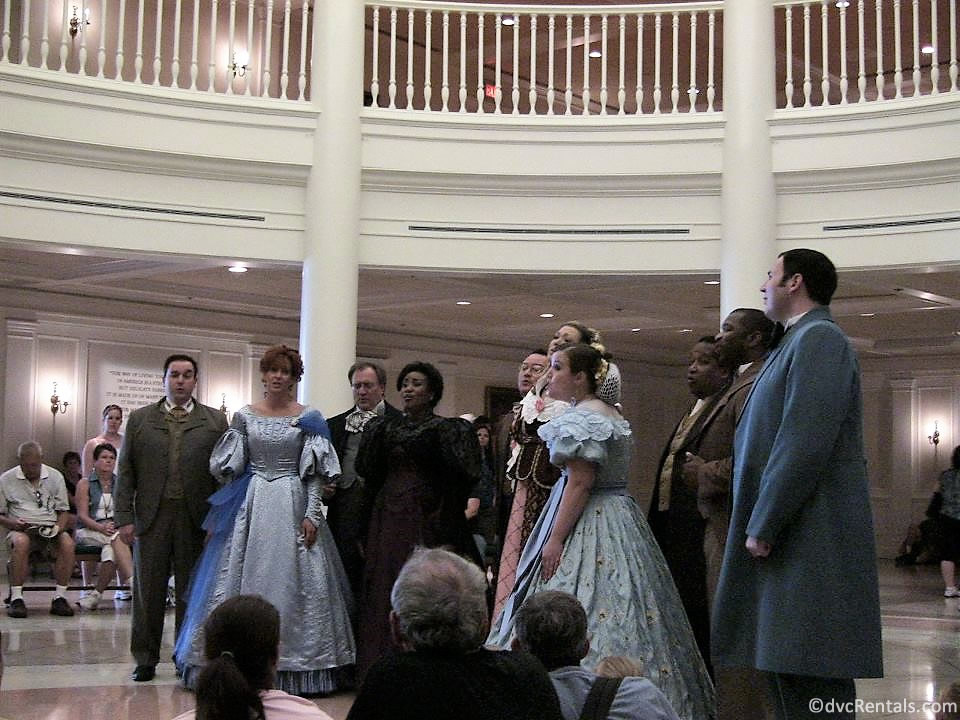