The United States Pavilion at Epcot

Although the United States Pavilion was originally planned to be located at the entrance to the World Showcase, the powers that be at Walt Disney World had a change of heart. Instead, they decided to place the pavilion directly across the World Showcase Lagoon. They felt this would inspire guests to walk all the way around, and encourage them to experience all the countries this section of Epcot has to offer. It’s hard to imagine it anywhere else now. So let’s discuss this pavilion and all it has to offer. 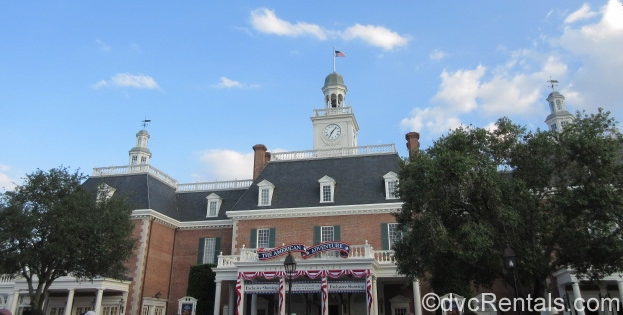 When Epcot opened in 1982 the United States Pavilion was in place from the start. Not a lot has changed through the years; however, there are a lot of things to do at this pavilion and its surrounding area. The main building is built with a Colonial design; you would see buildings like this in the USA in the 18th Century. Inside the building, you will notice that all of the décor (furniture, fixtures, rugs, etc.) is also from the same era.

The walls on the main floor are decorated with a number of Americana paintings, as well as inspirational quotes from many famous Americans, including Walt Disney. The paintings are historic in origin and are beautifully done by talented artists. It’s definitely worth a walk around to check them out up close. 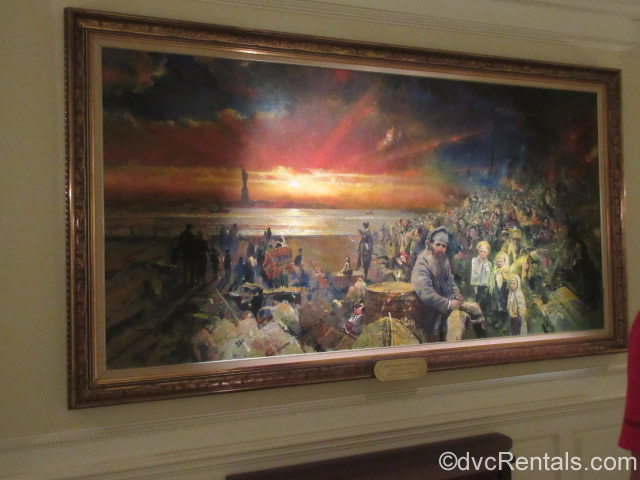 The main floor is also the home to the Voices of Liberty, an amazingly talented a cappella group who sing patriotic tunes as well as American folk songs, such as This Land is Your Land and Skip to My Lou. 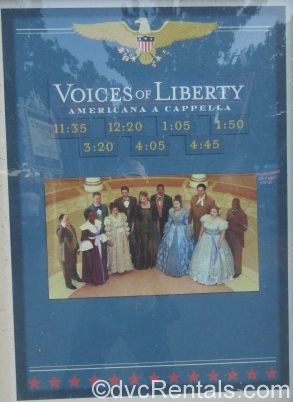 The group dress in period clothing and wigs. They sound wonderful, especially if you stand near them, in the Rotunda section of the building, which has a high ceiling that enhances the music. 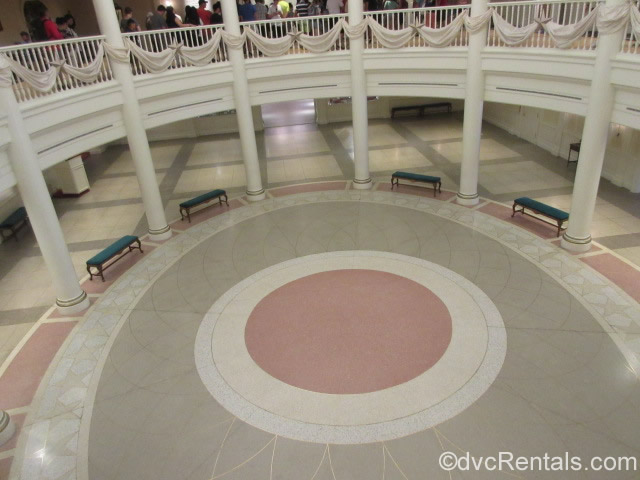 The leader (who can vary, depending on when you go) of the Voices of Liberty will welcome everyone and invite guests to get close to enjoy the sound best. They play multiple times per day, usually starting about 11:15, with the final show about 4:45. This can vary, so check the Epcot times guide when you visit to be sure you don’t miss this excellent act. Fun Fact: I have been told by Cast Members that the Voices of Liberty are considered to be one of the most highly respected roles at Walt Disney World. It is very difficult to be accepted to the group, and once a member, few leave until they decide to retire. 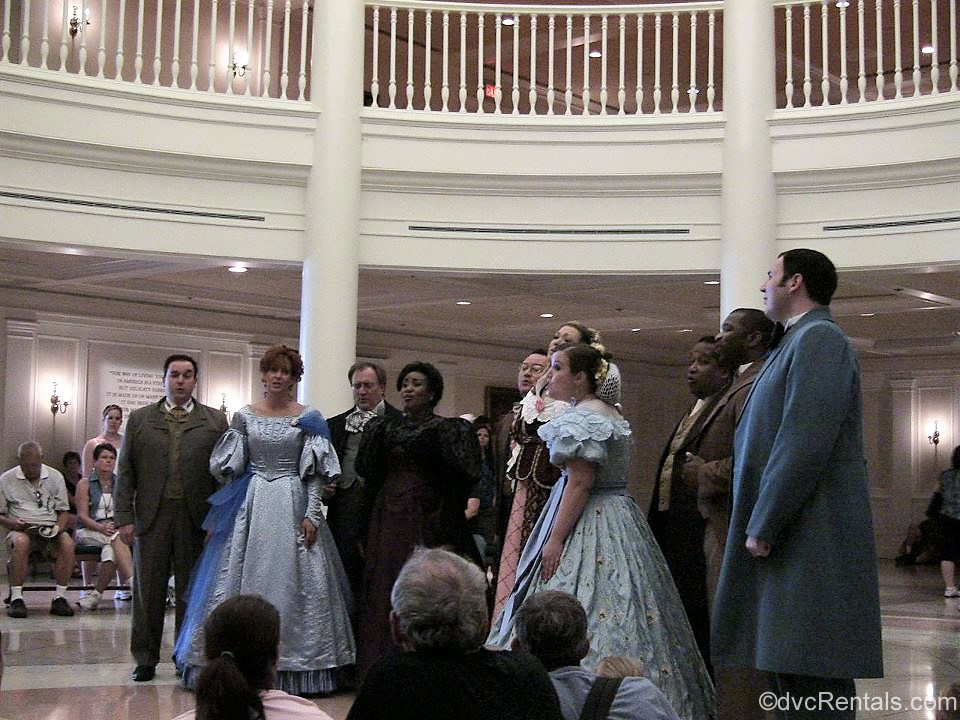 Also on the main floor is an exhibit hall called The American Heritage Gallery. 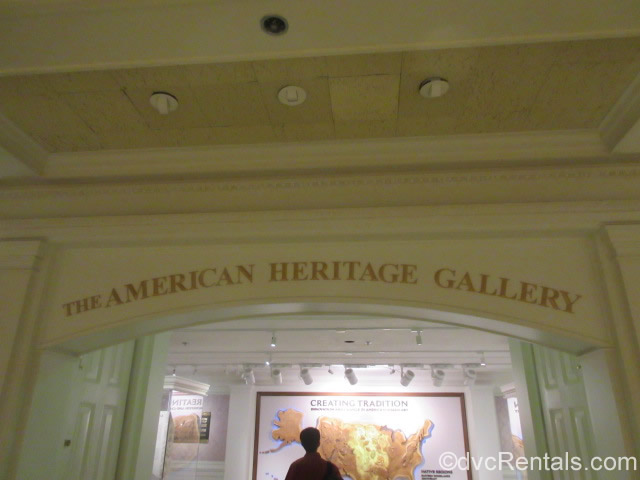 The exhibits in the gallery change periodically, but always have a connection to America. I have seen Abraham Lincoln’s hat as part of one exhibit, heard narrated stories of slaves who fought to be free at another and have experienced a number of other interesting exhibits throughout the years. Currently, the Gallery is showcasing Native American art, not only with paintings and pottery but also with clothing made with beads and other decorative material. 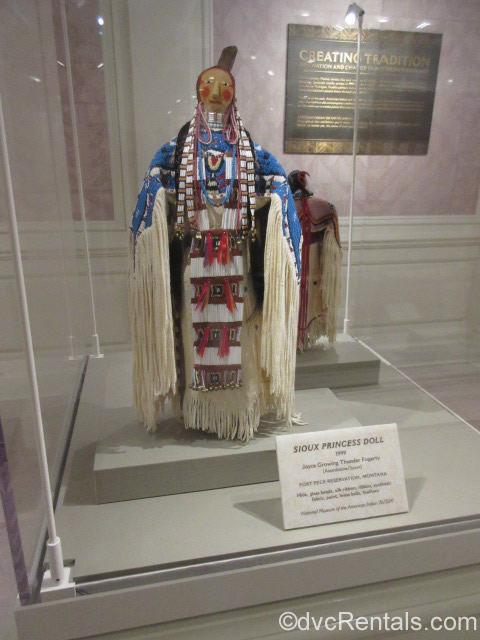 The main attraction in the building is a show called the American Adventure, starring very realistic audio-animatronics of Ben Franklin and Mark Twain. 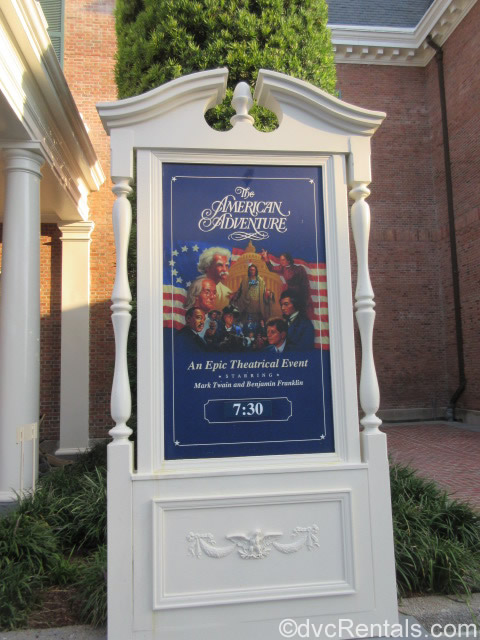 To reach the show, guests walk up a stairway or take an escalator up through an area filled with American Flags from different times of its history. For those who have mobility issues, there is an elevator to take you to the second floor. 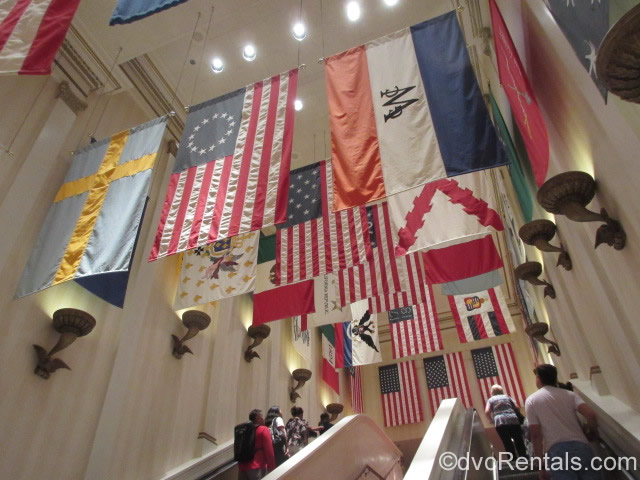 Franklin and Twain discuss the history of America, and as they talk, the show plays. There are historical movie scenes shown on a huge screen, there are many wonderful songs, and there are quite a few famous folks who appear as audio-animatronics in the show, including Chief Joseph, Thomas Edison, Will Rogers, FDR, Frederick Douglass, Teddy Roosevelt, among others. Beginning with the Pilgrims and ending with WWII, the American Adventure is very moving and inspirational. Interesting Fact: Disney always pays attention to details. The start of the movie is all paintings and drawings, as cameras had not yet been invented. It is not until the Civil War when cameras came about that we see actual photographs in the movie. 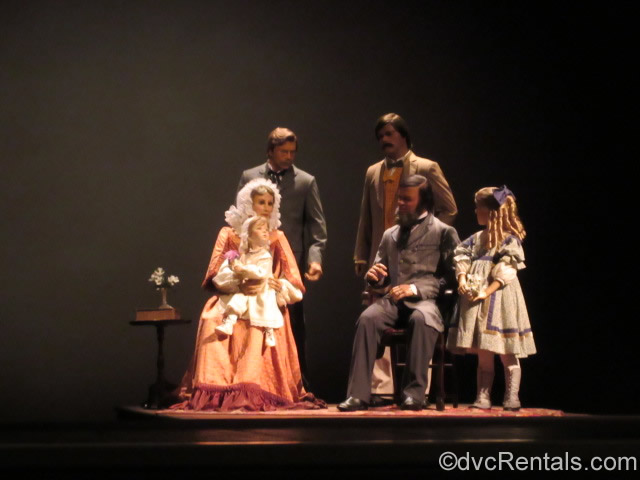 The audio-animatronic scenes move smoothly from one to the other, with a huge machine (kept out of sight from guests) known as the “warhorse” taking down the previous scene and elevating the current one for viewers. Although most of the show concentrates on the positive aspect of the USA, it is not all rose-colored. Slavery, Women’s rights, Native Americans being chased off their land, are all covered in the show.

Once we reach WWII and a final scene with Rosie the Riveter, we hear music well up, and one final song begins, The Golden Dream. The song starts with the words “America, spread your golden wings, sail on freedom’s wind, ‘cross the sky, Great bird, with your golden dream Flying High, Flying High, America”! As the song plays, we see famous Americans appear on the screen for a few seconds each, fading out, and then other well-known Americans fade in. The film has changed a few times over the years, mostly to add people to keep it current. It is longer now than when it first debuted. They have also removed some people who are less well known now.

I find the song and pictures very touching and have been moved to tears more than once while experiencing it. When the movie ends, Franklin and Twain say a few words and wave goodbye, as we see statues symbolizing American ideals light up along the sides of the theatre. A heads up: This attraction is long, just under 30 minutes. So if you’re in a hurry, come back when you have more time. You can leave during the show by exiting the doors on the right, but the door will remain open for a time, and the bright light that hits the theater may be disturbing to other guests. Lastly, the theater is huge, Fast Pass is not offered nor is it needed for this experience. 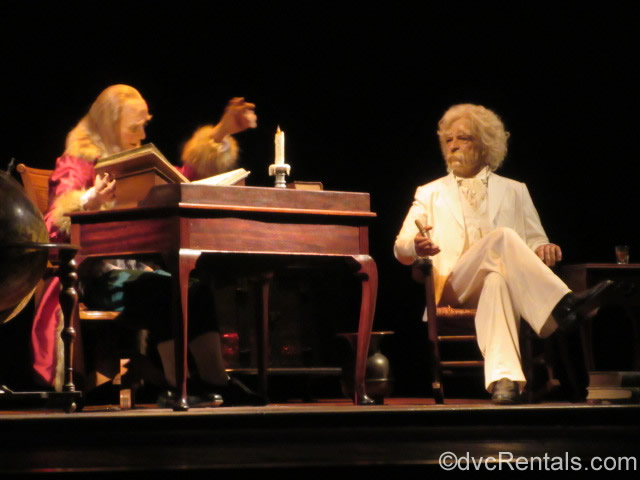 If you are facing the building, to the left was a fast food restaurant called the Liberty Inn. 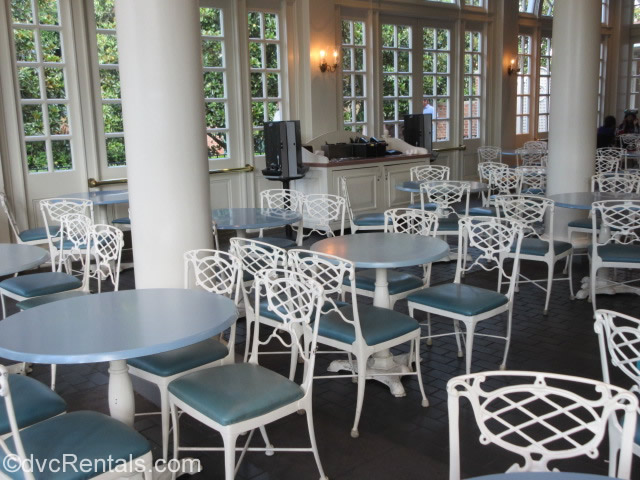 It was your basic theme park fare.  However, this will soon change; a new barbecue restaurant is slated to open in the near future.  Most guests are very happy to learn of this change, as so many of the other pavilions in World Showcase have terrific restaurants, many feel it is about time that the USA had something a bit nicer than has been there until now. Not many details have been released about the new eatery at the time of this writing, other than it will feature barbecue and will have both indoor and outdoor seating areas.  Additionally on the left, if you are facing the US Pavilion, is a kiosk called Fife and Drum Tavern. It’s in front of the pavilion, on the path that goes around World Showcase lagoon. They offer beer, wine, root beer floats, a variety of cocktails, soft drinks, slushies, ice cream, and turkey legs. 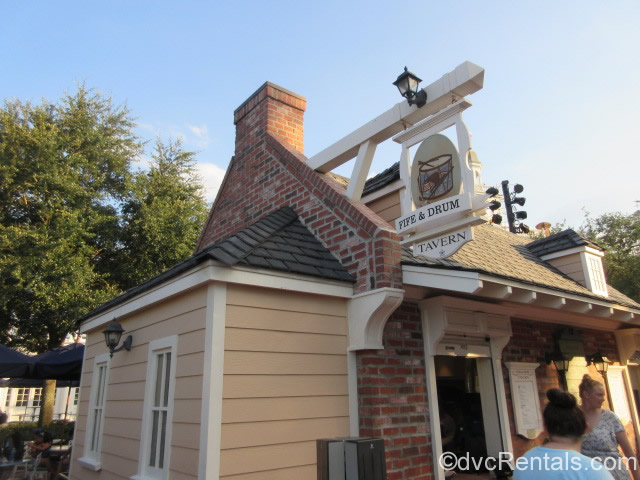 If you are facing the building and go right, there are a number of areas to notice. First, there is a small shop called Heritage Manor Gifts. Although it isn’t large you will find some unique American gifts here (most everything is the color of the flag, red white and blue), as well as a penny press machine and a nice selection of Alex and Ani bracelets. To the right of the store is a Kidcot area to entertain the younger Mouseketeers, and during the winter holidays, you can meet Santa and Mrs. Claus in the same area. There’s also a very large restroom on this side of the building, built not too long ago, it’s much larger and nicer than the one that is on the opposite side. 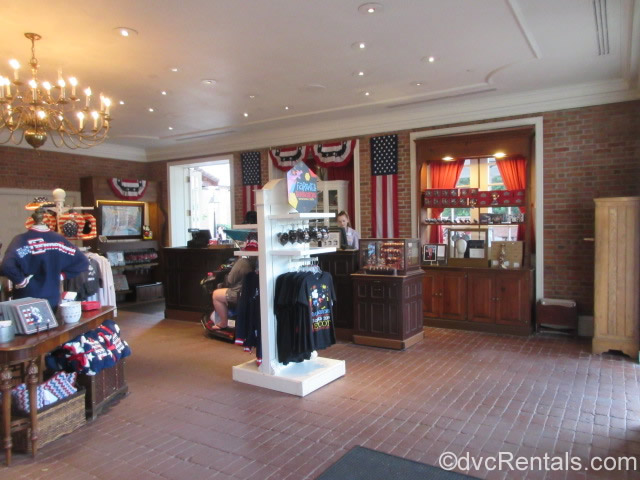 Fun Fact: There are other floors in the United States pavilion, but they are not accessible to all guests. For many years during the Food and Wine Festival in the Fall, there was a lounge for Visa cardholders on an upper floor. Free soft drinks were available for Visa members, as well as places to charge cell phones, along with a nice view of World Showcase below, and Spaceship Earth across the lagoon. Recently Club 33, a private member club, took over the spot the Visa Lounge once occupied. It was redone in a new design for Club 33. Details about Club 33 are available only to members of the Club.

There is one more part of the USA pavilion we have not yet discussed, the American Gardens Theater. Located on the water of the World Showcase Lagoon, opposite the entrance to the pavilion, this theater is home to quite a number of musical performances. 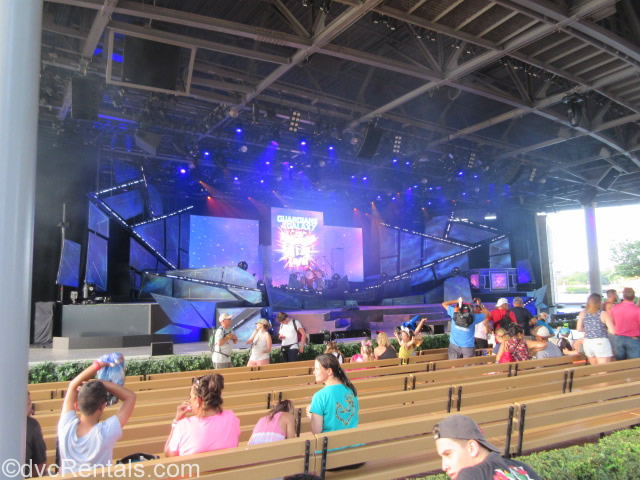 In the Spring, during the Flower and Garden Festival, guests can see (at no additional charge), various famous rock and pop bands at the Garden Rocks Concert Series, formerly called the Flower Power Concerts. The acts can differ from year to year, but some have been playing for quite a while, i.e. Herman’s Hermits have been there yearly for a long time. You can look at the official Disney site online to see who is playing on what dates if you are visiting that time of year.

Once the Flower and Garden show ends, other performers take the stage. For a while there was a series called Sounds Like Summer, which was consisted of excellent cover bands, my personal favorite being Big Shot, a Billy Joel tribute band. Others included tributes to the Eagles, Springsteen, Journey, Fleetwood Mac, and more. In the last couple of years the summer act has been based on Guardians of the Galaxy. Some of the characters from the series appear, along with a rocking band that plays songs from the 70s and 80s. The performance is dramatic, with lots of “smoke,” strobe lights, and even bubbles.  Baby Groot is part of the show too!

The Fall brings the Epcot International Food and Wine Festival, and the Eat to the Beat Concert Series to the America Gardens Theater. Similar to the Garden Rocks, bands perform here in the evening, there are generally 3 shows per night. Also similar to Garden Rocks, some performers are new, and others have been appearing for years. A highlight for many is Big Bad Voodoo Daddy, who have been a staple for a long time.

The final performance for the year at the America Gardens Theater is the Candlelight Processional, adored by many. This takes place during the Winter holiday celebration at Epcot and consists of various celebrity narrators reading the story of Christmas, surrounded by a huge chorus who sing Christmas Carols such as Joy to the World and Silent Night. Originally in the Magic Kingdom, the Candlelight Processional moved to the America Gardens Theater in 1994. Disney offers dinner packages that guarantee seating, and there is also a stand by line for the show. Some narrators, such as Neil Patrick Harris, are virtually impossible to get a seat for unless you buy the dinner package. However, the stage is visible if you stand in front of the American Adventure, and while you may not have the best view, you can see everything, and you can hear all the music.

Although it’s just one pavilion, as you can tell from this blog, there is enough to do here to keep you busy for quite some time. It may not be possible to do and see all you want in one visit. If you are a history buff, you will love this pavilion. But even those who may not have a great fondness for American History will more than likely find the pavilion very interesting and entertaining. Like so many Disney attractions, it’s meant to be fun as well as informative, and in my opinion, it succeeds beautifully. 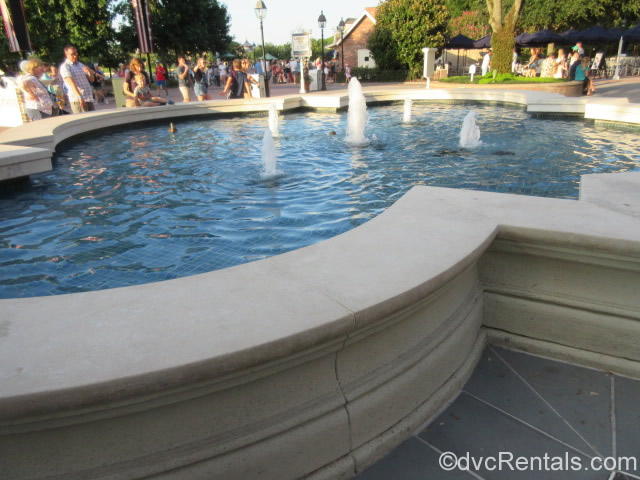