In 1996 I was with my husband and two daughters walking in the breezeway towards what is now Mission Space in Future World. Seemingly out of nowhere, three custodians appeared rolling trash cans on wheels. They came to a stop, and suddenly one (Paul, more about him later) yelled out, “Break Time!” 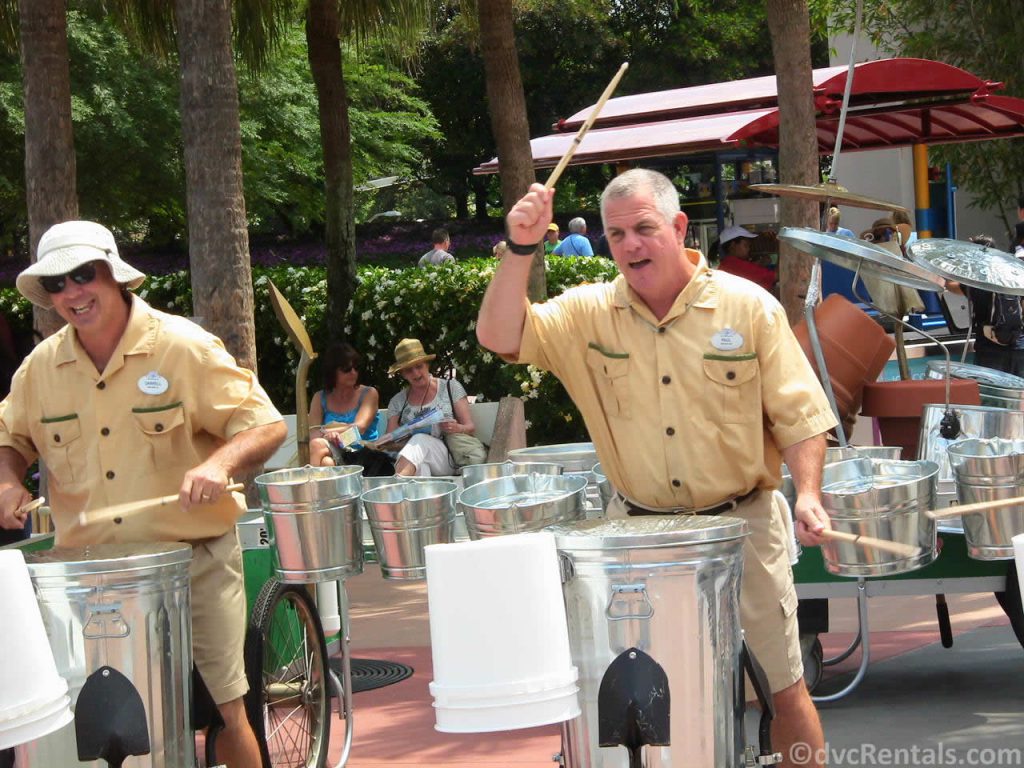 Before our eyes, the trash cans became drum sets! They proceeded to use the lids and the sides of the cans to make different drum sounds, they were amazing to watch and listen to. As they played, they kept up an amusing banter that us guests laugh. For example, they were lined up all three in a row, and the two JAMMitors on the end would suddenly, mid-song, take turns playing drums on the head of the JAMMitor in the middle (not to worry, they had on hard hats). There was even audience participation! They would do a drum beat, and then Paul would point with his drumsticks at key moments, and we all had to go “HuH” in unison. 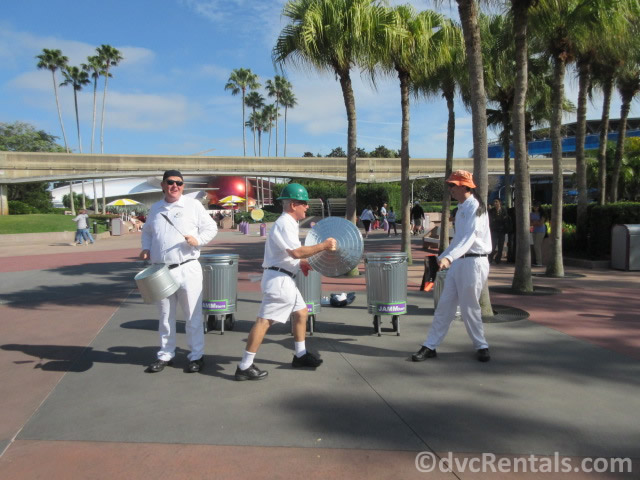 Well, they weren’t custodial staff at all; they were a very talented and fun group, who still played daily when Epcot was last open. They are called the JAMMitors, clearly a play on words due to them looking like janitors as they jam on their “drums.” These three faux custodial engineers put on a rip-roaring show that’s fun for the whole family. I happened to luck out and see them the year the first debuted, so there wasn’t much buzz about them back then. It was a great surprise to stumble across this great act.

After that, we made a point of seeing the JAMMitors each time we visited Epcot. My kids are grown, I am no longer married, but the JAMMitors are still a tradition for me. Some of the shenanigans from the original show remain, but they have added things as the years have gone by. Instead of just trash can lids, they have metal buckets they also use as drums now to increase the ability to vary the sounds. 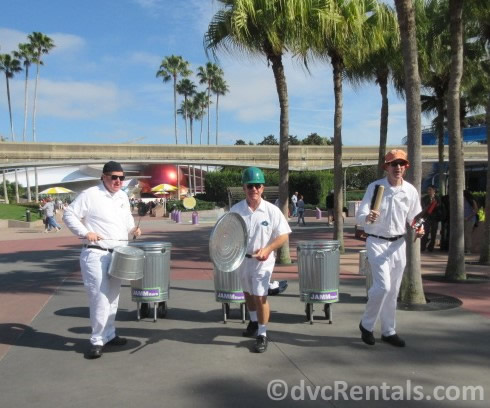 Additionally, during the Epcot International Food and Wine Festival, for a number of years, they have been using “ovens,” they roll out onstage to make drum music with. They are called the Jammin’ Chefs during the festival, they dress like chefs, and the banter is all food-related. 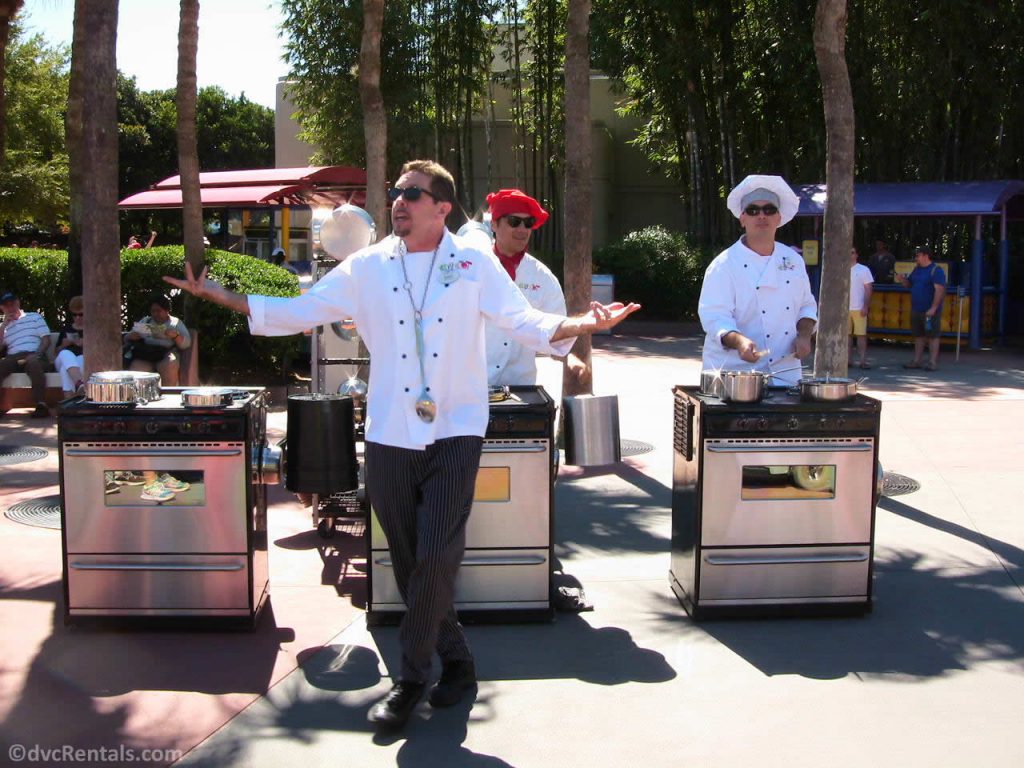 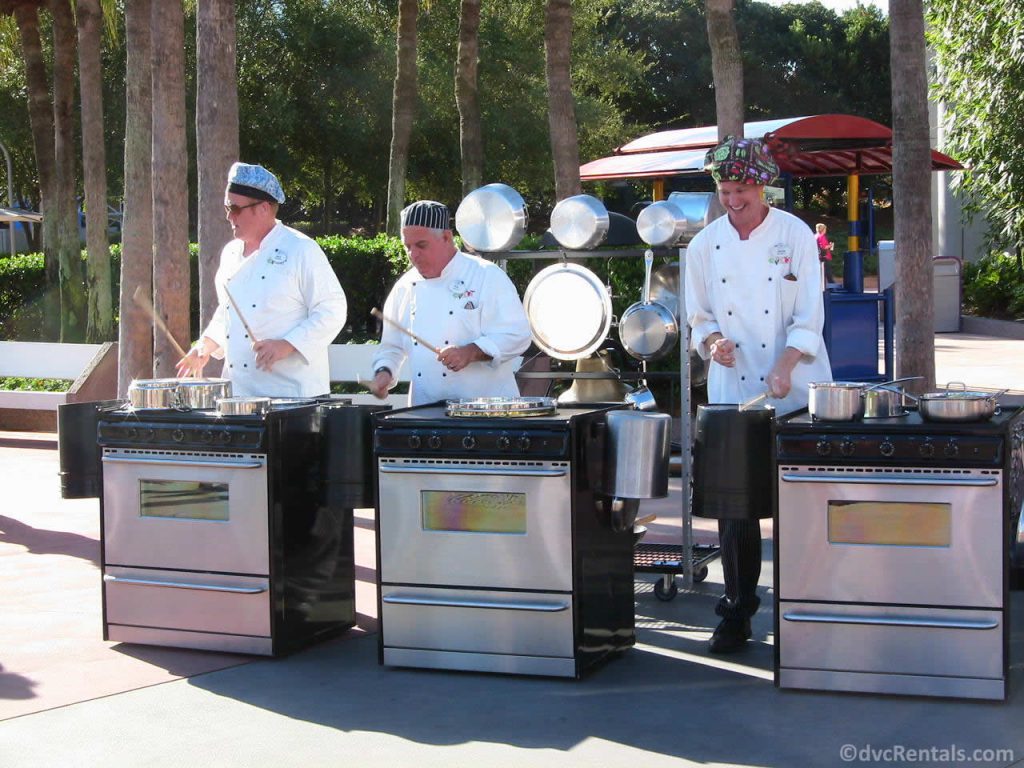 During the Epcot International Flower and Garden Festival they bring out shovels, recycle-style trash cans, and upside-down plant pots, which they use as drums, and yes, you guessed it, the banter is about gardening. 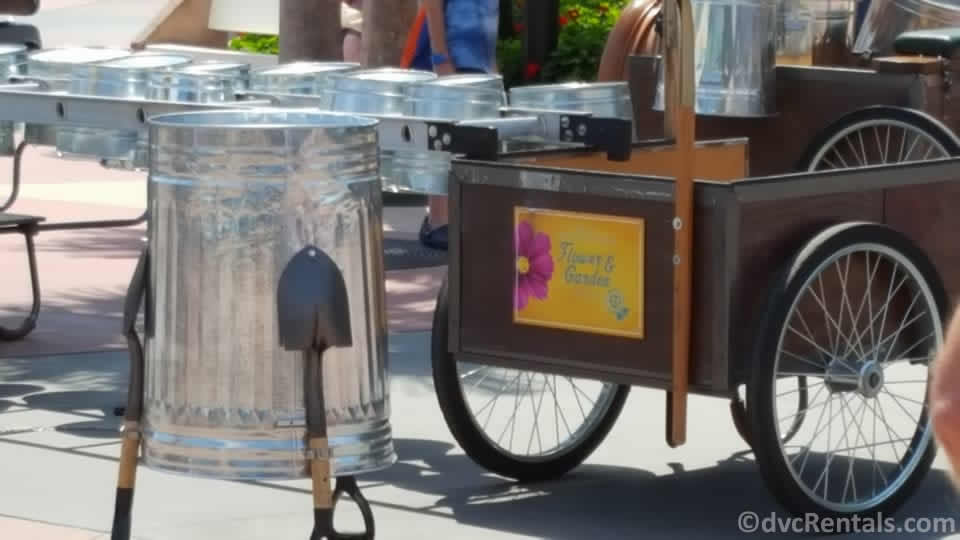 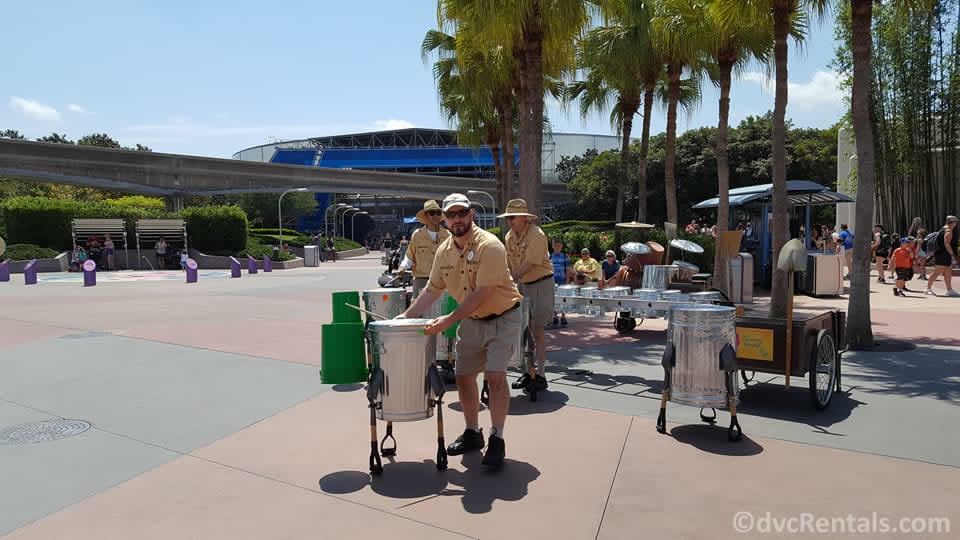 While I have mentioned some of the pieces they use to perform with, it’s truly astounding how the JAMMitors can take almost anything and make it into a drum. Tin cans, brooms, pot lids, and even their own hands: they clap in unison with a drum-like beat.

To find them, as I mentioned earlier, the group sets up just outside the breezeway going towards Mission Space. The shows last about ten minutes, and there is basically no limit to how many people can enjoy the performance. In general, they don’t play to a packed audience, and you will be able to see as well as hear everything. If it is very busy, you might not have a great view of all their antics, if you are in the back, you will be able to hear them for sure. In fact, that’s one heads up I think I should share. If you or anyone in your party is sensitive to loud noise, the JAMMitors are not a good choice. They are loud. 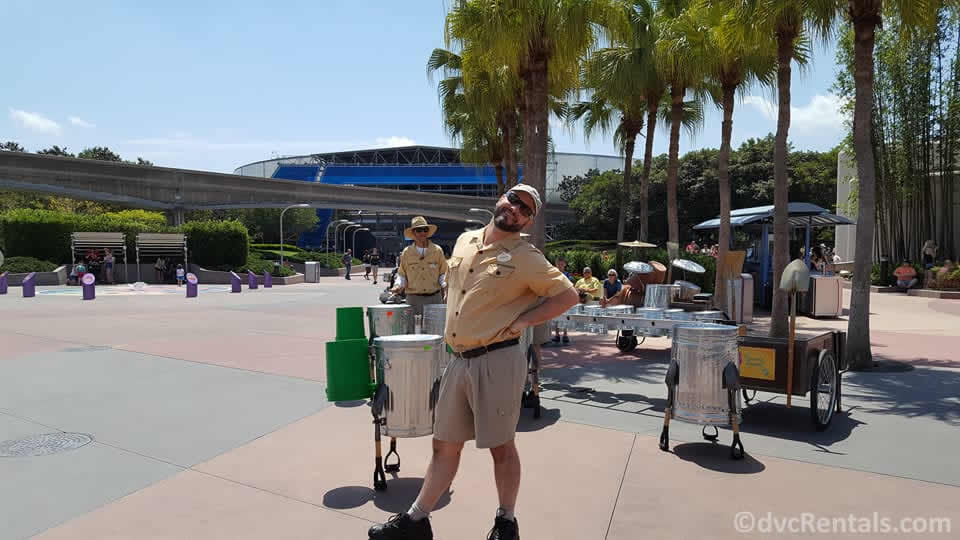 It’s fun to see them set up, so if you plan to enjoy the group (assuming they will return when Epcot opens, or soon after), grab a times guide when you enter the park. The JAMMitors show times will be listed under Future World in the guide, and if you get there a couple of minutes early, you can watch them get ready. Last time I was there, the first show began at 11:15 and the last one 3:30, with 3 additional shows in between.

Fun Fact: If you are lucky, sometimes the JAMMitors do a “bonus” show just before park opening. I don’t know how it’s decided, but they will roll on up and do their act for guests waiting for the park to admit them. I have only had this pleasure twice; it sure makes the wait enjoyable.

After their shows, the members of the JAMMitors will usually stick around for pictures and autographs. They hand out Junior JAMMitor stickers as well, which are adorable. Don’t worry about being “too old” to get one; we are all kids at Walt Disney World! 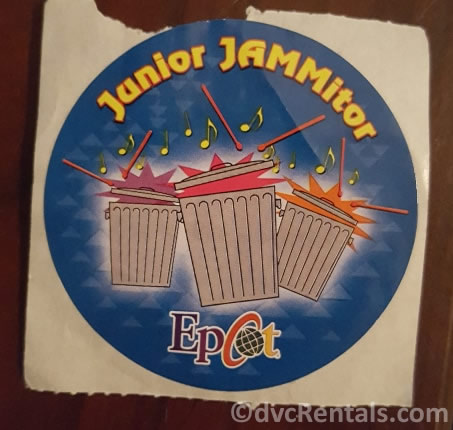 Quick personal note: When I worked at Mouse Gear, sometimes I was assigned to be a greeter in the breezeway near the JAMMitors. I loved it when they were playing; it would inspire me to dance around more as I greeted guests walking by or entering Mouse Gear.

As mentioned earlier, I have to spotlight the lead JAMMitor, Paul. Prior to the JAMMitors, from 1982-1990, Paul was part of Future Corps, a drum and bugle band who played at Epcot. He then became a member of the Caledonia Bagpipe Trio at the Canadian Pavilion in World Showcase before the role with the JAMMitors.

Paul is the only member of the band who has remained with them since they debuted. I completely remember him from the first time I saw him in 1996; his personality really stood out. I would always look for him through the years, and it pleases me to no end that he never left the role. For me, Paul remains the heart and soul of the JAMMitors. 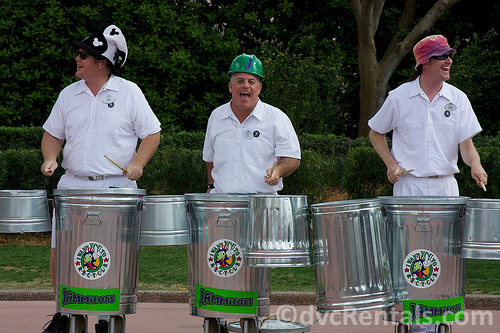 The energy this man puts out is amazing. I am always so impressed that after doing 5 shows a day for 5 days a week for 24 years that Paul never looks like he is phoning it in. He keeps each and every show fresh, and he never waivers in his enthusiasm. If I had to choose my very favorite Cast Member, I would probably pick Paul. He really embodies the Disney Spirit IMHO. Paul is so well respected that he was sent to both Tokyo and Hong Kong Disneyland, to train Cast Members in the JAMMitor role in those parks. Quick FYI: The JAMMitors play every day, but of course, Paul gets two days off, so there is a chance he may not be there the day you visit.

I am sure many of you reading this are already fans of this fun and very talented group. If you have never seen them, I hope you get a chance someday; they are most certainly worth ten minutes of your time. 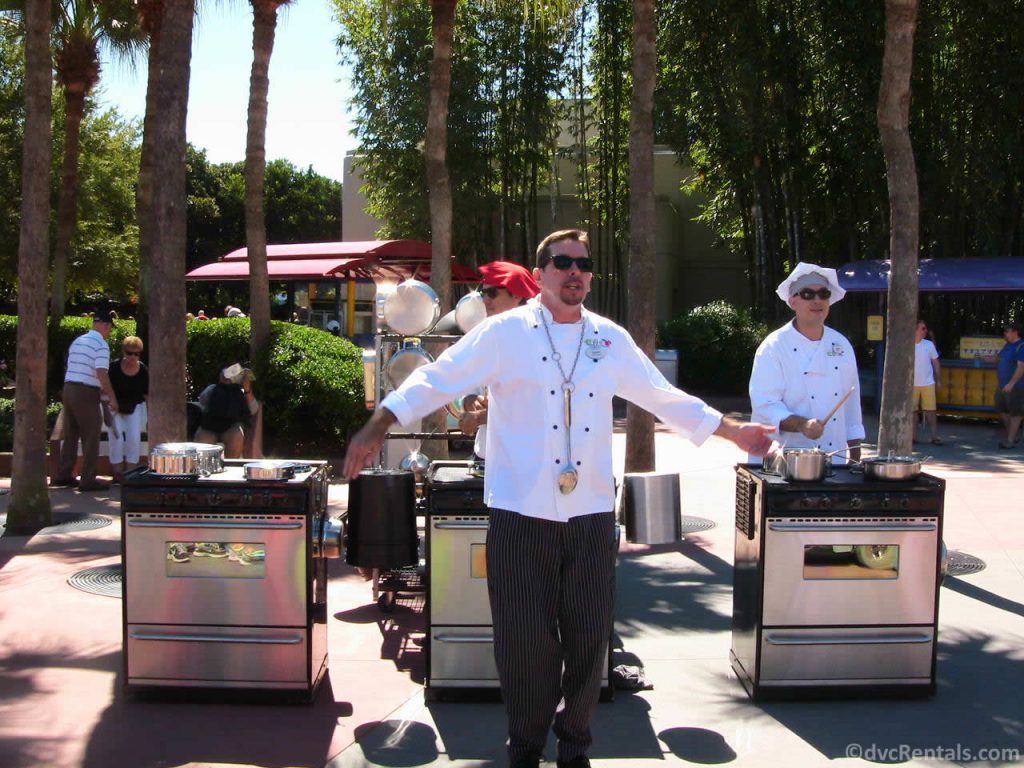 The shows are included with park admission; there is no additional fee. But wait! Perhaps you’d like to see them now? And perhaps they did a special show during the pandemic so we can enjoy them from home? They sure did, here is a link to enjoy them live at home, using their creativity to make music using instruments out of things around their homes. In case you are wondering, Paul is the one with the white hair: 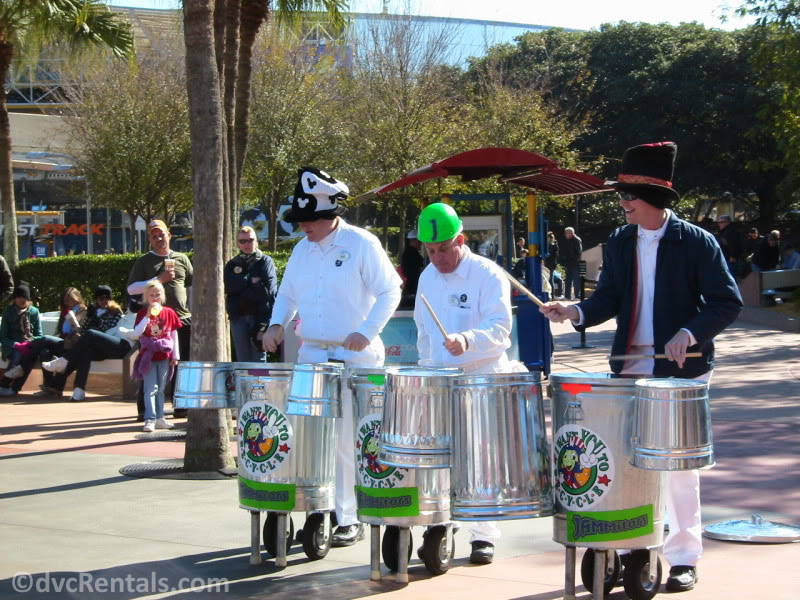