The History of the Haunted Mansion

Welcome, foolish mortals. This year marked the 50th anniversary of Disneyland’s Haunted Mansion Attraction. Since opening on August 9, 1969, the Haunted Mansion has become one of Disney’s most popular attractions. 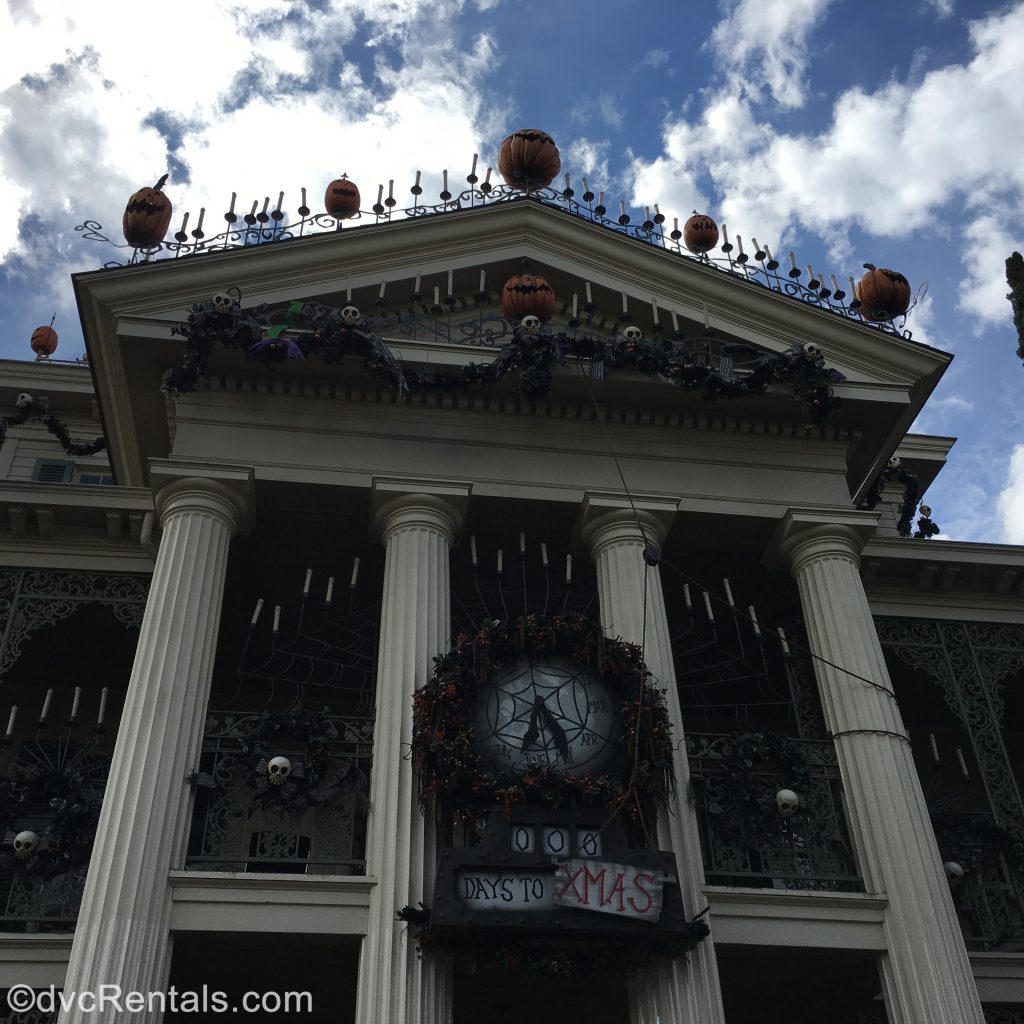 In celebration of 50 years of happy haunts, both Disneyland and Walt Disney World released exclusive snacks, merchandise, and PhotoPass experiences for everyone to enjoy. Being one of my favorite attractions, I decided to take a deeper look into Haunted Mansion, past what can be seen from the Doom Buggy.

Haunted Mansion was not one of the opening day attractions in Disneyland; however, Walt had wanted a haunted house in his park long before opening day. Between multiple Imagineers and Walt himself, the idea for Haunted Mansion changed quite a few times before the final concept had been decided.

In the early stages of planning, the Imagineers pitched the idea of an old, dilapidated building where the guests would take a guided walking tour in small groups through the haunted house. Walt was not fond of this idea as he did not want an old, run-down building in the middle of his park. His thought was that a nice, well-kept home would be better suited to fit the theming of the park.

The idea of a walk-through haunted house was also taken off the table as this gives guests more opportunity to see things the Imagineers would rather have hidden. That is why developers eventually decided on the Omnimover with the Doom Buggies. The Omnimover allows carts to be moved one way or another, allowing the Imagineers to manipulate guests into only seeing what they want them to see, while the overhang on the Buggies can shade from what should not be seen.

The Doom Buggies also had a specific purpose based on their size. In an attempt to make things as solitary and frightening as possible, the Imagineers wanted the Doom Buggies to only fit one to three people. This is to create the illusion that you are traveling alone on your journey into the mansion. 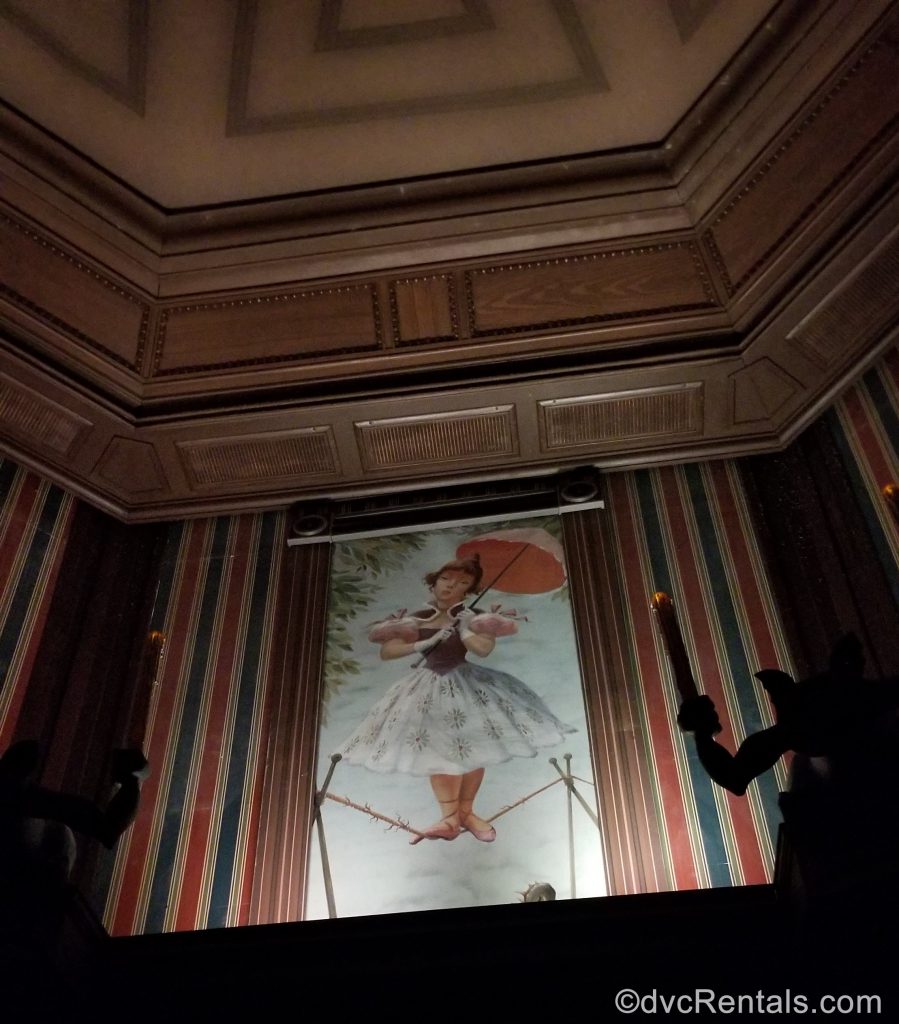 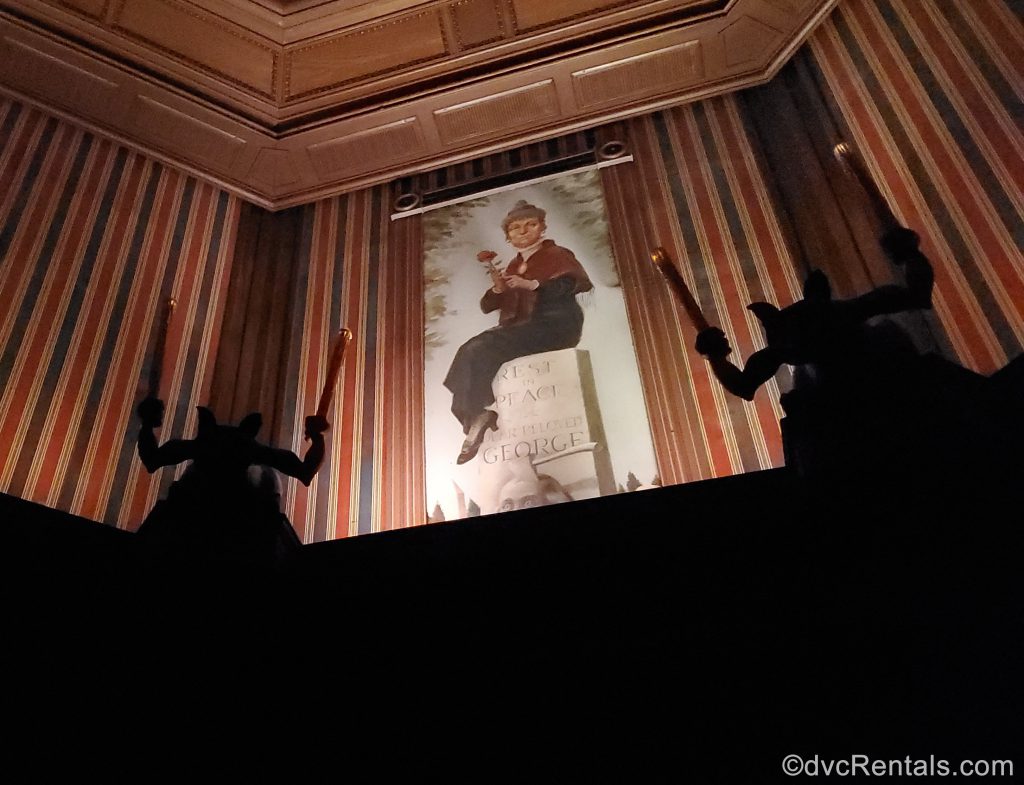 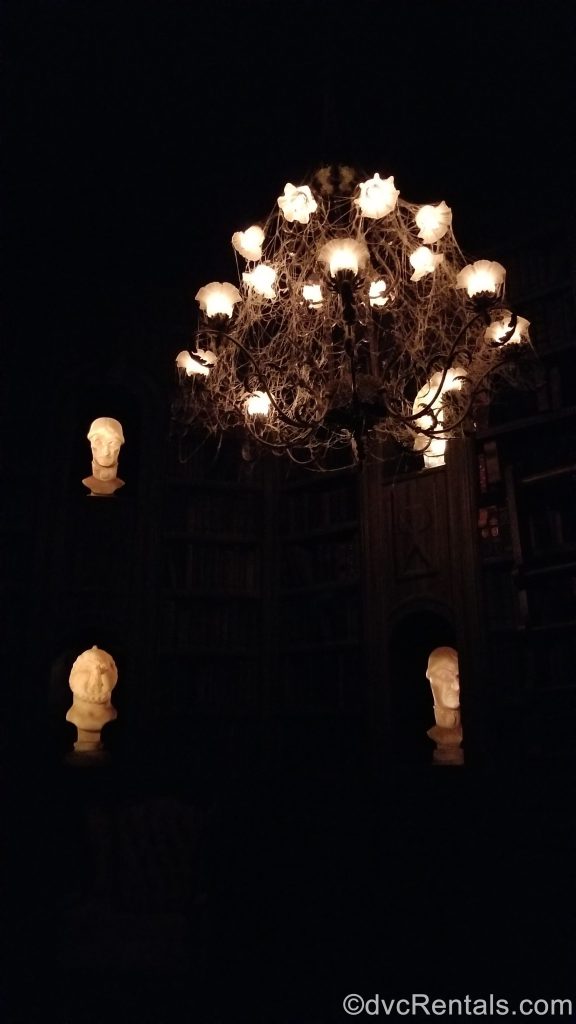 The specific illusions used in the Haunted Mansion are all uniquely interesting, but I thought I would highlight one of my favorites.

One of the most iconic scenes in the Haunted Mansion is the Birthday Party. As happy haunts begin to materialize for the party, we can see the ghosts pop in and out of view while looking both down below and above the Doom Buggy. The appearance of ghosts and ghouls is achieved solely by using a magic trick called Pepper’s Ghost. 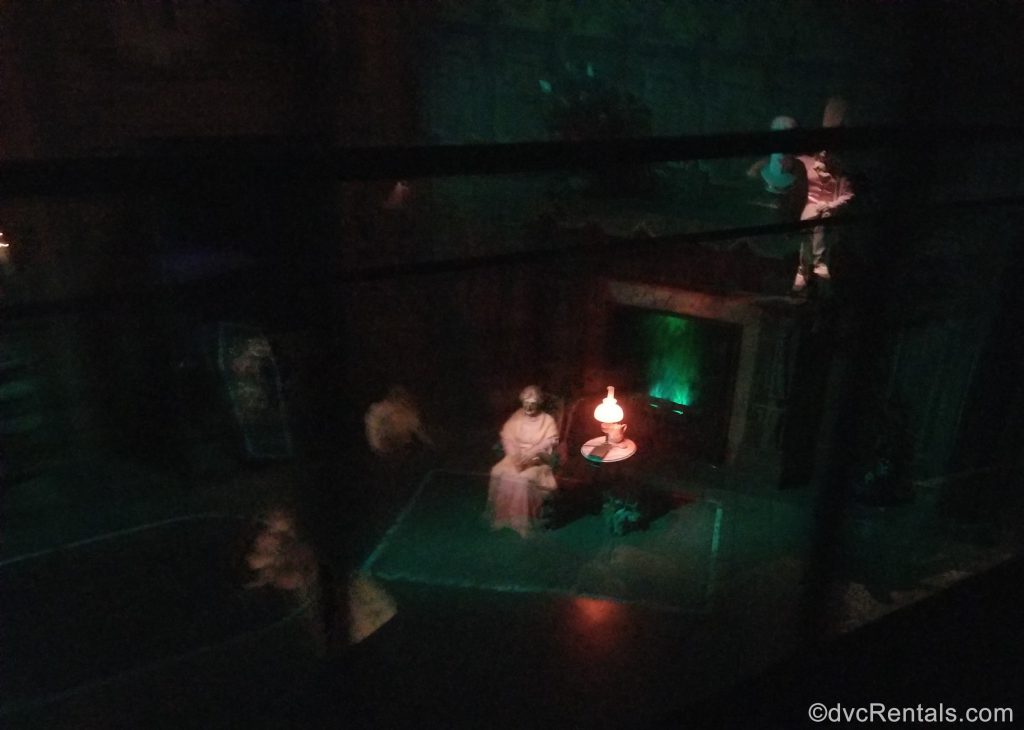 If you are thinking to yourself, “Pepper’s Ghost? That sounds familiar?” that is because it can be found featured in a few other attractions around Walt Disney World and Disneyland. As well, it is the name of a drink at AbracadaBar on the Boardwalk!

Pepper’s Ghost is a magic trick that was created and patented but is rarely used in magic shows anymore as you need to build a specific theater so that you can perform the trick. This is not convenient for magicians but is very convenient for Imagineers who are building the rides that use this illusion.

Without giving away too much information, Pepper’s Ghost is an extremely simple concept in comparison to how complex and realistic the ghosts actually look. It uses a very clean pane of glass and spotlights to create the appearance of ghosts popping in and out of view.

Underneath and above the Doom Buggies, there are animatronics painted bright white in a pitch-black setting. When the spotlight is set on the animatronics, their reflections are cast through the glass, making it look as though ghosts have appeared in front of your eyes.

As I stated before, this trick can be found on other rides in Walt Disney World and Disneyland. It can be seen on The Many Adventures of Winnie the Pooh, Tower of Terror, and Pinocchio’s Daring Journey.

Another interesting fact about the Haunted Mansion is that, in the mid 1980s, Disney tested live actors throughout the ride. This consisted of actors dressed as knights in armor that would standstill, and, as your Doom Buggy turned toward it, a knight would reach out and grab you. This concept was tested because the Imagineers thought this added another scary element to the ride. As I am sure you can guess, this did not last long as families complained it was too scary for small children. 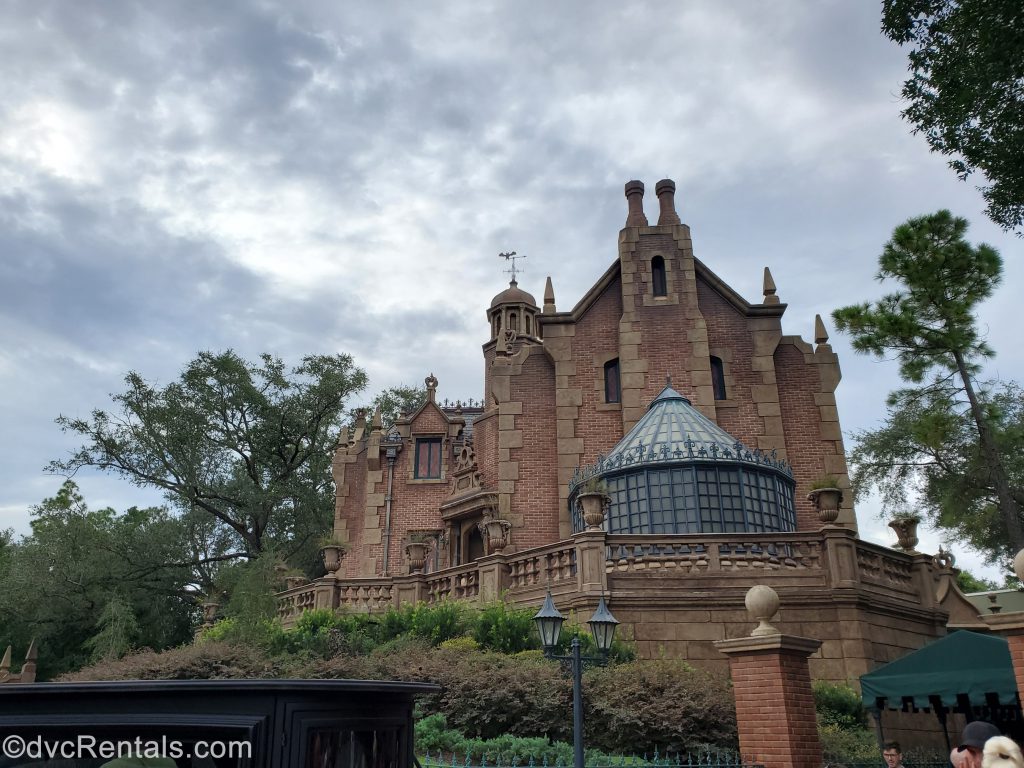 Disneyland has even introduced “Haunted Mansion Holiday,” a seasonal update to Disneyland’s Haunted Mansion. During fall and winter, Jack Skellington and his pals visit the Haunted Mansion in an imaginative retelling that combines The Nightmare Before Christmas characters with the Grim Grinning Ghosts we have come to know and love. 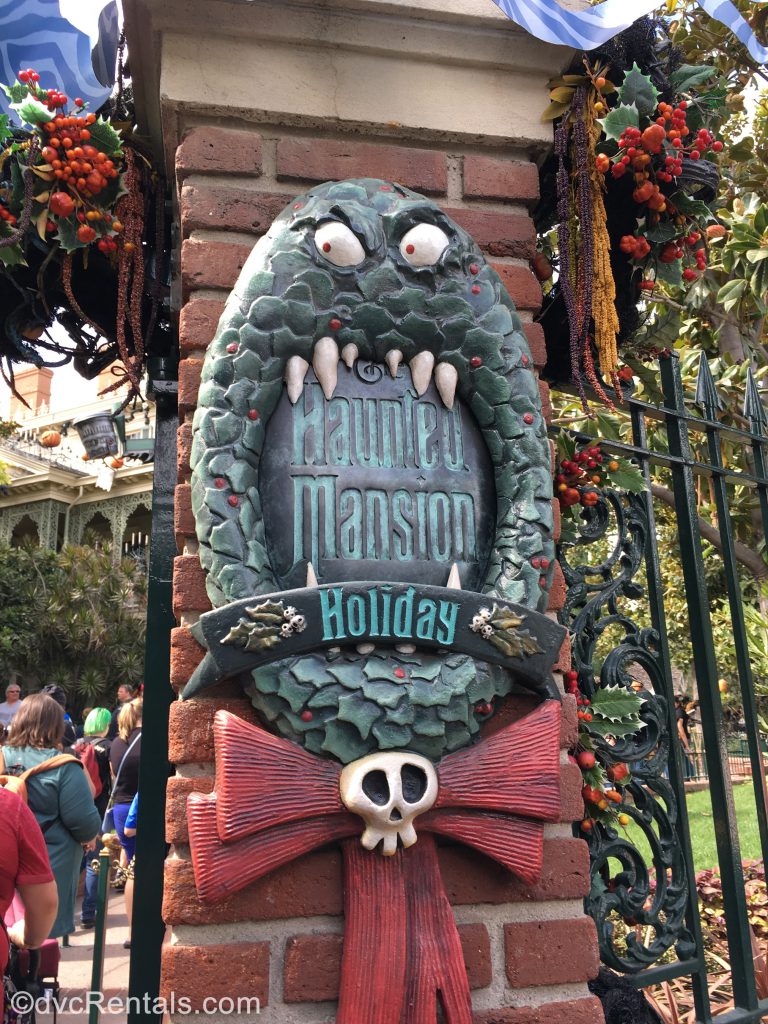 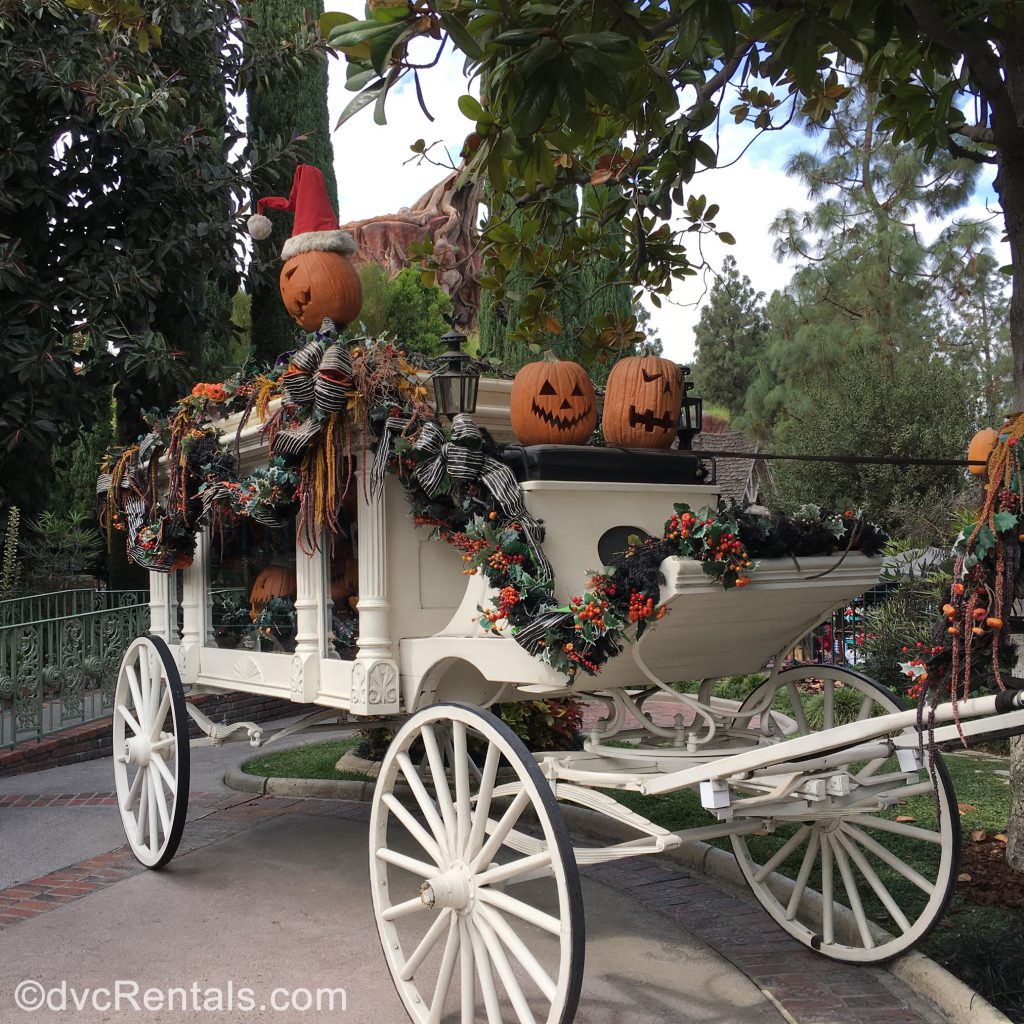 Over the past 50 years, the Haunted Mansion has made many changes. From the Bride to the Hatbox Ghost to my personal favorite, Madame Leota, Disney has made many updates to the ride while still keeping the theme spooky, yet satisfying. 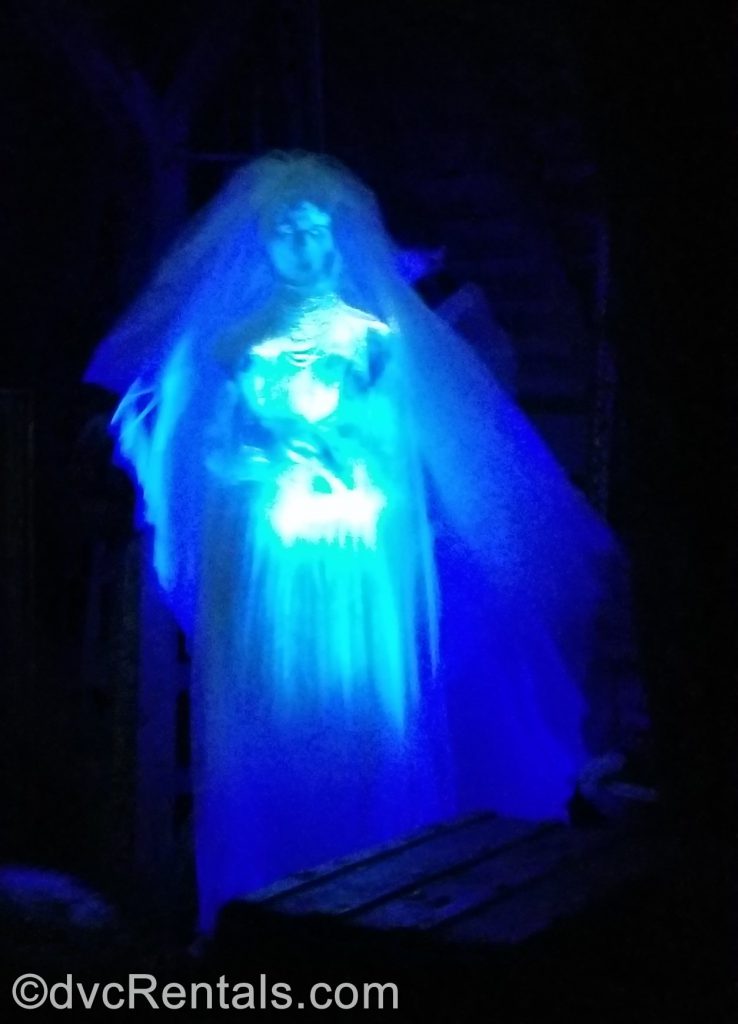 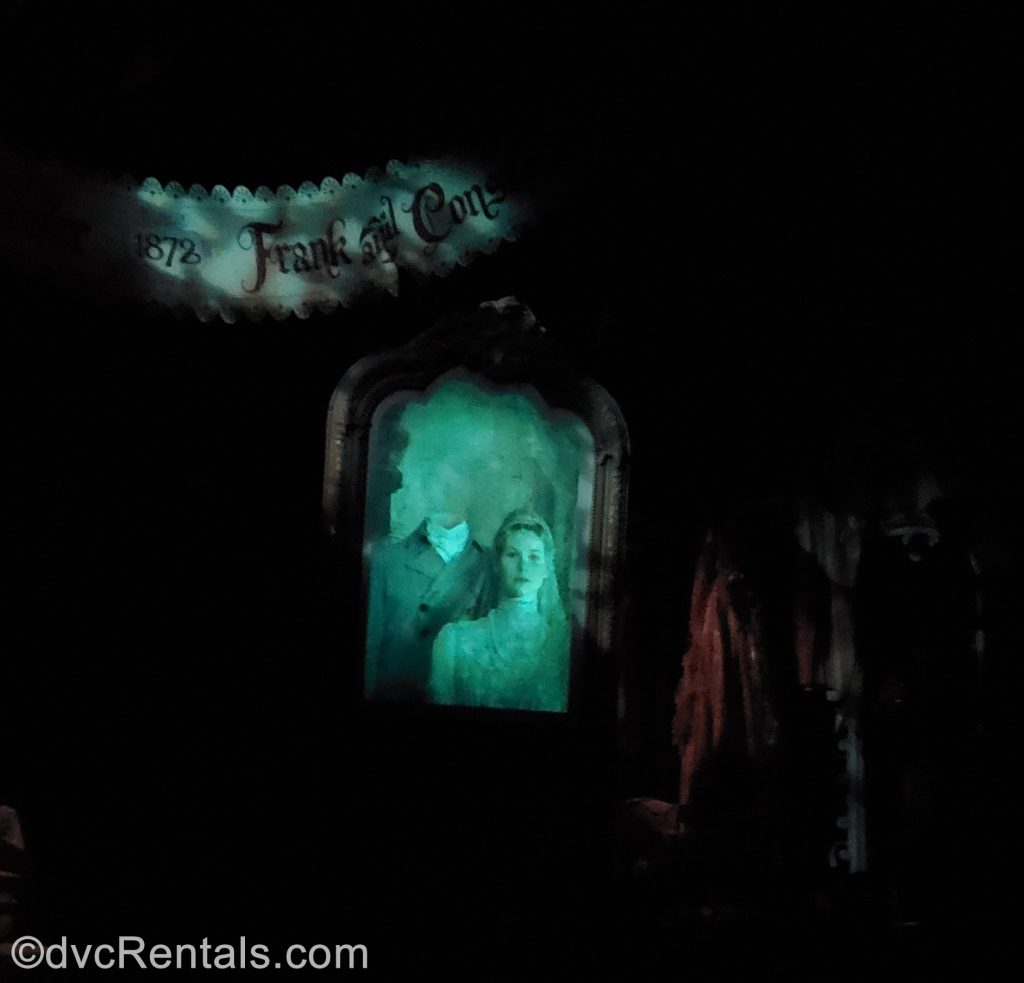 Disney has even added in little touches in the queue of the ride to bring the haunted mansion together. 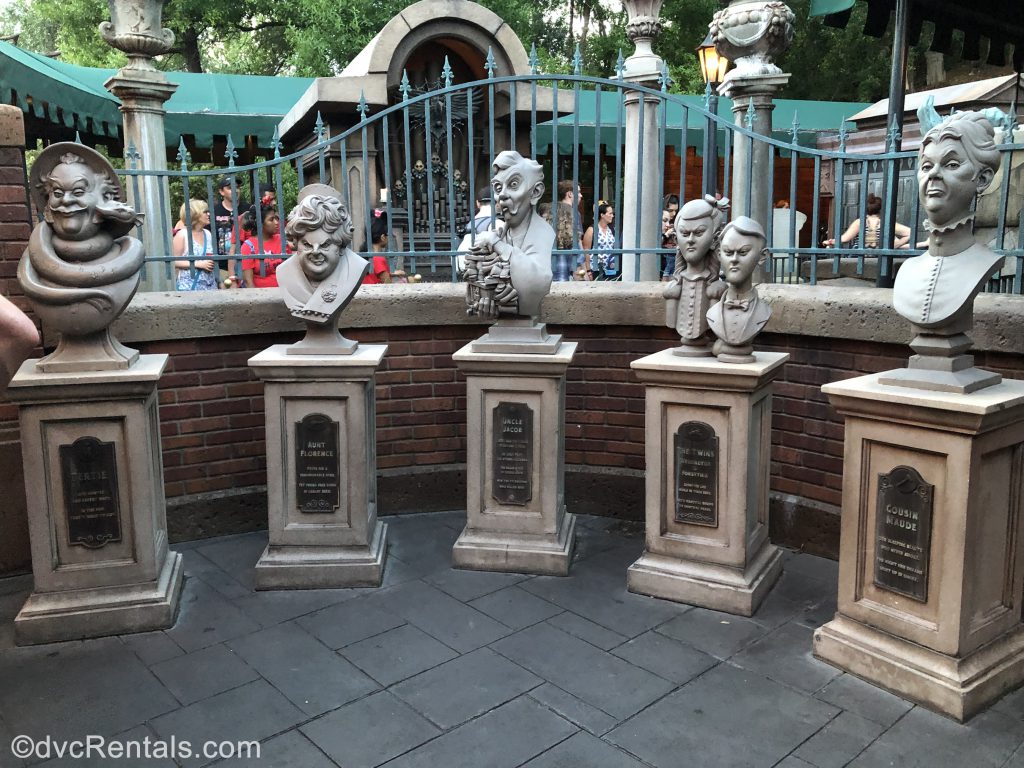 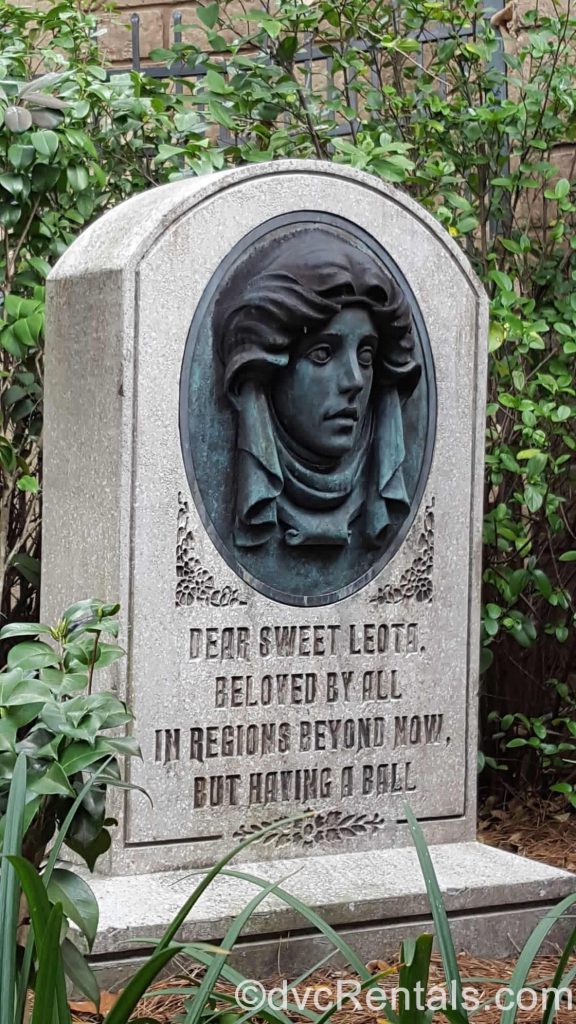 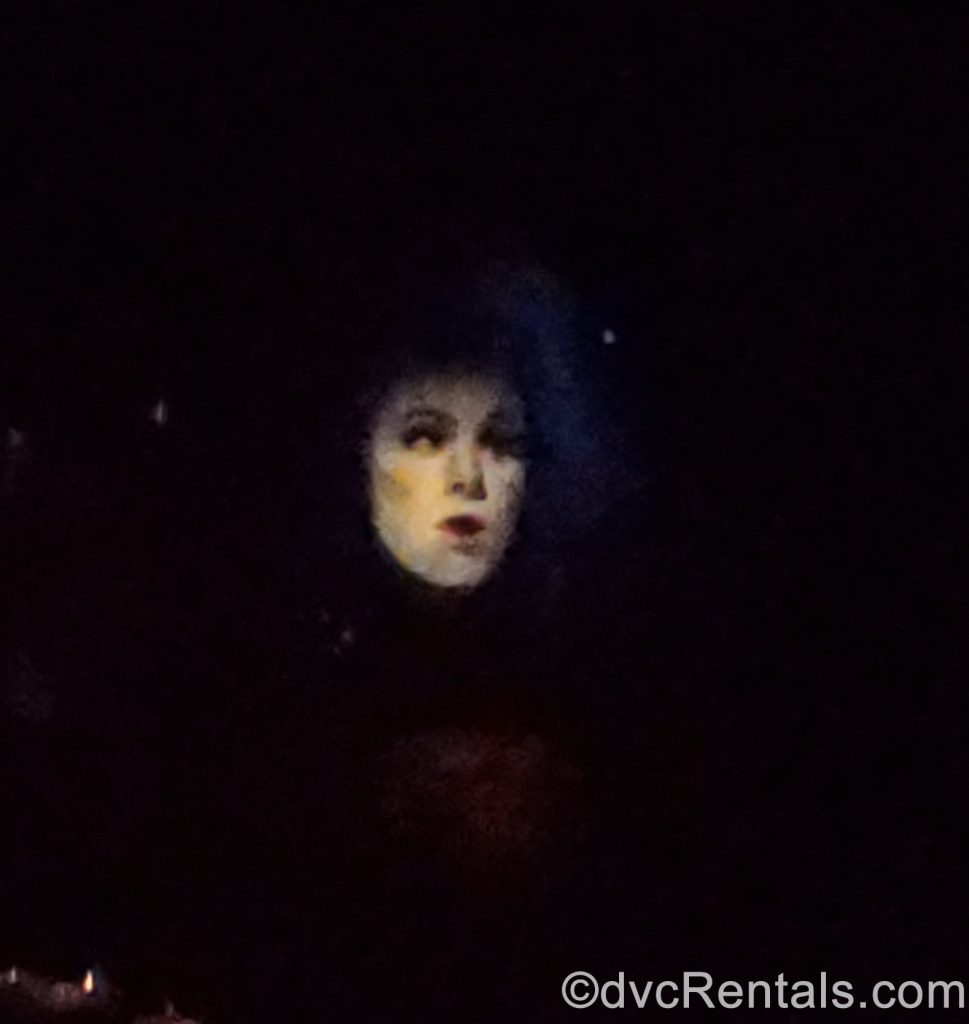 The Haunted Mansion is a Disney staple and one of my personal favorites. I cannot wait to see how different the Haunted Mansion will be 50 years from now. I am sure it will bring just as much excitement to me as it does now, as long as the Grim Grinning Ghosts Come out to Socialize! 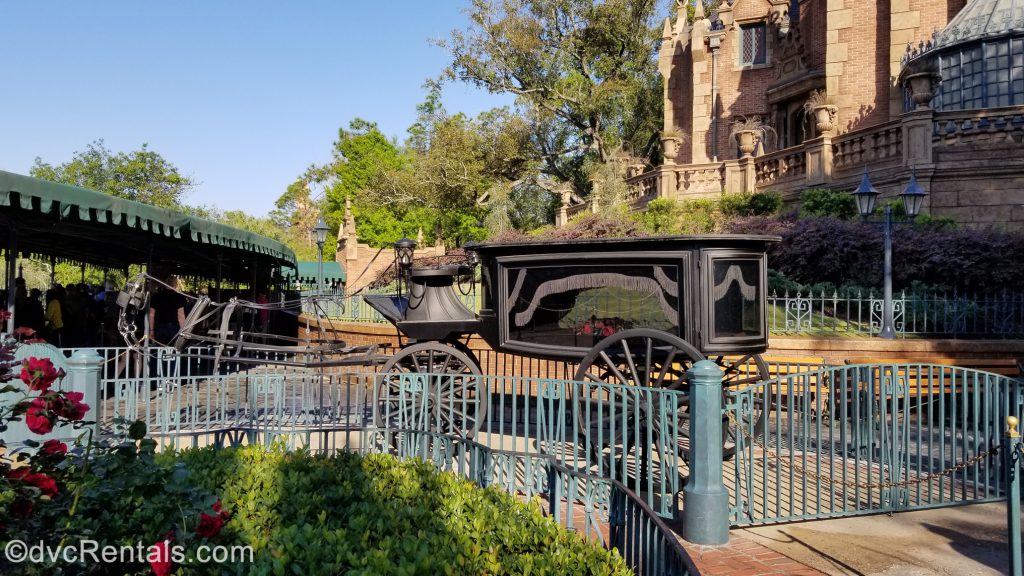