The Hall of Presidents

Walt Disney was such a huge fan of Abraham Lincoln that he once dressed up as the President when he was in elementary school—and recited the Gettysburg Address for his classmates. As an adult, Walt had an even better idea—to create a “living” version of Lincoln that would be able to walk and talk! The Illinois pavilion was more than happy to host this at the New York World’s Fair in 1964. But the project was so costly that the state couldn’t afford it. Robert Moses, head of the fair, was so enamored with Walt’s vision that he was able to get the money to sponsor the project.

After many attempts and failures, Disney’s Imagineers came up with an audio-animatronic version of the 16th President in a show entitled Great Moments with Mr. Lincoln. 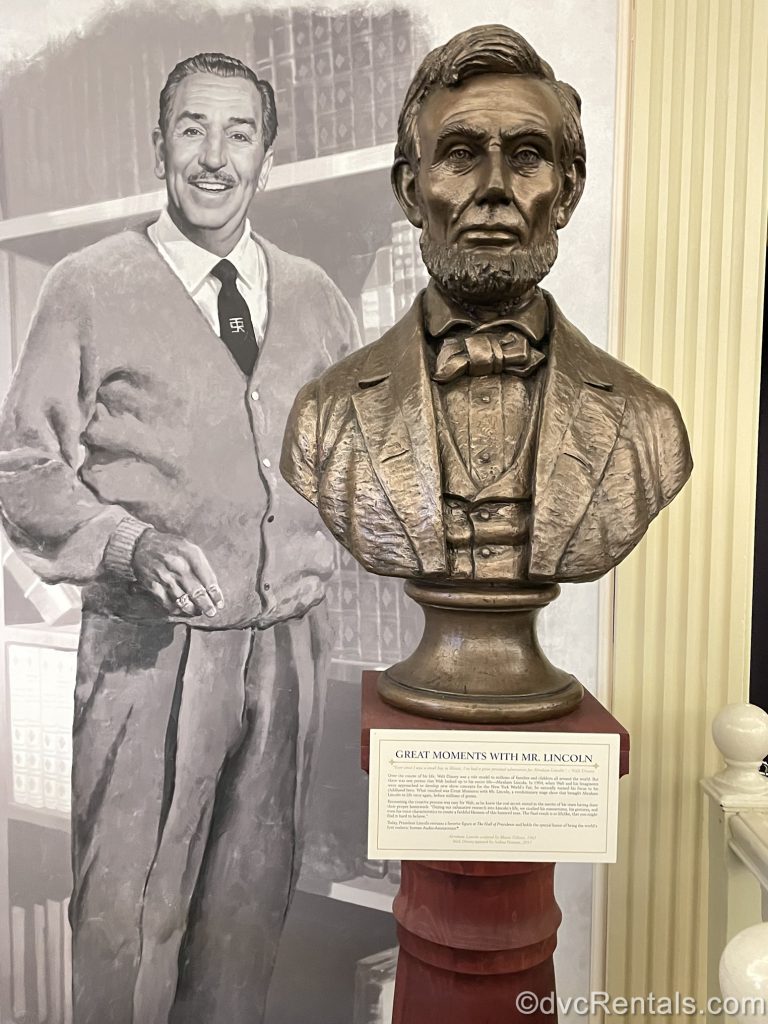 The debut at the World’s Fair was a hit. Lincoln talked, moved, and in every way seemed realistic to the audience. Adding to the wonderful animatronics was the fact that Lincoln’s face was made from an actual 1860 life mask of the President. The creation seemed so real that many people visiting the attraction were convinced it was a live human being and not a “robot.” A year later, Walt added Great Moments with Mr. Lincoln to Disneyland—where it still plays daily. 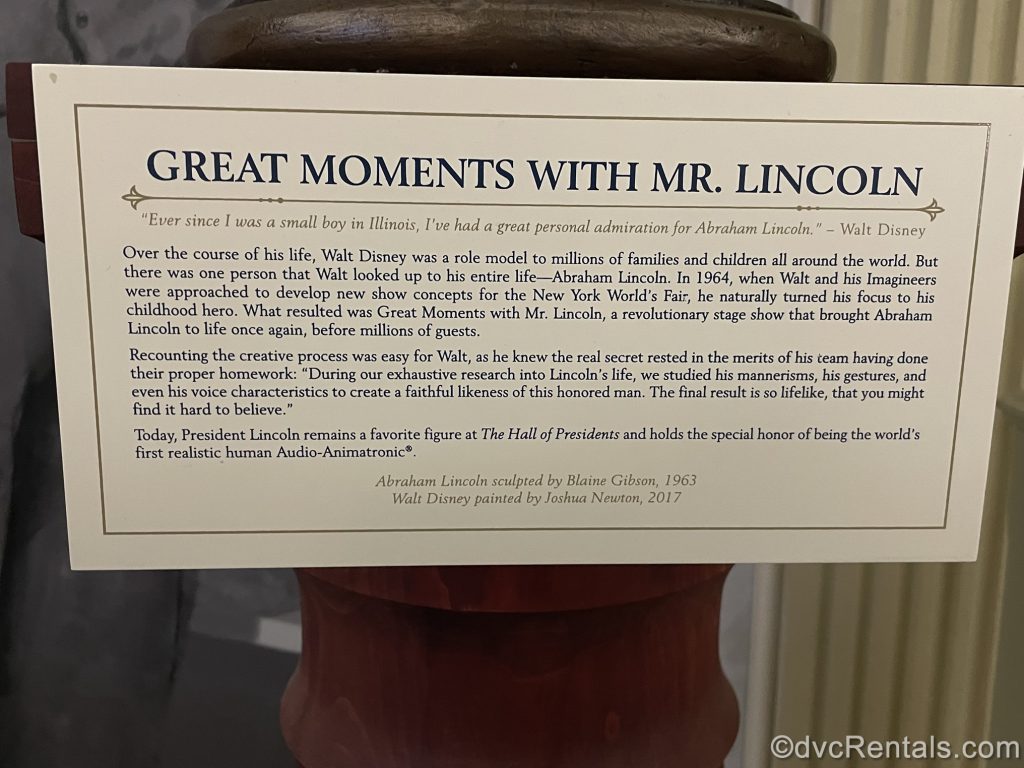 Prior to his death, Walt had discussed plans for an attraction based on all the Presidents.  Although Walt passed away before Walt Disney World opened, the Imagineers wanted to build on his vision and planned an attraction based where every single current and past President would be represented in an audio-animatronic form in The Hall of Presidents. 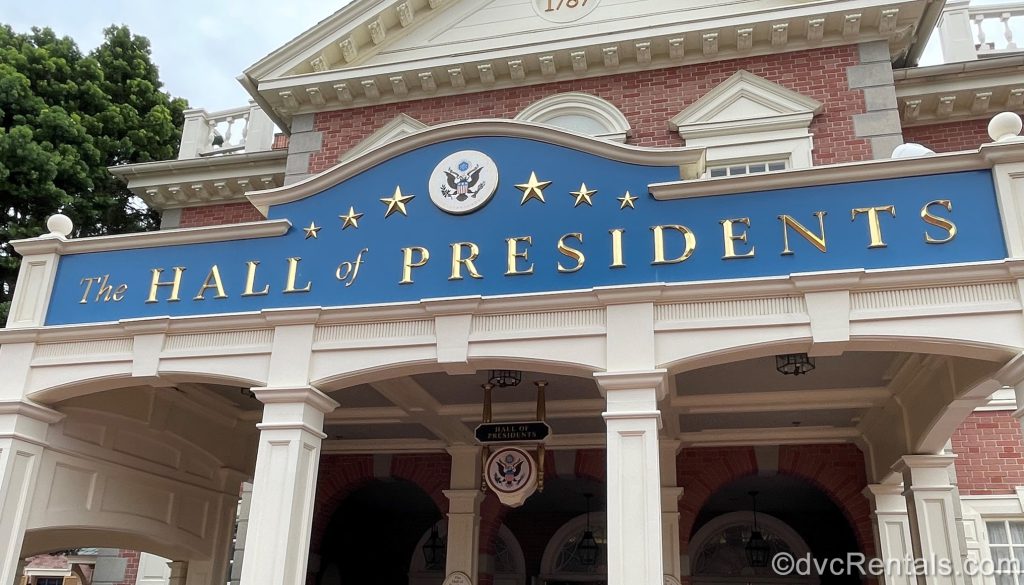 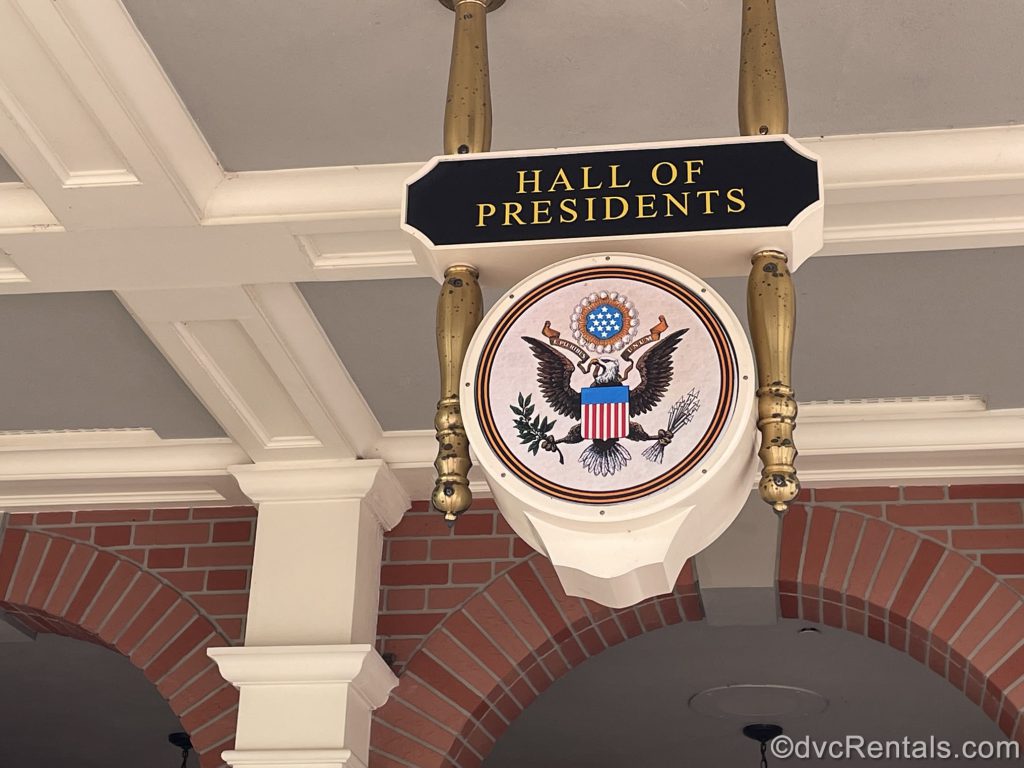 The attraction was ready for the Liberty Square section of the Magic Kingdom on opening day, October 1, 1971. It is still there today. Imagineers update the attraction each time a new President is elected to office. Since 1993, the newest President of the United States records his own speech to be played when his audio-animatronic “speaks.” 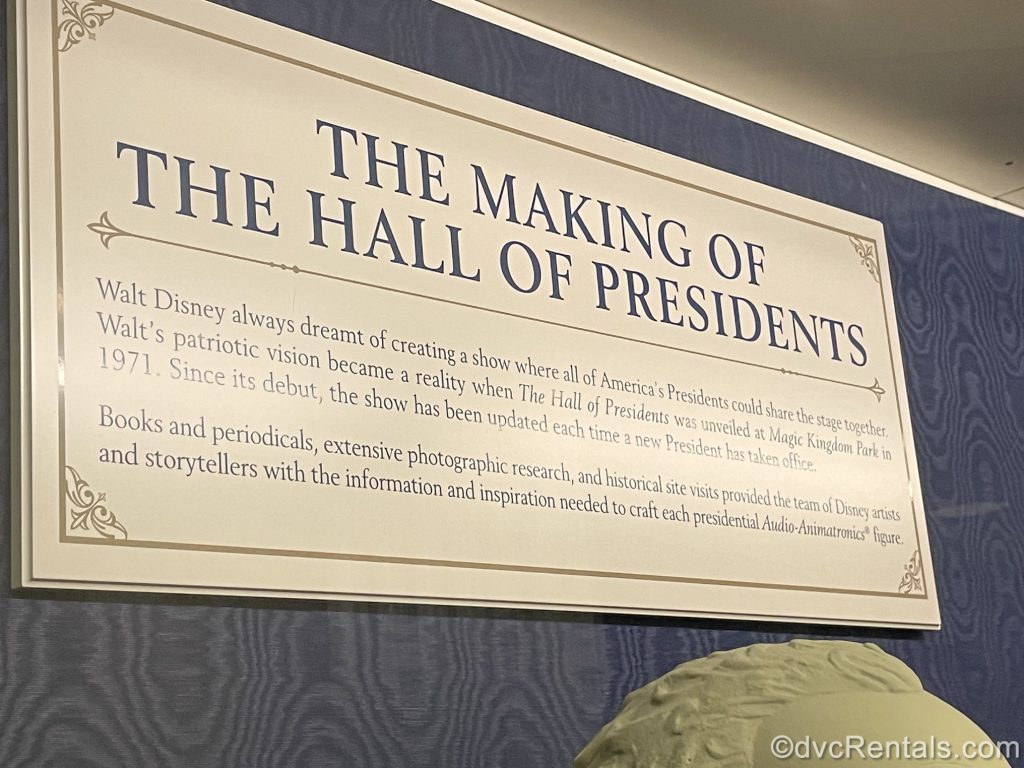 Before watching the 25-minute main show, guests have a very interesting lobby to look around. 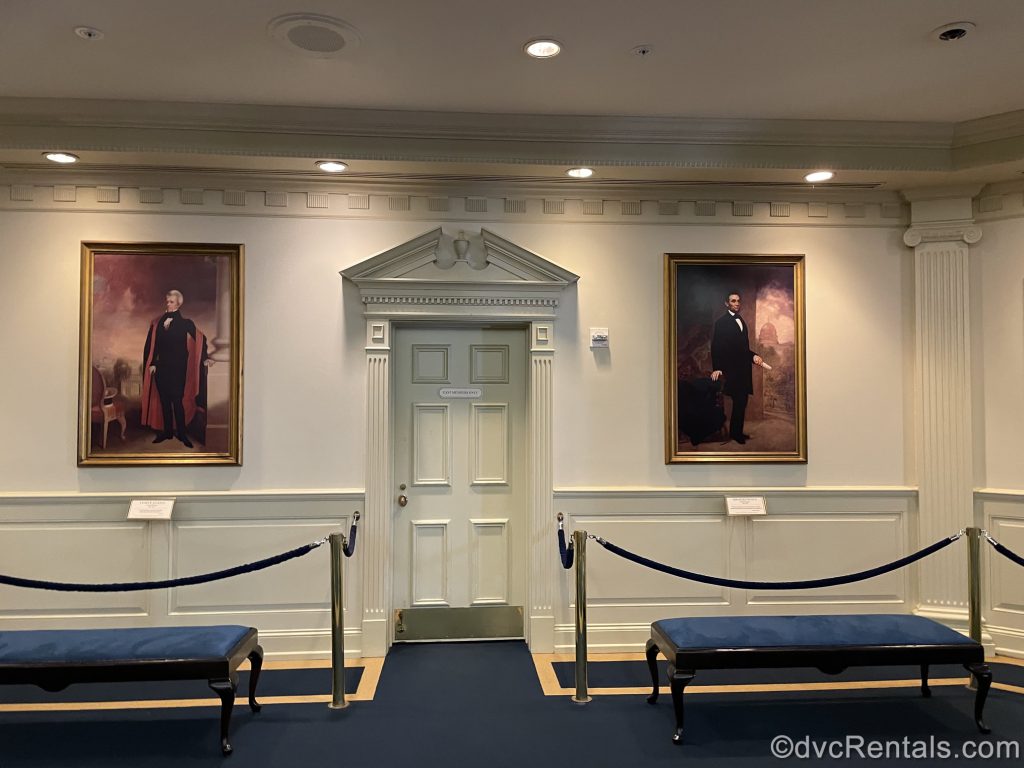 On display are quite a number of historical artifacts from Presidents and former first ladies, including dresses some of the women wore to their spouse’s inauguration. There are paintings of many of the former presidents and a whole section about Walt and his fondness for Mr. Lincoln. In one area of the carpet, guests can see the Great Seal of the President. 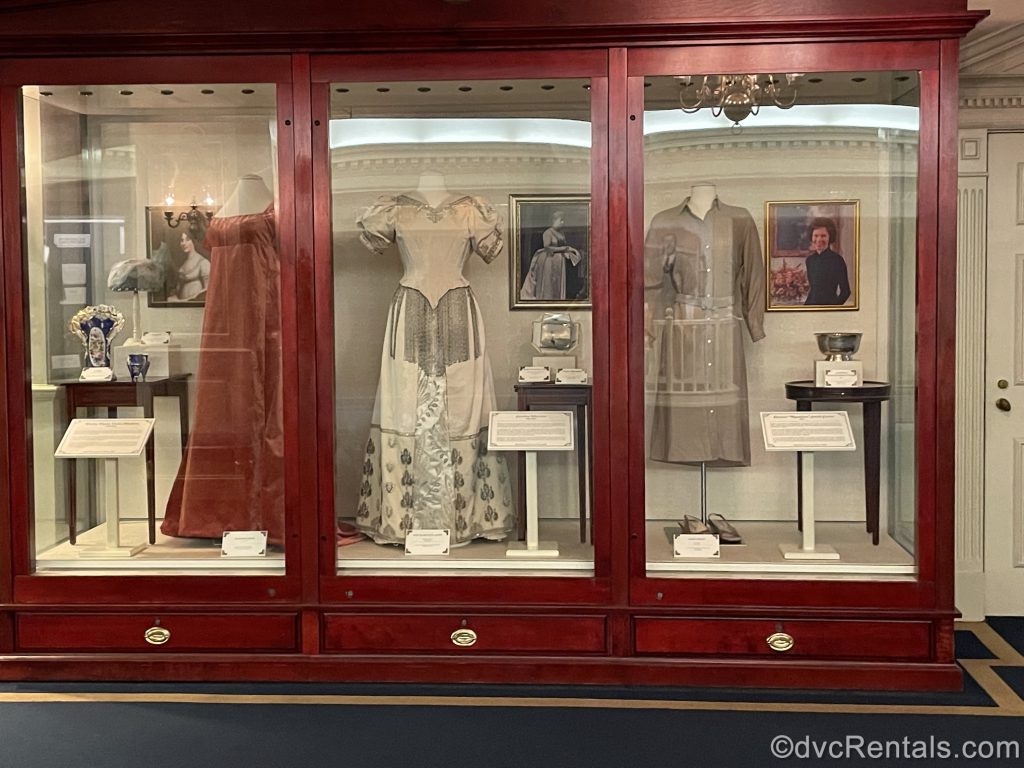 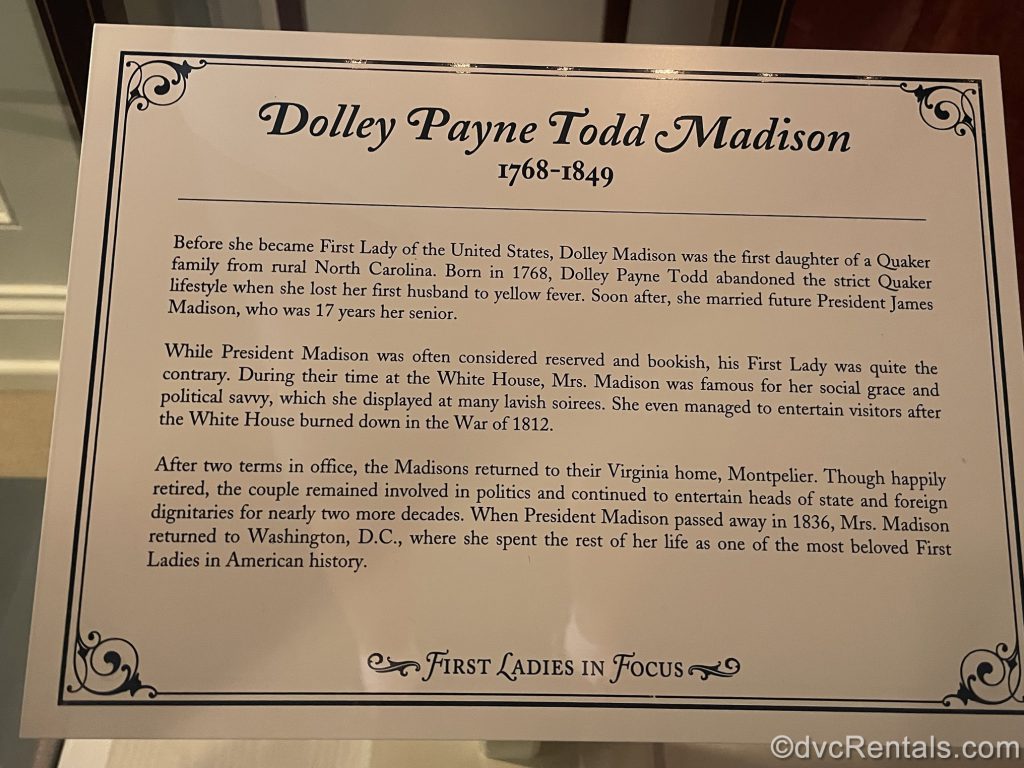 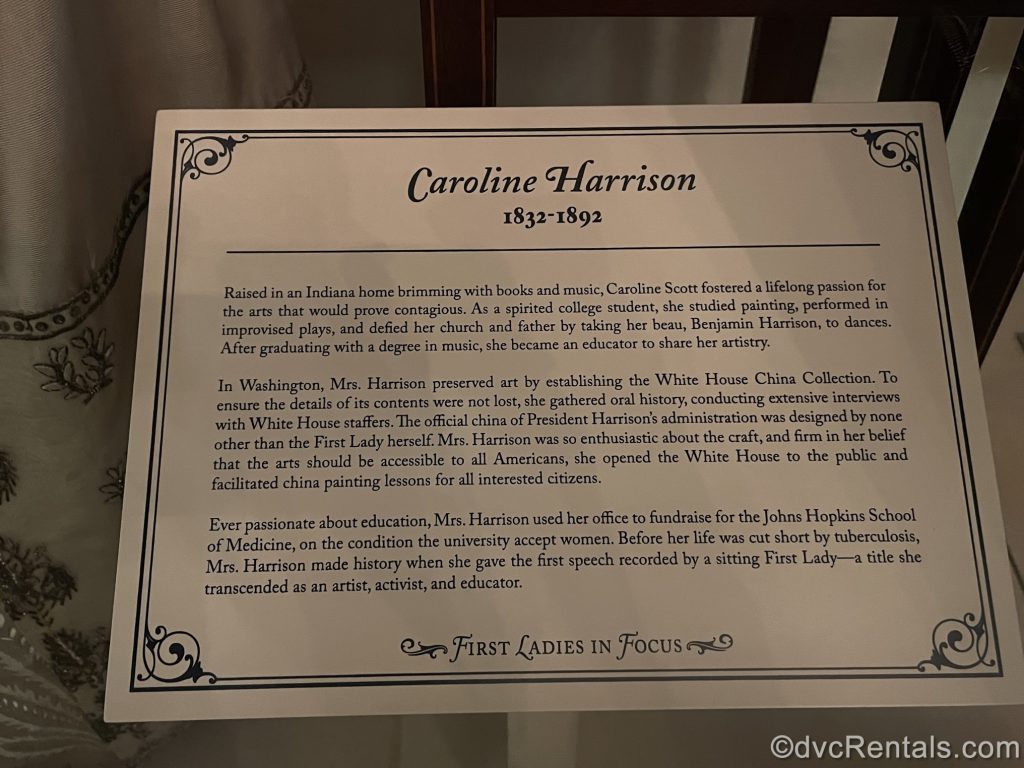 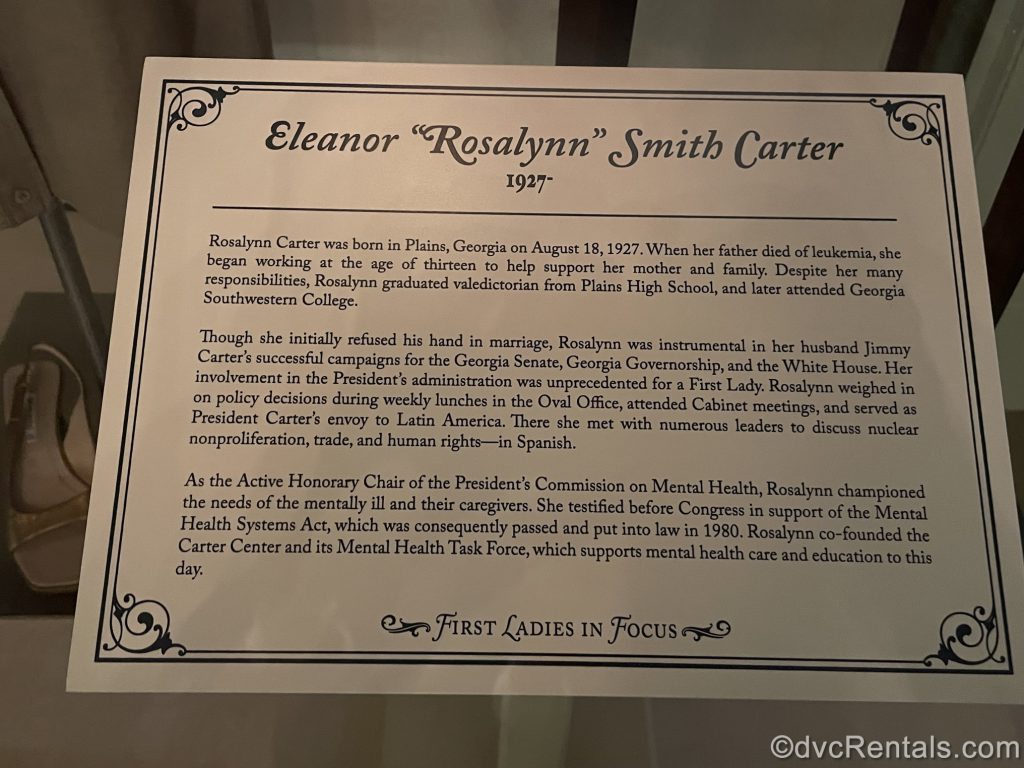 Guests enter a large auditorium with comfortable seats to enjoy the Main Event. As the show begins, the narrator announces that it is “dedicated to the memory of Walt Disney.” First, we see a movie about the history of the USA and its Presidents. 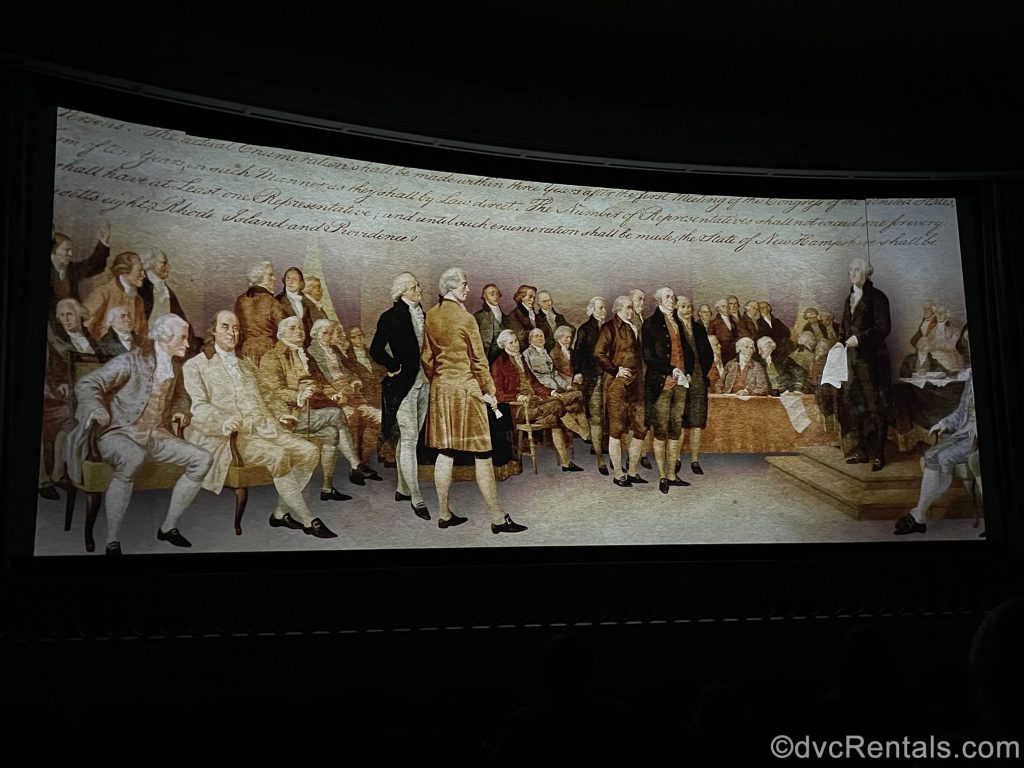 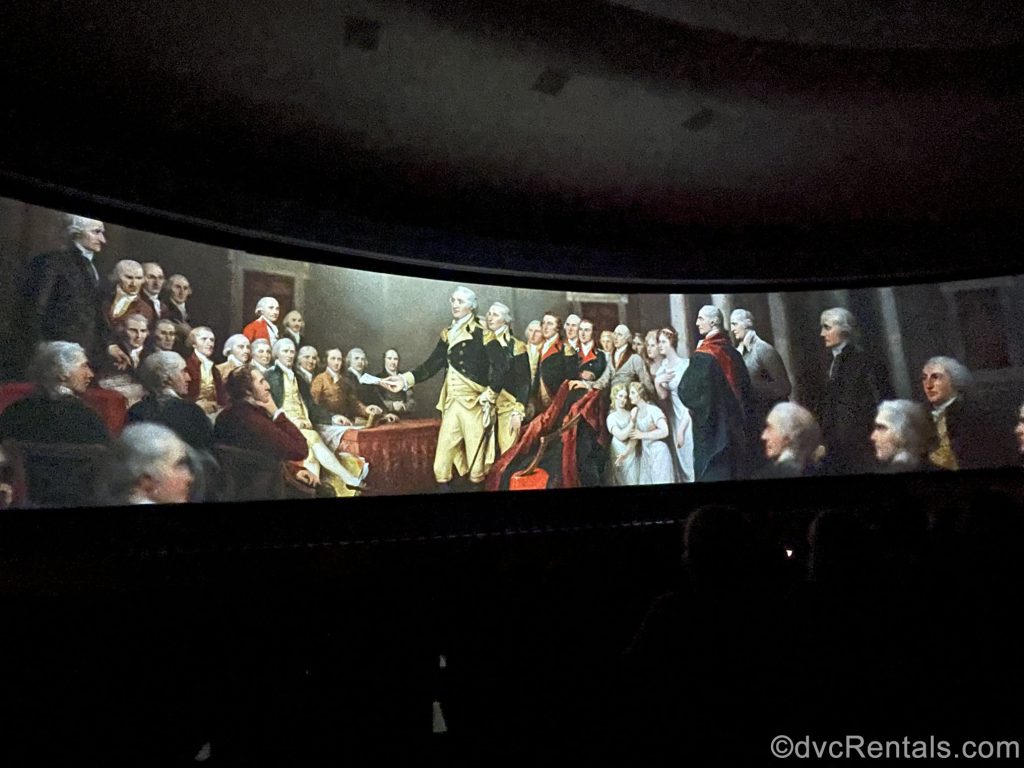 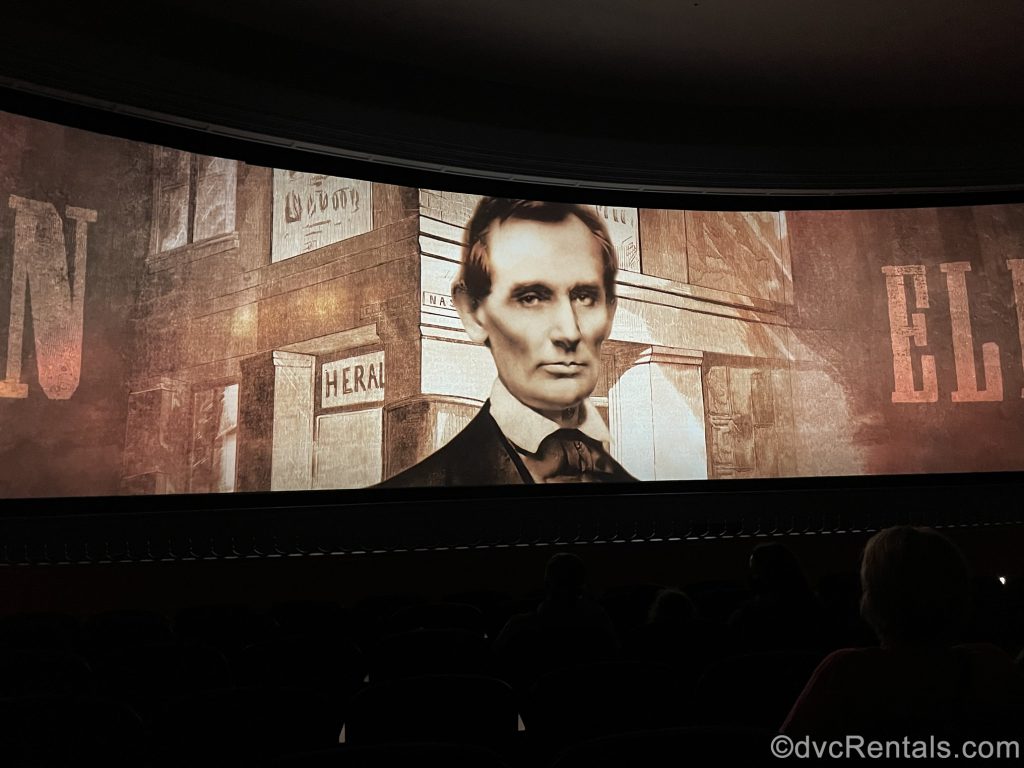 The Grand Finale has a curtain rise, and all of the US Presidents are standing in an animatronic form on a huge stage. Each one’s name is called, with a spotlight on the President as he is named. Some nod their heads, some motion with their hands. Watch carefully, and you will see some of those waiting fidget impatiently. 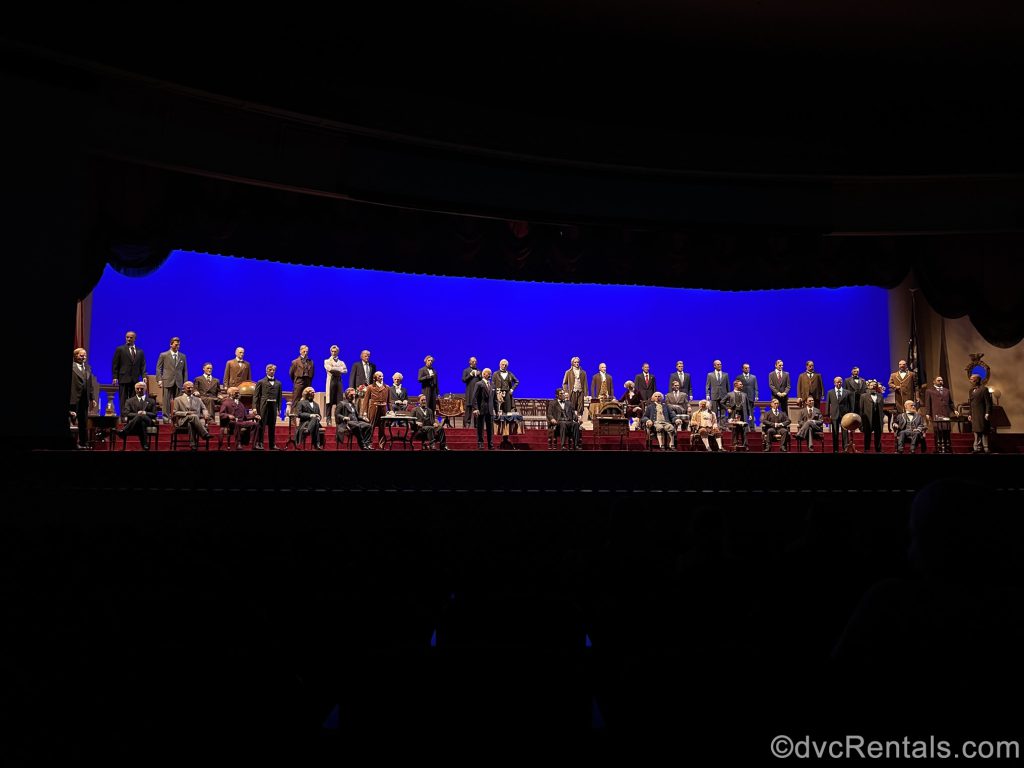 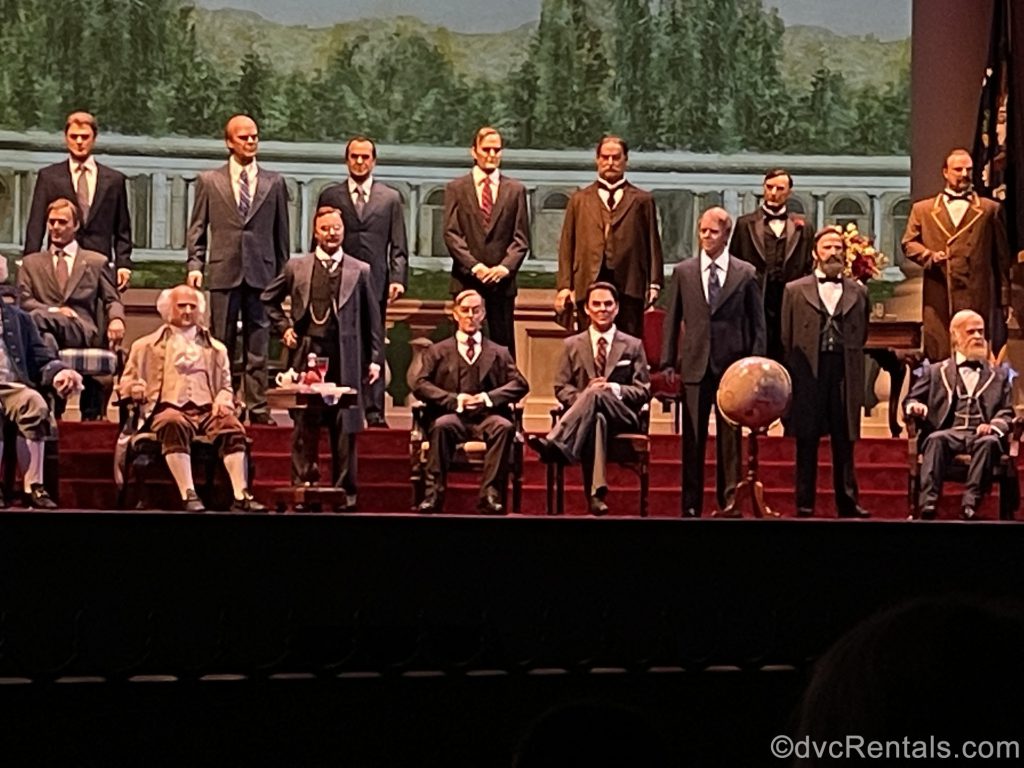 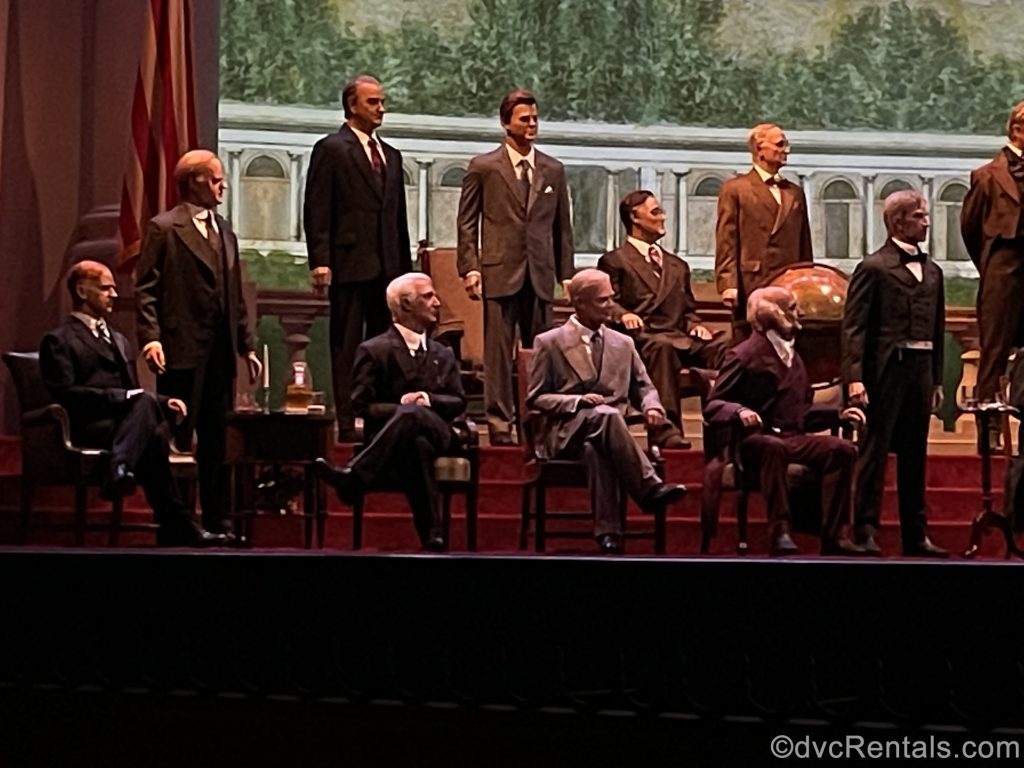 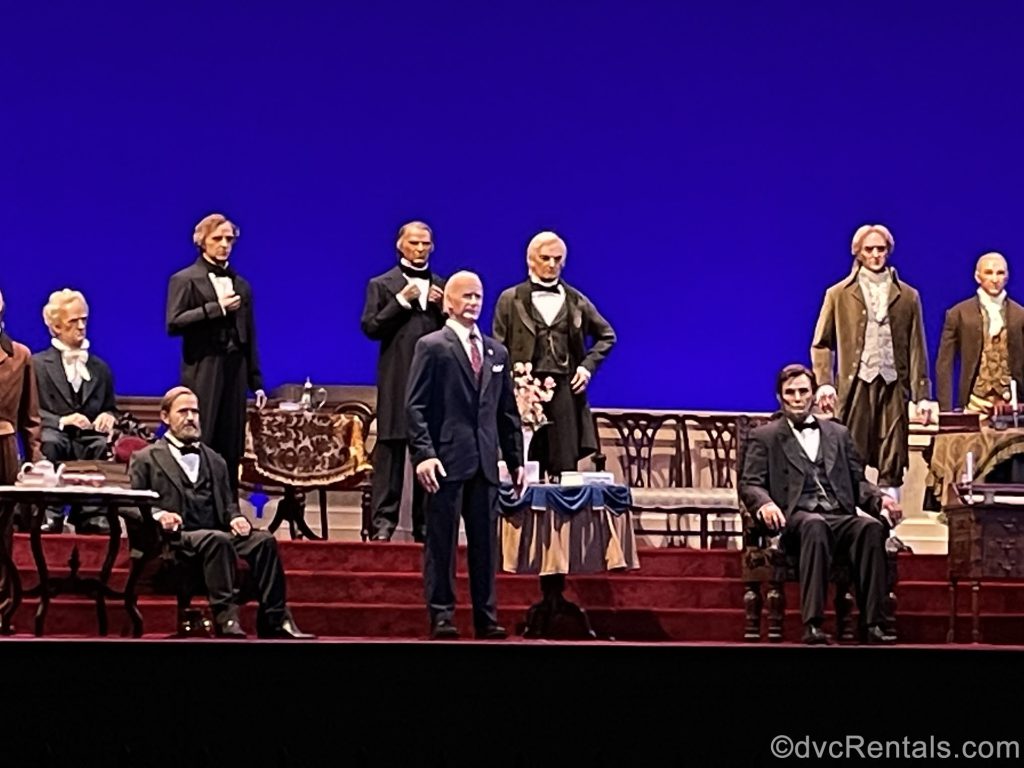 In keeping with Disney’s attention to detail, much time was given to making sure all the audio-animatronics in the attraction were the correct height and weight and that their hair was the correct color. Clothing, shoes, eyeglasses, watches—all were added to each President’s audio-animatronic likeness to match what was worn during their lifetime. 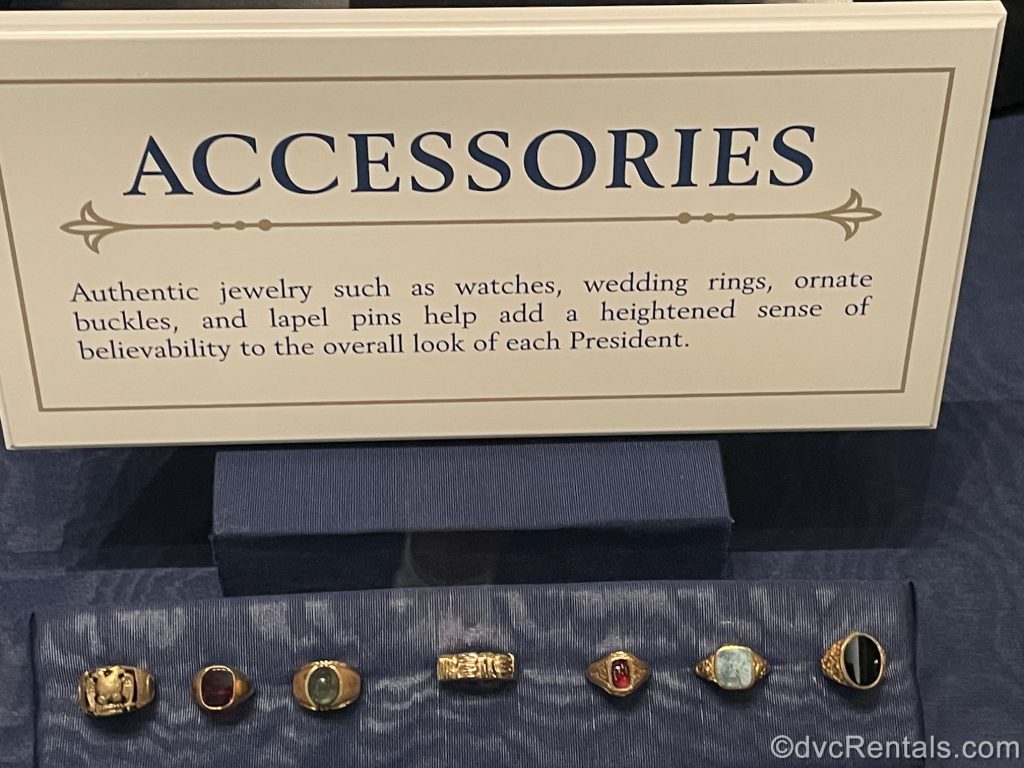 Even though guests cannot see it through his pants, leg braces were added to the FDR audio-animatronic. Personalities were also taken into consideration. The Imagineer who sculpted the Presidents, Disney Legend Blaine Gibson, did research on each one in order to capture their spirits as best he could. 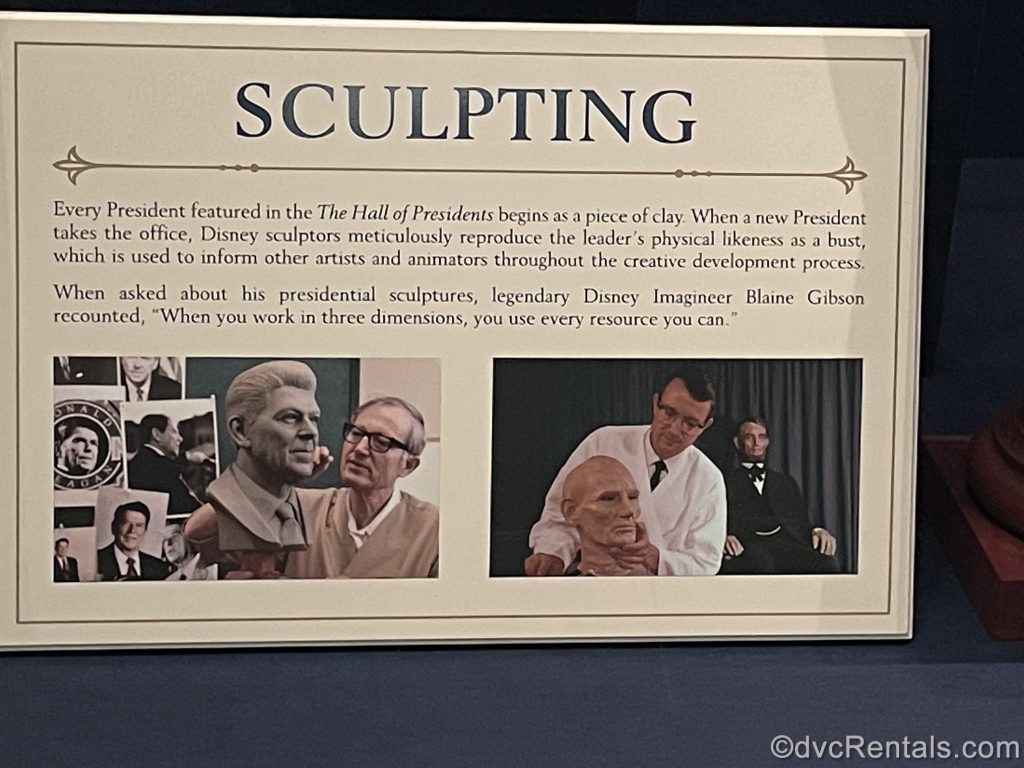 Additional Facts about the Hall of Presidents: 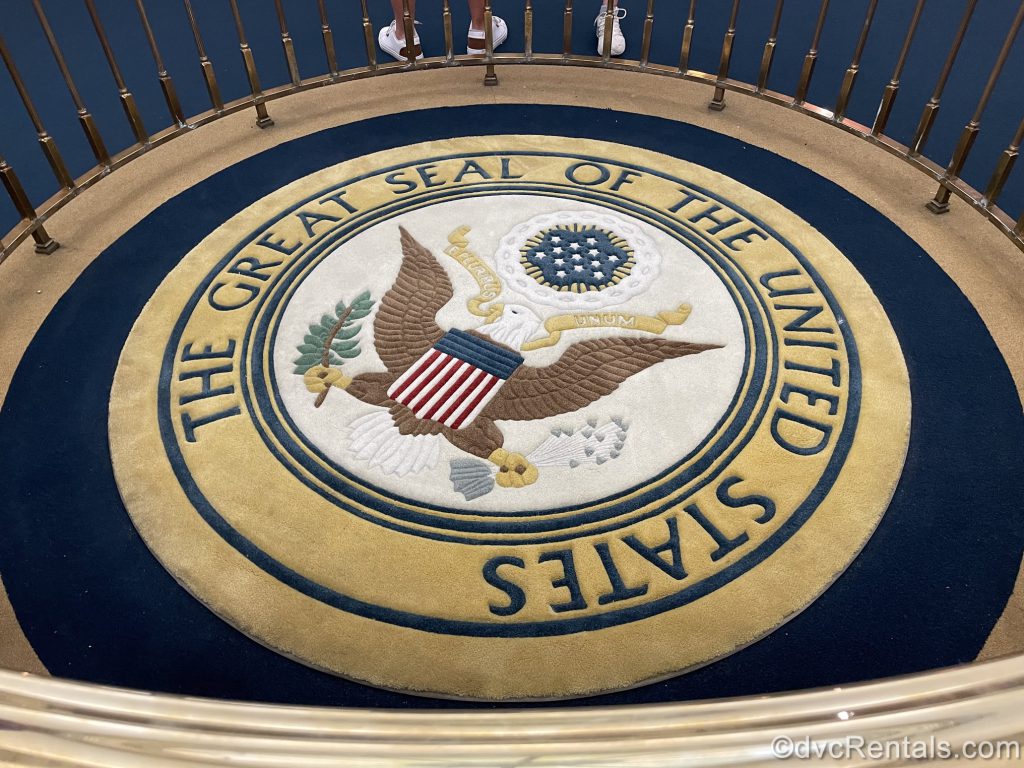 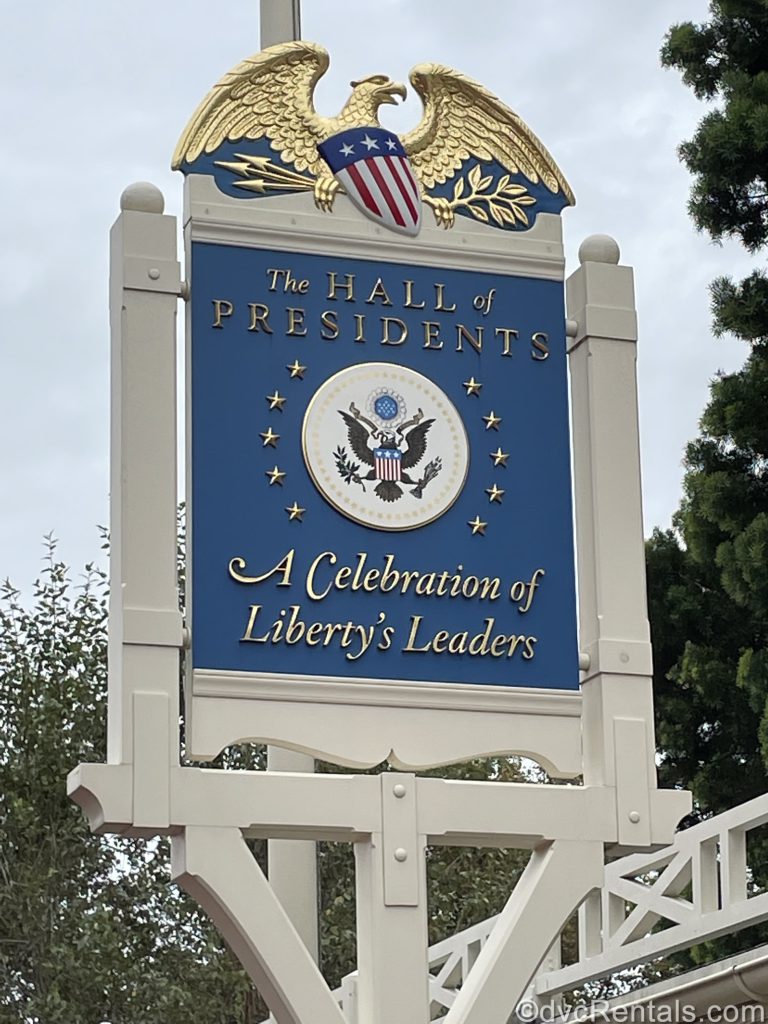 I think Walt would have LOVED this show. The combination of the artifacts in the lobby, the movie, and the audio-animatronic Presidents make this an attraction that is not only interesting but it’s also enlightening. The Hall of Presidents is an enjoyable way for young and old alike to learn about the history of the USA and its leaders and to honor the man who started it all, Mr. Walt Disney.