Located inside the Odyssey Events Pavilion behind Test Track is Walt Disney Imagineering Presents the Epcot Experience, and it’s amazing! 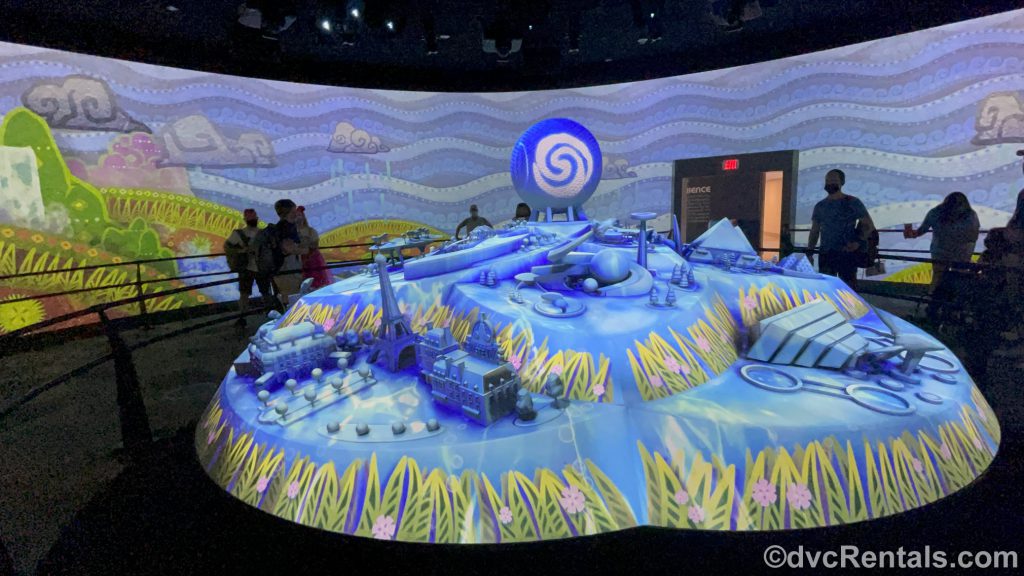 It’s an exhibit where guests can preview what Imagineers have in store for Epcot in the near future and can also see a nod to the past of the park. Most people, myself included, consider it a “must-do” attraction at Epcot, as the presentation is unique and fascinating. Before we discuss what guests can expect to see now, let’s look at the history of this attraction. 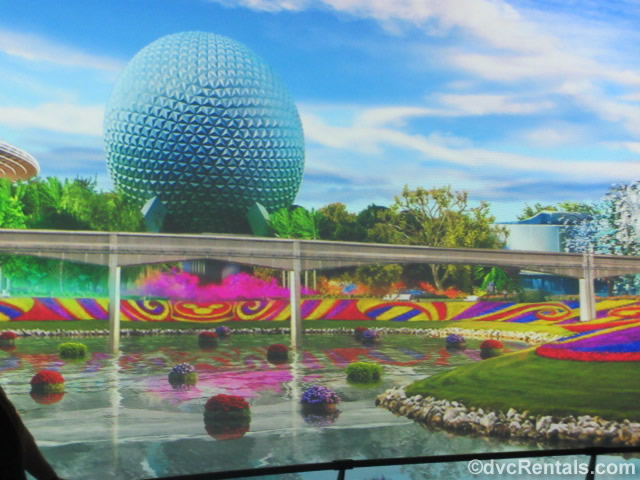 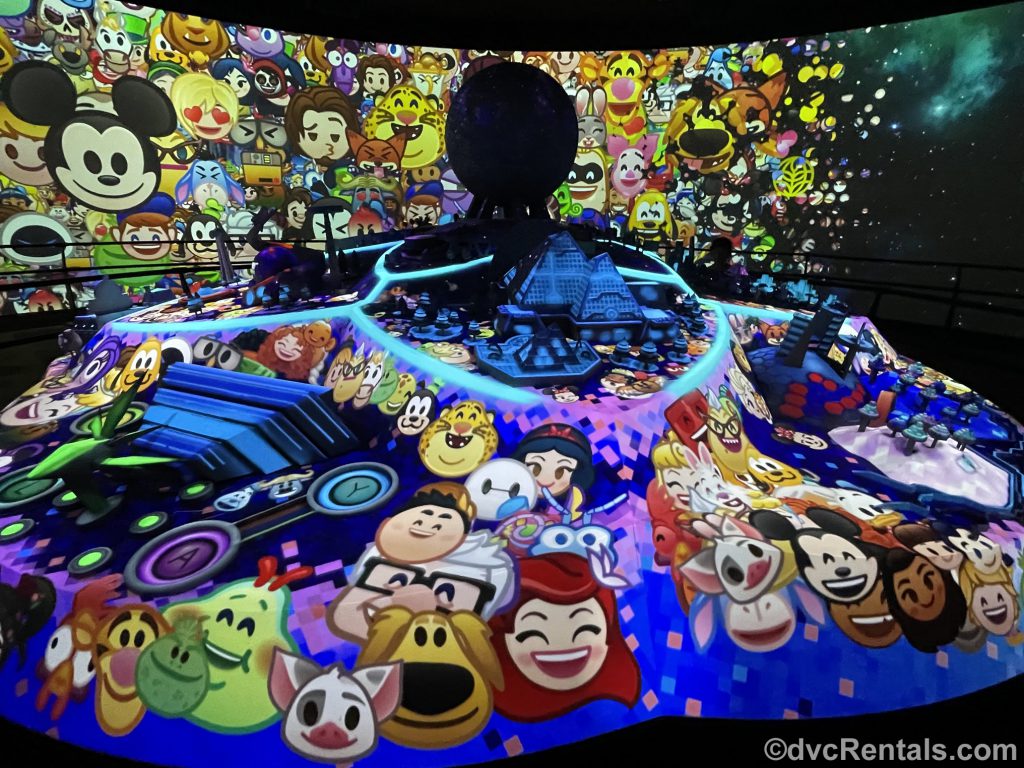 D23 is an official club for Disney aficionados, run by the Disney Company. The club has a number of events for members, including a yearly Expo with highlights of what is coming to Walt Disney World in the near future. At the 2019 D23 Expo in August of that year, plans were revealed for big changes at Epcot. Those attending were told Epcot would be undergoing a huge transformation, which would include new attractions, experiences, and Future World areas known as “neighborhoods.” Not long after the Expo, on October 1, 2019 (the 37th anniversary of Epcot’s opening day), the Epcot Experience welcomed its first guests. The exhibit was an immediate hit. It was exciting, interesting, and fun to view upcoming projects in an impressive multi-media fashion (more about that soon). It’s one of those experiences you can see multiple times and still spot something new every time. There is so much to see!  During super busy times, Cast Members may ask guests to wait a short while before allowing them into the theater, but generally, there is no wait at all. The show runs continuously and is about ten minutes in length. Guests can enter (or exit) any time during the show, and there is plenty of room for wheelchairs. Audio descriptions for guests with sight disabilities and handheld captions for those with hearing loss are available (ask a Cast Member). Happily, the theater is air-conditioned, a welcome respite during the warmer days. Currently, there are no seats, but there is a rail in the center of the room to lean on if guests feel unsteady on their feet. The Epcot Experience uses cutting-edge technology. As they enter the darkened theater, it’s hard for guests to know what to look at first. Disney has created an inner room in a large circular shape. The center of the theater contains a very large diorama of Epcot. The diorama changes during the show, as different projections light up to accentuate certain spots. It’s hard to describe, but the effect is mind-boggling. For example, one minute you see Remi in France with some cheese, and suddenly the very same spot changes to a hidden Mickey, and Remi has disappeared from view. 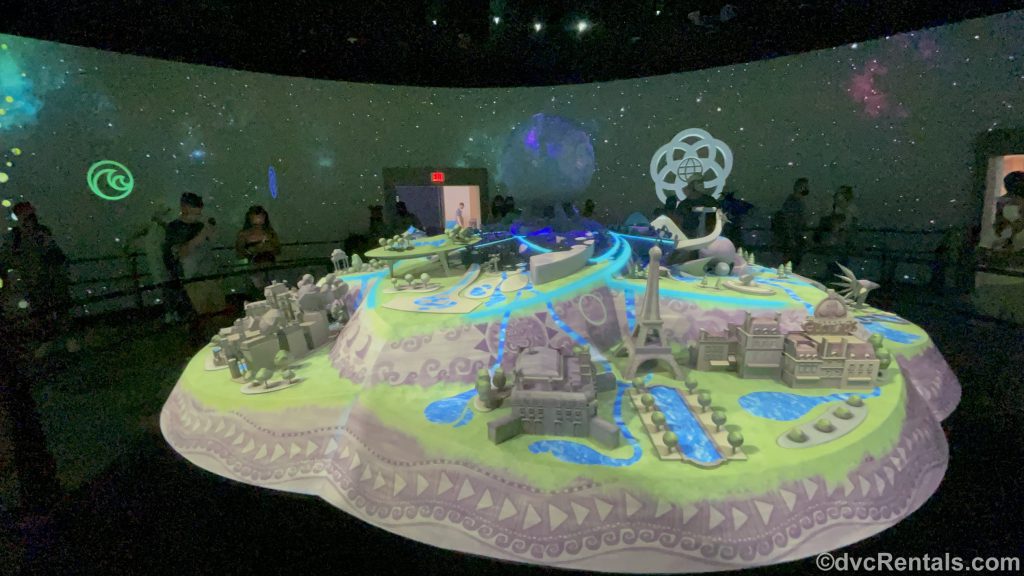 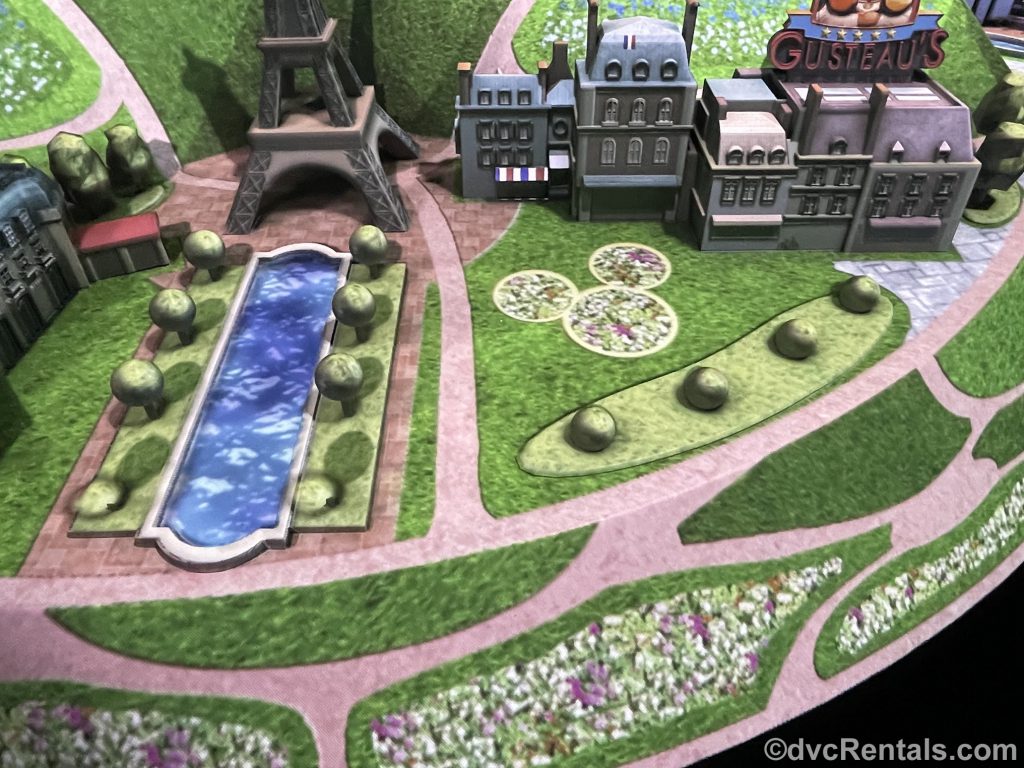 Synchronized with what guests see on the diorama, various scenes are shown on screens that completely surround the theater. The walls display a 360° floor-to-ceiling film that combines actors, Epcot scenes, animation, old film clips, and more. The show uses 30 projectors to bring the experience to life. 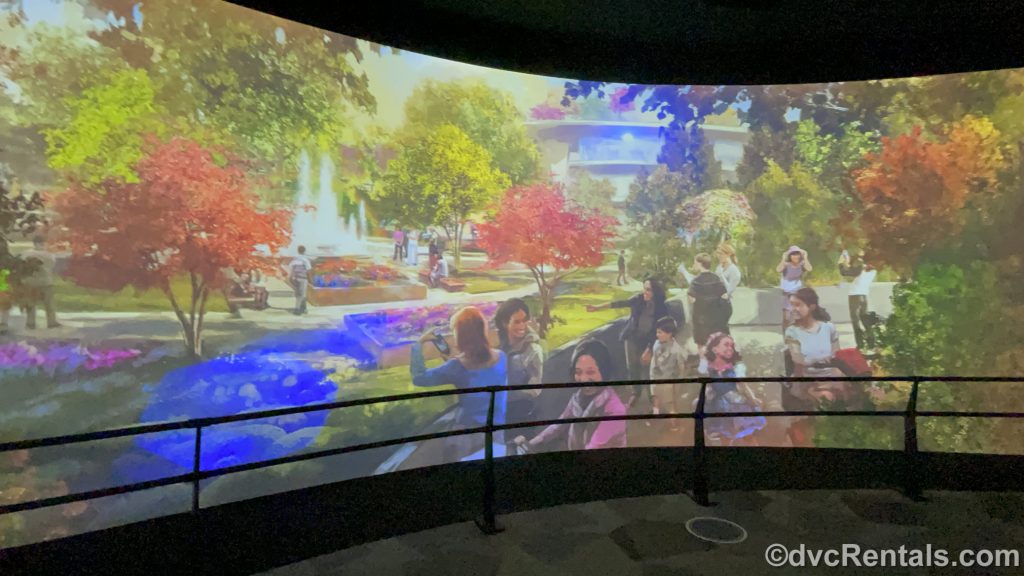 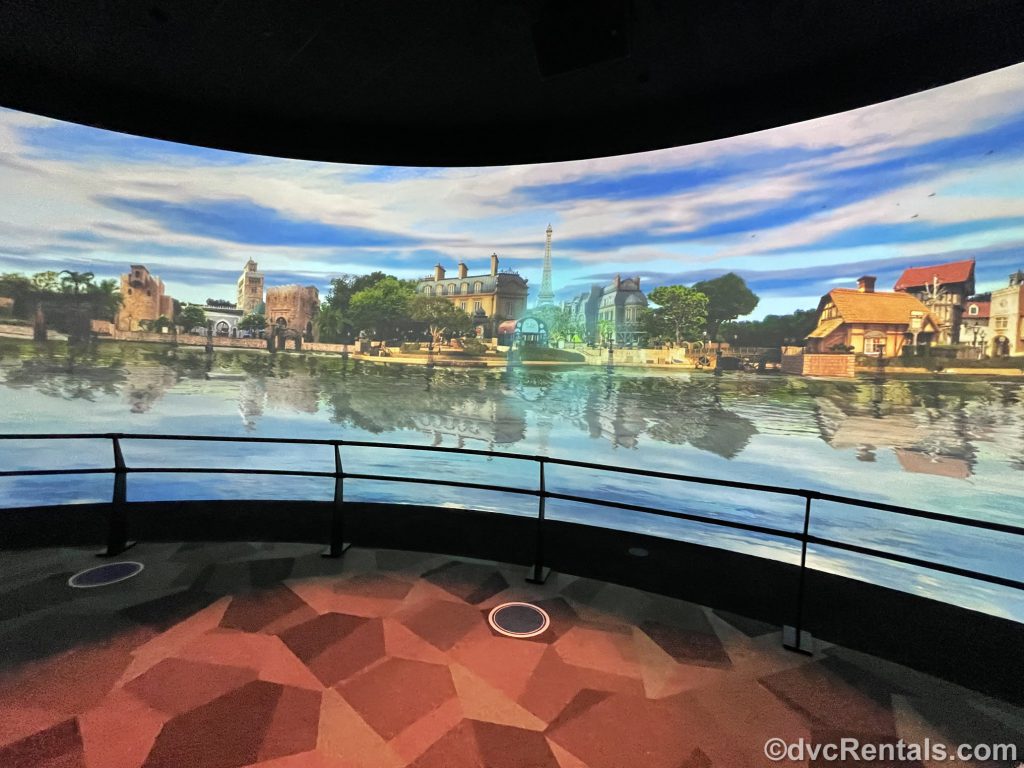 Depending on where guests stand, each viewing can be completely different than the last one, as each area of the diorama varies, and each of the scene-matching screens surrounding you varies as well. The entire show is narrated to help guests understand each scene being presented. The upcoming attractions showcased include The Play Pavilion (formerly the Festival Center, prior to that The Wonders of Life Building, being reimagined as a family play area); Ratatouille; Guardians of the Galaxy, HarmonioUS (nighttime spectacular coming to the World Showcase Lagoon). Remy’s Ratatouille Adventure gets the most “screen time” of all the upcoming attractions. 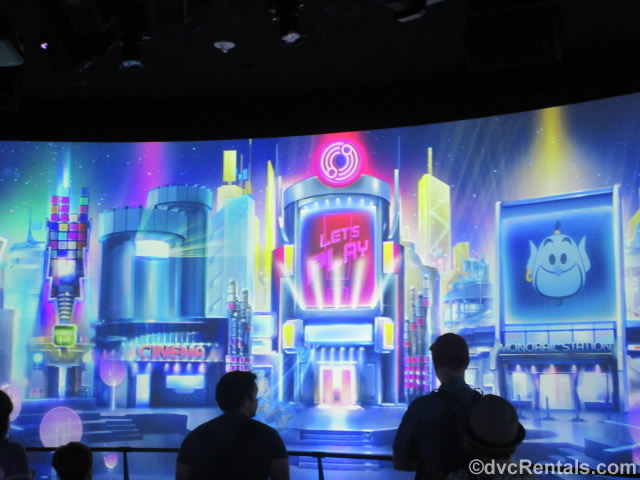 A few heads up: It’s dark during certain portions of the show but never pitch black. There are some flashing as well as some moving lights, and guests will see shooting stars and fireworks displays during the film presentation. The music can be loud but not terribly so. 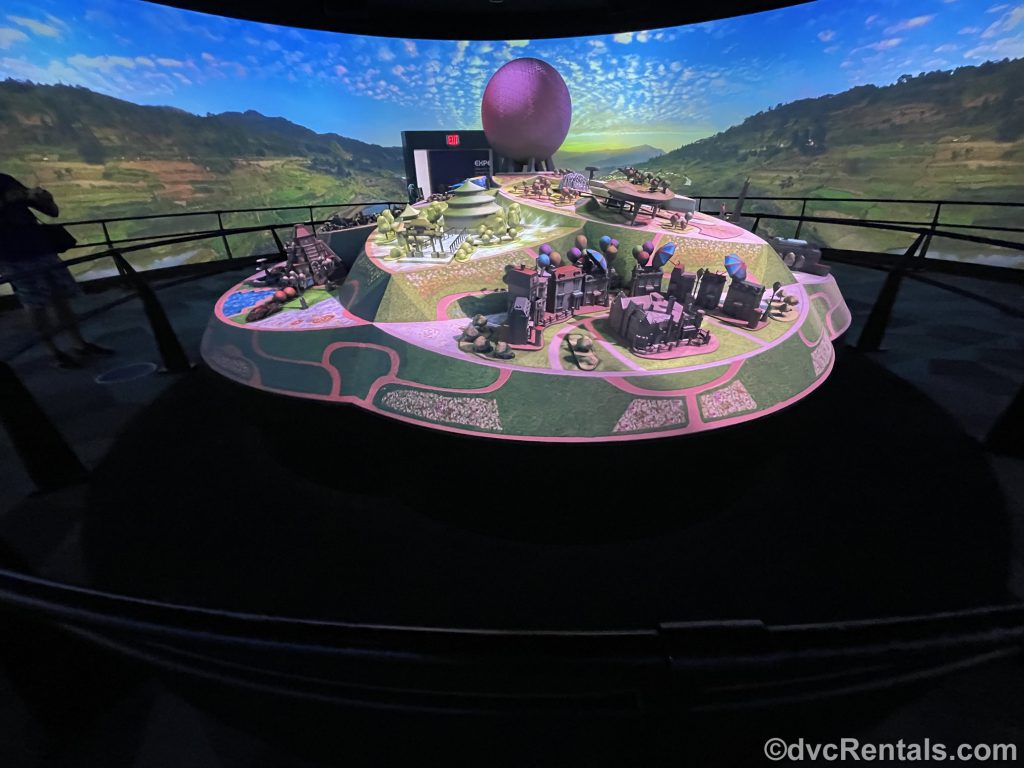 There is no way of knowing how long the Epcot Experience will be running, but chances are good the exhibit will change as the work currently being done at Epcot is finished. My guess is that until all of the attractions in the experience are completed, the show will continue, but that is truly a guess. We know Ratatouille is due to debut at Epcot this year on October 1, so it makes sense the exhibit will be there until at least then. 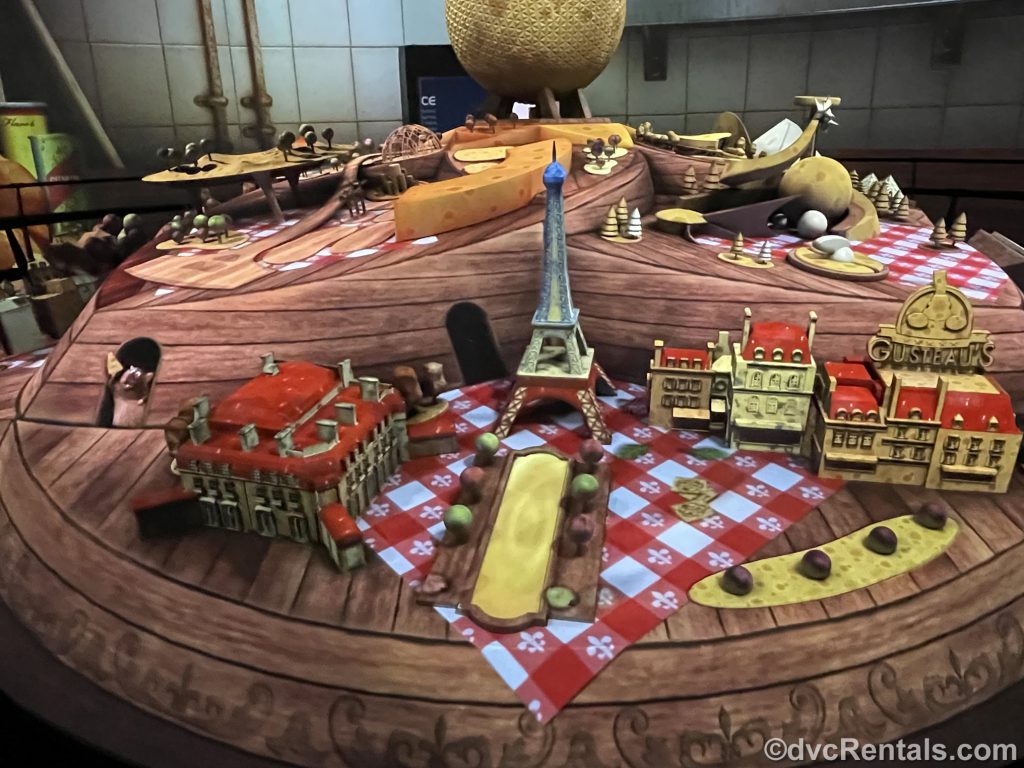 Check it out if you’re visiting; it’s so immersive and enjoyable. Since it’s “off the beaten path,” many guests don’t even realize it’s there. To find it, walk the path behind Test Track that leads to World Showcase (or if you are in World Showcase, the path between Mexico and the central path). I can almost promise you’ll be glad you checked this out; it’s terrific! 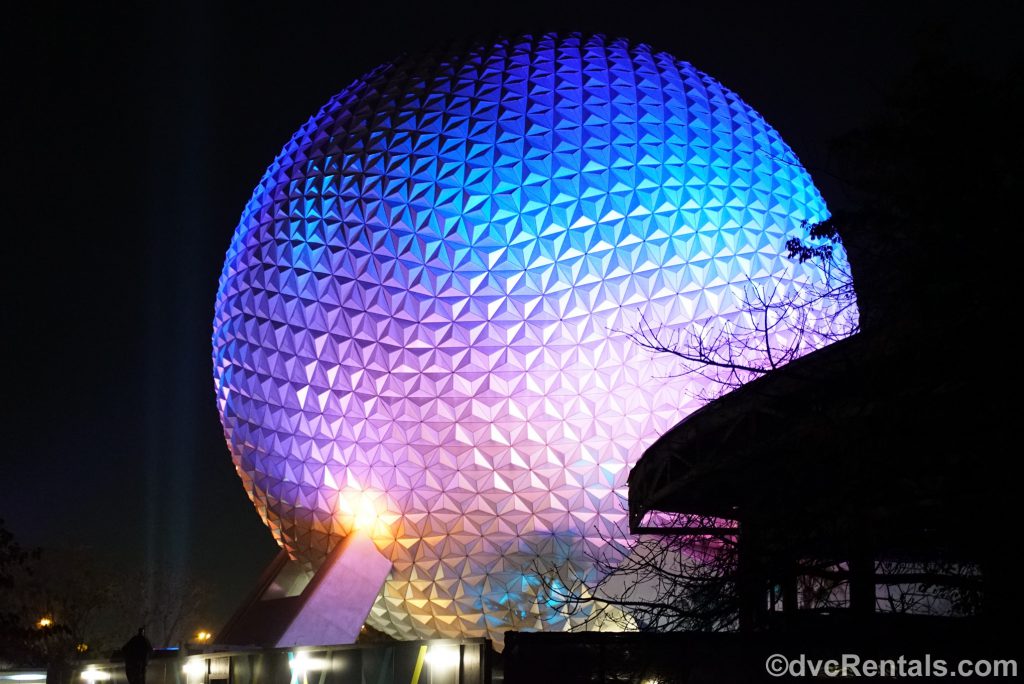