The Dapper Dans are a barbershop quartet who perform at Walt Disney World’s Magic Kingdom seven days a week, usually six performances per day. They were a hit immediately as an opening day attraction, and remain very popular today. 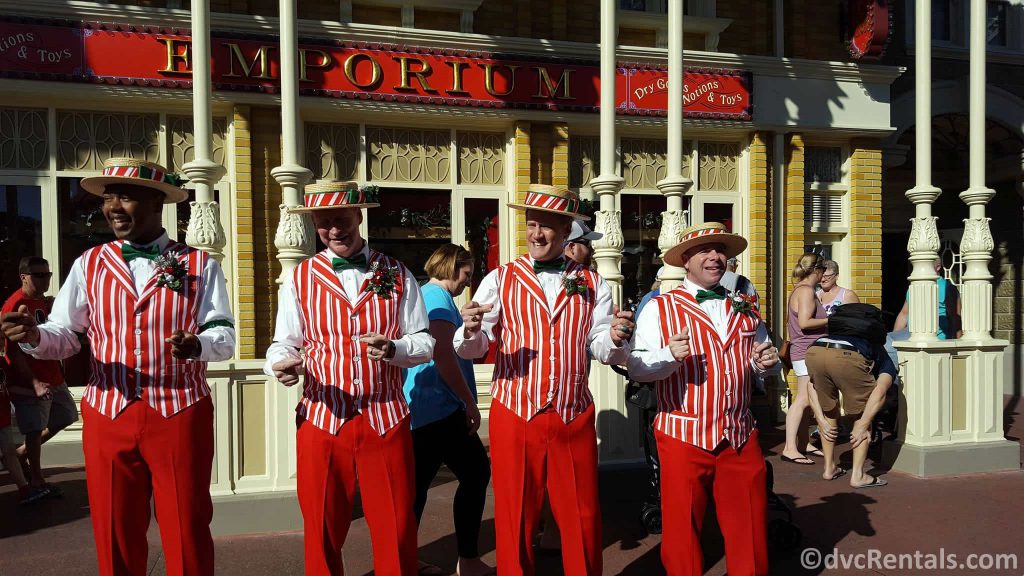 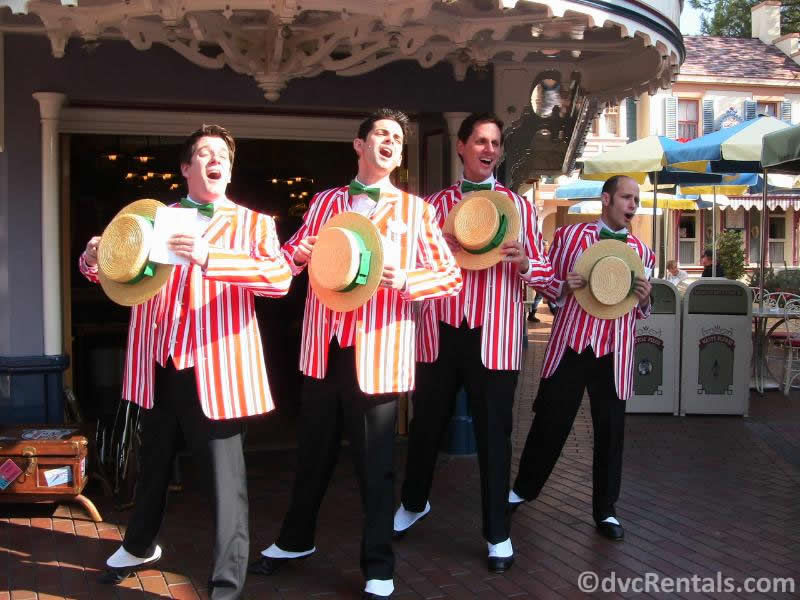 This blog will concentrate on the Dapper Dans at Walt Disney World. Fun Fact: Walt Disney loved the sound of a barbershop quartet and even asked the musical group The Mellomen to record an album of barbershop songs, Meet Me Down on Main Street, which was sold at Disneyland for a number of years.

The dictionary defines a Dapper Dan as “A man who dresses and is groomed in a fancy, elegant, or fastidious manner.” This term was popular at the turn of the century, the time period the Magic Kingdom is themed for. Hence, Disney decided the name Dapper Dans would be apt for the quartet. However, while they may look elegant and fancy, their show leans more towards cornball fun, entwined with beautiful music from the Dans. Prior to the official opening of Walt Disney World, the Dapper Dans did shows for Cast Members and their families. On opening day, October 1, 1971, the first song the Dans sang was Lida Rose from the musical The Music Man. 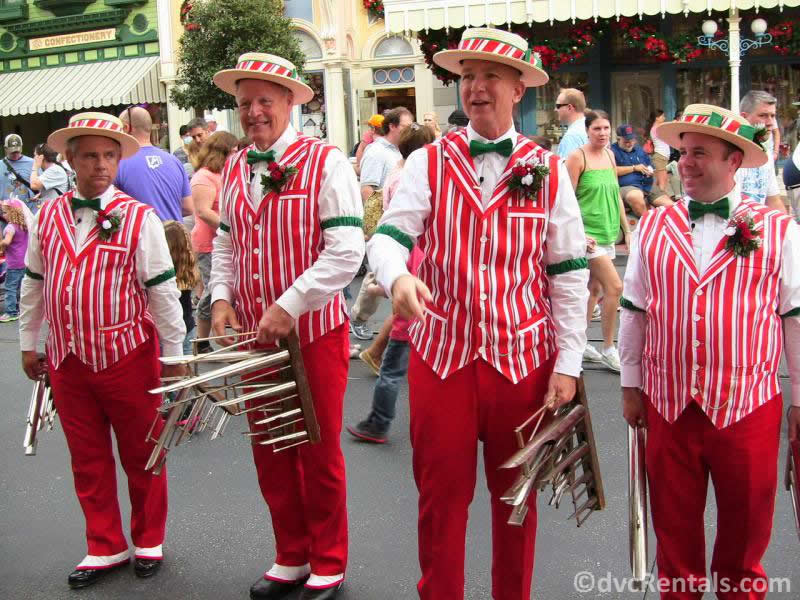 Cast Members in the Magic Kingdom can confirm showtimes the day you visit. Most performances last 20 minutes; some are a little longer.

It can sometimes be tricky to find the Dans. Usually, their first show is on the Trolley that goes from the hub by the main entrance to the Castle Hub. If you are lucky enough to get a seat, you will be serenaded all the way down Main Street. 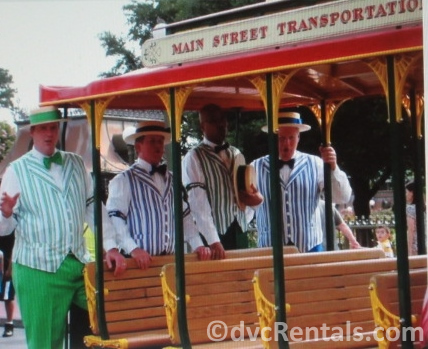 During the remainder of the day, they play at various places on Main Street. 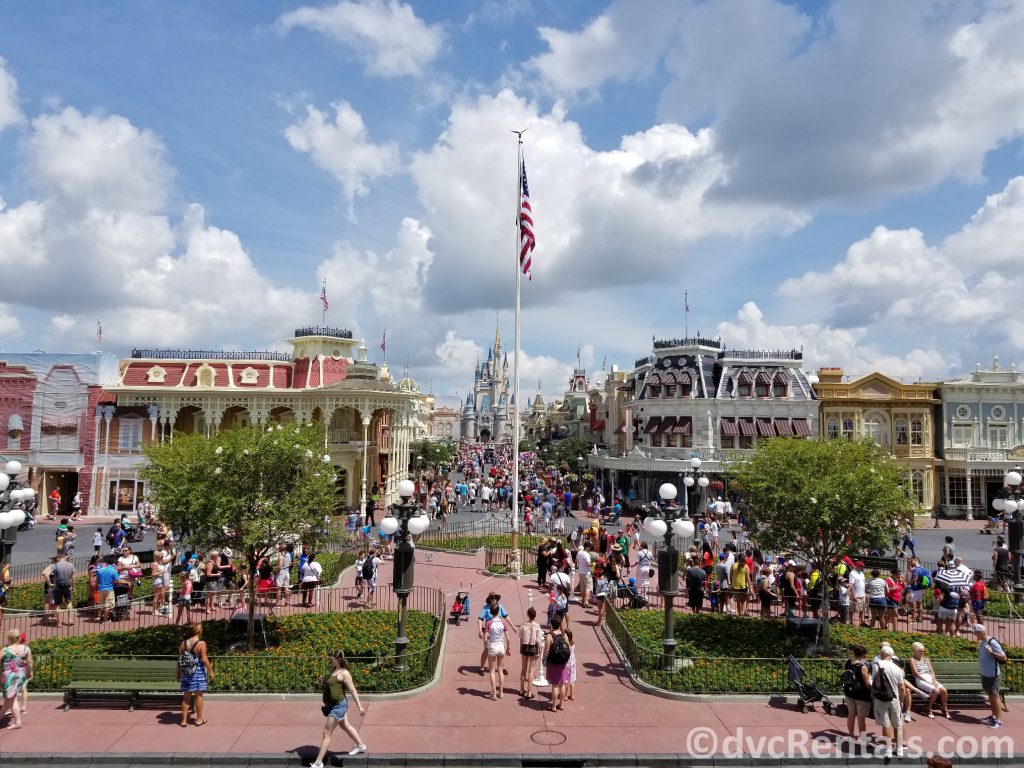 I have seen them in front of the Emporium; on the side of the Emporium (near City Hall); inside the Barbershop (if you are fortunate, you may get a concert along with your haircut!); inside Main Street Jewelers and in front of the Sweet Shop. They are usually outdoors, but if it’s very hot or it’s raining, I suggest you check the indoor areas I just mentioned.

The Dapper Dans have a very distinctive look, although their costumes can change for holidays and special occasions. Their traditional costume will have each Dan dressed in one of four colors, usually blue, green, purple, or orange. They wear solid color pants, with matching color striped vests, and on their heads, you’ll see straw hats. The band encircling each hat will match the color of the outfit that particular Dan is wearing. Since they play 7 days a week, there is a rotation of 12 Cast Members who are Dapper Dans, although naturally, as they are a quartet, guests will only see four members at a performance. During holidays, as mentioned above, their costumes will often change, and so will the songs they sing. Expect to hear Christmas songs in December, Halloween tunes in October, patriotic songs on the 4th of July.

During Mickey’s Not So Scary Halloween Party, the same folks who are Dapper Dans become the “Cadaver Dans.” They dress up in creepy costumes (one has a hatchet “implanted” in his head) and sing ghostly tunes. 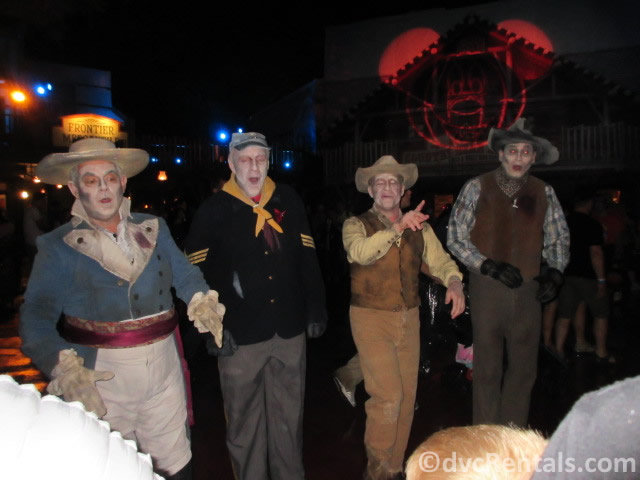 They are definitely more funny than scary, but small children might be scared of the costumes. The “standard” Dapper Dans are definitely fun for the whole family. On past Halloweens, the Dans have performed in the Diamond Horseshoe Jamboree (this is no longer the case). 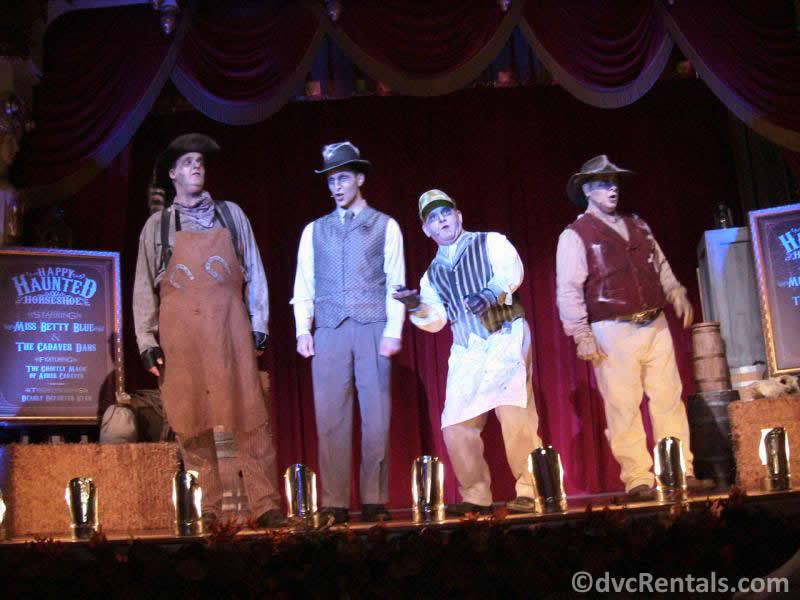 I have noticed some of the Dans have been the same for many years, but it is always fun to spot a new face. There are members from all age brackets currently in the group. The Dans sing Disney and Americana songs, not unlike the Voices of Liberty in Epcot. However, the Dapper Dans also add humor to their shows, stopping between songs to tell corny jokes and ask riddles. Most times, guests are asked to participate. For example, one of the Dans may say, “I will say Guess What, and you say What?”. Guests happily play along and are treated to a series of pun-filled jokes. For example (Dan) “Guess What” (Guests) “What?” (Dan) “What does Captain Hook say when he breaks up with a girlfriend? (Guests) What? (Dan) “It’s not you, it’s Smee” (groans and laughter follow). Also invoking laughter, they sing If You’re Happy and You Know it but add a verse: “If you’re happy and you know it give us a dollar!” And often in the end you will hear, “This is our favorite song. Why? Because it’s the last one!”

In addition to the fun and the singing, the Dans do a little tap dancing, and they play an instrument called an organ chime. This is a set of chimes that is handheld, makes melodic music when moved through the air. They are a very enjoyable addition to the show. Fun Fact: Each of the chimes has three octaves of a single note, comprising a C scale. The Organ Chimes were made in Chicago, Illinois around 1901, the year of Walt Disney was born! 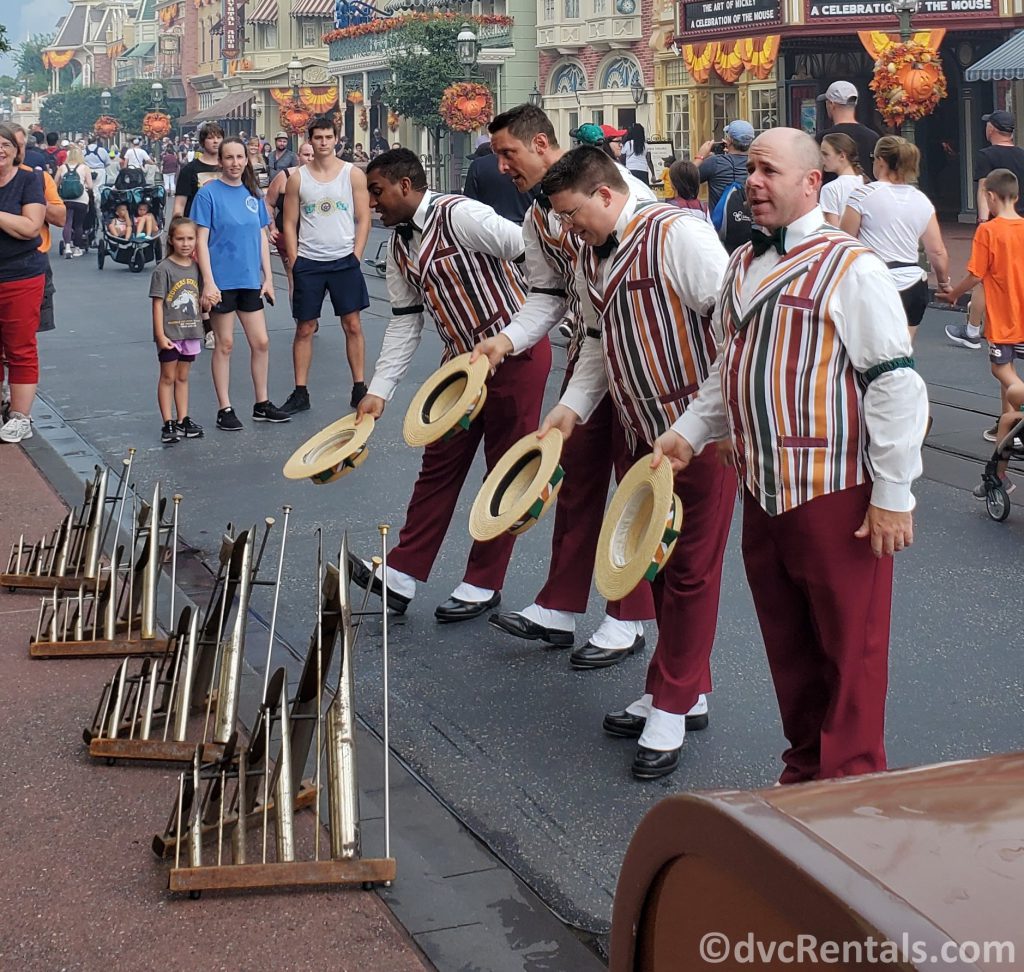 The Dapper Dans have inspired both pin sets and Vinylmation characters for guests to purchase. The various members are not just expected to sing well; they have to have the ability to be funny and engaging. Another must is they must be male. There are few roles at Walt Disney World that specify gender, but this is one of them. 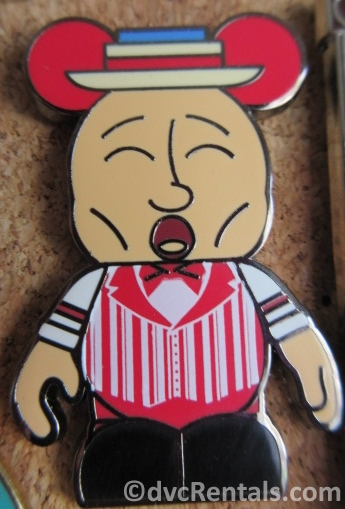 Generally, when the Dapper Dans have finished a show, they don’t stay around to pose for pictures. But they won’t mind if you stand next to them or behind them to pose while they are singing. The group will sometimes sing Happy Birthday to guests wearing birthday buttons. And if you are really lucky, you may become part of the show! One of my all-time magical moments occurred just last year at the Magic Kingdom. Sometimes the citizens of Main Street (the Fireman, aka Chief Smokey; The suffragette, and other Cast Members dressed in costumes reminiscent of the turn of the century), join in and sing with the Dapper Dans. I was thoroughly enjoying the Dans and Citizens performing Supercalifragilisticexpialidocious when suddenly Chief Smokey linked one of his arms to mine and his other arm to another guest. He brought us into the show, and we sang the song with them while doing a kick line. It was SO MUCH FUN. 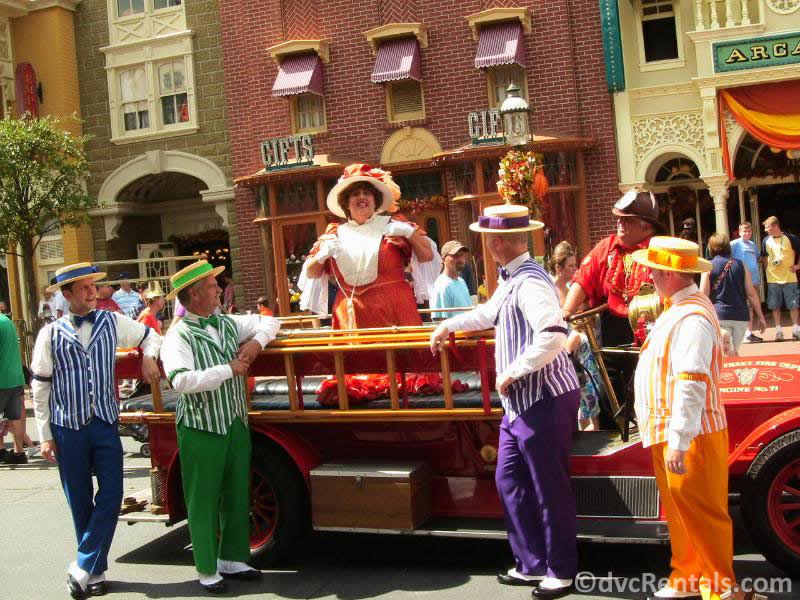 Naturally, the friend I was with had just left to get something to eat, so I have no pictures, but I sure do have a wonderful memory!

I am sure many of you reading this have had the opportunity to enjoy the Dapper Dans. I hope if you have passed them by, you decide to stay awhile and listen and enjoy them next time you’re at the Magic Kingdom. And I hope this quartet remains a fixture at Walt Disney World for many, many years to come! 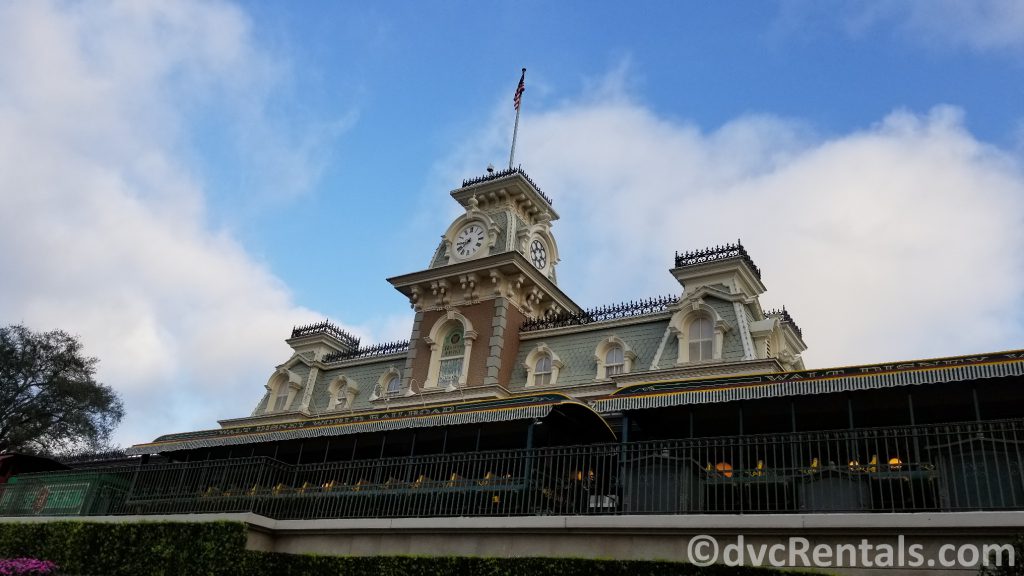