Available opening day at Epcot on October 1, 1982, the American Adventure is the main attraction in the USA pavilion in the World Showcase. 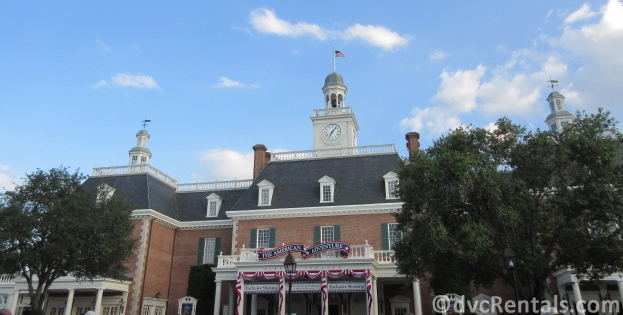 The show went through a number of changes before the Imagineers could agree on how it would be presented. One concept was for a dark ride with music, with the scenes and music portraying American culture in a fun way. Another was for a similar ride, but one that would take on a more serious tone. One suggestion, putting Benjamin Franklin, Mark Twain, and Will Rogers (who appears in the final version, but in a much smaller role than Twain and Franklin), together to tell the story of America, was found to be agreeable. This led to the show we still see today. Minor changes have been made throughout the years, as the sets are huge and very expensive. The main changes have been to the movie montage at the end of the show (more about that later). 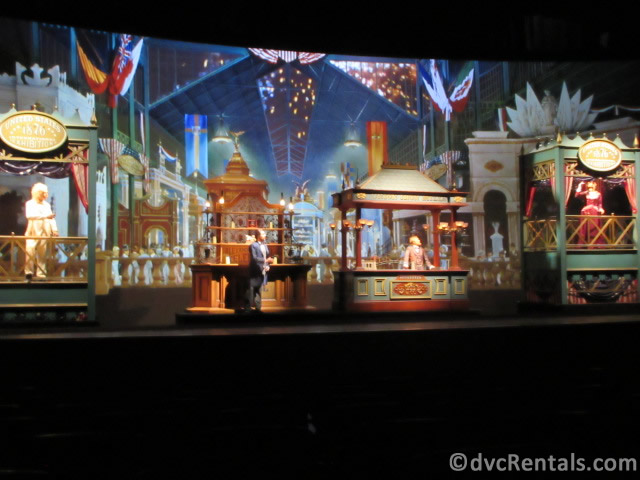 To reach the theater, guests walk up a stairway or take an escalator, through an area filled with American Flags –44 in total– from different times of American history. Generally, a Cast Member leads the way and will often talk about the flags. There is one of each flag that the United States has flown. For guests in wheelchairs, there is an elevator to take you to the second floor. 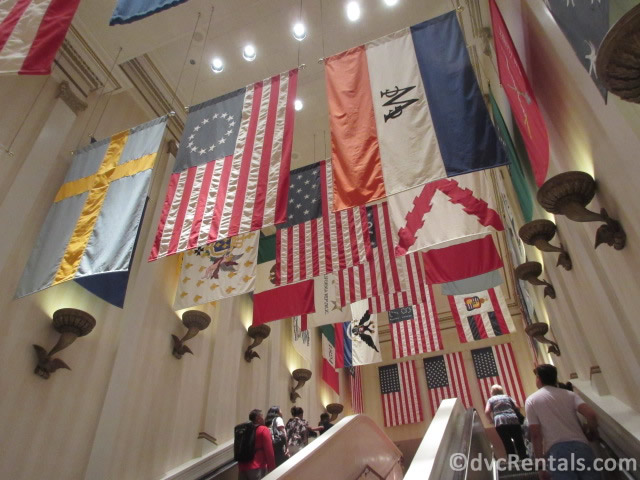 The theater for this attraction is huge, and it is virtually impossible not to get a seat, even at the busiest times. The capacity is over 1000 guests! Like all Disney attractions, there are no “bad” seats; you can see everything, no matter where you are sitting. The American Adventure is a multimedia show, narrated by very life-like Audio-Animatronic figures of Benjamin Franklin and Mark Twain. The show starts with us hearing their voices coming from behind a curtain. The curtain parts and we see the two men having a discussion about the beginnings of America (Fun Fact: In actuality, the two of them lived more than 100 years apart). Periodically throughout the performance, we hear and see more of Franklin and Twain. 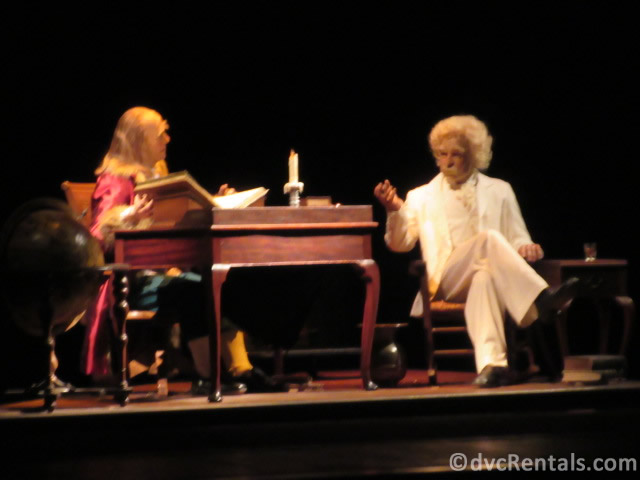 From there, we continue to watch how America has changed over time. The show moves seamlessly from audio-animatronics to film and back again, with very moving music accompanying many of the scenes. The movie screen itself is very impressive; it is the largest rear-projection screen in existence. Additionally, the show contains some of the most interesting audio-animatronics in Walt Disney World. Ben Franklin walks up steps! Will Rogers twirls a lasso! 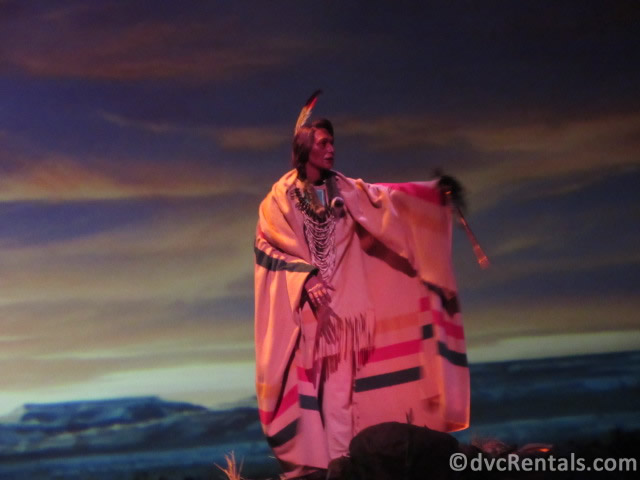 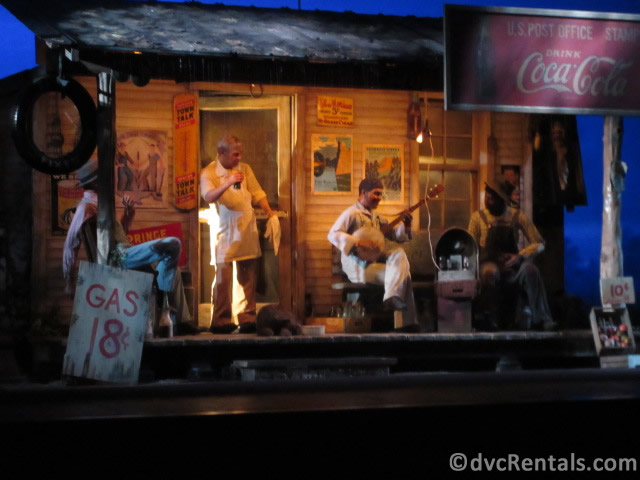 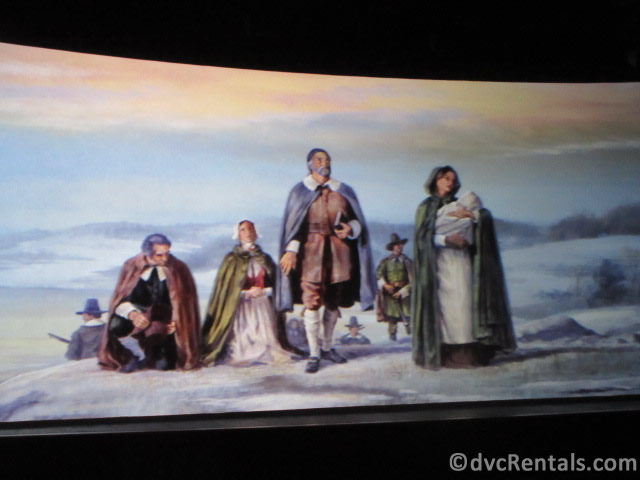 The background scenes for each part of the show move smoothly from one to the other. There is a huge machine (kept out of sight from guests) known as the “warhorse,” which takes down the previous scene and elevates the current one for guests viewing the show. Ten different sets are stored under the stage and are moved forward or backward as needed.

The attraction showcases events like the landing of the Mayflower; the Boston Tea Party; Valley Forge; the Declaration of Independence; the Civil War; Advances in Technology; the Great Depression; WWII; Creating National Parks; and more. Although most of the show concentrates on the positive aspect of the USA, it is not all rosy. Slavery, Native Americans being chased off their land, and Women’s fight to vote are all covered in the show. 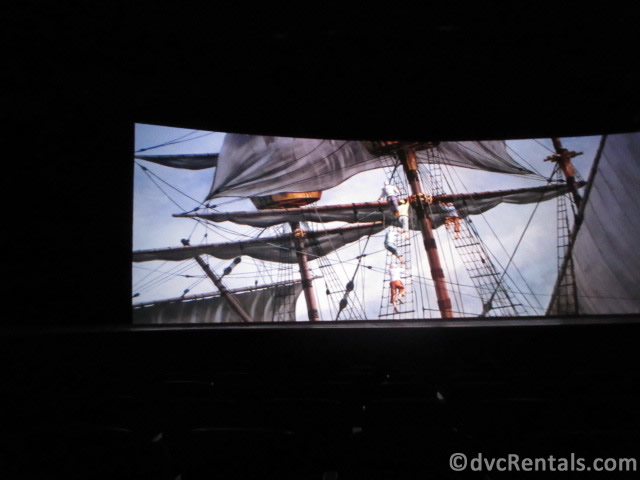 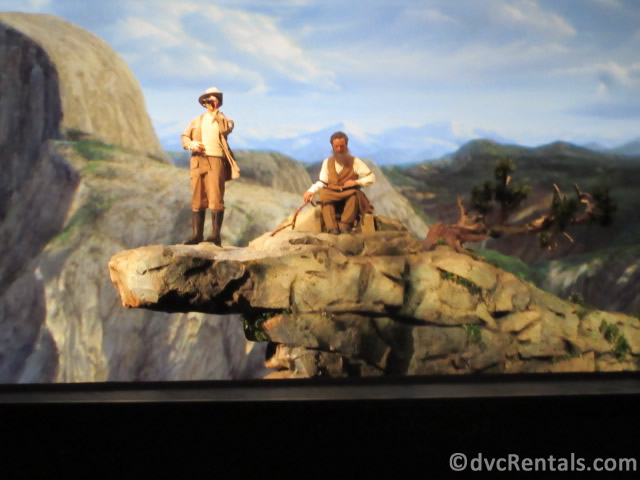 As mentioned earlier, many scenes contain music, some uplifting, some very sad. The song Two Brothers, about a Civil War time family where one son becomes a fighter for the North and the other for the South, is heartbreaking. Golden Dream, the song played during the finale, is very inspiring. 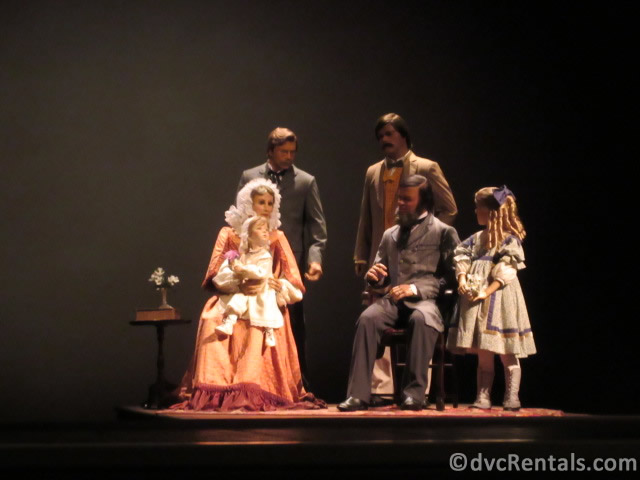 Once we reach WWII and a final scene with Rosie the Riveter, we hear music well up, and one final song begins, The Golden Dream. 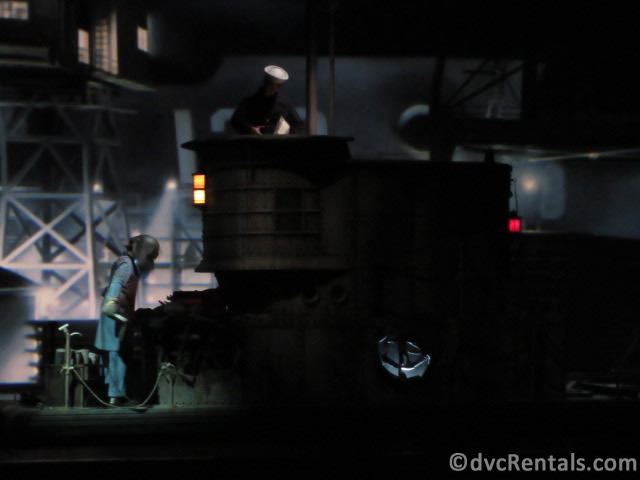 The song starts with the words “America, spread your golden wings, sail on freedom’s wind, ‘cross the sky, Great bird, with your golden dream Flying High, Flying High, America”! As the song plays, we see well known Americans/events appear on the screen for a few seconds each, fading out, and then others fade in. Sometimes more than one person appears on screen at the same time; you have to really pay attention to see everything and everyone. The montage has included (this not all-inclusive): Rosa Parks; Marilyn Monroe; Johnny Cash; Lucille Ball; Walt Disney; Leonard Bernstein; Frank Sinatra; Louis Armstrong; JFK, Martin Luther King Jr; Bob Dylan, Alex Haley; Jim Henson; George Lucas; Sandra Day O’Connor and Muhammed Ali. We see scenes from The Vietnam War Memorial, Apollo 11 Moon Landing, and more. 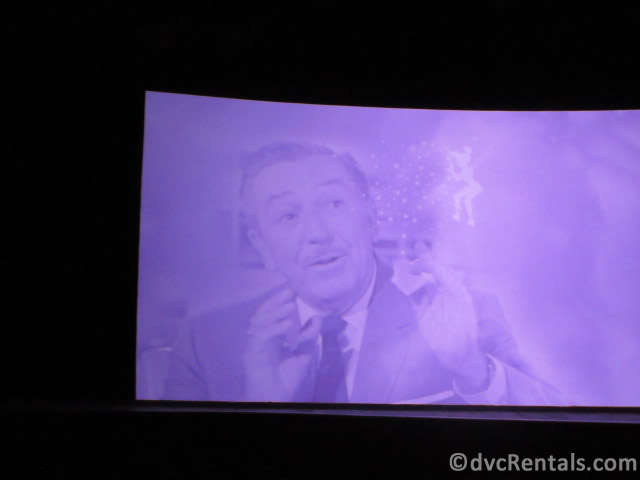 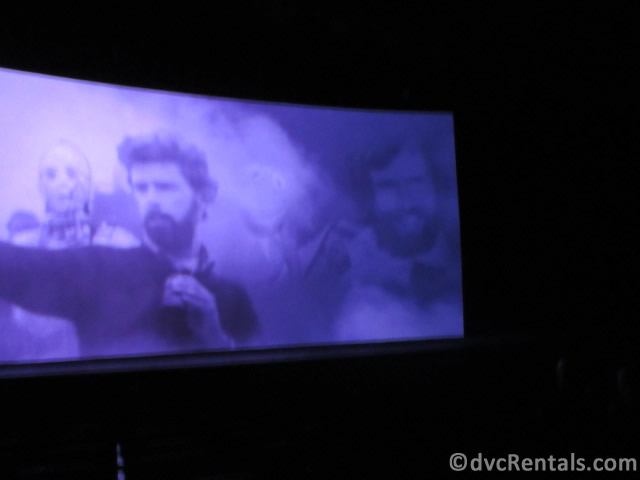 The montage has changed a few times over the years, mostly to add people to keep it current. It is longer now than when it first debuted. They have also removed some people who are less well known now. Newly added Americans to the film in 2018 included (but are not limited to) composer John Williams; Neil deGrasse Tyson; Bill and Melinda Gates; Barack and Michelle Obama, Madonna; Mark Zuckerberg; Quincy Jones; Beyonce; Serena and Venus Williams; and LeBron James. In addition, the song “Golden Dream” was re-recorded with new orchestration.

I find the finale of the montage and the song very touching and have been moved to tears more than once while experiencing it. When the film montage ends, Franklin and Twain appear standing on the torch of the Statue of Liberty. They say a few words and wave goodbye, as we see the statues symbolizing American ideals (mentioned earlier) spotlighted along the sides of the theatre. This is followed by the curtains closing and applause from the audience. 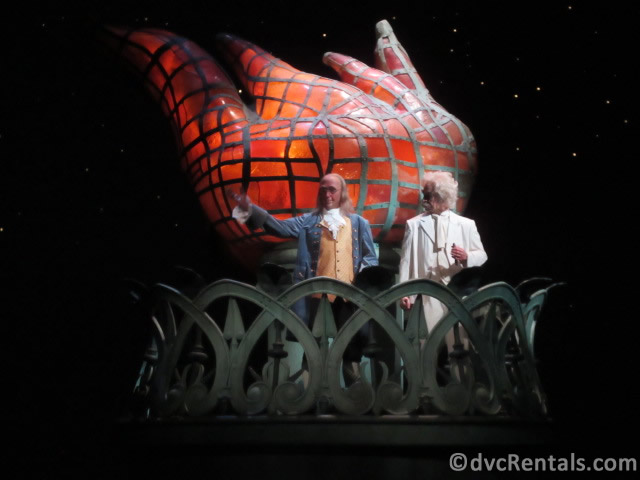 Disney’s attention to detail is evident in the speeches and broadcasts used throughout the show. They use the original words and, where available, the actual voice recordings of people in the attraction. I was stunned to be watching a documentary about John Muir on TV when I heard quotes from the American Adventure. Disney used his actual words, “What will our children inherit, seedlings?”. Another interesting fact: Since the camera was not invented until the Civil War time, all the scenes prior to that are paintings. Afterward, we see photographs of events. 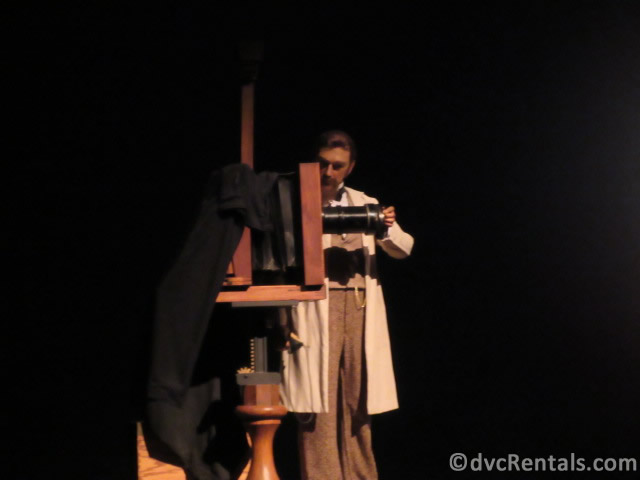 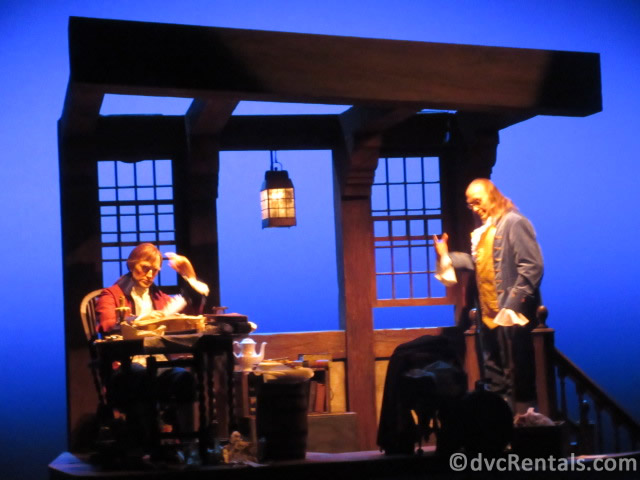 A heads up: This attraction is long, just under 30 minutes. So, if you would like to experience the show and you’re in a hurry, come back when you have more time. There are multiple showings a day; check the Epcot times guide when you visit. I happen to really enjoy history, so The American Adventure is a favorite of mine. You can leave during the show by exiting the doors on the left if you find this is not for you, or you have a child who is making a racket. Fast Pass is not offered, nor is it needed for this experience. As mentioned earlier, the theater is huge. 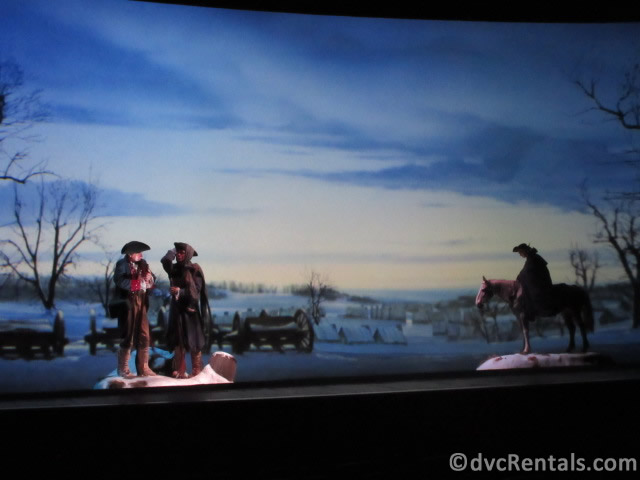