It’s that time again! The favorite festival of many Disney fans has begun, and its last day is November 19 this year. The Epcot International Food and Wine Festival first began in 1996 and has grown and become more and more popular each year. This year’s festival sponsor is Corkcicle. For those who may have never attended, this festival has quite a number of food booths encircling Epcot’s World Showcase, as well as booths throughout the other areas of the park. Each booth showcases cuisine from a different country. Some are countries always found at Epcot; others showcase foods from other parts of the world. Most booths have small plates of food, as well as desserts and alcoholic and non-alcoholic beverages. Additionally, guests will find a scavenger hunt, concerts, and specialty-themed merchandise for the festival. Entrance to the festival is included with your park ticket. Food and some other items require additional fees. That’s the overview; now, let’s get into the details! 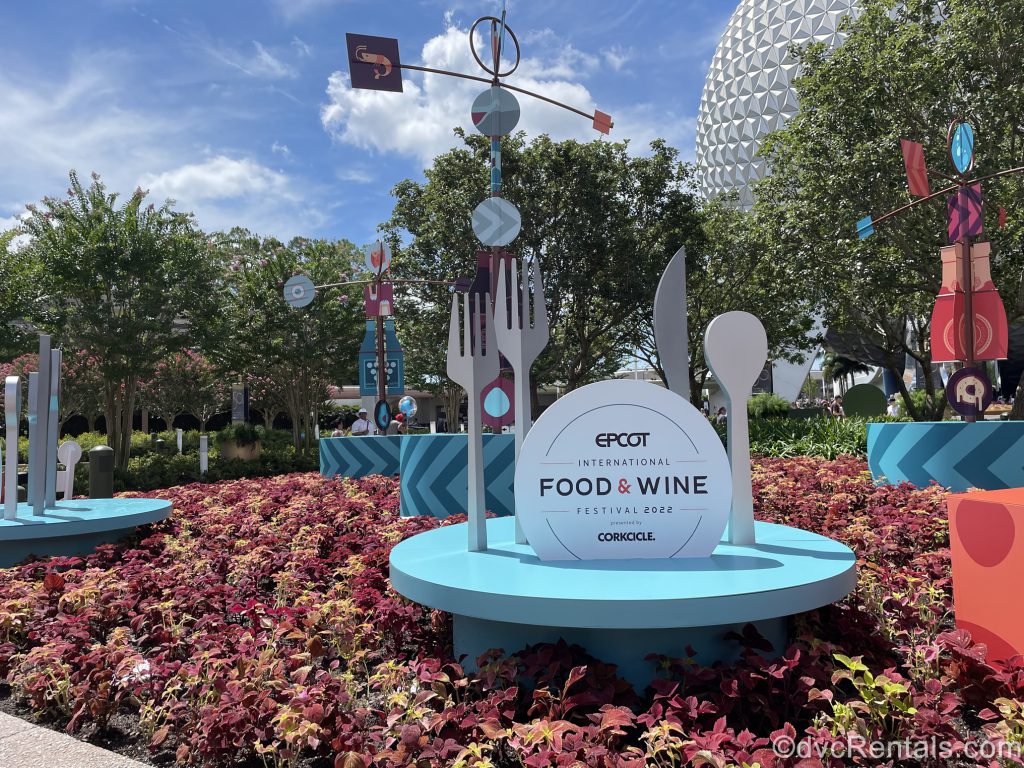 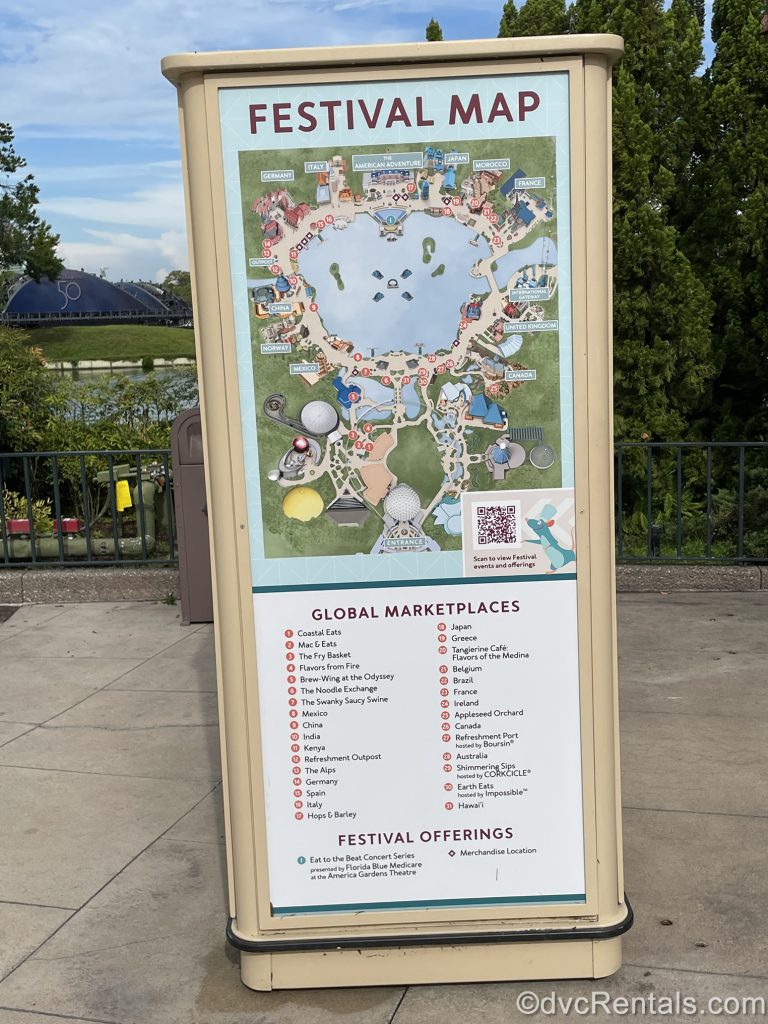 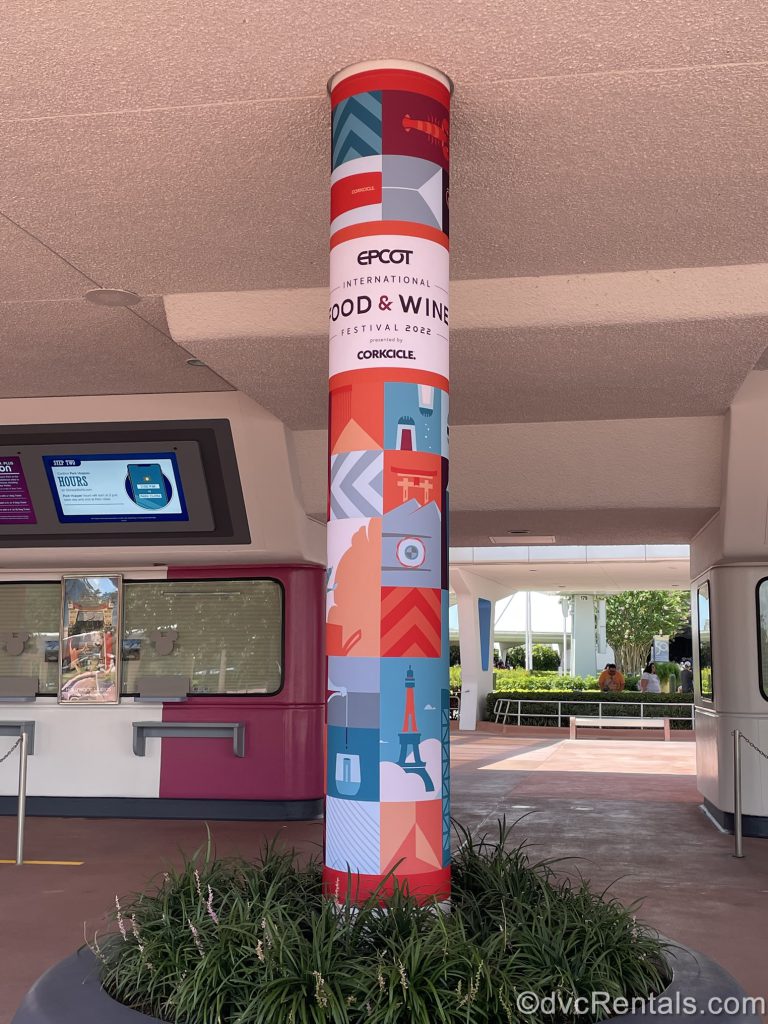 First, when you enter the park, be sure to grab at least one Festival Passport. They are free. The passport is full of pertinent information; it will come in handy to see all that’s offered and to find what you are looking for. There are more than 25 food booths this year. Although only one is completely new, many of those returning have new food options to choose from. 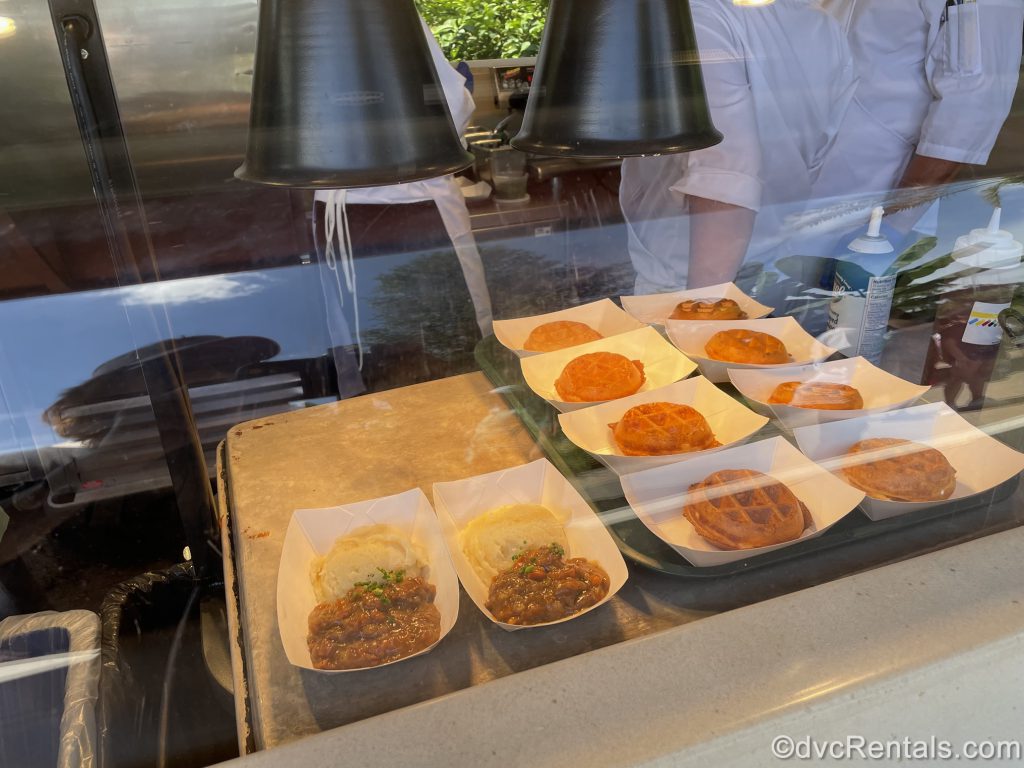 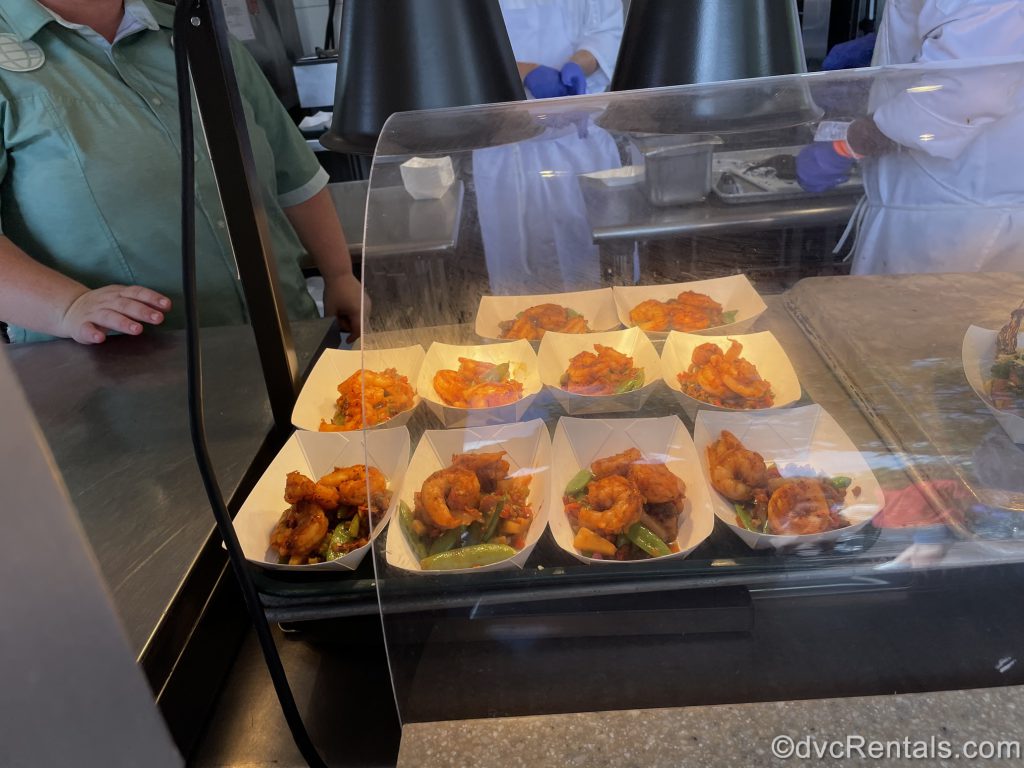 The booth that is making its debut this year is called The Fry Basket and is located near Test Track. Offerings include Yucca fries, as well as a “Fry Flight” served with three flavors: Sea Salt and Malt Vinegar; Sweet Potato Casserole; and Barbecued Bacon Fries.

As mentioned above, a number of returning booths have some new choices to try. A few examples: A new version of the “impossible meatball” at Earth Eats (near the Port of Entry Shop on World Showcase Plaza); Italy has two types of dumplings as well as orange blossom Pana Cotta; Appleseed Orchard (Canada) has Playalinda Brewing Caramel Apple Pie Ale; Greece (between Morocco and Japan) offers a lamb gyro (past years it was chicken gyro); Hops and Barley (America) has a Chesapeake Crab Slider; India (near China) offers Paneer, Samosa and Chicken Tikka Masala; Flavors from Fire (close to Test Track) has Rocky Road Chocolate Cake; Swanky Sauce Swine (near Disney Traders store on World Showcase Plaza) has a grilled pork shoulder wrap; Brew Wing (between Mexico and Test Track) offers chicken wings three ways: Sticky wings with Peanut Sauce, Siracha lime wings, and Jerk spice. This list is far from complete, and it’s nice to see so many new options. Oh, and there are plenty of new beverages to try, both alcoholic and non-alcoholic! 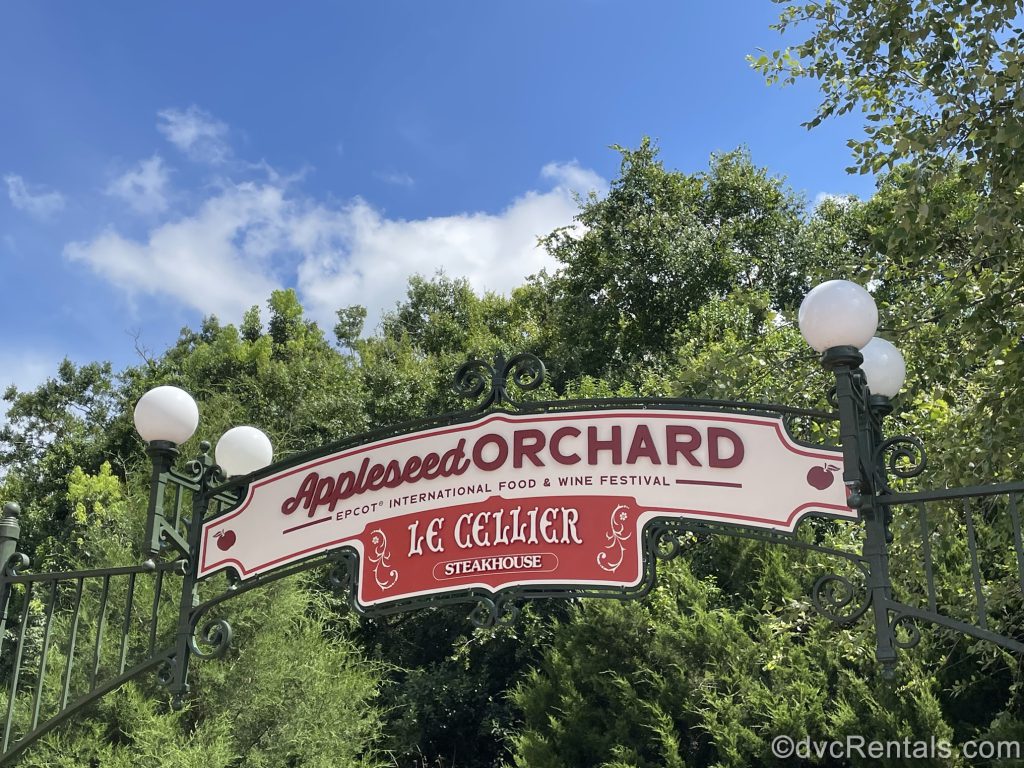 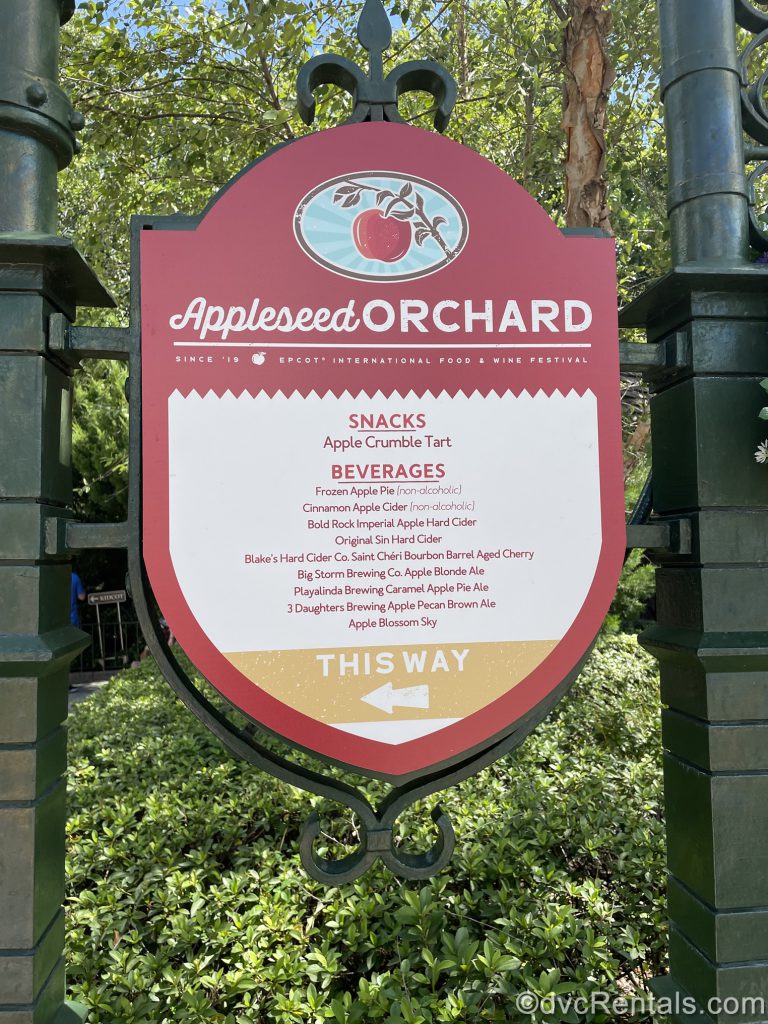 A very popular part of the festival is the Eat to the Beat Concert Series, included with admission to Epcot. Most bands play for two days, and on each of those days, they perform three shows at the American Gardens Theatre by the American pavilion. These concerts can be seen nightly during the festival, at 5:30pm, 6:45pm, and 8:00pm. Some of the groups are very well known, and many return year after year. There are a few new additions this year, including Ray Parker Jr and Hoobastank. Returning favorites include Air Supply; Hanson; Billy Ocean; Kenny G; Sugar Ray. Disney offers special dining packages with guaranteed seating for the Eat to the Beat Concerts. For more information about the packages, as well as a complete list of performers, click here:

Of course, there is always plenty of merchandise available for purchase. Remy from Ratatouille is very well represented, as he is this year’s festival mascot. There are Remy shirts, hats, dishes, and more available to buy. (You will see Remy on all the festival signs and in displays in front of Epcot as well as on the promenade as you enter World Showcase). Orange bird merchandise is also plentiful, and there is also a series of items for sale starring “Chef Mickey and Minnie.” Guests will also see a number of Princess Tiana and Chef Figment items are offered for purchase. There are booths all around World Showcase with the merchandise. There is also a good amount of Food and Wine Festival merchandise at the Creations shop. 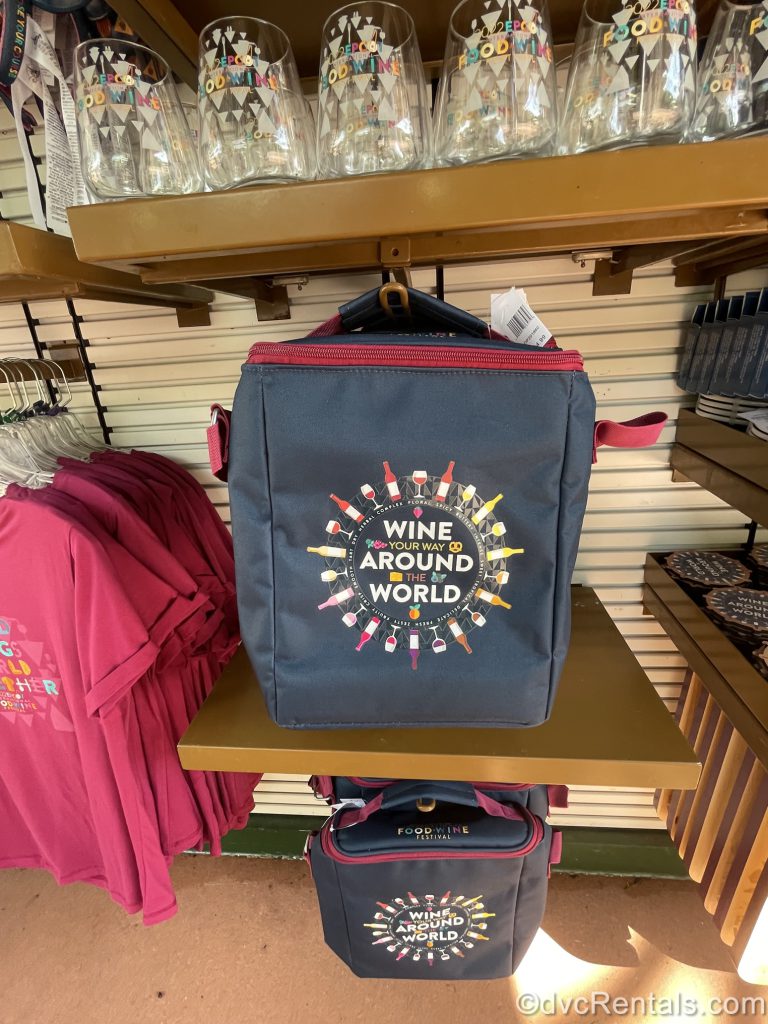 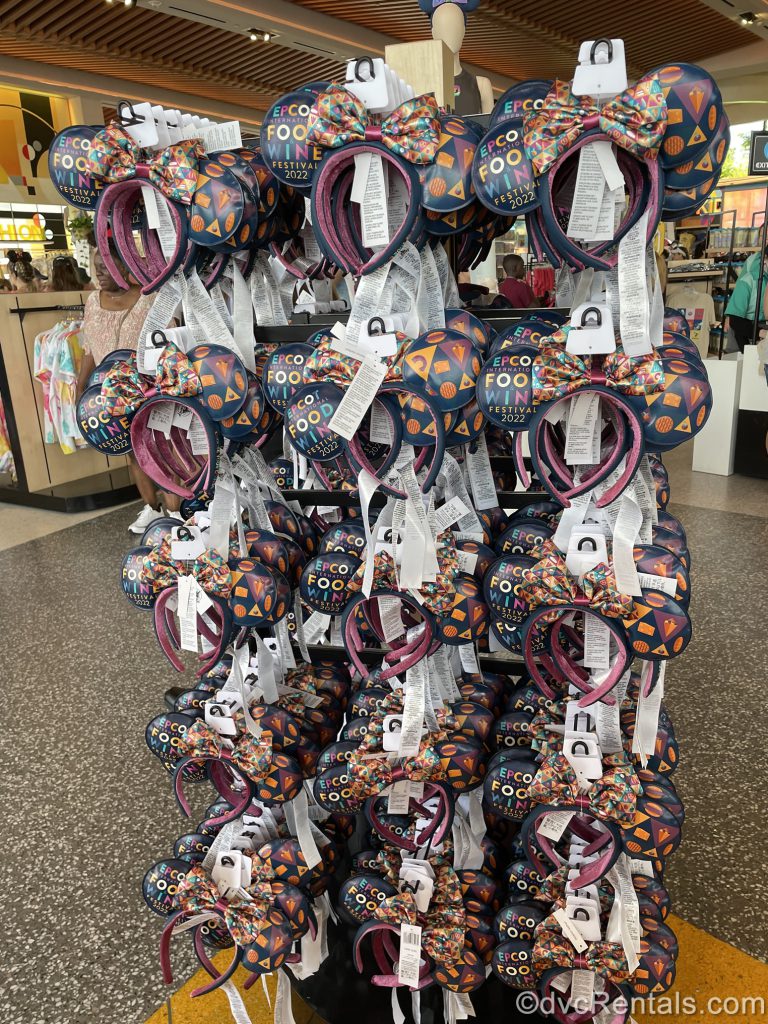 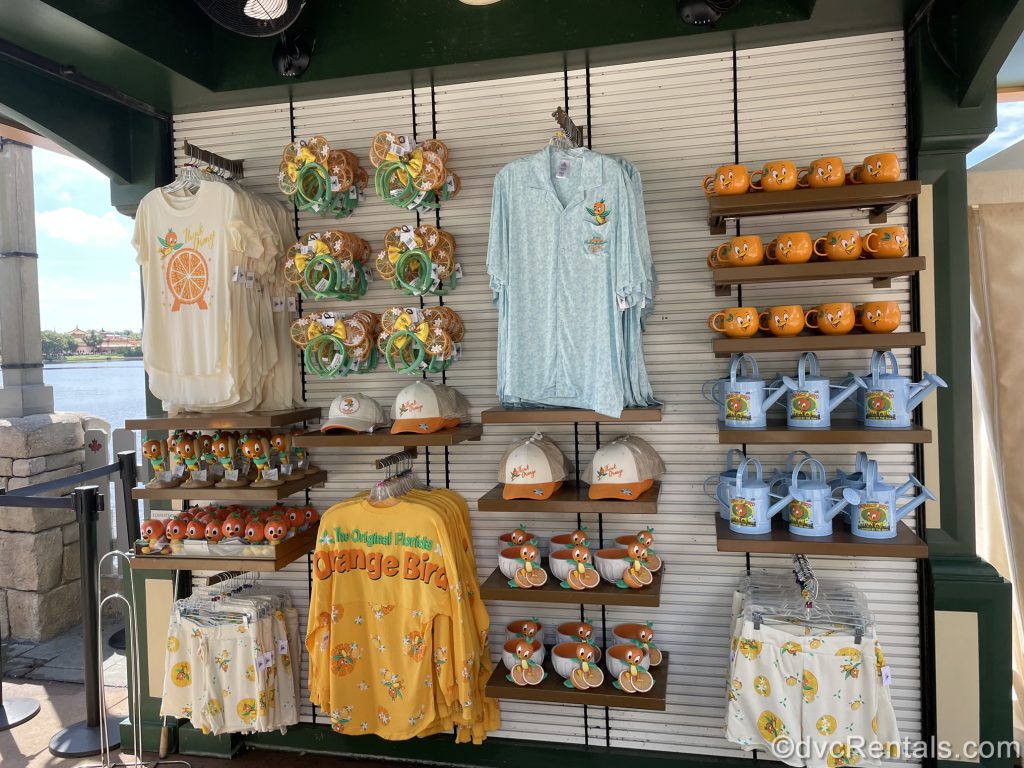 Fun for the whole family, Remy’s Ratatouille Hide & Squeak is a scavenger hunt. Remy is “hidden” throughout World Showcase, and guests can look for him as they make their way “around the world.” There are 15 Remys in total to be found. To play, a map with stickers can be purchased at:

When you find a Remy, you put a sticker on the map, and once the map is completed, guests can return it to any of the places listed below for a prize: (No worries, if you do not complete the map, you will still get a prize!):

As an FYI, you do not have to purchase the map and stickers. You can still hunt for Remy for fun and keep your eyes open; sometimes, he can be tricky to find. If you do opt for the map and prize, the cost is $9.99. This year’s prize is a choice of four reusable cups. Guests can choose from Remy, Tiana, Figment, and Mickey. Remy’s brother Emile invites you to try five special items from the festival. Guests choose at least five from ten tasty dishes listed in the Festival passport. Once a dish listed is purchased, don’t forget to have your Passport stamped by the cast member behind the cash register. When you have a minimum of five stamps, head over to Simmering Sips on the World Showcase Plaza for a prize–strawberry cheesecake DOLE whip in a collectible glass cup.