(WARNING! THERE ARE A NUMBER OF SPOILERS IN THIS BLOG!)

I retired from being a Walt Disney World Cast Member in December of last year. Although I do have an annual pass, I was not selected to be one of those invited to preview the new Star Wars Land at Disney’s Hollywood Studios. But I was lucky, a Cast Member friend of mine invited me to join her to see a preview, and of course, I said YES! 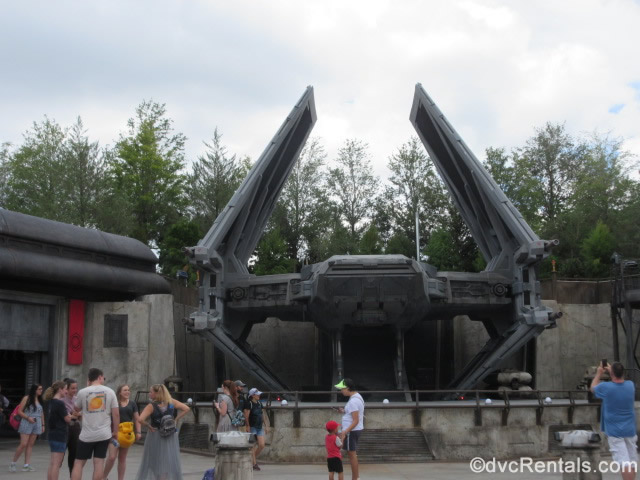 We went on August 14th, and this blog is about my experience in the new area, officially named “Star Wars: Galaxy’s Edge.”  Once the land opens to the general public some things may be added, but this blog discusses what we know now. 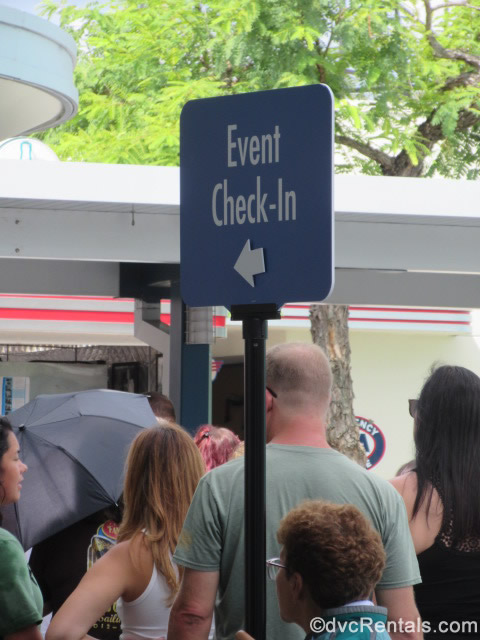 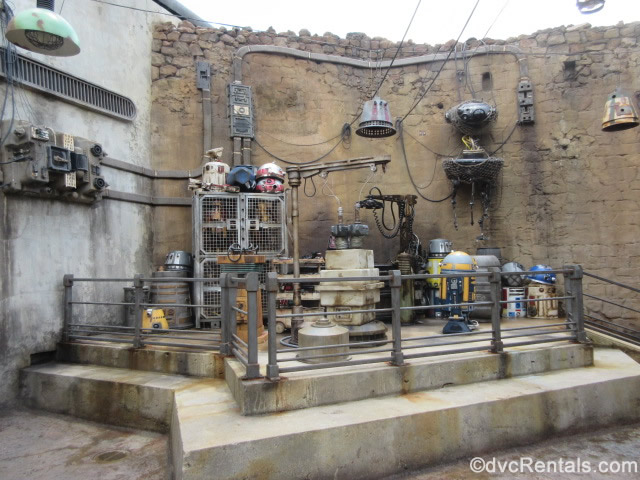 First, let me say that the previews were handled very well. They really limited the number of people allowed in, and the amount of time we could stay (four hours). I have not seen any part of Walt Disney World with so few people in over ten years. Even though there was only one attraction available (one more is in the works at the time I am writing this), “Millennium Falcon: Smugglers Run,” was a complete walk-on. My friend and I were able to go on four times in a row with no wait at all. 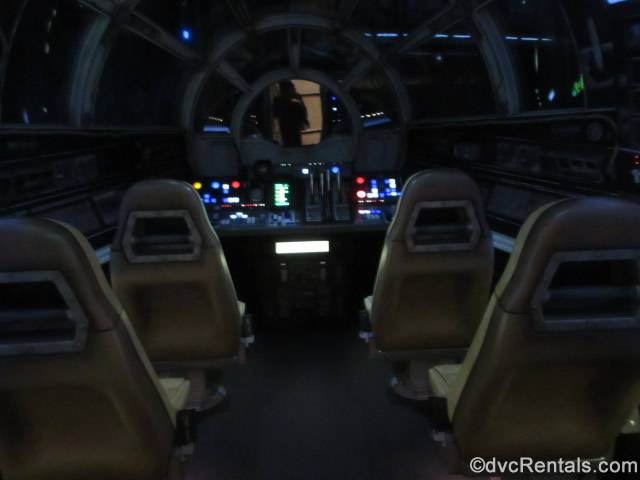 The land itself was not crowded at all, upon seeing my photos, one of my friends asked if we were the only ones there!  The only wait we had was to get into the bar, Oga’s Cantina, probably because it is not very large. Even then, the wait was only ten minutes. All of the Cast Members were amazing. They were totally in character, very interactive with guests, and seemed to be very pleased to be there. 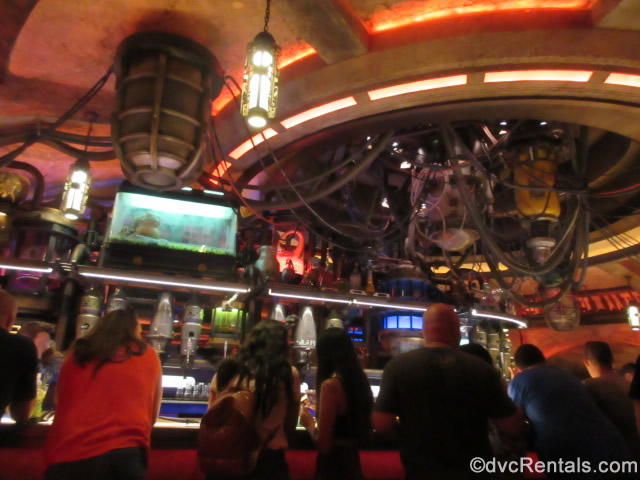 Like all Walt Disney World lands and attractions, there is a back story here. Rather than try to re-create any of the well-known lands from the Star Wars series, the Imagineers decided to make this a completely new land. Located on the planet Batuu, it is considered a remote frontier outpost. Although you will recognize many props from Star Wars movies you have watched, you will also be experiencing a whole new location, never before seen. 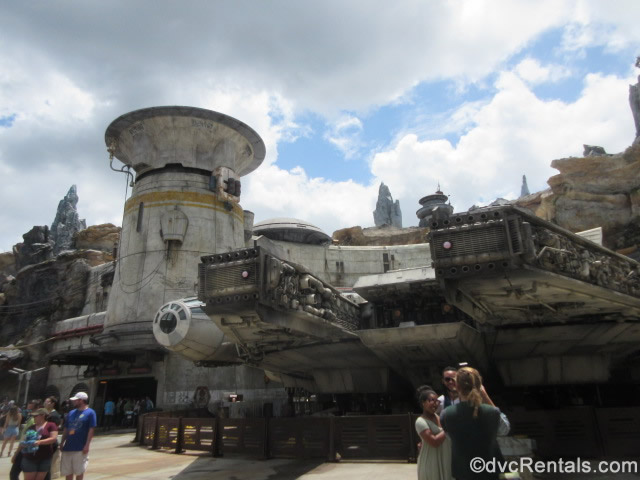 There are “good guys” (and gals) as well as some bad ones; they made sure not to take the “war” out of Star Wars. During the preview, there were no official Meet and Greets, but I saw Chewbacca and Rey out and about when I visited, and also some Stormtroopers. 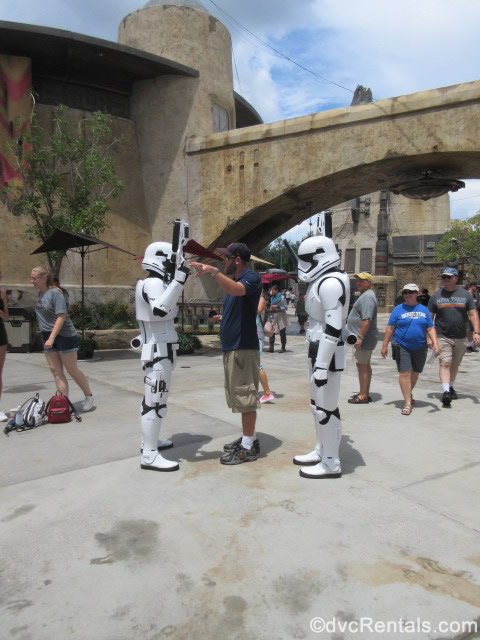 The new land is located behind Muppetvision 3D in Disney’s Hollywood Studios. Once you enter, you truly are transported to a different world and feel completely immersed in the experience. I was delighted to see that Disney Imagineers did an amazing job; the land itself is so interesting and has so much to see. Compared to the two most recently added lands, Pandora and Toy Story, I thought this one was definitely the most impressive to walk around, the details are fantastic. There is also plenty of shade and places to get out of the sun, as well as a number of air-conditioned buildings, a big plus. Galaxy’s Edge is set up as a circular land; it’s easy to find your way around. 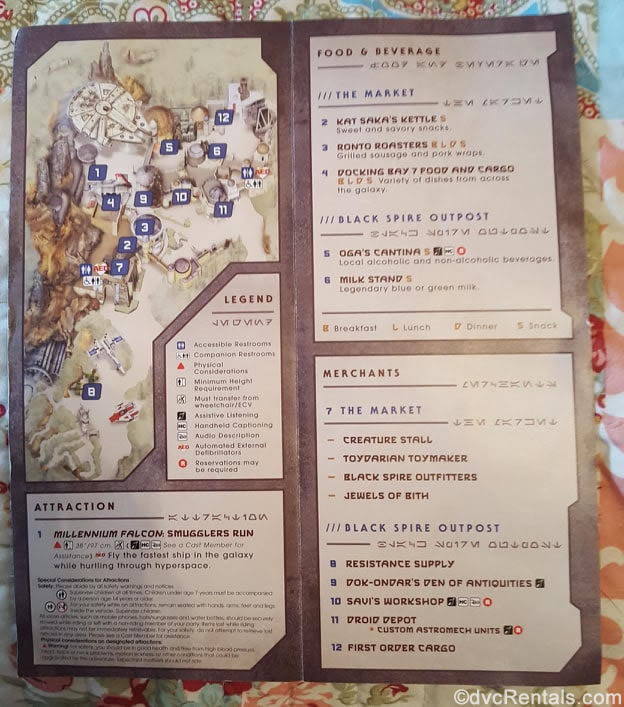 Most of the places to eat are all located in the same area. There is a large counter service indoor area, and some smaller food kiosks as well. The majority of shops are in the same location too. 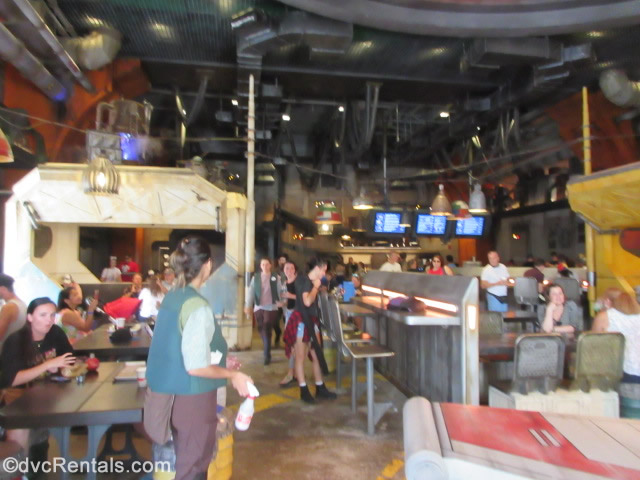 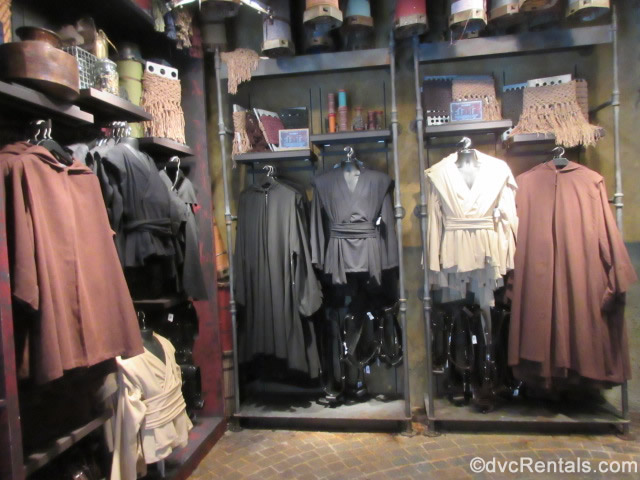 There are a few specialty shops located in other areas, most notably Savi’s Workshop (build your own lightsaber) and Droid Depot (custom build a Droid). These two shops are both in an area called Black Spire Outpost. 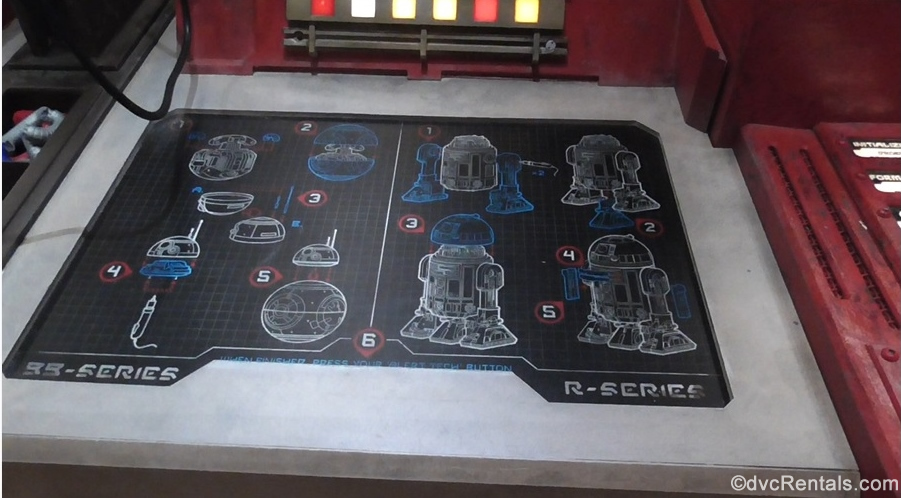 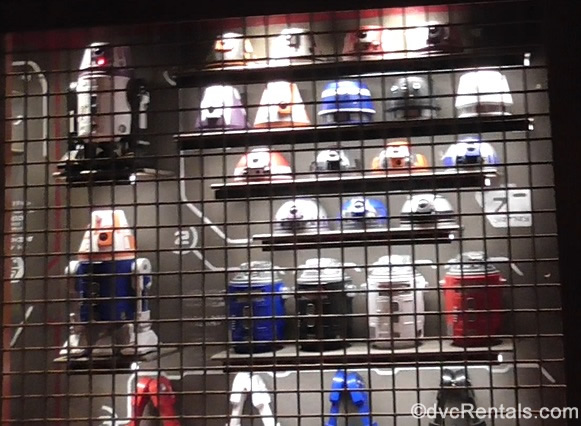 Oga’s Cantina, serving both alcoholic and non-alcoholic beverages are also found in the Black Spire Outpost. The theming of the bar is wonderful; it’s a fascinating place to see. There are a variety of drinks that are interesting and creative. One comes served in a petri dish (non-alcoholic, “Oga’s Obsession”), and another has foam that makes your lips and tongue numb (alcoholic, “Fuzzy Tauntaun”). If you sit at the bar you will be served by a bartender; if you are at a table, a server will take your order and bring it to you. You may be seated with other guests if your party is small. (There is room for about 8 guests per table).

The most exciting part for most guests is the new attraction, Millennium Falcon: Smugglers Run. 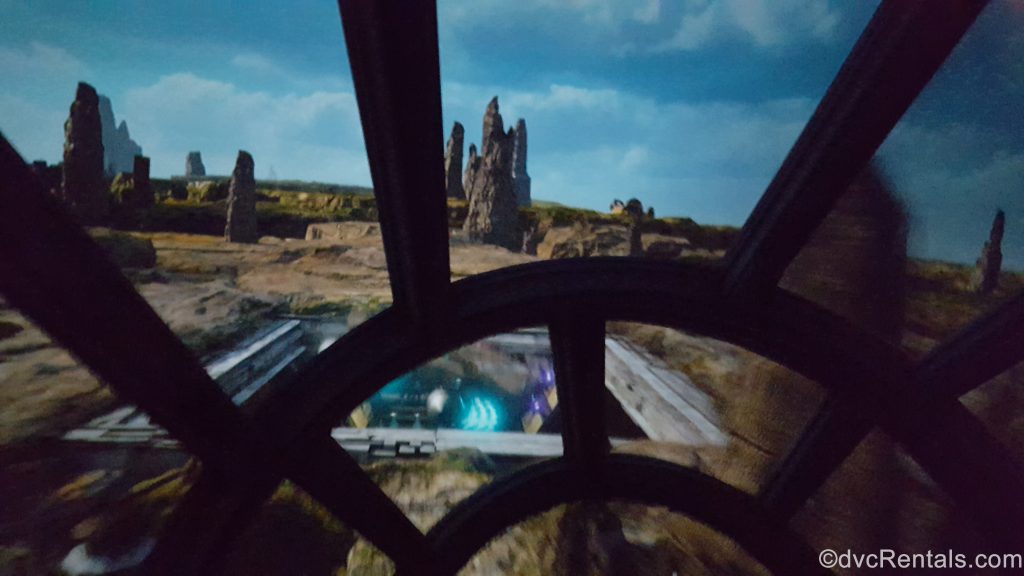 This is a motion simulator ride, but I did not find it anywhere near as intense as Star Tours (which sometimes gives me vertigo).  It is a little bumpy, especially if you are seated in the back, but I had no issues with feeling ill.  My friend who I went with agreed that she too had no problems with motion sickness or vertigo on Smugglers Run. I think that is a plus for many, but some guests may be disappointed. If you are looking for a true thrill ride you may not feel this attraction is on par with others at Walt Disney World, such as Flights of Passage or Expedition Everest.

However, what is missing in thrills is more than made up for by the experience of the attraction. The queue is very long and has so much to see!  There are so many details I could not possibly list them all in one blog. As the planet is considered an outpost, as you head along the queue there are all sorts of props to delight guests. Along one hallway, there is a huge glass window to look out, and the view of the land and part of the Millennium Falcon is awesome. 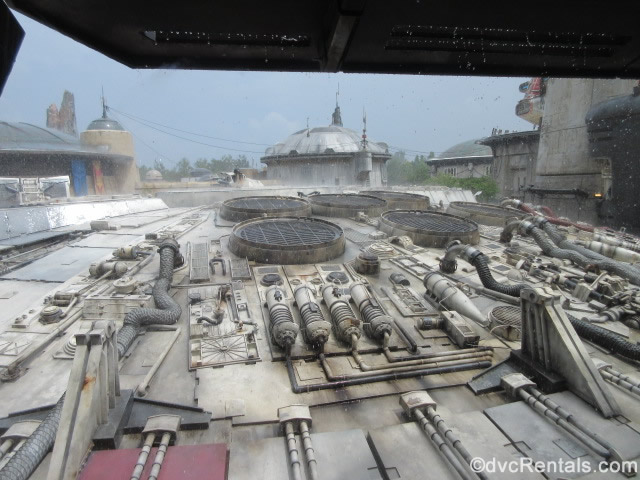 After you have walked through the queue, the first room you enter explains why you are there and what your mission is. (For those who do not know Star Wars characters I have tried to not mention too many so far, but it’s impossible not to mention some here). Chewbacca has flown the Millennium Falcon to the Black Spire Outpost for repairs. In exchange for the parts he needs, Chewbacca lets a smuggler, Hondo Ohnaka, borrow the Millennium Falcon for a mission. Chewbacca only appears on screen; Hondo appears in person. He asks for help from guests as he has more cargo than he can handle and needs extra flight crews.  Hondo explains a bit about what you will expect to do and see when you join the mission. 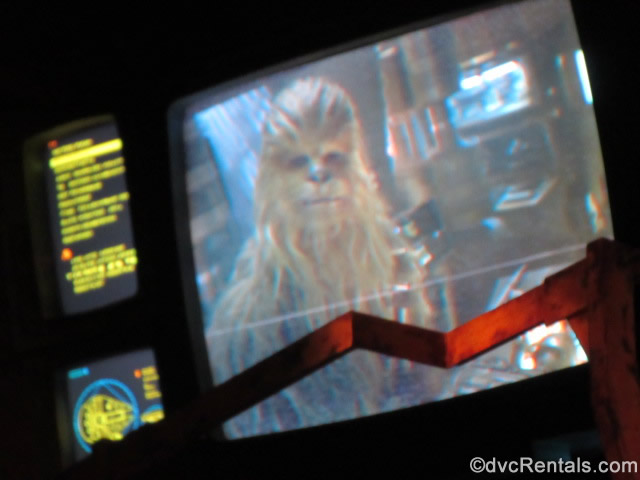 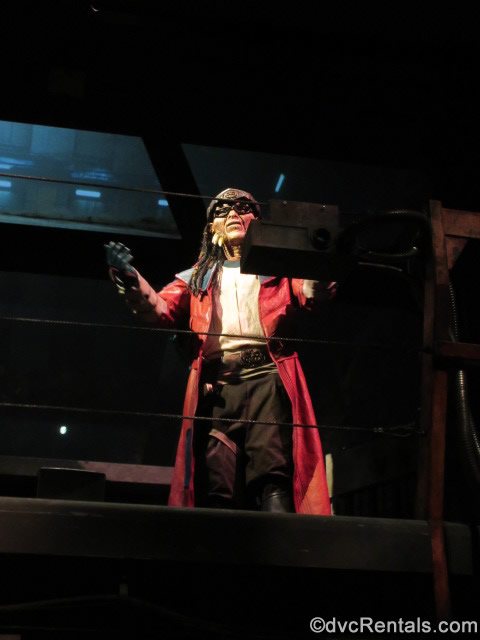 In the next area, a CM will hand you a card telling you what your job will be for your mission on the Falcon. There are 2 each of Pilot, Gunner, and Engineer. You head into another room, designated as a lounge, to wait to enter the ship and perform your assigned task. Again, lots of details here. 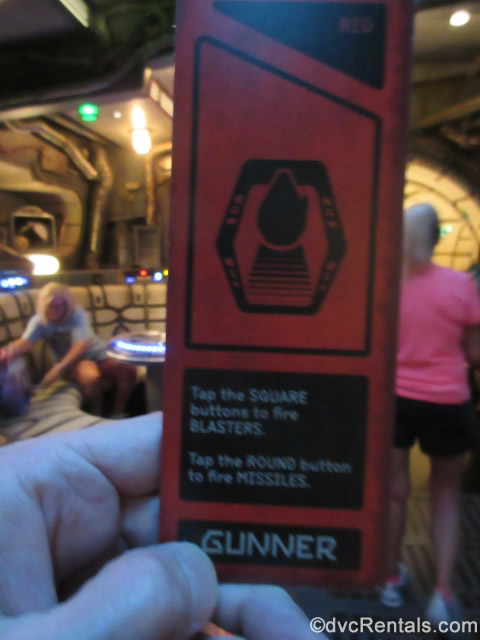 Next, you board the ship and take your seat, Pilots in the front, engineers in the middle and gunners in the rear. You take off, and as the flight goes along you are instructed to push buttons that will either steer, fire guns, or do engineering tasks. All the while the ship flies along, trying to stay out of trouble and land safely.  I thought it was a lot of fun, the only issue being if you are really trying hard to push the right buttons when instructed you can miss some of scenes in the voyage.  The ride itself, once you have entered the part where you are “flying,” lasts about five minutes.

When the ride opens to the public on August 29th of this year, expect the crowds to be huge, as Star Wars is extremely popular. At the start no Fast Passes will be available for Smugglers Run, so be prepared to wait if you decide to experience it. Hopefully, this will change in time, but so far I have not seen any official word on this. But honestly, just walking around Galaxy’s Edge is an experience in itself. 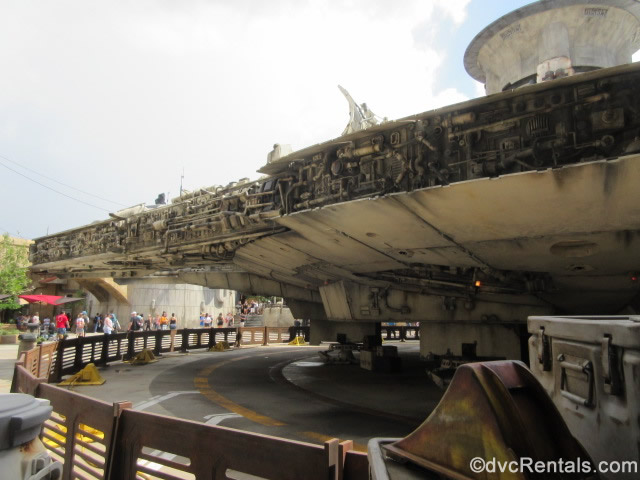 Other things to know about Galaxy’s Edge: