Disney World is a special place year-round, but at Christmas, the Imagineers kick it up a notch, decking the parks and resorts with boughs of holly, bows, lights, Christmas trees, poinsettias, the works. My family had never traveled to Disney during Christmas and so everyone was extremely excited about all of the offerings. Before our trip, I had done research on the different shows, cultural displays, and decorations which were going to be available while we were there. The only downside to all of these extras was that there was no way we would be able to take them all in during our six days with the Mouse. 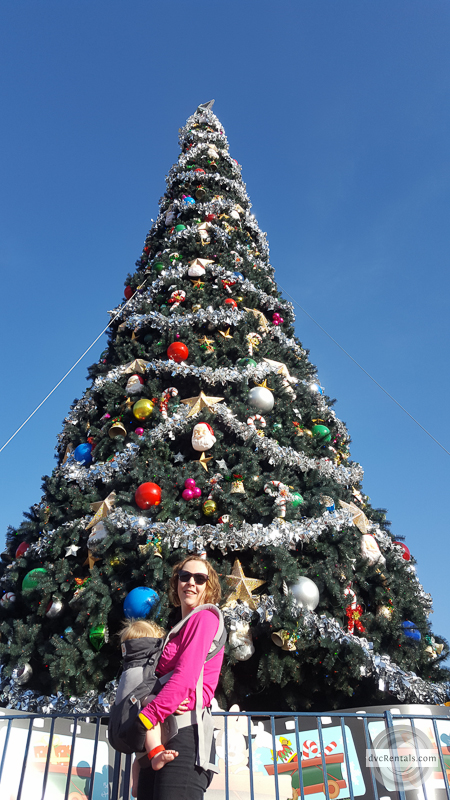 We spent the first day of our trip at Hollywood Studios. While Hollywood Boulevard was decked with garlands, overwhelmingly the theme was Star Wars as the park prepares to welcome the new land in the next couple of years. 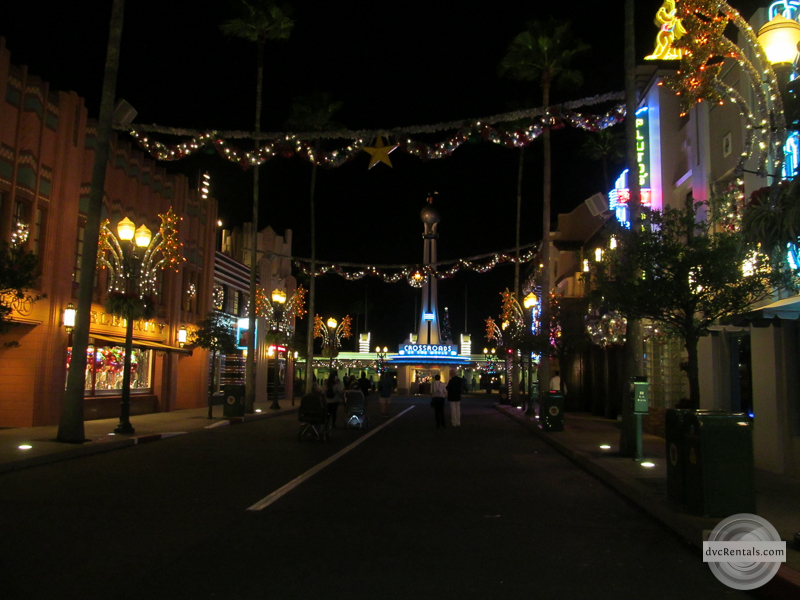 We did enjoy taking photos in front of the tree at the entrance to the park. The silver, tinsel garland lent a glamorous air to the decorations. 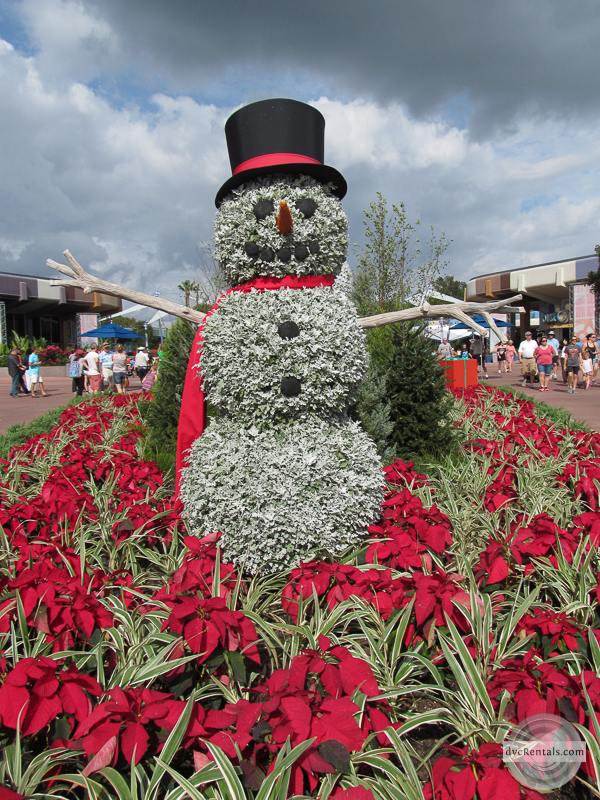 The next park we visited was Epcot, where, in addition to the decorations, there were storytellers at each of the pavilions who talked about their traditions and stories. Because we were traveling with an eleven month old who had been out late the night before, we were only able to catch the show in Norway which was engaging and included some funny audience participation. Although I should note that my son found eating the nearby foliage equally interesting as the performers.

One of the highlights of our trip was attending Mickey’s Very Merry Christmas Party. We arrived early to ensure that we would be able to ride some attractions in addition to sampling the festive snacks and watching the special shows that were being put on that evening. As a former cast member, Mike Wazowski “with one eye” will always hold a special place in my heart, so I was delighted to see him performing in “A Totally Tomorrowland Christmas”. I was so entranced by the show, laughing and dancing along, that it was only after arriving home that I realized that I hadn’t even captured one shot of my favorite green monster. For my family, watching Elsa freeze the castle and the special Wishes show was a highlight. My mother-in-law took at least ten shots of Cinderella’s home, I think she was trying to capture the magical warm feeling so she could relive it in her home during one of February’s many deep freezes. 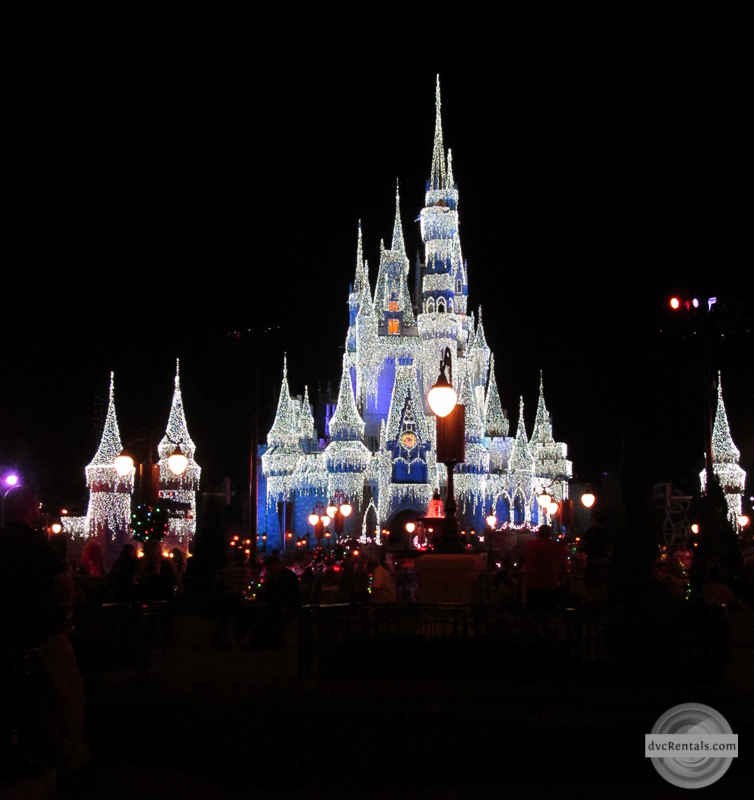 My family’s home is significantly closer to the Arctic Circle than it is to the equator; temperatures regularly plunge to -20 Fahrenheit or colder, so at first, seeing Christmas decorations without snow was a strange experience. This dichotomous feeling of combining warm weather and holiday cheer was captured perfectly on the Jungle Cruise’s overlay the “Jingle Cruise”. The story is that the skippers got homesick and decided to festoon the jungle with bows, presents and garlands. My personal favorite was the tarantula wearing a tiny Santa hat. The presents floating on the Nile River seemed as funny and out of place to all the guests as the carols playing while we sweated in shorts and t-shirts seemed to us. My family adored the Jingle Cruise, we laughed the entire ride.

Although all of the decorations at the parks were lovely, hands down, my favorite were those at the Animal Kingdom park; I adored them for their creativity and the way that they blended so seamlessly with the park’s theme. The tree in front of the gates was adorned with animals which made it unique. Within the park, the wreaths appeared to be made of reused materials. This shining example of innovation and upcycling made me smile.

Another seasonal highlight of our trip was the evening we spent at Disney Springs. We left our little boy with his grandparents and took off to explore the shopping district ourselves. Although the entire area was decked out in twinkly lights, the best part was the Christmas trees which were themed to different movies and characters. 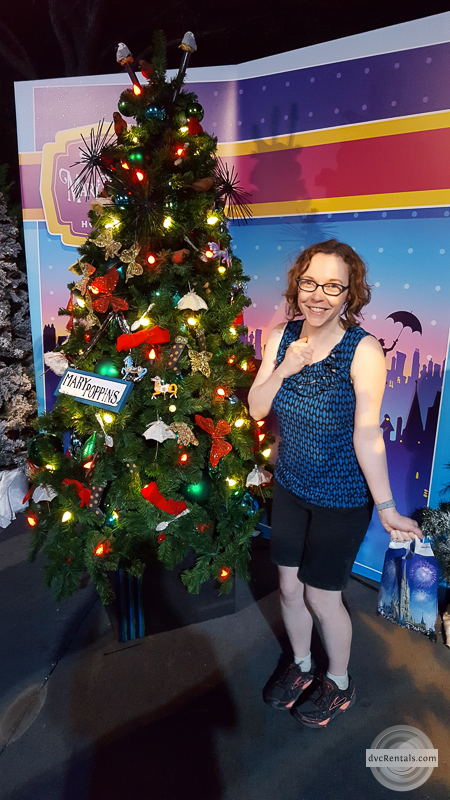 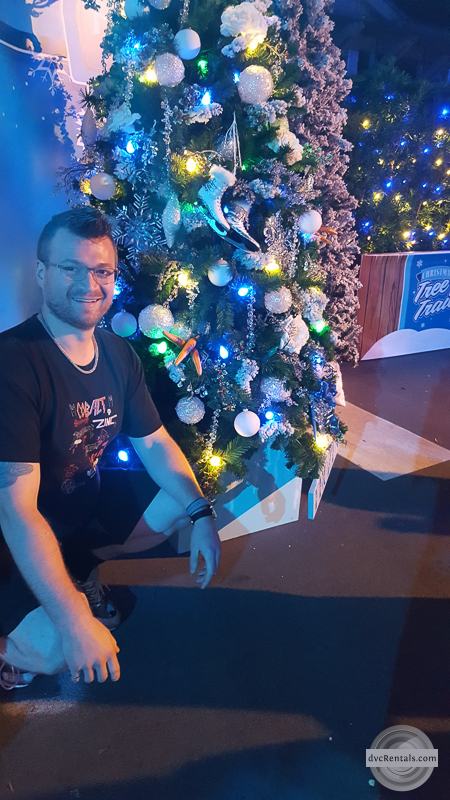 Even though my family hustled our buns from one place to another in an effort to take in all of the wonderful events and decorations put on during the holidays, we didn’t even come close to seeing it all. Most notably we missed visiting the Boardwalk to see the decorations of the three resorts there, not to mention taking in the Boardwalk itself during the holidays but we also didn’t make it to the Grand Floridian to pose with the life size gingerbread house in the lobby. That can only man one thing – we’ll have to go back next year! Or more likely when all members of our family can walk on their own – wearing a carrier for seven days straight was tiring!

When she isn’t dreaming about Disney or remembering the six months she spent as a Cast Member, Sarah writes a blog called The Great Unwashed which talks about funny things that have happened to her, like the time she unknowingly stained a wooden chest using her grandfather’s underpants.