Ahoy mateys, you don’t have to be a pirate to pretend to be one!  If you enjoy meeting pirate-related characters, drinking pirate punch, eating snacks, and watching some awesome fireworks, all while wearing your pirate headscarf, you will enjoy the Pirates & Pals Fireworks Dessert Voyage.  Starting out at Disney’s Contemporary Resort, it’s very family friendly and fun for all ages. 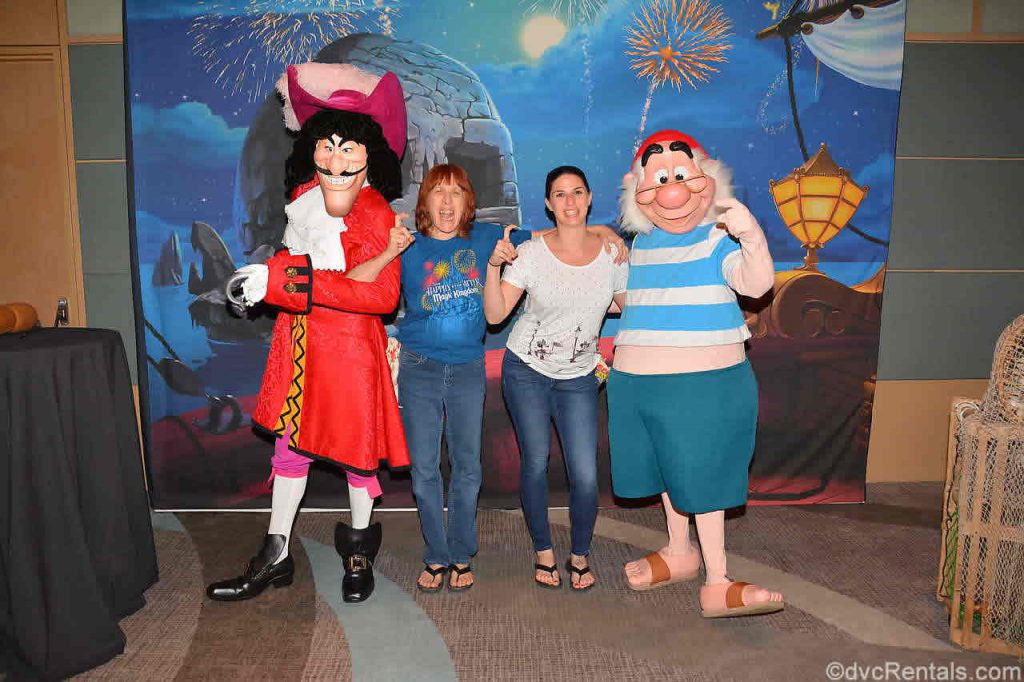 Parking was a breeze, because with your confirmation number for the event you are welcome to park at the Contemporary.  Precise locations in the resort can change, but when my daughter and I went on 4/12/19 we were directed to meet in the Conference area. Signs clearly pointed the way, and we found the check-in desk with no trouble. 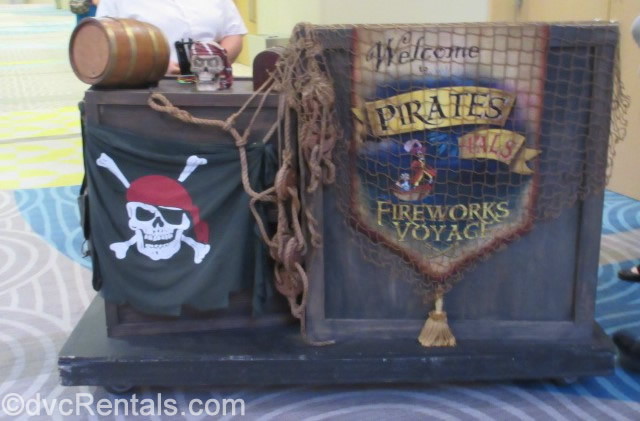 It helped that in addition to a sign, there were two very large pirate statues positioned just outside the check-in area. One is a skeleton and the other is a “real” person, both are dressed in very elaborate pirate outfits, and they both have one peg leg. We took advantage of the obvious photo op with the pirates, (as did every other family who arrived for the event). 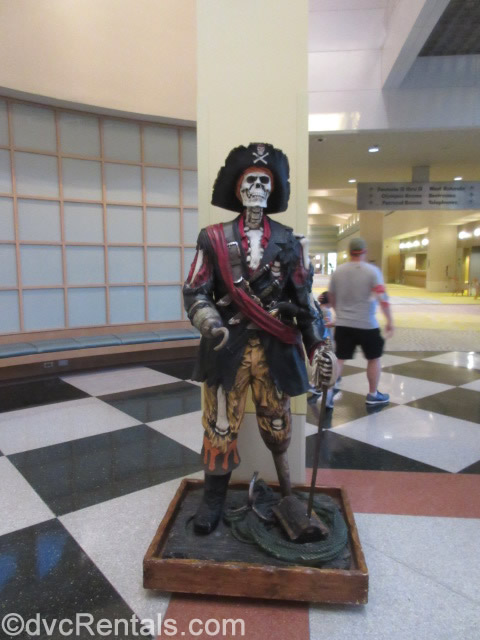 You are instructed to arrive 15 minutes prior to the time the fun is scheduled to start. Times can vary, the night we were attending the dessert portion, which is done first, was due to begin at 8.  We got there early, checked in with a very friendly Cast Member, received a “boarding pass” with the number row we were assigned for the cruise, and watched other guests as they arrived. We also received a cool Pirates bandanna. 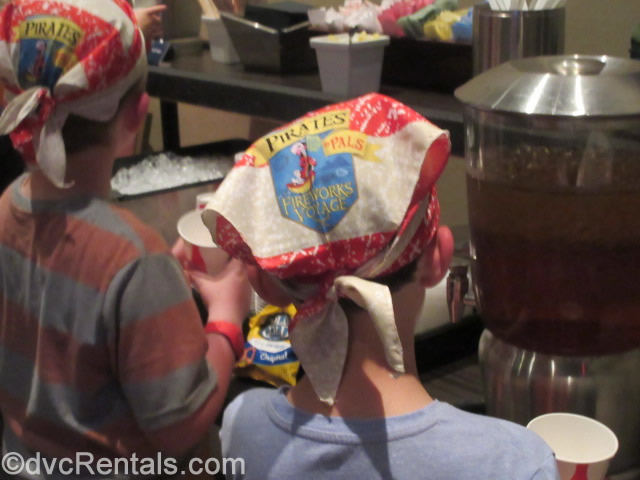 Although there were a number of grown-ups without children (including my daughter and I, she’s an adult), there were a lot of families with kids. If you are not one who likes a lot of little ones around, this event is probably not for you.  I found the children adorable and it actually added to the experience watching them have so much fun.  While we waited for the official start of the experience at 8PM, there was a table with coloring books, crayons and treasure maps for kids to play with. But I found most of them had more fun running up and down the long carpeted hallway in the convention center. 😊 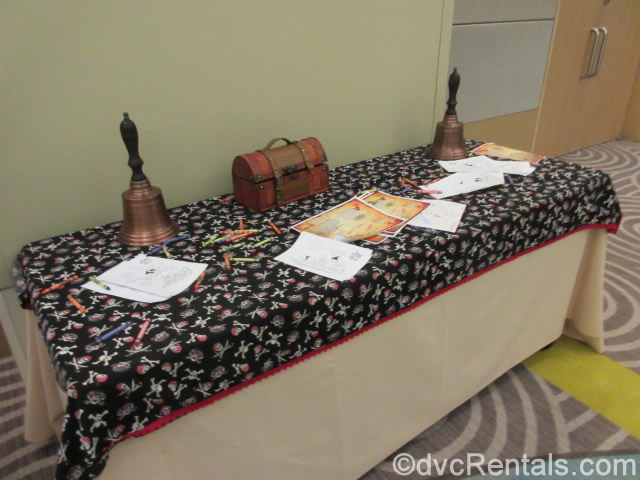 At exactly 8PM the doors flew open and there stood two pirates in full pirate regalia. 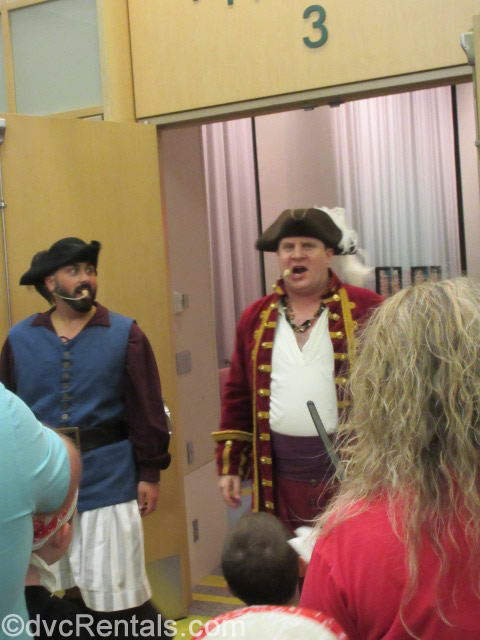 They were boisterous, friendly, and funny as they welcomed everyone.  We were directed to help ourselves to the food and beverages, and at the same time Captain Hook and his sidekick Smee arrived.  People lined up for pics (there was a Photopass photographer on hand, but you can take your own pictures as well), and autographs. 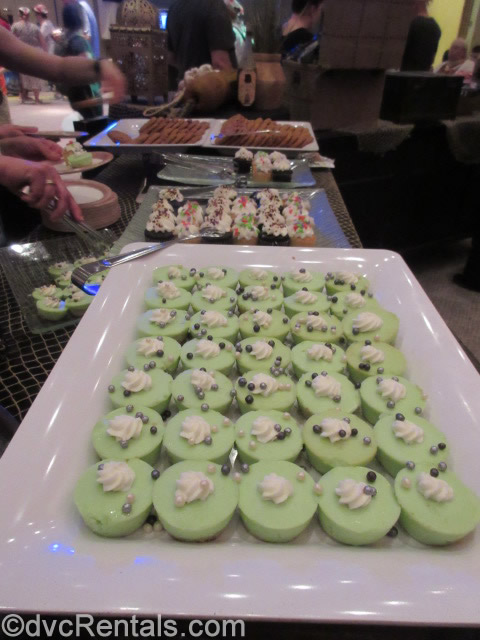 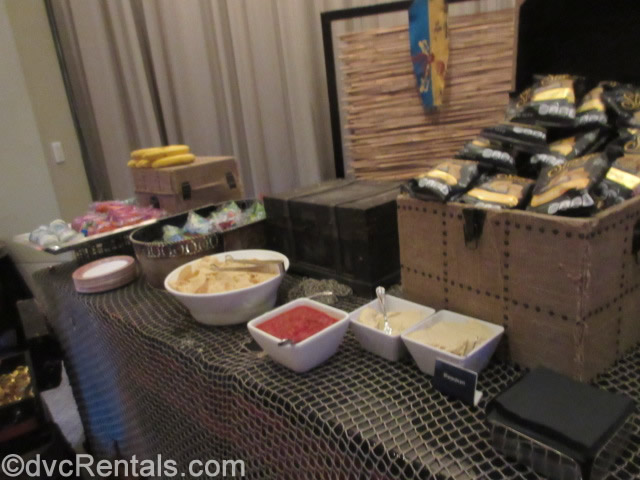 My daughter and I opted to do some munching and let the line for the characters get shorter.  The choices weren’t fancy, but they were plentiful and tasty. There were (literally) buckets full of chocolate coins; a freezer full of Mickey ice cream sandwiches and ice pops; vanilla and chocolate mini frosted sprinkled cupcakes; mini key lime cheesecakes; small bags of popcorn, pretzels and nachos; large chocolate chip cookies; bananas; yogurt; baby carrots; bags with apple slices.  There was a table with beverages as well, water, coffee, apple juice and “pirate punch”. 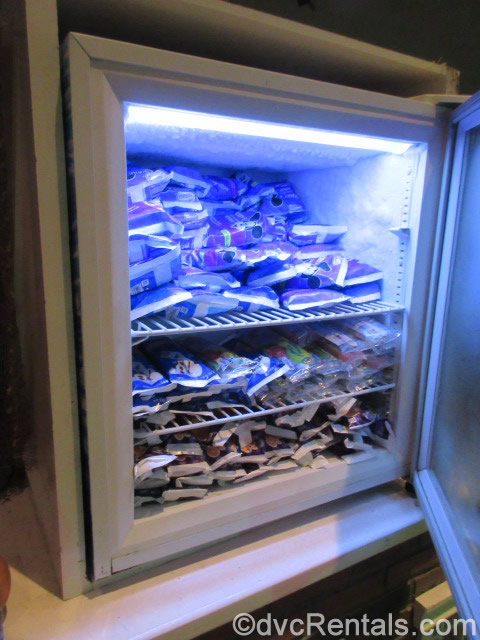 After we ate our snacks, my daughter and I stood on line to get our pictures taken with Hook and Smee.  They were very playful and fun to interact with; both did a great job of staying in character and making it fun for everyone, no matter what their age. The Photopass photographer takes a number of shots; ours did a great job.

The dessert/meet and greet lasted about 45 minutes. We were then split up into two groups (the boarding pass I mentioned earlier tells you which group your party is in).  There was a Smee Group and a Hook Group, and we were divided into two boats.  Hook and Smee do not come on the boat with you, but they do escort you to the boat. 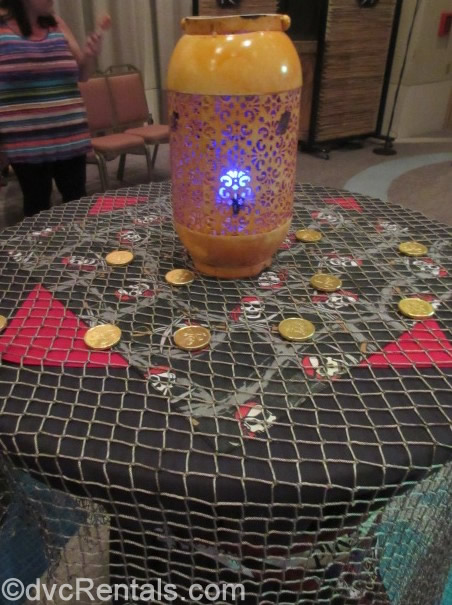 But first, the pirates that will be on the boat with you make sure they got everyone’s attention. We had to raise our hand and promise to keep hand, arms, and legs inside the boat at all times! Then one child was given a pirate flag (I am not sure how she was chosen) and, when ordered to “shove off” she leads both groups, along with Smee and Hook, to the boats.  Guests find the row they were assigned, Smee and Hook wave goodbye, and before we knew it we were sailing the Seven Seas Lagoon. 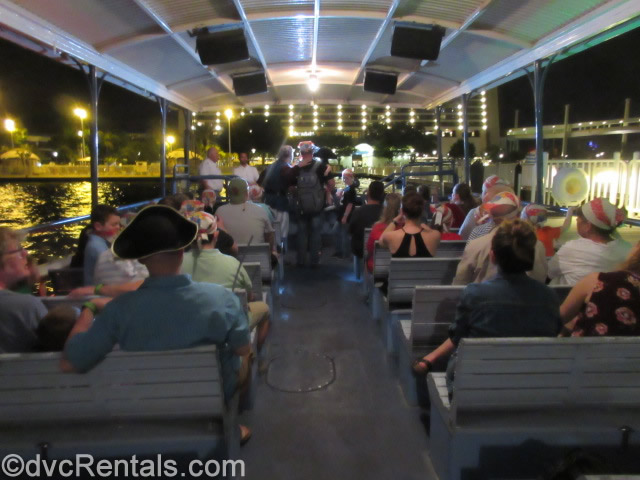 The night we attended the boat was not full, but it was far from empty. It is the luck of the draw where you are assigned to sit, the left side of the boat definitely had the best view once the fireworks started due to the way they position the boat.  The right side can see just fine, don’t get me wrong, but the left does have a better angle. As we sailed Patch the Pirate told jokes and did riddles.  Our Patch was wonderful; he was so energetic and totally into the role.  He went around the boat, asked where everyone was from and did some cute ad-libbing with guests.  Patch also recognized special occasions such as birthdays and anniversaries.  As an aside, I have a hearing loss, but Patch wore a microphone and there were multiple speakers on the boat, so I heard everything. Additionally, there are spots for wheelchairs on the boat.

It seemed to be 20-30 minutes or so before the fireworks started. 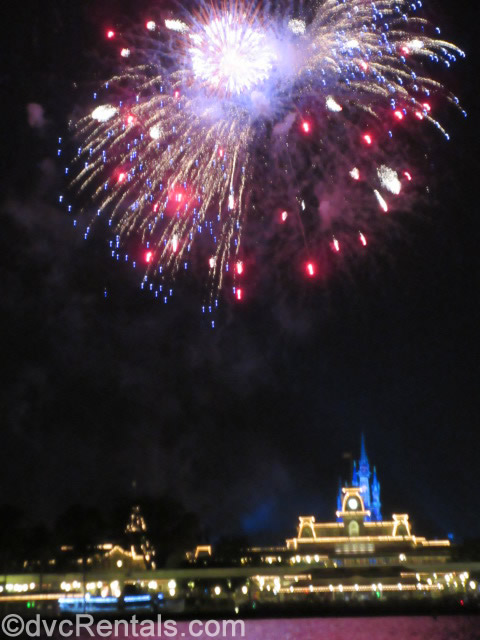 Patch did a great job entertaining everyone, but I must insert my one disappointment.  I did this event once before, and that time we watched the Electrical Water Pageant before we saw the fireworks. The current description mentions seeing the water pageant if the weather is good and time permits. I could clearly see the pageant across the way in the lagoon, the weather was fine, and we left in what seemed to me to be plenty of time to view it.  But for some reason we did not sail by, and so I could only see a little of it from a distance.  The Electrical Water Pageant is a favorite of mine, and my daughter’s from way back when she was small. It was not “promised” as part of the event, but still, I was hoping to see the show.  Of course, I didn’t let it spoil our time, as everything else was just great. OK, rant over, back to our regularly scheduled blog.

The music and narration of the “Happily Ever After” fireworks show at the Magic Kingdom are piped into the boat, and the view from the boat is excellent. You can’t see the projections on the castle very well, but you get a wonderful perspective of the fireworks, as they “park” the boats at a great vantage point.  Watching them explode over and around the castle was fantastic. The fireworks last just under 20 minutes, and many displays are breathtaking. 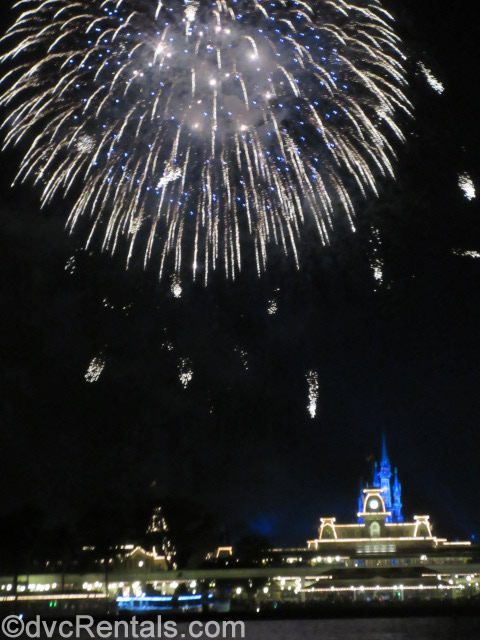 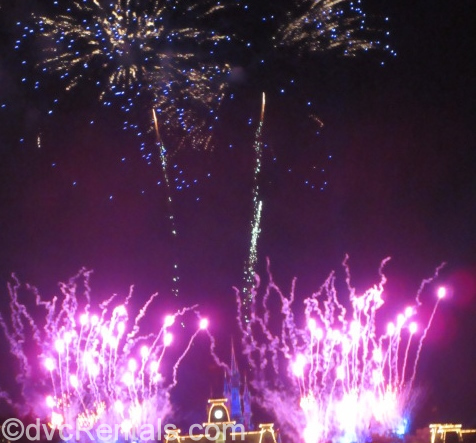 On the way back to the Contemporary Patch played trivia games with the kids.  The youngsters were asked to pick a Disney movie, and when Patch asked the trivia question, they had to raise their hand if they knew the answer.  When they got the answer, they got a prize (any child who did not get a prize was instructed to see Patch on the way out, they were given prizes as well).  As we approached the dock, we could see one last surprise was in store—Peter Pan was there to meet us! He was funny and playful and was more than happy to interact and pose with guests and to sign autograph books. There was a Photopass photographer at this spot as well.  After we said goodbye to Peter Pan the event was over. All in all, it lasted about two hours. 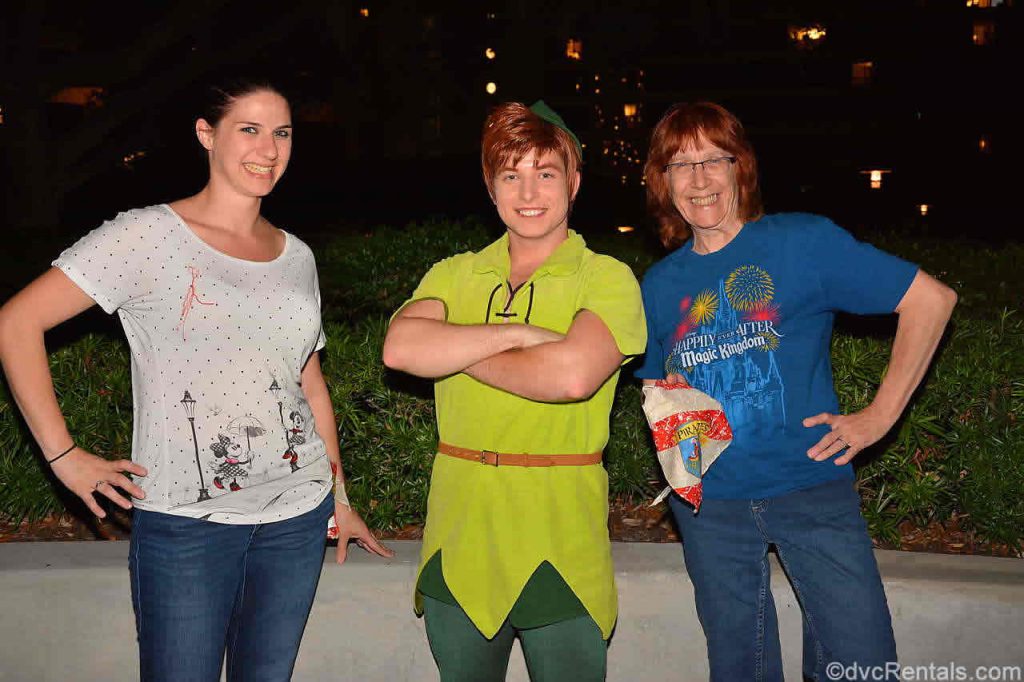 The “fine print”: The cost is $75 for adults, $45 for kids 3-9 and it’s free for Mouseketeers who are 2 and under. Although the boat was not full the night I went, it can fill up, so reservations are recommended. You can book the Pirates and Pals Fireworks Dessert Voyage 90 days in advance via My Disney Experience or by calling 407-939-7529. A credit card is necessary to hold your place and will be charged the entire cost of the tour if you do not cancel 48 hours or more prior.  If the boats are not full walk-ins are accepted up to one hour before the event begins.  If the weather is bad, the experience may be canceled. Remember it can be chilly on the water, especially certain times of the year. I suggest you bring a sweater if you have any doubts. And finally one tip: If you do the cruise on a night that Mickey’s Not So Scary Halloween Party or Mickey’s Very Merry Christmas party is going on, you will see the special fireworks displayed for those events as an extra bonus! 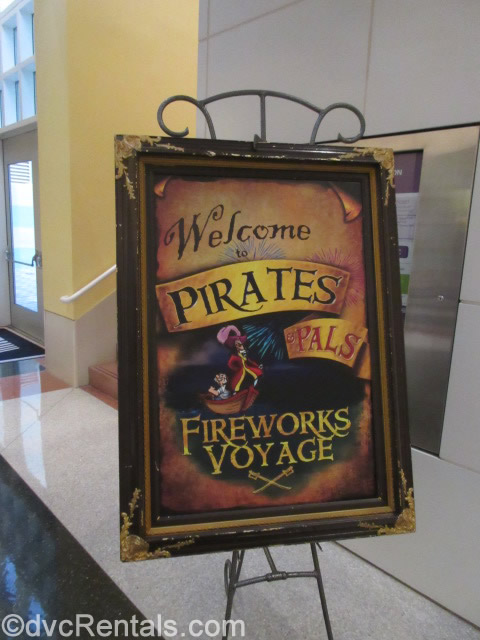