If you have visited Walt Disney World since May 16 in 1991, and you also like the Muppets, chances are excellent that you have seen Muppet*Vision 3D at Disney’s Hollywood Studios. 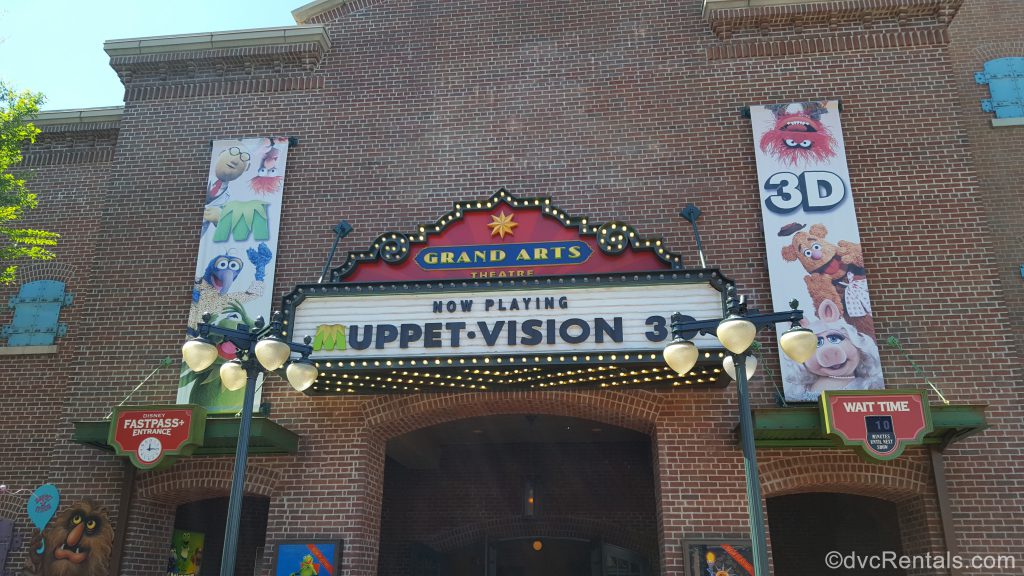 Even those who may not be huge fans of the Muppets more than likely enjoy this fun presentation. Originally conceived and directed by Muppet visionary Jim Henson, sadly he did not live to see the attraction open, as he passed away suddenly in 1990.  Let’s discuss some of the interesting facts/trivia related to Muppet*Vision 3D. 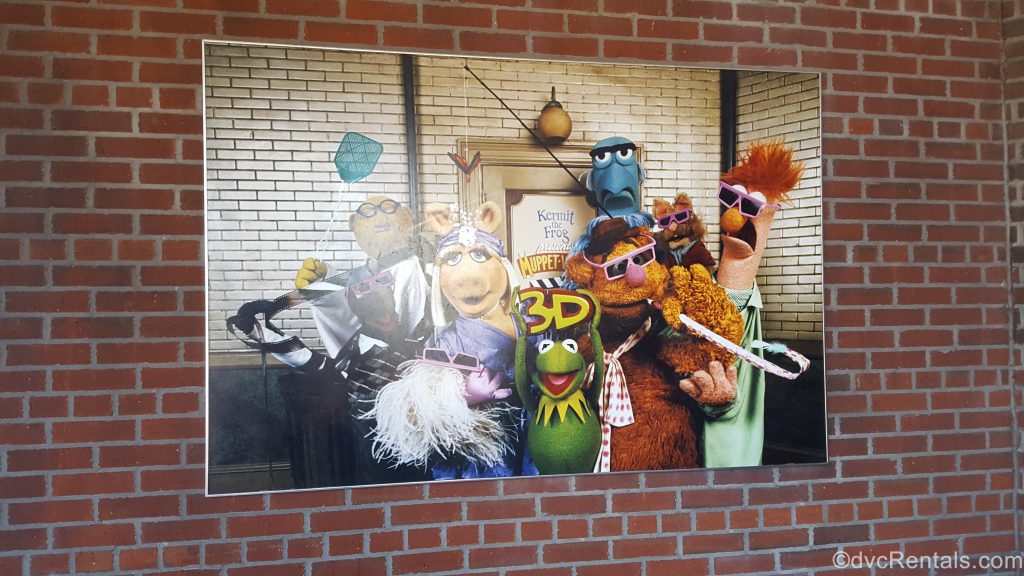 Before you even enter the building where the attraction is housed, take a look at the walls of the building, and check out the courtyard in the front.  You’ll see the Muppet Sweetums with one of those paddles with a ball attached to the wall, up on the front entrance on the left side.  Look to your right and up and you’ll see a clock on the same wall. Take a look at the hands of the clock; you will notice Great Gonzo is hanging onto one of them. 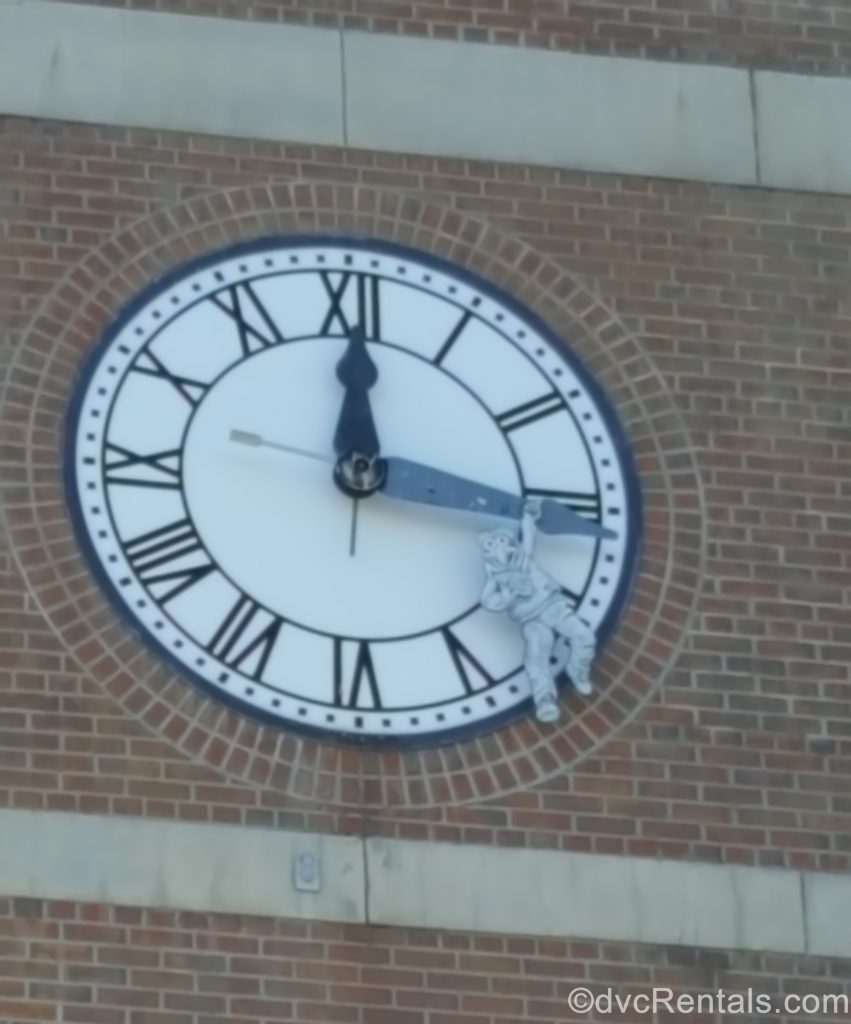 There are also many “punny” signs and posters on the building entrance, as well as on the way out after you watch the show. In the courtyard you’ll find a fountain “starring” Miss Piggy, along with Fozzie Bear, Rizzo, and other Muppets frolicking in or near the water.

Once you enter the building, look to your right and you will see what looks like a ticket window with a sign that says “Back in 5 minutes, Key under the mat”. Be sure to actually lift up the mat and take a look—there embedded in the ground is a key!  This is fun for everyone, but if there are kids in your group, I suggest you let them take a look first; they will get a real kick out of it.

As you go down the hall towards the pre-show area, check out the doors/signs/posters on both walls along the way.  Each one has a unique silly saying or words displayed that will make you smile. There is a lot to see in this little hallway, so if you’re not in a rush take your time so you don’t miss any of the fun. 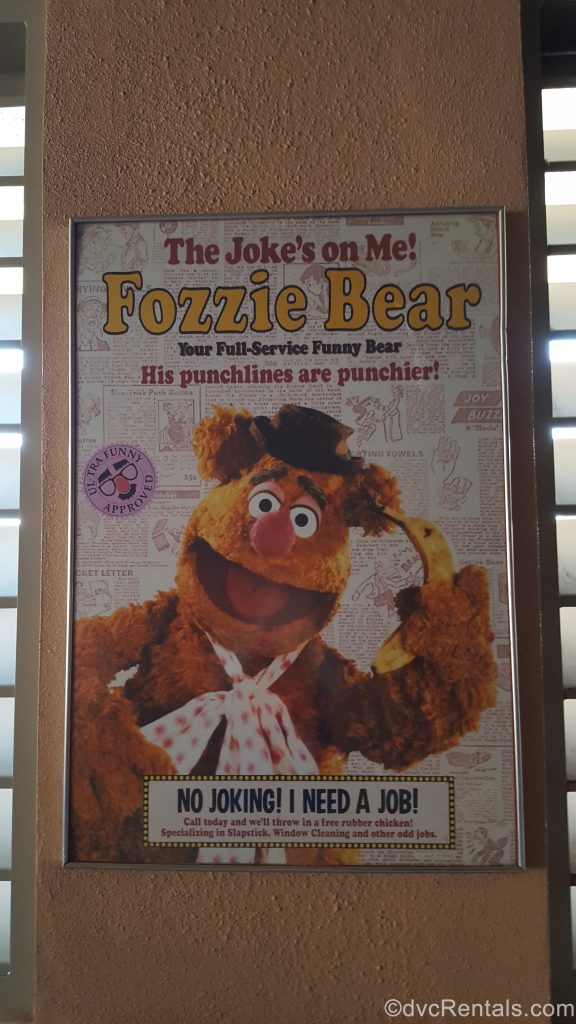 Next you will enter the pre-show room; IMHO the best pre-show at Walt Disney World, as there is so much to see! The entire room is full of Muppet memorabilia, jokes, photos, and displays.  For example, you will see a net hanging overhead when you first enter the room. The net is filled with plastic bars of Jello. According to Cast Members, this is supposed to be “A net full of Jello”, which is a shout out pun for the beloved Mouseketeer Annette Funicello! 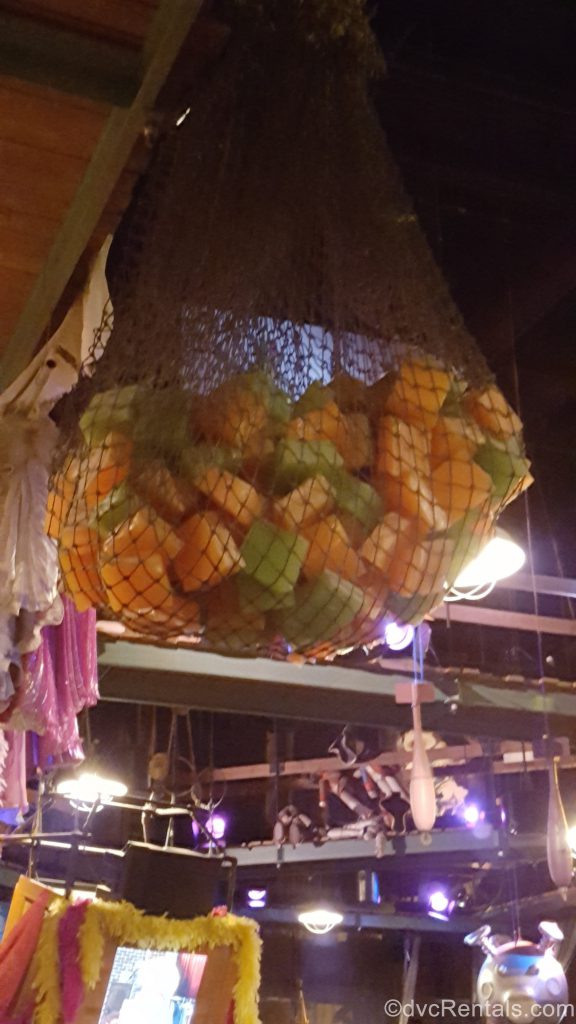 If you continue to look around, you’ll also see Miss Piggy’s wardrobe suitcases; a Makeup table that belongs to Piggy; suitcases belonging to the Muppet Band the Electric Mayhem; a Box that stores Rowlf the dog’s Piano and food; a box of goodies for Kermit from “The Total Swamp Store”; a box with props for Gonzo that says it includes, among other things, “Mold, Fungus and Helmets”. I could go on for a long time. There are so many props and fun things to see that it would take more room than I have in this blog to mention them all.  Plus it will be even more fun for you to discover things yourself! 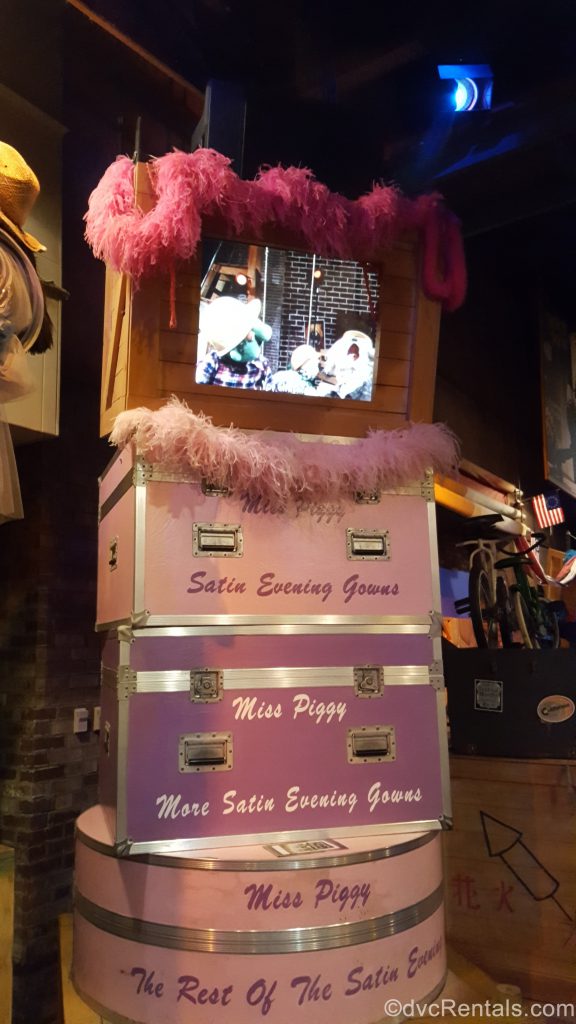 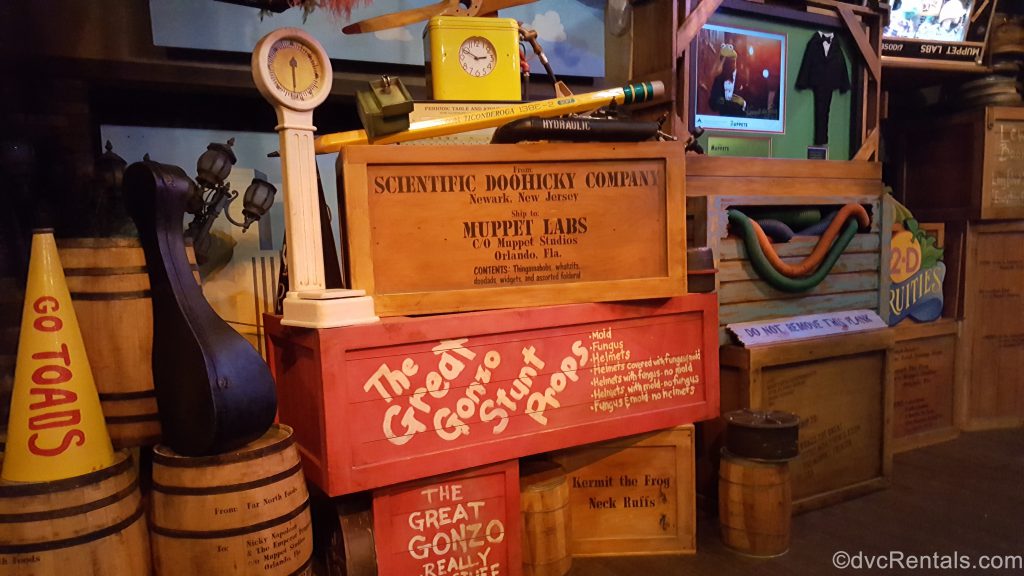 However, I do want to mention two items that I think are very awesome, especially if you are a big fan of the Muppets. If you go towards the front of the preshow area and look up and to your left you will see a huge poster of Jim Henson. Except it’s not a photo of Jim himself, it’s a photo of Jim’s Muppet likeness! During Jim’s lifetime this Muppet appeared in a few sketches, often together with a Muppet likeness of his partner, Frank Oz (for those who may not know, Frank played Bert to Jim’s Ernie and voiced a number of other beloved Muppet Characters. Oz also created Yoda for Star Wars! In the 3D movie Muppet*Vision Frank voices Miss Piggy, Fozzie Bear and Sam Eagle.  Jim (naturally) does Kermit’s voice, as well as that of Waldorf and the Swedish Chef). 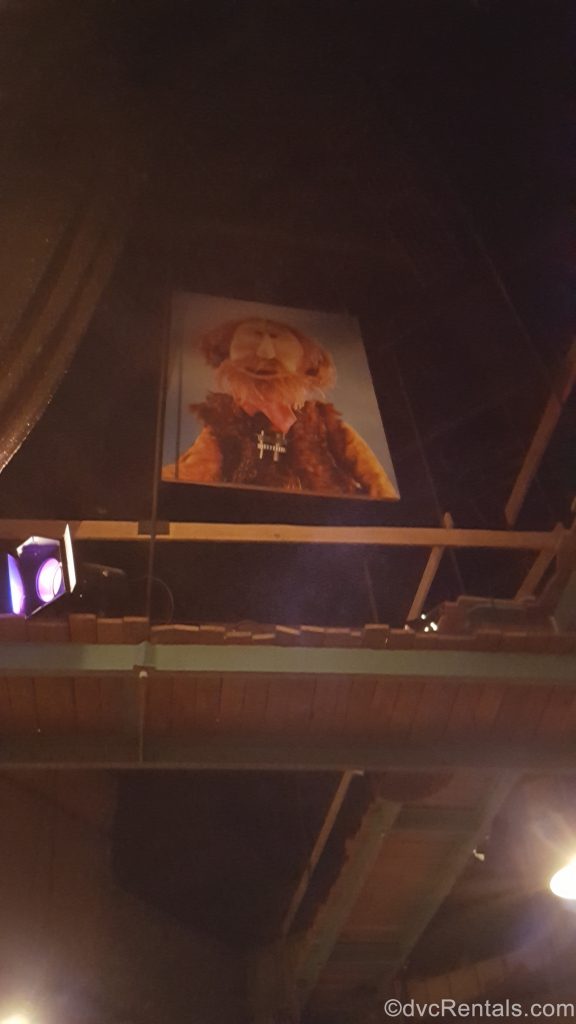 The other reference I want to note is more obscure. Towards the front on the right, you will see a box that says “Lew Zealand’s Boomerang Fish”.  Lew Grade was the name of the distributor of the TV program “The Muppet Show”.  Jim Henson tried to get American distributors for the show, but at that time Jim was seen as a “kids” personality (due to his most famed work until then being Sesame Street Muppets), and no one in the US would take a chance on financing a show that was for the whole family. Lew Grade was from England, he met with Jim and he believed in him and his talent. The two made a deal on nothing more than a handshake. I don’t think I need to tell you how successful “The Muppet Show” became; I bet all those who turned Jim down regretted that decision! 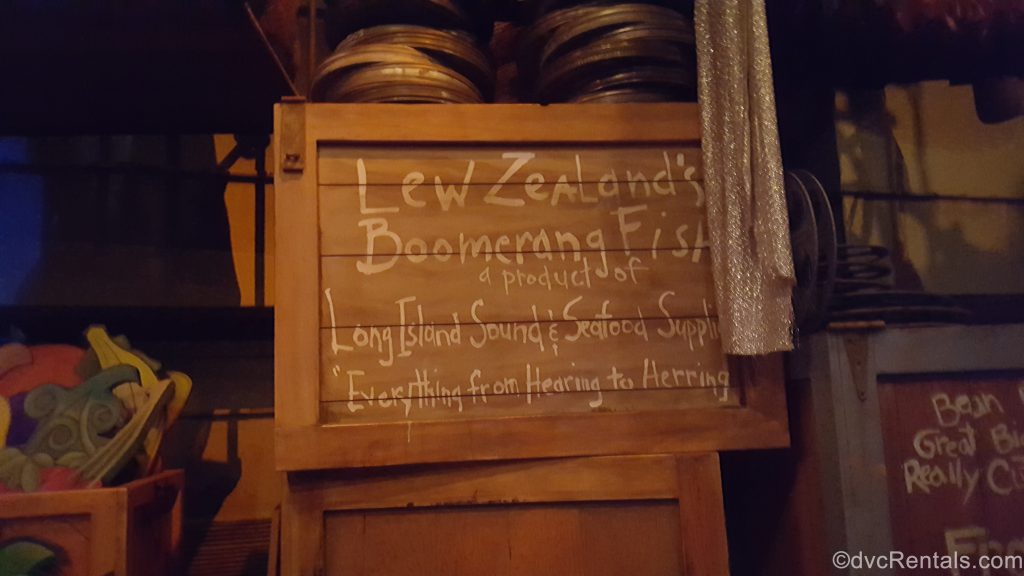 There is also a pre-show movie that is hysterically funny.  For those with hearing loss the show is captioned.  It plays out on a series of TV screens that are hung across the room, and, the way it is filmed, it often appears the Muppets are moving from one screen to the next. One of my favorite parts is when a “surprise” announcement is made saying that Mickey Mouse himself is about to appear.  Then we see Muppet Rizzo the Rat appear, dressed in Mickey’s tux and tail outfit and wearing a big set of Mickey ears. That always gets a big laugh from guests.

After the preshow, you head into the main theater and put on 3D glasses. The theater is accessible for guests in wheelchairs, and there is reflective captioning available for those with hearing loss (ask a Cast Member before you are seated so they can set it up for you). The movie has a number of scenes, is a great use of 3D effects, is a lot of fun, and is very much in the spirit of wacky Muppet humor (remember, Jim Henson wrote it!).  There are two characters in the movie who are not seen in many other Muppet Productions. They are Waldo, the “Spirit of 3D”, and a cute character called Bean Bunny, who both play significant parts.  The two of these characters were planned to be used more frequently, but once Jim Henson passed away, the characters were pretty much shelved. So if you have ever wondered why two barely known characters have such big roles in Muppet*Vision 3D, that’s the reason. 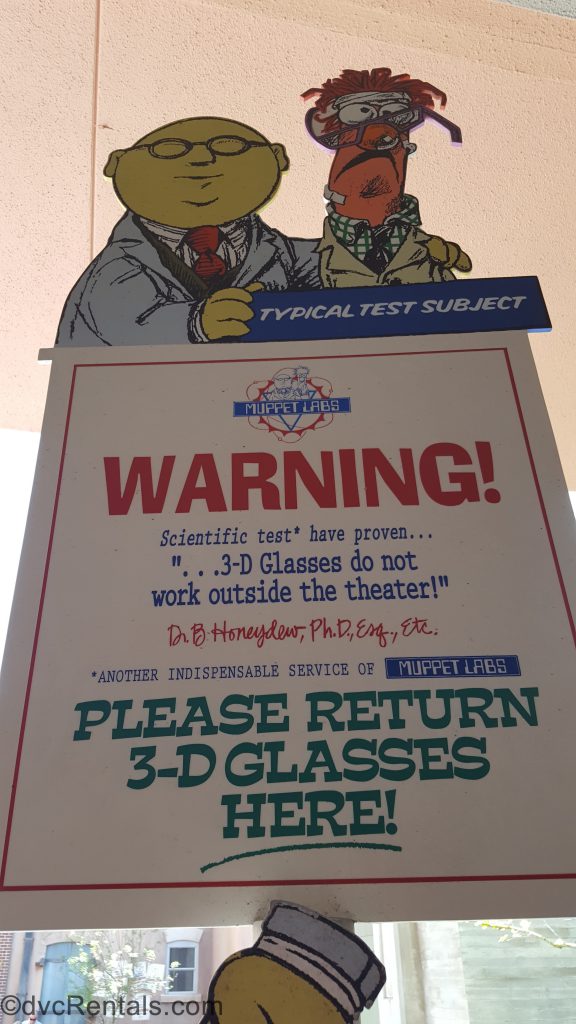 In addition to the 3D movie, other sights and sounds are part of the show.  Among other things, you will be sprayed with a mist of water; see bubbles come down from the ceiling; fireworks appear on the ceiling; a cannon seems to blow a hole through the building; there is an orchestra that consists of penguins (you can see them best if you are seated towards the front of the theater); and there is a funny musical number. 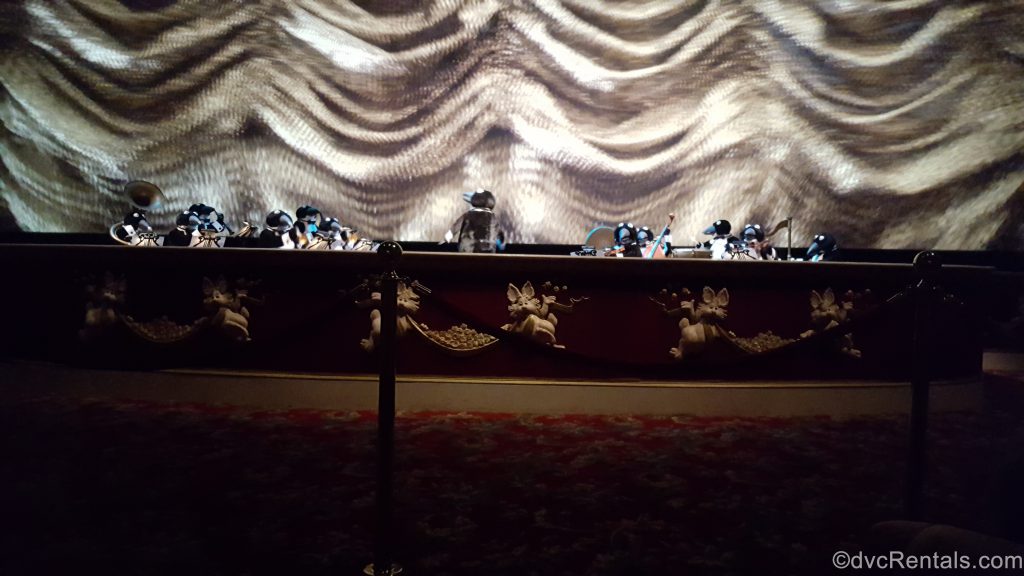 And what would a Muppet production be without those cranky Muppets Statler and Waldorf making snide remarks from their theater box? Yes, the two curmudgeons are definitely included. 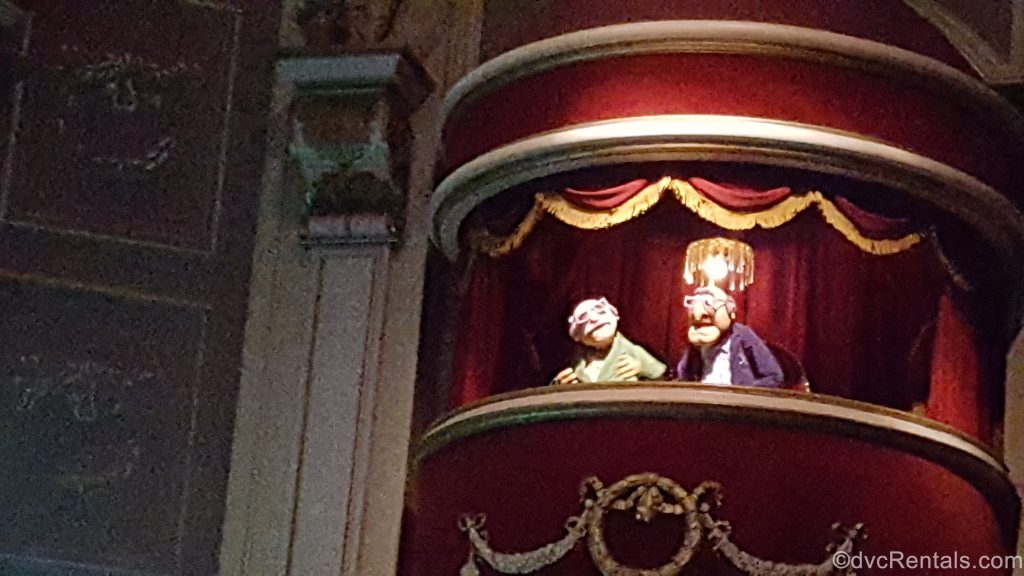 Again, there is too much to describe here, but I advise you to really look at the movie as it’s playing, as it is easy to miss things.  For example, during one scene Kermit is talking to us, but in the background chickens walk by, as does the Muppet Scooter riding a bike. I must have seen the movie at least ten times before I realized there are goldfish swimming in glass beakers in a scene in a laboratory run by Muppets Dr. Bunsen Honeydew and his sidekick, Beaker (meep meep!).

Don’t forget to look around the theater itself as you enter or exit when the lights are turned on. There are multiple Muppet statues, many of which are easy to miss. There are more “punny” items to see as well. For example, on the rear wall, you will see a “Yell and Howell” movie projector. For those too young to remember, Bell and Howell was a very famous company that sold movie cameras back in the day. 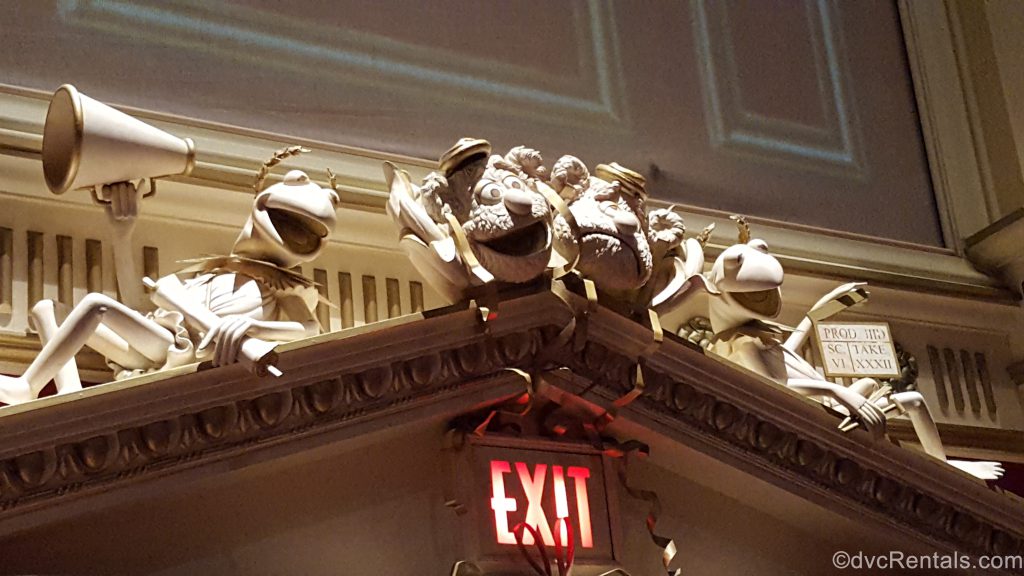 I think this attraction is one of the most creative at Walt Disney World, and with the preshow being so awesome it’s like two shows in one. Sadly, more Muppet related attractions were going to be added to what was then called Disney MGM studios, but due to the loss of Jim Henson this never came to fruition.  For example, The Great Muppet Ride, a parody of the park’s now-defunct Great Movie Ride, was in the plans. Guests were to ride through a number of movie parodies, including Peter Pan and Frankenstein. I have often wondered how different the park would have been if Jim hadn’t died so young and unexpectedly.

Like much of Walt Disney World, theming, hidden surprises and attention to detail abound in Muppet*Vision 3D.  I have literally only scratched the surface in this blog. Be sure to look up, look down and look all around you in both the preshow and the main theater.  I can almost promise you will spot something new each time you go if you look carefully enough. 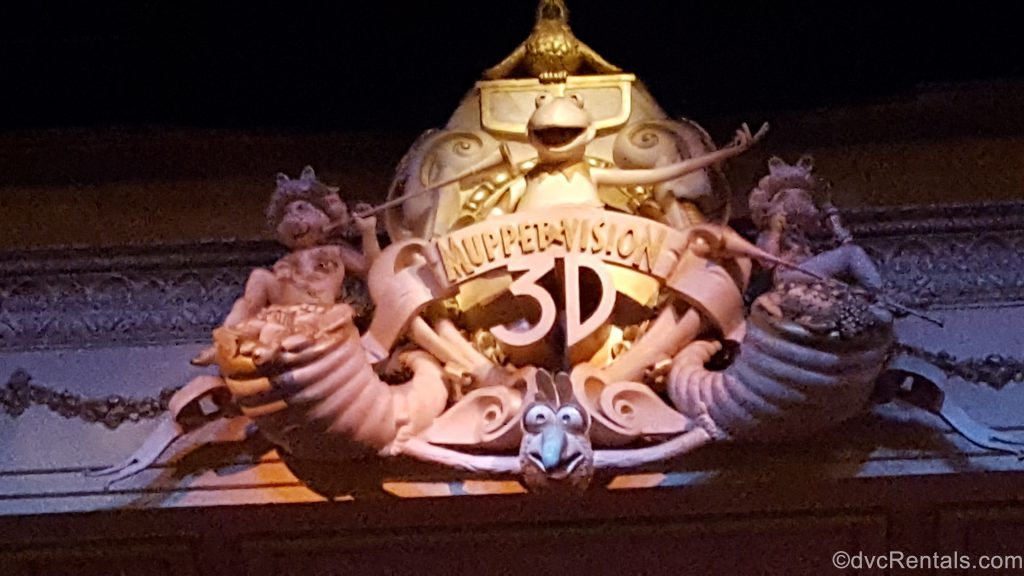