Even many of the most seasoned Walt Disney World veterans are not aware that the Main Mouse has an official birthday. 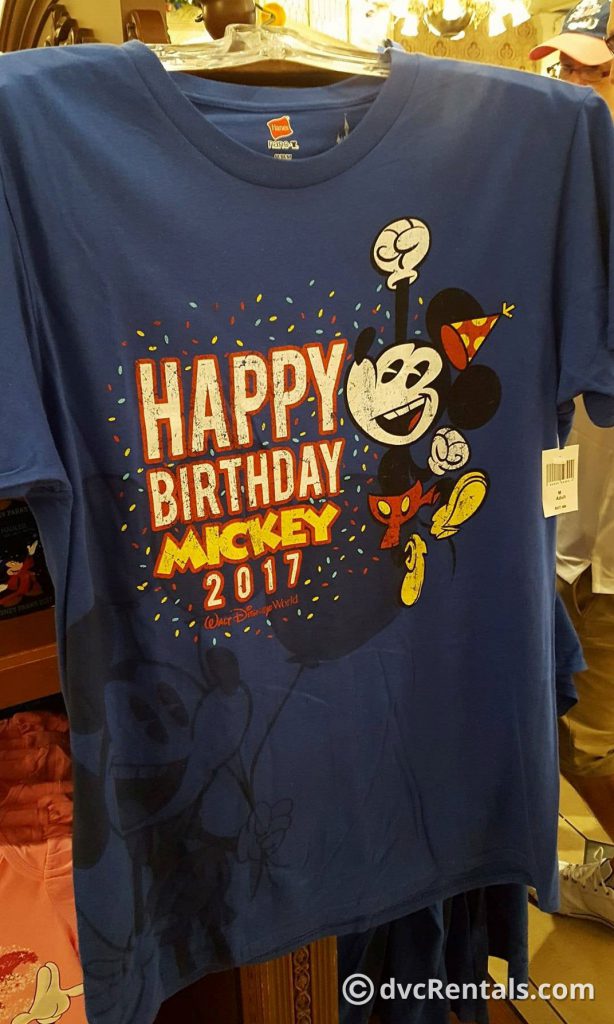 Steamboat Willie, Mickey’s first short feature, opened on November 18, 1928, astounding the world with the first cartoon that had synchronized sound. For those who may not know, Steamboat Willie was a black and white short cartoon starring Mickey (voiced by Walt Disney himself!), Minnie and an assortment of other characters and barnyard animals. It was a rip roaring success, and once they “met” him, the world seemingly couldn’t get enough of our beloved Mickey.  Walt followed up with many more short cartoons (many, but not all starring Mickey), leading up to the first full length animated feature film, Snow White. Snow White was so successful it allowed Walt to open up a new, bigger animation studio.  Of course, many other successful animated feature films followed Snow White. Ultimately, if there was no Mickey there might not have been a Disneyland or a Walt Disney World.  As Walt said, “It all started with a Mouse”, and that mouse was “born” on November 18, 1928. 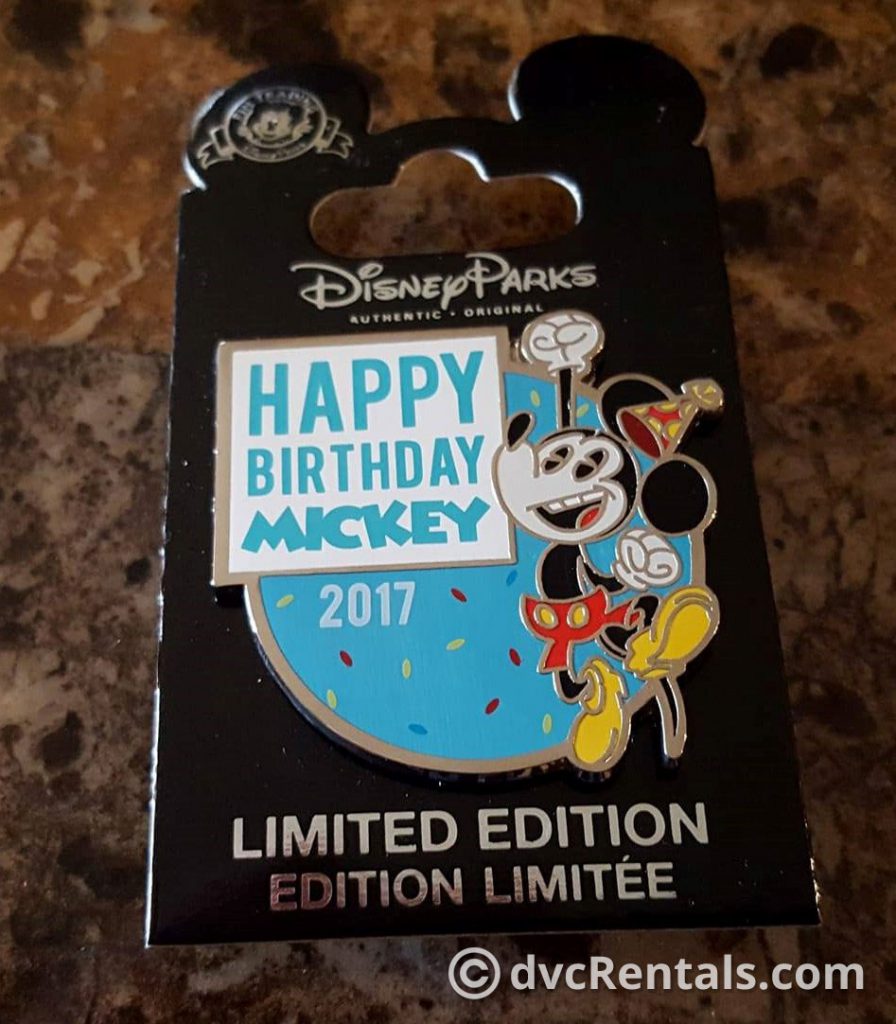 In the past Walt Disney World rarely made a fuss about Mickey’s birthday.  On his 75th birthday a number of Mickey statues were placed in front of the Magic Kingdom. Each one started out white and was custom decorated by people in some way connected to Disney. For example, Ellen DeGeneres had a statue featuring Dory, who Ellen voiced in Finding Nemo (and years later, Finding Dory).  But other than that, no mention was made of Mickey’s birthday at all.  Coincidentally I happen to be born on November 18 as well (but not in 1928! LOL).  Whenever I would mention my sharing a birthday with Mickey to anyone, even folks I knew loved Disney, they would look at me blankly until I explained yes, Mickey DOES have an official birthday, (and I would tell them why that date was chosen).

I have been to the Magic Kingdom many times on my birthday, but it was a rare Cast Member who would see my birthday button and say “Do you know today is Mickey’s birthday as well?”.  And when I say rare, I mean it happened precisely twice! It just wasn’t common knowledge. Even when they had the statues I mentioned above, they were originally placed on Mickey’s birthday, but they remained for months, and the connection to the birthday was basically lost. But this year that changed, and I hope it becomes a tradition to celebrate Mickey’s Birthday every year, if it wasn’t for him there might not be a Disneyland or a Disney World at all. 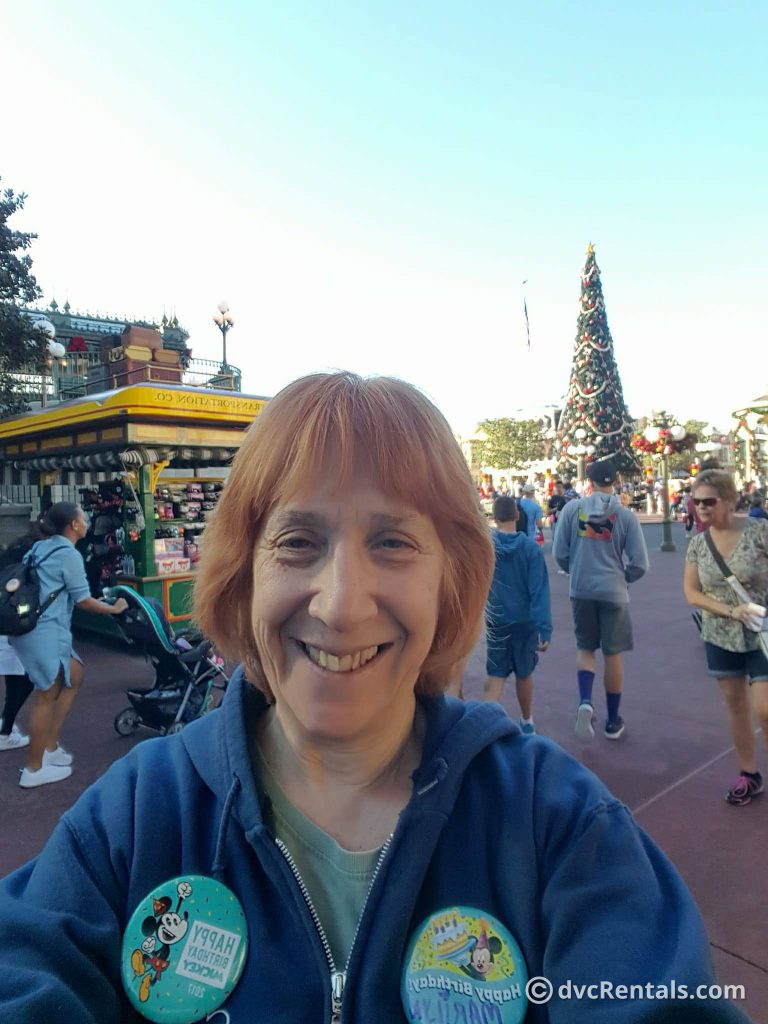 There were a number of events and special merchandise for sale to celebrate Mickey’s birthday this year. As you entered the Magic Kingdom there were Cast Members stationed at the entrance to hand out free Happy Birthday Mickey buttons.  Every single Cast Member I saw that day had one on. 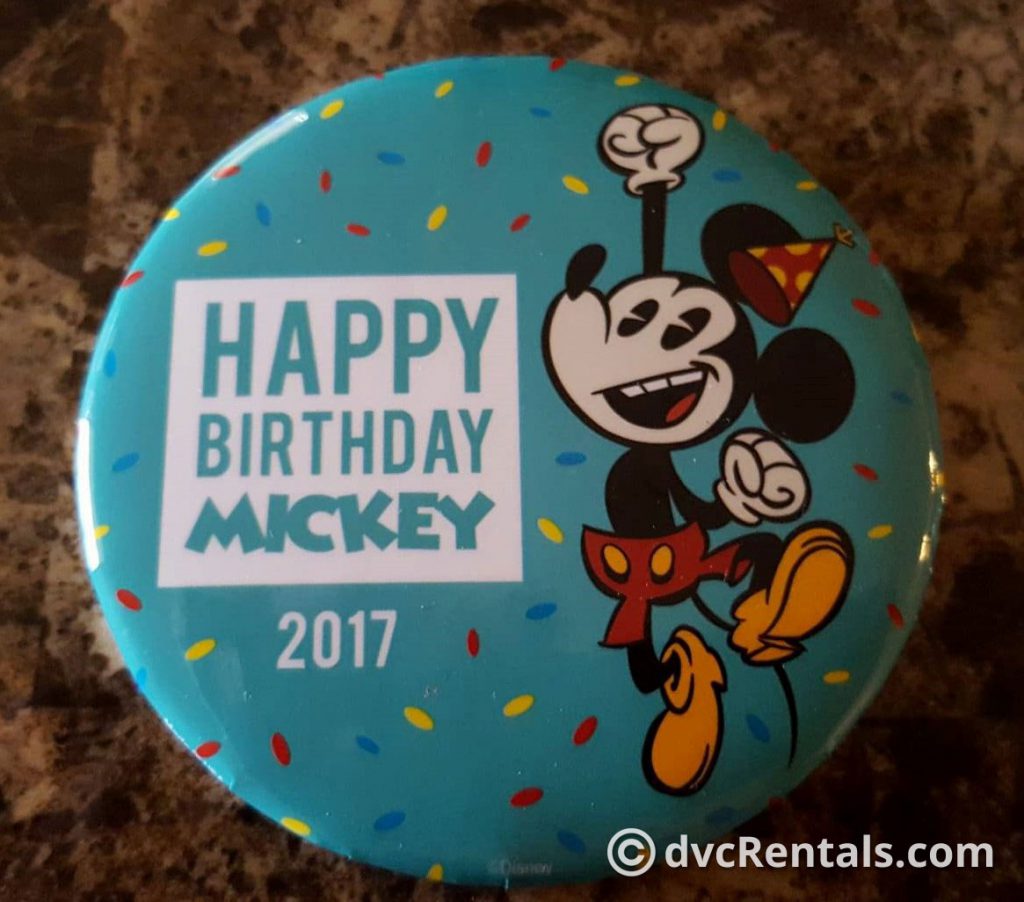 Unfortunately, I didn’t make rope drop, but I was told there a was a special Happy Birthday Welcome as they let guests into the park.  Luckily I did get there just after rope drop, because it got VERY crowded VERY fast. Besides being Mickey’s birthday, it was a Saturday, and additionally it was Dapper Day. Dapper Day is not a Disney sanctioned event, a private group organizes it. Guests dress up in fancy clothing, usually from the 30’s to the 50’s. It’s all very elegant.  But Saturday, Birthday Bash and Dapper Day added up to one crowded Magic Kingdom! I left at 11:15 AM and it was really packed. Friends I know who went later in the day actually turned around and left due to the crowds!

But before I left I made sure to take pictures of all the things related to Mickey’s Birthday Celebration.  I had read about it ahead of time, so I knew what to look for.  My first stop was the Dapper Dans on Main Street USA.  They noticed my Birthday button and asked if it was actually my birthday. When I replied that it was they sang Happy Birthday to both Mickey and me! That was very cool. 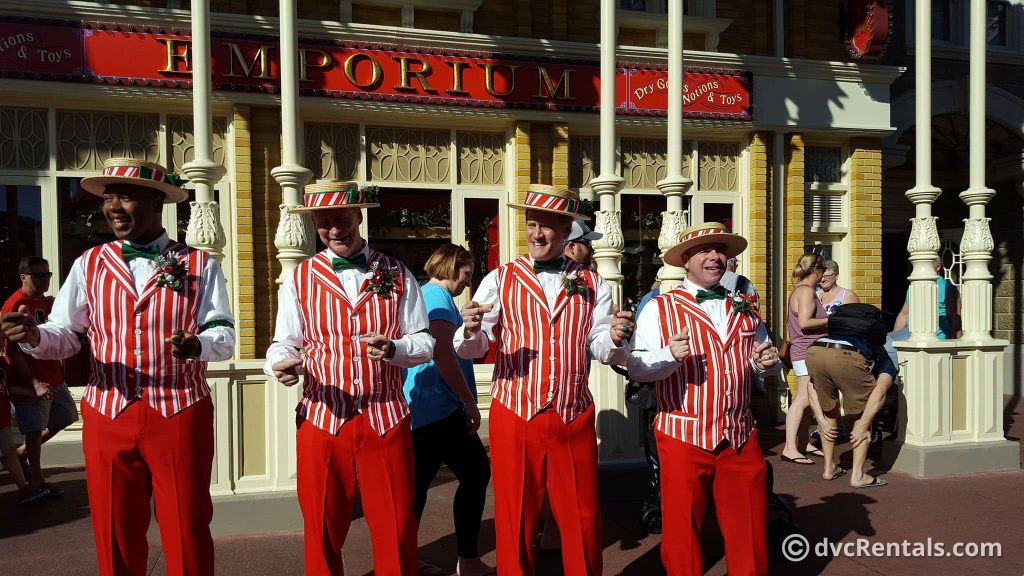 Next I went into the Main Street Emporium, where they were selling merchandise themed for the day.  There were special Mouse Ears, T-shirts (for both adults and kids), and trading pins.  The items were going like hotcakes, and Cast Members came out to replenish the supply while I was there. 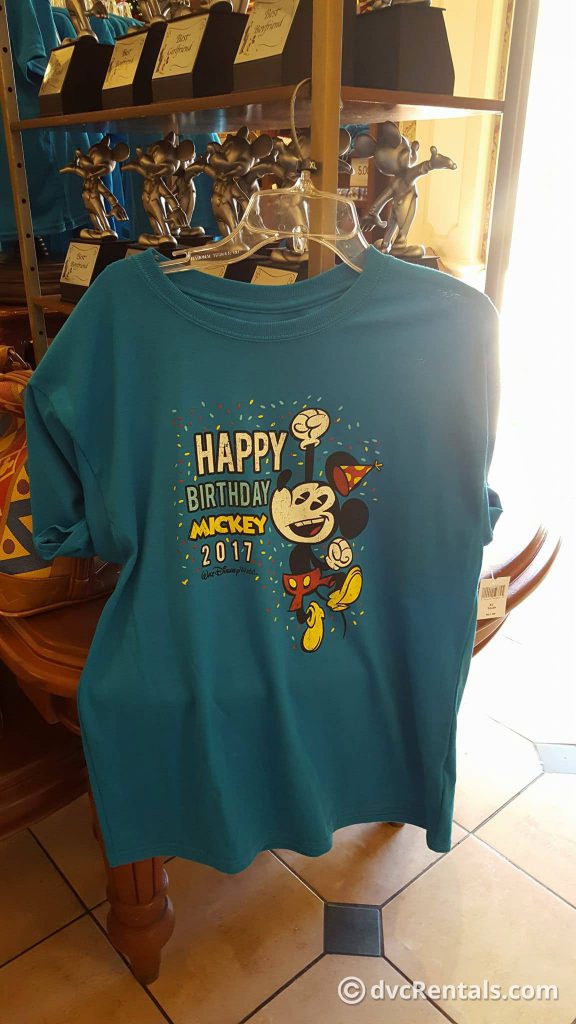 Further up Main Street, at the Main Street Bakery, a special Mickey treat could be found. It was too early in the day for me to eat sweets, and it would not have travelled well, but I did snap a picture.  It was a mini cheesecake with an edible Steamboat Willie inserted into the center.  As Mickey would say “Oh boy!”  Not only did the Cast Members rave about how good it tasted, the Steamboat Willie addition made it super special to behold. 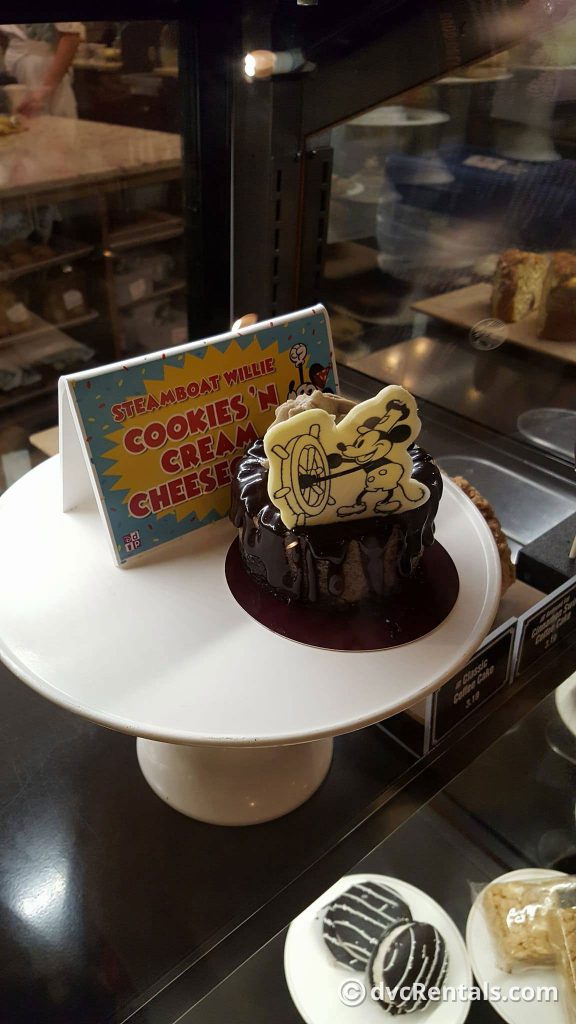 The Move it Shake it Dance and Play it Street Party in the hub area by the Castle was my next destination.  This was probably the most exciting and fun part of the celebration. All of the characters involved wore party hats and the emcee of the show made a big fuss about it being Mickey’s birthday. Of course, Mickey was the star of the show, his float was done up for his birthday, and he led everyone in singing and dancing in the streets.  It was really enjoyable, and the guests and Cast Members all seemed to have a blast. 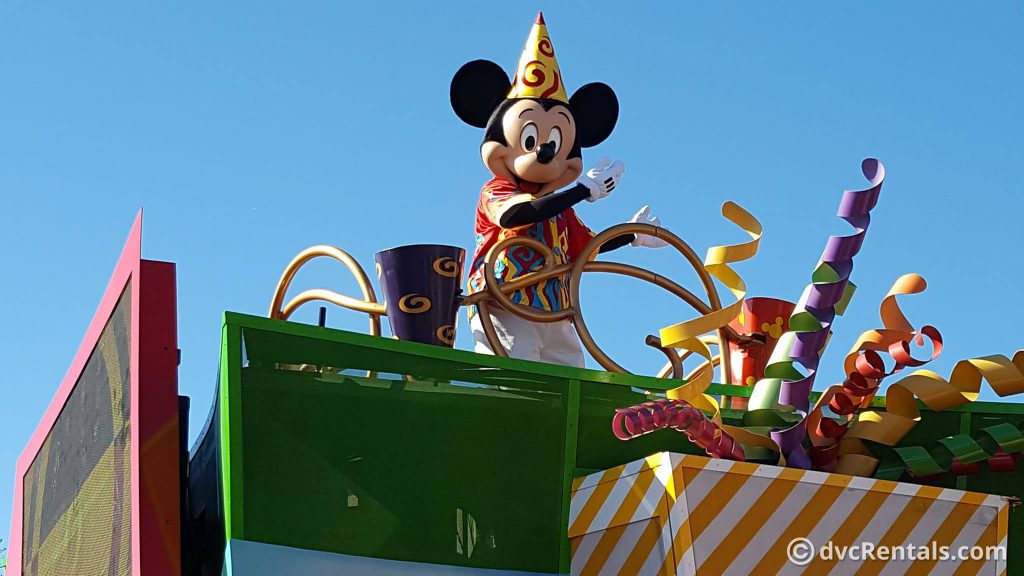 Not far from the Castle there were photo pass photographers waiting with “Happy Birthday Mickey” signs to hold. I was lucky to notice them just as they arrived and had a short wait for my picture to be taken. By the time I left the line had grown considerably. The photographer did a great job, happily obliging to take some shots with my camera, then proceeding to take his Official Photo Pass pictures. The Castle is in the background of the shots, I was so happy I was able to take advantage of the opportunity. 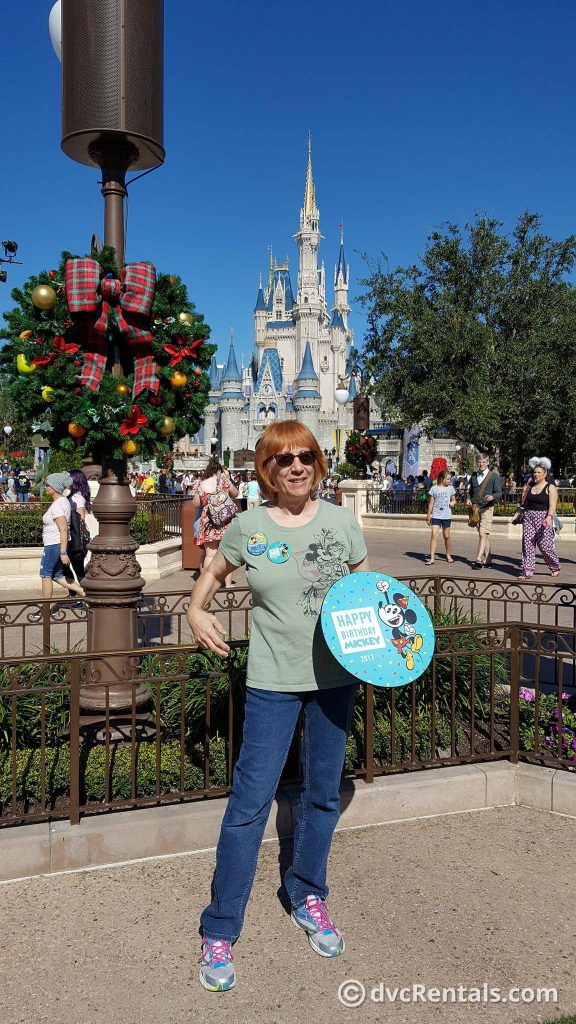 Although I was not there to see either, later in the day there was a dance party in Tomorrowland to celebrate Mickey’s birthday. There was also a special ending to the Fireworks in honor of Mickey’s 89th. 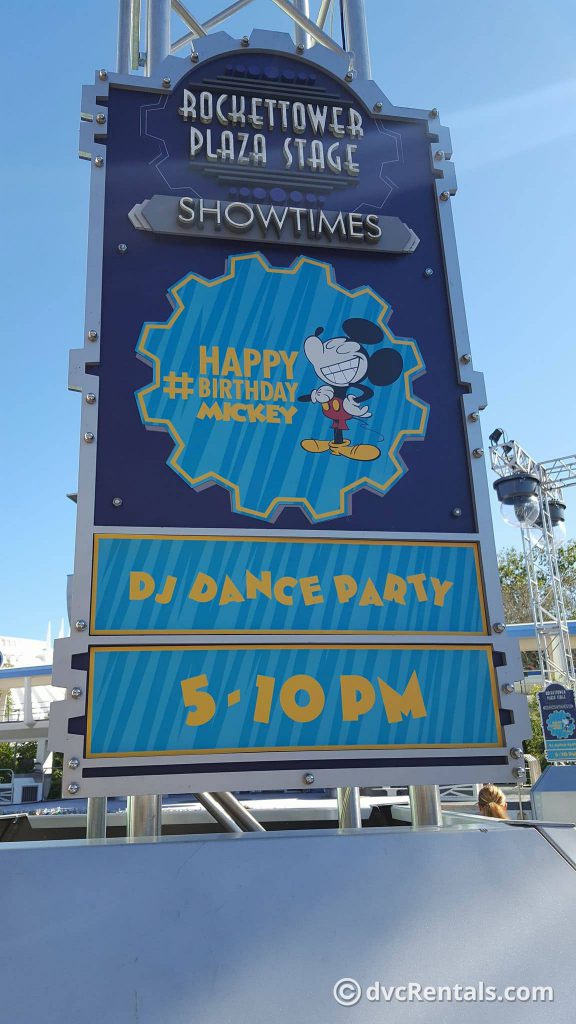 I hope they continue and expand celebrating Mickey’s birthday. I’d like to see it made a tradition.  In 2018 Mickey turns 90, it would be awesome to celebrate that milestone.  But hopefully Mickey’s birthday will be acknowledged every year, in my opinion he certainly deserves the recognition.