When you think about Disney, you think about the magic. Everyone does! You went to Walt Disney World as a kid, and it was the most magical place on earth! The character interactions throughout the parks and the character dining options are probably one of the biggest draws for families with kids, because the happiness these opportunities bring to a child is unrivaled!

I was very fortunate to have visited Walt Disney World when I was 11. Though my memory has faded on many of the details, when I think back on that trip, I can always remember the magic, and the happiness. I think, as an adult, that is one of the (many) reasons why I get so excited to go back when I am given the opportunity. It’s a feeling that can’t be beat. I love the nostalgia, but I also love that there is always something new to discover. On my most recent trip, we had some amazing moments courtesy of some pretty fantastic Cast Members that I will never forget! Below are my top 4 favorite experiences from this trip, all made possible by exceptional Cast Members and unparalleled service. These are the things that Disney is made of!

We arrived at Disney’s Saratoga Springs to check-in around 7pm and my coworker was immediately offered a button as it was her birthday (how awesome is it that we got to take her there on such a great day?!). Now, I know that anyone can get a button, but it still makes for a pretty cool experience! What I didn’t realize was that when we finished our meal at the Turf Club an hour later, we would be finishing up with a big cupcake just because my coworker wore her birthday button! I was blown away and I think the look on Tori’s face shows that she was pretty happy too! Aside from wishing her a happy birthday right off the bat, there was no indication from the Cast Member that anything further was in store. It was an awesome surprise! 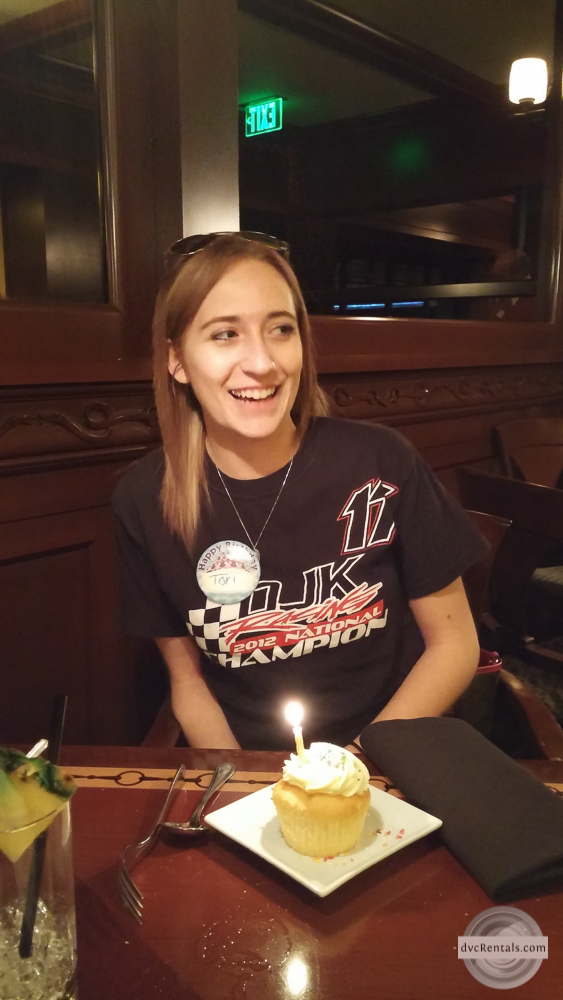 And let’s give credit where credit is due – the food was amazing! If you haven’t been, try the Turf Club at Disney’s Saratoga Springs. I had the Cripsy Free-Range Chicken Breast with Three-Cheese Macaroni & Cheese and Green Beans Almandine. 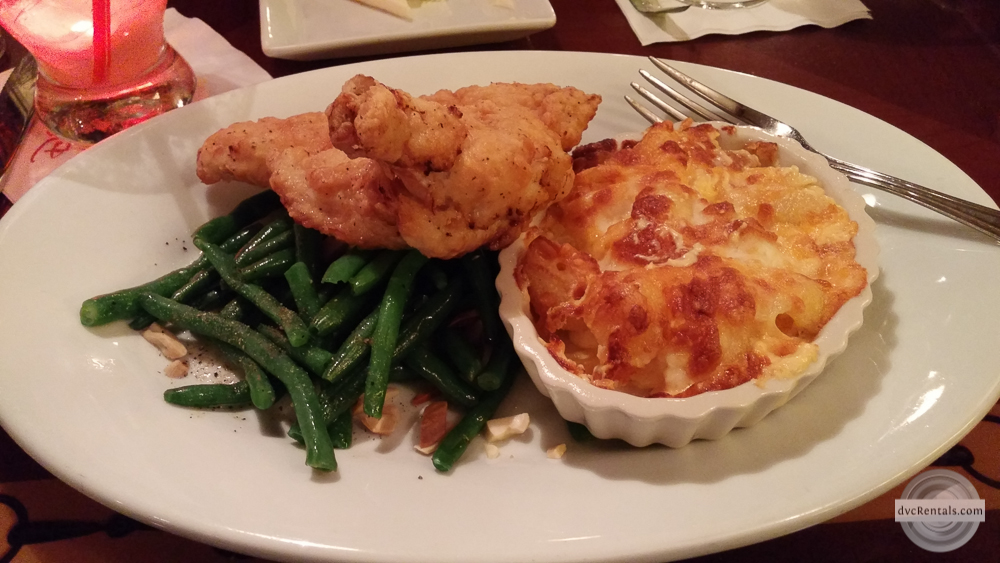 Throughout the trip, my coworker was wished a happy birthday everywhere she went – Cast Members never miss the opportunity – and I think that’s pretty awesome! We rode the bus from Disney’s Saratoga Springs to Magic Kingdom one day, and a family with two small kids followed us onto the bus. The mother was wearing a birthday button and once the family was situated and we started to drive away, the bus driver made an announcement about a birthday on the bus, and played happy birthday through the speakers. I don’t think those two kids could have been more thrilled or more proud that day, and for me, that’s Disney!

On our second day in Disney, we started our morning with breakfast reservations at Whispering Canyon Café at Disney’s Wilderness Lodge.  I had heard great reviews about this place from friends who had been, so I was very excited to get our trip started on an amazing note. I could not have been more impressed! The food was great (I had bacon, eggs, and hash browns – delicious!) but the fun started way before our meals even made it to the table. When we sat down, we were given two options: 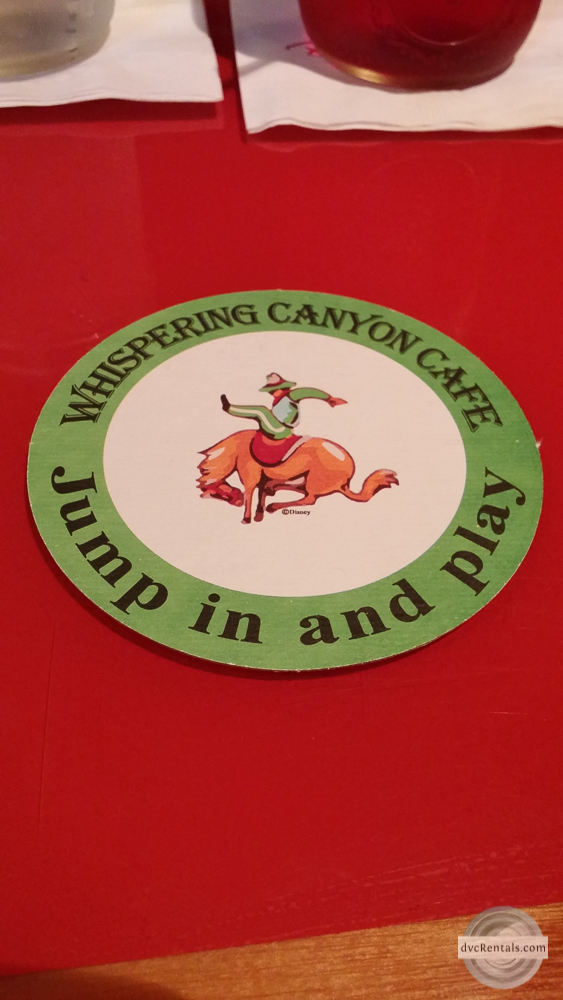 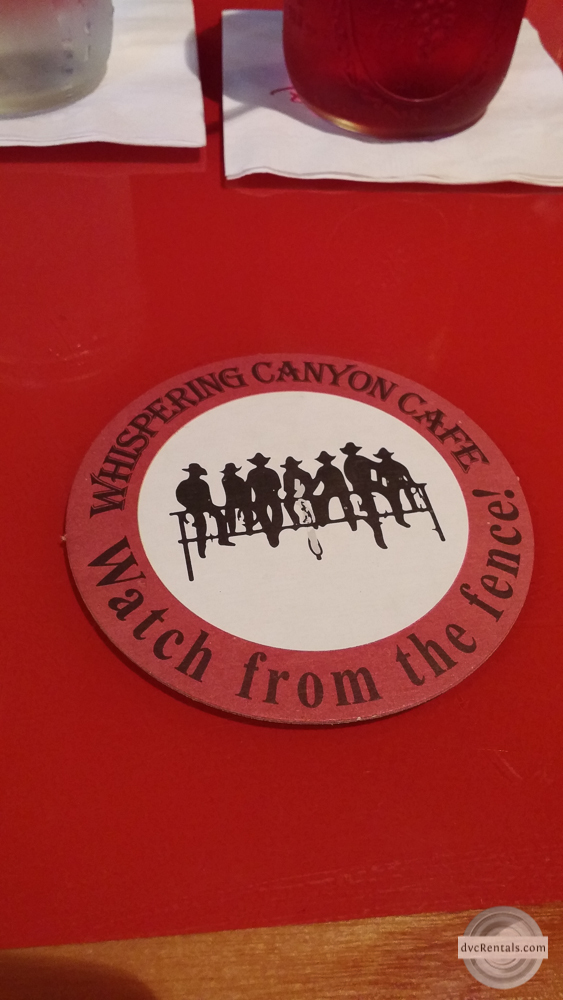 As you may have guessed, we flipped to the green side and chose to play. I will never, ever, ever forget this breakfast! Our waitress was the one and only “MT Wallet” and she was an absolute firecracker. She introduced herself quickly, took our drink order, and then threw straws and napkins at us! I was not expecting that! From then on out, there was only sass and hilarity! There was a little boy, maybe 4 years old, at the table next to us who MT Wallet referred to (by shouting it to the entire restaurant on several occasions) as her twin. I couldn’t contain myself. Tori decided to ask for some ketchup, and the next thing you knew, she was all over the restaurant with a tray of 20 bottles, delivering ketchup to any table that yelled for it! You asked for it, you got it! I think I laughed more than I ate that meal, and it was all because of our server. Her enthusiasm and her ability to gauge her crowd were incredibly inspiring. She could not have been more perfectly suited to her position at Disney and I had the best breakfast of my life because of that Cast Member’s service. To the one and only MT Wallet!

Towards the tail end of our trip, we spent the day at Disney’s Hollywood Studios riding the Tower of Terror (twice in a row!), seeing Fantasmic in the pouring rain (actually pretty amazing!) and having dinner at the 50’s Prime Time Café. This restaurant was completely new to me, so I had no preconceived ideas about how the meal, or the atmosphere, would be. Looking back, I think maybe that was the best possible way to go into this dinner. We had a reservation, but the place was absolutely packed when we arrived. I know why, now! We waited outside for our table to be called, and when it was, the rest was a hilarious whirlwind. The Cast Member came outside and started yelling for us to come inside, it was time for dinner. It turns out that the setting is meant to be a big family home in the 50’s and all of the servers are uncles, aunts, cousins or siblings. It’s noisy and it’s awesome! The meal was delicious – I went with Aunt Liz’s Golden Fried Chicken. Our cousin came to check-in on our meal, and wanted to know who hadn’t eaten all of their dinner. Both Melissa and Tori pointed at me! Our cousin did not like tattle-tails and threatened some time outs. He also made sure that Tori didn’t get away with it, and hand fed her the rest of her vegetables while singing “Little Bunny FuFu”.  While I wasn’t able to capture a photo of this (because I was too busy laughing and filming it) I did manage to calm down enough to enjoy desert. There is always room for desert, even if the vegetables aren’t fitting! 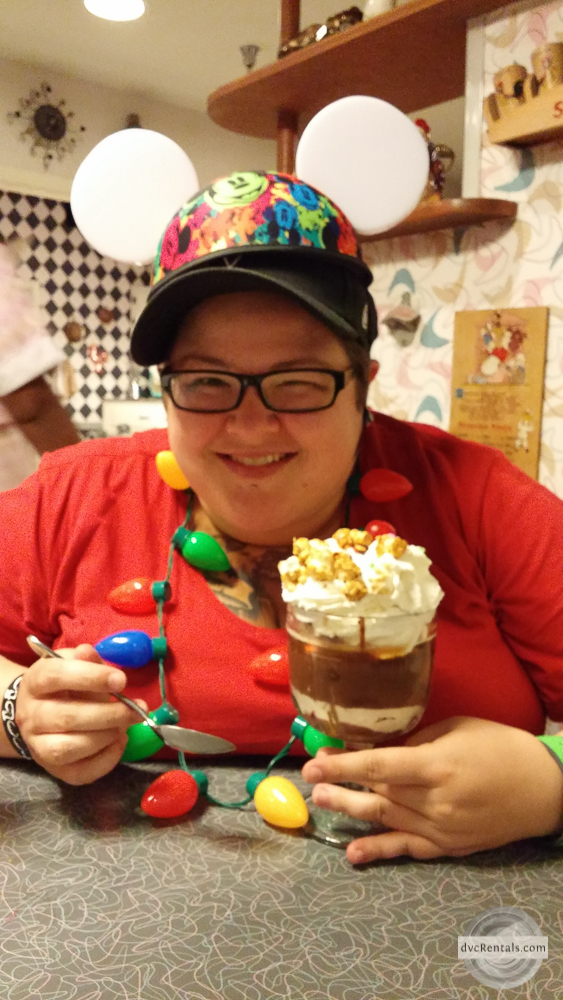 Our cousin (whose name I’m sorry I’ve forgotten) came and sat with us, joked with us, and shared stories with us all throughout our meal. It’s his job, but he went above and beyond to make each table he served feel like they were the only people in the place. He chatted with us about his home country of Morocco, told us about some of his favorite things, and then scolded us for not finishing our vegetables. I laughed until I cried, and that’s the kind of experience I will never forget.

If you have never been to Trader Sam’s Enchanted Tiki Bar at Disney’s Polynesian Resort, you definitely should go! It’s a tiny little place that you would probably pass and not think twice about it, if you didn’t know what it was. It’s definitely a blink-and-you-miss-it entrance, but what’s inside will not disappoint! Because it is so small, we had to wait a bit of time to get a seat. You can order appetizers and drinks, and the drinks come in some pretty cool looking souvenir glasses (that you can take home for a price). 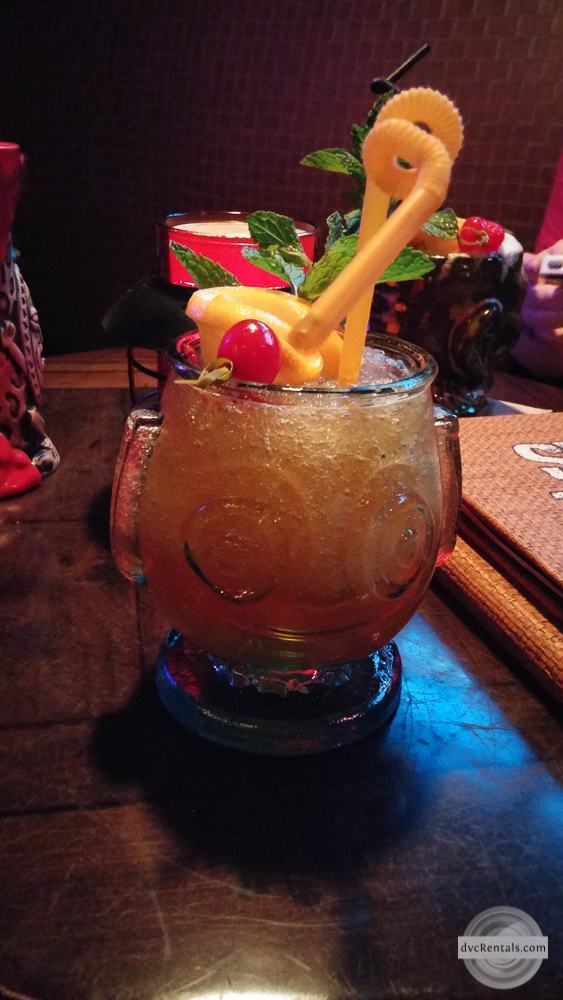 The best part about this place is once again the Cast Members. They make the experience. Every drink that someone orders comes with a song and dance, so to speak. If you order the HippopotoMai-Tai the lights dim and a storm starts in the bar, complete with sound and visual effects. The Cast Members all scream about hippos being in the trees, and everyone in the place gets involved! If someone orders a Nautilus, the Cast Members throw on an inflatable inner tube and run through the bar to deliver the drink! Volcanoes were erupting, storms were raging, food and drinks were flowing and out of nowhere the staff all announced that they were on strike! A few sat on the floor in the middle of the room and twiddled their thumbs, the bartender leaned on the counter and propped his head in his hands, and this lasted for a good few minutes. Everyone was laughing, and once again my night was made.

There is something wonderful to be said about exceptional service, and going above and beyond the scope of your duties. What I will remember and take away from this Disney trip is exactly that. Exceed people’s expectations. Shock them by going the extra mile to make them laugh. Learn your audience and cater to them. Make them happy. My trip was full of amazing experiences, and the magic of Disney was out in full force. On my next trip, I’ll be sure to go out of my way to thank the Cast Members for everything they do. They are what Disney magic is made of.