Bringing the Magic of Disney Home to the Kitchen

With Disney, it seems that there can be a large amount of planning. One being dining, there are countless options to choose from, and it is impossible to eat at them all in one go. There are many restaurants and certain iconic food items people say you must try! 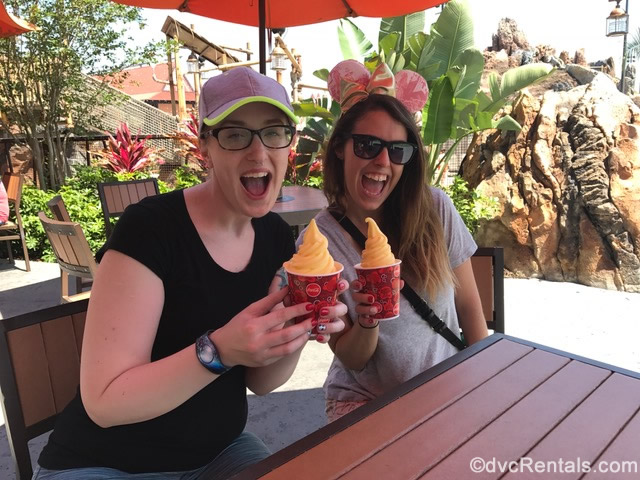 I wanted to try to make recipes from Disney that are easy, do not require complicated ingredients and won’t break the bank. I thought I would start small and make two of my absolute favorite foods from a resort that is on the top of my bucket list Disney’s Polynesian Villas & Bungalows!! 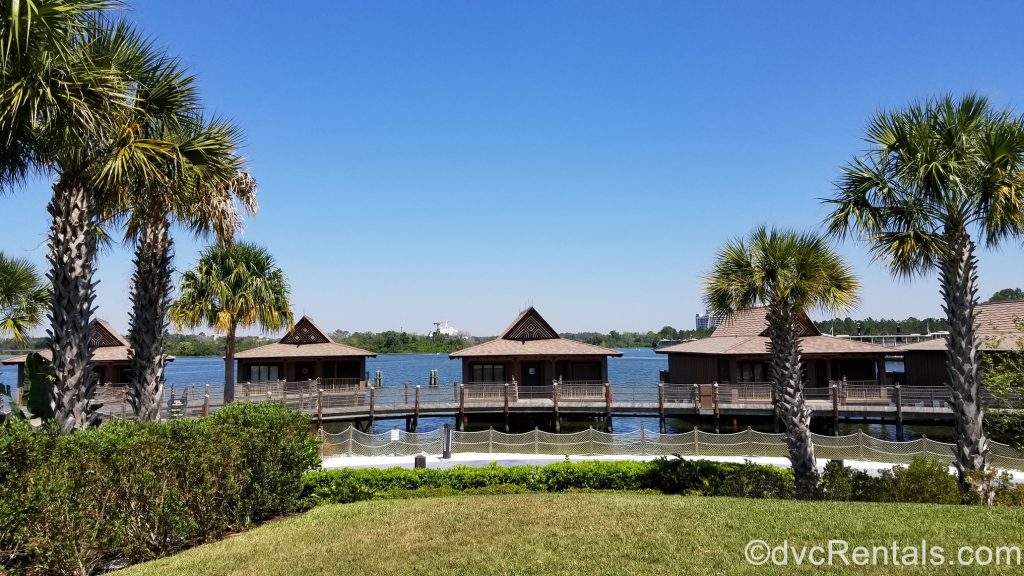 Although I have never stayed at Polynesian, I have had the opportunity to tour the resort and eat and shop there. The theming alone will have you in awe, and the food will have you wanting to come back for more! 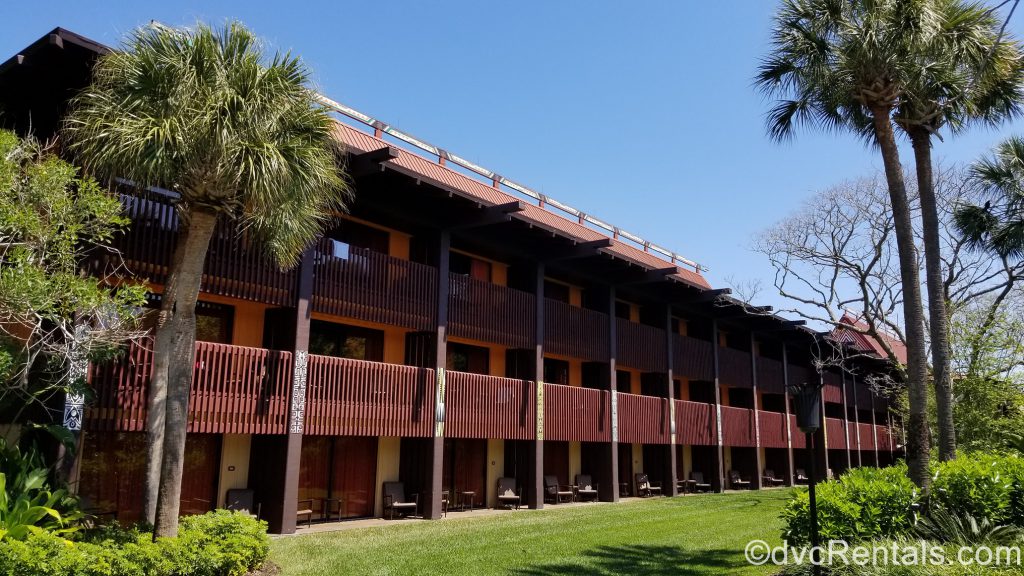 If you have not guessed it yet, I attempted (and succeeded, yay!) in making Tonga Toast and Dole Whip! If you have never heard of these food options – Tonga toast is banana stuffed French toast with a strawberry compote and Dole Whip is a pineapple soft serve.

On one of my more recent work trips with David’s Vacation Club Rentals, my co-workers and I had breakfast at Kona Café, which is a restaurant located at the Polynesian. 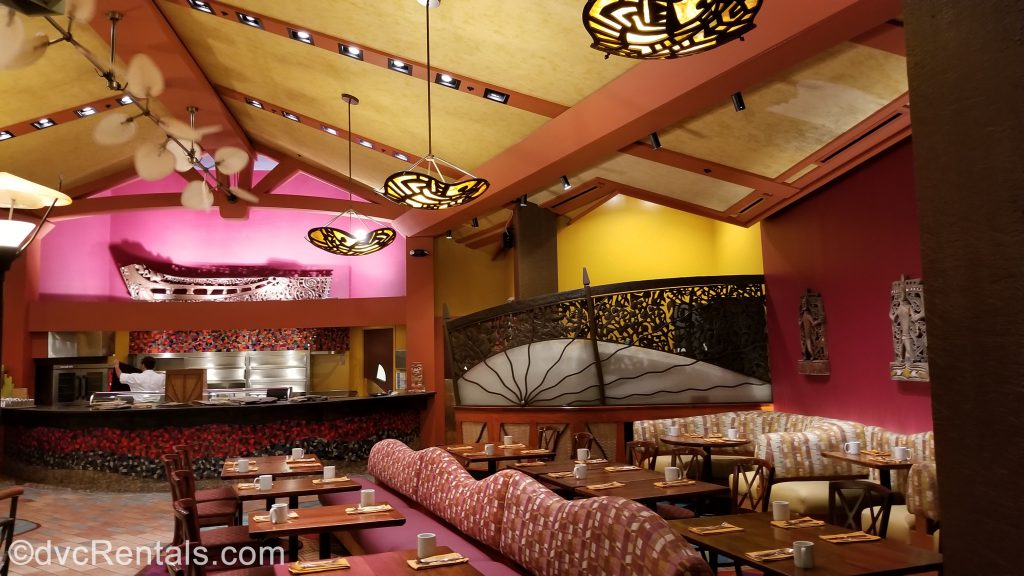 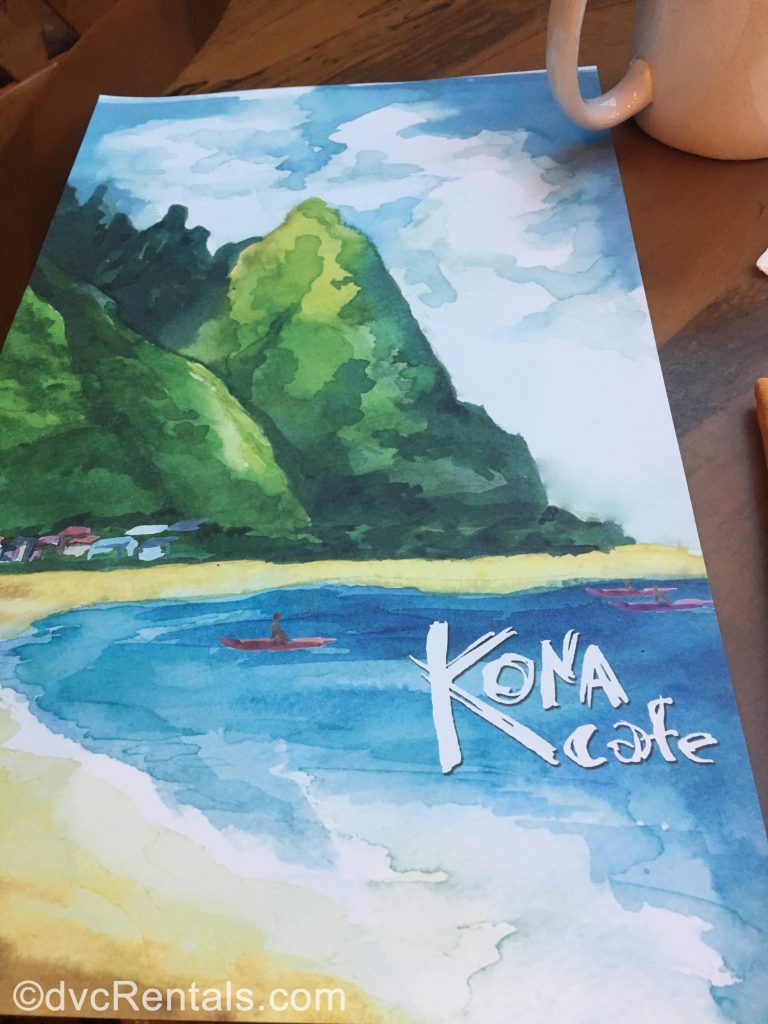 We ended up ordering a bunch of food to share ‘Ohana style because we all wanted to try the Tonga Toast, Macadamia Nut Pancakes, Ham and Cheese Omelet, and Seasonal Fruit. They did not disappoint and this is what gave me the inspiration to attempt to make this delicious creation! 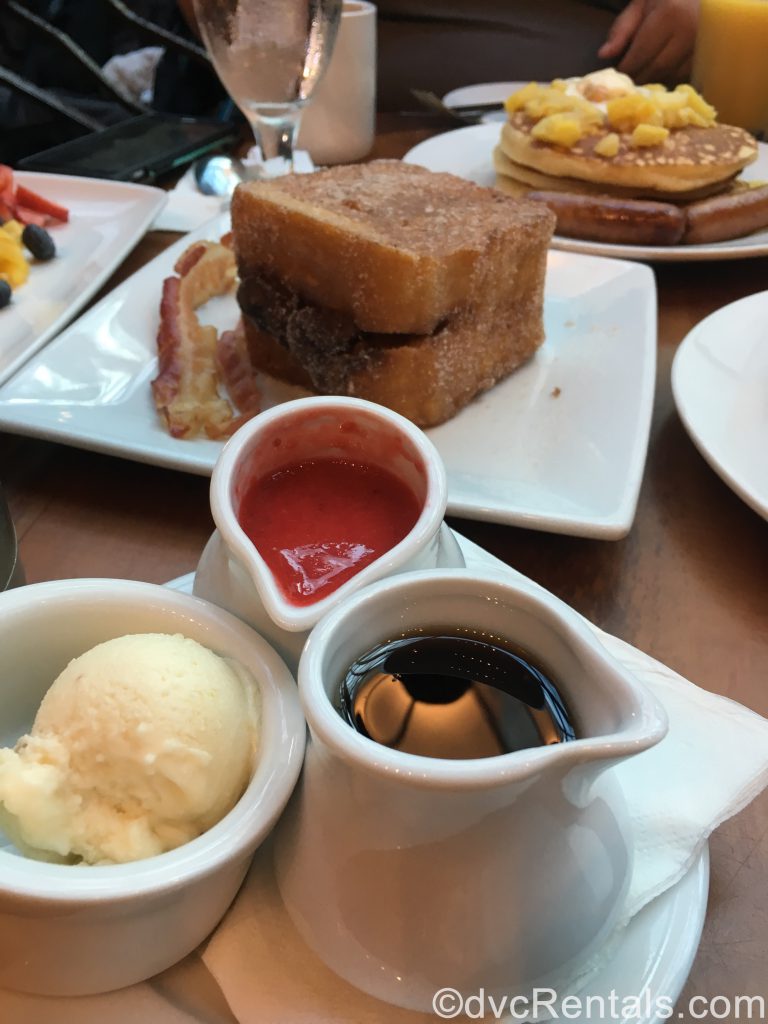 After my very first attempt at making Tonga Toast, I was surprised at how easy it was to make. 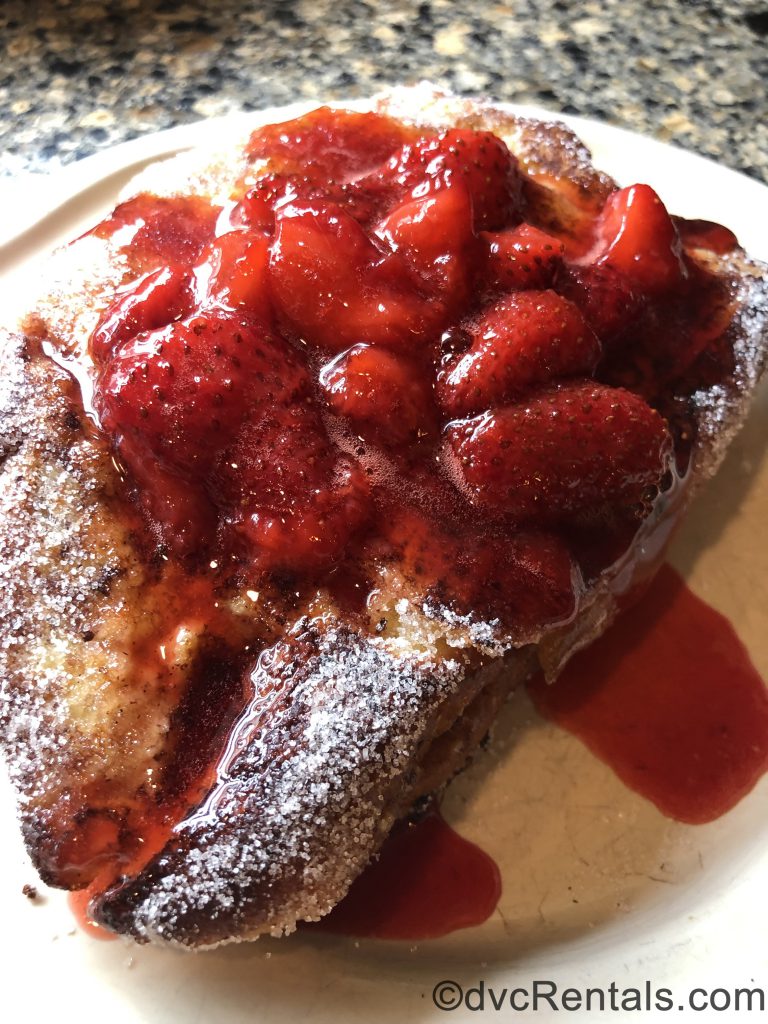 The recipe that I used:

Ingredients for the strawberry compote:

Ingredients for the Tonga Toast: 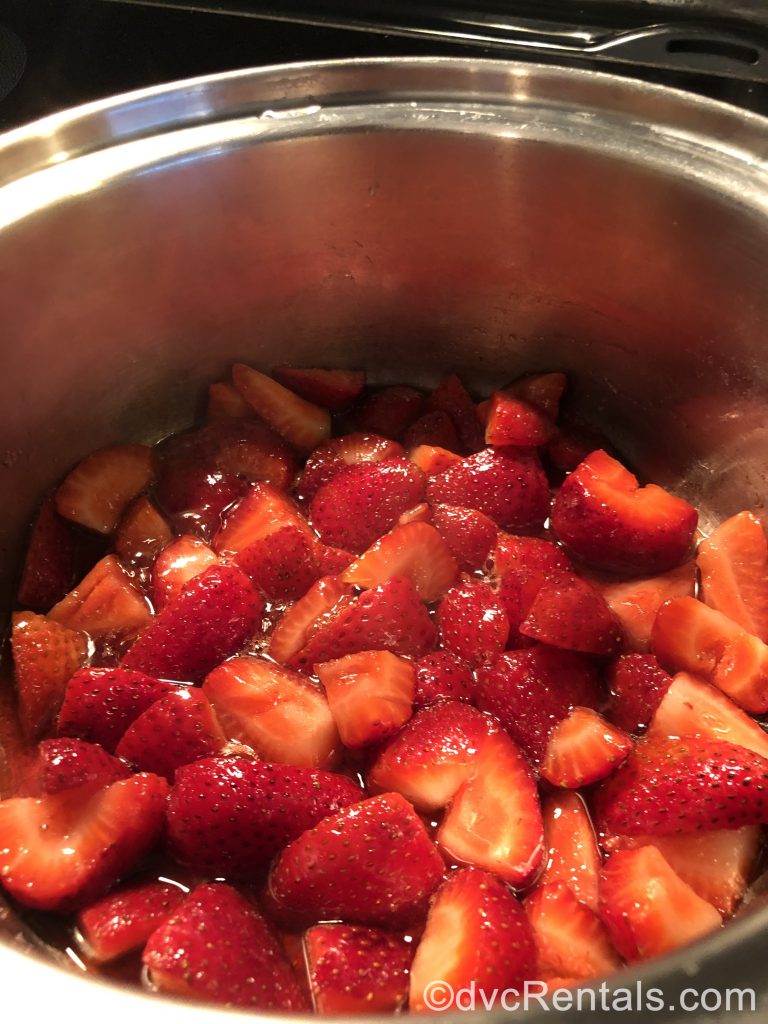 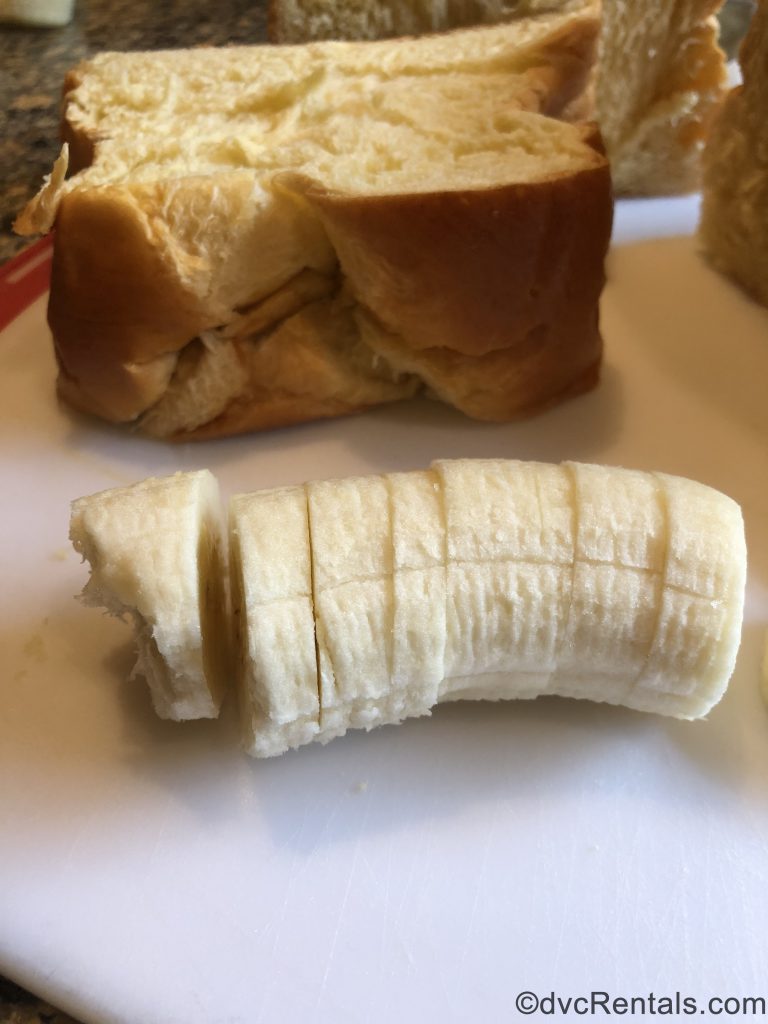 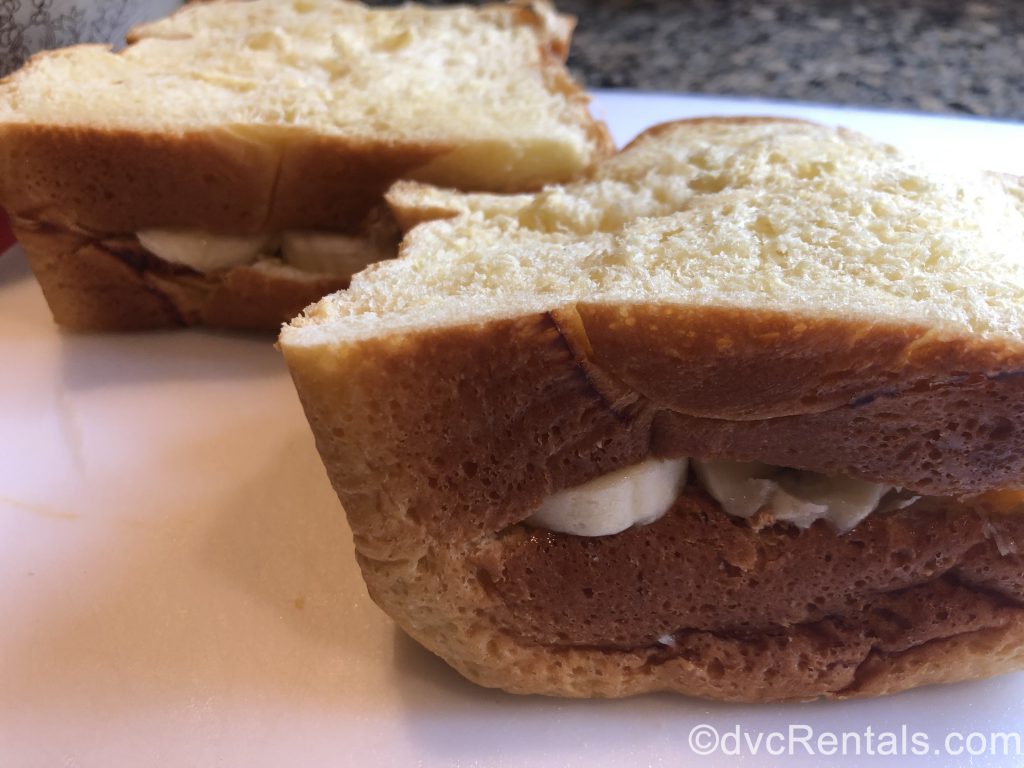 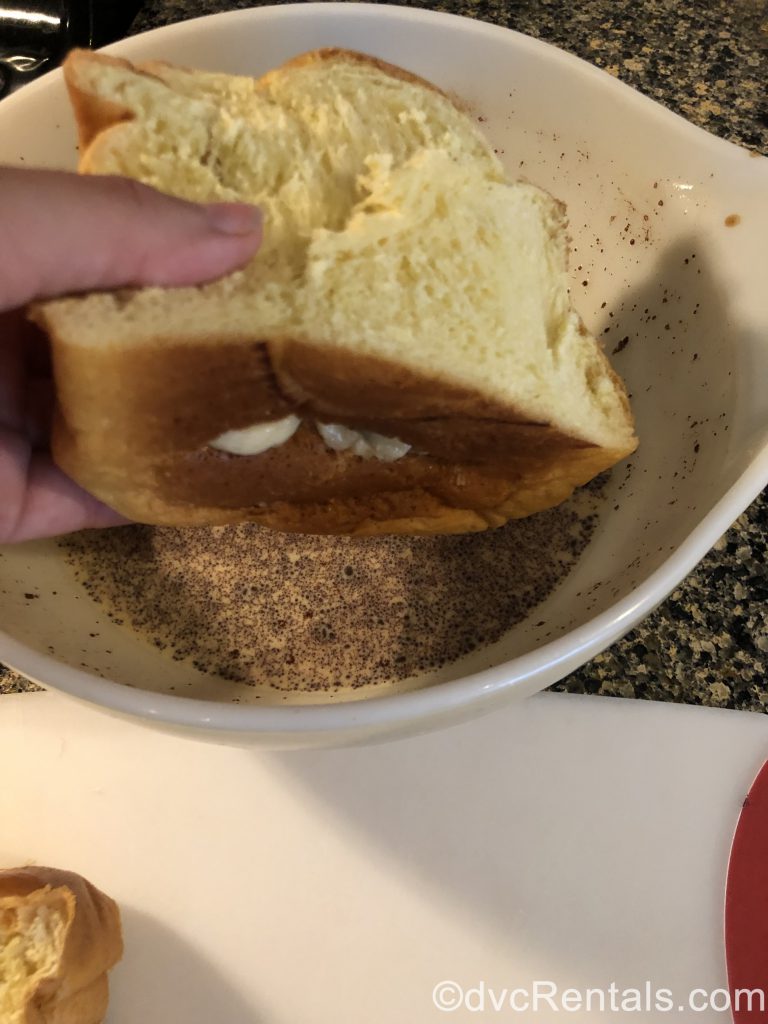 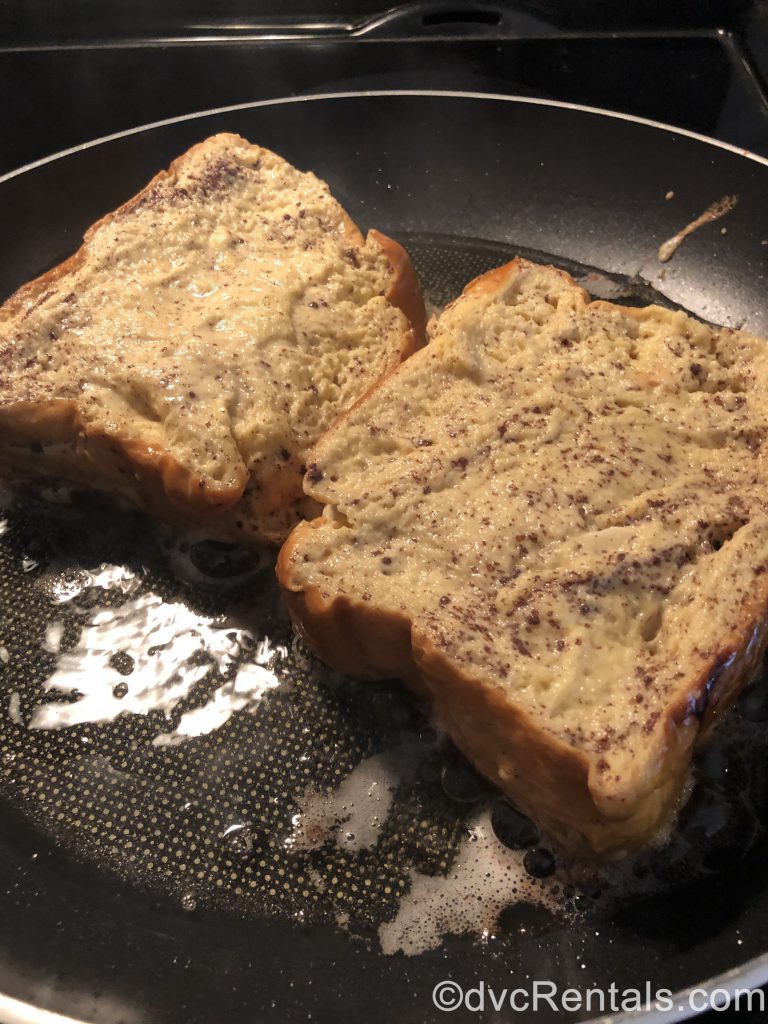 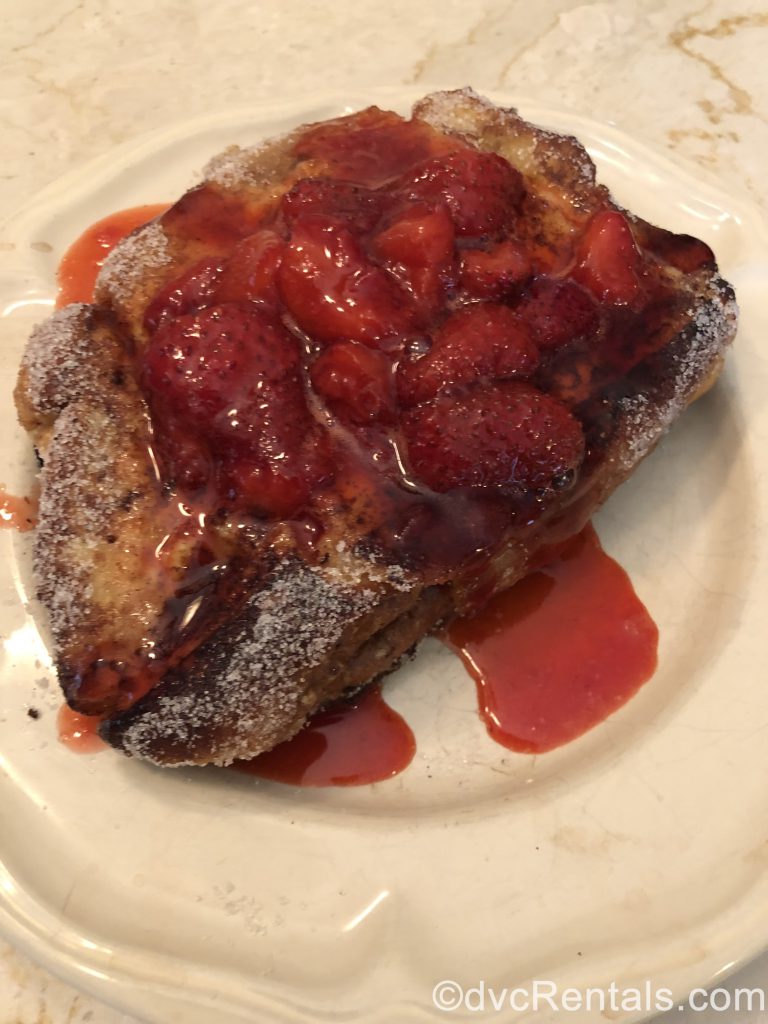 For the strawberry compote, the recipe I followed said it takes about 5 minutes. I believe mine took slightly longer; however, I kept my eye on the mixture and stirred every so often, so it did not burn.

I personally found using brioche was the best bread to use as it is thicker than regular bread. 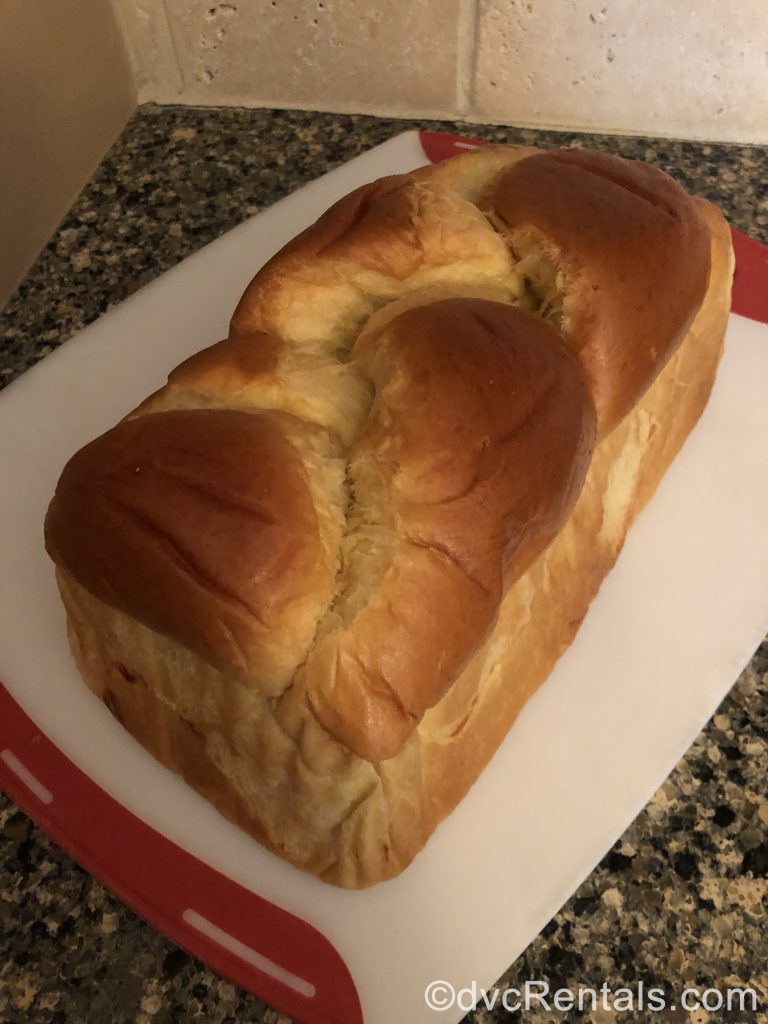 I cut slits into both sides of the bread as I did not read the instructions correctly (even though you only need to do one side), but I was able to see that the banana was stuffed into the entire slice of bread and I did not have a problem flipping the toast and losing any bananas.

I did not use one cup of sugar and cinnamon. I used a ½ cup of sugar and eyeballed the amount of cinnamon as there will be extra leftover as you are only coating the toast. I also just used a small dinner plate instead of a shallow bowl.

Also, be very careful when dropping the toast into the hot oil on the stove as the bread is thick the oil will splash if you are not mindful.

Onto the next classic!

The recipe I followed to make the Dole Whip: 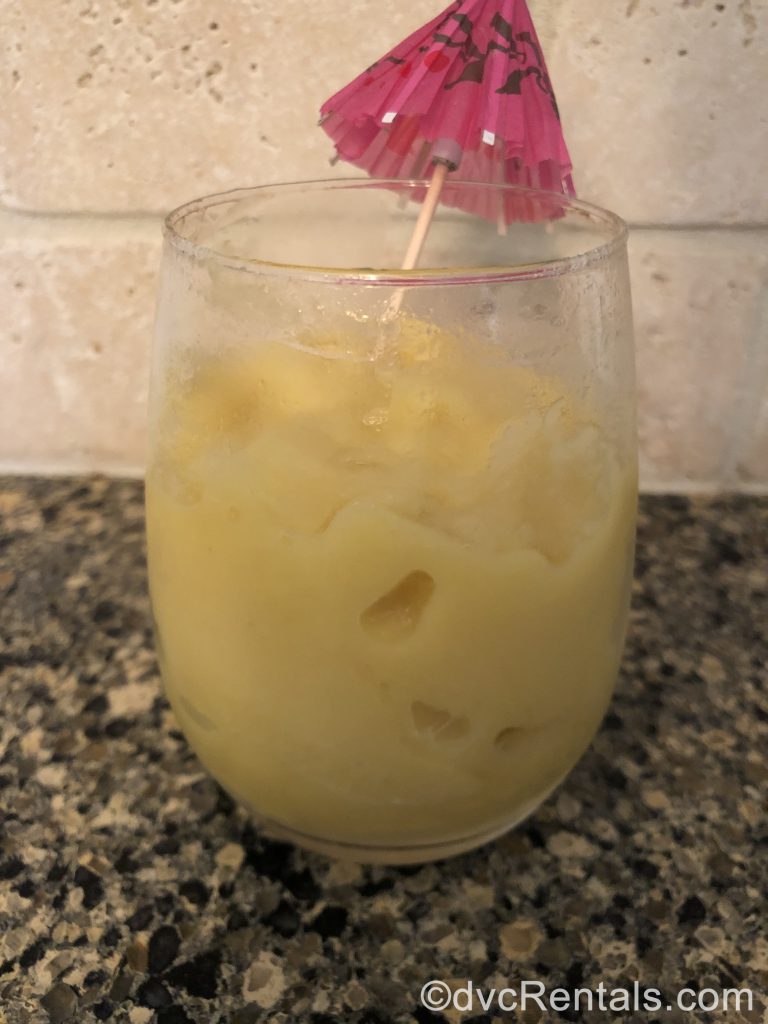 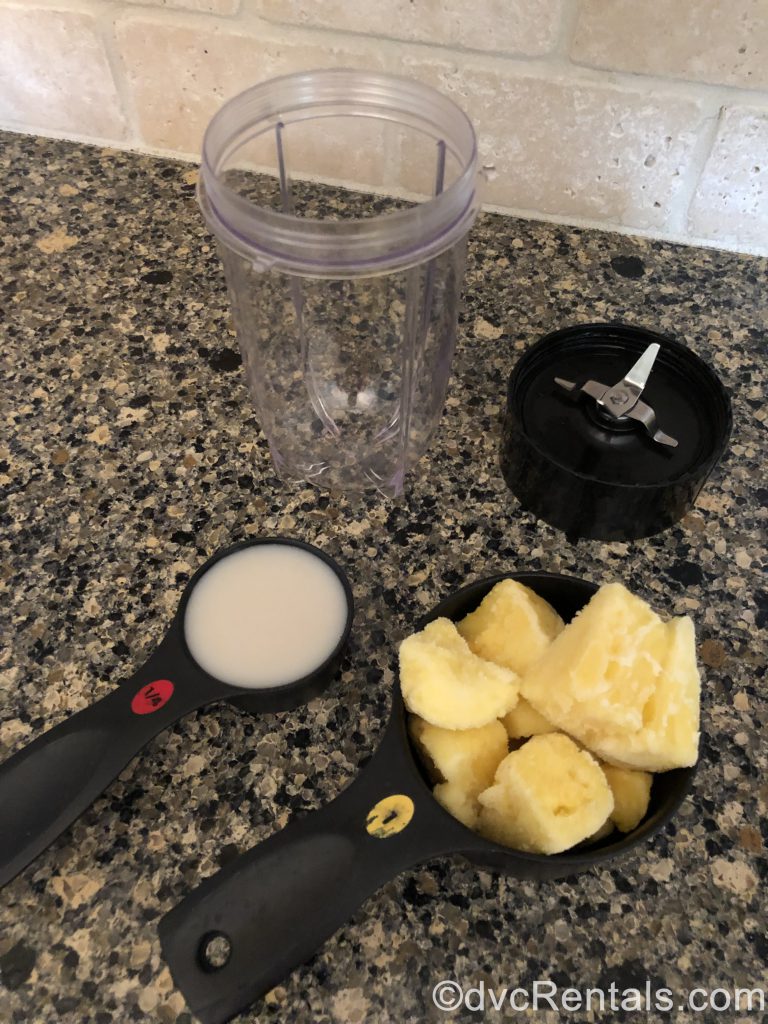 Could not get any easier!

If your blender is not very powerful like the blender I used, you may need to add a little more liquid. I eyeballed adding more milk by splashing little bits in at a time. I probably used close to another ¼ cup. I used a Magic Bullet and filled the cup to the top, so I used about 11/2 cups of frozen pineapple as it is a small blender. 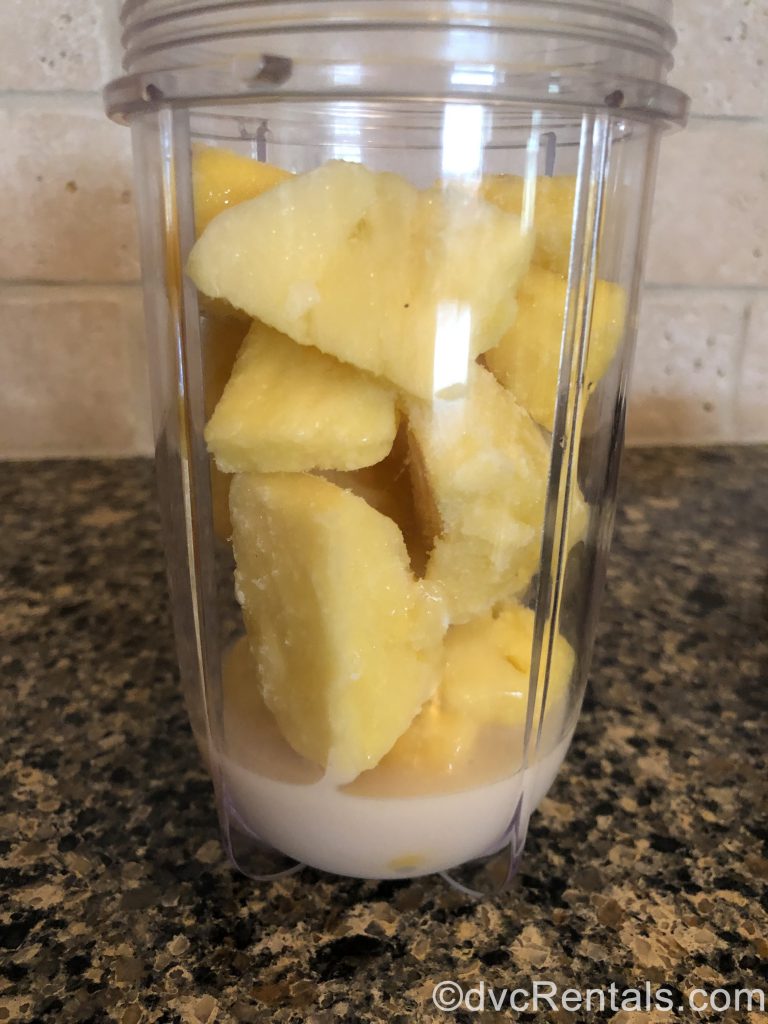 It says to use milk of your choice (most recipes I found say to use coconut milk). I realized I did not have coconut milk and end up using unsweetened vanilla almond milk and it tasted delicious (the pineapple overpowered the vanilla) and it tasted exactly like a dole whip bringing back so many Disney memories!

The amount that it made was a good single serving, so if you want to make more, I would double the recipe! 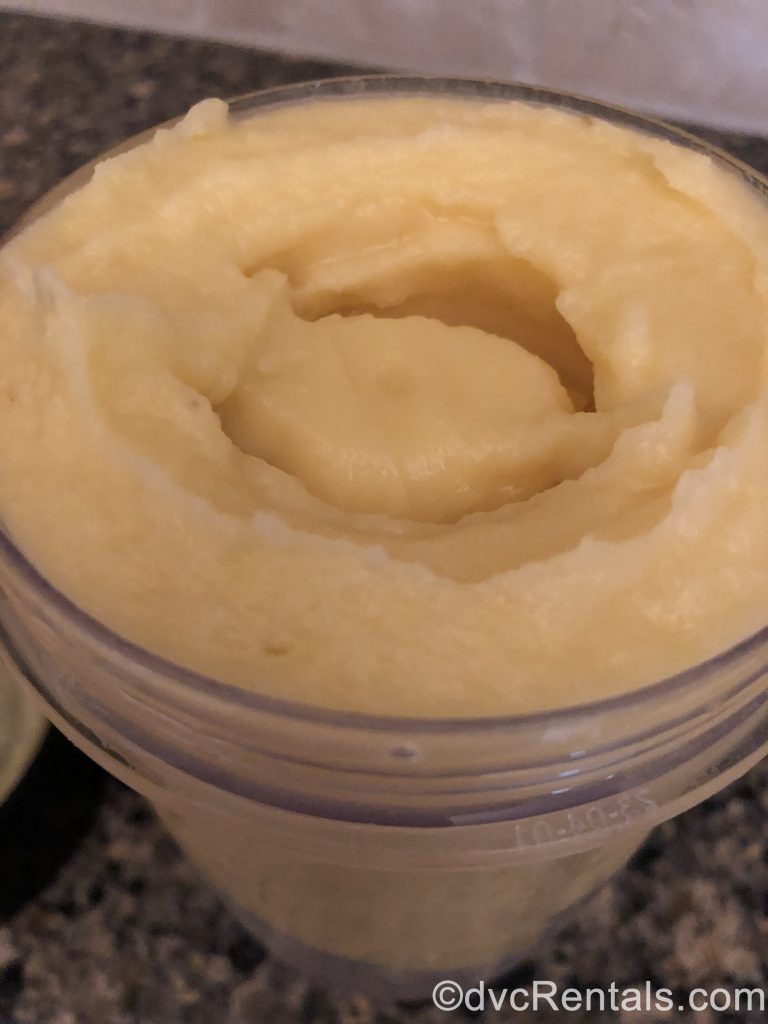 That’s it for now. These recipes are certainly two Disney classics. I will absolutely be making these items again in the future, and I might actually share them this time! 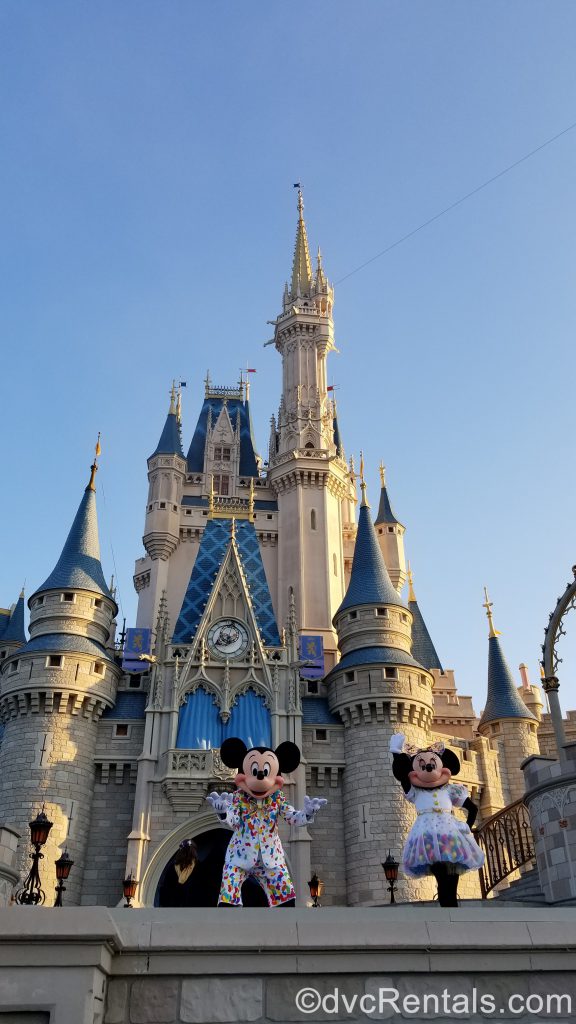 Hope everyone has a Magical time creating Disney classics in the kitchen. Please let me know what your favorites are, and I will have to try to make them!