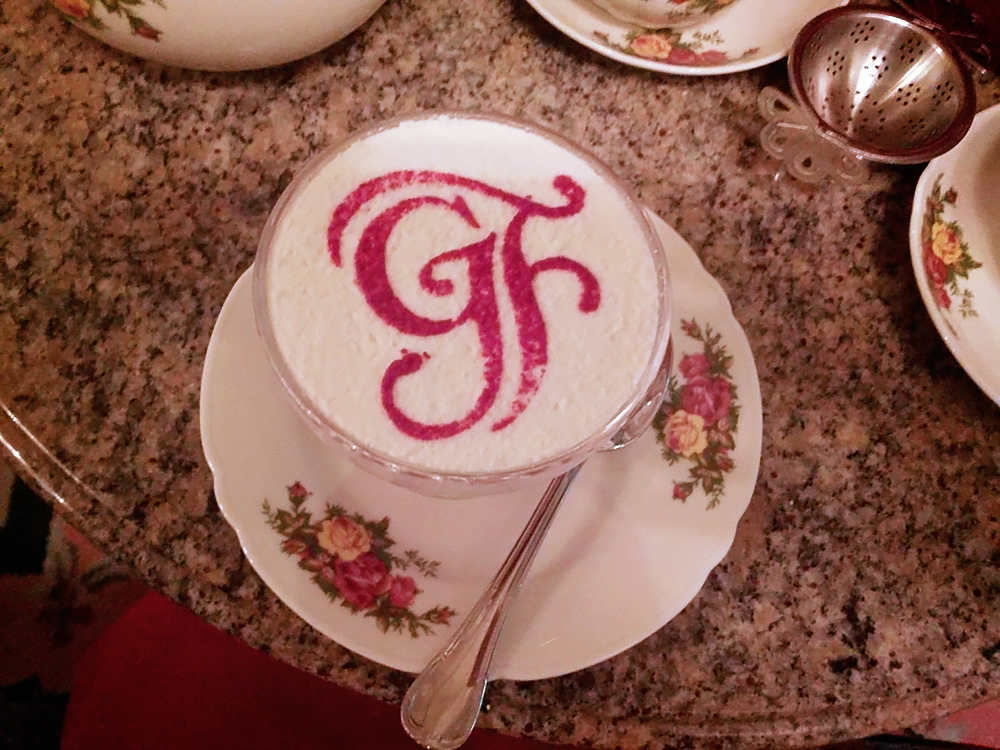 Recently my daughter Becky and I decided to try the Afternoon Tea at the Grand Floridian Resort. When we arrived, the piano player in the lobby was tickling the ivories. This enhanced the experience and created a great background prior to the tea. The event takes place in the Garden View Tea Room, a small place tucked away in a corner of the Grand Floridian on the first floor. The far wall is entirely composed of windows which give a view of a small garden outside of the resort. 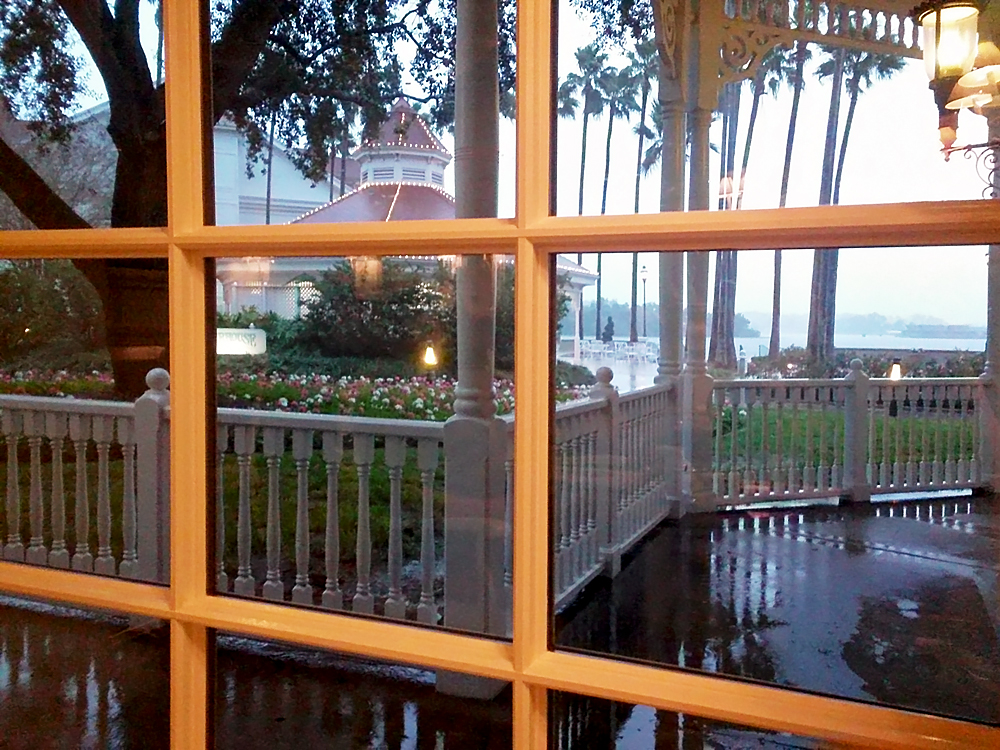 Once we were seated we were given a menu which had several options to choose from, each with multiple courses. Prices ranged from $12-$38. We chose the three course Buckingham Palace Tea which cost $23. We had several teas we could choose from. I chose the Princess Breakfast tea which is a special blend for the Garden View Tea Room. It is described as a decaffeinated tea with vanilla beans and a hint of strawberry. It tasted like a sugar cookie in liquid form, especially when I added two sugar cubes! My daughter chose Eros, a black tea also with vanilla flavors that had a lighter taste. We were given individual tea pots with tea cozies to keep the tea warm when we weren’t pouring. Each tea pot made about four cups of tea. 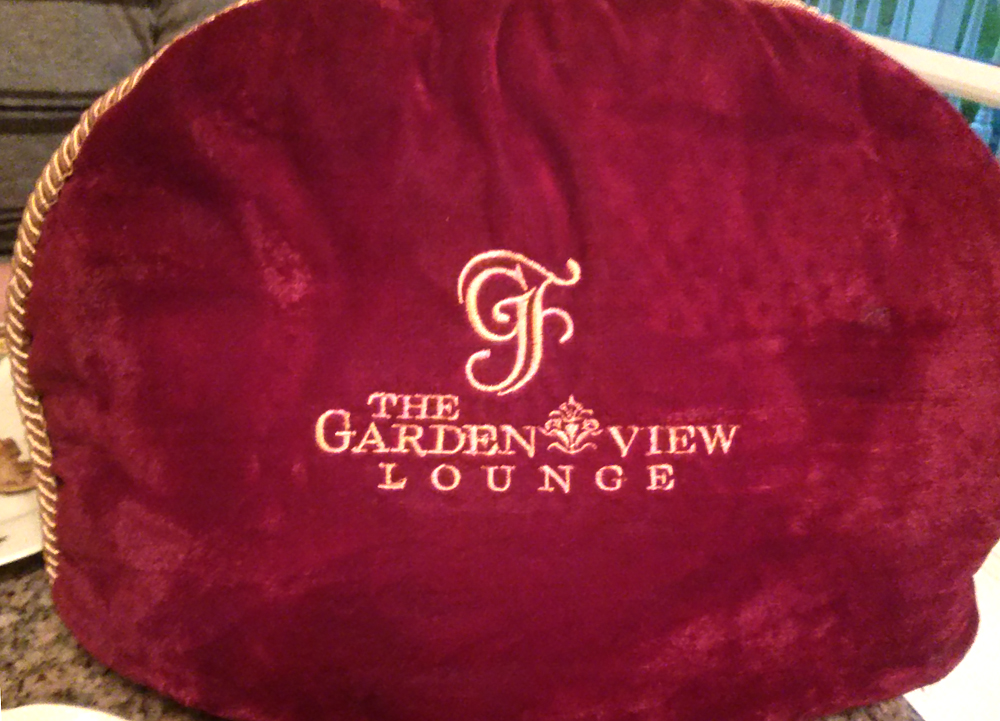 Now onto the yummy food! The first course consisted of five finger sandwiches and a delicious, though a bit on the small side, onion tart. The sandwiches served were salmon, cucumber and watercress, egg salad, chicken curry and roasted yellow beet. Since Becky does not eat meat they were kind enough to let her make the substitution of her own choice. She elected to get a second salmon sandwich instead of the chicken. Surprisingly the cucumber and watercress was the stand out sandwich for both of us, very flavorful with a thin layer of cream cheese. 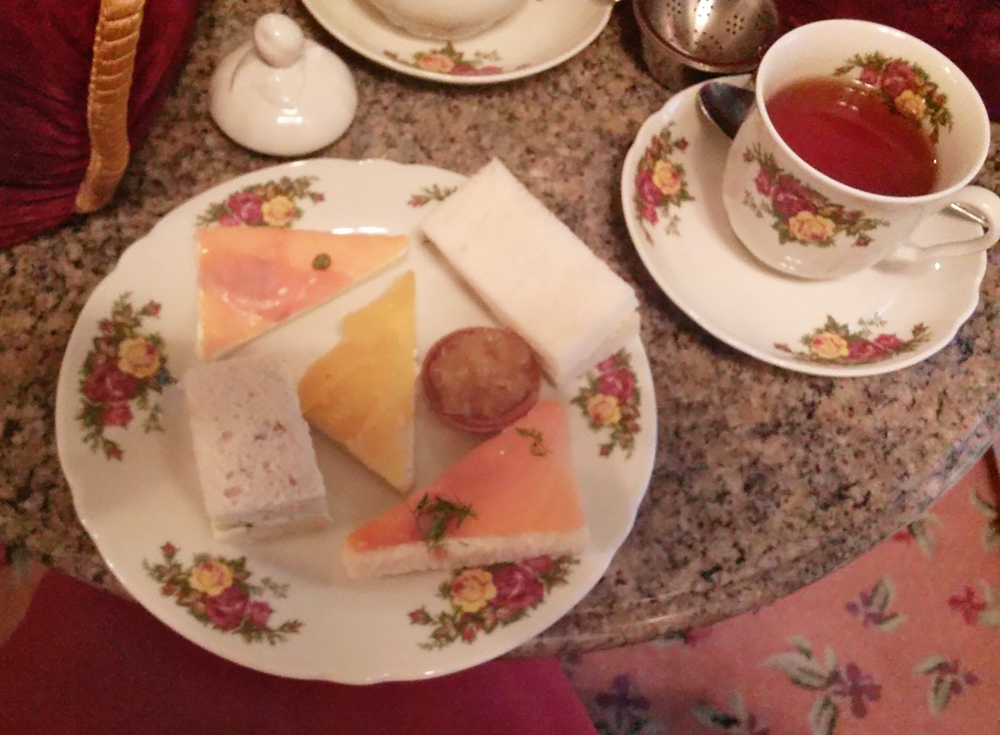 The second course had two items, a large scone with raisins and a strawberry tart. These were accompanied by three spreads – strawberry sauce, cream and a delicious lemon curd. I wish I could have taken the lemon curd home with me! It was a light lemon flavor and went well alone or combined with one of the other spreads.

The last course was dessert, which we thought was a little superfluous since the prior course was more than sweet enough to be a dessert. We were given three choices to choose from: a trifle, strawberries and cream or three pastries. The trifle that day was cranberry flavored which didn’t appeal to either of us. I chose the strawberries and cream and I did not regret it. I was given a large bowl of whipped cream with a layer of strawberries on the bottom. Becky had, a chocolate éclair and a white chocolate covered strawberry. 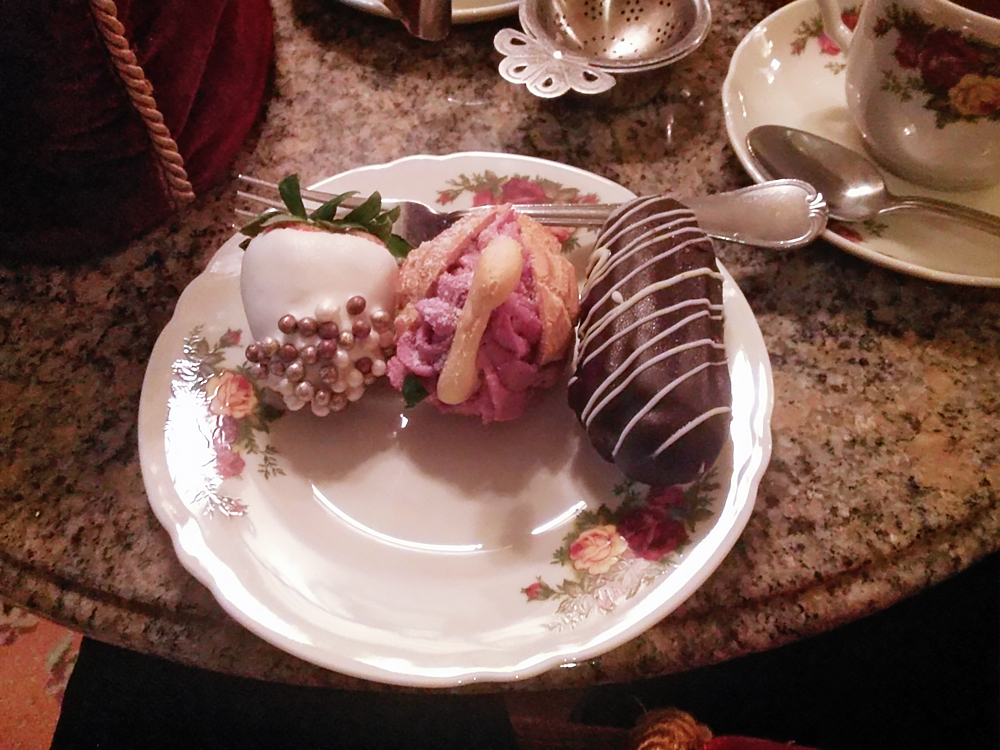 The meal from start to finish lasted about an hour. There was a small wait to be seated when we arrived, which they apologized for and were very kind about. We had a great view by the window, and our waitress was wonderful at explaining each item in every course and accommodating Becky’s dietary restrictions. We had a wonderful time and plan to go back again for another experience and try a different tea.