Now that Walt Disney World has reopened, I was curious about how social distancing would occur at the Magic Kingdom. Comparing it to Epcot, which I had visited the week previously (and felt totally safe), the Magic Kingdom is smaller and a little more unknown on how it would work.

I prefer to drive to the parks and walk to an entrance, yet with the Magic Kingdom, you have to take Disney transportation to get there. However, I had read reports and seen pictures of others who had already been there. With few exceptions, guests were saying they felt comfortable at the Magic Kingdom, and so my friend and I decided to give it a go. The two of us agreed if we got nervous, we would leave. 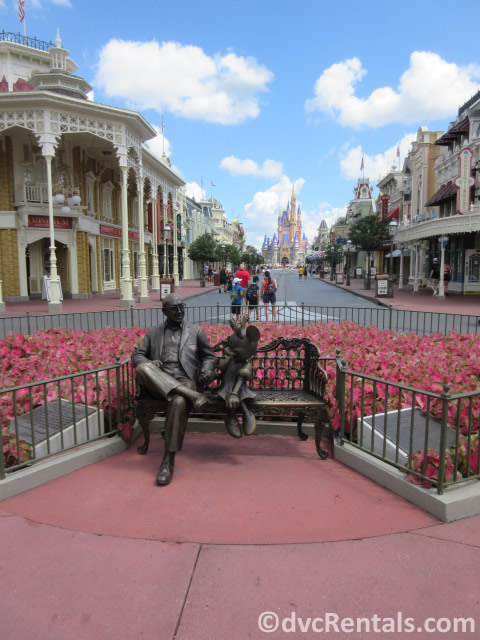 The park was scheduled to open at 9 AM. Before the pandemic, guests would usually be allowed through the park turnstiles just prior to the park opening. They would then congregate in groups in front of the Magic Kingdom, taking pictures and hanging out while waiting for the park to officially open. This is no longer possible now that distancing rules are in effect. So you drive to the Magic Kingdom parking lot and are held at the toll booths to wait in your vehicle.

The day I was there, they started letting cars in at 8:15 AM. There were not a lot of cars at that time, and parking was easy and plentiful. It was an easy walk to the Transportation and Ticket Center to get either the ferry or the monorail to the Magic Kingdom. 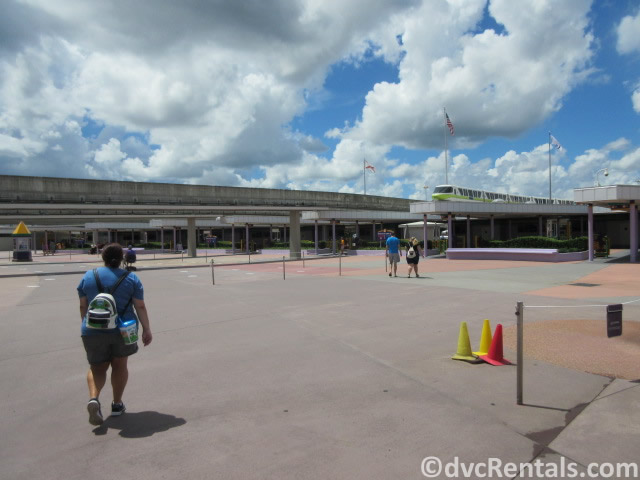 There were signs all over explaining safety regulations, the need for distancing and masks, and other rules guests were agreeing to follow if they entered the park. Everyone had their temperature taken before being allowed in. While in the park, announcements played regularly to remind guests of the safety rules, and there were signage reminders in the parks as well. Touchless hand Sanitizers were plentiful! 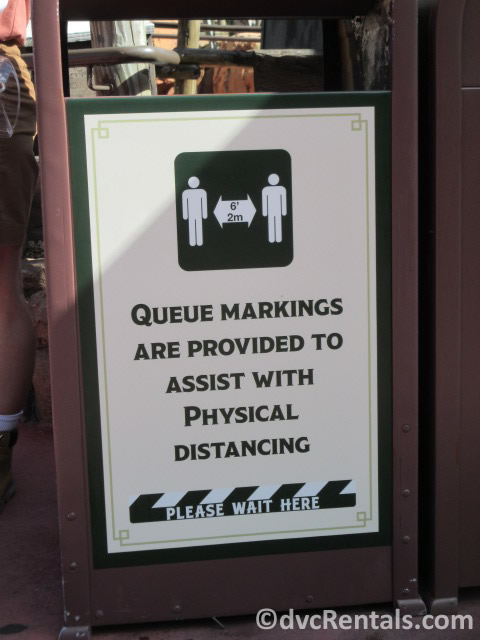 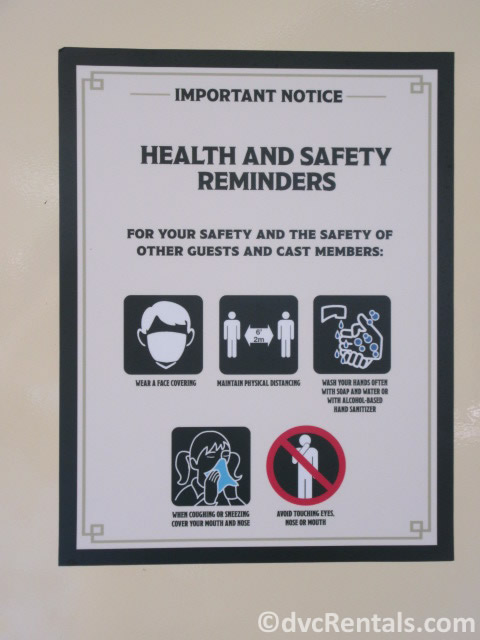 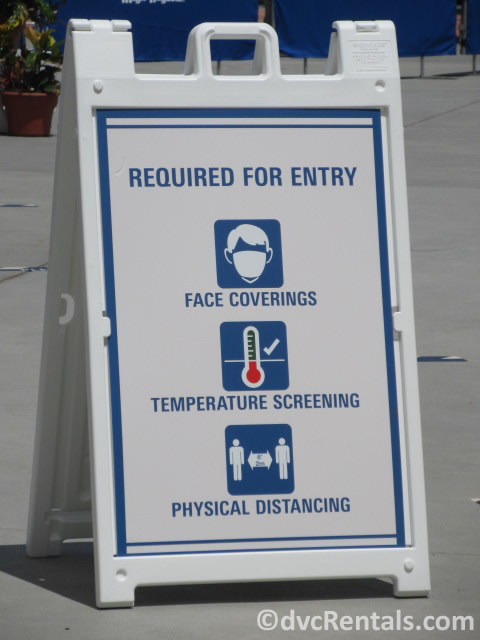 We decided to take the ferry. Side Note: If you are staying at Boulder Ridge Villas or Copper Creek Cabins & Villas at Wilderness Lodge, or Disney’s Polynesian Villas & Bungalows the boats to and from the Magic Kingdom from those resorts were running when I was there. Things are constantly changing lately, so they may add or delete boat routes as time goes on. 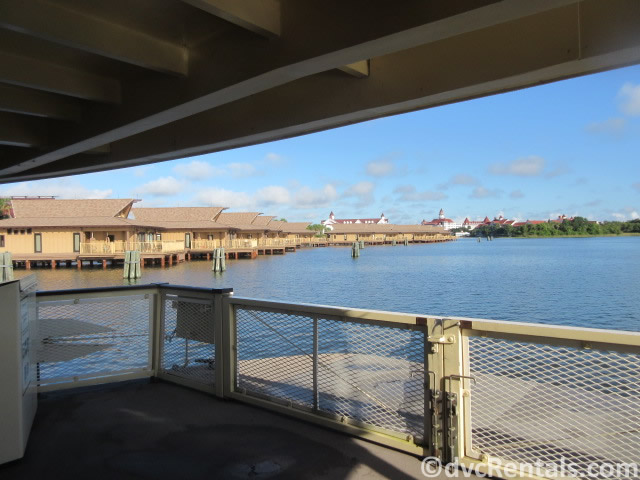 There were three ferries running to the Magic Kingdom. They all had distance markers on them to show guests where to stand in relation to others. People were wearing masks and following distancing rules. The entire ferry had no more than 30 guests, and that was only because it was park opening. On the way home at noon, we had 5 other guests on the boat with us, and the arriving ferry had about ten people unloading to go to the Magic Kingdom. It is noticeably warmer in the afternoon in Florida in July, and it feels hotter with a mask on, so we got there first thing. 30 guests spaced apart on a huge Ferry did not feel uncomfortable at all. 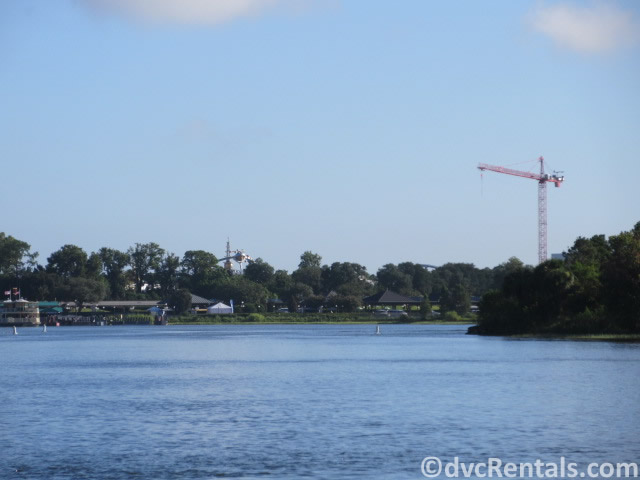 We arrived, entered (no need to use the finger scan, just your magic band will get you in), and I was happily surprised to see there were characters and colorfully costumed Cast Members on the park side of the Railroad station. They smiled and waved and welcomed us to the Magic Kingdom. Unlike Epcot, where I felt the magic was spread a little thin, it seems they tried really hard to pump up the magic here. 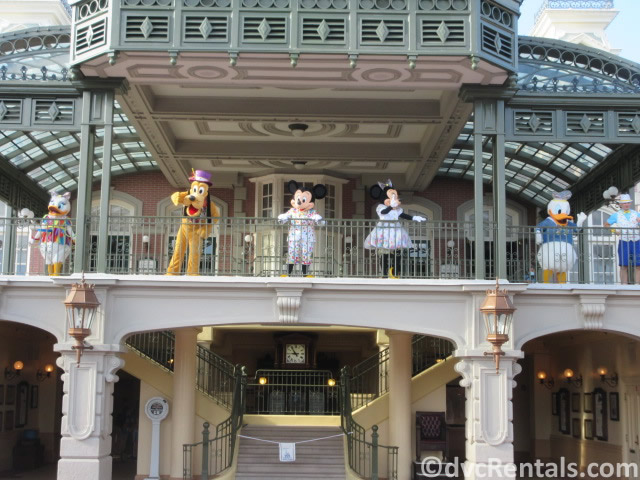 I saw lots of waving, friendly Cast Members. There were no true parades (to avoid crowds being too close together), but in a number of spots, either a single character or a small cavalcade of characters would pass by. I saw a float with Tinkerbell, and one with Mickey and Minnie in the front, and Donald and Daisy in the back. I did not see this (wish I did!), but there is also a float with Aladdin, Mary Poppins and Alice in Wonderland. I also missed seeing Eeyore and Piglet on the Main Street Trolley, and the Royal Princess processional on Main Street with Merida on her horse, followed by floats with Rapunzel, Tiana, Belle, Ariel, Elena, Jasmine, Cinderella, and Snow White. They move by quickly to avoid crowds forming, but smile and wave happily at guests along the route. 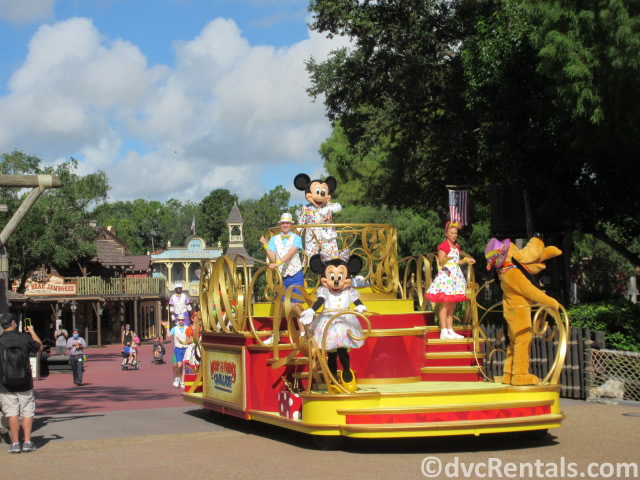 Meet and Greets are gone for the time being, but you CAN see characters in other places besides those mentioned above (please note not all of the characters are out all of the time). The step-sisters, Drizella and Anastasia, wave to guests from a high balcony in the rear of the Cinderella Castle. Buzz and Stitch can be seen on the Rockettower Plaza Stage in Tomorrowland. Country Bears welcome guests from rooftop locations in Frontierland, while Chip and Dale raft around the Rivers of America. 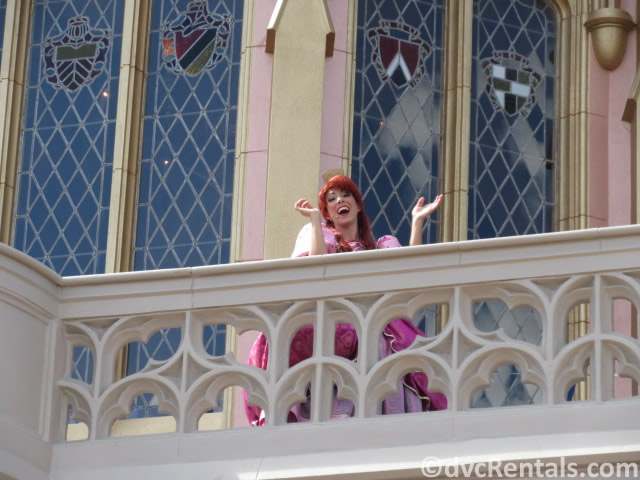 This visit was my first look at the new colors on the Cinderella Castle. I think they did a nice job; I especially like the new deeper blue on the turrets, and I am glad they left the bottom grey. I will miss the old look, but the new one is very pretty. I was a little disappointed to see that the castle moat was still drained, yet hopefully, it’ll be filled soon. 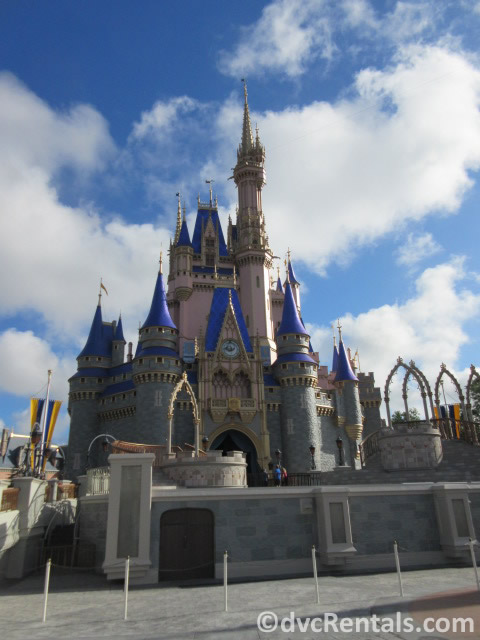 The stores had their entrances and exits clearly marked, and guests were following the directions. The Emporium (the big store on Main Street U.S.A) only had a few of its doors open; usually, there are quite a few ways to enter and exit. If you were paying for merchandise, there were lines marked clearly on the floor to keep guests 6 feet apart. Some stores in the park were closed because they were too small to allow for proper distancing. The same held true for some restaurants, such as Casey’s Corner on Main Street.

What else is currently different now that Disney has reopened? Here is a list of what I noticed, please note it is not all-inclusive (and remember, things are constantly in a state of change, so what is open today could be closed tomorrow and vice versa).

Not available when I was, there were the following: 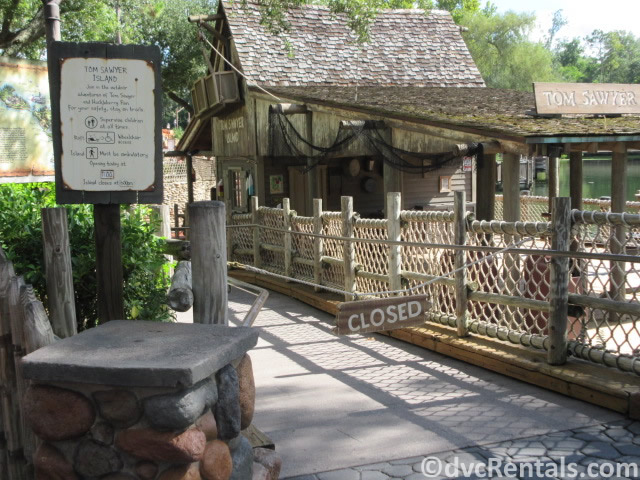 On the plus side, Mr. Toad has been moved to a more visible spot in the animal at the exit to the Haunted Mansion and there were plenty of Photopass Photographers, and lines for them were non-existent.

Of course, the biggest plus was how empty the park was and how short the wait times were! 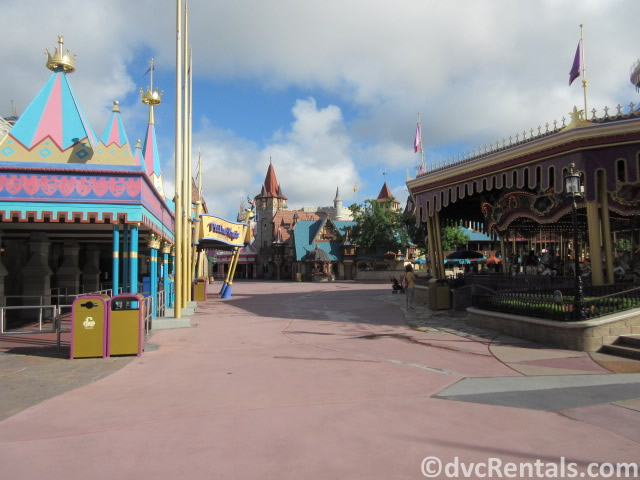 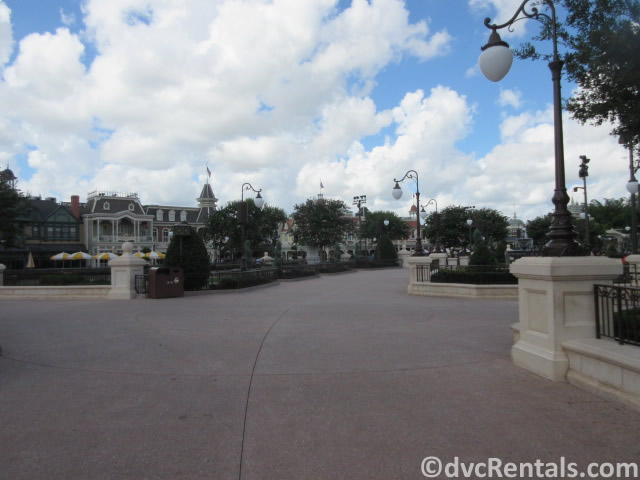 Most, if not all, of you, reading this know you need a reservation to go to any of the Disney Parks now. Disney is limiting the number of guests allowed in per day; estimates are the parks are currently at about 30% capacity (this is subject to change). 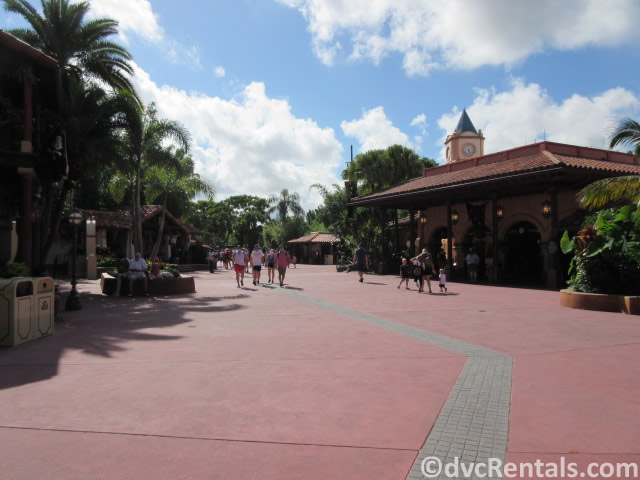 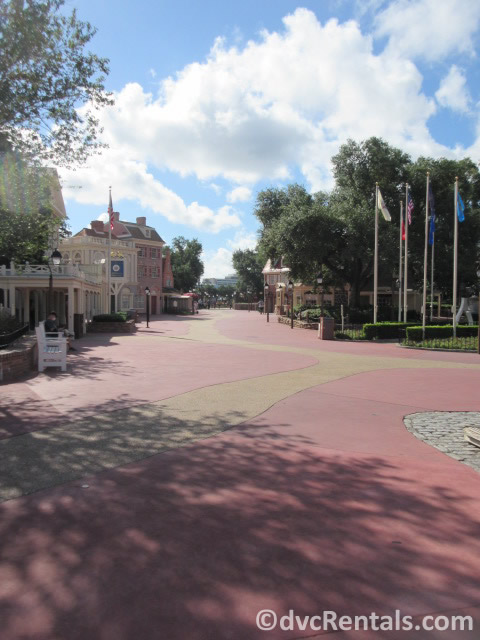 I saw 5 minutes for Big Thunder Mountain, and 15 minutes for Splash Mountain. The longest wait time I noticed was for the Mine Train, 30 minutes. 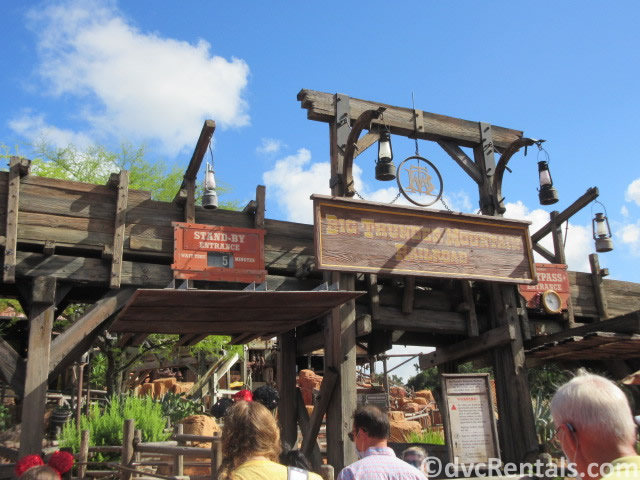 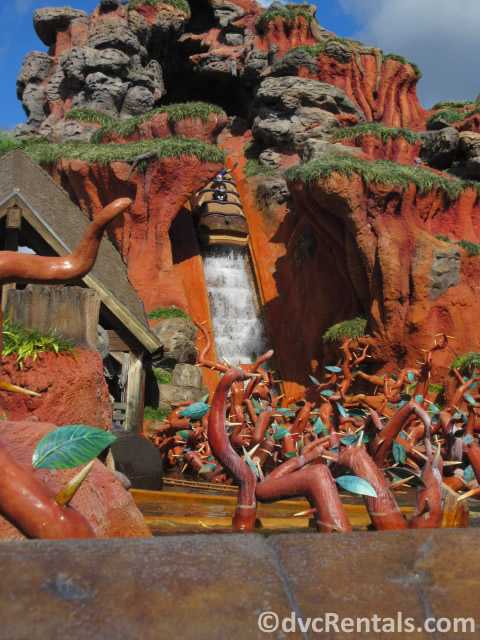 Both my friend and I love the Haunted Mansion, and we rode it three times in a row with no wait at all. Cosmic Rays and the other quick restaurants that were open were nearly empty. Most of the full-service restaurants were open, click here for a complete list: https://disneyworld.disney.go.com/dining/#/reservations-accepted.

The Cast Members all wore masks, and most also wore face shields. Guests I saw were all very compliant with safety rules, and in spite of it being a different experience than usual, most seemed to be enjoying themselves. I know my friend, and I did. I felt no anxiety about being at the Magic Kingdom. I have to say they have done a wonderful job making guests feel comfortable at the Disney parks! 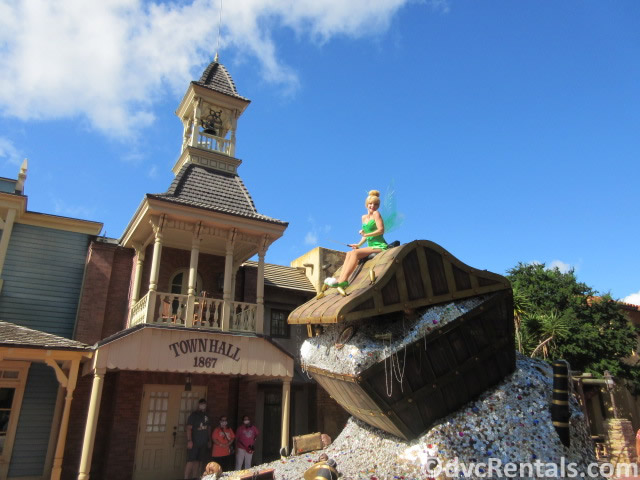